A decade ago, if you went on a trek in the Himalayas, catholes were used to dispose of human waste on all trails. With more people taking up trekking, the practice of digging shallow toilet pits (one pit for a batch of 15-20 trekkers) became common practice.

More recently, deeper pits (one or two pits for an entire season- aka 1000 to 1500 trekkers) are being dug on many of the popular Himalayan trails.

Proponents of the deep pit method argue that it is the sensible way to handle increasing crowds on trails. There are three reasons they cite:

Using carbon accelerators, like cocopeat and sawdust, further speeds up the decomposition process.

This explanation, however, has not convinced officials, local authorities and trekkers alike. Everyone is disturbed and distressed by what looks like an alarming trend in high altitude trekking in India.

As a result, there are varied arguments floating around on the internet right now.

Clearly, the problem has been growing deeper and larger with time. Pun intended. 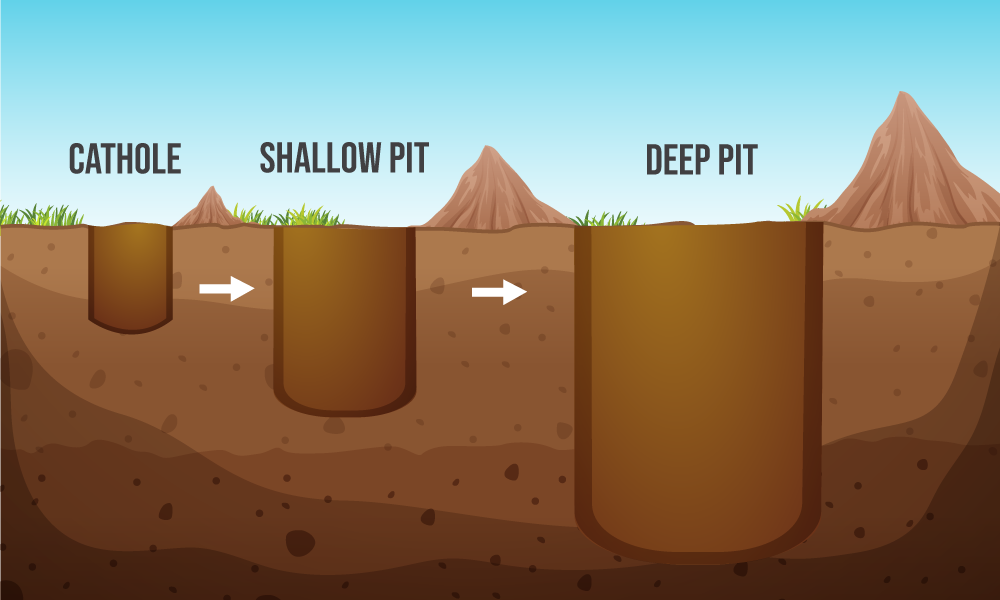 So, at Bikat Adventures, we took it upon ourselves to research and find out which system is better: Deep pits or Shallow pits?

And this is the conclusion we have arrived at:

Deep toilet pits merely hide the problem of Over-Crowding on High Altitude Himalayan Treks. They do not solve it.

We argue Why below.

Contrary to what has been claimed, deep toilet pits do not decompose faster than shallow pits.

To understand this, we need to expand a little on the basics of composting.

For those who are new to composting, there are two types of composting processes.

The first is cold composting.

In cold composting, you let nature take its course with minimal intervention from your end. Anything that is organic (like poop) is eventually broken down by nature. Shallow toilet pits and catholes employ this method.

The composting process in these pits is largely anaerobic. This means the organic matter is broken by micro-organisms that do not need oxygen to survive.

In this method, you try and speed up the decomposition process with regular intervention from your end. This is done by facilitating a healthy environment for aerobic micro-organisms (need oxygen to survive). These micro-organisms break down the waste faster than anaerobic ones.

But much like humans, they need the right balance of carbon, nitrogen, oxygen and water to survive. 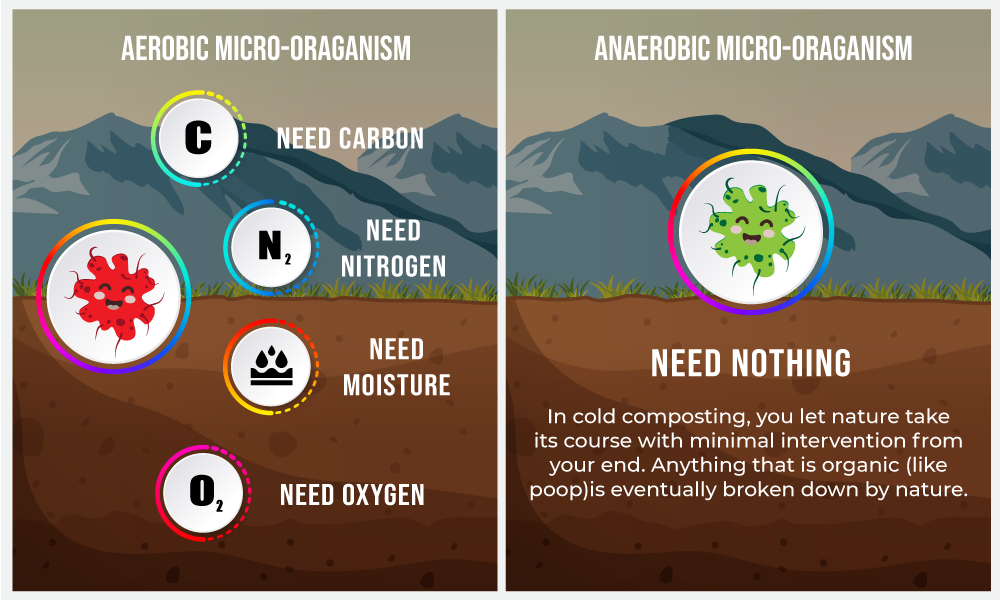 So, how is the right environment facilitated in hot composting?

Accelerators like cocopeat and sawdust (rich carbon sources and excellent absorbers of moisture) take care of the carbon-nitrogen ratio and water requirements.

The only thing remaining is providing these micro-organisms with oxygen.

This is usually done by turning over or mixing the waste regularly to facilitate circulation of air through it.

Ask any successful composter and they will tell you that this is THE MOST CRUCIAL STEP in hot composting. Without this, the micro-organisms that speed up the composting process die. 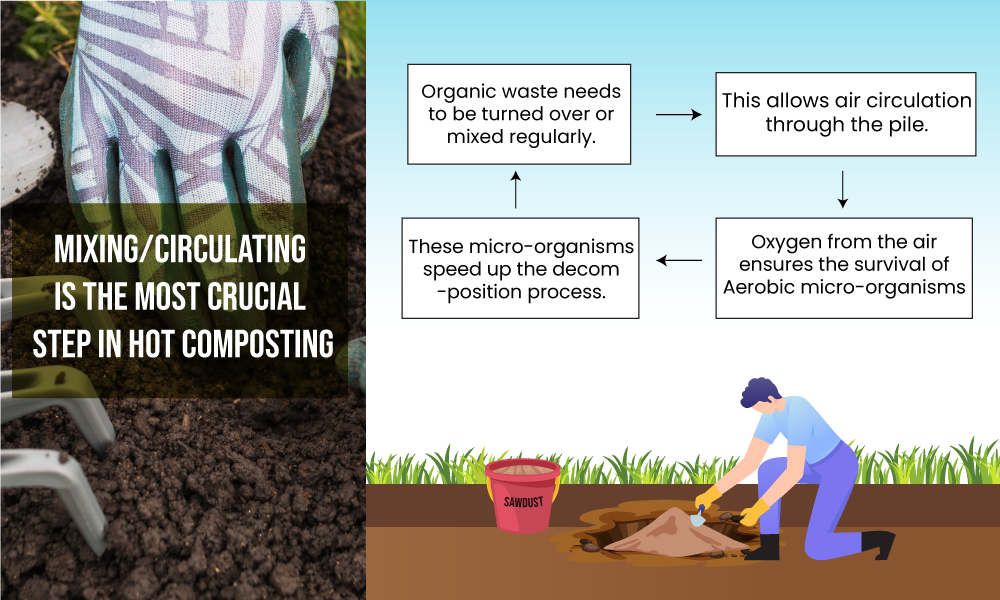 Note: When the composting pile is small, some people facilitate circulation of air by inserting sticks and tubes into the pile. When it is large, sticks and tubes are not effective. The mixing of organic waste has to be done manually.

Now, getting to the deep toilet pits:

Unless there is a person stationed at each campsite after the trekking season is over to regularly turn over the poop in the deep pits, the aerobic micro-organisms that speed up composting are not going to survive. 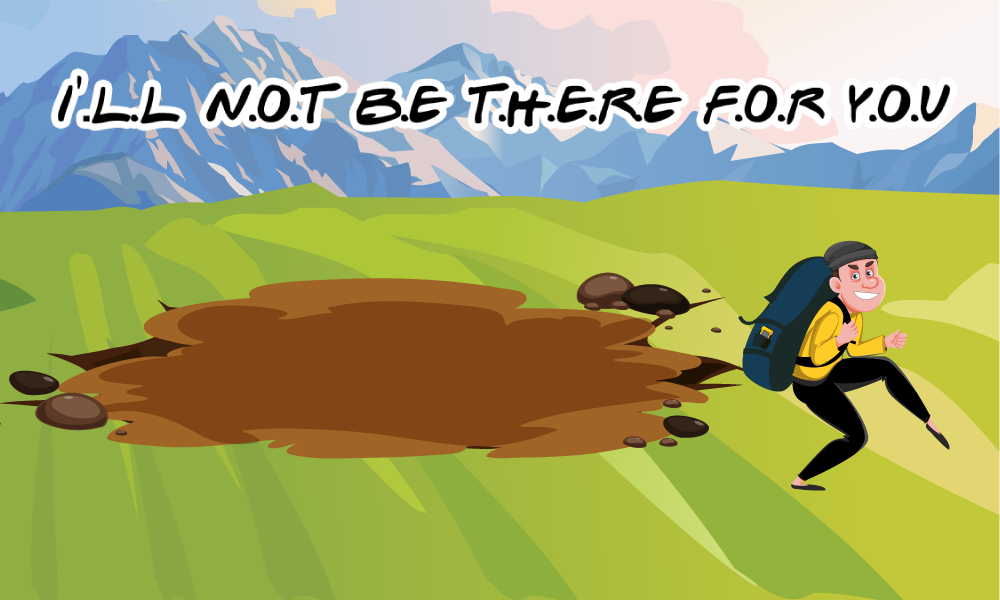 Without these aerobic micro-organisms, addition of coco-peat and sawdust are going to have no impact on how fast decomposition occurs.

the poop accumulated from 1000-1500 trekkers over the span of an entire trekking season is going to take the same time as shallow pits or longer to decompose (aka anaerobic cold composting).

But, what about heat? Don’t deeper pits retain more heat than shallow pits? This could speed up decomposition.

Contrary to what has been claimed, deep pits do not retain more heat than shallow pits at high altitude. On high altitude treks where the temperatures drop significantly, heat is lost irrespective of the size of the pit.

In the West, this is the main reason why waste is flown out from the mountains to the cities for treatment.

“In some cases, it makes most sense to just transport the solid waste to a water treatment plant, even if it hasn't had a chance to decompose. That's what they do at Mount Rainier National Park, said Richard Lechleitner, a maintenance worker who manages several urine-diverting conveyor belt toilets at the park's high-altitude sites. The area's high use, cold temperatures, and several other factors make it impractical to try to compost the waste, he said.”

Which brings us to our conclusion:

Deep Toilet Pits ONLY HIDE the mess generated on over-crowded trails. They neither clean it nor solve the problem of over-crowding. 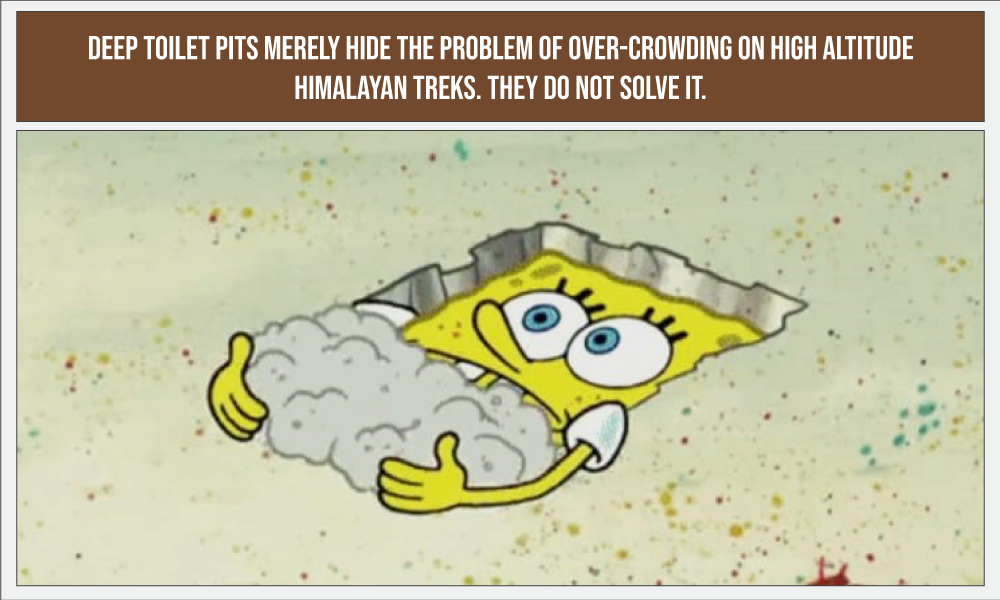 Shallow pits arose out of a need for privacy. When Himalayan trails started attracting more and more trekkers, it became awkward to poop in the open with catholes. There were greater chances of stumbling upon a fellow trekker.

Raising a toilet tent with one cathole for each trekker to facilitate privacy was an infeasible option. So toilet tents with shallow pits were established. The important point to note here is that- at no point were shallow pits portrayed as an eco-friendly alternative to catholes.

And the danger of the Deep Toilet Pit in the Himalayas lies right there; in the lie being spun around it.

- Deep pits are not eco-friendly when compared to shallow pits.

- At high altitudes, they do not retain more heat.

- Without regular mixing of the waste, deep pits do not decompose faster than shallow pits. 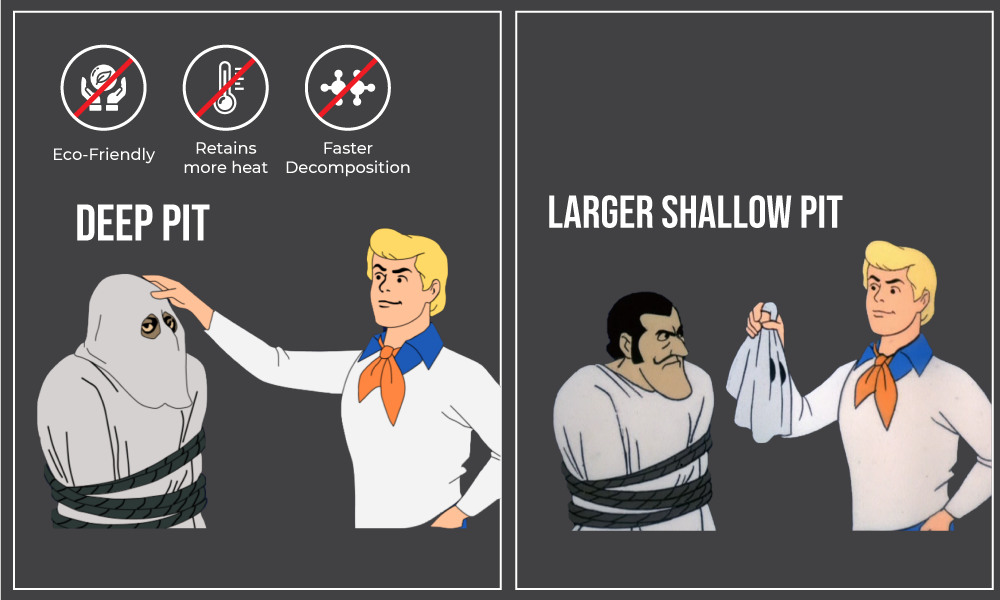 In fact if you think about it, all that a deep toilet pit does is facilitate practices that are terrible for the Himalayan eco-system.

Read: 7 Reasons why Fixed Camping should be banned in the Himalayas.

So, what is the solution to human waste management on popular high altitude treks in India?

Let us take a look at what is the practice in high-altitude regions worldwide.

In US, UK and Australia: composting toilets are installed by government bodies at all designated campsites in the mountains.

Note: Composting Toilets are essentially toilet systems that speed up the decomposition of poop using aerobic composting practices (by facilitating an environment that allows aerobic micro-organisms to survive).

These toilets are common and should be used by all people visiting there (either solo or with an organisation).

How do these composting toilets work?

The human waste is collected in a deep pit and covered in a mixture of soil and saw dust (rich carbon source).

The waste collected in these pits is then manually turned over (mixed with a shovel, rake or a built in mixing device) on a regular basis by a maintainance worker stationed at every campsite. 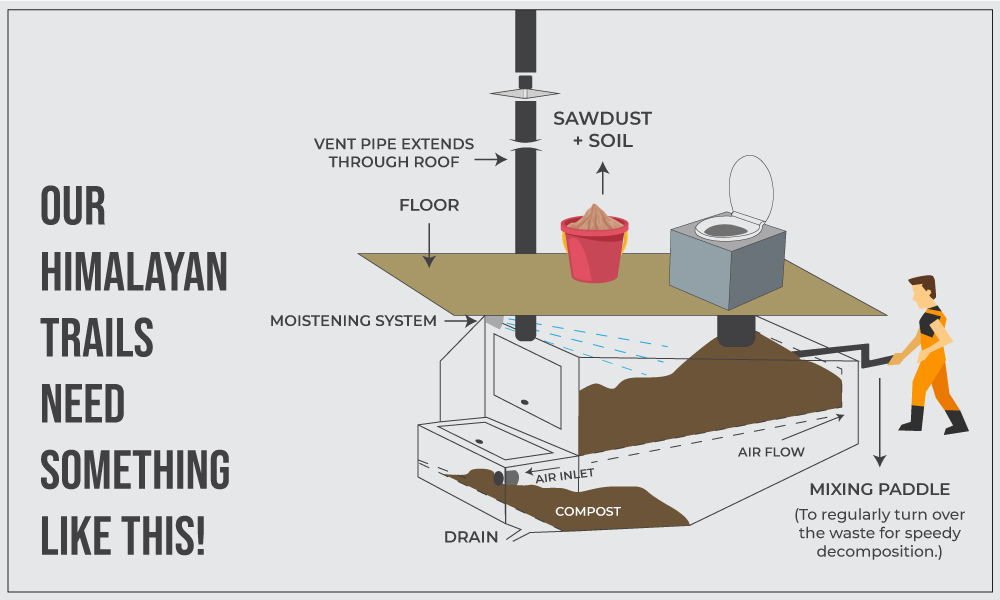 At the end of the decomposition period or the trekking season, the material is removed and transferred for further treatment.

Our popular high altitude trekking trails in the Himalayas need similar composting toilets to be set up by the government.

These toilet systems require people to be posted at every campsite to maintain them (regular mixing of the waste is an essential step to speed up the decomposition process).

At the end of the trekking season or decomposition period, this waste will need to be transported to the cities for further treatment.

And until the time the government builds these, we need trekking organisations to

Trekking organisations need to stop digging these revoltingly large and deep pits on the Himalayan Trails!