There has been a lot of debate around fixed camping within the trekking community lately. Organisations and seasoned trekkers alike have been calling for a ban of this practice on all high altitude Himalayan treks in India.

In case, you are wondering what the hue and cry is all about, here are 7 reasons why trekkers are saying ‘No’ to fixed camping in the Himalayas.

Reason 1: Fixed camping goes against the very grain and fibre of trekking 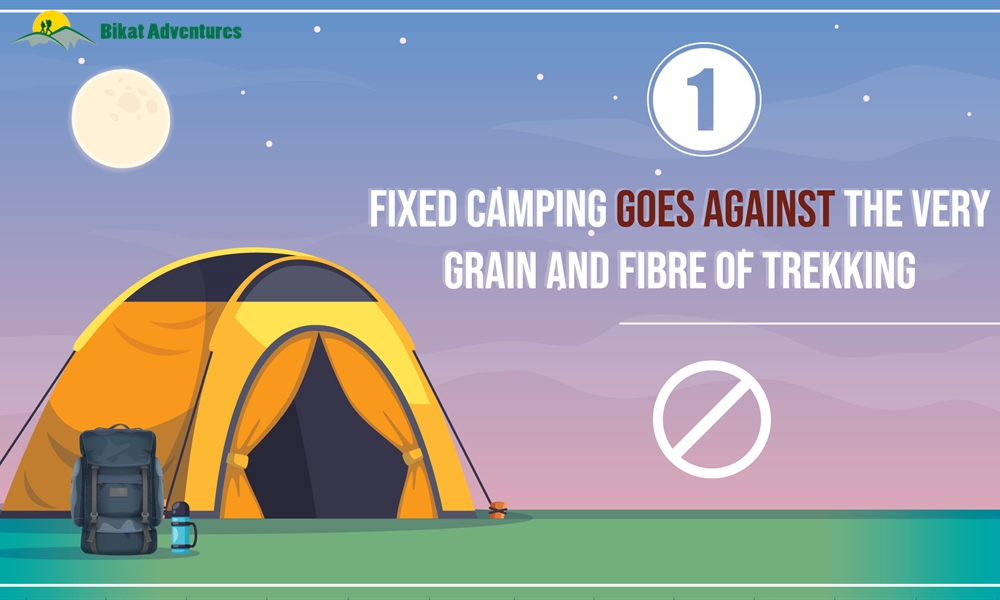 Ask any trekker and they will tell you that one of their most cherished memories on a trek is in unrolling camps for the day.

There is a fundamental and profound joy in the entire process- entering an empty campsite, setting up your stay, and rolling up the campsite the following day before resuming your trek (aka rolling camps).

On a fixed camp, your trek turns into a ‘check-in - check out’ holiday. Trekkers become mere products in an assembly line, ushered into the first campsite, and then packaged and transported to the next campsite, clearing the way for the next batch of trekkers.

To put it simply, fixed camping strips the life from trekking.

P.S: It also strips the life from mountains (discussed further in Reason no. 6).

Reason 2: Fixed Camping spoils the camping experience for other trekkers. 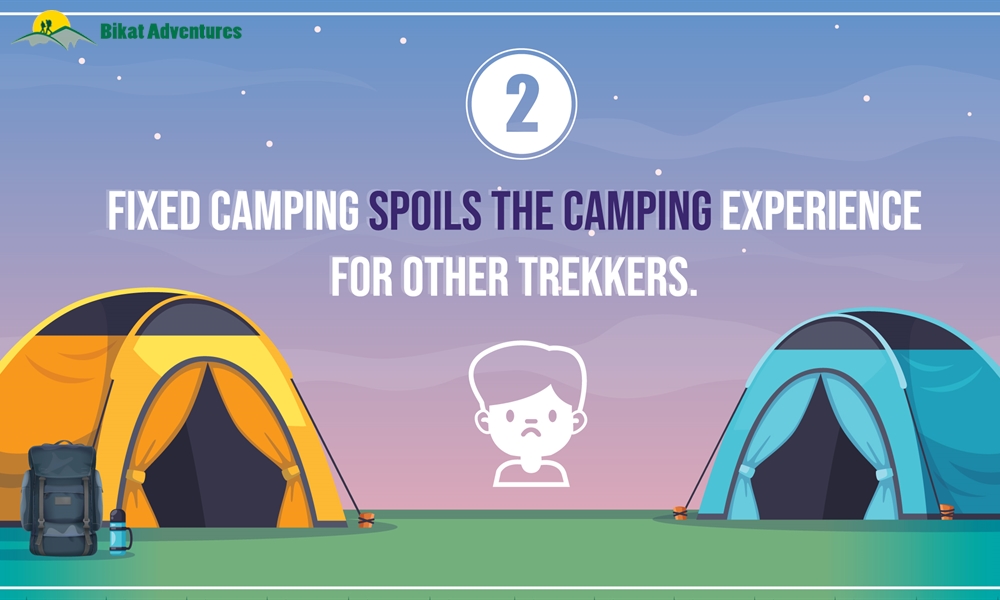 Fixed camping allows an organization to reserve the best spot (with the best views, proximity to water sources et al) at every campsite for the entire season. This practice is both selfish and inconsiderate of independent trekkers and other organizations on the trails.

On a rolling camp model, tents are pitched on a first-come-first-served basis. This allows equal say and access to all resources at a campsite throughout the season.

Reason 3- Fixed camping promotes over-crowding on select trails. It profits the company but creates losses for the environment. 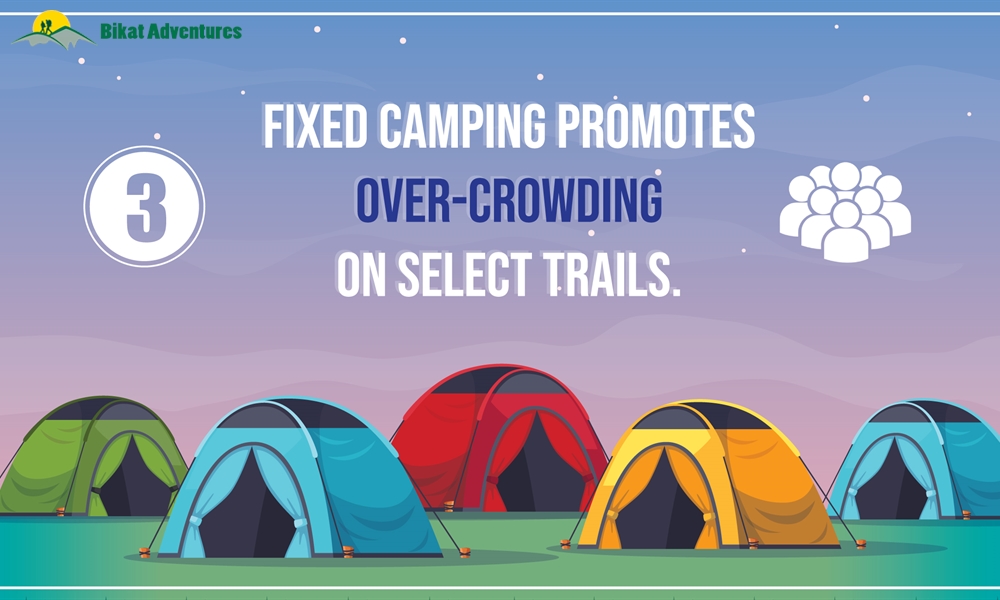 A fixed camping model is as profitable as the number of people you push into the trail each season.

The initial cost of setting up a fixed camp is high. Say, you have six camps across a trail, you will have to duplicate equipment, gear, and food ration at each campsite. If a campsite has ten tents, this means a whopping 60 tents laid out across one trail!

To break even with this cost, Operators tend to push more trekkers into these select trails. That said, this is quite a viable model from a business point of view because the marginal profits are also high.

On a rolling camp model alternatively, the marginal profits are lower. But, there is more freedom to switch between treks and offer some rest period to the ecosystems of overcrowded trails.

Reason 4: On all-season treks, fixed camping is the same as erecting permanent structures on trails. 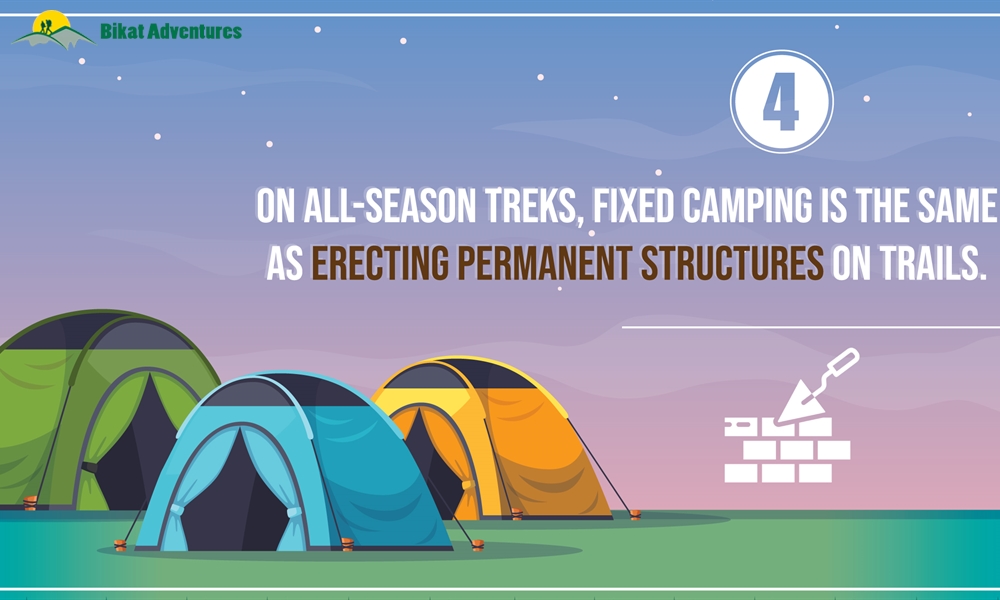 The profits from fixed camping are massive on all-season trails; but so is the destruction wreaked on the environment.

Presently, fixed camping is legally banned in Kashmir and Ladakh. We only hope the other state governments follow suit soon. 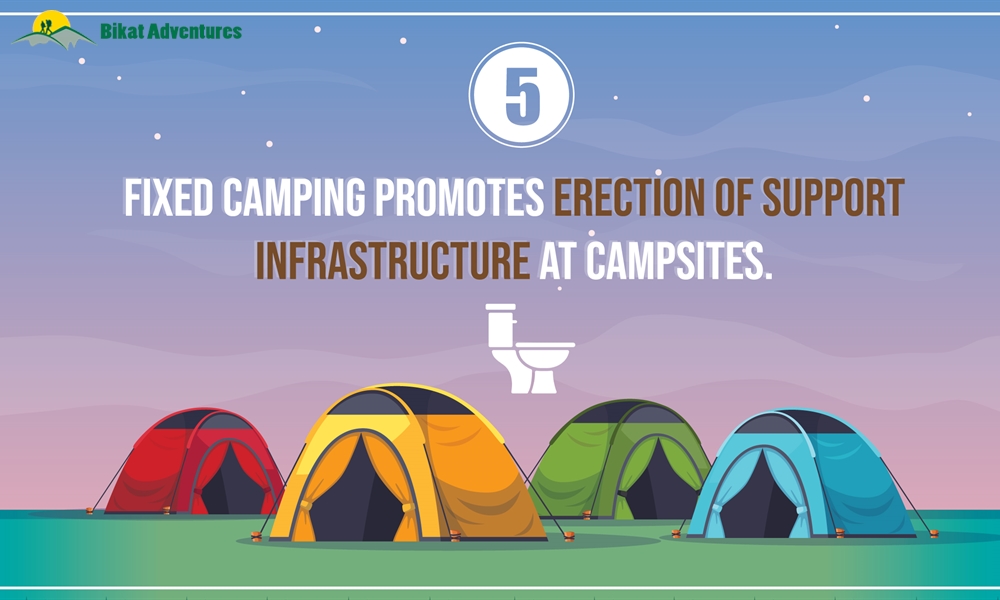 One unfortunate example of this is the Roopkund trek. Fixed camps were created and meadows were cleared to erect support structures like toilet systems on the trail.

Each year, it looked like the meadows had recovered until they just didn’t anymore- which was when Roopkund was finally banned.

This is a common phenomenon you see on trails with fixed camps.

Why does this happen?

Reason 6: Fixed Camping is no friend of the Environment 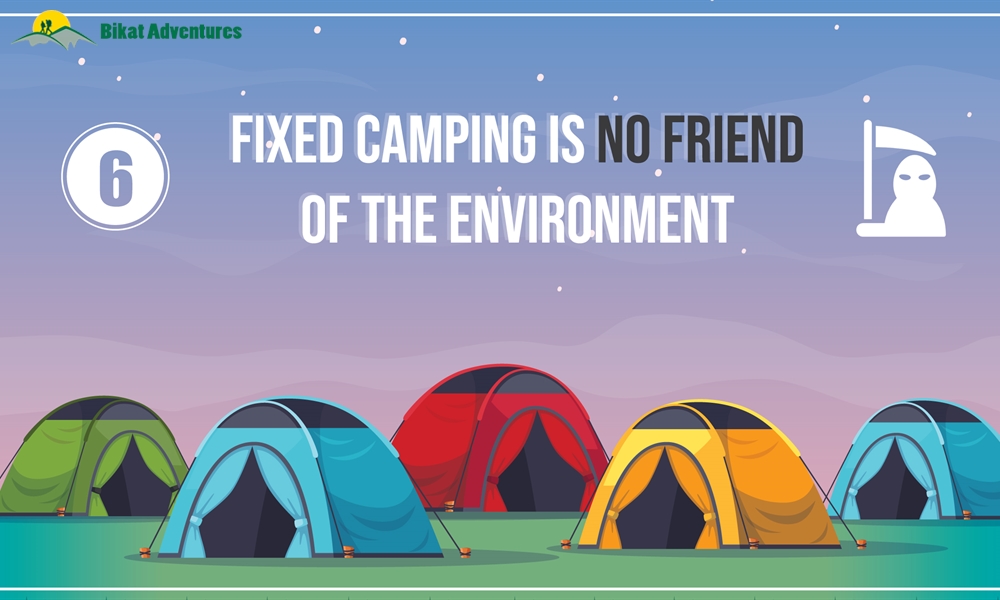 In fixed camping, the vegetation underneath the tent area is stunted in growth. It does not have exposure to sunlight and has no space to grow for the duration of the trekking season (which also happens to coincide with the growing season for many plants in the Himalayas).

Following this, the vegetation under fixed tents undergoes a significant reduction in plant height, stem length and leaf area when compared to the vegetation outside of the tent areas at the same campsite.

Lack of sunlight, reduced height and smaller leaf area decrease the photosynthetic area of plants. This causes these plants to draw from their carbohydrate reserves to survive the 4-5 months of fixed camping.

As a result, some of the fragile plant species are killed in the fixed camping areas. Following this, the more resistant species take over these areas, growing in abundance due to a lack of competition (survival of the fittest).

The meadows of Roopkund may have looked full and green from year after year of fixed camping- but the balance in the eco-system of the meadows was getting imperceptibly altered- eventually calling for the trek to be banned.

Note: This is the reason why fixed camping is not practiced anywhere in the world.

There are designated areas for camping in all national parks.

This is done to keep the envrironmental impacts of camping concentrated to a small area.

But fixed camping is not practiced anywhere.

Reason 7: There is a constant load on the environment in fixed camping. 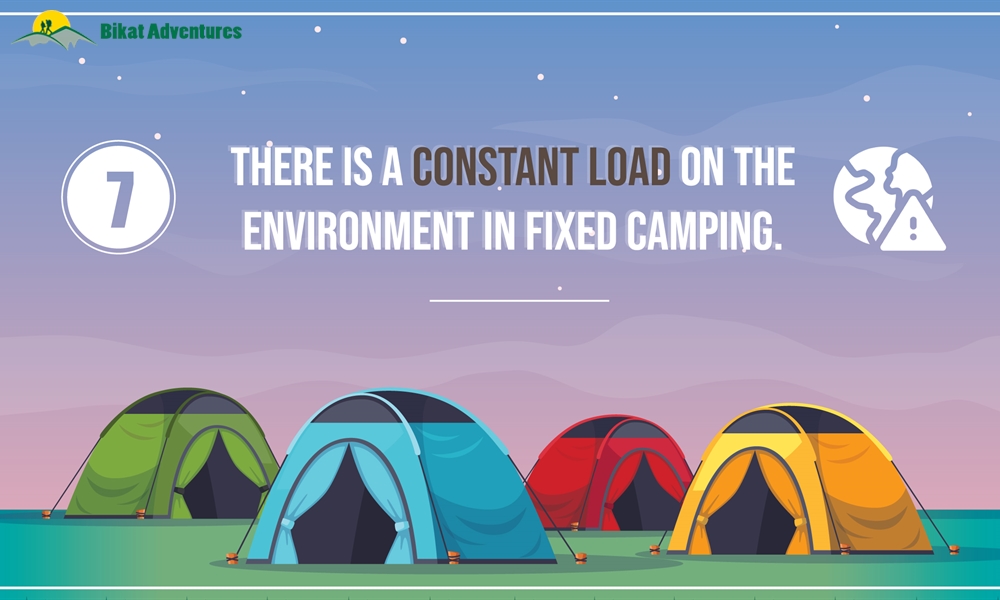 This trampling effect is asymmetrically high when you are setting up fixed camps. Since the equipment, gear and food ration need to be duplicated at every campsite, more manpower and mules are needed to set up fixed camps.

One could argue that the resources used for every consecutive batch thereafter are lower once the camps are fixed.

But at what cost is this achieved?

Once the camps are fixed, people need to be posted at every campsite to manage the camps. This adds a constant load to the environment.

Secondly, Operators have a tendency to push more crowds into the trail to break even with fixed camping costs.

Say, 1000 trekkers trek with an Operator in a month. On a rolling camp model, there is freedom to branch these 1000 trekkers into 10 different trails- the marginal profits are lower, it is easier to break even, the trampling effect on each trail is lower.

On a fixed camp model, these 1000 trekkers will need to be focused into 4 existing trails to break even. The marginal profits are so much higher and the trampling effect on each trail is higher as well!

So, what should be done?

If we were to pick between rolling camps and fixed camps, rolling camp is not only far superior but is also a much needed option.

In this day and age, where more and more people are taking up trekking, we need organisations that use rolling camp models, introduce more trails into their range of products and branch out the crowd into multiple trails.

Fixed camping, that way, is simply not worth the ethical and environmental trauma inflicted on independent trekkers, organisations and the environment.