Nag Tibba trek, at 3000 metres, is the ideal destination for people looking to escape the cities for an adventurous weekend amidst the mountains. Close to the queen of hills- Mussoorie, Nag Tibba is one of those rare trails that packs all the thrills of a week-long Himalayan trek into three days.

Picturesque views of the Himalayan mountains, camping under starlit skies, walks through dreamy forests full of oaks and rhododendrons, a gruelling ascent through snow packed trails leading to an outstanding summit view of a range of well known Himalayan Peaks, are only some of the attractions that make the Nag Tibba trek special. 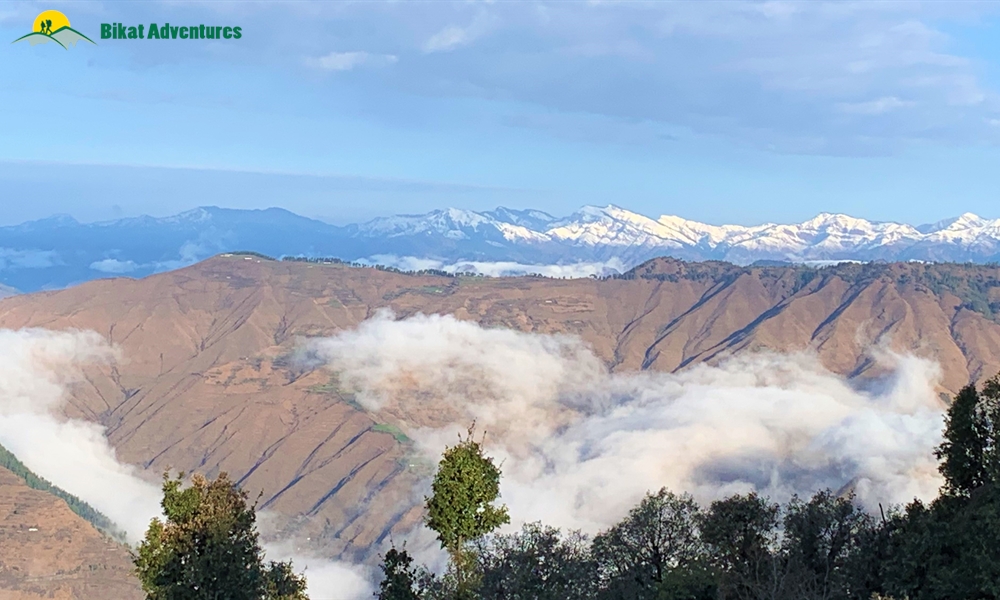 In this article, we list out the various highlights of the Nag Tibba Trek one should look out for when on the trail.

Highlight 1: A scenic drive from Dehradun to Pantwari

Thanks to its proximity to Mussoorie, the joys of the Nag Tibba trek begin right from the journey to the base camp. The 90 km long drive from Dehradun to the Pantwari village passes through some of the loveliest countryside vistas that India has to offer. The mountain roads here are long and serpentine with sharp curves that open up to gaping views of the valley below.

The drive takes around 3-4 hours to cover, gaining an altitude of 1400 M.Half an hour into the journey, one is treated to a photographic view of the Queen of hills –Mussoorie on the mountain rangeafar. As we draw closer to Mussoorie, the city of Doon grows smaller in the valley below. The roads in Mussoorie zigzag through expansive alpine landscapes dotted with wooden cottages on either side. The architecture here is a fascinating blend of the old and new. 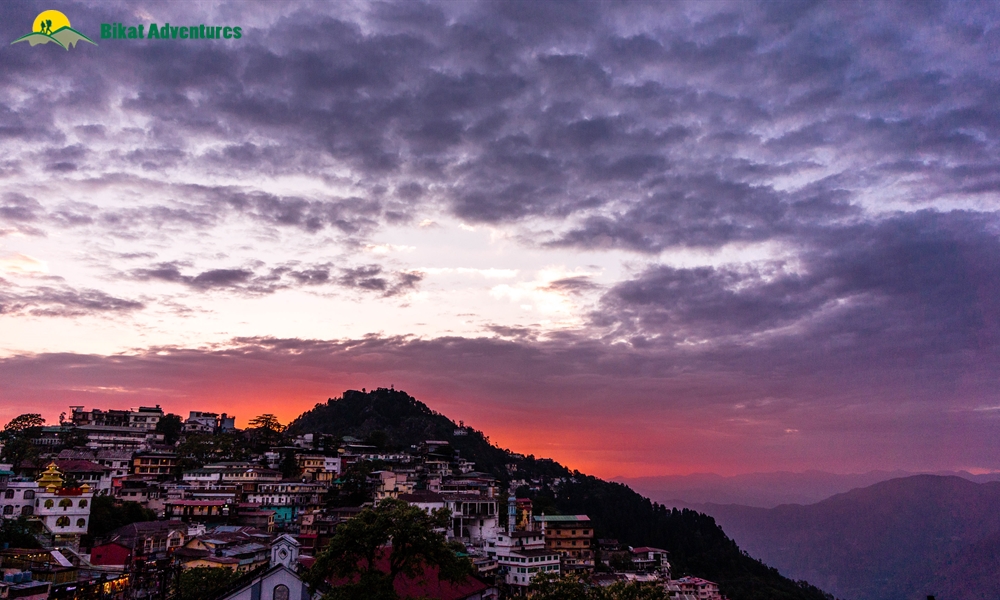 Only about 15 km ahead, you will be able to spot the infamous Kempty falls surrounded by high mountain ranges on your right. A gigantic fall that runs in a somersault of streams before hitting the bottom, it is as high as 40 feet and can be seen bustling with tourists.

Beyond this point, the landscapes transition into the serene countryside that stands in stark contrast to the commercialised setup before. The road mostly runs downhill from here with the lovely Yamuna River trailing on one side till the town of Nainbagh. 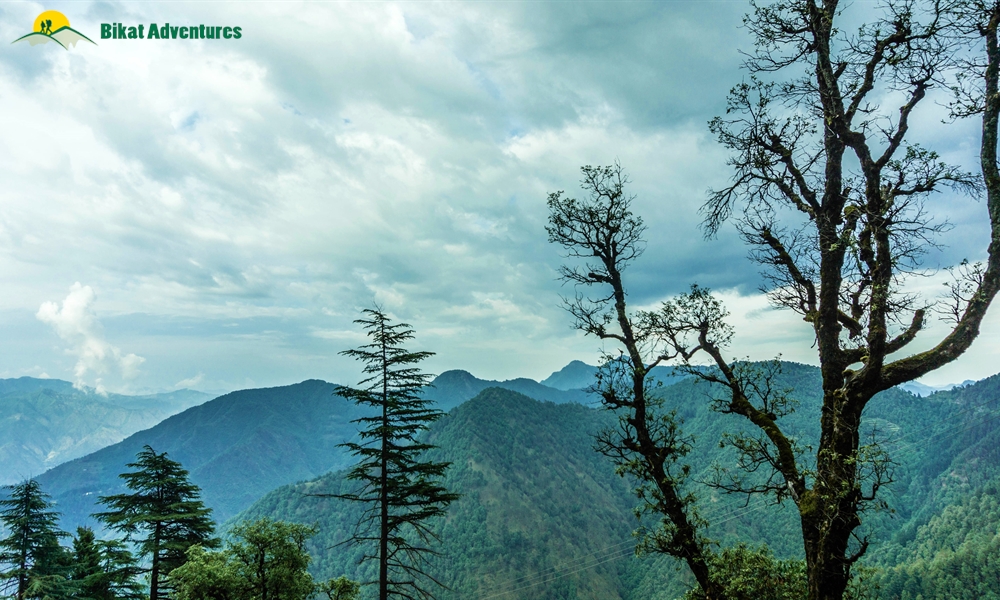 From Nainbagh, a slender road runs towards Pantwari. It passes through terraced farms and green hill slopes allowing you a sneak peek into a simple but hardworking village lifestyle in the region. The hike to the Nag Mandir campsite begins as soon as we reach Pantwari.

Highlight 2: The transforming trails from Pantwari & a dreamy walk through dense forests

Although the trail from Pantwari to the campsite is only 5.5 km long, it changes landscape a couple of times making it a delightful trekking experience. We begin the trek on a cemented path that runs out of the village of Pantwari. Beautiful step farms containing rice, corn, potatoes, mustard and other local vegetables line the path here. You will also come across apple orchards and walnut trees in the vicinity. The cemented path translates into rocky uneven ground after sometime. As you continue walking uphill, the views of the valley will open up to you. A few lonely huts dot the landscape here.  These are basically homes of farmers who bring their animals to graze in the region during summers.

This uneven rocky path eventually merges with a dry and dusty shepherd’s trail. By this time, civilisation that you had just left behind feels far away. You are in the thick of the mountains, the terrain is largely uninhabited and the silence of the woods engulfs you all around.

This continues for the next 1 - 1.5kms before the trail plunges into a dense forest full of Oak and Rhododendron trees. Such changing topography and vegetation all in the span of a day keeps you wondering at every step. 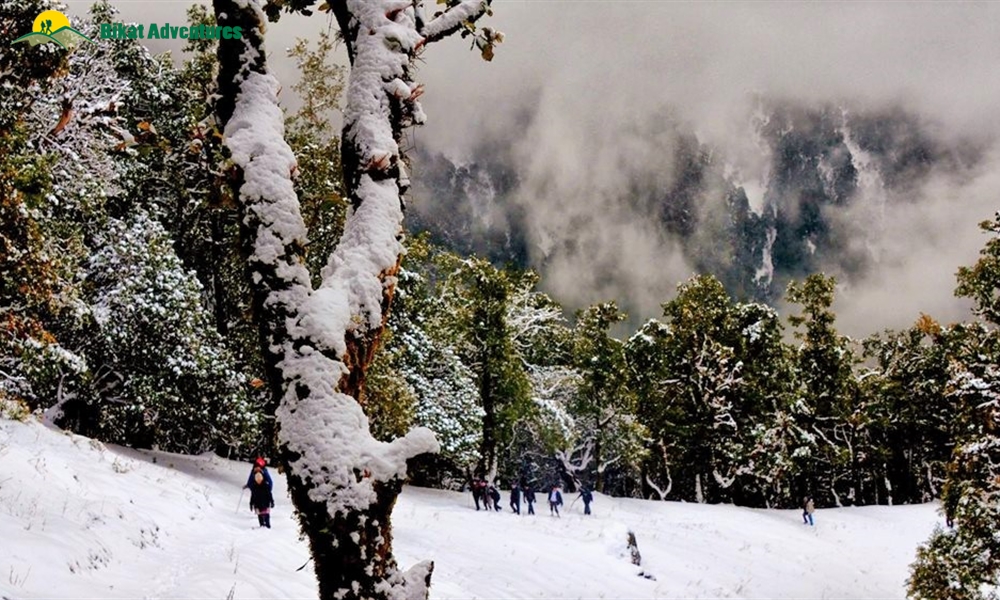 The forests here take on different looks based on the season. During the late winter and early spring season, rhododendron blooms burst forth. Even the floor of the forest is carpeted in their red and pink petals. During peak winters on the other hand, the trails are tucked in snow transforming into a winter wonderland altogether.

Because the thick canopy allows only little sunlight to fall through, the temperatures drop slightly inside the forest and the chill in the air envelopes you at all times. 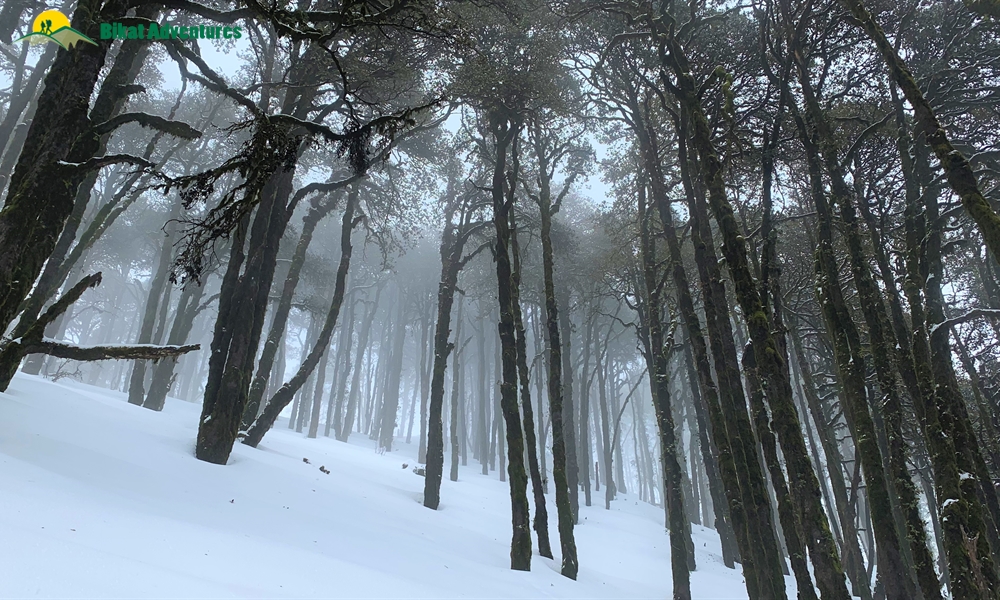 The walk through these forests is captivating with moss covered branches crisscrossing to create dense foliage overhead while slivers of golden sunlight pierce through neglected spaces in an attempt to touch the ground below.

The trail that runs through the oak and rhododendron forests eventually opens up to a wide clearing at the heart of which sits a small structure of a temple. This is the renowned Nag Mandir. This clearing is also where we will be setting up camp for the day. The Nag Mandir is a temple dedicated to the Serpent God, at an altitude of 2325 m. It is a small premise set in the backdrop of the Oak forests and is taken care of by a priest. The Nag Tibba Trek in fact gets its name from here. ‘Nag’ means ‘serpent’ and ‘tibba’ means peak.

You might encounter locals paying homage at the temple as they believe the Serpent God to be the protector of the land and cattle in the area. There is also a clearing of land near the temple where the shepherds bring their cattle to graze. Beyond the Nag Mandir, the vegetation changes noticeably with dense forests hugging the slopes once again.

When a trail packs all the thrills of a week-long Himalayan trek into a weekend, it means that there will be something new to look forward to every single moment.

The camping ground for the day is wonderfully set over a small clearing allowing you magnificent views of snow-clad Himalayan peaks set far into the horizon. 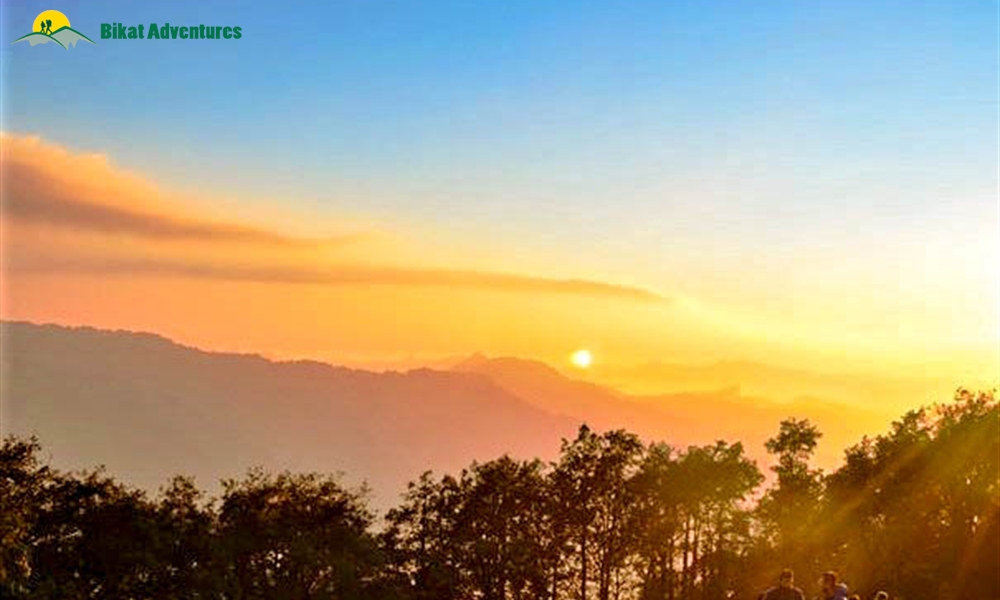 After exploring the area around the Nag Mandir, settle down with a cup of Chai to watch the sun set in the evening. The views are lovely to behold. On clear days, you can witness the mountain ranges in the horizon painted golden under the setting sun and whirls of clouds drifting amidst the peaks. Such a sight always manages to wash away the fatigue from the day’s venture.

Highlight 5: Glorious Views at the summit

The summit is undoubtedly what makes the Nag Tibba Trek special. Located at a two hours trek from the Nag Madir Campsite, the summit treats you to an outstanding view of an impressive range of snow-clad Garhwalian Peak.

The trek to the summit is steep and rugged and can be tricky to navigate especially for beginners. We begin by following the trail that climbs up out of the Nag Mandir campsite into the dense woods on the slopes above. 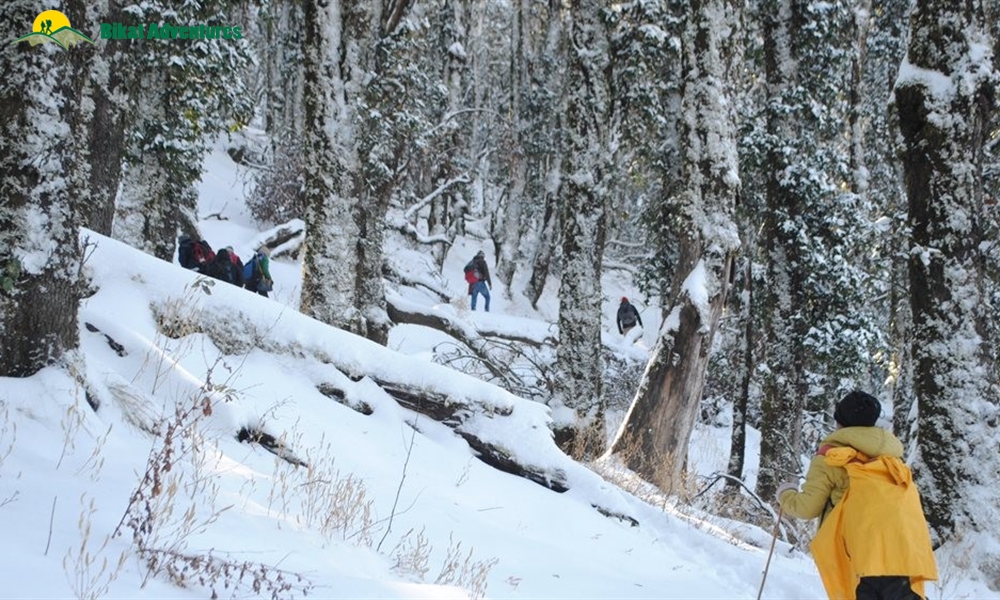 After trekking through the snow laden incline for a while, the forests retreat gradually. The trail eventually turns through a ridge leading to the incredible summit of the Nag Tibba Trek at 3022 m.

At the summit, soak in panoramic views of well-known snow-capped Himalayan peaks such as Swargarohini, Banderpoonch, Gangotri and Kala Nag amongst others. On clear days you will also be able to see the Kedarnathcrown and the snow peaks of Changabang. 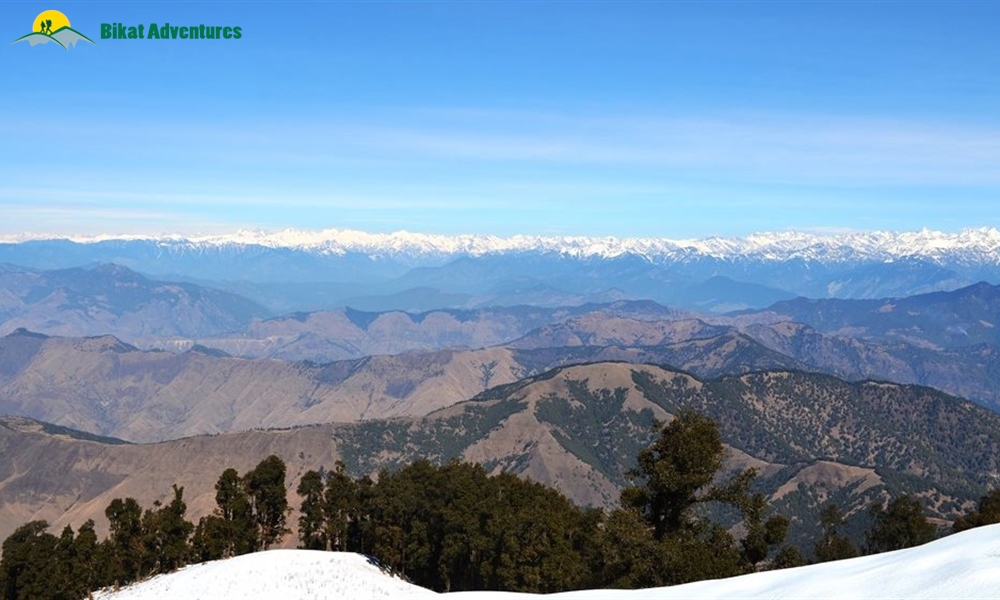 Every trekker longs for a thrilling trek and magnificent views at the summit; Nag Tibba trek rewards you with these and much more, fulfilling everyone who embarks on this journey. All in merely 2 days! 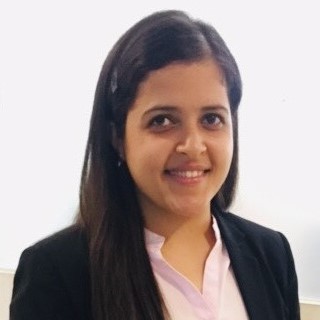