Are you missing the mountains? We sure do. To make up for not being able to travel there, we thought we would share some stories of adventures we have had in the mountains that could transport you straight to the mountains. While it may not be the same as being there in person, we hope these reads take you close enough :)

1. From Leh to Nubra with Wolves

Excerpt from the Article:

“Although I was in no mood to wake up before the sun hit our tent the next morning, my desire to stay warm was no match for Rigzin’s loud wake up calls at 7 am. I was irked.

We walked a couple of kilometres up the valley to get to the base of the pass, where the actual climb began. Although a wide, well marked trail went all the way to the summit, it was steep as far as passes in Ladakh go. We were lagging behind Rigzin and Norbu by around a hundred metres on the pass climb when we heard Rigzin cry out, ‘Wolf!’.

We turned back to see wolf after wolf come into view…” 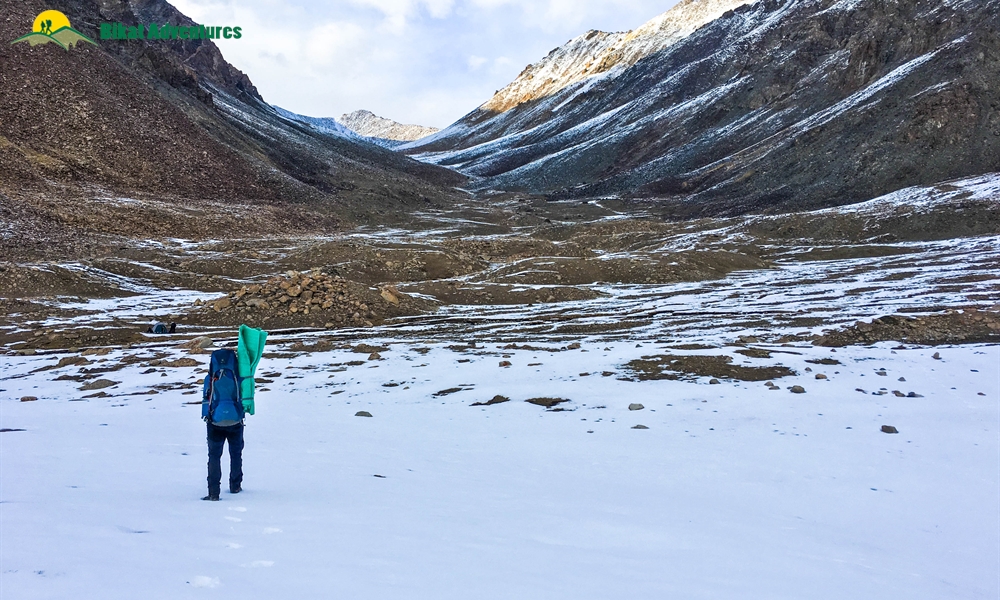 As far as plans go, there are plans and then there is what actually happens. Our Exploration Team had just flown in to Ladakh for the third time that year (2018). The plan was to leave for Kargil the next day, drive up the Suru Valley to a village with brilliant views of Nun and Kun called Panikhar, and then hike across the Bhatkol Pass to Pahalgam in Kashmir via the upper reaches of Kishtwar’s beautiful Warwan Valley. But a recent spell of heavy snowfall in the Western Himalaya had blanketed the surrounding peaks and passes under A LOT of snow.

Read on to find out how our adventure to Digar La, an 18,000 ft Pass in Ladakh panned out.

2. Raining with a chance of more rain- Cycling to the Kingdom of Tawang

“ The landscape changed to a world of snow - a single lane and icy roads meant we had to repeatedly stop and get off into the snow for oncoming traffic. The now melting snow and lack of traction had me wishing for a fat bike and my hiking shoes. The ridge on which Se La lies drops steeply towards Senge, making it impossible to see the pass before we actually reach it. As we neared it, the clouds parted to reveal the Tawang gate…” 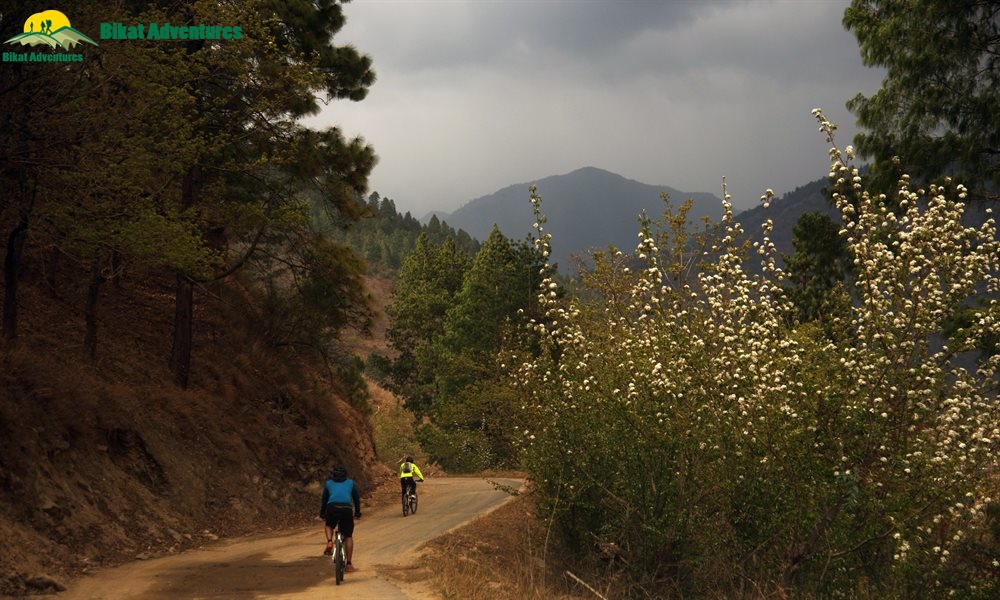 We were going to be cycling from Guwahati to Tawang and further to Bum La, in the northwestern corner of Arunachal Pradesh, close to the tri-junction of Bhutan, China and India. This was to be followed by a week long trek along the Bailey Trail, a rarely traversed trail with history of exploration by Pundit Nain Singh, Bill Tilman and the Dalai Lama.

But the Rains of Arunachal had a plan of their own. Read on to find out what happened.

“By 6 am that morning, in a matter of ten minutes, the perfect world that our trekkers had been exalting about no longer existed. The winds were fierce, the temperatures had dropped and the visibility was dismayingly low.

Staying was not an option. So, a plan was quickly put in action.

Rohit was to descend down as quickly as possible and ask the cooks to prepare some tea and hot khichdi. It was essential for each member to get something warm into their systems as soon as possible to fight the bitingly cold winds they were being exposed to.

The descent was nerve wracking to say the least. Heavy snow-fall and the cold winds had frozen sections of the rope which made it slippery to hold onto while negotiating descent. To make things worse, chunks of ice and snow were tumbling down the slope as well…” 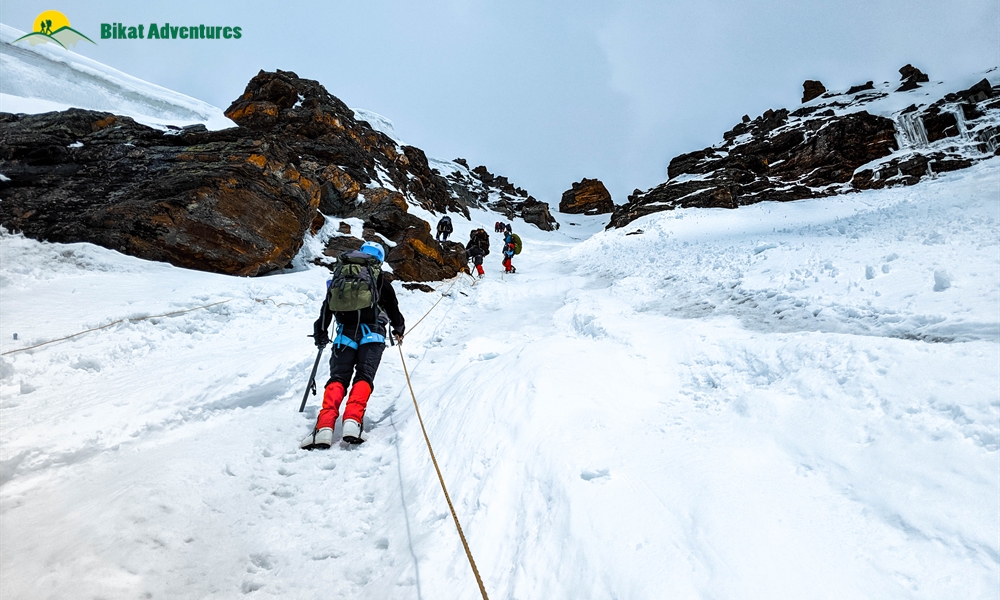 Perched at an altitude of 6001 metres in the valley of Kullu, Mt. Deo Tibba is perfect for seasoned trekkers looking to take their first step into mountaineering.  In 2019, our climbers were in for a surprise 300 metres from the summit of Mt. Deo Tibba.

Did they make it to the summit or not?

“The difference in daylight hours between seasons is starker in the mountains than the plains. Already 9:15 by the time we were leaving, Patalsu’s slopes still hid from the sunlight.

We climbed through the last of the oak forests to finally emerge above the tree line - at a broad, circular meadow at the base of the peak. The sun was finally out and about - its warmth more than welcome… But the last little piece of daylight that day was my favorite though. The sky faded from a brilliant orange to baby pink at dusk, and the forest became this wonderful quiet that you rarely find anywhere else. The summit view was astounding, but this moment in the forest still sticks in my head.” 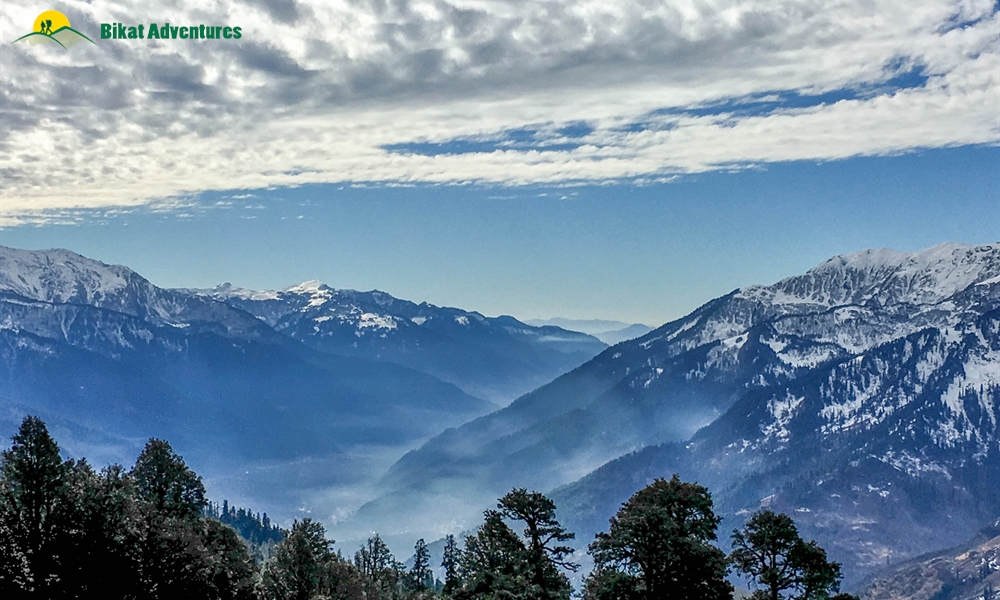 "I’m truly, consistently amazed by how many stories, legends and superstitions can be found at literally ever turn of a trail in this country. It gives everything an ethereal, supernatural feel, gives extra meaning and significance to almost everything you find and adds, as you say, masala to your travels.

With deities around every corner, pilgrimage sites atop the most remote corners of the earth and sages just outside your tent, I’ve made it a point now to ask the local guides what stories they can tell me about the trek we find ourselves on- because it’s bound to be good”. 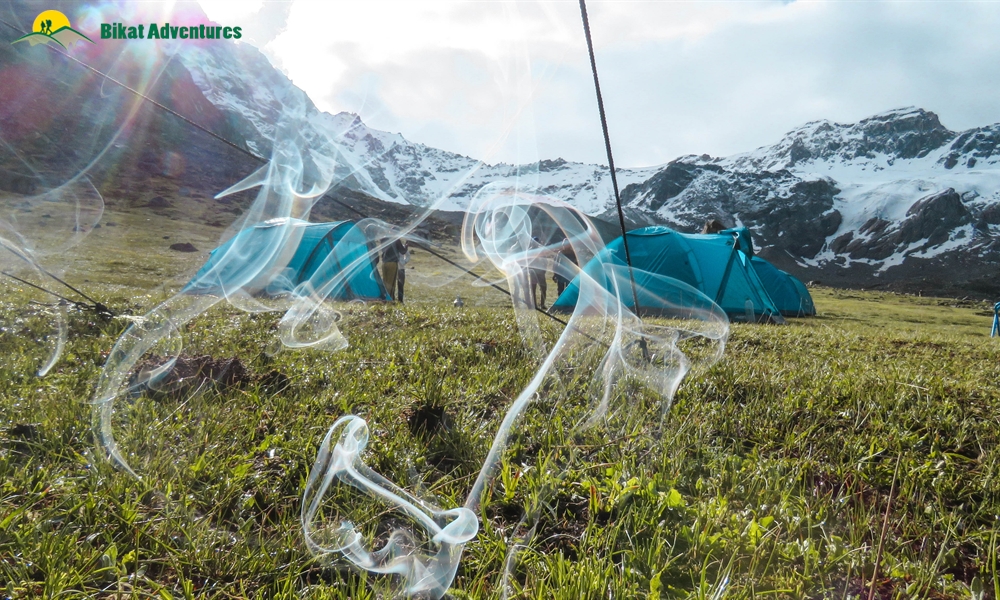 In this article, we share some legends and stories surrounding the Deo Tibba Base Camp as narrated by our local guide Chetram.

“The glacier turned into patches of steep ice slopes, precarious scree and loose boulders. Every step towards our goal felt heavier than the last, but the thrill was for real as we negotiated endless moraines.

I hoped that the pass was getting nearer, but ha-ha said the mountain and na-na said the local guide! Every time you dared to think that you’re closing in, the pass moved further and further away. The pass won every round of hide-and-seek, not becoming visible until the last second…” 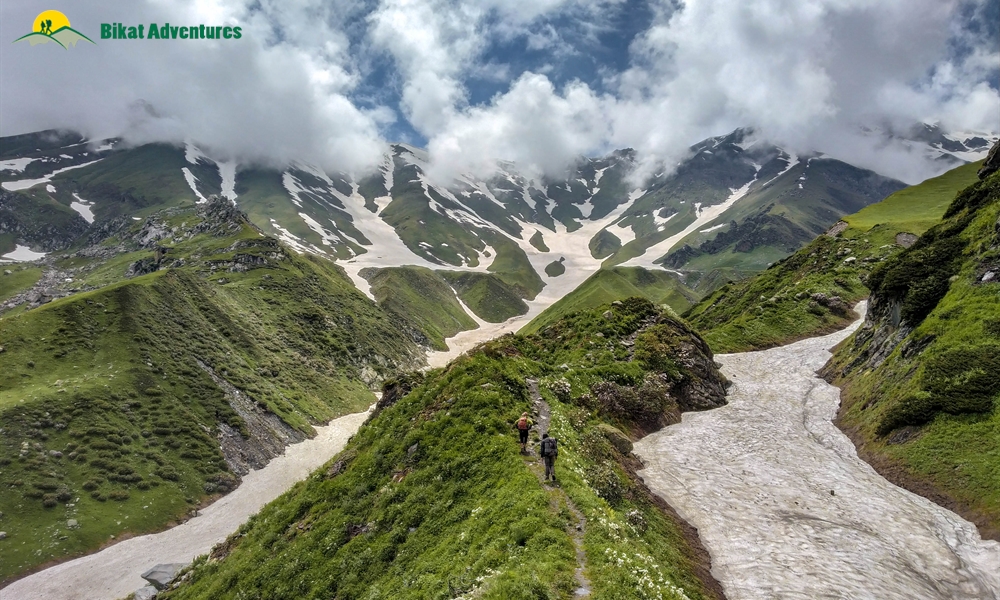 At Bikat Adventures, we encourage our team members to explore different roles, both at office and on the trails. Often your role in a group excursion can influence how you perceive the entire experience. From being a trek participant to documenting trails, Abhishaik Sud shares an insight he received from his changing roles.

7. Our Expedition to Mt. Nun

“ The team found themselves huddled together on a narrow ridge with a sharp fall of 800 metres on their left hand side, not far from where they were standing. Mingma, Dawa and Norbu Sherpa joined them here. The ridge strangely felt crowded even though it was just the seven of them standing there. Exhausted and worn out from the day’s climb, they wanted to know how much farther the campsite was.

The answer the Sherpas gave was enough to jolt them out of their debilitated states. The ridge was the campsite for the day! ” 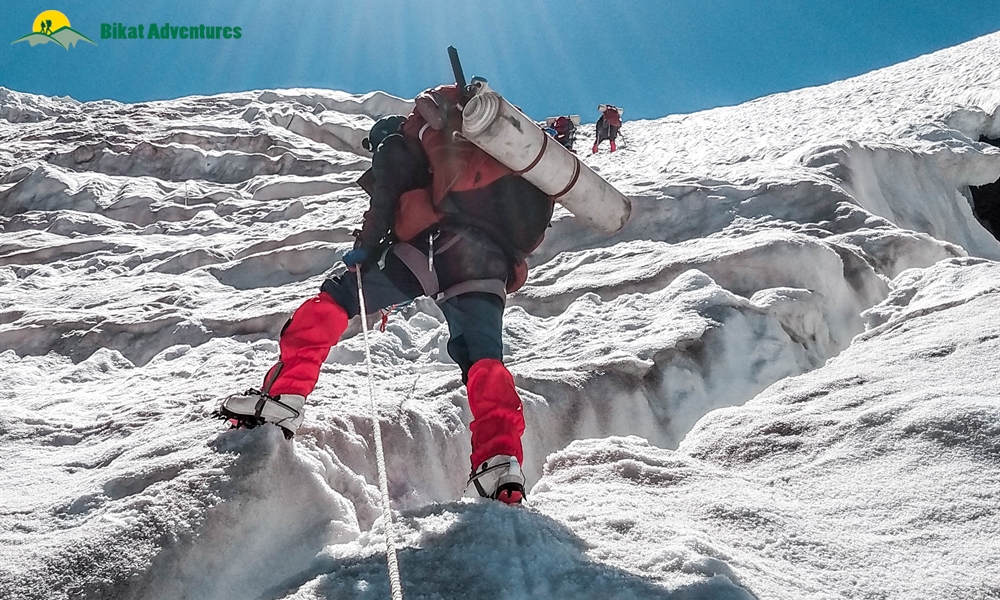 With excerpts from interviews with our four climbers, this is an inspiring story of our first successful 7k+ expedition to Mt. Nun, the highest peak in the Zanskar Range of the Himalayas.

“How do I get your esophagus to feel the same fire mine did when we hit 19,000 feet?

What can I say for your hands to shake violently with excitement and exhaustion and cold like ours did as we ravenously ate frozen-solid Snickers Bars on a glacier?

How do I make your chest swell with delight, the kind of joy that moves up your throat and makes your head tingle, as mine did when I turned around and saw the rest of the world infinitely below us?

I don’t think I can.

Who knows though? Maybe by telling you the story of our journey to this magnificent peak, you’ll feel the same desire to experience this mountain’s spell in person…” 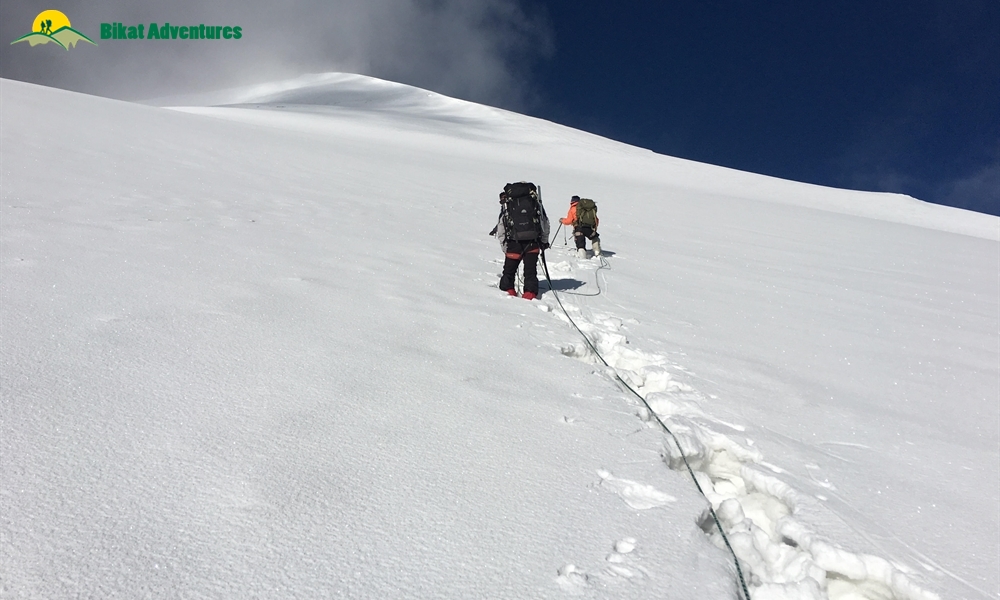 This is a captivating story of our recce to Mt. Kang Yatse II.

If you liked the collection and would like to check out some more, Part 2 of the series can be found here.