Plane to Plains - The journey is short!

Red lights on - Helmet off, goggles on, helmet on

Green Light on - Approach the open gate of the plain and take position.

The idea of jumping from a plane and landing on the ground on my own was fascinating me since 2017 but such is the life of an entrepreneur that I just could not venture till 2018. Well nothing wrong with the life actually, it was just my own inhibition that stopped me from venturing out. Isn't it hypocritical for the founder of an Adventure company to say that?

May be. Well, I have learned that sometimes the problem is not just venturing into something but also venturing out of it. When I left my job for my start-up, it was a big adventure for me but soon it caught me so tight that I found myself unable to detach. I am a strong believer in detached passion but I just could not realize. Thanks to a friend, who has probably become my coach (without the appointment of course), I realized finally! Suddenly, it all looked possible and it happened.

There were many firsts in my voyage to Australia, where I would do my jumps like first real international travel, first tourist visa, etc. but that is not the point here. So, let me take you straight to Melbourne. I hired a car for my stay in Ocean Grove, near Great Ocean Road, from Melbourne and I would highly recommend it to anyone planning to visit Australian's countryside.

The drive from Melbourne to Ocean Grove would take around 1.5 hours (110 Kms) and is quite a revelation for someone driving outside India for the first time. My diving destination at Barwon Heads Airport was on the way and I took a good look at the venue while driving past it. I was trying not to think too much today because that would unnecessarily take my sleep away. Ocean Grove was a beautiful town and the place where we stayed was easily the best house I have ever lived in. Thanks to a friend (Jane), we (Me & Shayoni) felt really privileged to live there.

I left home early morning to reach the office of my diving course operator at Barwon Heads airport. Today was going to be the 1st stage of the course where I have to undergo a full day theory program with an orientation to basics of jumping & landing and some ground training.

The day was long and a bit boring with theory but the best part was to come out in every break and see the divers landed in front of you. Just the look of parachutes 4000 feet above my head made me feel super excited. I was feeling like a child after a long long time in my life!

The sessions went on and I learned basics of all main components of any Skydive:

We had a written exam at the end and guess what? It was not just about passing the exam but to know each & every aspect of the program. I corrected my incorrect responses after feedback and I was ready for my first jump tomorrow.

The day had finally arrived and I just could not sleep. The childish Ritvij was almost put to sleep

I reached the diving ground early morning and got myself noted with the Manifest (what they call reception at the diving ground). The ladies at the manifest were responsible for planning loads of the plane. Minimum they needed was 9 jumpers but since it was a Saturday, there was no dearth. I was listed in Load 4. Each load took almost around 40 mins to turn around. The 3 hours of wait seemed long at the outset but the practice touches made the time pass so fast. I had to follow a simple sequence of commands at all the 4 stages of my jump. After exiting the plane, I had to

before I would deploy the parachute at 5500 feet. 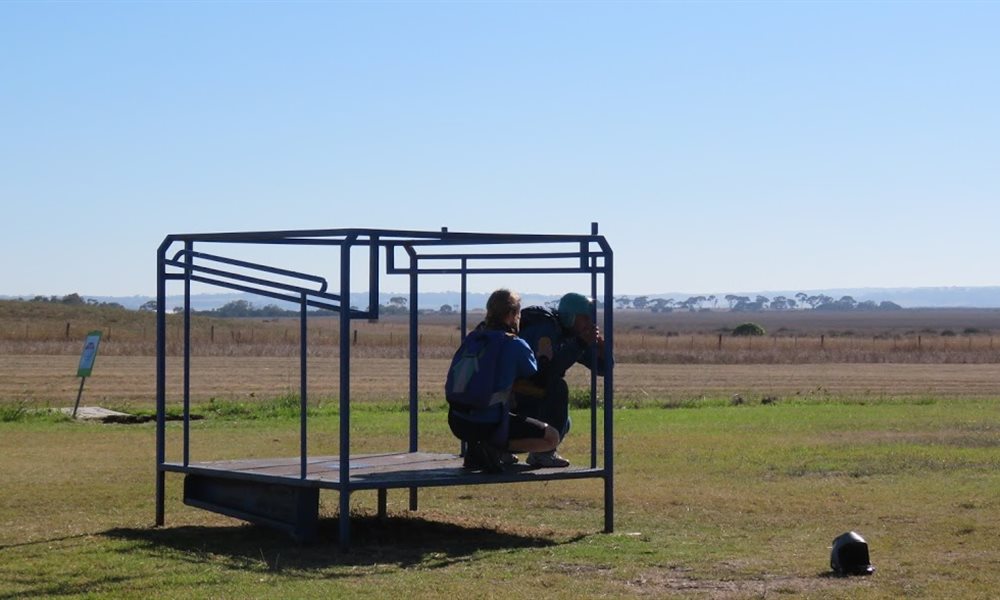 When I boarded the plane, I was feeling strangely comfortable but I started getting my own dose of hormones as we reached 10000 feet and the door of the plane was opened. Within the next 10 mins, I had to jump out of the plane but suddenly I felt I could not breathe. The wind was so strong in to my face! They never tell about such petty issues in the classes. So, I opened my mouth and just tried to forget about breathing. Thank god it happens automatically

The first feeling that I can remember now (after I jumped out of the plain) was a need to look at the altimeter on my wrist. Once I saw the pin sliding from 13000 ft, I knew I am fine. I did my routine checks and everything all fine but the 70 seconds I spent during the free fall, waiting to deploy, were the longest 70 seconds of my life. I had never felt quite like it in the past and cannot really see myself feeling similarly again. I could see my instructors falling next to me and I knew I am all alone in this big sky, following the rules of Gravity and not doing anything else.

Looking at the horizon and getting amused.

Looking at the horizon and getting a bit anxious (deployment coming soon).

No horizon. Just my meter.

2 Waves to let my instructors know that I am deploying.

Left Hand above my head, Right hand on the Pilot shoot lever and PULLED it.

Now the command was to count for 5 seconds after pulling and wait for the parachute to open but within a couple of seconds, I felt a huge shock on my back. Before I could realize anything else, my parachute was open. I looked at it and it was huge! Student canopies are larger than the normal ones but still, I was opening one for the first time, so I guess it looked larger to me.

And started looking for my landing area.

But did I tell you that my time had stopped? After the free fall, the stability of parachute felt so different. It felt as if I had all the time in the world to plan my landing.

It felt so liberating. I was flying!

I was not really thinking anything till I reached 2000 feet. Just having fun. That's it!

Once I located my landing area and reached 1000 Feet, I was ready to make my right hand pattern. Since the wind was northerly, I had to land facing north in order to reduce my landing speed.

Shit! I can't see altitude in the meter anymore.

I landed all smooth but my parachute would just refuse to die down. Looks like she did not have enough! I finally recalled that pulling only one of the toggles can deflate her fast.

Collected my parachute on my back and the walk back to manifest was one with a rising smile!

Shayoni waved at me and I just smiled back.

Simply speaking, I was happy!

Kill me if you do not like the vocab but such was the feeling. Simple & beautiful. 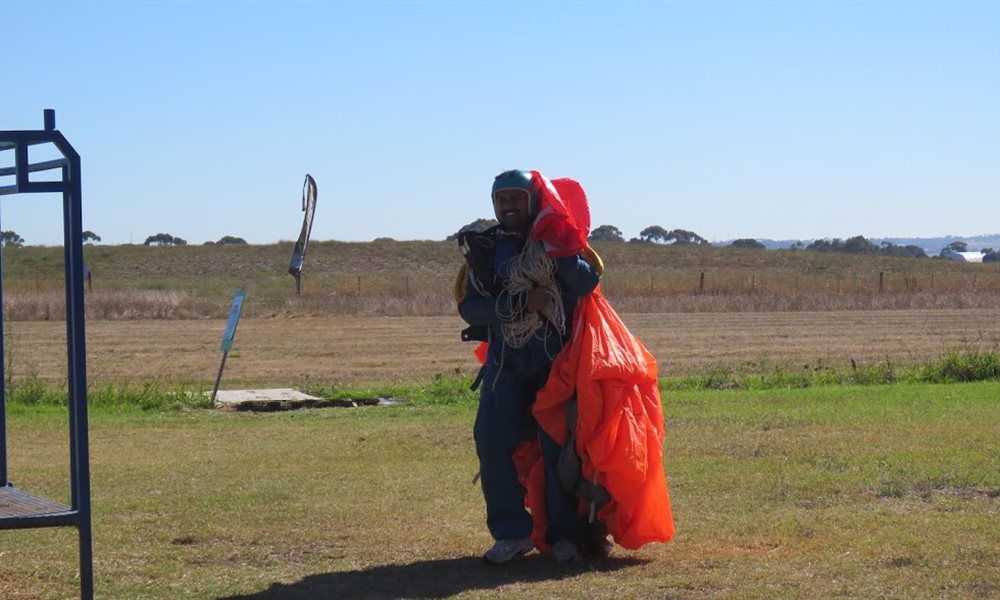 So much more to learn ahead in this sport but first one was special and it will always remain to be!