These 4 Campsites of Miyar Valley will Leave you Speechless

Himachal Pradesh is infamous for its trails, and why wouldn’t it be? Rupin Pass, Patalsu Peak, Hampta Pass - the list of legendary treks goes on and on, but there’s one thing they’ve all got in common. They all center around one specific day.

Think about it, Rupin Pass itself is the goal, Patalsu Peak is the clear apex of the journey and Chandrataal is what everyone ventures to Hampta Pass to see. Miyar Valley (the abbreviated version of Kang La) is different. It breaks this pattern of “grand finale” treks. How does it do that, you ask?

Simple. Every day is a grand finale.

Even better? You get to camp there. To trek Miyar Valley means to see Himachal Pradesh at its finest, with each day ending at a truly remarkable campsite. Take a virtual peak at the truly remarkable places you get to rest your head each night on this trail- but of course, nothing compares to the real thing. 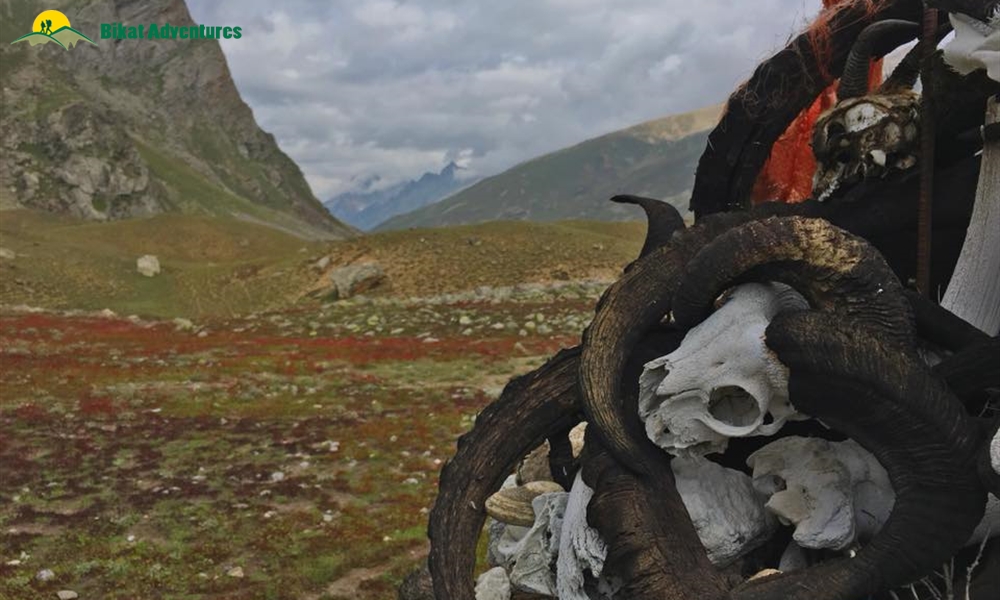 This is your first stop on the Miyar adventure, and starts the trek off strong right from the beginning. Nestled into a thriving meadow on the valley floor that you will become accustomed to throughout the trek, the view of towering peaks on either side frame a brilliantly starry sky at night. The Miyar river itself can be heard gushing down from its glacial origin higher up the valley.

What may be most intriguing about this site, however, are the stories that come with it. Not far from your tent lies a steep lookout with a chorten on top. It’s adorned with ibex horns and remnants of past travelers’ pujas.

More mysterious is the subtle remains of a village, once rumored to have thrived in this valley, but driven away by a drought long ago. Locals claim that there are ghosts walking among what’s left. 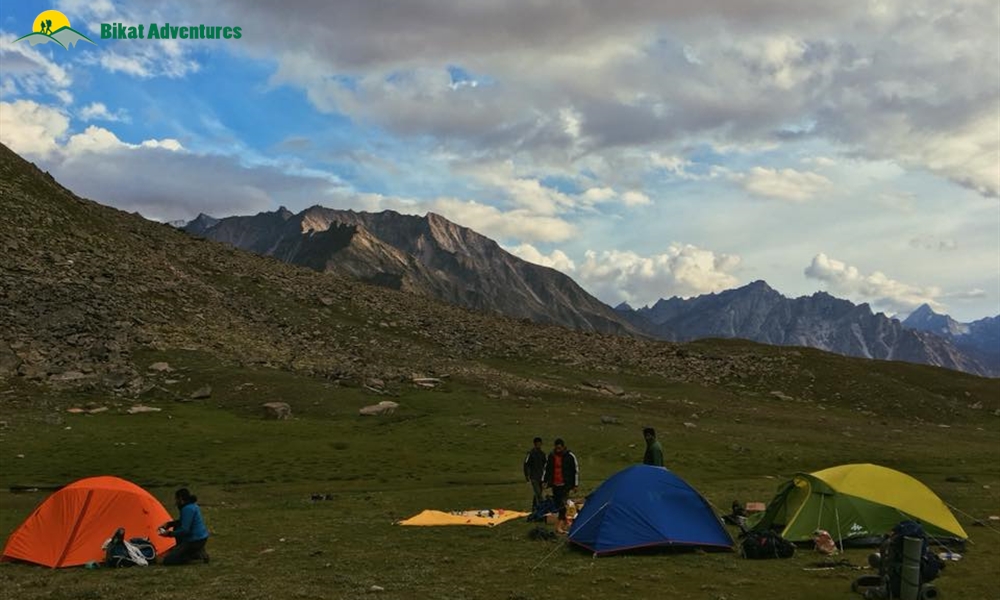 Simple, but perfect is how Yolithang can be described. The campsite rests in an even wider section of the valley, with a snowcapped peak rising above carpets of pink fleece. After a day of taste-testing the local crops and herbs that grow in abundance here, and crossing the rushing Miyar on makeshift bridges, this serene meadow is a welcome rest.

Shepherds also frequent this pasture, and oftentimes stop to share a chai and a story on their way. And the stars at night? There’s nothing like it. 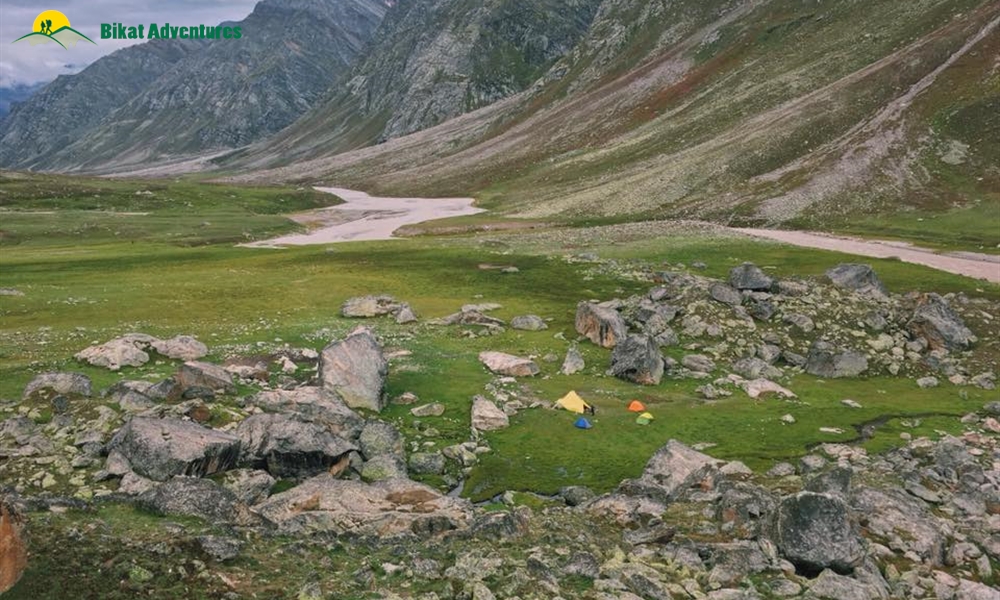 Even by our standards, this is one of the coolest campsites we’ve ever seen- and we’ve camped a lot of places.

Zardung looks as if a king built his castle out of massive boulders into the cliff face of the valley, complete with caves, arches, pillars and a whole host of other striking rock formations. When we arrived there, we were met with a small rain shower and retreated to our tens to wait out the clouds. When the rain stopped, we climbed straight to the top of this “rock castle” and watched the sunset over the Miyar kingdom, with a rainbow literally reflecting on the surface of the river below.

Heading back down from our perch, our guide told us that hidden within the stones are precious stones, worth a fortune if you can ever find them. Temporarily intrigued by the idea of instant riches, we scanned the boulders, until he began to tell us about a troll that apparently used to live there.

“You see this?” he asks, pointing to an outcropping in a nearby cave that looks eerily similar to a face, “This used to be a troll that lived in the rocks. But he was frozen into stone by a force of good.”

Talk about a campfire story. 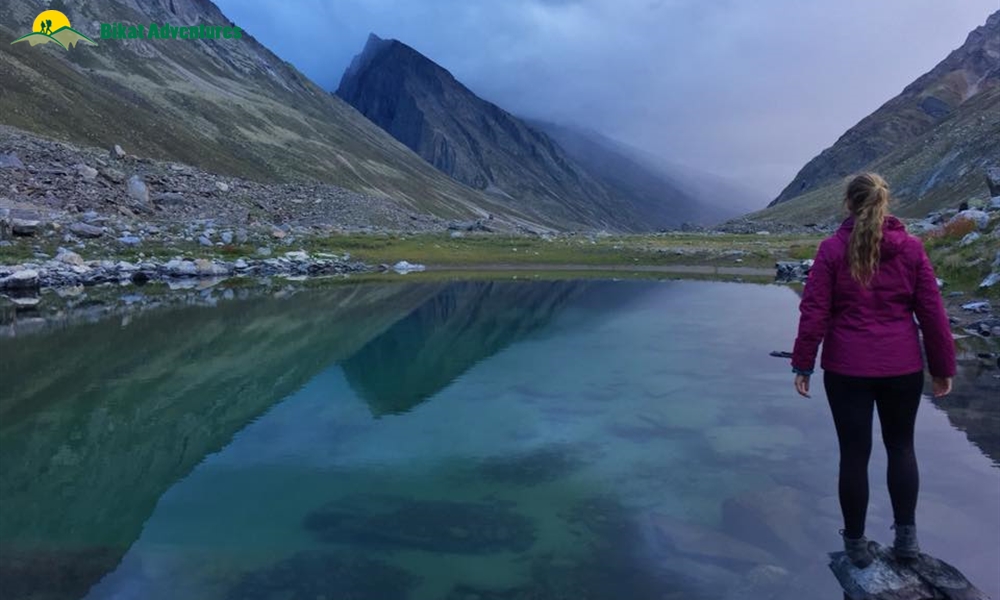 The furthest up the valley on the Miyar trek, and by far my favorite, is Kesar Yon Chhaap. Seriously- what a hidden treasure.

The thing about this place is that, one, it’s the last point of grass on the Miyar Valley before it rises into moraine and glacier, making it feel like you’re truly the last person on Earth, and two, since the moraine begins not long after, mounds of rocks surround your tent in every direction.

Take a post-tent-set-up stroll and see what you find. I promise you, you will not be disappointed. Hidden between those enormous rock piles?

Seven holy lakes, which is fittingly what the name of the campsite translates into, wait for you to find them, for you to photograph them endlessly and for you to fall absolutely head-over-heels in love with them.

Honestly, this whole trek makes you do that, which is a trek well-spent, if you ask me.