Unexpected results occur only when you tread on unexpected roads

"Unexpected results only occur when you tread on unexpected roads"

So my story begins with 3 of us – Anupam(that's me!) , Anshu and Akash (usually referred as "Agni" due to his "Agnihotri​" surname). After a good amount of calculations, meetings and deliberations, we had planned a Delhi-Manali-Agra tour plan after the end of our 4th year exams. This is us on our final day at Howrah station. 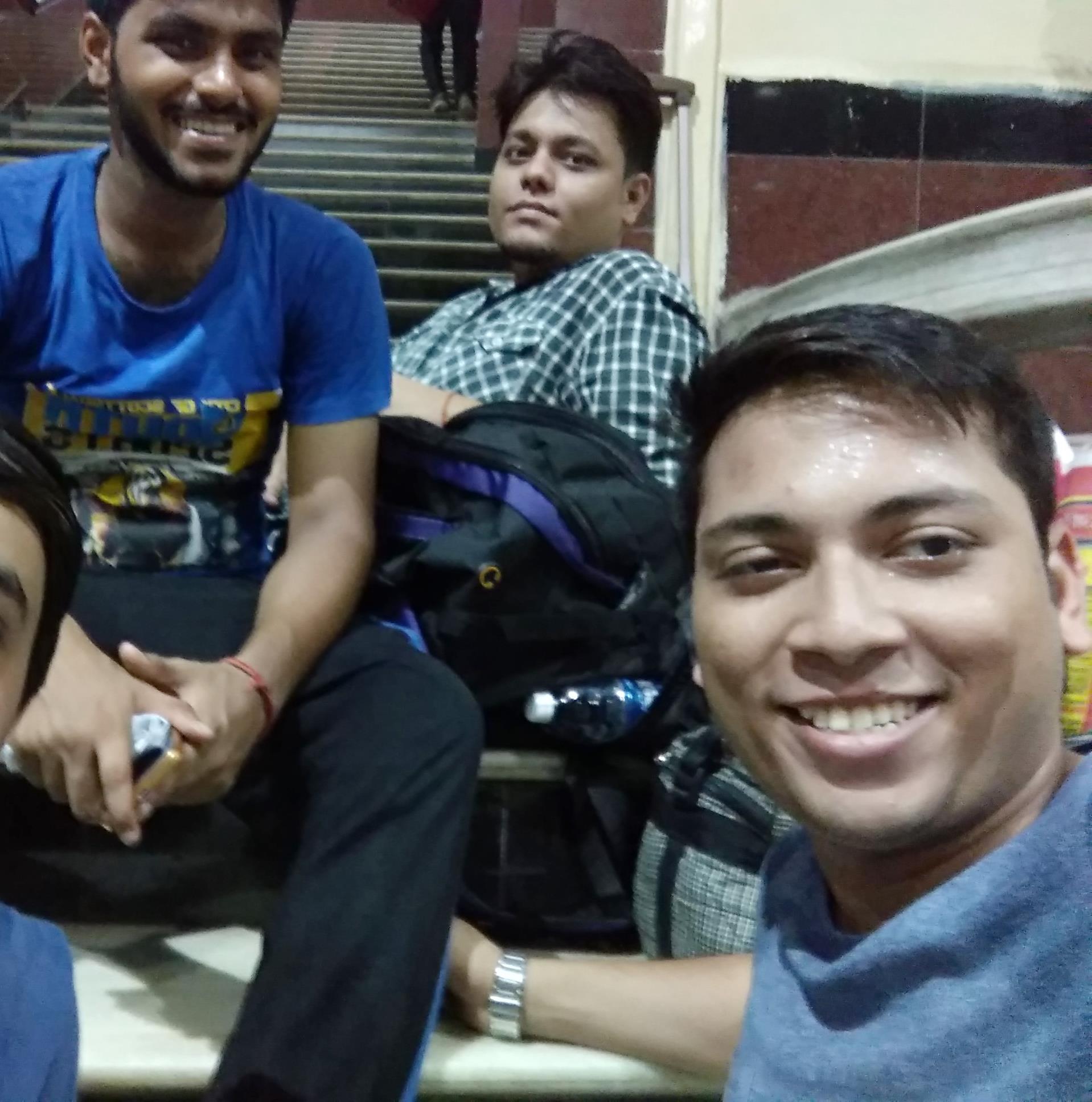 Left to right: Me,Agni and Anshu

On 15 th of June we boarded a train from Kolkata to Delhi. The train journey was a peaceful one with usual conversation and debates that happens amongst a group of boys about girls, drinks and many more. It was our first morning in Delhi and we visited a few heritage places of Delhi. After trying out a few famous snacks in purani Delhi in the evening , we left for ISBT bus stand to catch our bus for Manali scheduled to leave at 6:30 pm. There was this guy Akash (not "Agni"; some Delhite) who sat beside me in the bus. He was a quite frequent trekker indeed and the experiences that he shared on the bus journey was motivating. Even I had thought in my mind to come next time in Manali for a trek. But who knew destiny had its own plan! Nothing quite interesting happened in the night except for a few catfights (:P !) that occurred amongst the  fellow passengers.  But the view I witnessed in the morning was mesmerizing to the eyes and soul.
Here are a few that we saw on the way. 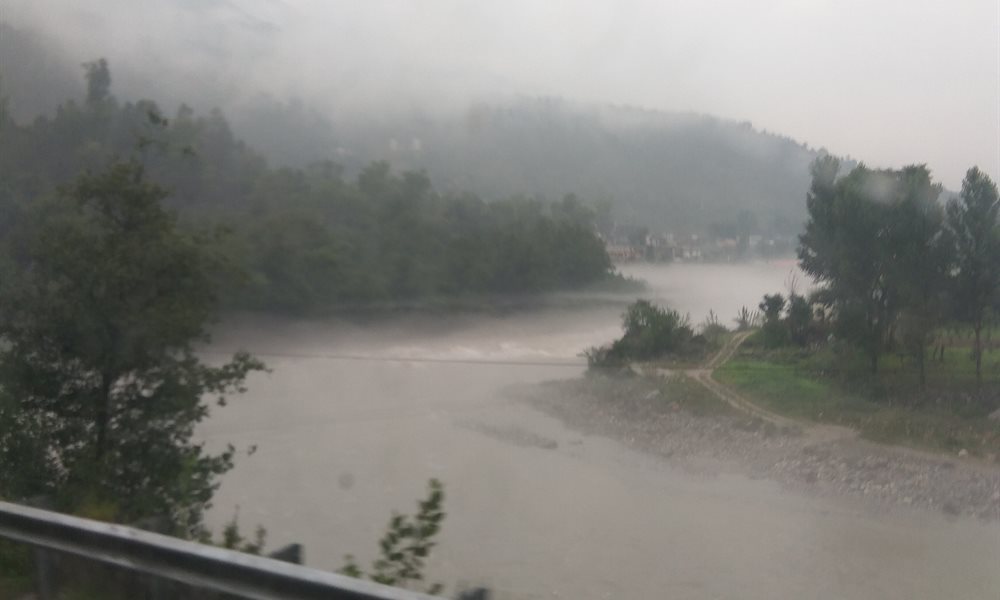 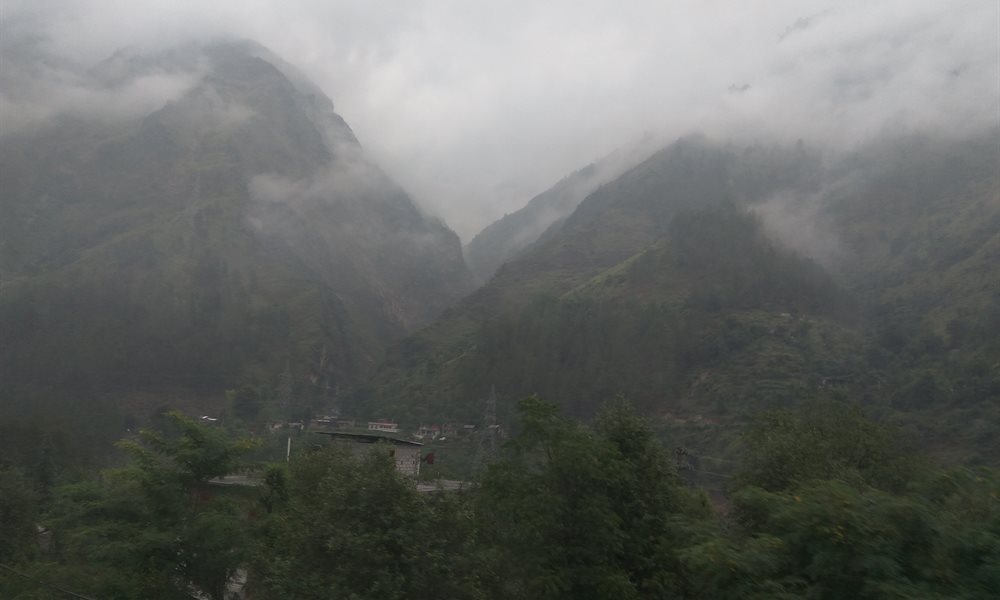 Especially for someone like me who had seen hill station for the first time, my excitement level were altogether at new heights. With the lush green mountains, the mysterious fog, the draining sound of white water of Beas river, old and young beautiful ladies clad in pretty hilly dresses, passing by; we were assured​ that we would be reaching Manali in no time. By 11:00 am in the morning, we were standing at Mall road in Manali.

We decided to take rooms in Old Manali as Mall road seemed more like a of a place suited to couples and families. Old Manali was located 1.5-2 km uphill from  Manali and every day we had to climb to reach our guesthouse. I and Anshu were okay with it, although Agni being fat amongst the three, displayed a good spirit inspite of facing some minor pain in legs.

On reaching Old Manali , our expression was like ," BC, yeh toh hill stations ka Goa hai". Indians were outnumbered by the amount of foreign tourists especially Israelis visiting here. And it is always a visual treat to be surrounded by so many pretty white faces

.  Even the hotels we stayed at, had many Israeli travelers lodged there and my god , the view from the hotel was worth that arduous 1.5-2 km daily climb. 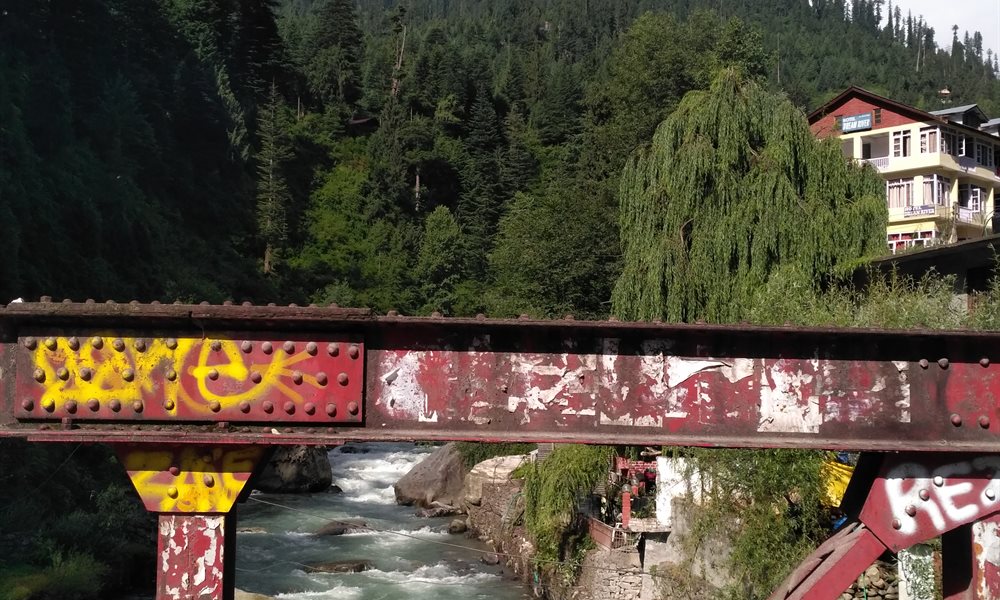 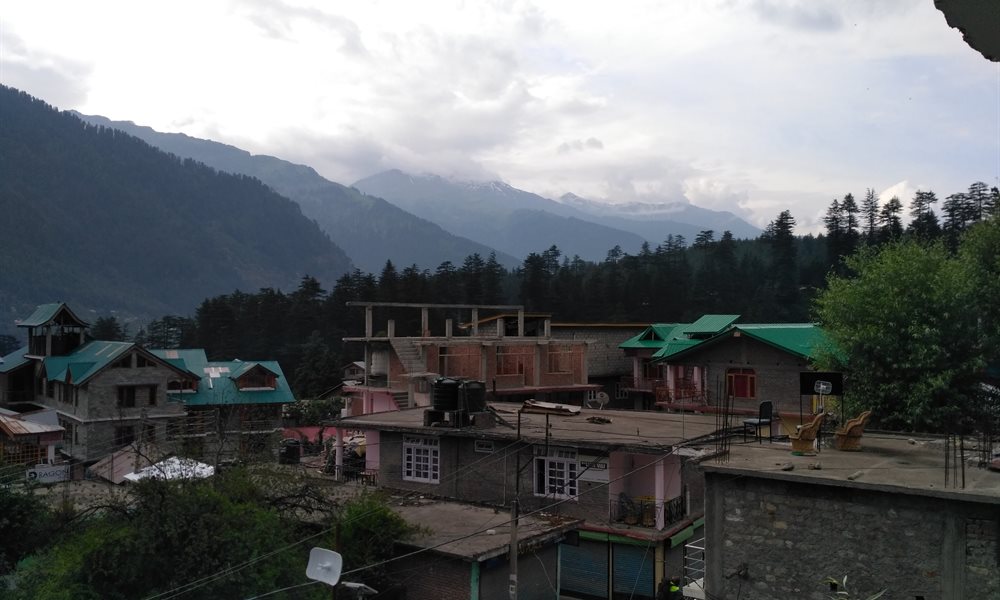 View from our hotel! 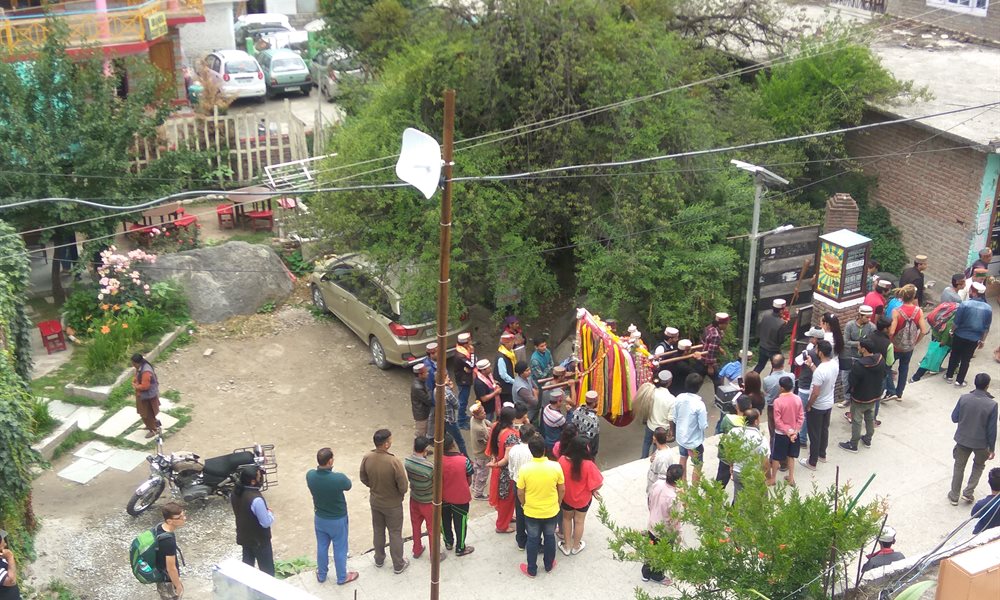 Old Manali-People and some Ceremony

In our next 2 days stay at Manali, we had done local sightseeing, tried out the different adventure activities, the Solang Valley and everything else. 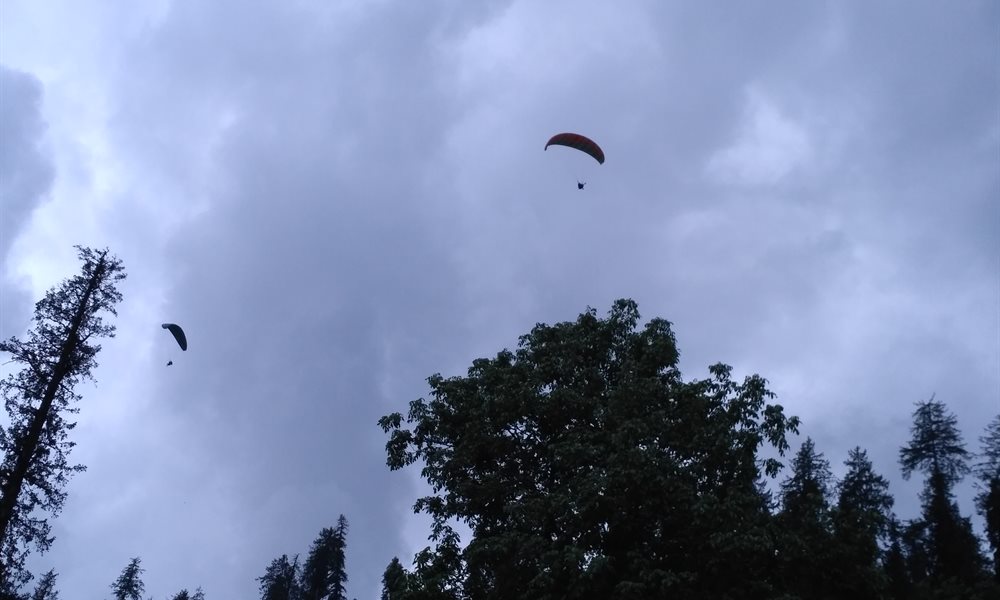 All that was left was the Vashisht Baths and the Jogini Falls. On the 2nd night, we had seriously walked a lot(min. 9km), since we missed the last bus from Solang Valley in return and all due to my lack of patience to wait for the bus at the bus stop to be arriving in an hour.
In the night, we bought a bottle of Rum, Everything started
with a fun and frolic note, but later the conversation turned serious. After a really
long time,we had such intense conversation. The cool air, peace and a sense of
solitude might have been somewhat magical and hence, surprisingly very
unexpected secrets, confessions and dark fantasies came out. About 5 in the morning we slept with the bro-code that "Whatever heard in Manali would stay in Manali forever". The next morning everyone felt a quite lighter but the heavy downpour from morning to evening made us to confine ourselves within our rooms and nothing quite interesting happened on that day.
Now the main story starts. It was our 4th day and we had to anyhow leave for Delhi as budget didn't allow us for one stay. In the morning we left for Vashisht bath. It also had a hot spring which was although smelly and warm too .... But once you get in , it starts becoming relaxing. After the nauseating yet refreshing, we moved towards the Jogini Falls. It was 11:00 am when we left Vashisht and we had to reach Manali by 3:00 pm as we had a bus to catch. So ,in short we were running a bit short of time too. The ways led us through the thin and wide streets of Manali and finally led to a series of steps that would advance finally to Jogini Falls. After climbing a few steps, I saw a path on the side of the road with which we could climb on the jungle above. We thought that the other side of the jungle would definitely lead to the Falls and by this way we could save some time. This was the start of our trek. But before starting, let me tell you that  Agni had the best pair of shoes from Woodland which were almost new ; then was me who was wearing kittos which I was wearing for the past 1.5 years. Now you can well understand how weary would it be. Then again there was Anshu, whose shoes were quite slippery compared to the two of us. Plus there was heavy rain yesterday which would have made the ground quite slippery. Even after knowing all the problems, the 3 idiots decided to take up the risk. After climbing a few foots above the ground, we were into the forest. The forest was a typical one that looked like a movie shooting location. To our utter disappointment, the forest ran almost parallel to the road and we had to climb way high up which even might or might not lead us to the Falls. Or what we could do is to climb down and follow the normal route.  Suddenly , Agni came up with the idea of the trek and to climb high above saying ," Mereko pata hai that I'm the rational guy but pata nhi aaj ek dam upar chadhne ka man kar rha hai. Let's do this guys!" This almost came as a shock to both of us. Because it was always me and Anshu who thought of doing things like this so crazily and Agni was always against treks and it was beyond his rationale to take such pains for just a view. Anshu even joked saying," It was the alcoholic hangover which he wasn't over with yet" but whatever it was we readily agreed to it. 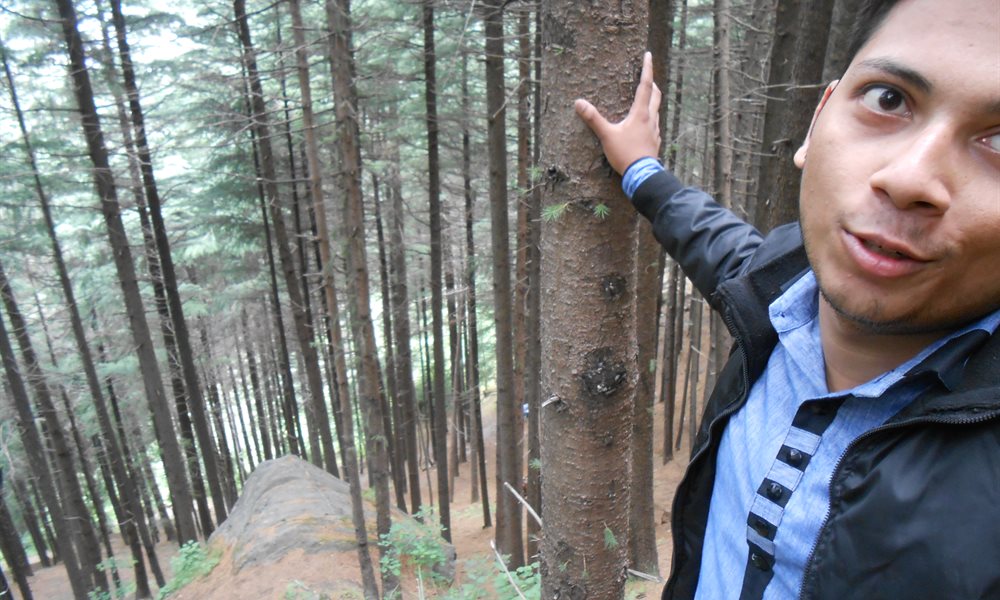 So this was the official kickstart of our  trek. I, being the most crazyhead among the three was leading from the front while Anshu was kept at last for the safest path,all due to his shoes. We kept on moving uphill while Agni kept a track of the directions we headed to ,through Google maps. I always had a list of songs to be played at such a locations and how could I miss doing that. So the music being continuously played, no idea whether we'll reach our destination or not, we kept on moving. The trees were very helpful supports there . Soon we reached a point where Agni sat down due to short of breath. A few minutes late we resumed our journey. After several metres of elevation above the ground , we saw a path through the forest which very clearly signalled that people have been through this area and this might lead us to Jogini Falls. Our hopes finally started taking some shape. With further progress, we became even more assured.
Soon we reached a great a height. The view was no doubt mind blowing but it was breath taking at the same time to look at the great height we've come. Then there was a dangerous curve we had to cross. Through a very small edge, we had to pass through. And thank God ,Anshu was extremely careful in the situation and leaving aside his male ego he asked for help whenever necessary.

The further we progressed, the thinner
the edge would become. But thanks to the proper communication and concern for
each other, all of us safely passed through the obstacle. Just after this, we had to
pass through a rocky terrain which ,inspite of being at a greater height , was safer
to pass through. After a few more metres ahead of that rocky terrain, we could
hear a draining sound. We started walking even more fastly and a few more
minutes , our hearts felt a burst of happiness.

Not only that it could be easily seen that we had the pleasure of seeing the waterfall through such closeness whereas the staircase road was several metres down. Indeed this a**hole's (Agni) decision was once in a lifetime right.
For a long time I had wished to dance behind the waterfall like Mandakini did in the movie "Ram Teri Ganga Maili " (jokingly, of course!). Although I didn't dance but I did climb behind the waterfall inspite of Agni and Anshu's repeated warnings due to muddy and slippery rocks and water falling with such enormous force. It was yet another wholesome experience beyond the scope of any dictionary to provide it a correct definition. Yes, the dart which we threw in the dark finally hit the correct spot.
On our return, out of nowhere ,we had the company of 2 wild dogs and we reached back safe and sound without any wound 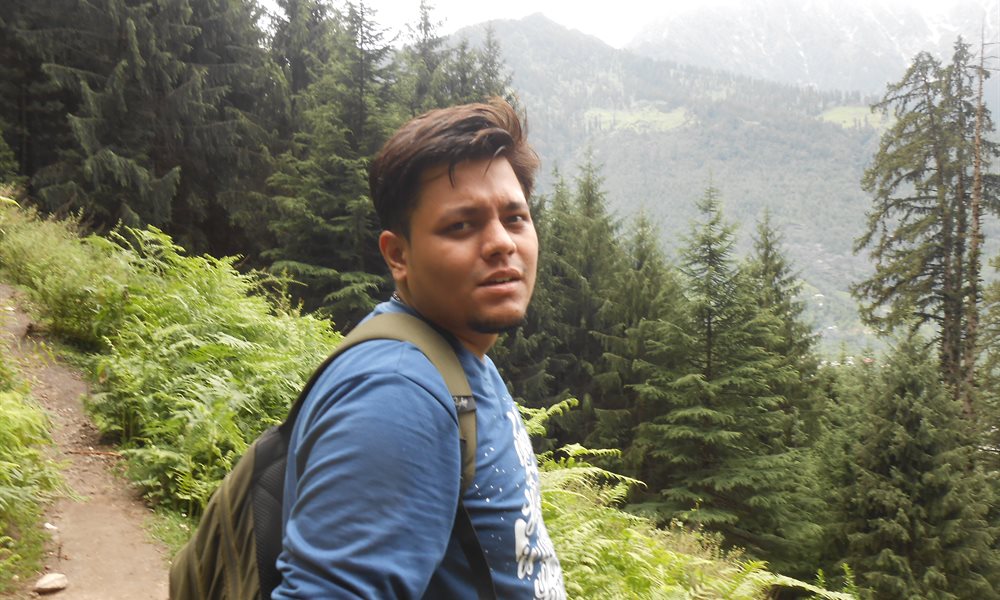 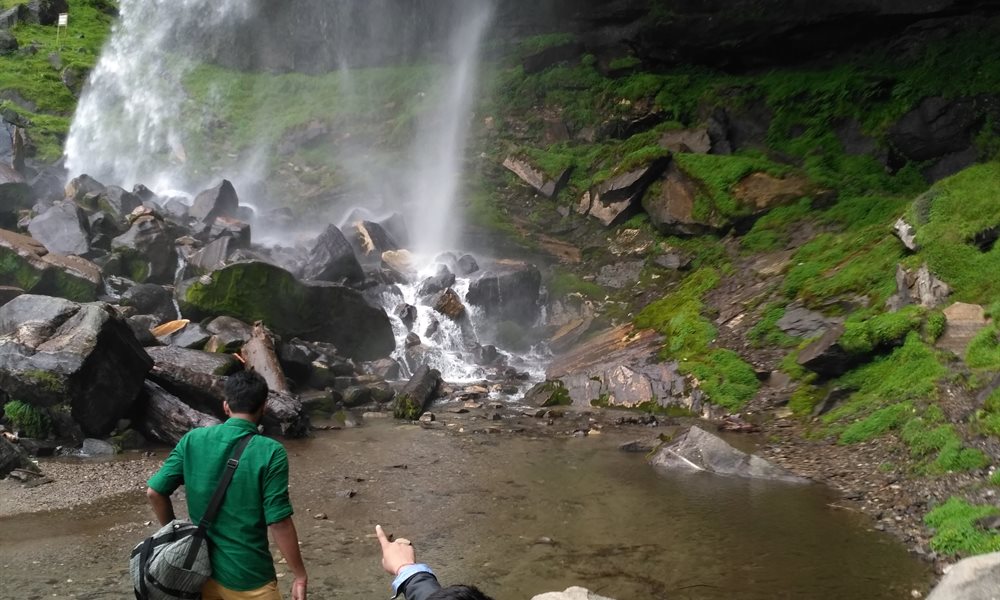 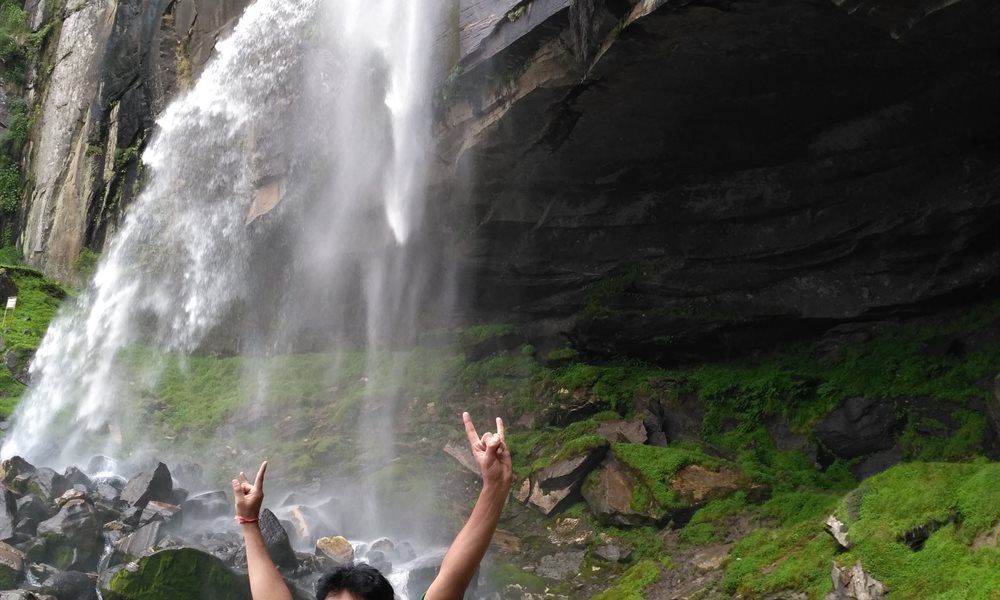 Hi Guys! My name is Anupam Chaubey. I am 22 years old and have recently graduated from my engineerin Read more