Top 5 Challenging Himalayan Crossover Treks To Do In 2019

In the awe-inspiring world of trekking, treks which takes you from one state to the other are some of the best adventure experiences one can ever have. The gift of such crossover treks is that you get to enjoy not only a significant difference in landscapes but also in cultures and rituals. The crossing over of state lines presents you with a best of both worlds type of adventure taking you from the lush green valleys to the ice cold glaciers to the desolate and dry landscapes. The nature of trekking across state lines is nothing short of breathtaking when confronted with a sudden change in views and sceneries when least expected to leave you utterly gobsmacked.

Some treks take you from Uttarakhand to Himachal Pradesh while others take you from Himachal Pradesh to Ladakh giving you an infinite list of green valleys, waterfalls, meadows, towering peaks, glaciers, mountain passes, dry cold deserts, alien-like landscapes, and desolate trails. Such treks standout as unique, ever-changing, picturesque yet challenging.

Rupin Pass Trek is considered as one of the most beautiful treks in India taking you from the quaint village of Dhaula in Uttarakhand to the beautiful Sangla Valley in Himachal Pradesh. The best aspect of the trek is that every day is packed to the brim with surprises with a changing scenery at every turn. With a maximum altitude of 15129 Ft (4611 M), the Rupin Pass trek is a moderate plus level trek with a three-stage waterfall at an altitude of 3500 M that will leave you awe-struck. 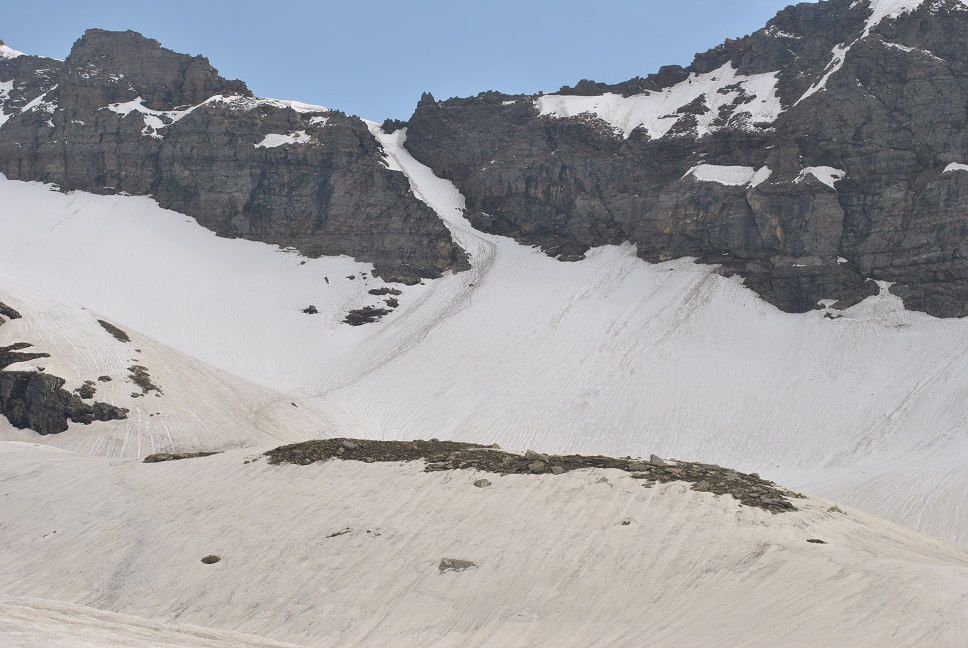 The journey starts from Dehradun to the charming village of Dhaula tucked on a mountain slope overlooking the Rupin river, serving as the base camp of the trek. This trek of 7 days with a total distance of 52 km takes you through some of the prettiest villages, stunning waterfalls, lush green valleys, snow clothed mountain pass with staggering views of mountain ranges. The thrilling climb to the Rupin Pass after trekking across the infamous three-stage waterfall gives you a 360-degree view of multiple mountain ranges and the prominent Kinner Kailash range, finally taking you to the village of Sangla in Himachal Pradesh where the trek ends. 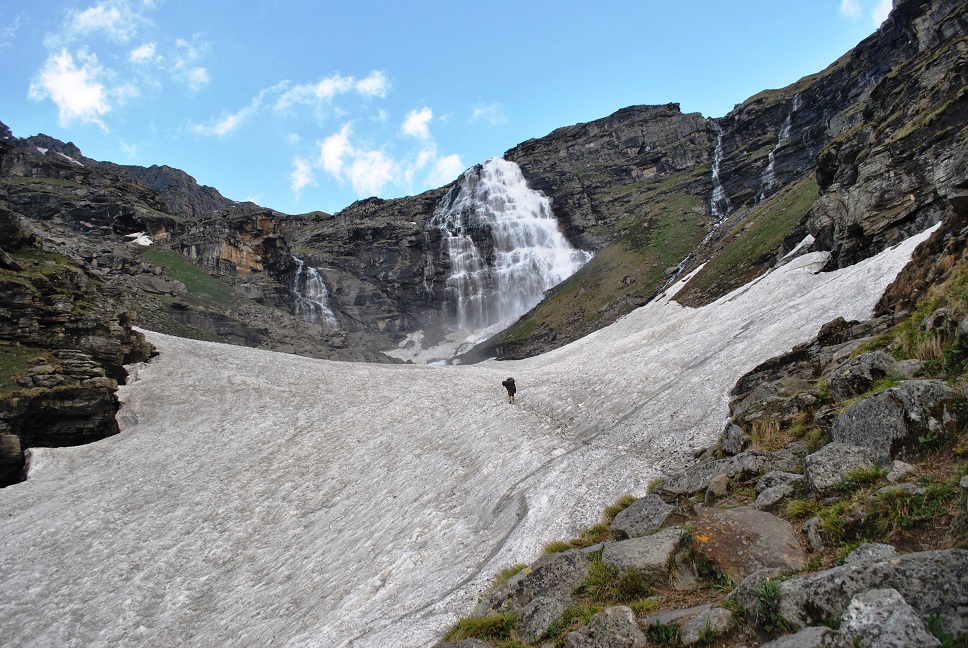 The Prang La is high mountain pass at a staggering altitude of 18373 Ft (5600 M) connecting the Chicham village of Spiti, Himachal Pradesh to the village of Karzok, Ladakh. The Parang La Trek is an ancient trade route between Spiti in Himachal, Tibet and Changthang valley of Ladakh. People from Spiti and Ladakh would traverse along the Parang La valley to meet at the Ladarcha ground to barter their goods. Bustling with history, the Parang La trek is no short of challenging, due to its rapid gain in altitude, remoteness, rough terrain and a long glacier walk. 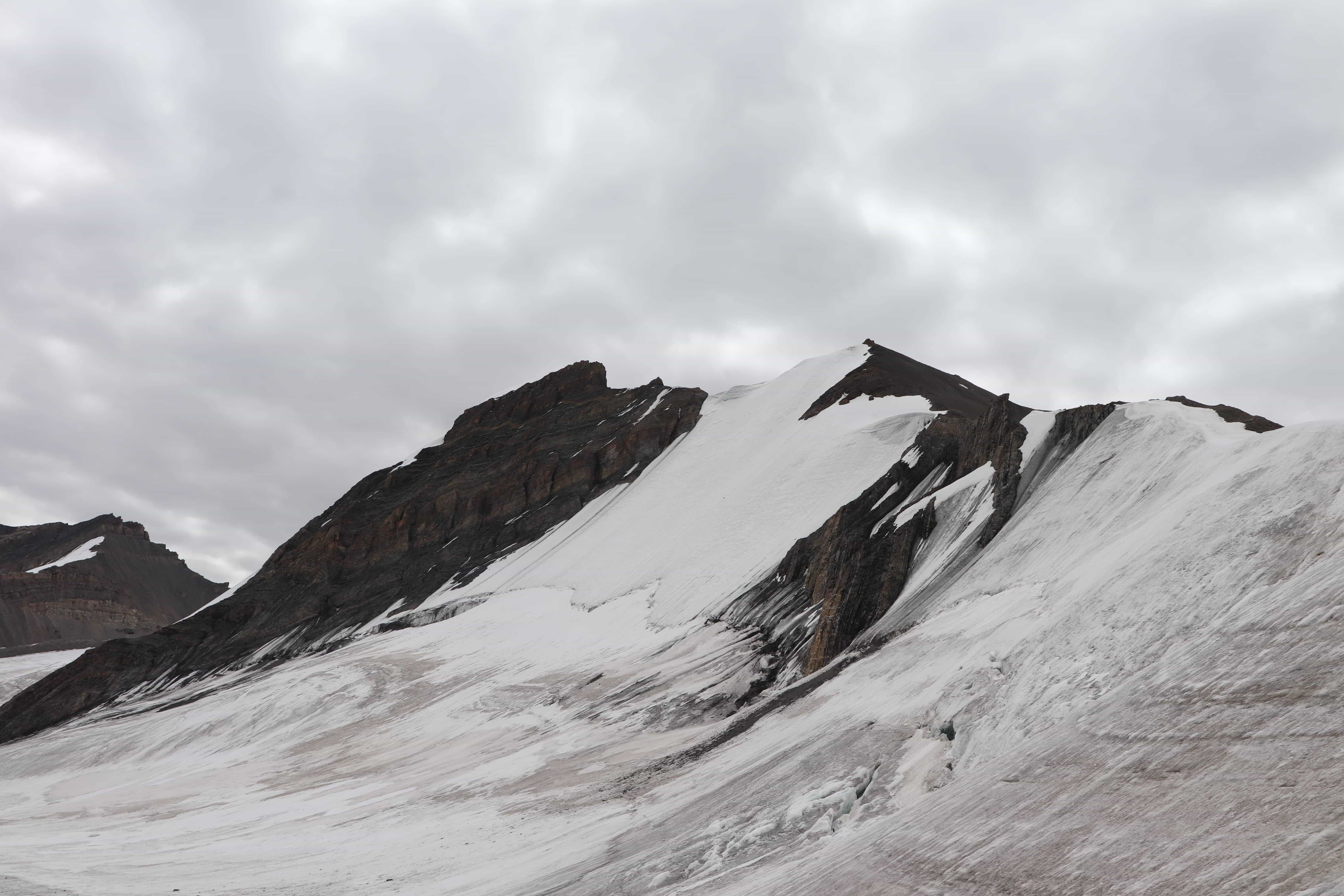 With around 120 km of trekking over a period of 8 days, the Parang La trek is no small feat. A fascinating aspect of this trek is that the mountains and trail get their unique pattern from Spiti being under the sea, millions of years ago and thus houses some unique fossils of marine animals. The trail has vast expanse of meadows, steep ascent, and descent, long deserted walk, and traverse the never-ending glacier of Parang La putting this trek in any avid trekker’s to-do-list. 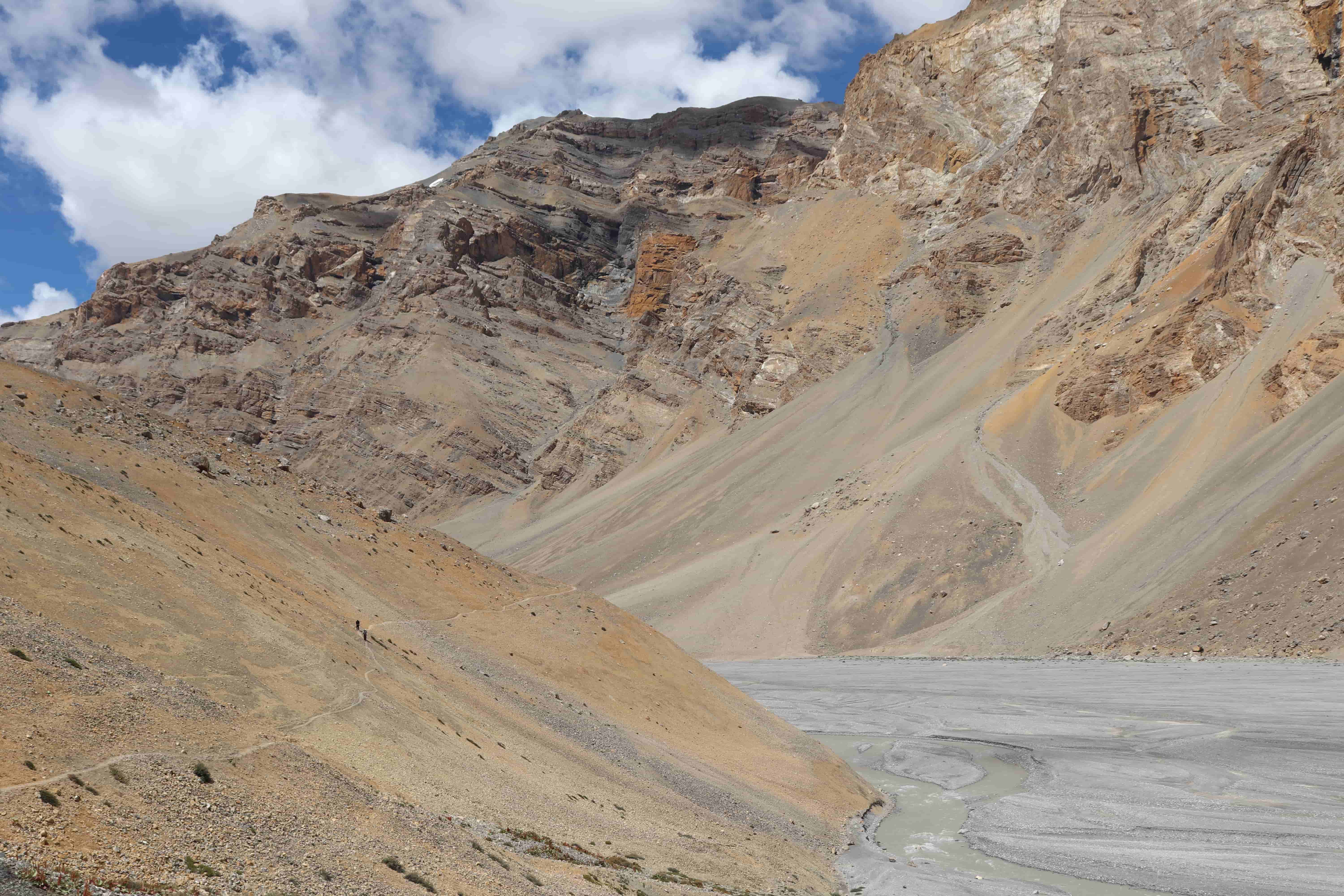 The arid expanse terrain of Spiti and Ladakh

Due to the remoteness of Parang La, there are high chances of encountering wildlife such as wild birds, donkeys, blue sheep, marmots, ibex and snow leopards compared to other Himalayan treks. The most amazing part of the trek is the walk along the Tso Moriri Lake for complete 2 days where the lake offers different shades of blue with many unclimbed peaks in the background. 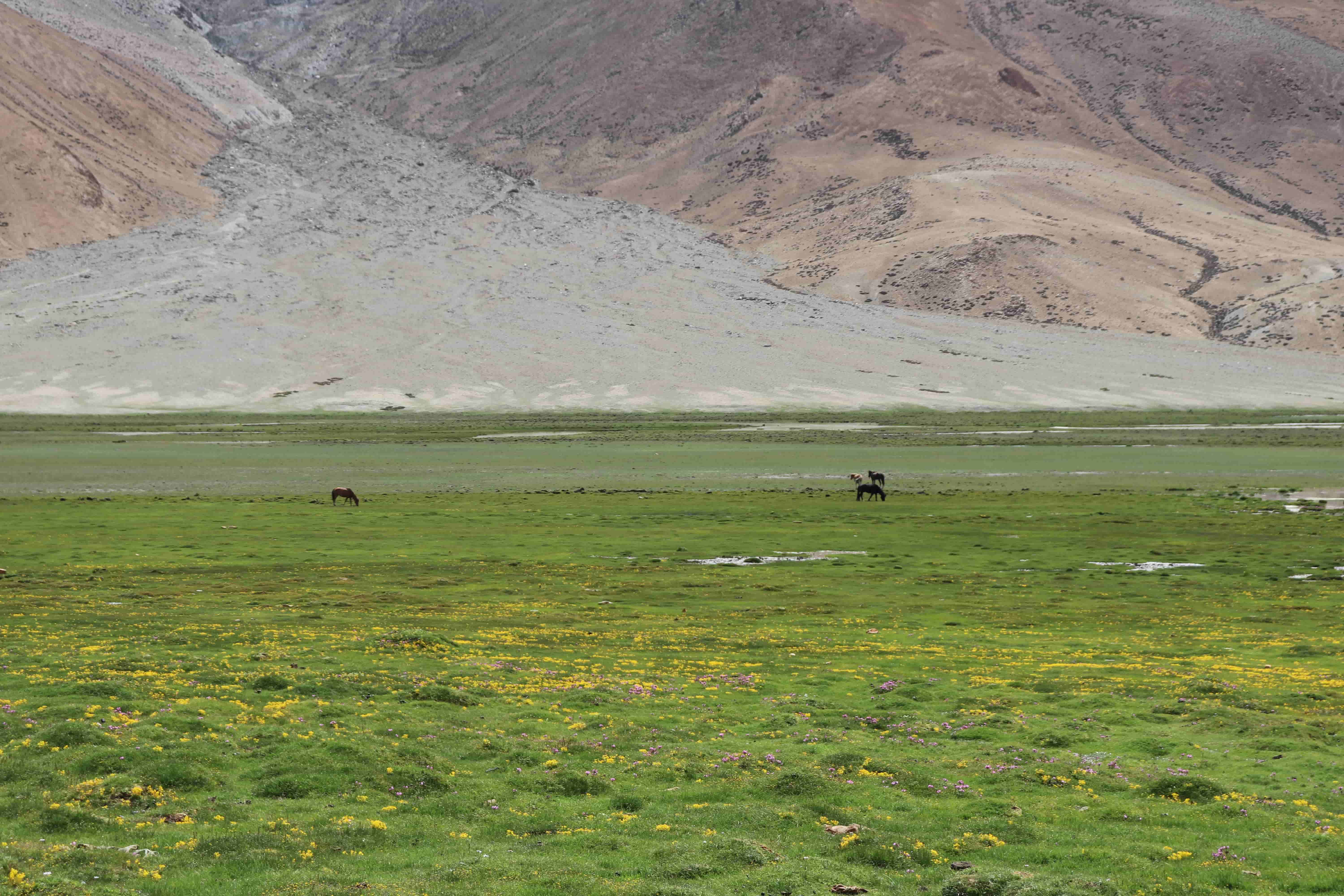 Apart from having a very interesting history, Parang la has loads to offer. You won’t find a single soul out there other than your team and some local shepherds on this trek. Due to the remoteness and tough geographical challenges, only a very few trekking companies operate on this route. But, challenges are what makes Parang La trek interestingly stunning. 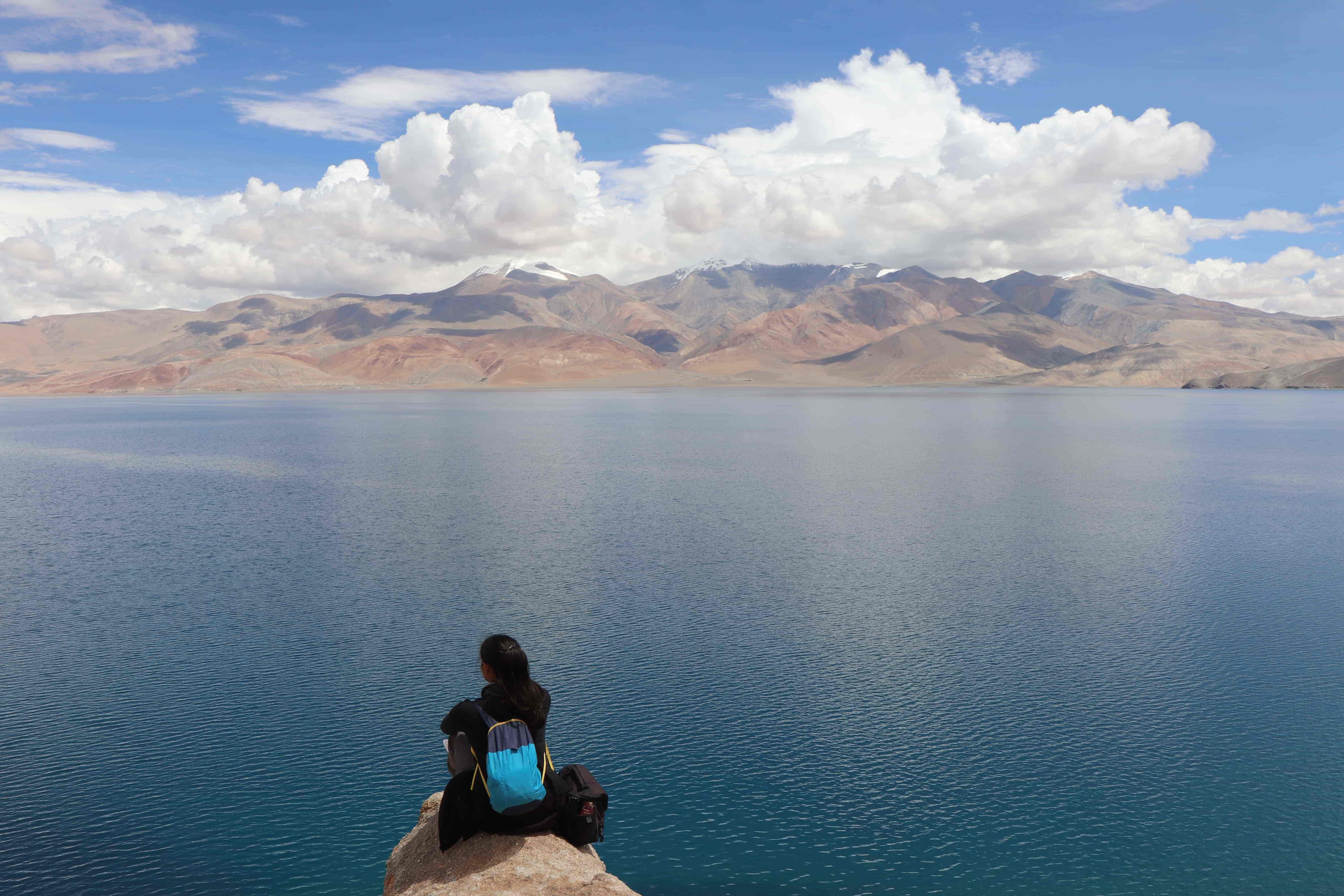 Kang La is a 17929 Ft (5465 M) glaciated pass in the main Central Himalayan range. The Kang La Trek begins in the Miyar Valley in Lahaul, popular for its wildflowers and virgin alpine pastures, and crosses the Kang La pass to the Zanskar valley in Ladakh, a crisp alpine world of rock and ice. Lying directly on the border of Himachal and J&K, Kang La has the third longest glacial approach of any pass of 25km in the Indian Himalayas. The trail passes through one of the longest glaciers in Himachal Pradesh to access the extremely isolated village of Padam in Zanskar, with a total contrast of scenery and culture. 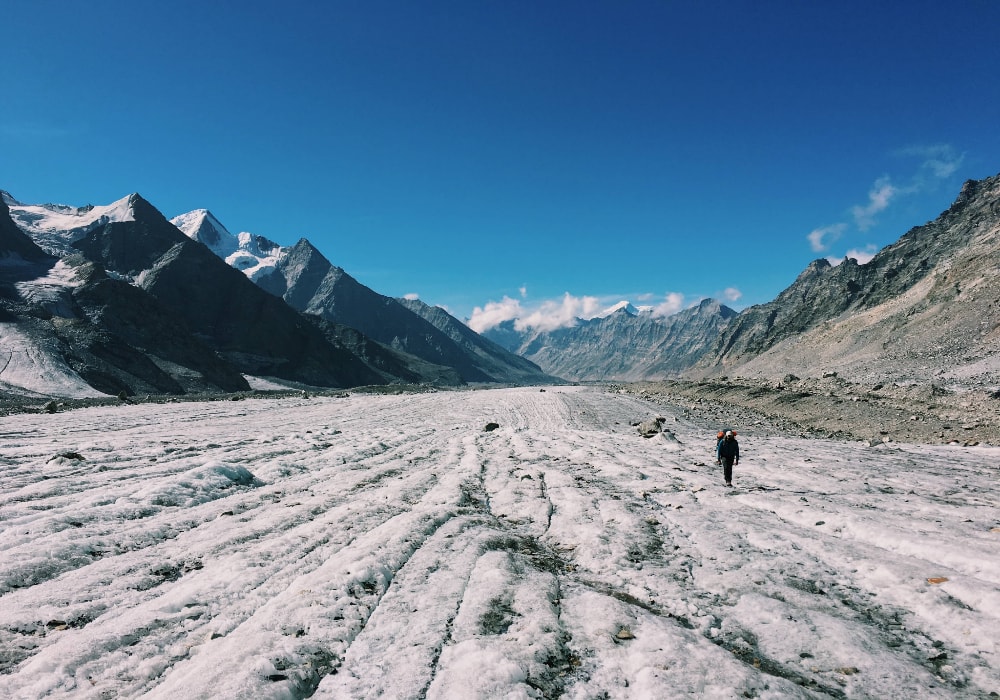 The Kang La Trek is an extremely challenging trek covering a total distance of 95 Kms. This is a grand trek which has everything – countless meadows for three days, sacred emerald green lakes, one full day of difficult moraine, three days on a 25 km behemoth of a glacier descending from Kang La, panoramic views of monstrous peaks of rock and ice, and the trail ends in Padum, Zanskar – one of the most inaccessible regions of Ladakh. 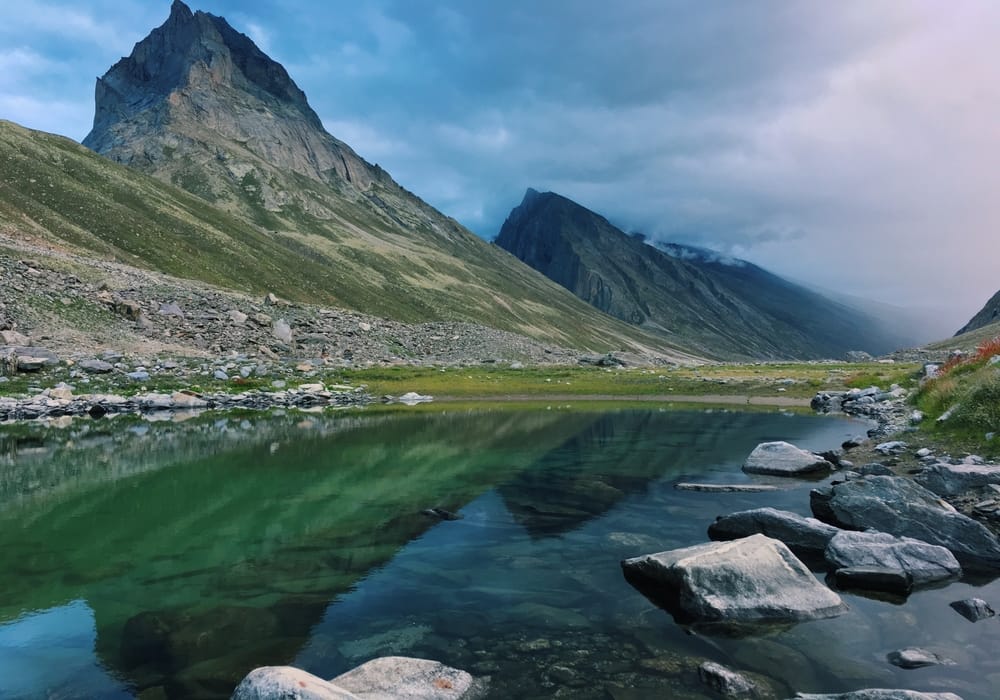 Due to the isolated nature of the trail, the Miyar valley hosts some pristine wilderness and wildflower meadows. One of the best highlights of Kang La trek is as you descend into the Zanskar valley and reach Padum, the largest town of Zanskar, and then drive to Kargil via the Penzi La Pass and witness the majestic Drang Drung glacier surrounded by 6000m peaks. At the pass itself, there are three brilliant blue lakes next to each other. En route to Kargil the twin 7000m peaks of Nun and Kun can be seen towering over the Suru Valley. 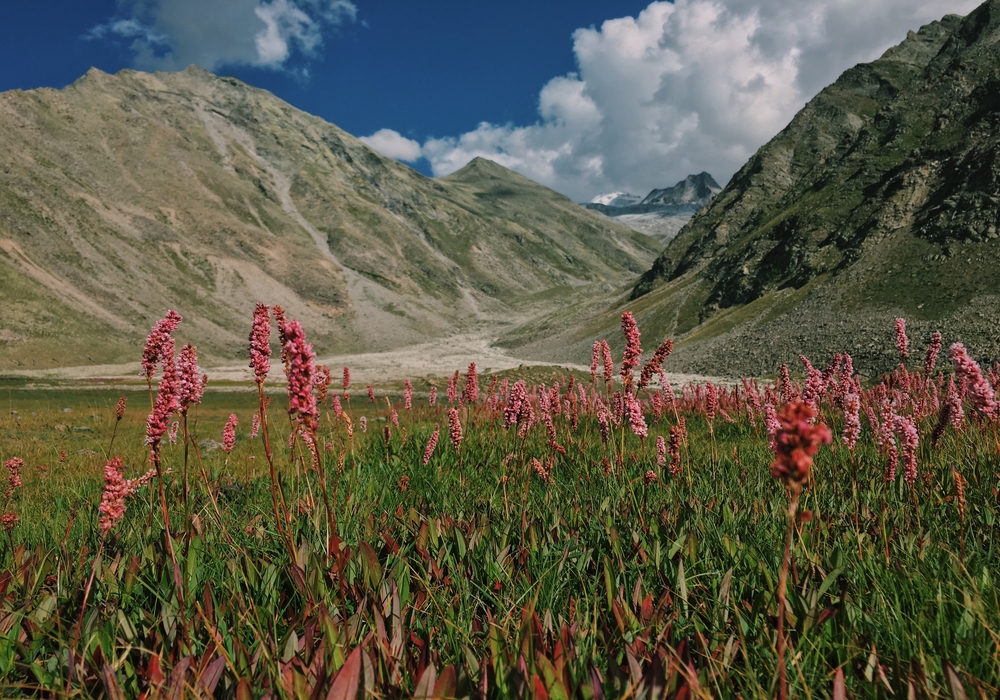 This holy grail of treks, Kang La, will take you through an awe-inspiring collection of meadows, green and blue lakes, several glaciers along with the one you are going to walk on, never-ending views of numerous intimidating peaks, multiple stream crossings, rare wildlife, and the barren landscape of Zanskar, Ladakh. A once in a lifetime trip that starts from Manali in Himachal and ends in Srinagar in J&K, thereby crossing state lines, incomparable landscapes, and cultures. 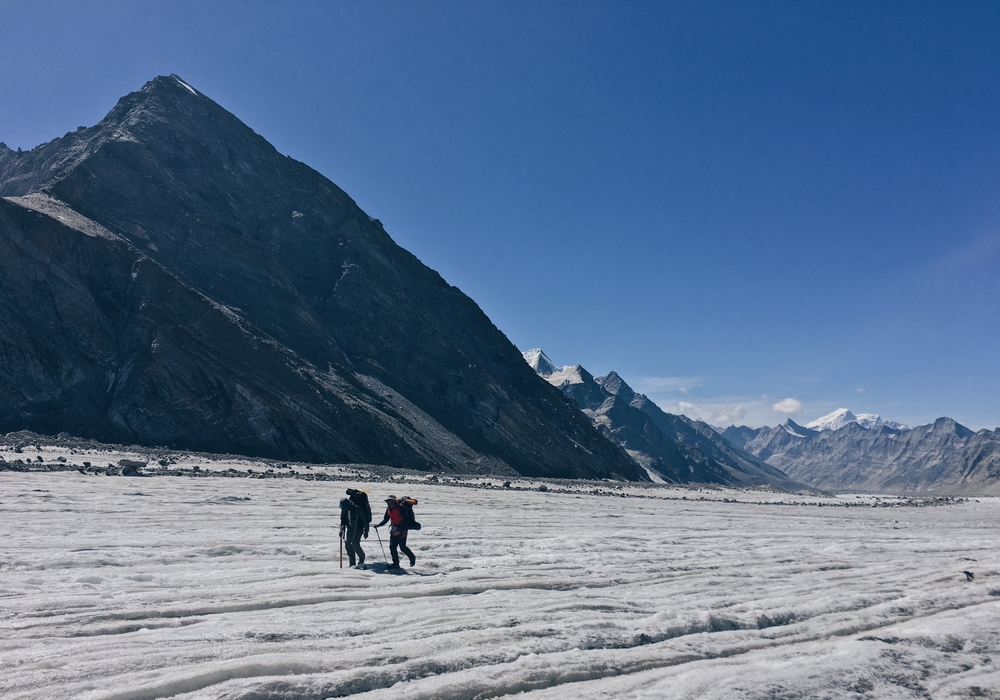 Continuing on the famous Har Ki Dun trail further will take you from Uttarakhand to Himachal by crossing the great Borasu Pass. With a maximum altitude of 5450 M, the Borasu Pass Trek starts from Taluka village in the Tons valley of Uttarakhand and ends at Chitkul in the Baspa valley of Himachal. Considered as an arduous trek, this virgin trail takes you through dense forests consisting of chestnut, walnut, willow and chinar trees, glaciers, moraines, and stunning views of mountains like Bandarponch, Black Peak, and Swargarohini. Located near the border with Tibet, the Borasu Pass was an ancient trade route between the Har ki Dun Valley and the Kinnaur Valley. 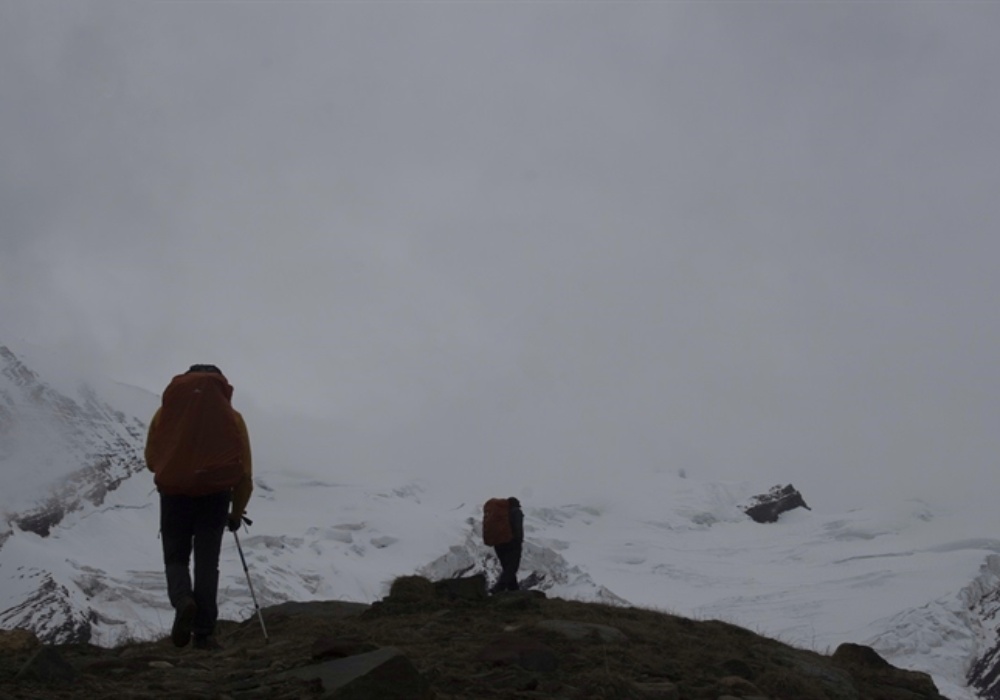 Criss-crossing through colossal valleys, stunning glaciers, moraines, narrow mountain ridges, and a glacier climb with a steep incline of 60 to 70-degree gradient snow hiking with dangerous crevasses, the Borasu Pass trek is exhilarating and ideal for trekkers looking for a challenge.

Lamkhaga Pass at an altitude of 5420 M, is one of the high mountain passes in the Garhwal Himalayas of Uttarakhand. Connecting Harsil in Garhwal and Chitkul in Himachal Pradesh, the Lamkhaga Pass is one of the most untouched and unexplored regions making this trail as pristine as it gets. Being one of the toughest treks in the Indian Himalayas, the Lamkhaga Pass trek is surrounded by 5000M and 6000M peaks most of which are unnamed as this region is not much traversed. This is a classic trail connecting Gangotri to Kinnaur and can be trekked from either side. Taking you through some of the most remote valleys of Uttarakhand such as the Jalandhari Valley, this trail crosses through dense forests of Pine and Deodars, numerous alpine meadows, moraines, several gushing streams, and a very tough glaciated pass crossing. Most of the trail is close to the Indo-Tibetan border, so an Inner Line Permit (ILP) is needed. This trail is blessed with rare wildlife, stunning views of Kinner Kailash and other towering peaks, and the pleasure of visiting Chitkul, the last Indian village before the Indo-Tibet border. The Lamkhaga Pass trek is a daunting trek and any experienced trekker would want to have this trek in their forte. 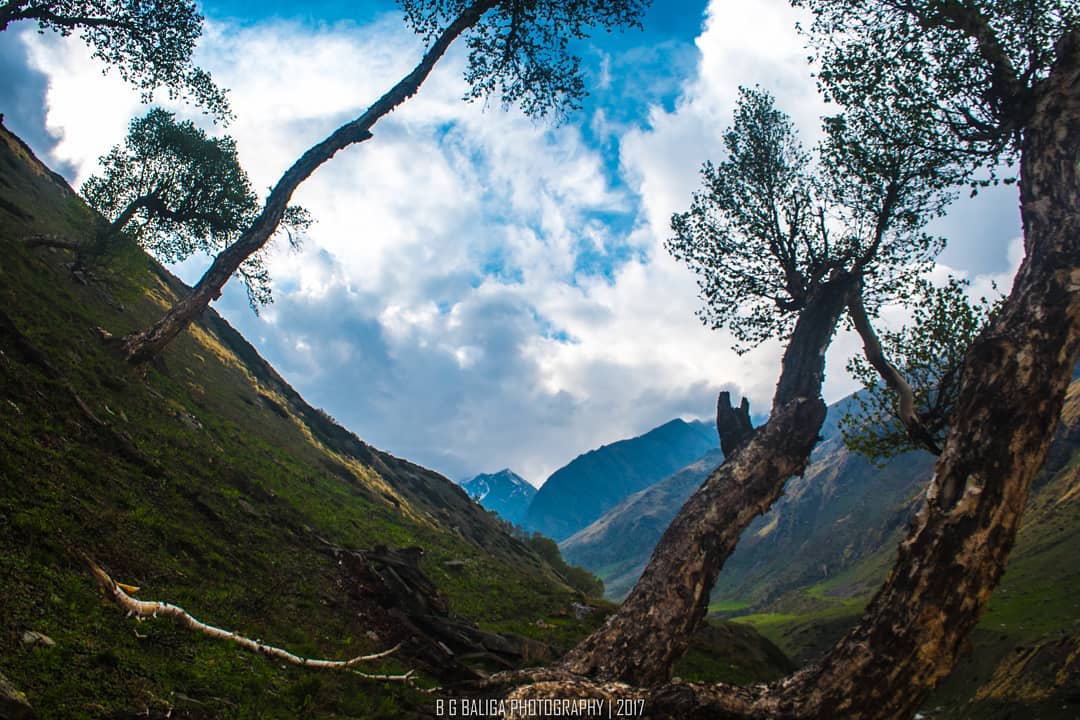 So these were the top five challenging treks in the Himalayas that let you crossover from one state to the other, discovering unique landscapes and cultures. So pack your rucksacks and fasten your trekking shoes to go on an adventure full of the grandest views of the Himalayas for an out of the world experience.

We hope to see you on the trails!