Everything looks like a popular quote once it is kept inside quotes and decorated with the effect of bold and italics.

Absolutely it is not any of the famous quotes you get on the internet. It comes straight from my heart based on the efforts and experience I had.

Let’s go through the experience which let me think of the above sentence.

In my college days, I was a plump, fatty guy who used to be called as Teddy/Panda. But then somehow I decided to loose weight and get slim. In the process of getting slim, I keep on getting involved with things like running and cycling. It was difficult for me to run even a 1km and gradually reached till 10km in 58min 58sec. Cycling was the secondary thing I got involved after running. Cycling 15-20km at stretch was my target initially.

One day in my company, I got a mail which read about Kokan Cycling Expedition -2 days cycling tour – 185 km in Kokan. A glare flashed in my eyes looking at the mail. I thought I want to do this. But few questions keep wandering in my mind like am I fit enough? Do I have enough stamina? The max limit I have ever reached till that day was 60km cycling a day and that too mostly on plain road or max of 10km run. That is all the stamina I had built and this was KOKAN. That means I was going to ride beyond what I have ever done and in the hilly area which was a mammoth task for me. I was too skeptical. The organizers have arranged a practice ride of 30km in some hilly area with ups and downs. I went there and somehow completed that ride and even after that I was skeptical on myself because it was just 30km total and what I was thinking to go for was 185km.

But then I decided that I will do it no matter whatever happens. If nothing than I will get into the backup van but I need to try this. And I finally registered for the event. 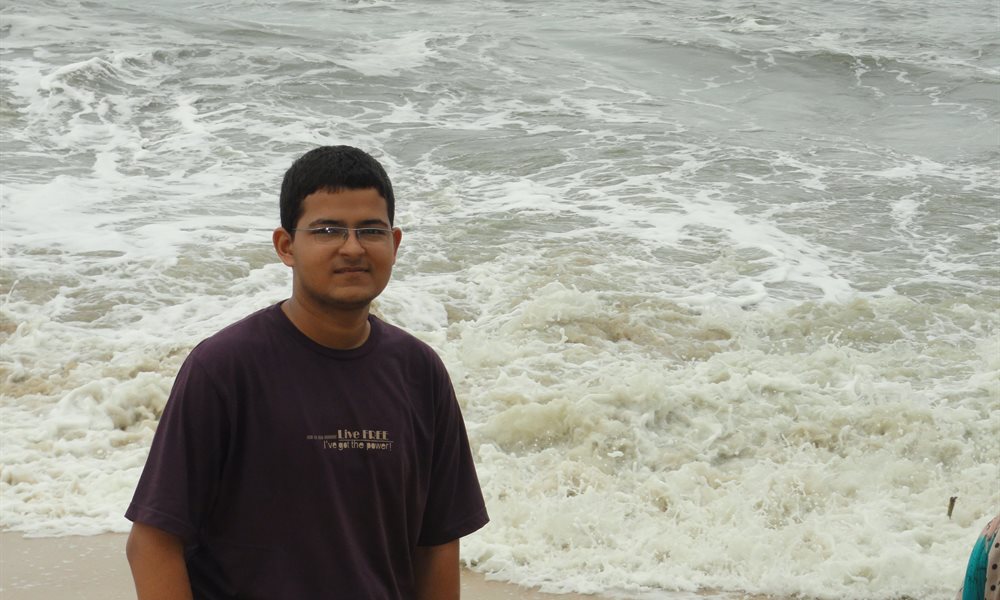 The route and the plan of the ride was:

The D-Day arrived. It was in Dec 2016 and we started early in the morning from our office campus at around 6am. We were group of around 21 people. Few of them were expert cyclist and some were like me as well. It was winter and it was still dark when we started and it feels good to ride early in the morning. We had one van ahead of us and one was coming at the end of our group for backup. Everyone started at their own pace.

Beginning of the trip @6am 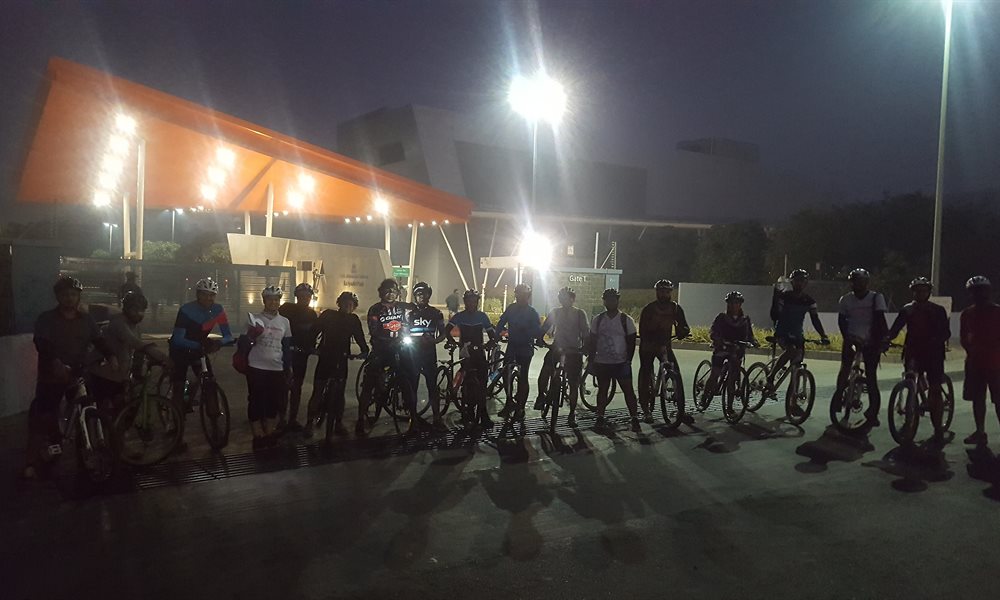 We had our first meeting point at around 50km. By the time we reached our first meeting point, one of the member of the group fell down due to some reason and he was injured. He was not sure how much he was injured but he was having pain in his hand. I haven’t witness him falling down but I reached when he got up and his scratches were being treated with savlon. Seeing him injured, my mind digressed towards various thoughts which were downgrading my motivation and I was deterred and worried that hopefully I complete it. Because it was just the start and I have this full day and next whole day. I kept my mind focused on riding and keep on riding it. The guy who fell down showed so much courage that he kept on riding with the pain further 40-50km.(Then he got into the backup van and later in the end of the day it was realized that there was dislocation of bone in his hand).His courage motivated me to move forward. We passed through the various ghats, ups and downs.

First meeting point at around 50km 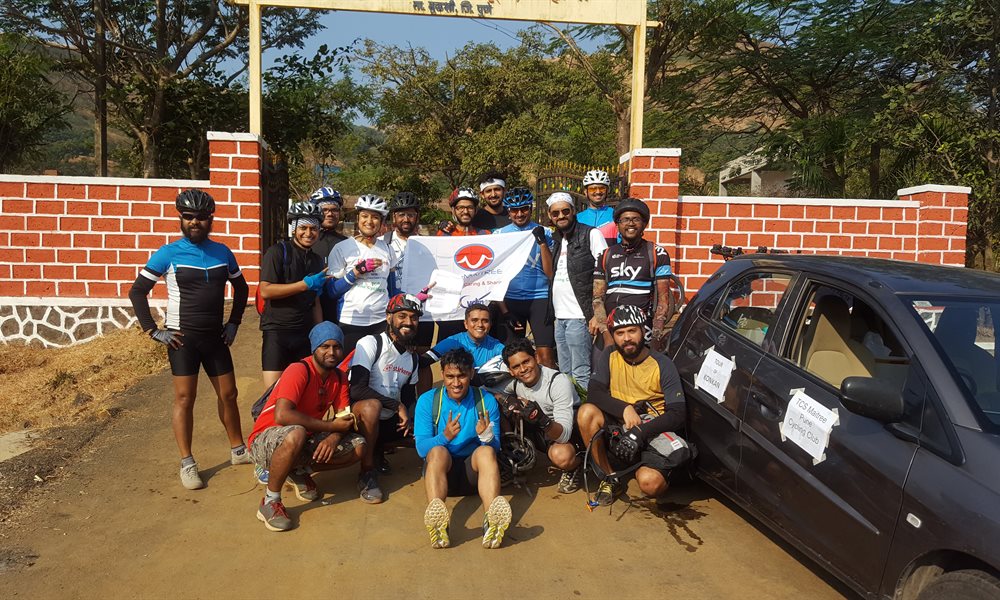 After many ups, there was a stretch of around 7km decline. At that time I realized that declines are much more dangerous than that of ascend. That was very dangerous when you have to keep control of your cycle speed. It reaches till 40kmph but at that speed when you have to apply break, cycle can topple and flip. So that was very dangerous. But we crossed that part where our legs were relaxed but hands were at work with proper braking to keep the cycle in pace.

Moving further and further, we completed 100kms near some village. The organizers were so smart that they haven’t told what’s coming ahead. We completed 100kms and that was a hell lot of confidence for us and the organizers who knew the path ahead didn’t break our confidence. We moved further ahead after gathering together at 100km. After 10-15km, it was afternoon somewhere near around 1pm and again the climb started. After 110km, under the bright sun and heat steep climbs started again and that was the really tiring. The organizers keep on saying that it is just a little stretch and we continued. That were ghat turns, we didn’t know how the road ahead was. After every turn, we expected the road to be straight. But our strength was being tested and again steep climb. It continued for some 2-3km stretch and I thought that it’s time to get into the backup van as it was scorching heat and I was getting exhausted. But I didn’t give up. I crossed those climbs somehow.. by cycling.. by walking.. but didn’t take the backup van. There after confidence was at peak.

Rejuvinating ourselves with bananas and water from the leading car on the tiring ascend. I am the one in orange t-shirt eating something from the car :P 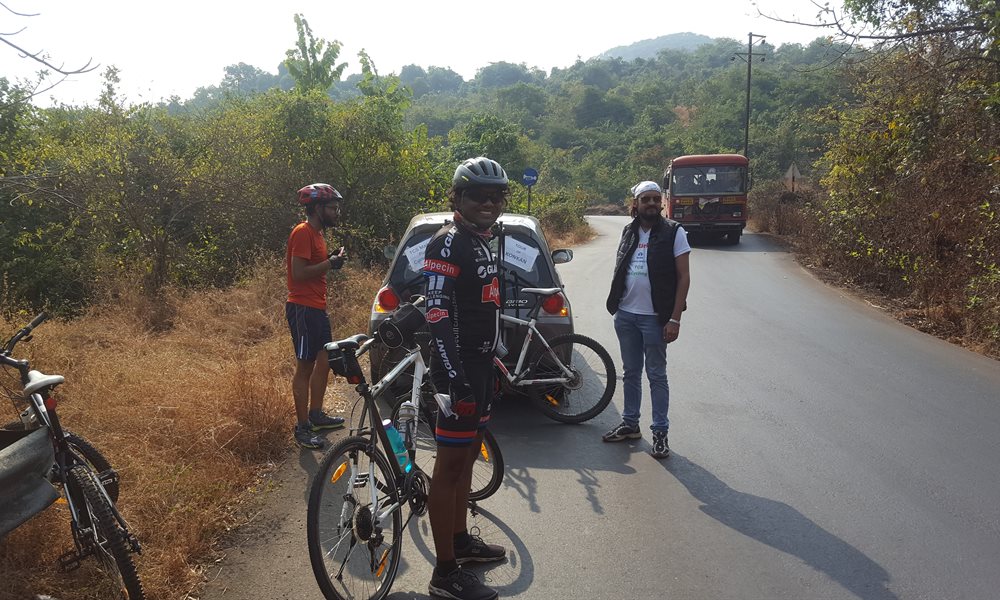 After that climb everyone were at larger distance with each other because of different pace and as we were cycling, we didn’t had lunch. We were just on water, glucose, bananas and stuff. So we decided to take a halt at a small shop on the road to eat something and also everyone gets together before moving ahead. We spend some time over there relaxing and having something to eat. We waited for almost one hour before starting the last stretch of the day. The remaining part. The reaming part was just around 30kms. 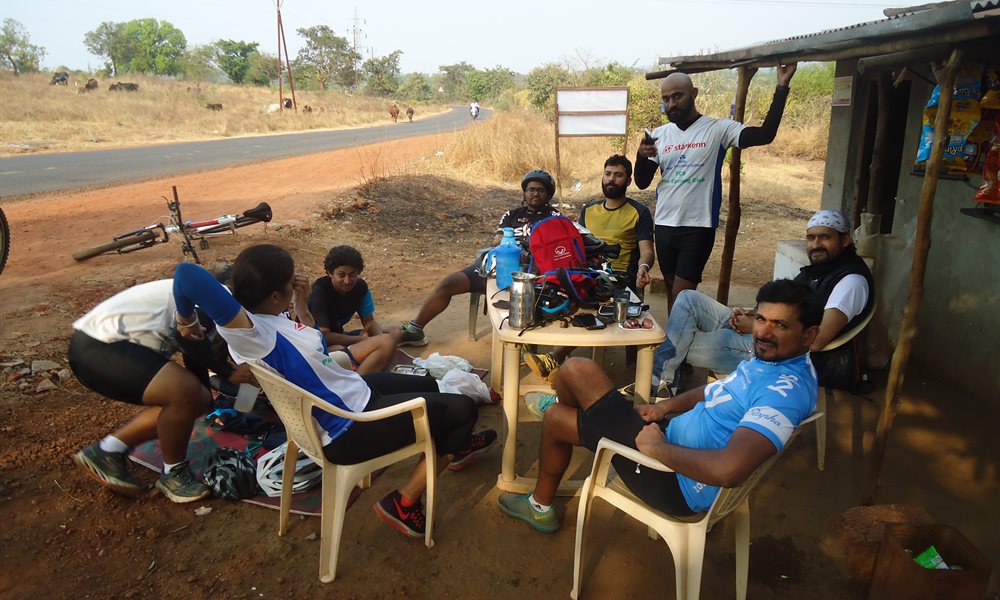 In this last stretch, for some part I was alone and no one of our group was nearby. People were either too ahead or too behind. I was worried whether I was on the right route or not. Because if I am on the wrong one, I won’t have enough strength for a detour of some ‘x’km. But after sometime of lonely ride filled with tensions of getting lost, some people from behind came nearby and I felt relaxed. And ultimately we reached Diveagar at around 6pm. Clicked photos, relaxed and later had dinner. This way day 1 ended with 148km or ride that too on ghats and I have achieved something which I never imagined. 148km ride in a single day :D 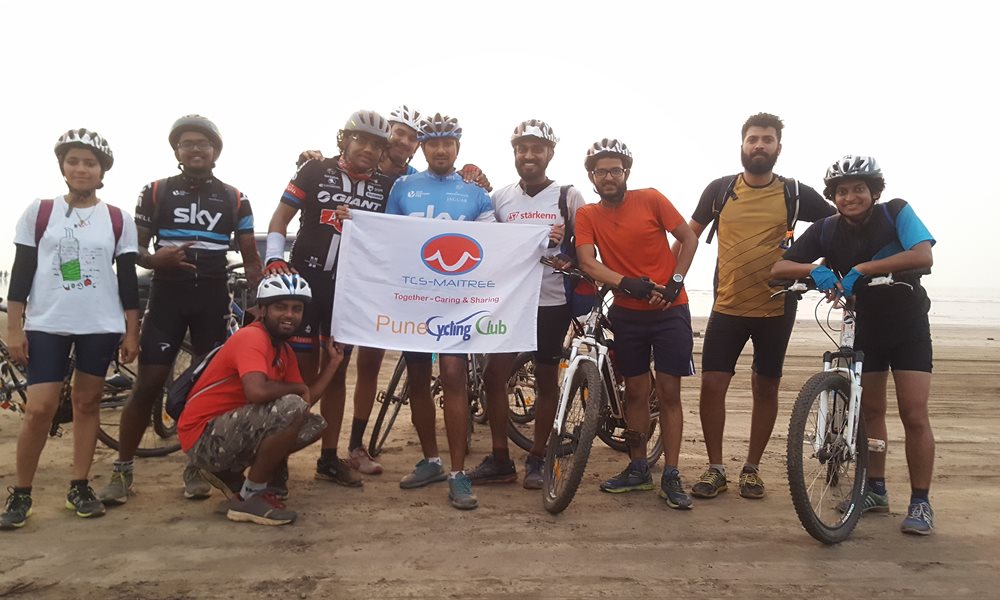 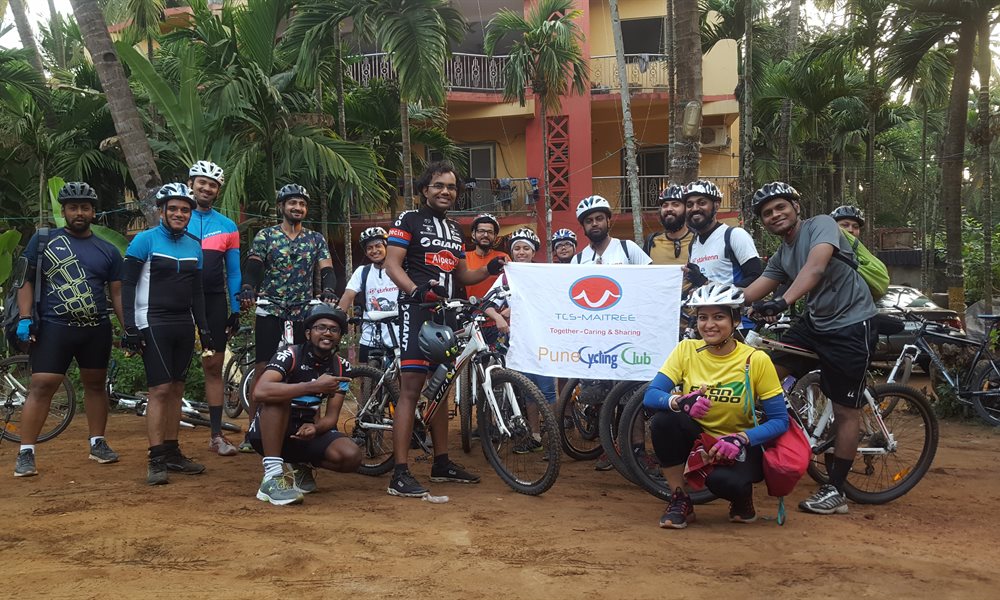 The second day was the relaxing ride from the Diveagar to Harihareshwar beach. That day we had little to cover. Just 30-40km. Today’s route was scenic with beaches at the side of the road. This day we enjoyed clicking photos at beach side at various beaches. Had good breakfast as well as we have little to ride and reached Harihareshwar at around 2pm.

This is me. You can compare with my image posted in the beginning of the post with this one 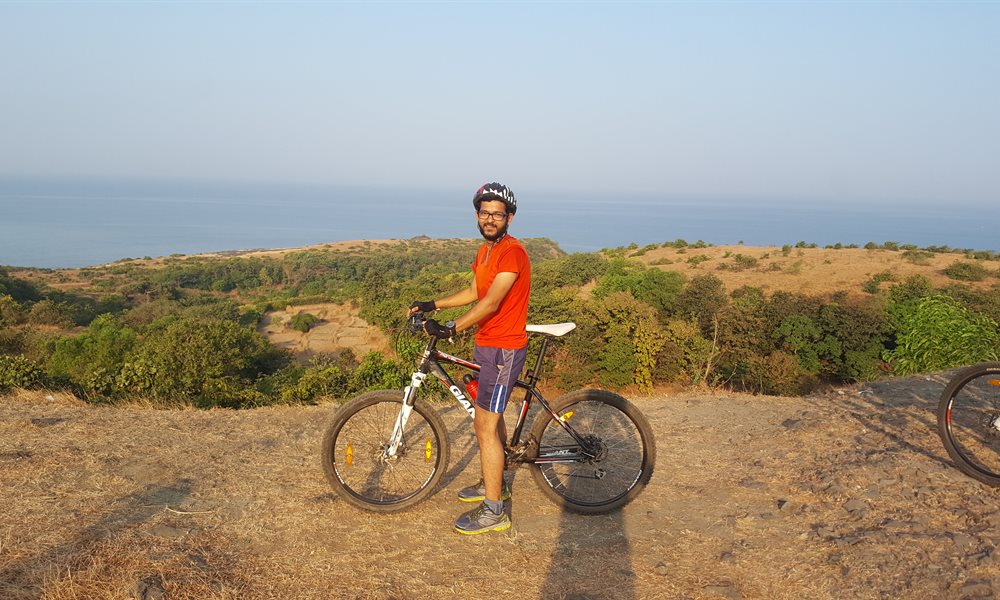 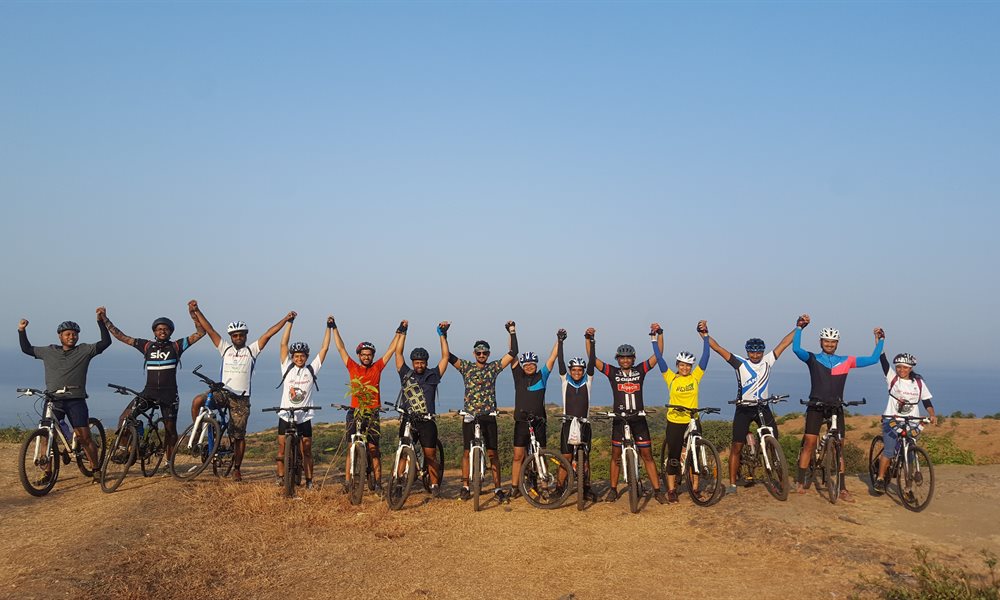 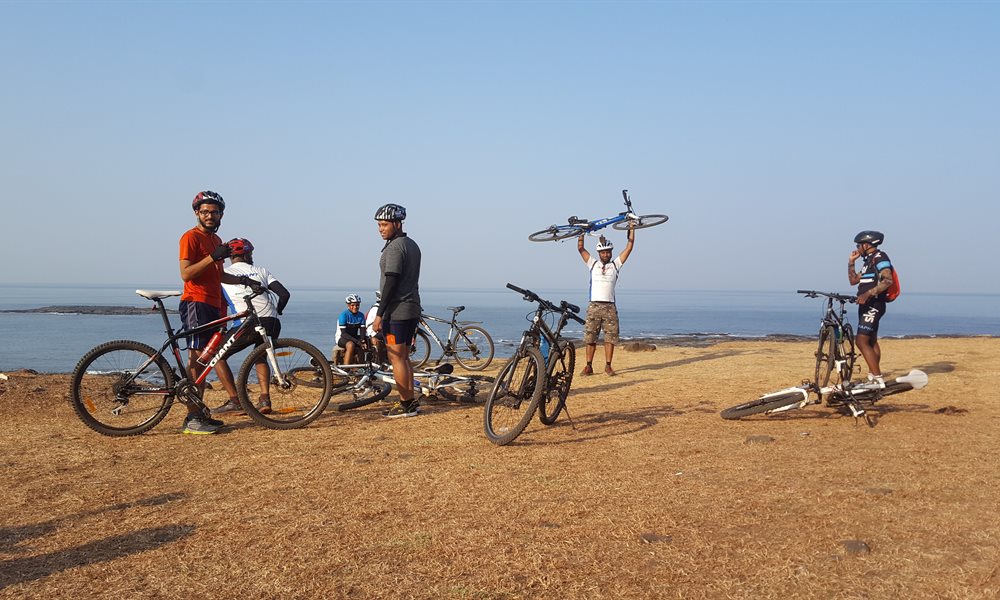 Riding the bike on the road with beach on the side :) 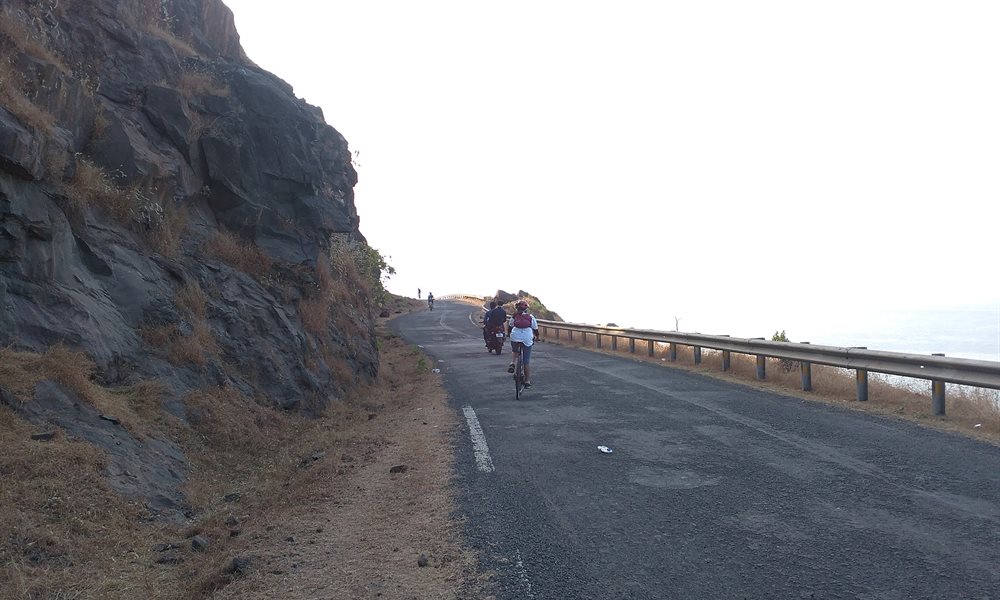 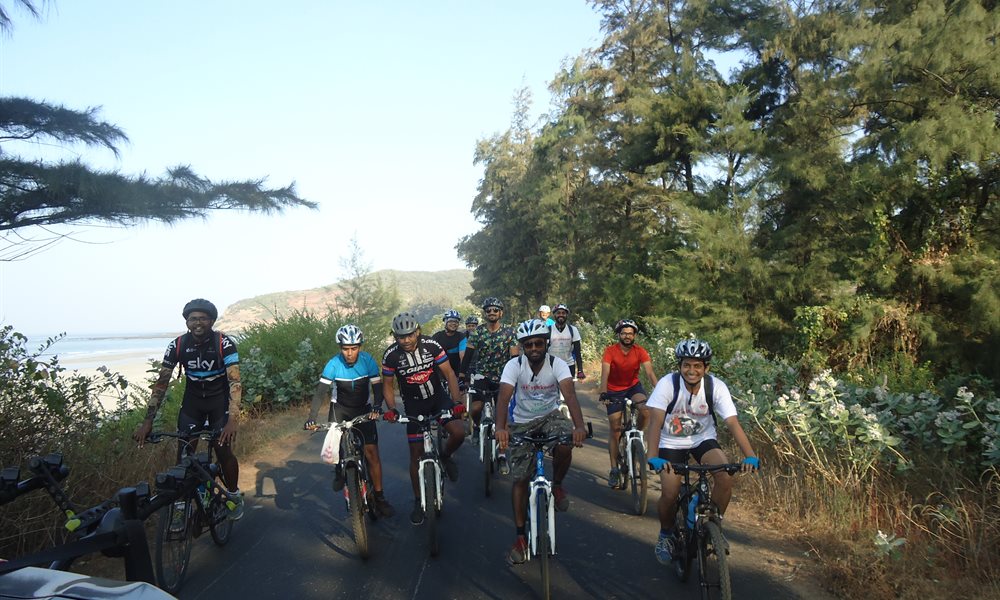 The closing photo of the trip and the opening of achievements of all of us :) 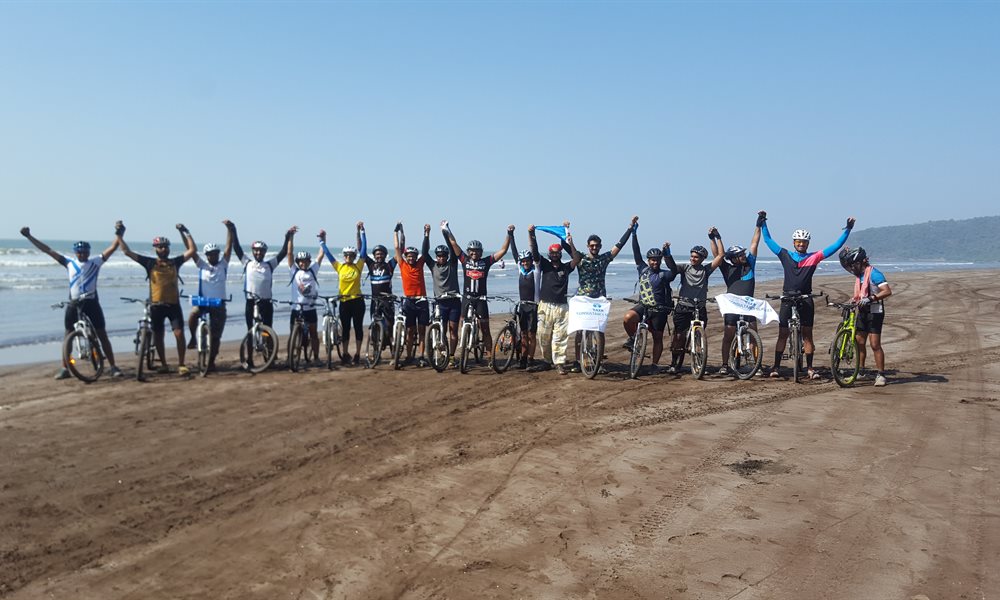 We had lunch there. Packed our cycles in the backup van and we hopped into our buses on the way back to starting point. And the breeze that crossed the face in the bus felt something different today as it had the sense of achievement in it. Today I was heading back with some achievement that will always keep me boosted throughout my life.

This cycling expedition mean a lot to me. I have learnt a great deal of lessons for my life as well. This ride keep me motivated in every aspect of my life thinking that if I can do this, I can do anything. I also learnt that team spirit is a must and how being in a team keeps you motivated and also helping each other. If I wasn’t in the group, I might have lost my mind in the first 50km itself. It is the group which keeps me boosted. 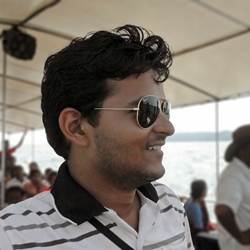