You’ve heard of one, but probably not the other.

We are about to change that.

Stok Kangri has, for years, been the “it” trek in Ladakh when it comes to limit-pushing treks, reaching an altitude of over 20,000ft. When people in the trekking community find themselves fit and experienced enough in the mountains to begin wondering “what’s next?” it is Stok that they set their sights on. At the threshold between a trek and semi-technical expedition, the Ladakhi peak has steadily gained fame and name recognition over the past several years, but there’s a new player on the field - Kang Yatse II. 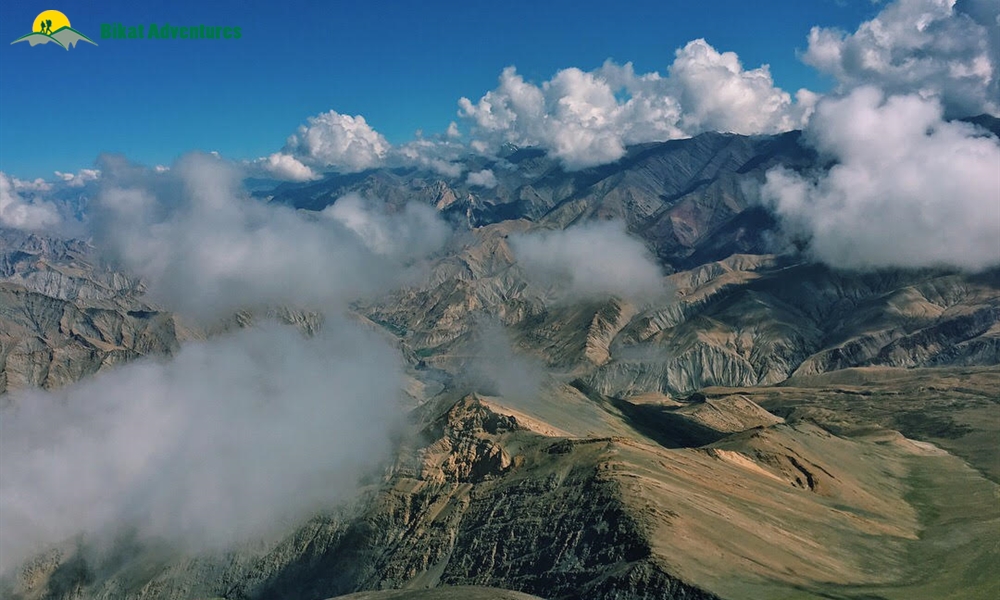 Enter Kang Yatse II, Stok Kangri’s bigger cousin tucked away a few valleys over at the head of Markha Valley, and very possibly the new “it” trek of Ladakh. From statistics alone, these two peaks don’t seem to be terribly different on paper, but several things set them worlds apart when it comes to the experience.

Follow along as the two giants of Ladakh come head-to-head in what’s sure to be an interesting competition in coming years. It’s the underdog versus the reigning champion- let’s see how they stack up against one another…

When it comes to an altitude comparison, both are monstrous, as far as trekking is concerned. Stok Kangri towers at 6,152 meters (20,180ft), with the summit of Kang Yatse II extending beyond that by just over 320ft at an altitude of 20,500ft. For anyone who has ever aspired to reach that 6,000-meter mark, these two peaks will both provide the opportunity to achieve this impressive benchmark in your mountaineering journey.

This is where the two begin to immediately distinguish themselves from each other. Kang Yatse II, which lies at the head of Markha Valley, is far more remote and requires a few extra days to reach. The expedition begins with a trek through the infamous Markha Valley itself, allowing for gradual acclimatization to occur as you pass through the cultural heritage of this special region. Throughout this route, you will encounter the ruins of three palaces, Skiu, Markha and Hunkar Palace, as well as Lhatos (religious shrines for local deities) and Mani walls (stones inscribed with Buddhist prayers). During peak season, a number of tented teahouses will be open for refreshment. 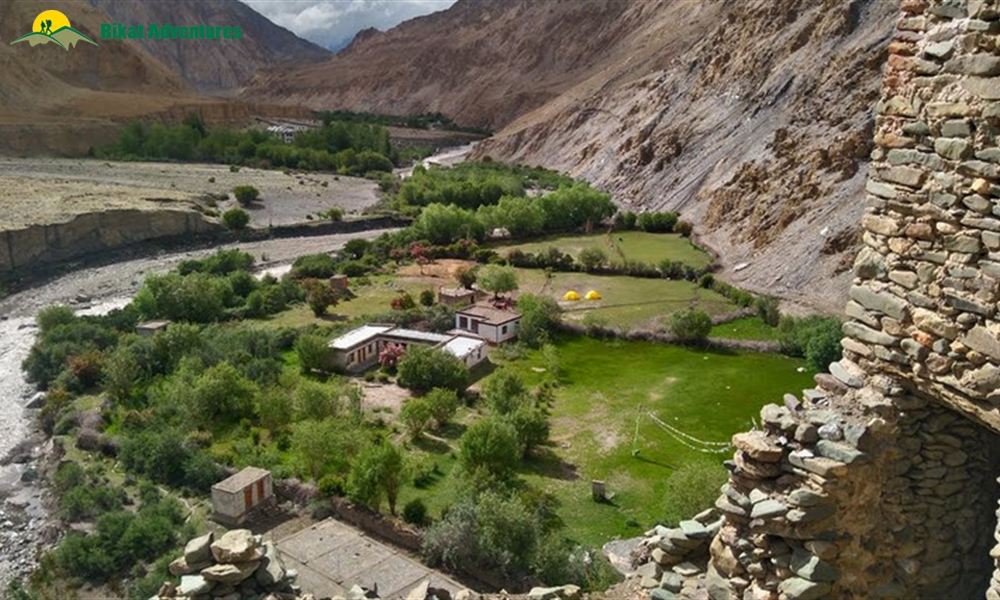 For those who have also wanted the beautiful experience of visiting Markha Valley, Kang Yatse II satisfies that desire, essentially allowing you to do two treks in one. Being a crossover trek, the trail to Kang Yatse II also does not return the same way it came, and so you get the added bonus of completely new views on your journey back home, including the unforgettable view from Kongmaru Pass after Summit Day. The terrain changes considerably as you venture further from your starting point, giving you a sample of barren mountains, green meadows, grazing pastures, colorful gorges and frosty glaciers- a taste of all that Ladakh has to offer.

Stok Kangri, by contrast, has one way in and the same way out. While Kang Yatse II has seven different campsites to explore along the way, Stok only has three. The trailhead begins in Stok Village, only a 40-minute drive out of Leh’s city center, and so feels far less remote. Stok Village also has a palace, fittingly named Stok Palace, that visitors can view, but beyond this point the landscape remains rocky and barren, save the occasional string of prayer flags or tea stall. 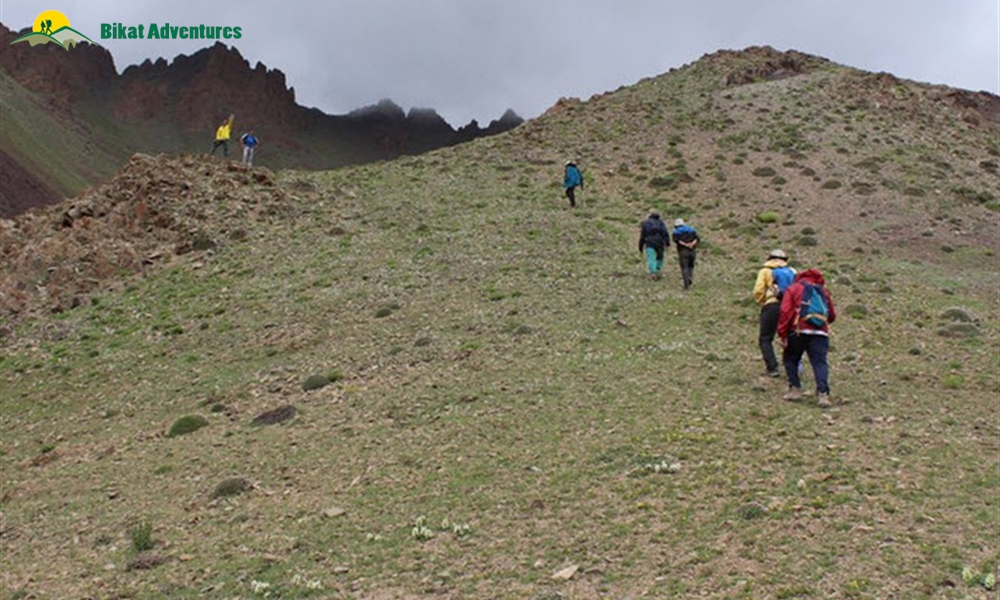 The approach for the summit is quite different between the two peaks. The summit push for Stok’s peak is a longer path than Kang Yatse II’s, making the summit rates a rarity. From Stok Base Camp at 16,000 feet, the ascent to the 20,000ft peak is a straight shot up 4,000ft.

Kang Yatse II’s path has an additional camp in between Base Camp and the Summit, known as High Camp. High Camp, where you rest before a midnight summit push, rests at approximately 18,200 feet, making the final ascent only an additional 2,300ft. This makes a huge difference in energy levels and time taken to reach the top, especially when it’s a race against the sunrise and melting snow.

Stok and Kang Yatse II are fairly comparable when it comes to their technical level. Of course, the extra altitude of KY2 adds a mildly extra element of challenge, but the gear requirements are more or less the same. On both, the summit push is the only section that becomes semi-technical once the shoulder is reached. Both require harnesses, snow boots, ropes, ice axes, gators and crampons for equipment, but for different reasons. 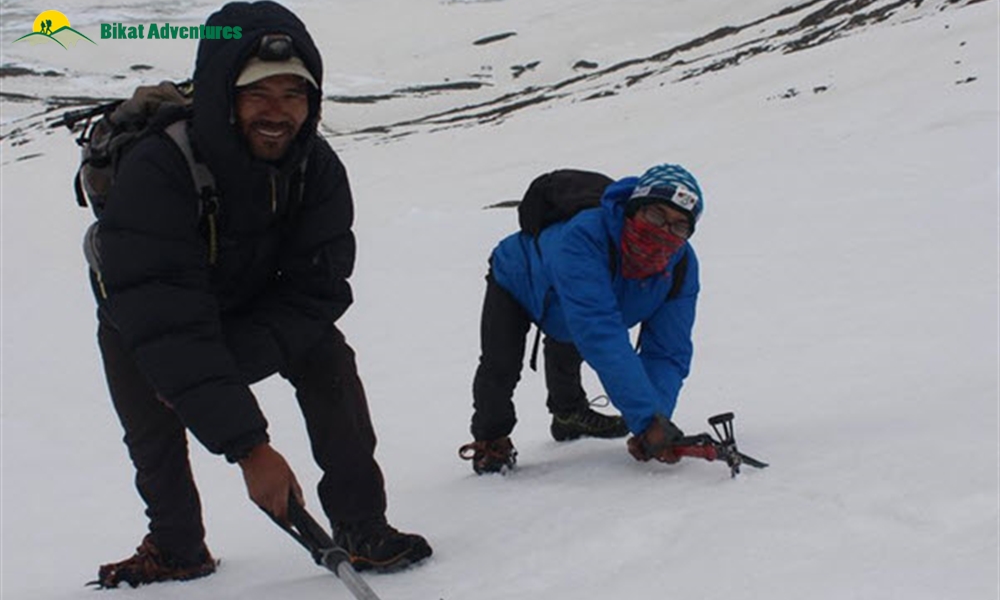 Stok has a very unforgiving, extremely steep ledge that you encounter on the ascent, mixed with patches of snow, depending on recent snowfall levels, with one small glacier patch- hence the rope system and snow protection. Kang Yatse II, by contrast, is almost guaranteed to have deep snow, given its face orientation. The ropes and harnesses are absolutely necessary, given the fact that the entire snow-covered section of the summit push is above the ablation zone of a glacier. Take no chances, and use the ice axe diligently to check for crevasses hidden beneath the snow. 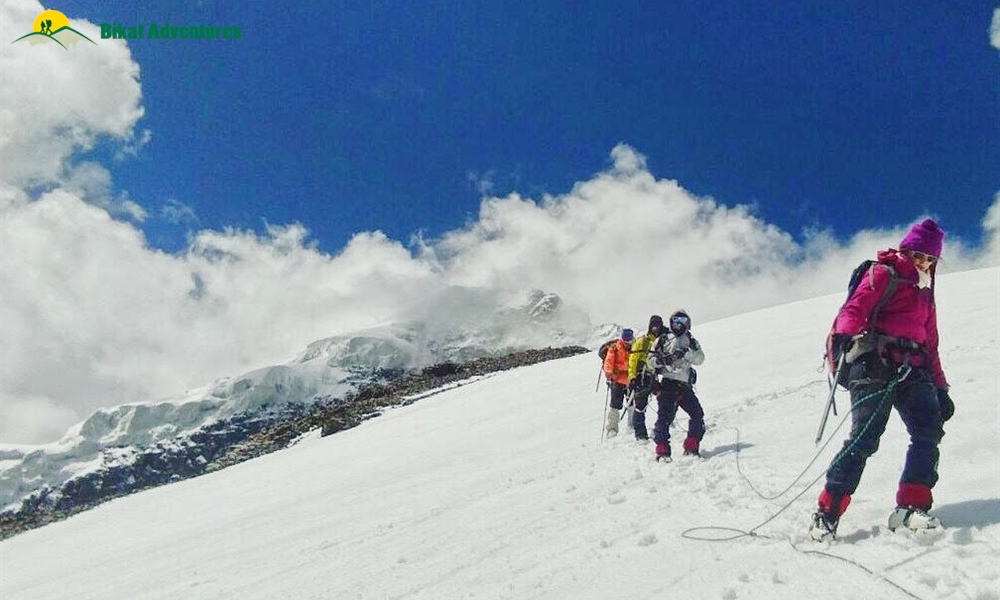 This may be the single-most differentiating factor between the two Ladakhi giants. One is infamous and the other is a seldom-attempted secret. There are benefits and drawbacks to both.

Stok Kangri, which has become a fully-commercialized expedition at this point, has steadily seen a price drop throughout the years. With massive demand from the trekking community to climb this peak, more infrastructure has been built around the “Stok Kangri Industry,” allowing trek operators to lower their batch costs.

The result, however, of the combination of its position on so many trekkers’ bucket list with the increased accessibility, is a massive spike in the number of people on the trail. If you’re looking for serenity, remoteness or untouched nature, you will not find it here. Base Camp alone has an estimated average of 100 tents on any given day during Stok Kangri’s peak season, and with 70 or so individuals making it to the summit each day, trekkers are oftentimes unsafely required to wait their turn on the mountain’s shoulder until enough space is available on the summit for them to fit. 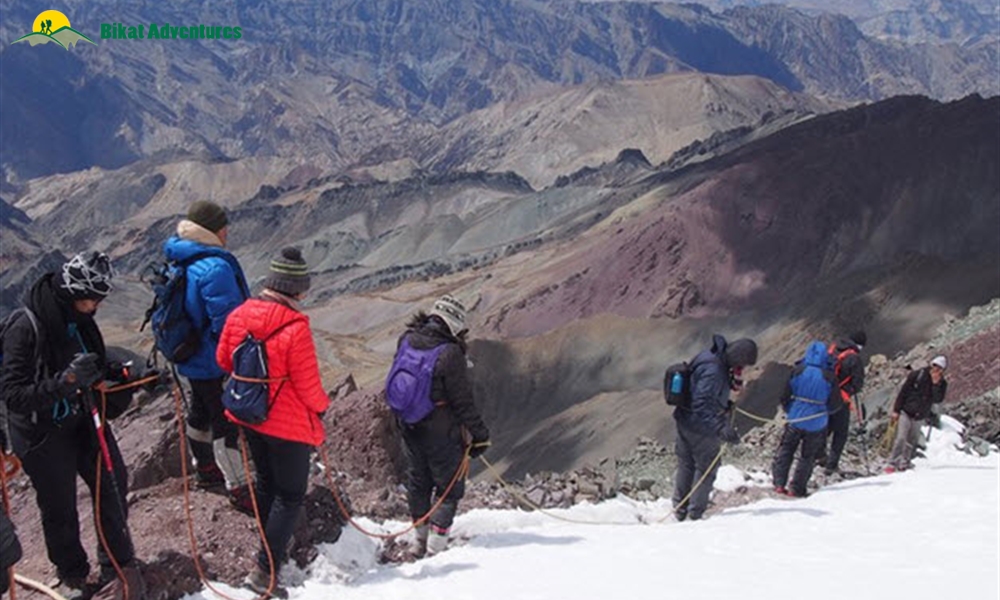 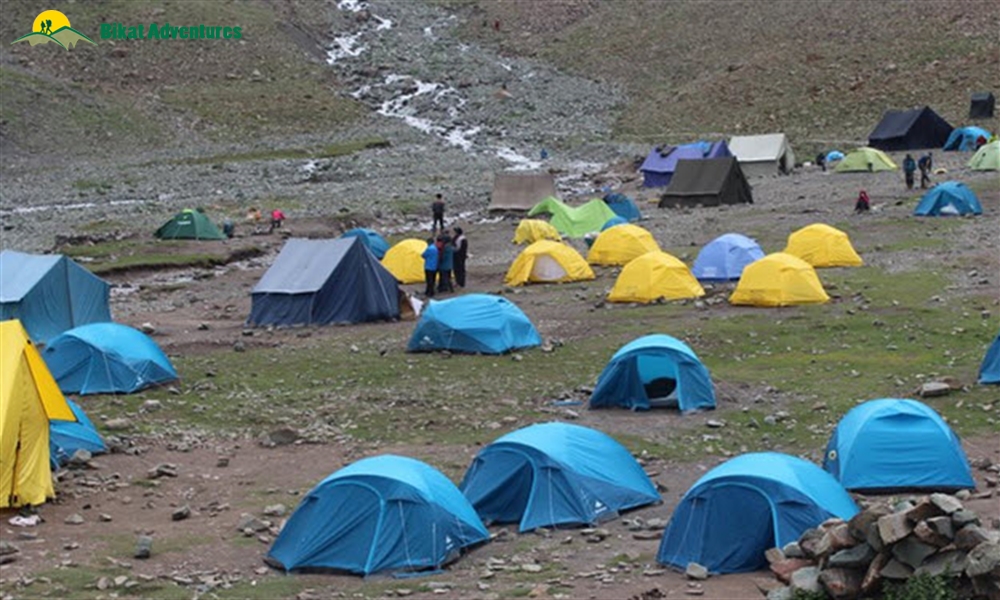 Kang Yatse II, on the other hand, generally has a maximum of two or three expedition crews per week that reach the Base Camp. It’s a different world there. You may encounter a person or two on your summit push, or you may see no one at all, giving the feeling upon reaching the top that your group may sincerely be the last people on Earth. 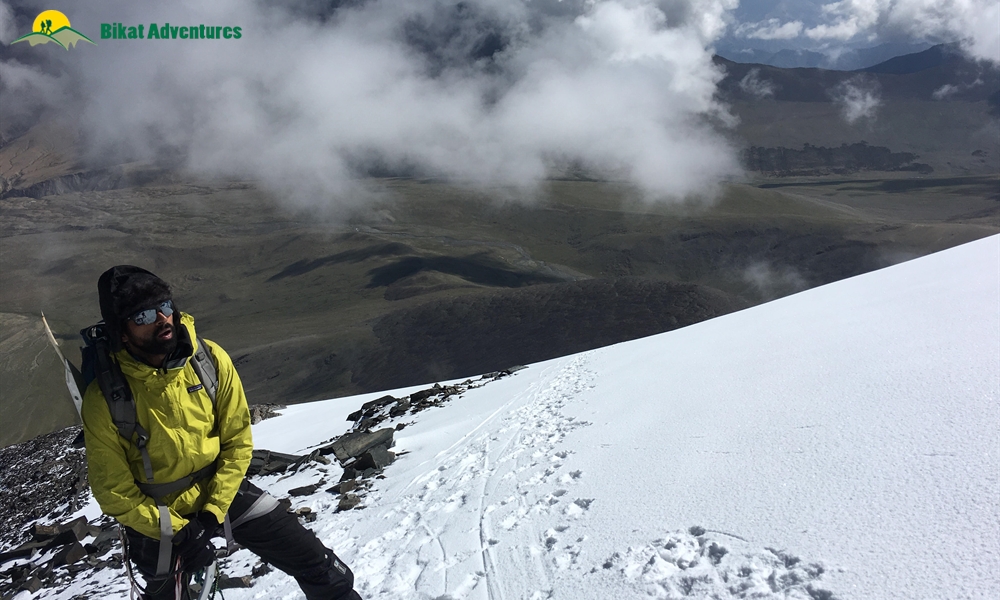 So there you have it. The giants of Ladakh face-off, and it’s a close one. Overall however, given the testimony and facts from both sides, Kang Yatse II becomes the clear winner in our books. The refreshing solitude, added cultural value of the Markha Valley trek and one-way, varying terrain-trail capture our hearts. Of course, don't take our word for it- use this information to guide your decision according to what you’re looking for in an expedition, and as always, have an unforgettable adventure.