Be it a sleepover, party, or even a charcha over chai, this story can turn some heads and get some attention. On December 5th 2020, a group of mountain lovers and I started trekking towards the mountain paradise of Har Ki Dun with Bikat Adventures.

We reached the base village of Sankri on Day 1. The real journey, though, began from Taluka on Day 2.

Our team, to put it lightly, was a mix of misfits from the city. This trek was an opportunity for everyone to get some peace after the 6 month lockdown that had put a stop to all activities in the country following the outbreak of Covid-19.

Once we started from Taluka, we were engrossed by the villagers and their local lifestyle. The handmade wooden houses, stone steps, and woolen garments reflected the simplicity of their lives and hard work. After crossing the village, we were treated to a magnificent landscape of the Supin River running on the left and a long trail winding its way on the right.

The first few kilometers of this trail were easy. It took us through beautiful nooks and turns, narrow lanes, and vast plains. We were brimming with excitement.

Many breaks were taken for refueling. When the break time exceeded, our generally genial trek leaders would turn strict and urge us to move forward.

After yet another break, we had just filled our water bottles, worn our rucksacks, and started to move once again when our local guide asked us to stop and rest. This was an unexpected but welcome surprise. 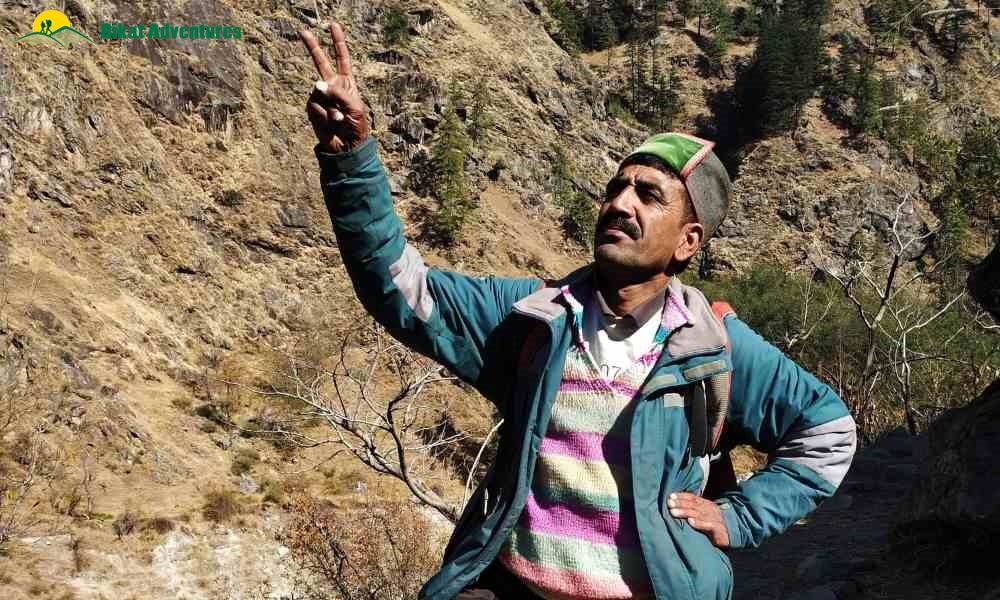 We removed our bags, sat down, and collectively let out a relaxing sigh. We wanted to make the most of this time because the breaks were always small and not enough.

However, as time passed, it became clear that something was not right. Our five-minute break was never-ending. I got curious and approached our local guide to enquire about the scenario. His expression was stoic.  Without uttering a word, he pointed out to a tree. The base of the tree, to my surprise, was on fire.

A faint smoke had just begun emerging from the burning wood. The local guide and I moved to the other side of the bridge to get a clearer picture. 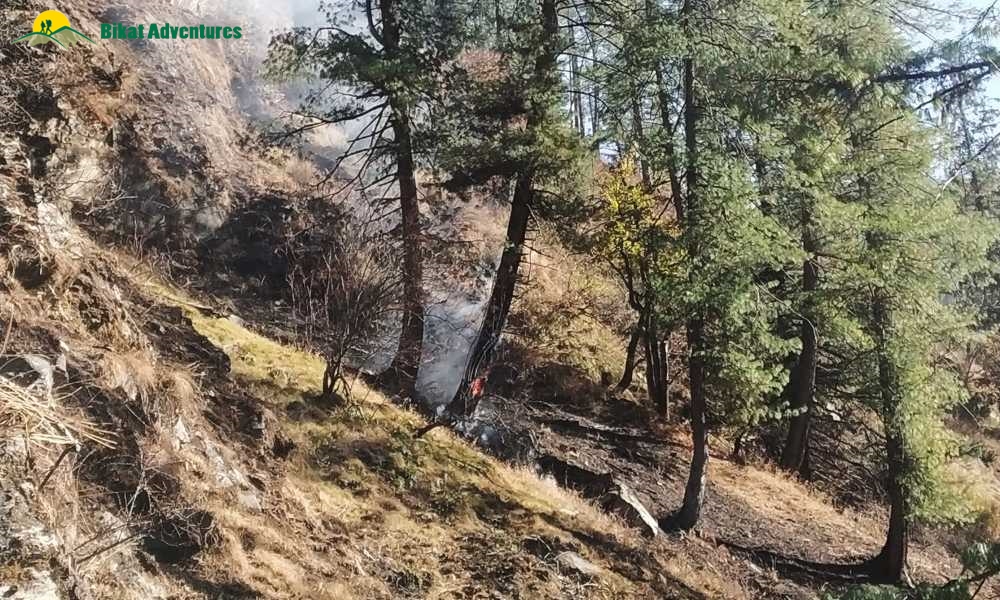 A tall pine tree, about 35-40 feet in height, was set ablaze at the bottom. After a brief explanation from our trek leaders, we understood that one of the villagers had set it on fire to cut it down. Since the villagers own basic tools like small axes and sickles and do not have access to modern equipment like chainsaws, they use this ancient method of setting fire to the base of trees to cut them down.

So how did this affect our trek?

The tree was located on a slanting surface of the terrain right on the route we were supposed to take. This meant the tree could roll and fall on anyone anytime because of the slanting surface.

If we were to wait for the tree to make its fall, we will lose light and the trails are difficult to navigate at night time. If we were to cross now, we had to risk the possibility of the tree falling on one of us.

After a while of waiting and the tree not falling, the trek leaders arrived at a decision. We were going to cross the terrain.

The mules started first. They carried our food, tents, sleeping bags, and emergency supplies. To make them move faster, one of our crewmates and the local guides began shouting in gibberish. The mules, contrary to our expectation, started running in another direction towards the top of a peak. They perhaps inherently sensed the danger in front of them.

A few village ladies who were traveling downhill in the same path noticed the mules running amok and rushed in to help. They caught them, controlled them, and took them past the burning tree to the other side safely.

It was now our turn. 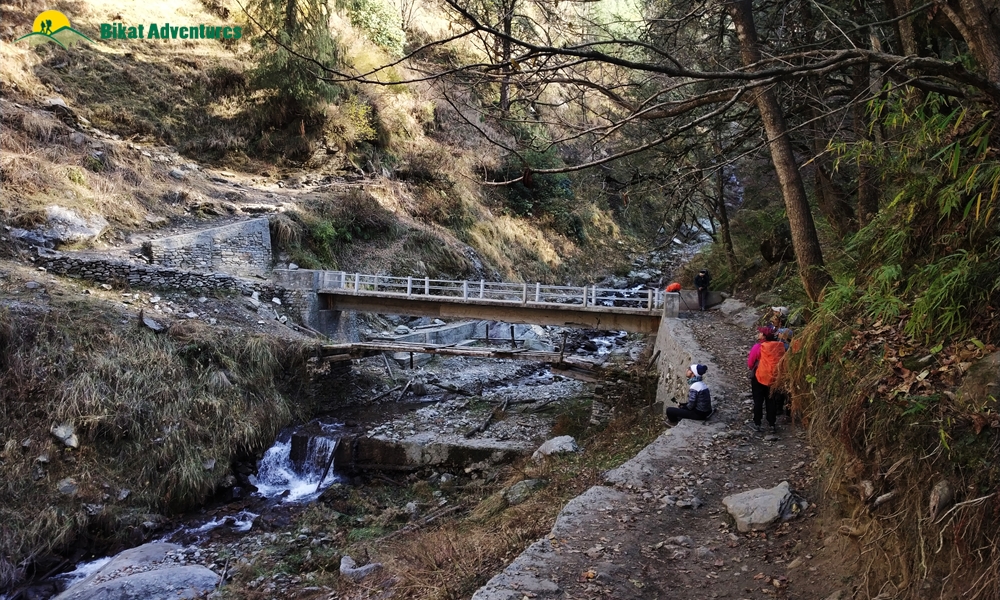 Much like a classified military operation, the guide and our leaders gathered in a small circle to discuss a strategy. The seconds were long, the silence was heavy and our anticipation grew. The smoke from the tree had risen higher and we could now hear the crackling sounds from the burning wood quite distinctly.

After what felt like ages but were only a few minutes, in reality, the leaders broke the discussion and a plan was made.

Our entire group was divided into teams of 2. There were 10 of us. So there were totally 5 teams.

When they blew the signal, we were to run to the ladies who had our mules and reach the safe zone. It sounded easy to me from where I stood. But, when I crossed the bridge, the elevation of the section we had to run through with our backpacks looked daunting. It was steep and long. I closed my eyes and prepared my mind with some motivational lines. Even before I could open my eyes, the local guide shouted in my ears to run.

I started sprinting towards the mules. After reaching a point, my lungs begged for oxygen and my legs begged for a break, the two things I simply could not afford.

The ladies on the top were shouting encouragingly, urging the group to cross the terrain quickly. I, contrary to how I looked, felt like an old horse struggling on a race track. After a few seconds, the burning sound of the wood sounded prominent.

I looked up to find the burning tree right beside me. The tree was huge, tall and the bottom was burning. Under normal circumstances, this imagery would have made for an interesting Facebook post. But this time, it looked like the devil tree from the gothic movies I watch.

I took a deep breath and started sprinting again. My lungs were struggling. My legs were cramping up. And right when I felt like giving up, I had managed to reach the safe zone. I dropped my bag and flopped down on the ground out of breath with my teammate who was in the same, if not worse, condition beside me.

We both laid there like dead weights on the dock for a while. Soon enough, the other teams had joined us. We were completely drained and did not have an ounce of energy within us.

Our trek leaders who were connected to the guide on the walkie-talkie finally followed. They ran through the line with ease and there was certain envy that enveloped us as we watched their agile forms make the cross swiftly. 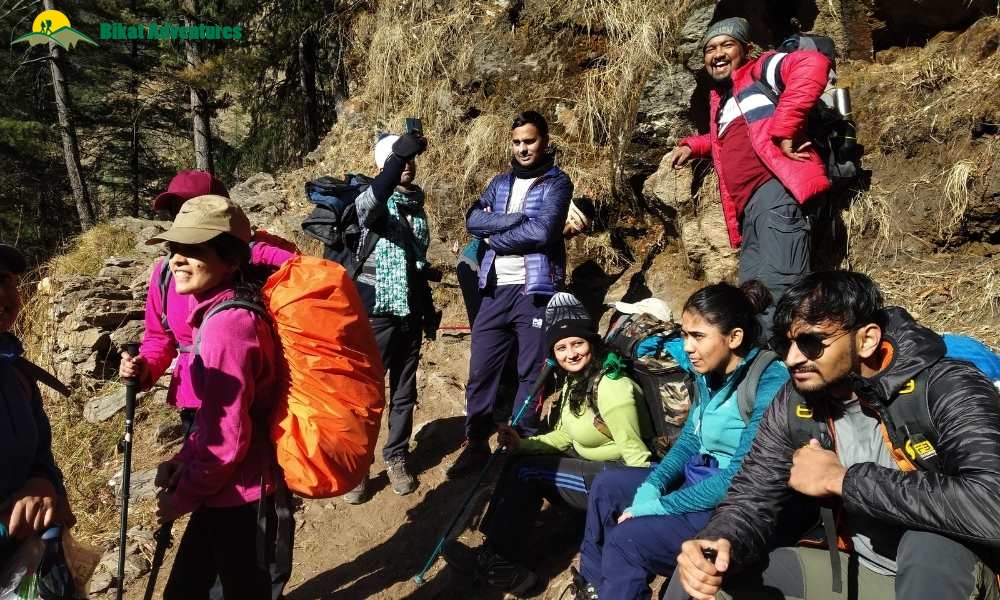 The guide who was standing beside us then uttered the following line that would stay with me for a long time:

“Anything can happen in the mountains”

Nature can be unpredictable. While trekking, it is important we listen to our leaders. Enjoyment is good, but maintaining time and good discipline is also a significant aspect of trekking. Our trust and respect in our leaders grew that evening and we followed whatever they said in the days to come.

When we had rested well and were revitalized enough to begin the trek again, one tiny disappointment still weighed in on the team. After all the running, panic, stress and efforts, we couldn’t witness the tree falling down.

We only got to see the remains of it when returning from the summit a couple of days later. The villagers had cut it down for firewood. Till the very last day, this story kept popping up in our discussions: a rare incident that makes for an interesting chapter in our book of travel :) 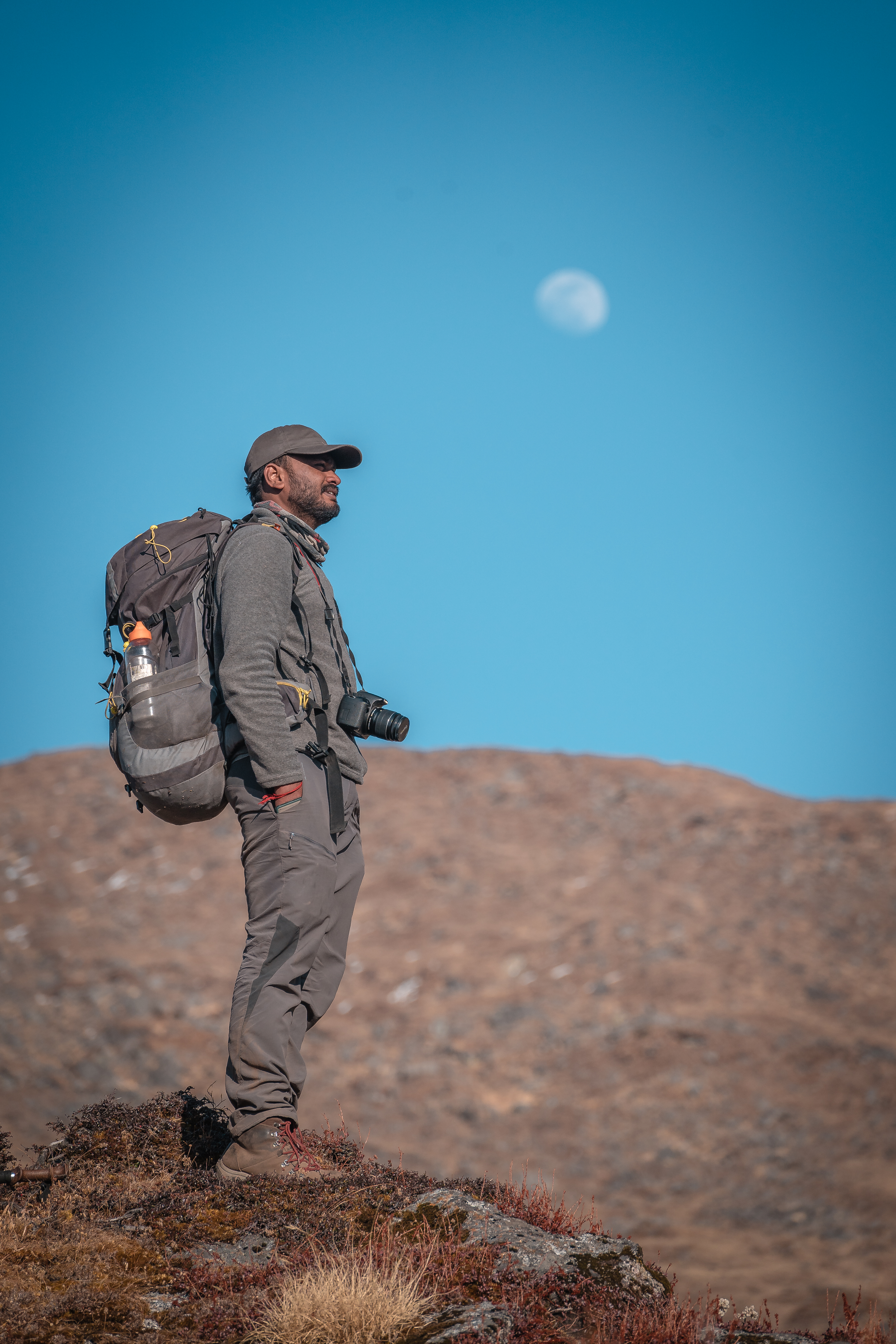