Fixed Camps? No. That's not the way to roll.

A lot of times we come across this question from trekkers about why we don’t set fixed camps on our treks like some of the trek operators have been doing.

People think it is a smart strategy and a more convenient option. It saves everyone time that gets invested in setting up the camps.

What they don't know is how much convenient the idea may appeal to them, it is not ethically and ecologically right.

I discussed the issue of fixed camping with Ritvij,  one of the co-founders of Bikat Adventures and here is what he had to say.

“Trekking is an activity that is not just about walking on mountain slopes but unfortunately it is becoming like that. Trekking is way beyond walking! When done in a group, it’s a proper team task. You need a leader of the team who can strategize and plan and you need team members who can play their part. In fact you need team members with different skill sets to complete the task better - Some aggressors who can lead the way and pave it for those who follow, some caretaker who can be sensitive to the needs of all members, and some sweepers who are so patient that they can motivate even the laggards to complete the trek.

If you have some technical people like mountaineers, photographers, bloggers as part of your team, then even better. You are up for a great team experience. I have been an HR professional and seen how team building games are useless but I can vouch for creating a team through trekking and defend my claim even in a court of law!

Fixed camping kills the team aspect of trekking. If I don't even know what all equipment we are carrying with our group, who all are supporting us for carrying the common logistics, who would be our cook, who would help us in our camping tasks, how do I even start to think of this group as a team? I cannot accept trekking as a check in - check out model activity where instead of traveling in a car, I am walking between hotel camps! Trekking with rolling camps is rough, it is a bit messy as well but you are completely independent and can be fearless in the wilderness if you are with your team. You have everything that you need and if needed, you can start and stop anywhere.

We decided on Day 1 that we would never use fixed camps but now our trekkers do not find any campsites in the towns that people set up on popular treks. I am not kidding. Just go to Kedarkantha trek and see the base camp. It looks like a bloody town! We move in smaller groups, we brief groups as teams, we introduce everyone to everyone, our staff is fixed for groups and not camps. My teams on any of these treks would be the first to reach a campsite but what is the point! We would have to settle up for a compromise. The result is that even we have to think of ways and means to capture a site for our groups.”

After hearing his point of view, here are some points I gathered from my understanding. Let me explain 4 major disadvantages that I want to highlight to substantiate my argument:

1.Nobody owns the jungle.

A forest is a no man's land except for Forest Division. A trekking operator has no rights, whatsoever, to claim a “campsite” and establish their authority. Everyone has an equal opportunity to camp at a site and use resources.

No organization or division gives trekking operators or locals a right or permission to do so. So, in a way, fixing camps is unethical. 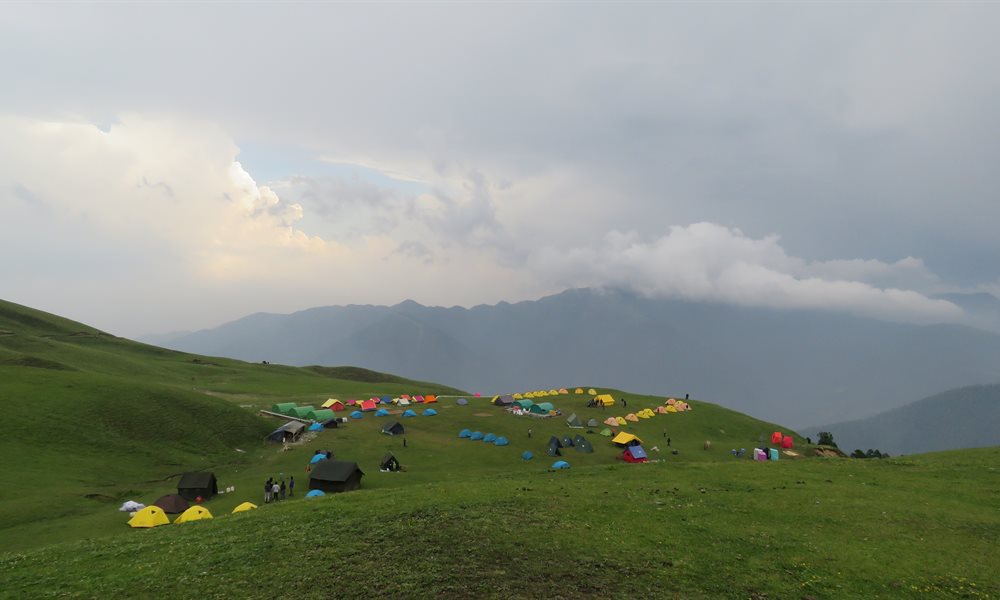 2. Over-exploitation of a campsite

Imagine you laid your hands on a big pot of gold. You used all your gold extensively without saving or investing it anywhere.

Now take this pot of gold to be a campsite. Someone who fixed their tents there over exploited water and other resources without giving it any time to replenish.

The end result: that part of land is impacted adversely.

Had rolling camps were fixed instead, it not only would have given the time for replenishment but also avoided over-exploitation. It is called distribution of resources. 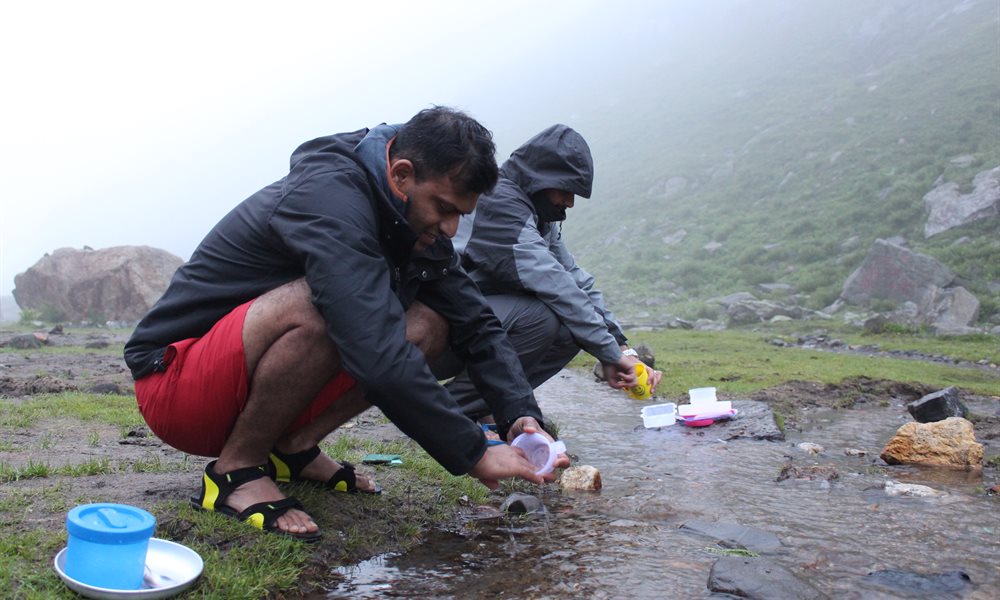 You are not really leaving 'green trails’ behind if you are camping at one place for 3 months.

It makes a campsite all cramped up. More the people, more accumulation of human and other waste there will be. No matter how many gunny sacks of garbage you bring back from the trail.

A small group going on rolling camps would never have more than handful of non-biodegradable waste that can be easily carried back to base by the group itself. It is like creating landfills of waste in cities and then thinking of ways to deal with it. It is always better to capture and segregate waste in much smaller quantities and push it for either recycling or decomposition.

Besides, people don't take cleanliness seriously when they stay at a fixed campsite. Everyone rolls the responsibility to the organizers.

NEWS Flash: It is everyone's responsibility. 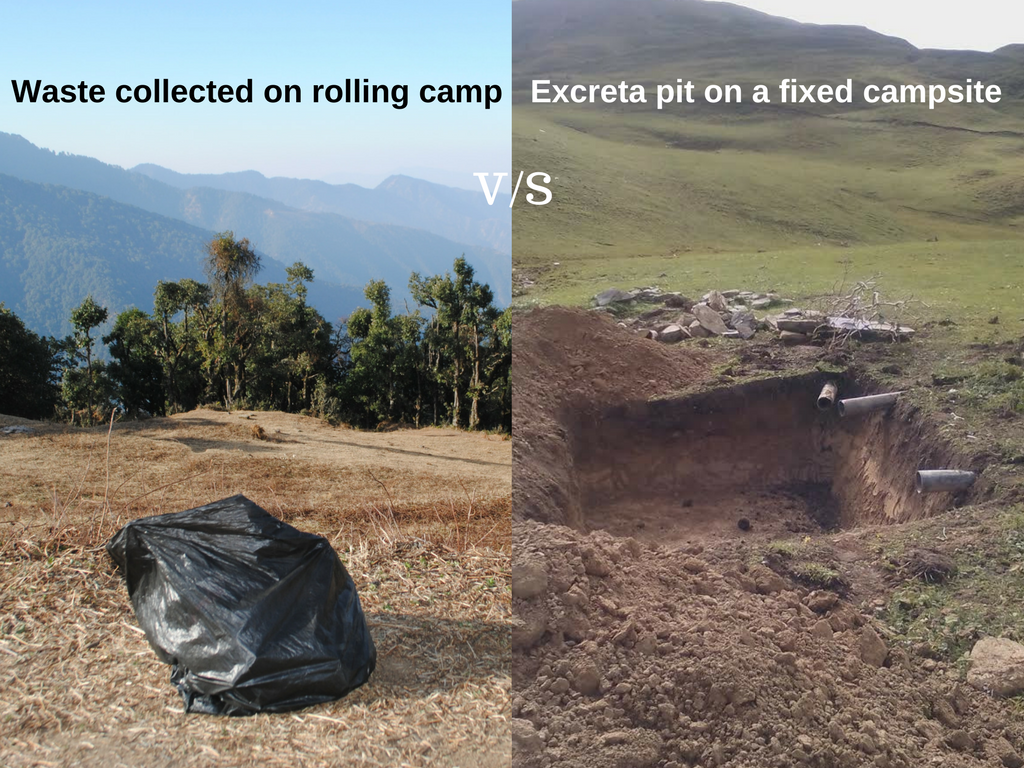 4. No check-in check-out experiences in the mountains

So you want a check-in & check-out experience even in the mountains. Where is the fun in that?

You signed up for a trek because you wanted to enjoy the adrenaline rush. You wanted a chance to be an explorer. So, here it is.

Having rolling camps ensure everyone in the team is aware and responsible for the outcomes. It means that you get involved in everything like setting up the camps, removing them, reaching the campsite on time (at least the aggressors of the team). That's how you come together as a team.

And that childlike feeling of curiosity of reaching the next campsite which you can choose on your own, that's where the actual fun lies. Go on the unique Bikat treks (remote ones) like Bali Pass, Vasuki Taal, Kedar Taal, Pin Parvati Pass, Markha Valley, Panwali Kantha and you will exactly what am I talking about. However, in the township treks like Kedarkantha and Chadar, it becomes impossible to a large extent. 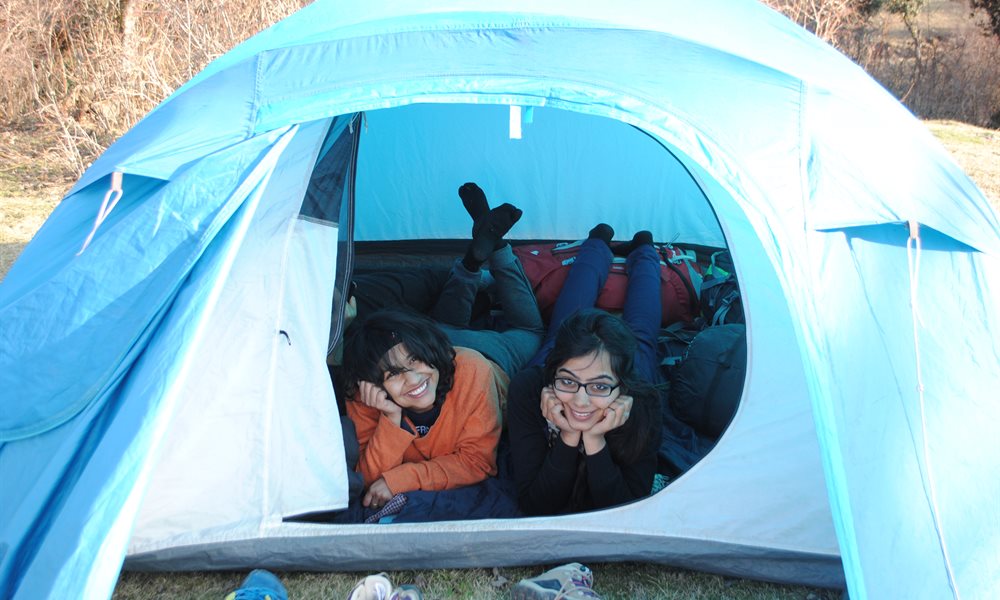 Trekking is a team activity. So much so that when you go for a mountaineering course, first thing they tell you is to never go alone in the mountains. Team may not always mean 11 or 12 members, even 2-3 people create a beautiful team.

Fix camping is injurious to Team health. Simply put, it kills the fun of trekking.