Not for the first time, I happened to find my weekend in Lonavala, this time for a hike to Rajmachi. April is an unusual time for day time hiking, so our walk to Rajmachi from Lonavla was entirely at night. The specialty was the almost full moon that brightly lit the entire trek, I will elaborate on that later ...

The credit for this beautiful weekend once again goes to SG-Trekkers. My impulsive decision to go again to Lonavla this weekend was mostly based on the lovely times i have had with them this year. Ladies dominated the group statistic this time, we were 5 guys including the two coordinators, and 11 ladies ! Its funny when people think girls don’t trek that often, I have seen women are always the more enthusiastic hikers. There was a funny discussion where a lady pointed out that she had gone shopping that day with in-laws/relatives and now had five new saris but little did the relatives know that she prefers track pants to go hiking! We boarded a local from Shivajinagar station in Pune. Once more, like last weekend, I found myself drawn to the drafty gates of the local and within minutes i found myself sitting over the edge with legs dangling carelessly outside. Watching the sunset hues merge and dissolve into the velvet darkness of a dry April evening, we were in Lonavala shortly before 8:00 pm. On schedule. A little hilarity ensued when the railway official checking tickets on the platform stopped us and alleged that we disembarked not from the local but an express train from the opposite platform and hence we were not showing legitimate tickets. The hilarity of this allegation got only laughter from all of us, after some convincing  he let us continue. 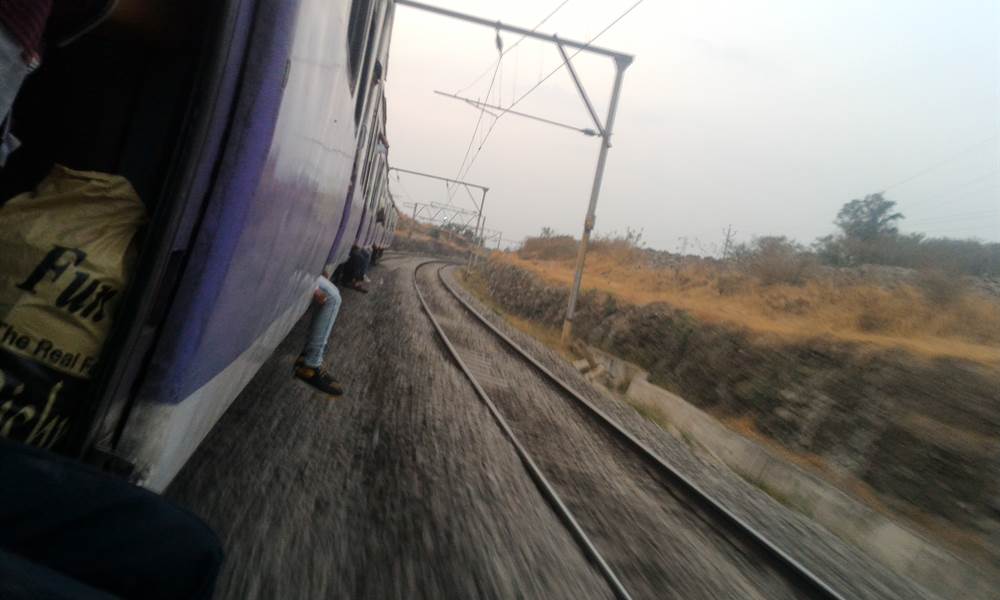 Like the last trip to lonavla, we dined at the State Bus Transport Canteen at the bus stop. Due to a mix up between the cachier and the cook, we ended up getting additional dinner as compensation. I would have welcomed this freebie but we had 16km to walk in the darkness. Full of food and merriment we had a quick round of instructions and introductions and were off to seek the trail to Rajmachi. This involved a lot of walking on the main asphalt road and we were all busy in some chat or the other, getting familiar with everybody. Somehow I ended up boring a lady with the science behind memory recall and amnesia, with types and examples from movies. I talk useless trivia stuff like that often, its funny she heard it all, hikers are always polite to me this way :-) I hope she remembers the difference between Deja Vu, Deja Vecu and Jamais Vu. I clearly remember spending a long time explaining that one !

Somewhere right after around I had finished telling the plot of the movie 50 First Dates as a popular example of Anterograde Amnesia, we reached the starting of the Rajmachi off road trail. The Trail itself was just a kaccha road, even motorable to some extent, and if my recall of a youtube video is accurate, a popular off-road cycling route. The conversations flowed unimpeded as we trudged along in the silver moonlight. 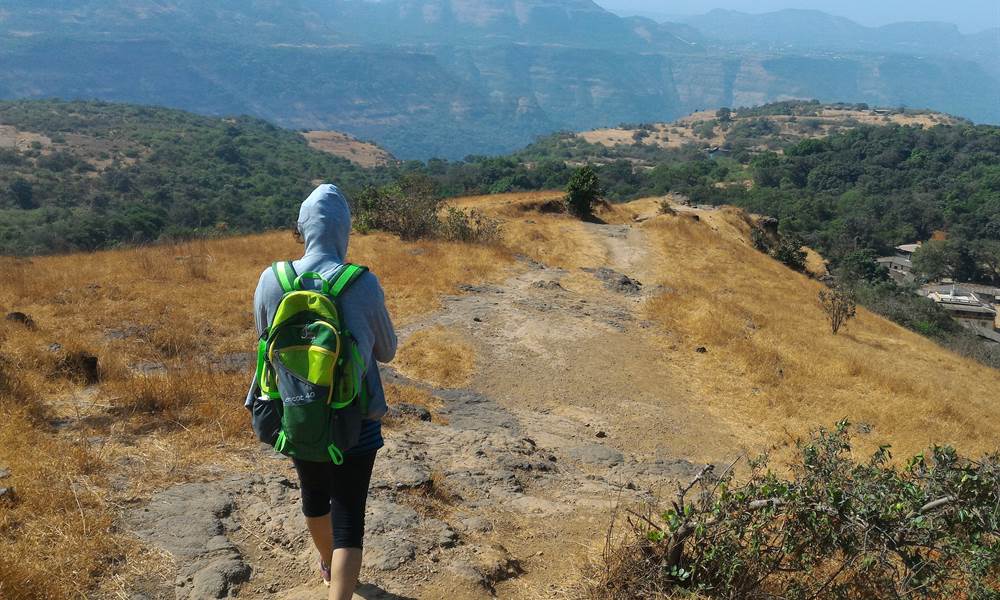 After trudging further on that route, the tracks were notorious for being dusty and we could feel it. Out footsteps raised clouds of dust and whoever was unfortunate to fall behind was lost in a cloud of dust. Coughing and spluttering usually doesn’t enhance a moon lit night and it did not that day either, though people did indulge in a game of antakshari which is always a delight. Perhaps the most beautiful thing that night was the sight of the Rajmachi fort in the moonlight. I cannot assimilate enough adjectives to describe it beauty. Its one of those sights where you get lost in the moment and it never occurs to you that a stupid thing like time exists.

Just a little before three at night we arrived at the base village where we were to lodge till morning to continue to the fort to witness the sunrise.Though accustomed to midnight trekkers, the village dogs barked at our incursion. So cute. However, like good mannered homo sapiens, we did not bark back, we wanted to sleep.

We found our sleepy host (hikers are not a pleasant sight at three in the morning) and a large room was arranged with mats to sleep on. Outside we could see people sleeping all around in sleeping bags. After all, Rajmachi is a popular place to hike. I slept as soon as i hit the ground, people tell me that the ability to do that is a good thing.

Morning was a very very alarming. I mean, literally. Someone's alarm screamed (for the lack of a more accurate word) and screamed and screamed till the dead were awake and the living had transcended in a state beyond awake. I slept a little longer after the alarm had been assassinated. Following that I woke up rather good mood, and noticed the room almost vacant. I found that it was still kind of dark outside, and all had disappeared to do some morning duty or the other. Soon the morning twilight enabled me to orient myself in the dark and i could make out the outlines of the village and the terrain nearby. I just sat there outside observing people go about brushing, washing etc. I noticed the guys regularly disappear and appear from the forest beside the house. My bowels noticed it too and like any self respecting human I took a spare water filled bottle i had and floated demurely into the enticing forest. Without going into the details, I must say, the morning twilight hue slowly turning cobalt blue and the morning birds chirping and the breezeless cool morning overall alleviated my sense of disgust of defecating in the open.

After a quick tea we started trekking towards the fort looming over the village. It gets bright fairly quickly once the sun is about to rise and in minutes it was bright enough for the regular cellphone cameras, that slows the pace every time, no wonder night treks are quicker. 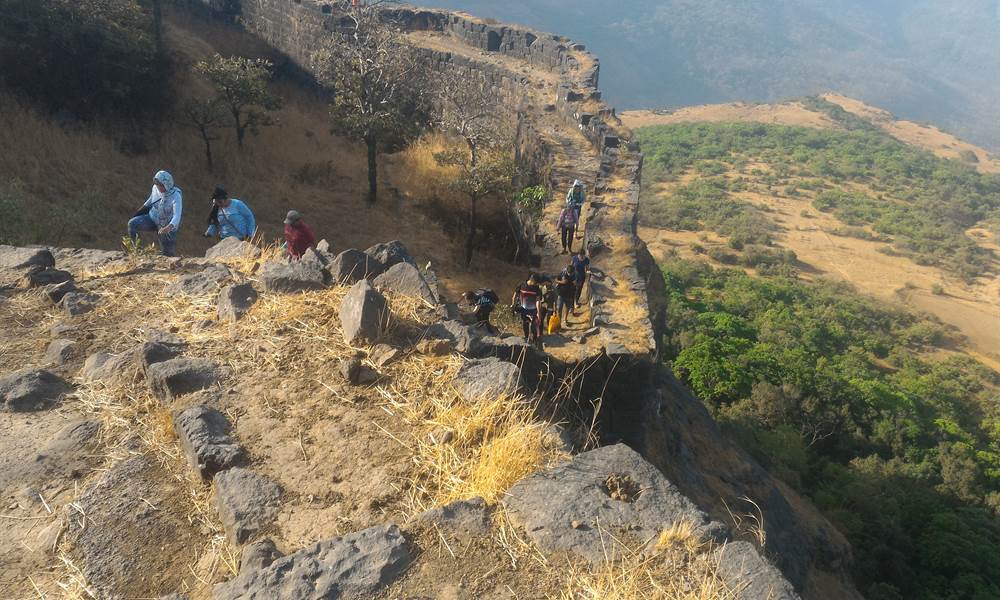 After the mandatory silhouette photos we hiked to the tallest spot of the fort, adorned with a flag, providing a generous 360 degree view of the valley around. We could spot Duke's node and even Matheran from there. I forget the name of other places. A place called Horseshoe Waterfall too I think. We took plenty of memorable pictures and even the official group photograph. It was quite sunny by the time started the descent.

We trekked further to adjoining Harshvardhan machi (?) I forget the exact name. Since the day didn't hold much trekking we were restless and just out of sheer boredom started scaling a random gate of the fort. Its fun how hiking turns almost anything into fun.

We started the final descent to the base village for breakfast. A funny incident with a lady here taught me a important lesson : Wild cousins of popular fruits and berries should not be consumed at the merry sight of it. 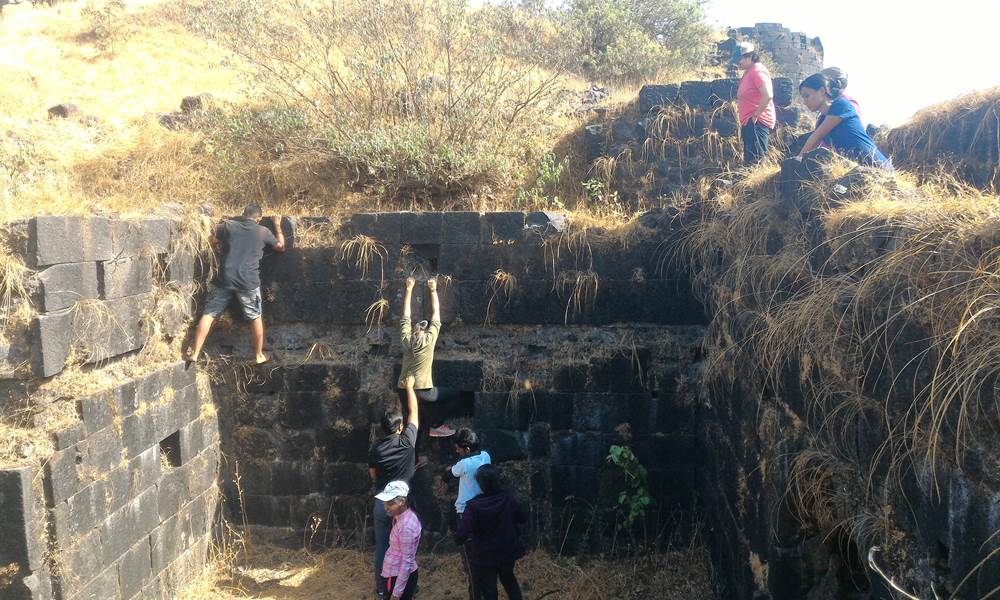 At the base village we had Poha for breakfast. Its always poha for breakfast when hiking, light on the stomach and filling. I continued showering reluctant hikers with my unwanted trivia, this time on how altruism isn’t a genetic trait, it is not human, it cannot be inherited and must be acquired artificially. Giving examples from Richard Dawkin’s “The selfish gene”. I was rather surprised when a lady asked me whether I had read Sapiens the book. I was surprised because someone was actually listening to what I was saying ! Before we left we went down to the village reservoir for some fun. The april heat was already on and we needed to cool off before we took a taxi back to Lonavala. The reservoir was not natural but had had plenty of tiny fishes and algae etc .. After initial hesitation four of us guys jumped in the pond to join the fishes for a pleasant cool off.

The ladies visited the adjoining temple and went back to the village. We followed in about an hours time and once packed up we waited for the cabs to arrive. I once again caught myself napping while everyone was busy packing. Somehow this ability of mine got me a comment from a lady that I am the “happiest man on earth” to be able to do that, i.e. sleep anywhere, anytime. Feels nice, being the happiest man in the world. We then left the base village in two taxis whose audio systems were stuck in the early 90s and we lent our ears to melodious songs of treachery, loneliness and  unfaithfulness in otherwise a beautiful morning.  Around 2:30 pm we were at Lonavala station to catch the 3:00pm local back to Pune. The journey back was quick and comfortable and the ladies even started antakshari in the train. That is always fun.

And just like that, another beautiful weekend came to an end. Rajmachi in moonlight April night, I will remember that for a long long time. 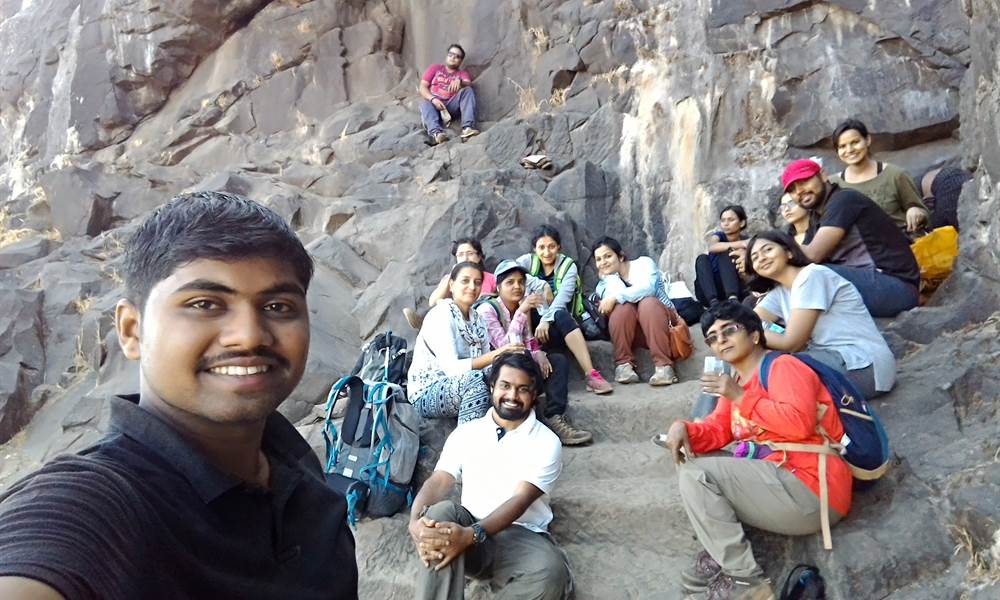 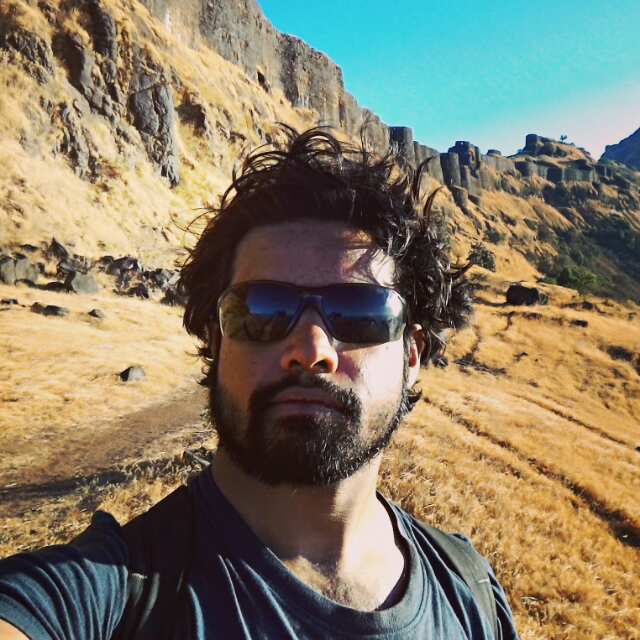