How was your long weekend?

The long weekend at Bikat Adventures was completely jam packed. With so many treks and expeditions lined up on the Independence Day Long Weekend, the things at our store in Jagatsukh, Manali were in a great commotion.

I happened to be at the store where I could see our trek leaders taking care of all the necessary arrangements so that no participant faced any kind of inconvenience on the trek. That was when I truly realized that being a trek leader is no cakewalk. It is a job clad with great responsibilities and challenges.

A big shout out to all our ‘Mountain Heroes’ a.k.a Expedition Leaders who give their best to make our expeditions successful, safe, and fun.

Don’t be disheartened if you weren’t able to make on any of the treks on this long weekend. The gates for much-awaited treks of the year like Roopkund, Rupin, and Goecha La have been opened now.

But first, let me begin with sharing updates from the recent treks.

The third batch of Manali-Leh cycling was presided by our Expedition Leaders- Wakil and Lalit. The batch went spectacularly well. The adventure started with downpour because of which participants faced fog issues till Rohtang Pass. The weather was sunny thereafter until the end.

Our Trek Leader Lait played the role of Good Samaritan helping the two of the cyclist from para-cycling batch that had come with another group. He helped them cross the Pagal Nallah before Sarchu and was applauded by the participants around.

The fourth batch is on its last leg. The updates will be provided in the next issue. 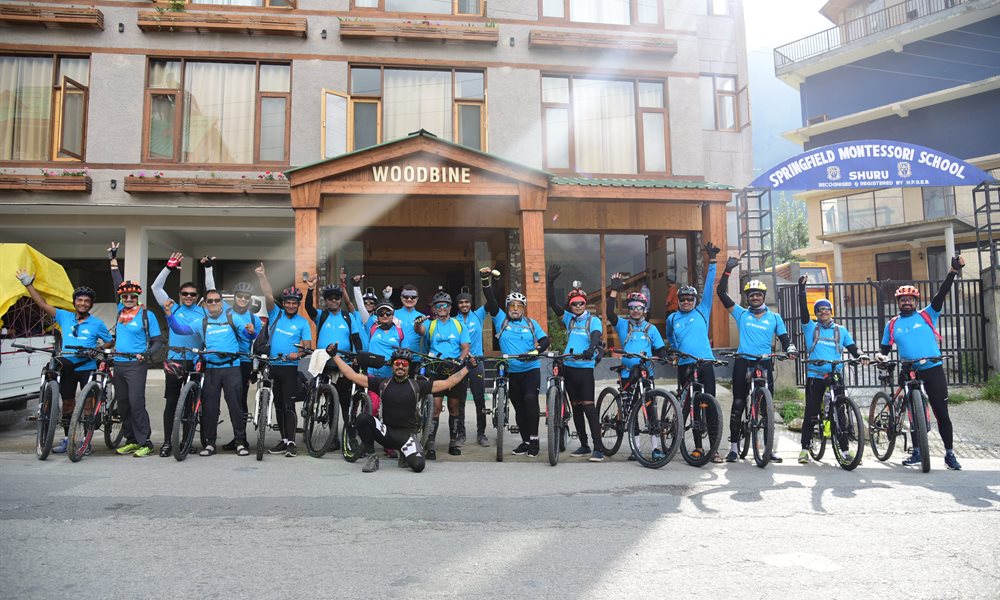 The first batch of this season left on 5 August which was lead by our Expedition Leader Geelani. The trek was successful and everyone completed the whole trek. Although, two people suffered the sign of AMS (Altitude Mountain Sickness) which was quickly diagnosed and treated by our trek leader who is course certified in first aid administration. The water stream on Pin Parvati trail had taken a scary appearance due to high water current. Our participants forded the stream well using the proper river crossing techniques. 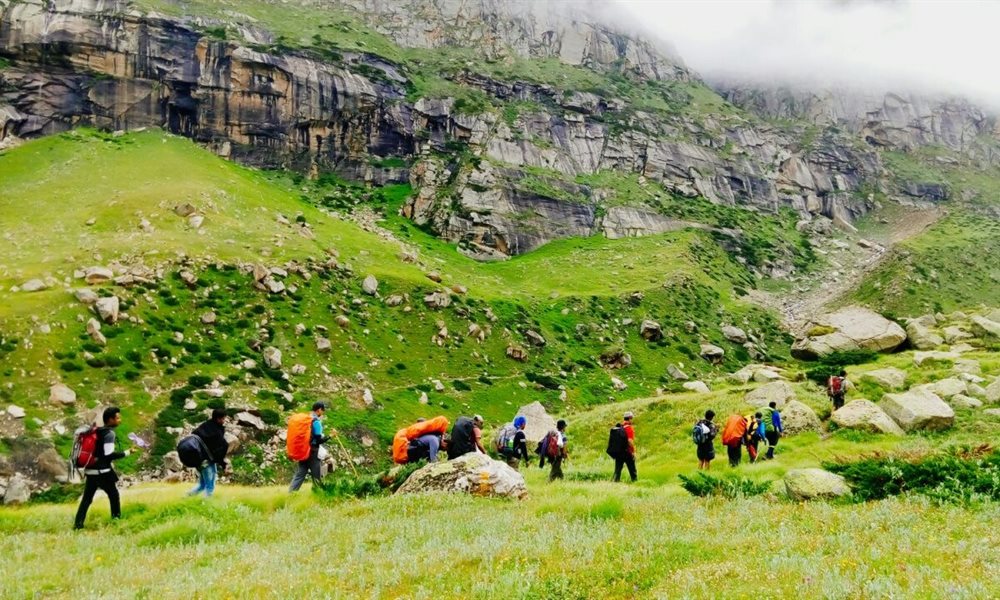 The second batch of Stok Kangri, that left recently, was led by our Trek Leader Manjit. From 12 participant, only one could make it to the top. The rest of the team members had to yield to AMS. Mountains are no place to take risks with your health condition. Nevertheless, we salute to their spirits and performance.

It is always sunny in Markha Valley. 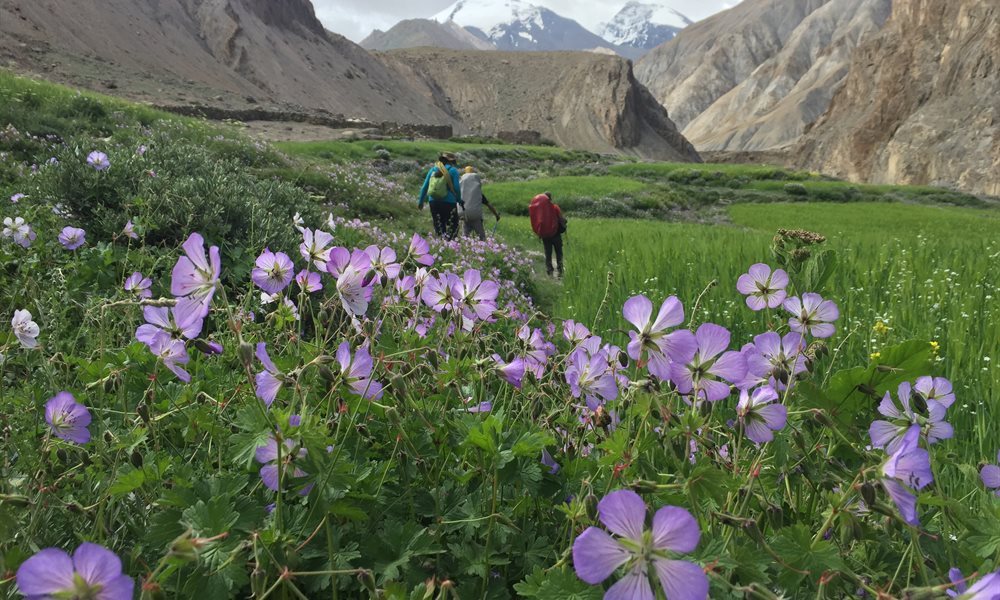 Beas Kund was beautiful beyond expectation. The whole trail was carpeted with flowers variegated colors. The batch was lucky to receive no showers in the day while they were hiking. However, it rained in the evening for both nights on the trek. The trek went well except in the end when one of the participants in 13 August batch fell into the river and injured herself. She was immediately taken care by the trek leader who administered her first aid on the spot. Singing National Anthem in unison surrounded by an amphitheater of peaks was the proud highlight. If you are planning to do this beautiful trek, now is the time! 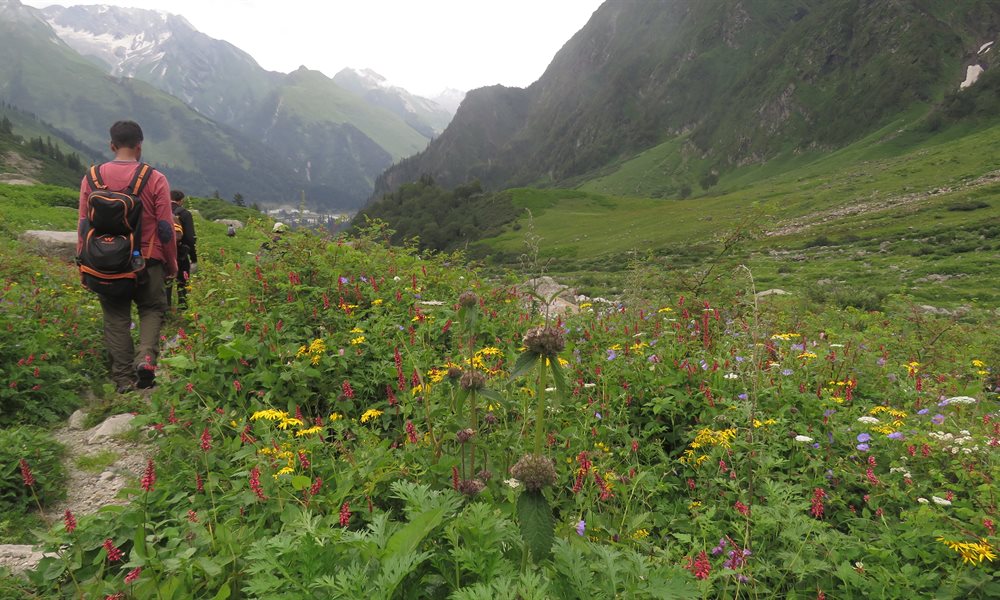 Hampta Pass lived up to its fame for being one of the most beautiful Himalayan treks. The participants in one of the long weekend batches had come all the way from Maitri Trekking Club at TCS, Kolkata. None of the participants asked for offloading their rucksack which makes us feel proud. There were rain showers on first two days and then sunny for the rest of the trek. Some participants could not go to Chandratal because vehicles were trapped on the route due to waterlogging. But some others could.

The batch was a first for us and our group reached Kaza on 13th Aug. The route from Manali to Kaza, which is anyways non-existent was even worse this time - crazy Nallas on the route, big round stones blocking the way, and huge amounts of dirt slushing the noses made it hard to breathe. As expected, the only challenge of this trek was altitude and so it turned out. With 2 participants falling for it at the Base Camp itself, it was only one member from the team who could make it to the summit! All of them might not have been able to complete the trek but the group showed a fabulous spirit. Harshit (or famously known as Musafir Harshit) was the last to give in to the mountain sickness but not before he reached the last shoulder and was forced to recede by the Trek Leader. His spirit to capture the moments during the trek was exceptional. He would be patiently capturing the nights & days, plants & animals when everyone else was simply gasping for each breath. We have reviewed the itinerary and soon be publishing the new one for this trek. 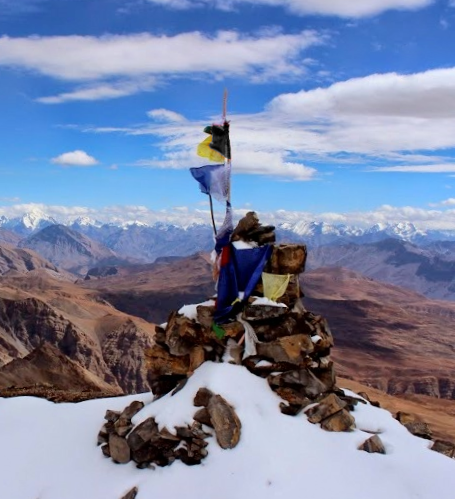 Bhrigu Lake received a big trekking crowd in the long weekend. The trail of Bhrigu Lake was lush with greenery. All our batches reached the lake and successfully completed the trek. The lake is now emerald in color, I hear from the participants. There were small showers of rain on the trek. The participants from 13 August batch celebrated the Independence Day in Rola Khuli. 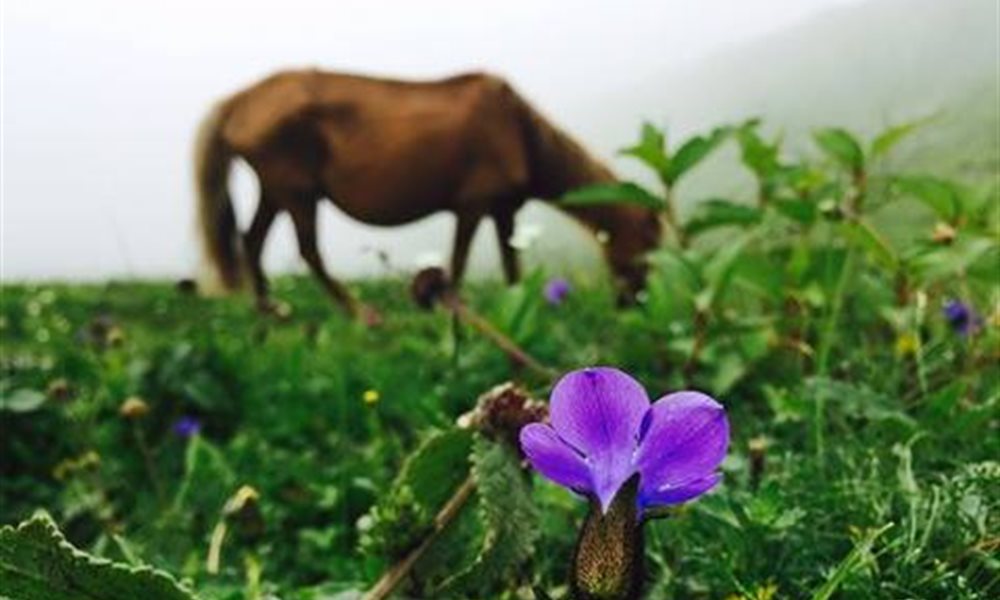 An engineer by profession and trekker by passion, Sonu Goyat is another of our Leader level members and just completed another 10 days on Pin Parvati Pass Trek with Jeelani. Playing true to her fame, she was almost an assistant trek leader to Jeelani this time. Jeelani caught up fever during the trek and Sonu took up the lead (purely as her own initiative). Since she has already attended all our learning modules, she not just helped Jeelani in managing the logistics but also played a great mentor to other participants - motivating, teaching & helping them through the trek. She has left very few unclaimed treks & tricks with Bikats. Bikat members like her keep us motivated and push us (Bikat) to move forward to bigger challenges.

More power to you, girl! 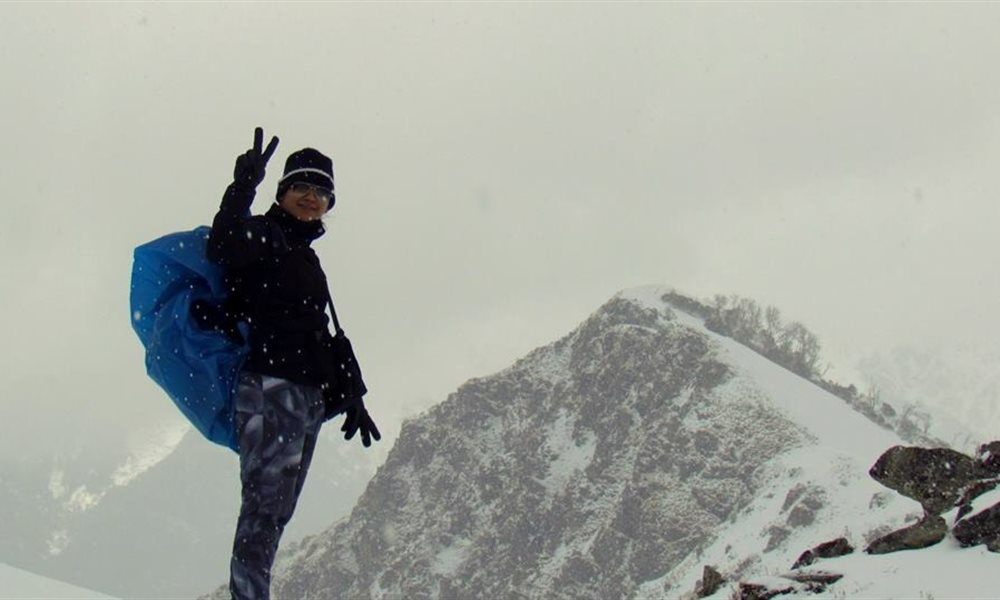 Going to Leh for your trek? Here is a little game for you.

Spot all these wildlife creatures that you will stumble across while trekking in Ladakh.

Share with us your number. The trekker with maximum spots wins. :D

Markha Valley is not an easy level trek and hence it is no pancake. The mountains always test you and so does Markha Valley Trek.

Stepping Stone for Serious trekkers, Stok Kangri will give experienced trekkers a close feel of an expedition.

For people who have signed up Manali-Leh Cycling expedition are in for legendary campsites on the way.

Also, if you ever get in a split what healthy snacks you should take on your trek, remember there are much more options than a bar of snickers. Read the blog to know.

Yesss! The much-awaited treks of the year are open for their run in the second season.

The first batch of mystery lake trek- Roopkund leaves on 02 September 2017. The Meadows- Ali & Bedni Bugyal will be flourishing with greens at this time of the year. Get the crystal clear views of peaks like Kedarnath, Chaukhamba, Neelkanth, Trishul & Nanda Ghunti on the trail. 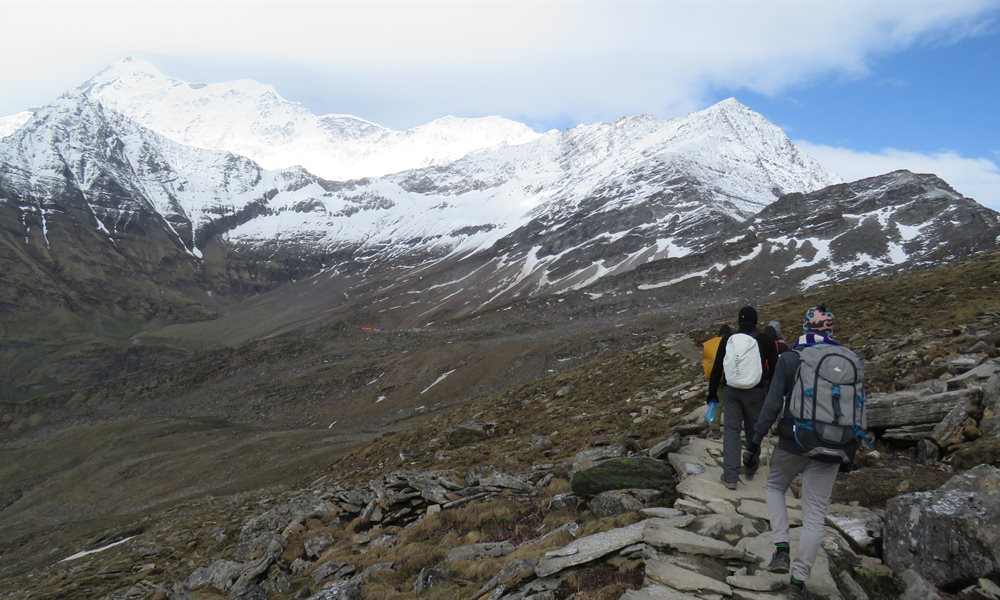 Running second in the leagues is Rupin Pass where you will get to see the dramatic change in the scenery. The waterfall, the hanging Jhaka village, and the ancient Lord Shiva Temple are some of the features of this oh-so-awesome trek. The first batch leaves on 09 September 2017.

Bali Pass is a virgin trek in the land of the Himalayas and a great option for the experienced trekkers. The trail for the difficult level trek offers the walk through pine forests of Govind Pashu National park, the beautiful meadows of Debshu Bugyal, the picturesque campsite at Rainbasera, the alpine lake of Ruinsara and much more. 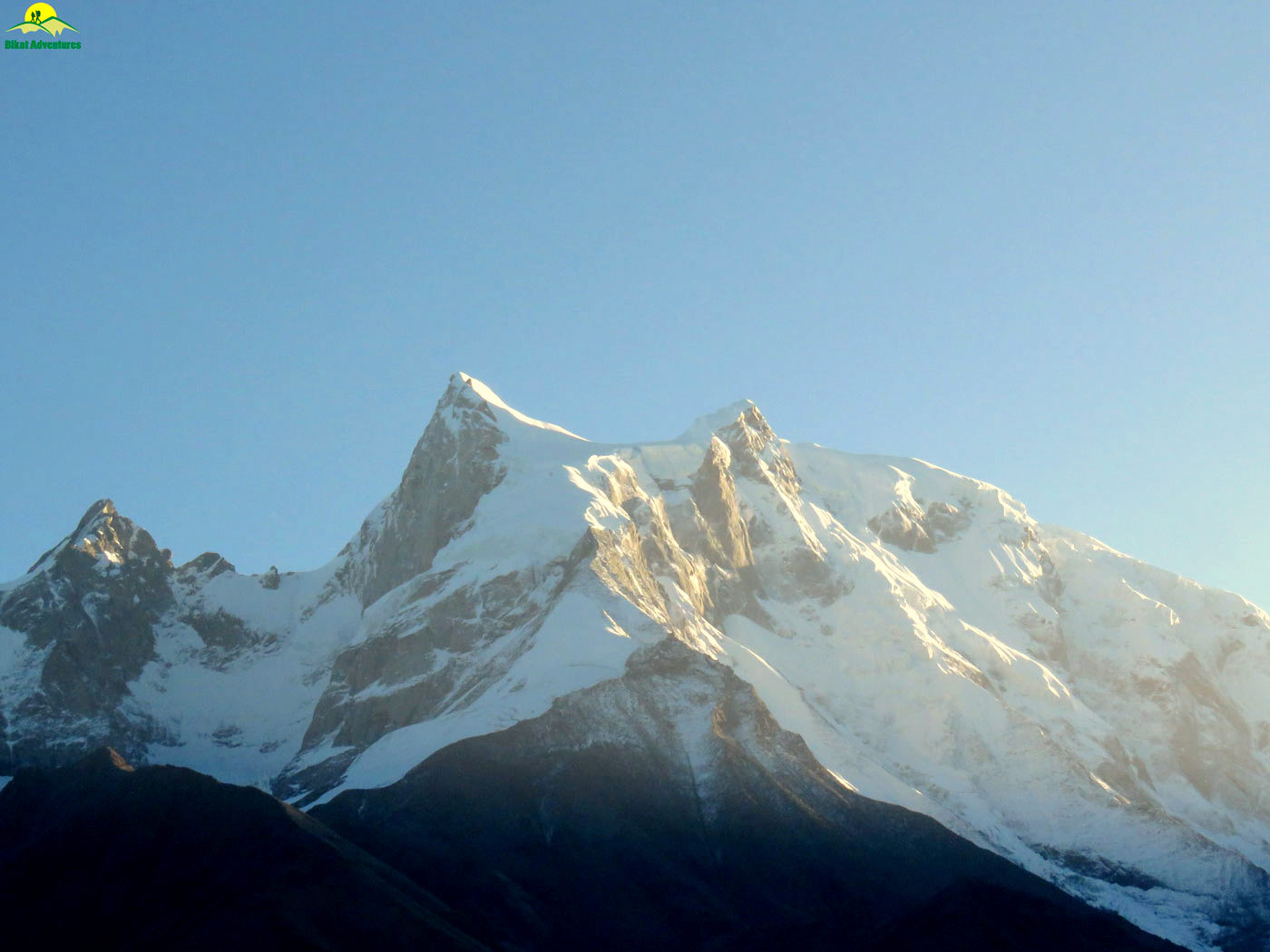 There is still time to explore the wilderness in the Leh region till the region is closed after September due to the onset of winters.

Get to see another world up in the North India on your trek to Markha Valley. The epitome of remoteness, this trek is your gateway to Ladakhi Culture. It is the only trek to have two Mountain Passes - Ganda la and Kongmaru La.

For more experienced trekkers, there is Stok Kangri Summit to give them a teaser of an expedition. A trek from the challenging grade, Stok Kangri should not be taken as child’s play. Many good trekkers get succumbed to AMS on the top. Make sure you are fit for the challenge. These exhilarating photos from the Stok Kangri Trek will get you all stoked for the adventure.

Trekking in Sikkim is altogether a different experience than trekking in Northern Himalayas. Goecha La offers you the ultimate opportunity of trekking in such a wonderful place that Sikkim is. Get the scintillating views of Mt. Kanchenjunga from the top at the height of 4,940 meters. 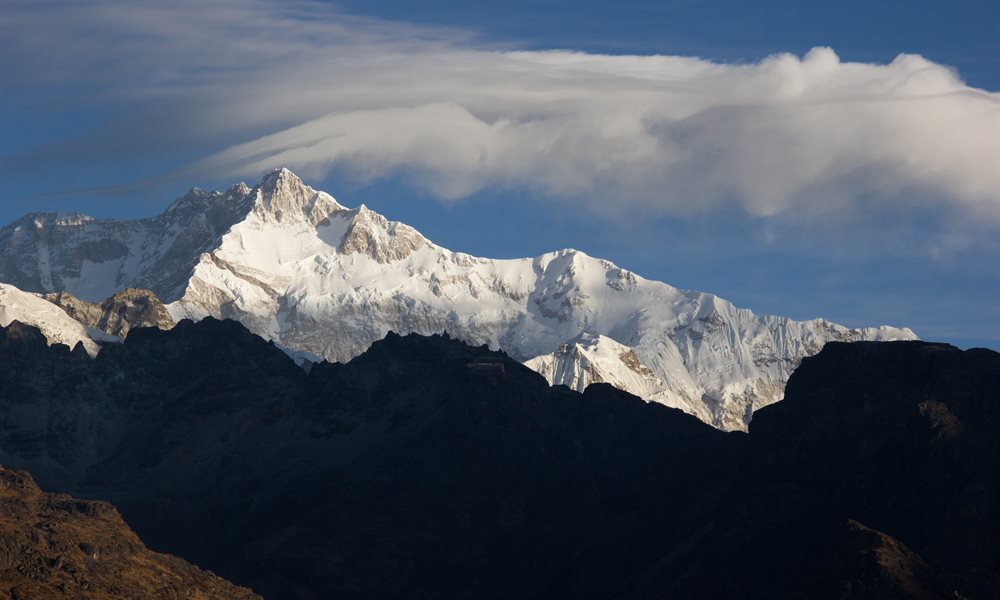 With the charm of Hampta Pass, Bhrigu Lake, Beas Kund increasing every day, enjoy the of adventure and wilderness till the month of October before the winter comes.

Book your batches till the season of these treks lasts. 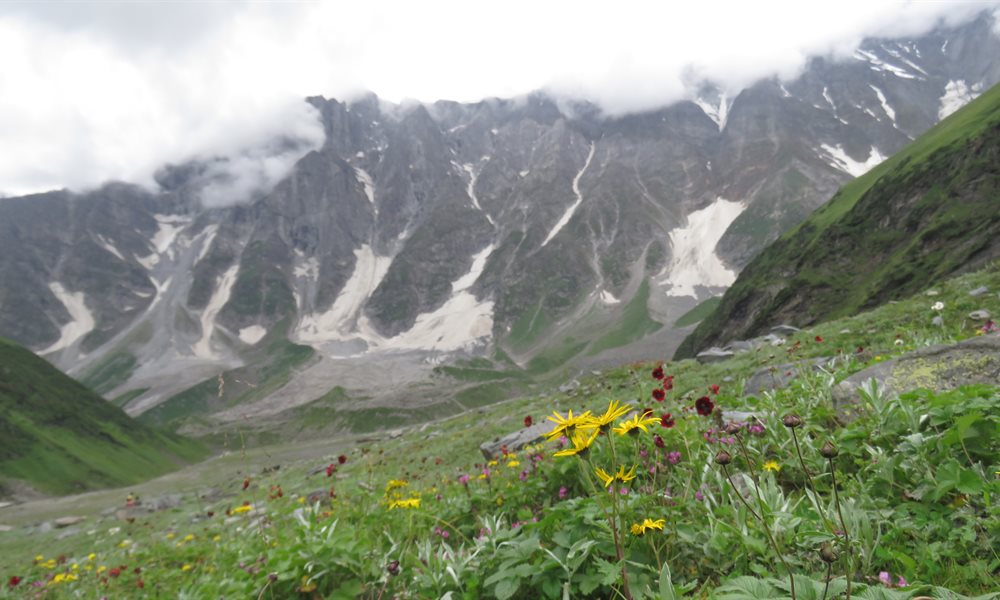 Get your best pictures from the wild ready because our September Photo Contest is live!

The dates and the rules for the contest are out. Click Here to participate

Here are the winners from last Photo Contest.

Spiti region saw another feat of La Darcha festival which has become an annual affair for the whole region to celebrate the innate culture of Spiti. The local MLA inaugurated the event and promised many new bridges, road sections, and Airtel network to the people who are facing a big issue of Road & Telecom connectivity 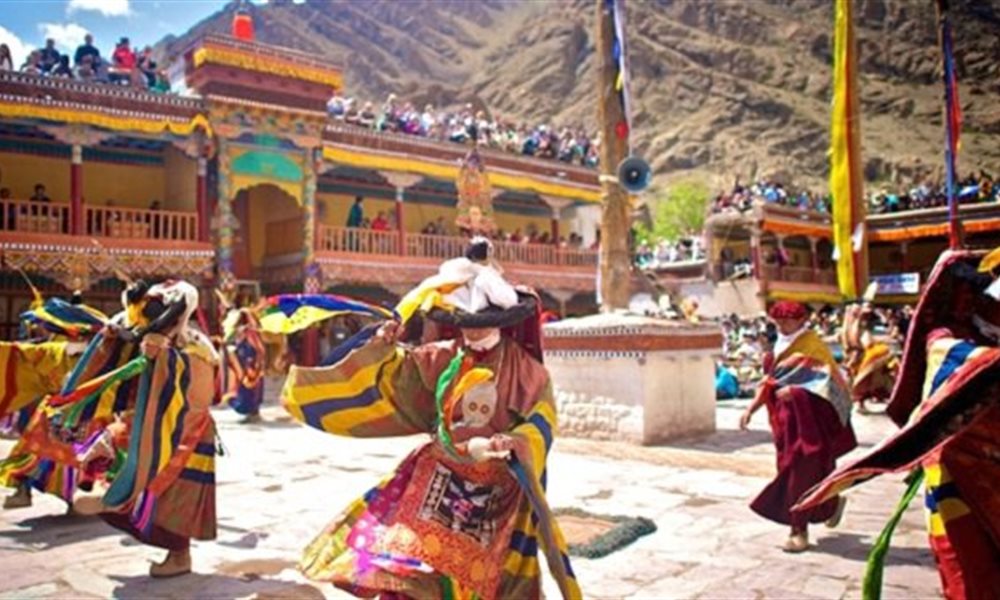