Brave survival of 7 students on the Chandrakhani Pass

Before the panic begins and trekking gets termed as “extremely dangerous”, let’s try to see what exactly happened at the Chandrakhani pass between 11th and 14th March 2016. 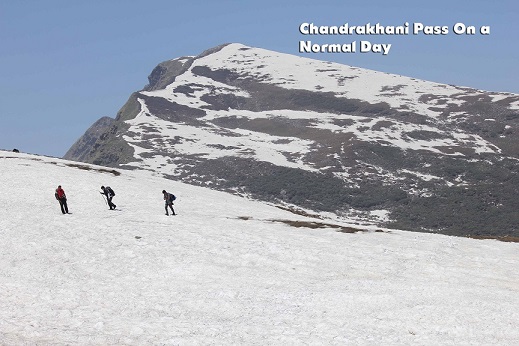 A bunch of students (7) from a technology institute in Punjab started trekking with a local friend (from Kullu) to the religious shrine of Bijli Mahadev. It’s still getting contemplated whether they moved from Bijli Mahadev towards Chandrakhani Pass knowingly or by mistake but at least one of them has commented on record, saying that they started moving towards Chandrakhani Pass after reaching Bijli Mahadev. The team was trekking alpine style where they were carrying tents, sleeping bags, and food on their own and were not supported by any set of porters or mules for carrying such things. A little while after starting the trek towards Chandrakhani, they were trapped in severe snowfall that had emerged due to the western disturbances hitting Himalayas (a little later in the season than normal). Due to a complete whiteout, they lost their way and could neither move forward nor trace their route backward. Fortunately, they could call and inform about their situation with a rough idea of their location. They had already attained an altitude of around 11,000 ft and were some distance ahead of the base of Chandrakhani Pass (11975 ft). While they were waiting for the help to arrive, they pitched tents and used the sleeping bags to survive for more than 70 hours after getting lost. They did try to find better sites for themselves and found some caves nearby. Finally after many attempts from the rescue teams comprising of people from ITBP, ABVIMAS, and local police, the group was finally rescued in two parts using a chopper. First 6 people were rescued on 13th March night & others were rescued on 14th morning.

So, what does the story tell us? Should it create panic? or some caution?

Well, I think some caution and learning must be drawn from every incident but there is nothing to really panic about. Trekking is definetely safer than other extreme adventure activities, drive on the highways, and much safer than driving two-wheelers!

However, as I said, some learning must be drawn from this incident as well. I am trying here to highlight some important aspects of this incident:

Overall, one can say that these guys made some mistake but is that the real issue? To me, the real issue is lack of information in the public domain, especially about alpine style trekking. Alpine style trekking needs to be recognized more and simple set of guidelines must be issued in the public sphere along with permission structures for obtaining supporting tools like weather forecasts, maps, satellite phones on rent, etc. Also, local authorities should establish clear procedures of registration for all such trekking plans in convenient ways, including online forms.

Source: Interviews with local inhabitants of Rumsu village (Kullu) and Published news articles on the internet.

The opinions expressed in this article are the author's own and do not reflect the view of the Bikat Adventures Pvt Ltd.

A nature lover, "argumentative" person, I work as a Partner at Bikat Adventures and love to explore. Have Led many trekking expeditions including the Roopkund, Mantalai, Dayara Bugyal, Dharwa top, Har ki Dun, and many others. Been saddling (on my Raleigh bike) for some time now and have claimed Manali Leh Expeditions twice, once unsupported and once as a lead cyclist amongst many other expeditions. Being a certified mountaineer, I feel at home in the Himalayas. These days, I am itching for a challenging expedition... Lets see what comes my way.. 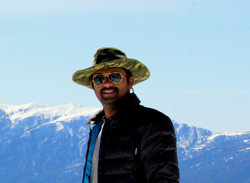