The mighty Himalayas have been for a long time hiding a treasure so epic and grand that only a true adventurer in search of an immaculate place could appreciate.

Are you wondering what this hidden gem could be and where it is possibly located?

Welcome the alluring Dev Kyara, tucked between the Rupin and Supin Valleys of Uttarakhand.

You must be thinking why haven’t I heard of this trail before? It is understandable since this trek is one of Uttarakhand’s best-kept secrets.

At an altitude of 4100M, Dev Kyara is a high altitude meadow situated at the lap of Ranglana Peak. This massive meadow is surrounded by captivating mountains with the Dibra Gad River meandering next to it. The Dev Kyara Trek is unquestionably the best valley trek in Uttarakhand.

Known only to the locals, the Dev Kyara trek is an extremely offbeat trail that lets you explore the best of Govind Pashu National Park in the famous Sankri region of Uttarakhand.

After having explored this beauty, we can proudly say that the Dev Kyara Trek has a unique glory associated with it in terms of thick forests, massive meadows, countless waterfalls, boulders and streams, and mighty snowcapped peaks and passes.

We have penned the highlights of Dev Kyara Trek which tells why this is one of the best treks for you to consider.

The Dev Kyara meadow is located in the Govind Pashu Vihar National Park in the Sankri range of Uttarakhand. While the hamlet of Sankri attracts trekkers from all corners of the world every year for its range of popular treks such as Kedarkantha, Har ki Dun and Bali Pass; but people are unaware of the fact that there are a total of 35 treks which start from Sankri. 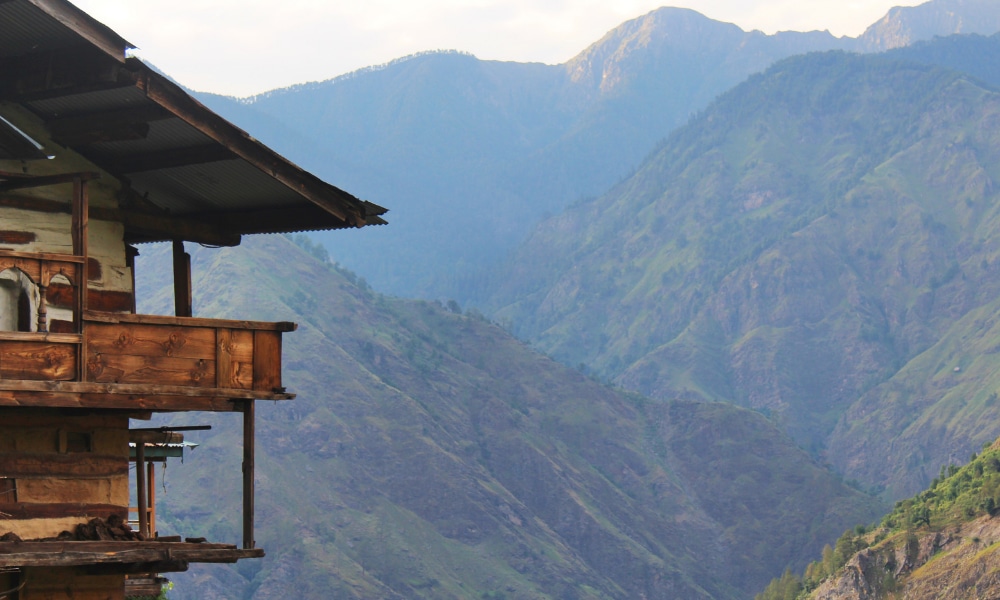 The beautiful hamlet of Sankri

The Devkyara Trek is a lesser-known trek from Sankri but one of the most beautiful treks Uttarakhand has to offer, undeniably.  The trek itself starts from Boincha which is located about 2 hours from Sankri. This scenic drive to Boincha takes you through winding roads with postcard villages and terraced farms adding to its charm. 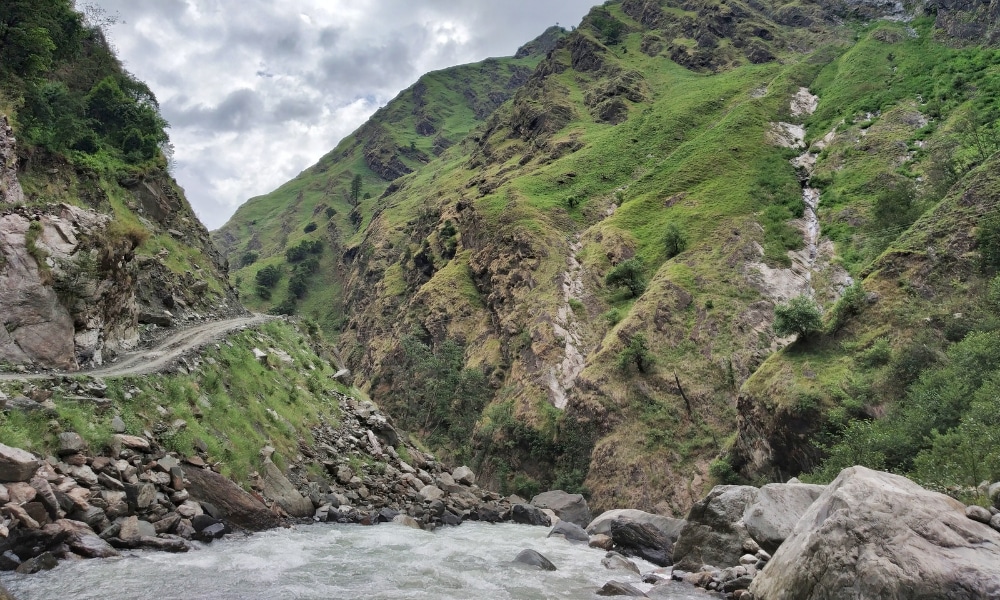 Scenic drive to Boincha from Sankri

Sankri, at a distance of 210 km from Dehradun, can be reached by local buses and shared taxis thus providing trekkers with a convenient mode of transport.

2. The Trail – Dynamic and Utterly Exotic

The Devkyara Trek is tailor-made to fulfill your trekking desires and certainly does not disappoint. With ever-changing landscape perfectly allocated to sweep you off your feet, the relatively easy 36 km trail is meant for both beginners and experienced trekkers. 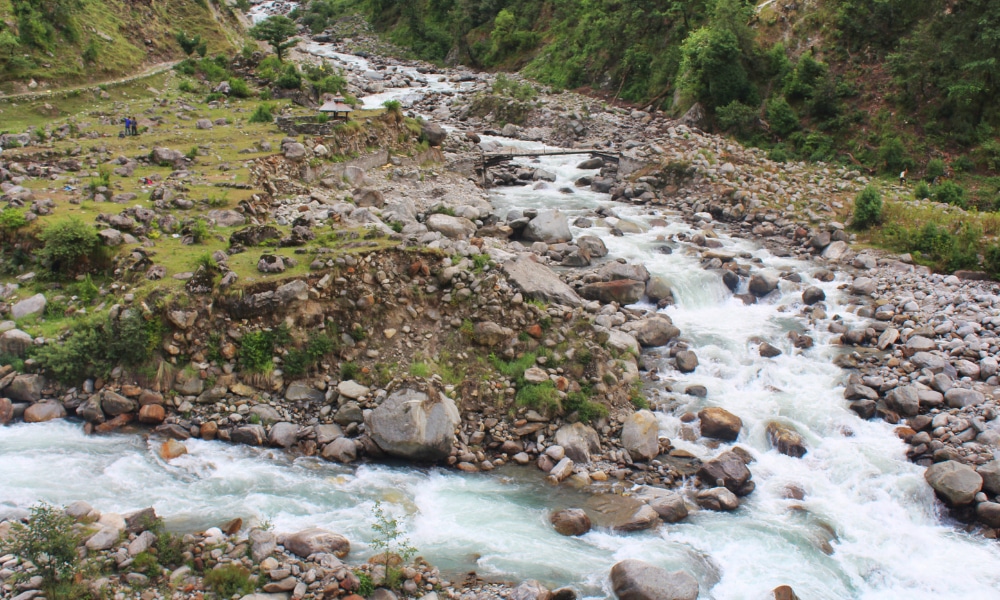 The Supin and Dibra river converging at Boincha. The trail to Dev Kyara is to the right, alongside the Dibra Gad river.

The trail takes you along the Dibra Gad River, a tributary of Supin River, from start to finish. One day you find yourself walking through a forest studded with pine and maple trees and the next day you realize you have entered massive meadows with glades of grass brushing your feet. Then suddenly the valley opens up allowing to enter a completely different world where you will have to make your way across boulders and numerous stream crossings while snowcapped peaks reveal themselves bit-by-bit making you crave for more. 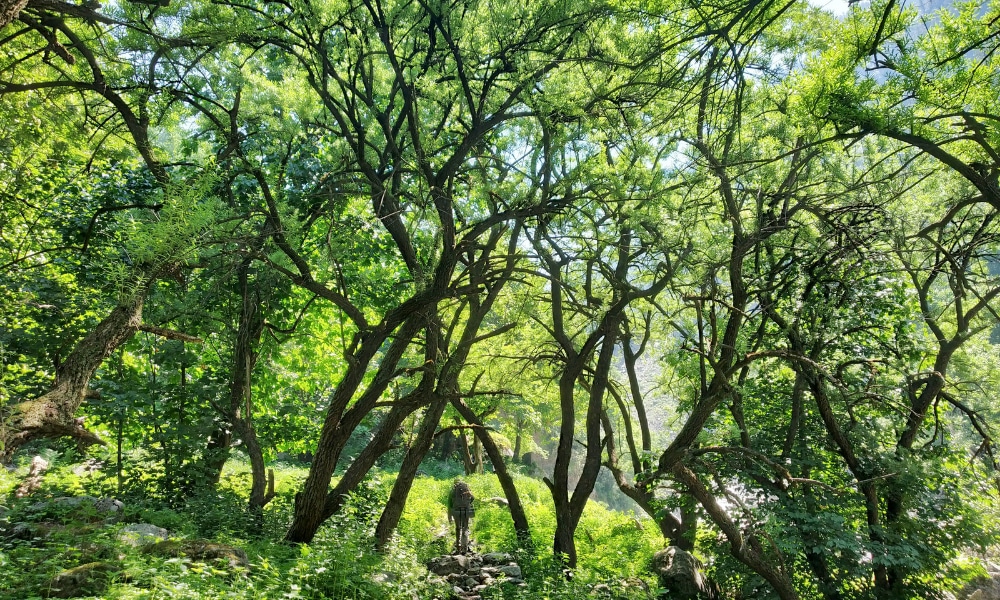 By the time you register everything that is around you, the landscape changes yet again. But this time you find yourself standing on a snowfield staring at unnamed peaks and passes at a distance that is yet to be explored. Eventually reaching a herculean meadow that is Devkyara, almost 6 km wide, surrounded by epic mountain peaks. 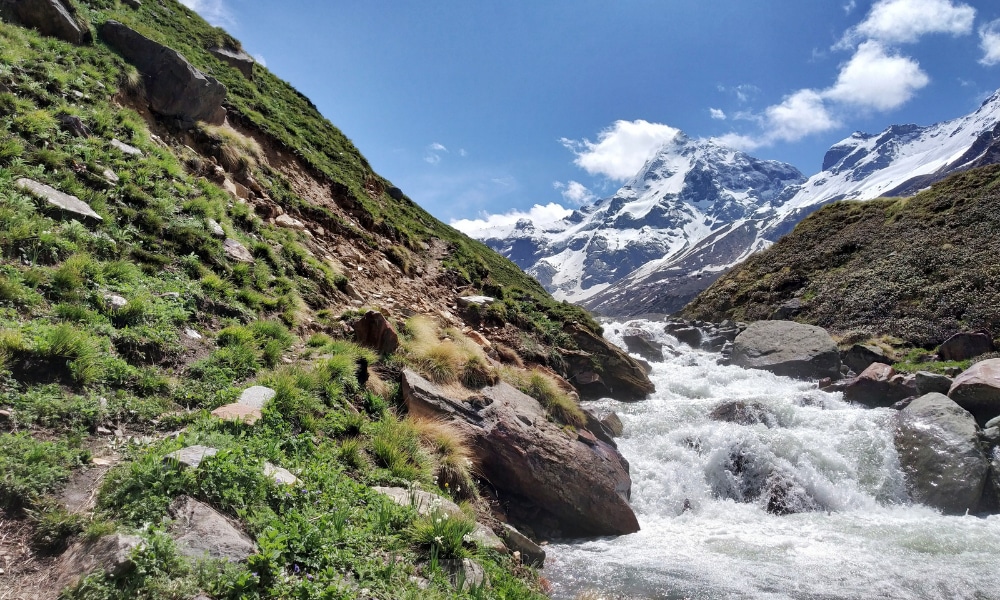 Takes time to comprehend the beauty of everything that you have seen in just a span of 3 days doesn’t it? 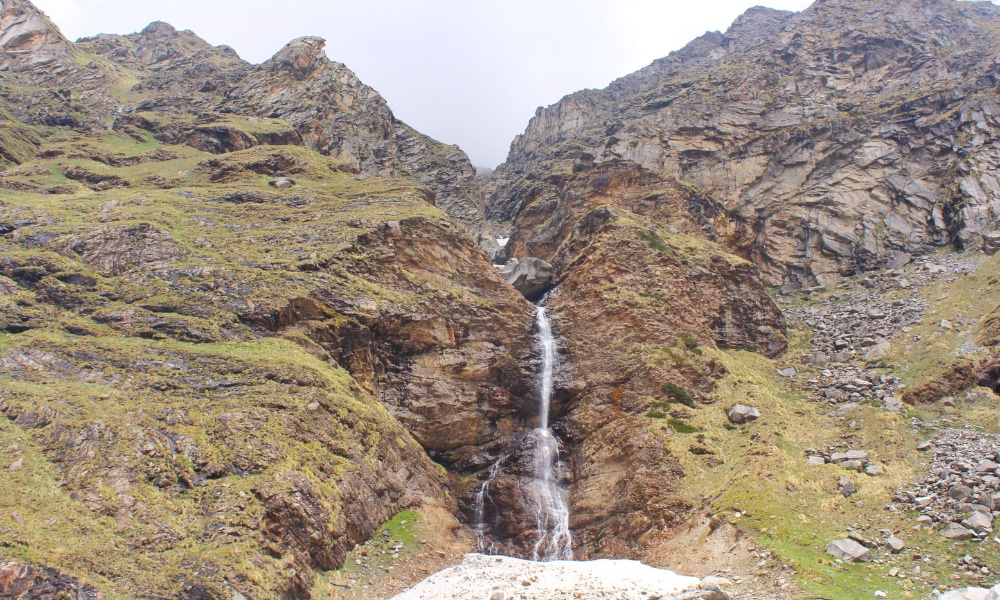 Countless waterfalls on the trek will keep you engrossed

The most spectacular aspect of this trek is the countless waterfalls that present themselves gracefully all along the trail one after the other, at different heights with unique features.

The Devkyara trek has nothing short of amazing campsites, so vast you can spend an entire day just exploring the campsites. With soothing views of waterfalls, winding streams and rivers, towering mountains, and mystical clouds hovering over the campsite, you will be left in awe. 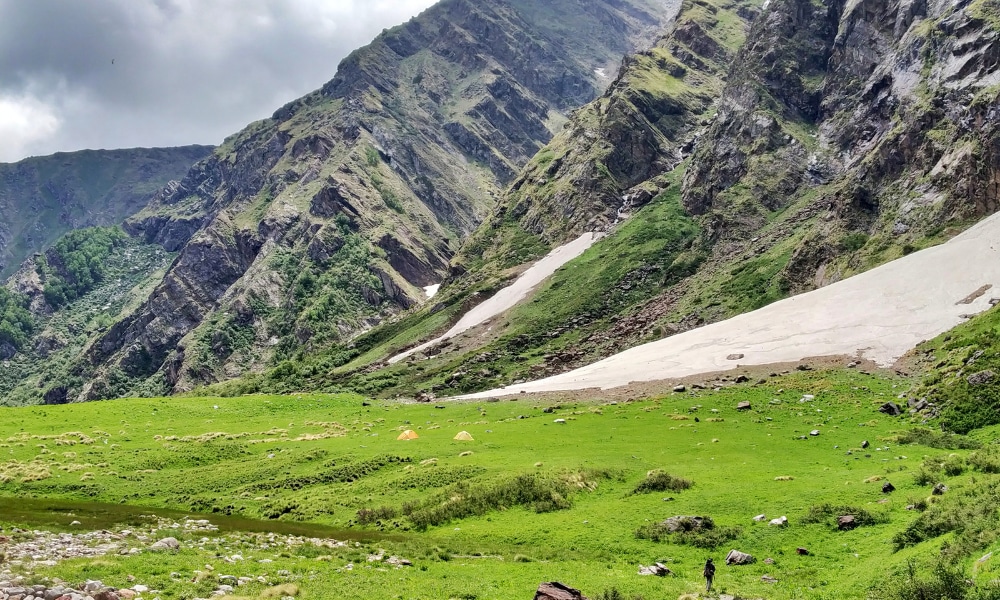 Exquisite campsite of Bhawa, the vastness of which is jaw-dropping

From the forest laden campsite of Obra Gad with a temple of a local deity, the colossal campsite of Bhawa with a waterfall behind you, the Dibra Gad river ahead of you, first glimpse of the Ranglana peak to the left and a cascade of grassland to your right, to the massive campsite of Devkyara at the foot of the Ranglana Peak; the campsites of Devkyara Trek are presented to you on a platter of awesomeness. 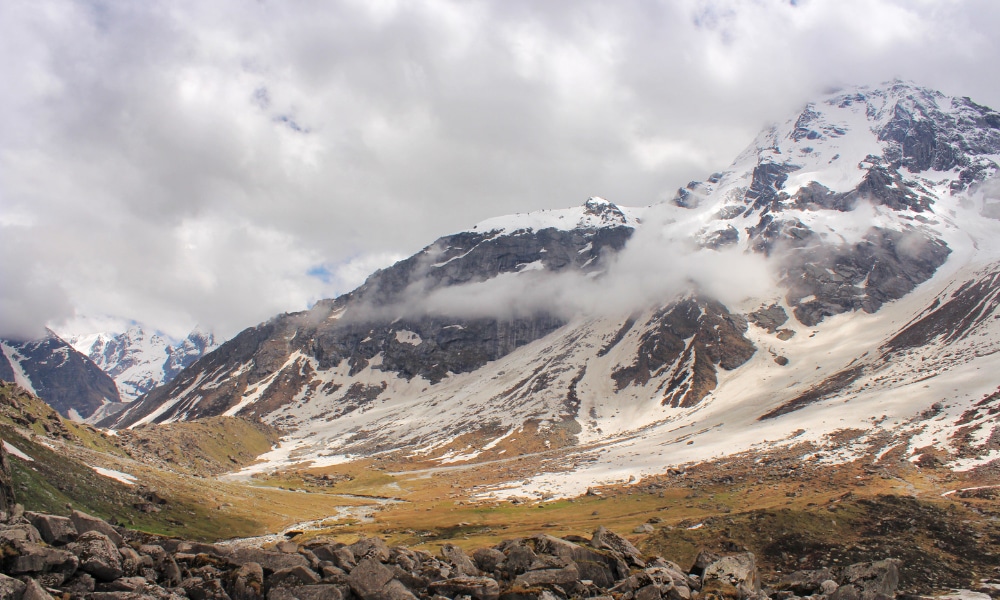 Scenic Dev Kyara campsite at the foot of Ranglana Peak 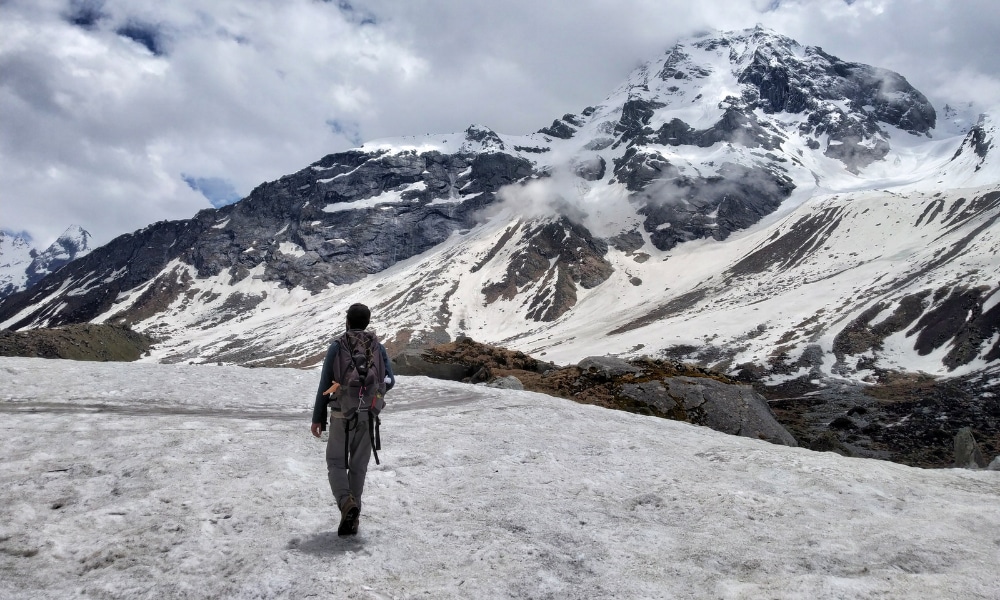 The Dev Kyara Trek offers the perfect settings to a photographer

4. An Amphitheater of Peaks and Passes 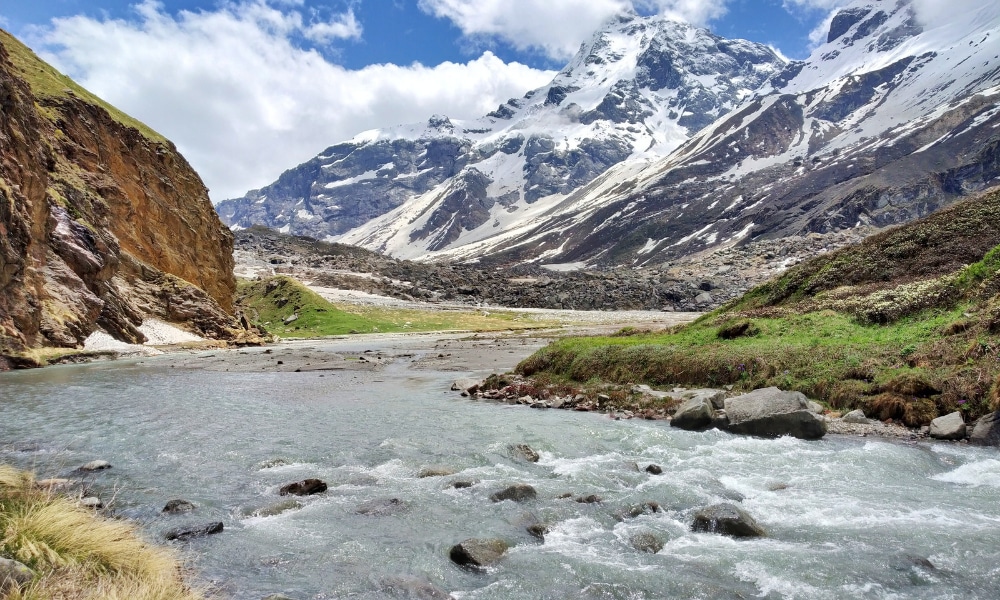 The mesmerizing beauty of the trail leaves you awe-struck

With the trail of Devkyara lying parallel to the popular Har ki Dun trail, there is no shortage of unparalleled views of snow-capped mountains and passes during the trek. The campsites and the trail have imposing mountains on either side making it a bit overwhelming yet spectacular. 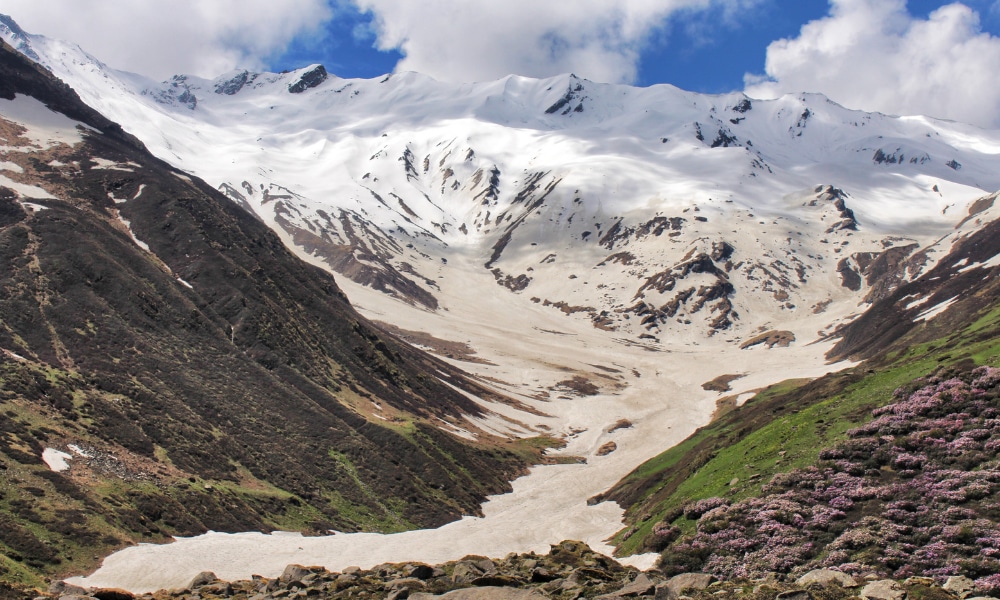 Spectacular views of unnamed passes from the trail

Notable peaks such as Hata Peak in the Har ki Dun Valley and the Ranglana Peak overlooking the Devkyara campsite are the show stoppers. One can see the mighty Khimloga Pass, which crosses over to Chitkul in Himachal Pradesh, from the Devkyara Campsite. However, the trek gives you unmatched views of several unnamed peaks and passes which shows how relatively unexplored this region is. 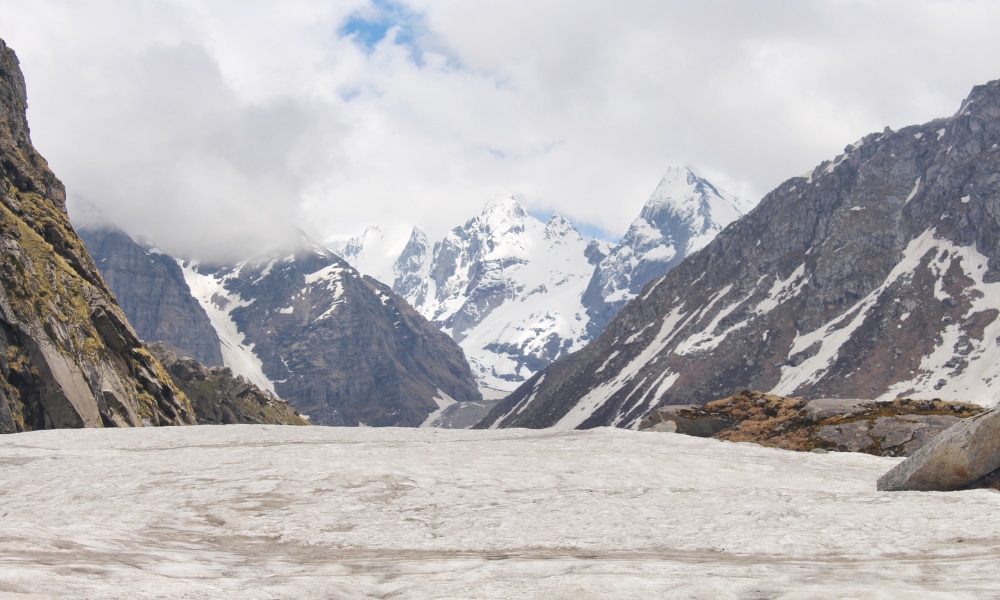 The Devkyara Trek is graded easy, thus perfect for novice trekkers and families as well. With a gradual ascent and descent, lack of challenging sections, no summit and glacier traversing, the trail poses very less difficulty. With a relatively short trekking distance of 36 km and an overall trek duration of 5 days taking you to a maximum altitude of 4100 M, the Devkyara Trek has a lot to offer in such a short time. The trail being less challenging allows trekkers to experience the fullest grandeur of this one of a kind trek for all avid trekkers. 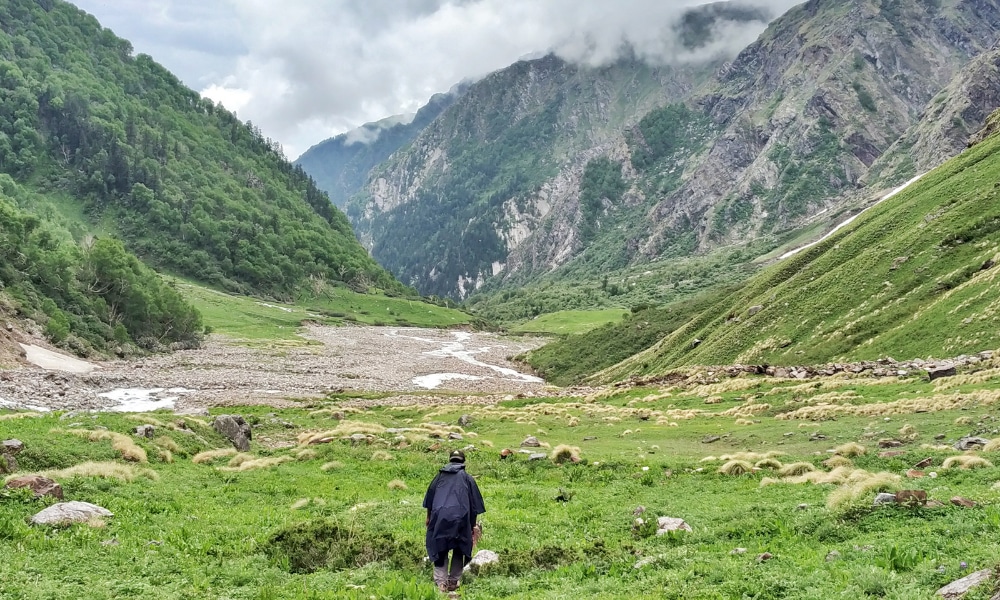 An easy trail alongside the meandering river and luxuriant grasslands

However, it is always recommended to be physically fit to successfully traverse the winding trails, cross over boulders and snowfields during the trek. 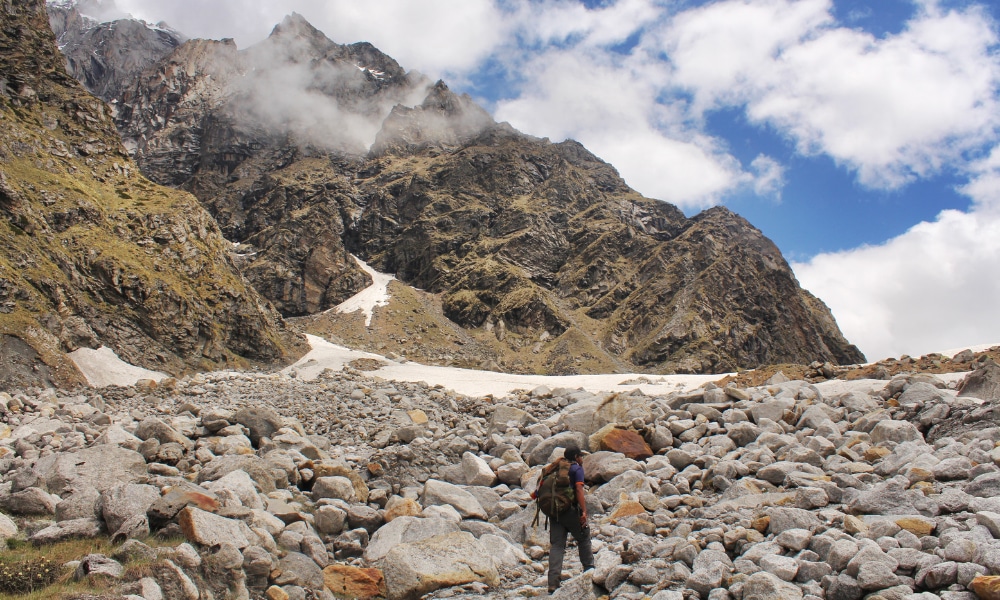 6. Camp at the Base of Ranglana Peak 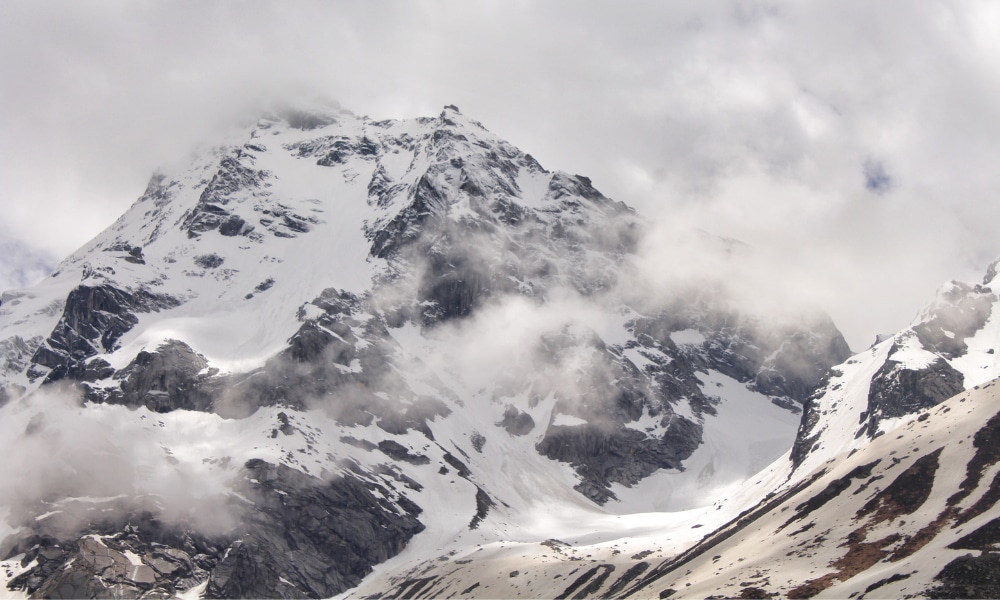 The campsite of Dev Kyara is located at the foot of the beautiful Ranglana Peak (5554 M). The unique experience of this trek is the fact that you get to pitch tents at the foot of the Ranglana Peak which is otherwise known as an alpine campsite. Camping at Dev Kyara in no way feels like you are in a valley, in fact, it is at the base of the Ranglana peak with the meandering Dibra Gad river kissing the campsite as it flows ever so roaringly yet gracefully. Such a campsite is usually seen in mountaineering expeditions. Thus, the trekkers will have the outright delight to enjoy the campsite surrounded by mighty peaks and passes that stretch miles long. 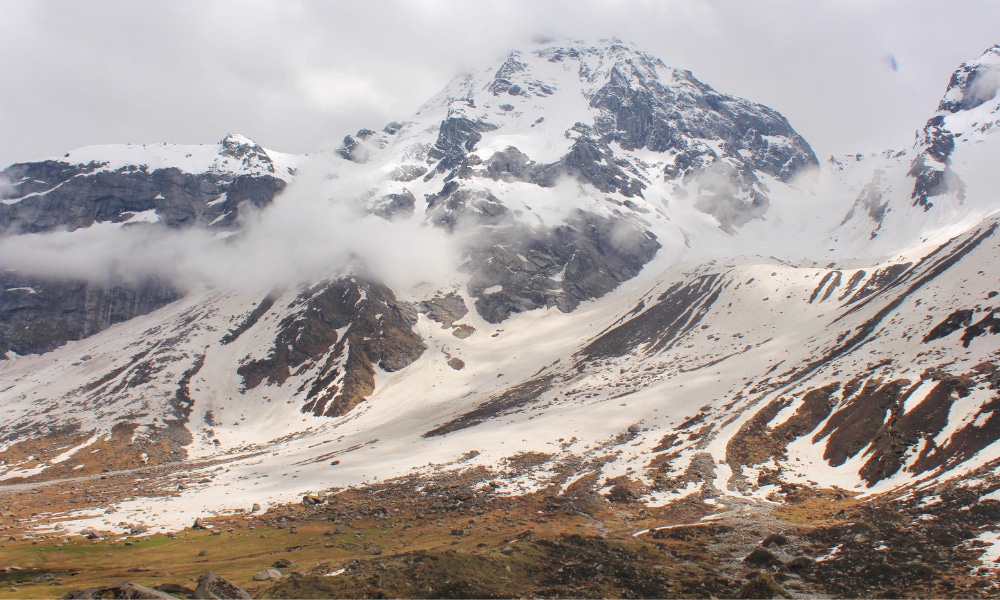 Now that you know what the Dev Kyara Trek has to offer, time to deviate from the usual norms of undertaking popular and crowded treks such as Har ki Dun and opt for the pristine Dev Kyara Trek to experience what pure, untainted and raw Himalayan Treks feel like.

In a span of 5 days, you get to witness a transition from forests, meadows, grasslands, boulders, streams, waterfalls, expansive valleys to mountain peaks while being accompanied by a roaring river. What more do you want from you first ever Himalayan trek?

The Devkyara Trek is indeed a gallery of Waterfalls, Rivers, Meadows, and Peaks. And, the only thing missing in this picture is You.

So, take the path less traveled and explore the Devkyara Trek to see a world which has been kept hidden from you for so long, far too long, and complete the picture.