10 Best Treks To Do in Uttarakhand

Uttarakhand is called the “abode of the Gods” for good reasons.

The Indian state situated west of Nepal is considered to be the epicenter of the great Himalayas. A holy land and a frequent pilgrimage spot for the Hindus, the state is home to the magnificent Gangotri Glacier, the source point of the Ganges River. The state is also home to the second tallest mountain in India – the Nanda Devi which stands 25,643 feet tall. Needless to say, there’s an abundance of trekking routes in Uttarakhand.

Here let's look at the 10 Best Treks in Uttarakhand:

Located in the Gangotri area of the Garhwal Himalayas, this trek in Uttarakhand is ideal for mountain aficionados as it offers remarkable views of the Great Himalayan ranges such as the Jogin peaks, the Bhirgupanth peak and the Thalayasagar peak. This high altitude glacial lake is the hidden gem of Uttarakhand. Amongst the snow-shielded peaks and landscape, the explorers can also get a sight of several mountain wildlife species such as the Blue Sheep, Goral, and the famous Himalayan Black Bear on Kedartal Trek. 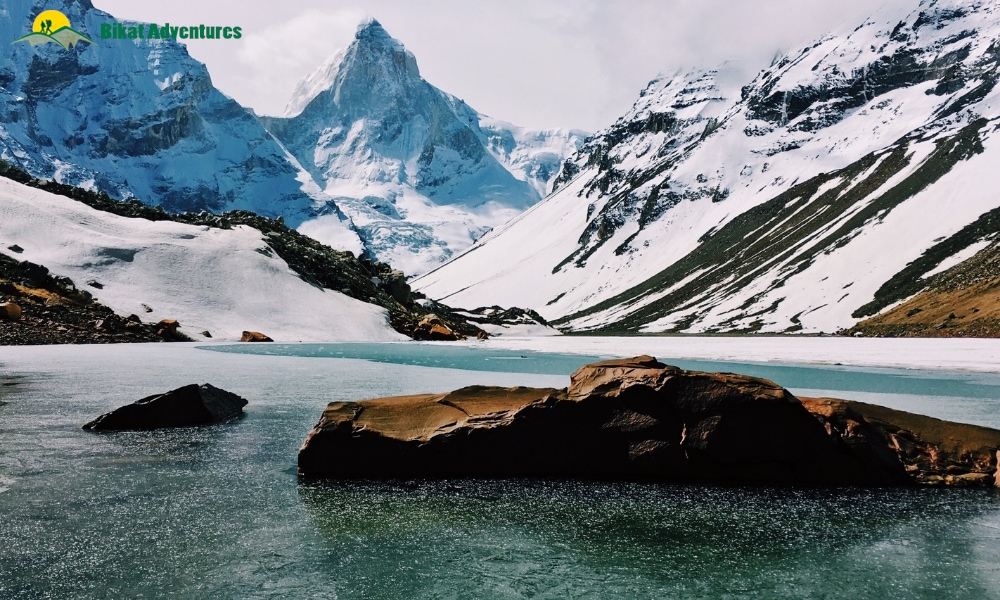 Lofty waterfalls, illusory views of neighboring peaks, and exotic flower-laden pastures guarantee that Rupin Pass is unforgettable. The trek starts from the minute township of Dhaula and over the course of 7 days, trekkers have to climb almost 10,000 feet to get to Rupin Pass, thus crossing over from Uttarakhand to Himachal. On the way, there are several beautiful villages such as Jakha that serve as ideal resting stops. 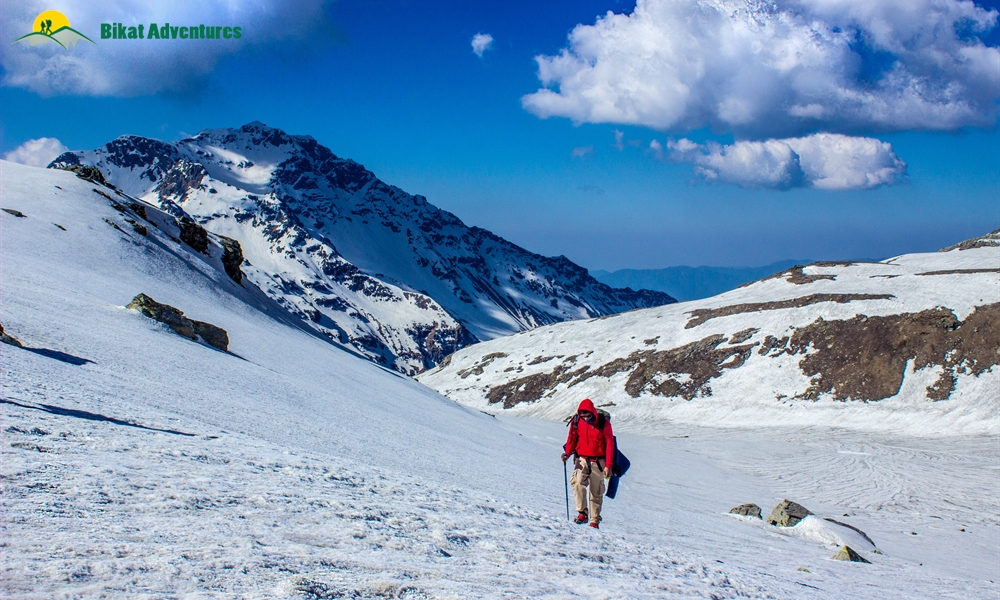 The thought of covering over 18 km in just 4-5 days, gaining an altitude of over 6000 feet may seem harsh but the stunning 360-degree views of various celebrated mountain peaks in Kedarkantha certainly makes it worth the while. Start from the village Sankri in Uttarakhand and by the time you reach the Kedarkantha peak, you will feel as if you’ve touched the sky! 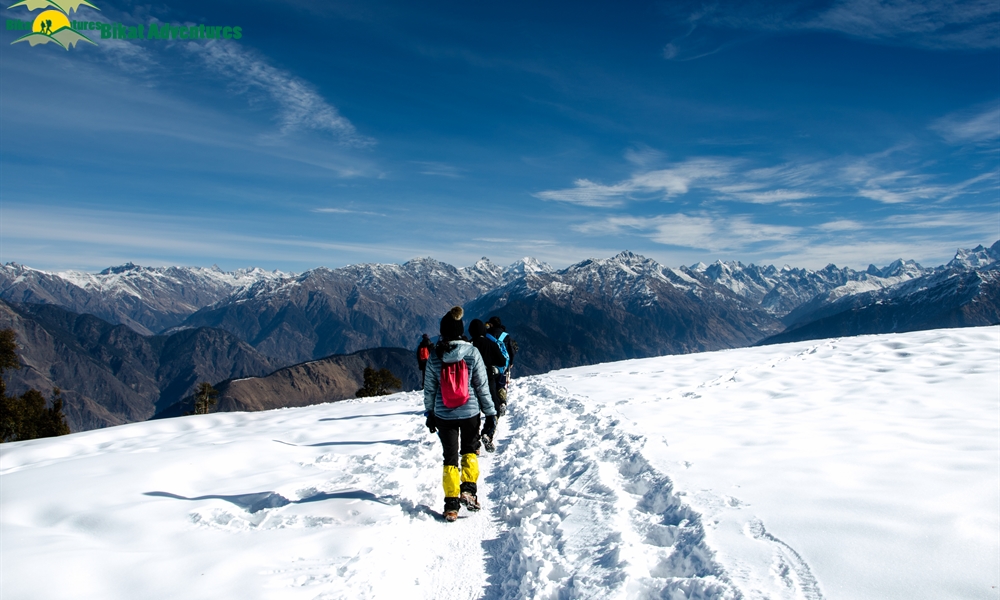 The Bali Pass Trek is meant for seasoned trekkers only due to its challenging terrain. This trek route falls inside the famous Govind Wildlife Sanctuary so expect to see a lot of exotic flora and fauna. As you walk across the beautiful rivers of Tons and Siyan Gad through conifer woodlands, eventually reaching the magical lake of Ruinsara Tal, you are gifted with unparalleled views of Bandarpoonch, Kalanag, and Swargarohini Peaks. 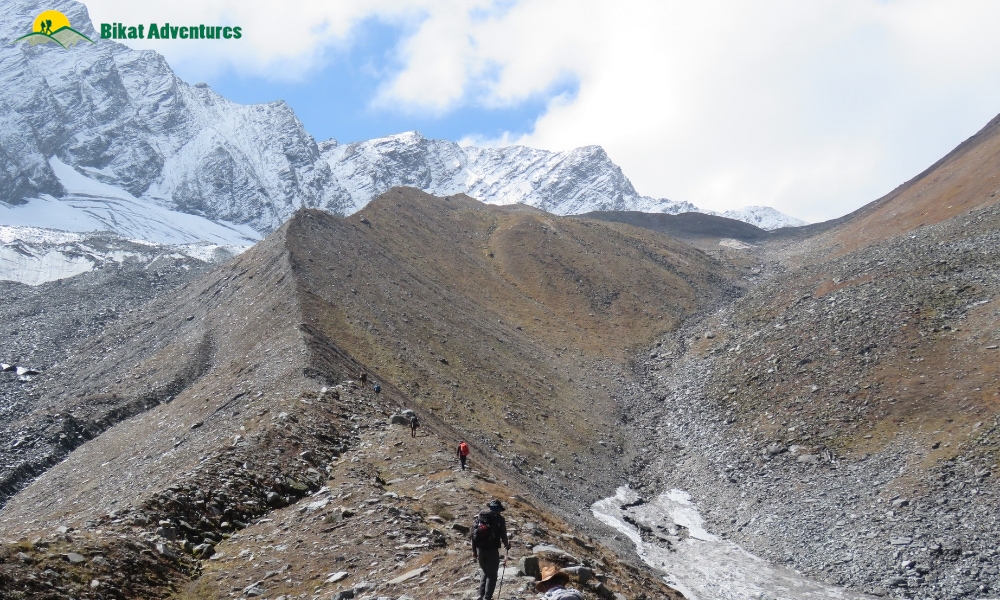 Auden’s Col is one of the hardest trek routes in Uttarakhand. The trek commences from Gangotri. As you trek towards Nala Camp, you’ll come across pine and cane woodlands. From Nala Camp, the route will take you to the Rudra Gaira Base Camp – an ideal place to catch extraordinary glimpses of snow-laden Himalayan peaks. Connecting the peaks of Jogin I and Gangotri III and also the glaciers of Khatling and Jogin I, this trek takes you through endless glaciers, moraines, narrow cliffs, and snow ridges, thus demanding extremely high fitness. 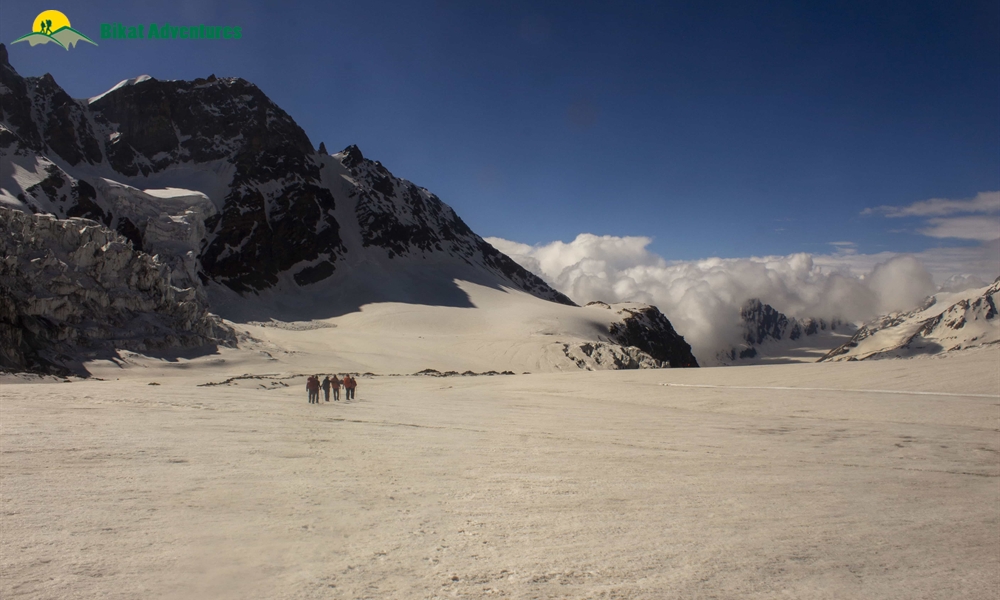 This is one of the easiest to accomplish treks in the Garhwal region of the Himalayas.

During Har Ki Dun trek, explorers will get to witness the beautiful Tons River valley that is encircled by the highlands and dense woodlands. The pre-Monsoon spring months are ideal for bird watchers and the post-monsoon season is recommended for flora lovers as they blossom in these months. The trail has enough snow in the months of December and April, making it perfect for snow lovers. Steeped in mythology, this trek is sublime. 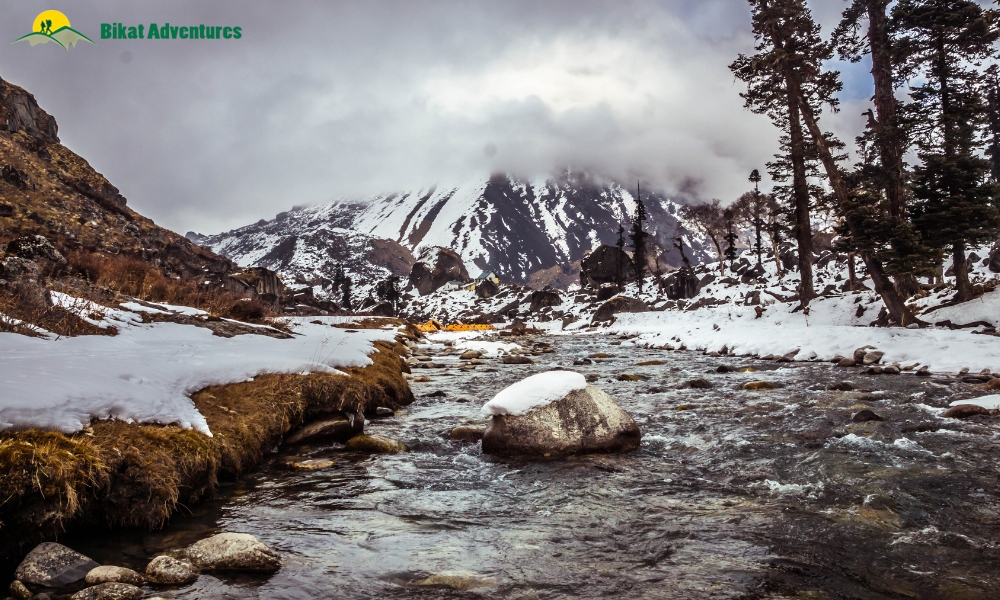 Satopanth lake trek will take you to Satopanth Tal, an amazing glacial lake whose beauty is heightened by the soaring snow-garbed foothills like Neelkanth, Satopanth (23,206 ft), Chaukhamba I and Balakun. The reflections of these amazing mountains on the crystal-clear glacial lake are truly a sight to behold!

The Holy trio, Brahma, Vishnu, and Mahesh are believed to have meditated at the three corners of the Satopanth Lake. The trek to Satopanth Lake is a spiritual journey as well. This isolated trek is a must do for those who love challenges as very as serene nature. 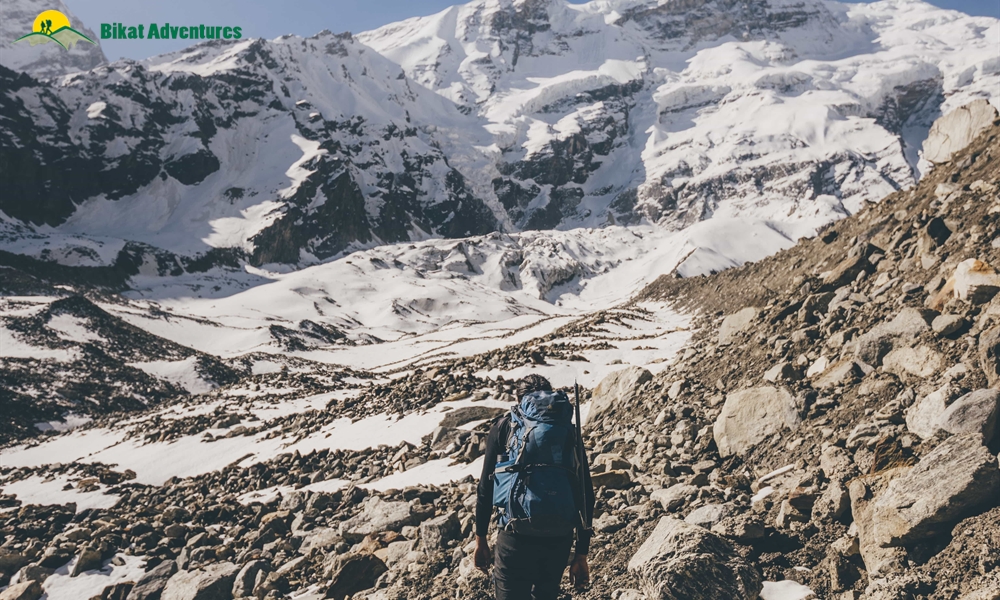 The trek to Valley of Flowers, a UNESCO Heritage Site, is perhaps the easiest trek in all of Uttarakhand and trekkers can attempt to trek this route without the help of local trekking agencies. This 4-5 day trek attracts visitors for its amazing display of wildflowers. Trekkers ought to expect ample rain and prepare correspondingly. One can also trek up to Hemkund Sahib, a pilgrimage site perched at an altitude of 14,200 ft. Rest assured, the exquisiteness of the wildflowers will make up for all the hardships! 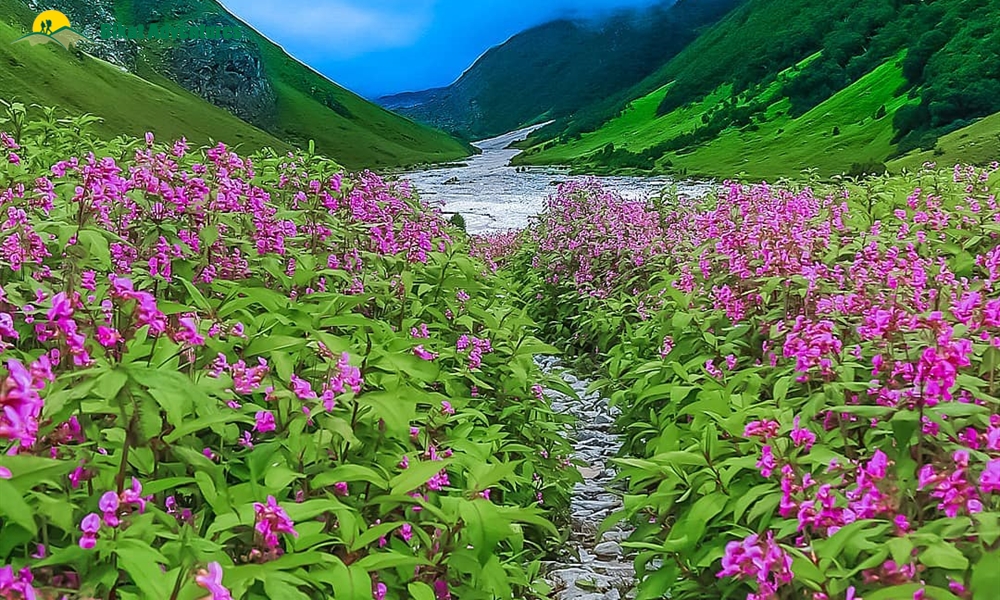 This is one of the best winter treks in the Himalayas, located opposite to the famous Roopkund Trek. A paradise for snow enthusiasts, the inimitable views of the Himalayan ranges should be your number one reason to go on this trek. The trail of this trek is entirely covered in snow and is a paradise for snow lovers. Some of the prominent seven thousanders visible are Trishul, Nandaghunti, Chowkhamba, Nilkanth, Kamet, Hathi, and Ghoda peaks. Most of the trail of Roopkund trek can also be seen from this trek, including views of Ali Bugyal, Bedni Bugyal & Junargali. 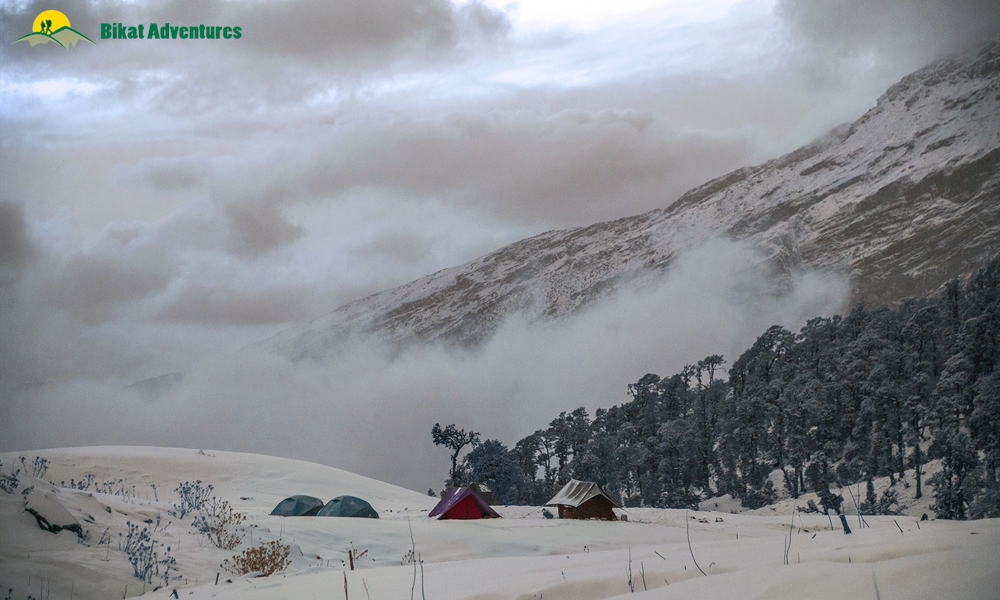 Kalindi Khal Pass Trek is the most difficult trek route in the Garhwal Himalayas. Trekkers will be expected to cover a distance of almost 100 km. The course of this rough trail connects the pilgrimage sites of Gangotri and Badrinath. The Kalindi Khal Trek is undeniably difficult and since some basic mountaineering skills are required to accomplish this trek, it is recommended for experienced trekkers only. This legendary trek takes you through rugged glaciers, crevassed snowfields, rocky moraines while unleashing magnificent views of some of the most prominent Himalayan peaks like Shivling, Meru, Kedar Dome, Nilkant, Avalanche Peak, Kamet, Mana, etc. 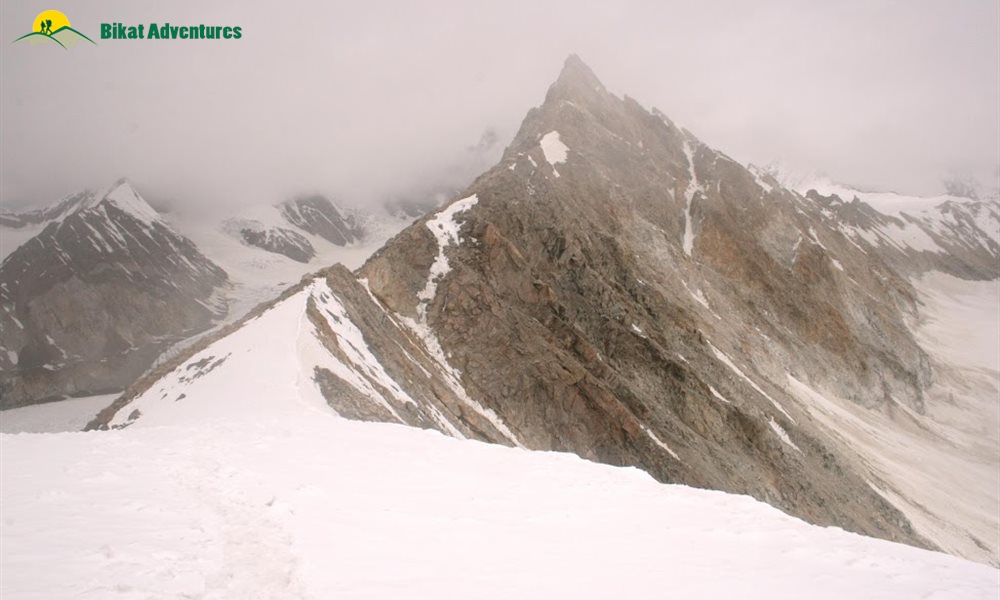 All of the above-mentioned treks in Uttarakhand will give you a glimpse of a variety of landscapes, from the luxuriant meadows, vast green valleys, infinite glaciers, rough terrains, snow-clad trails to humongous mountains.

But, there is one trek which is considered as the holy grail of all treks, that is the famous Roopkund Trek. With stunning campsites, beautiful meadows of Ali and Bedni, and surrounded by glaciers, the Roopkund Trek takes you to the glorious Roopkund Lake at the lap of the Trishul Massif, studded with hundreds of human skeletons. This mysterious lake is situated at a staggering altitude of 15,700 ft.  No trek can match the excellence of what Roopkund Trek has to offer.

Due to the excessive rush on this trail the beautiful meadows have been adversely affected. These meadows being the biodiversity hotspots need to be conserved hence the Hon’ble High Court of Uttarakhand banned camping in these meadows due to which the Roopkund trek is no longer viable.

Even though the grandeur and beauty of Roopkund trail are praised by all, we must not forget that trekking is all about new experiences. The other trails in Uttarakhand are of comparable beauty. Being comparatively less popular, these trails give you a chance to witness untouched and unadulterated beauty of the Himalayas.

We hope to see you on the other magnificent trails of Uttarakhand this season.