I have trekked many places with these feet of mine and seen peak after peak with these eyes in my head. I have felt the burn in my thighs on the way up, the exhilaration at the top, the searing in my knees on my way back down and the exhausted contentment as I crawl, accomplished, into bed after seven days at Nature’s mercy. 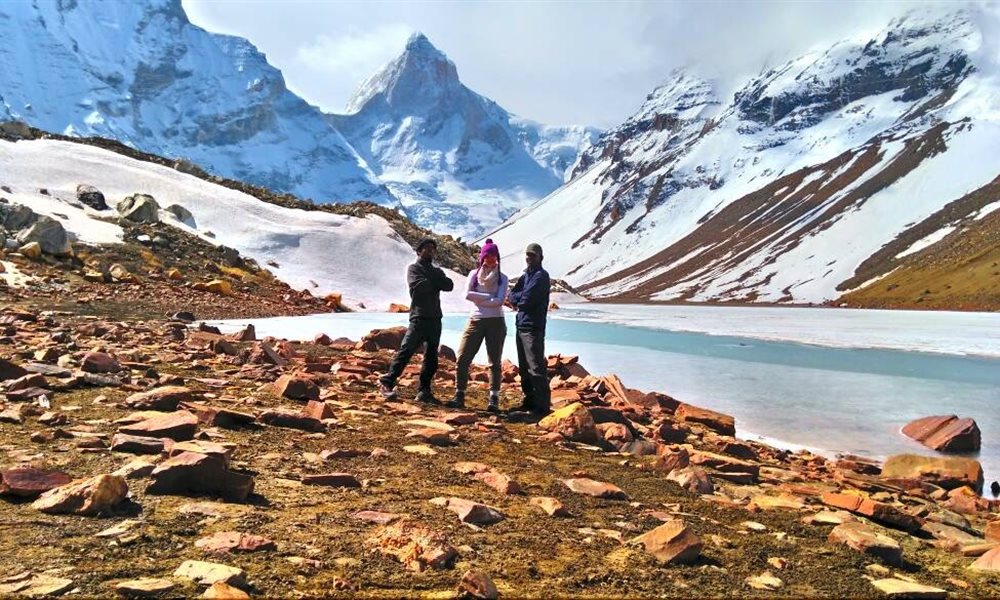 But my recent adventure up to Kedar Tal made me realize that there is a part of this journey I am forgetting to pay more attention to- that trekkers in general often brush mentally aside without even realizing they've done it.

Can you guess what it is?

Hint: it's the place you find yourself standing the moment you excitedly hop out of your transport jeep to begin Day 1.

Your trailhead is your host- the first person to greet you on the adventure you've travelled all this way for, but we oftentimes find ourselves so enamored with the idea of getting to our destination- that first camp, seeing the summit everyone’s been talking about- that we discard a treasure right in front of us.

Not until we were forced, by a lag in the permissions office, to stay put in Gangotri for a day instead of immediately hitting the trail for Kedar Tal, did I realize that your adventure starts even before your feet touch the trail. Gangotri is the trail head for many famous treks & expeditions like Vasuki Tal & Tapovan, Gangotri iii, Auden's Col, Kalindi Khal, and more.

Allow me to explain, with my story. 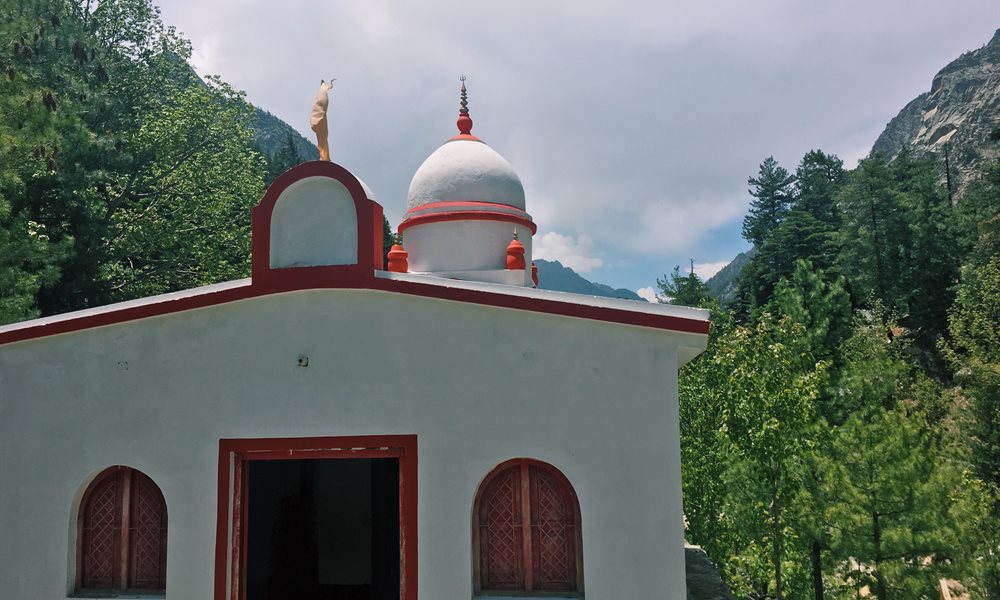 Disappointed that we would have to wait until morning to begin our ascent, Sandeep, Rohit and I looked at each other with that face that is universally recognized to mean, “What now?”

The day was unwritten, and Gangotri, the holy town frequented by Hindu pilgrims, was our paper.

Aimlessly, we begin to explore with heads clear of expectations, hearts filled with nothing but curiosity (a good recipe for an excellent day, if you ask me).

The town receives thousands of visitors each year- pilgrims coming to visit the holy river Bhagirathi that originates the mighty Ganga. Hindu legend has it that, after several centuries of carrying out penance in hopes of absolving the sins of his ancestors, Goddess Ganga finally granted King Bhagirath this request in the form of herself as a river on Earth. 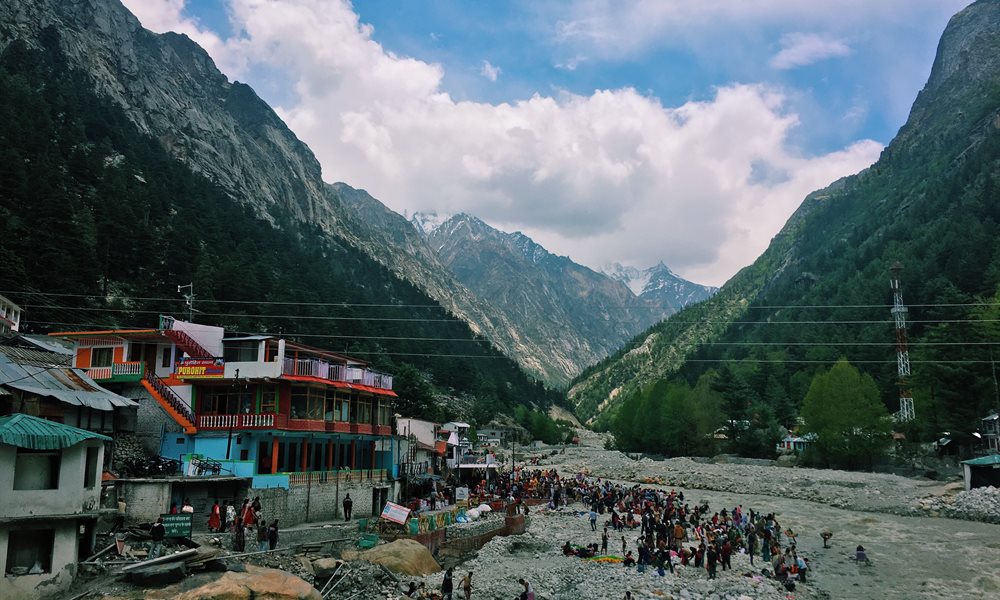 This force was too much for Earth to bear, and so Lord Shiva brought the river into his locks of hair, one of which is now the Bhagirathi river, which I am now standing on the banks of.

The town square is dazzling white stone, dotted with the bare pilgrim feet that dart across it, offering marigolds and rupee notes, chewing prasad in return with freshly-placed tikkas glistening on their foreheads. 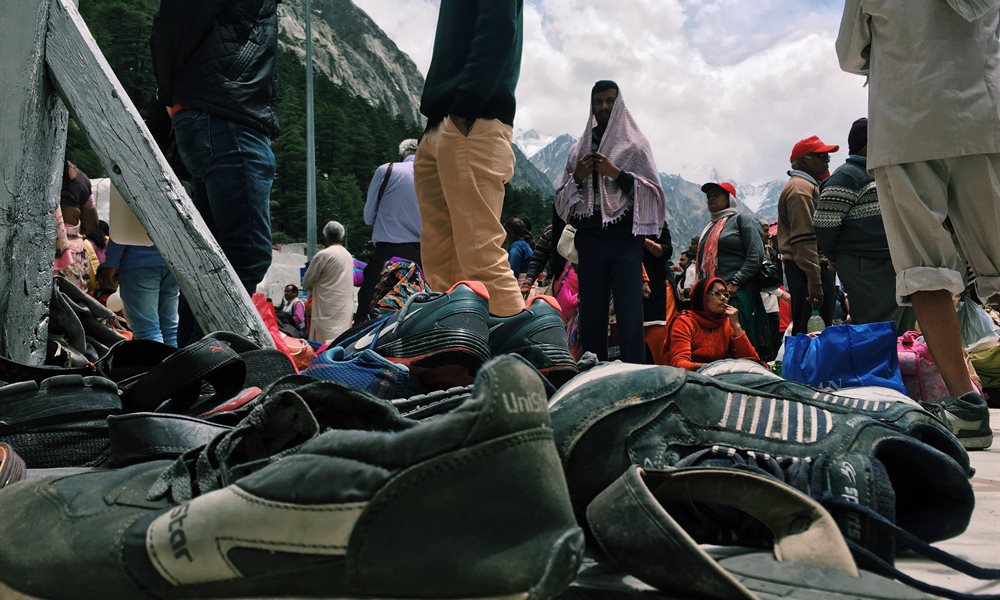 The whole place is alive, and at the center sits the iconic, 300 year-old temple, pure and adorned with flowers and bells. 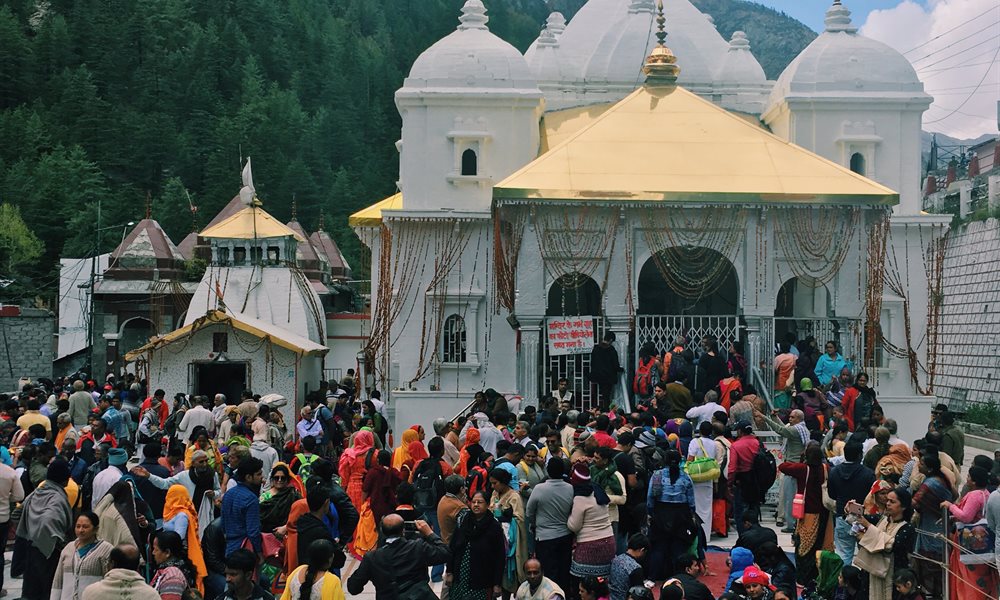 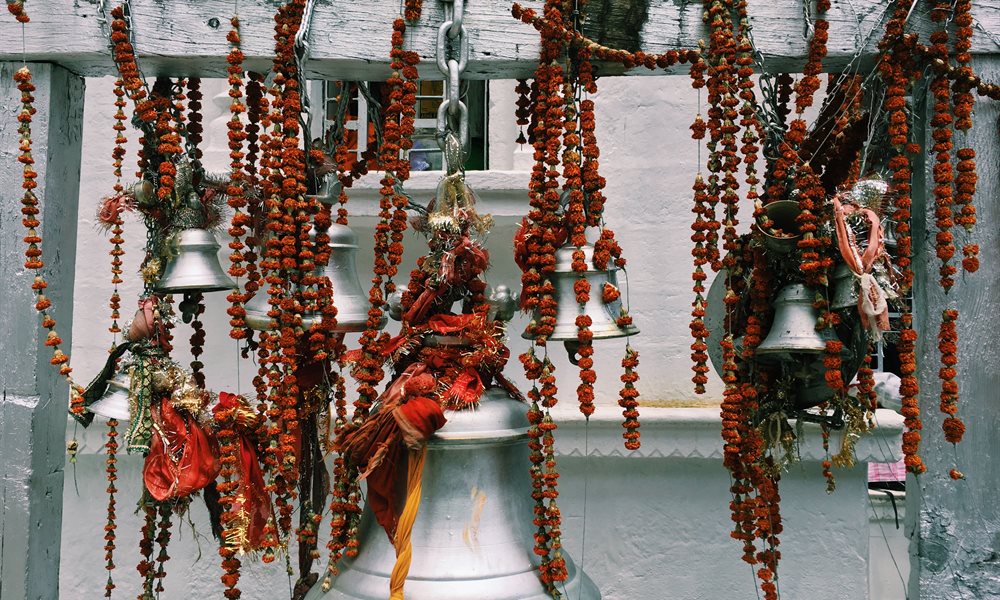 We make our way through the bustle, cross the bridge over the deep gorge cut by the roaring river, and suddenly find ourselves on a pathway that winds gently through a pine grove.

We walk and walk, drinking in the smell. Sadhus smile and greet us as we pass by- this green forest is filled with their orange.

An hour passes without us realizing as we perch ourselves on a sunny rock with one such religious devotee and ask each other about our very different lives.

Everyone here seems to accept this simple statement without a second thought, but this place is far from my home on the opposite end of the earth, and the drastically different mindsets here constantly enthrall me.

I must know more about this. 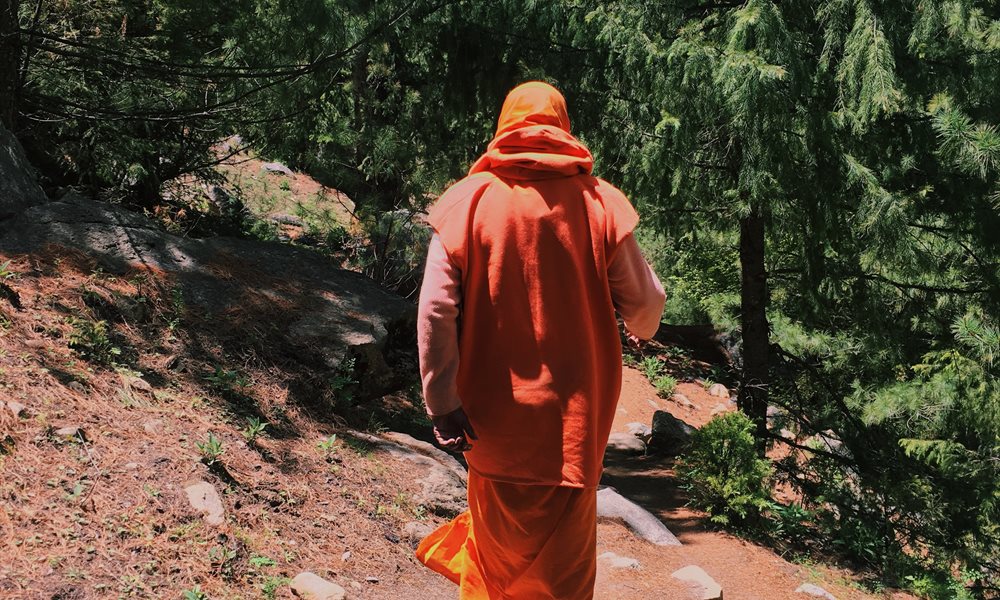 He tells me he spends his days praying and meditating.

“How many times have you prayed today?” I ask.

I ask him what he prays for, but that is not for me to know- his guru gives him secret mantras that are for their eyes only.

“Do you ever wish you could go back home?” I say, “What if someone becomes a Sadhu and then decides they don't like it?”

He tells me that Sadhus can return home to normal life when they find their energy- when their motive is finished, usually after 5-10 years. But, he says with a grin, ones who stray from the ways of a Sadhu get “kicked,” in his words, by the gods.

As Sandeep translates between us, he asks me about my choice to travel halfway across the world alone at age 21. He asks me about my views and Christianity. It feels like such a good trade for us to both be helping the other learn more about the world.

A parting embrace later, and we take his leave to resume our forest explorations. We pass through humble ashrams and sleepy cottages, until we stumble upon a new treasure- a massive rock towering over our heads, and at the base, a tiny little doorway. 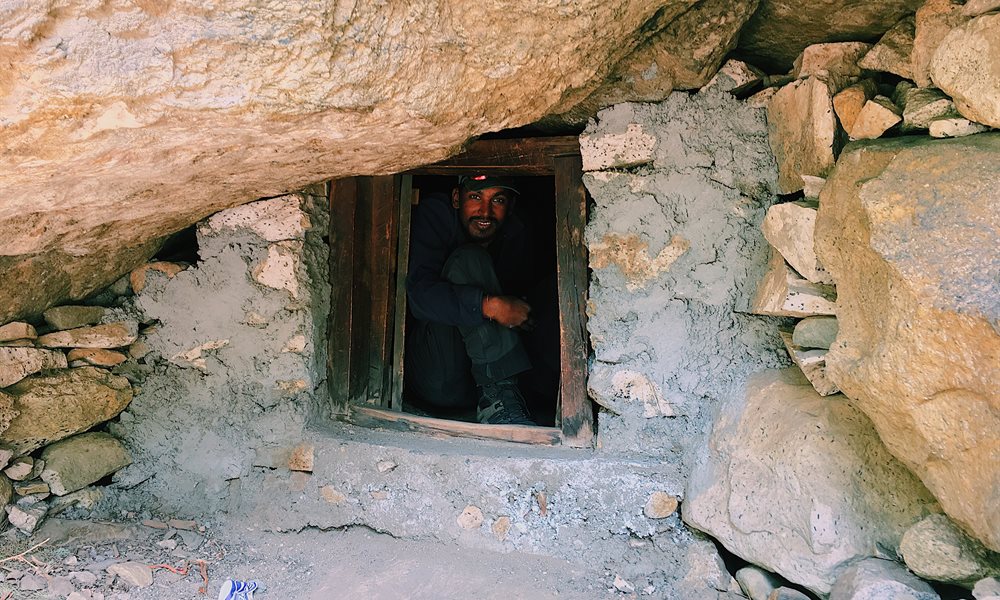 Captured by our imaginations, we squeeze our bodies through the small entrance and our jaws drop as it opens into a…

Two Sadhus sit peacefully, stirring a hot pot of chai in what looks like a kitchen-bedroom combo. 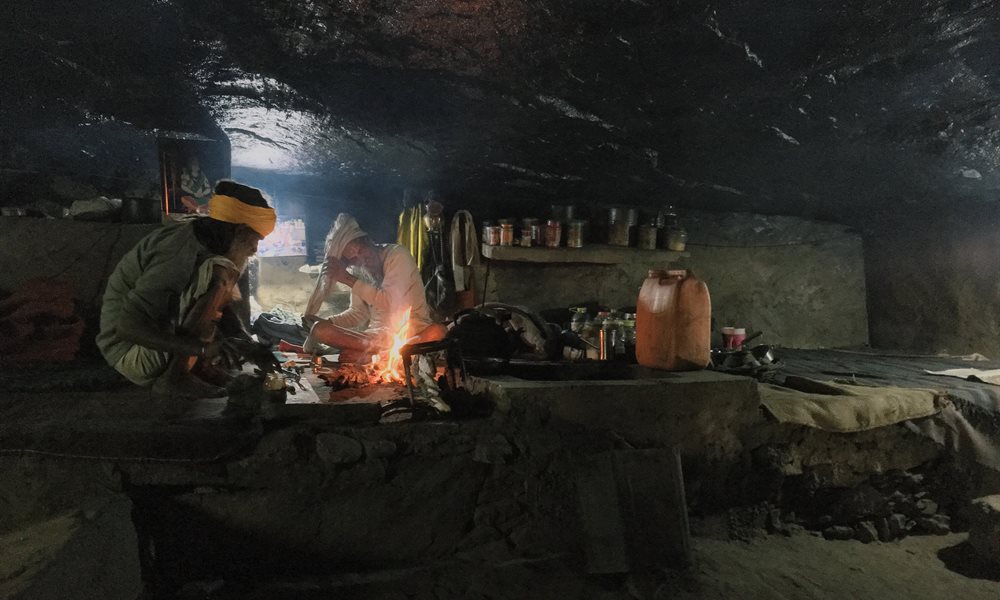 They offer us prasad and we chew quietly, admiring the awesome simplicity of the home we have accidentally just crawled into beneath the earth.

Heading back the way we came, we find yet another hidden gem, but not before first sharing a package of biscuits and falling asleep in the sun-shade of the pines.

Our newest discovery Surya Kund, is a raging waterfall of the Bhagirathi that has etched the most strikingly severe pathway into the stone it now tumbles over. Legend says that this “sun pond” is the point on Earth where the sun’s rays first touch down. 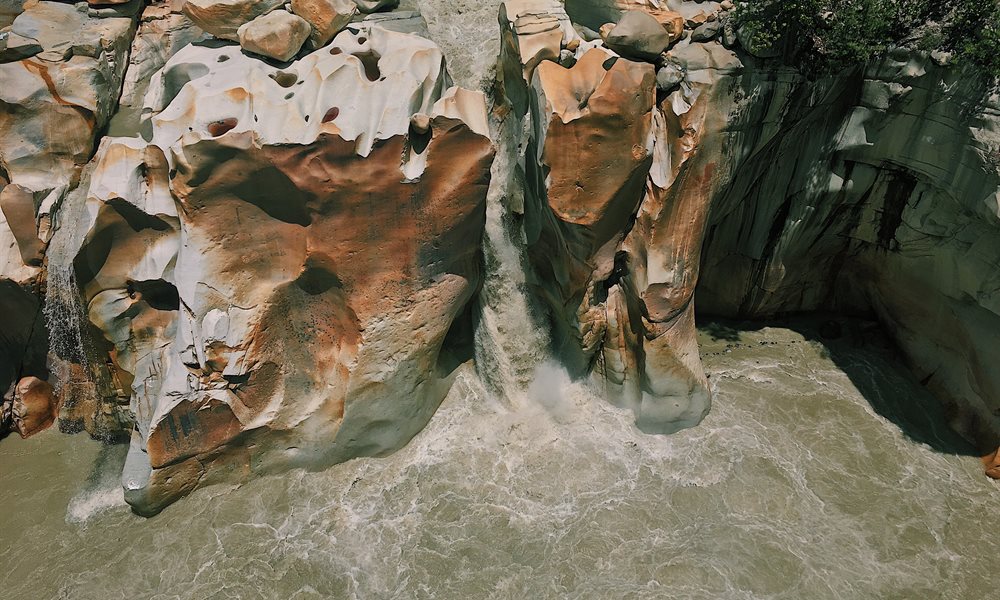 No wonder everything feels so bright and fresh.

A small hut emerges from the trees, and we, without realizing at first, walk straight into a home-grown museum dedicated to meditation, and we gawk at the photos and artifacts. 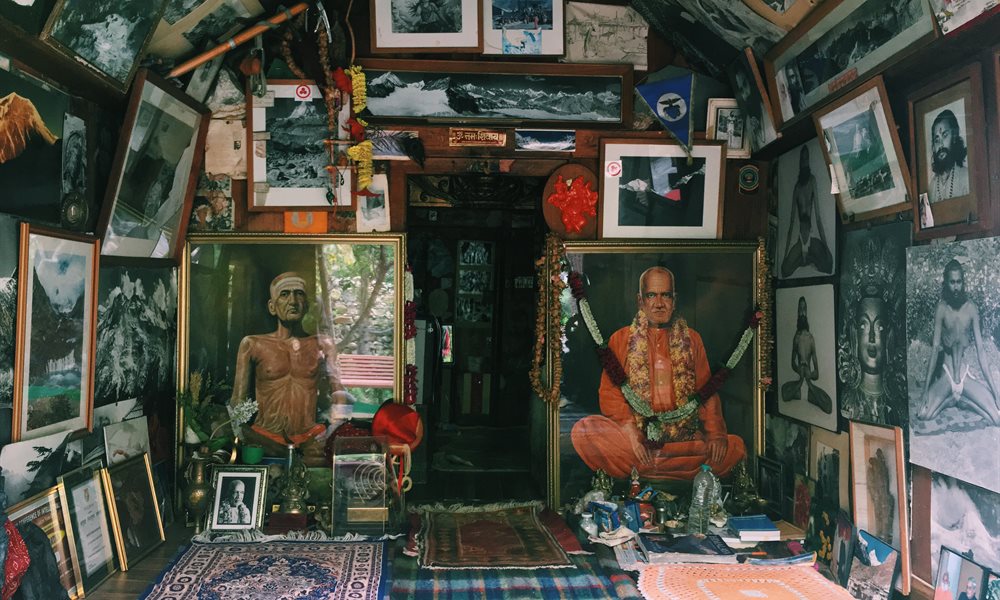 The nightly aarti at the temple was stunning, crowning a wonderful day with one final gem. 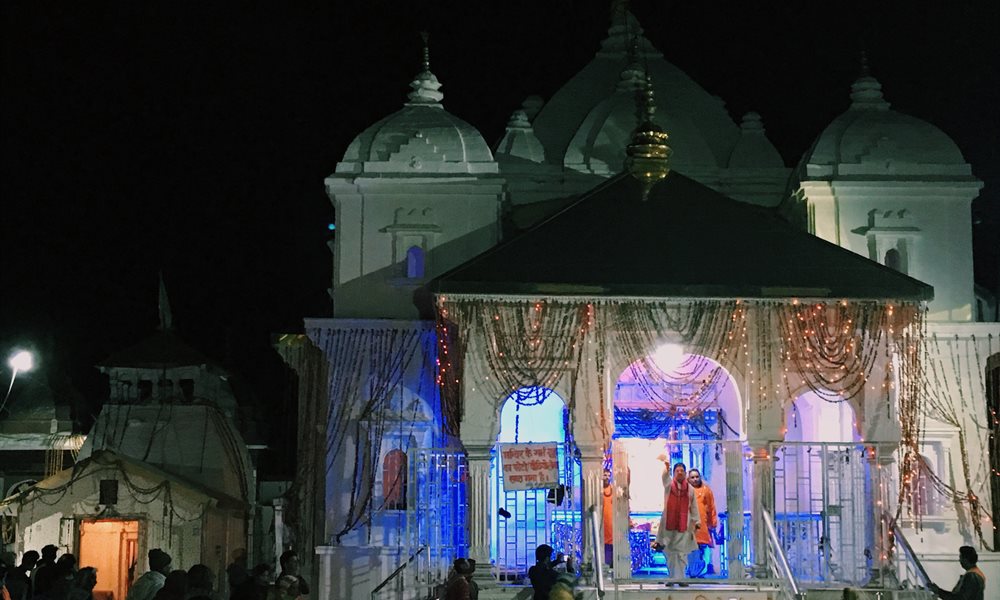 That night, after a happily-devoured dinner of dosas, I settle into my cozy bed, knowing that at daybreak tomorrow I will be lacing up my worn hiking boots and carrying myself off into the wild.

Because the adventure I came for hasn't even started yet.

But I've already had one.

Always remember to enjoy the adventure of being exactly where you are.