Skiing in India - Complete Guide to Where, When and How

So you’ve decided you want to trade your hiking boots out for some skis. Good choice.

Turns out, skis were used even before the 18th century as a way for Scandinavian farmers, hunters and warriors to get around a little easier in the snow, and they’ve been a hit with adventurous spirits ever since. If you’re amongst those, and “Ski India” is the next thing to check off your adventure bucket list, here is your 101 guide to everything you need to know about skiing in India, with a focus on India’s best skiing site, Gulmarg.

Complete Guide to Skiing in India 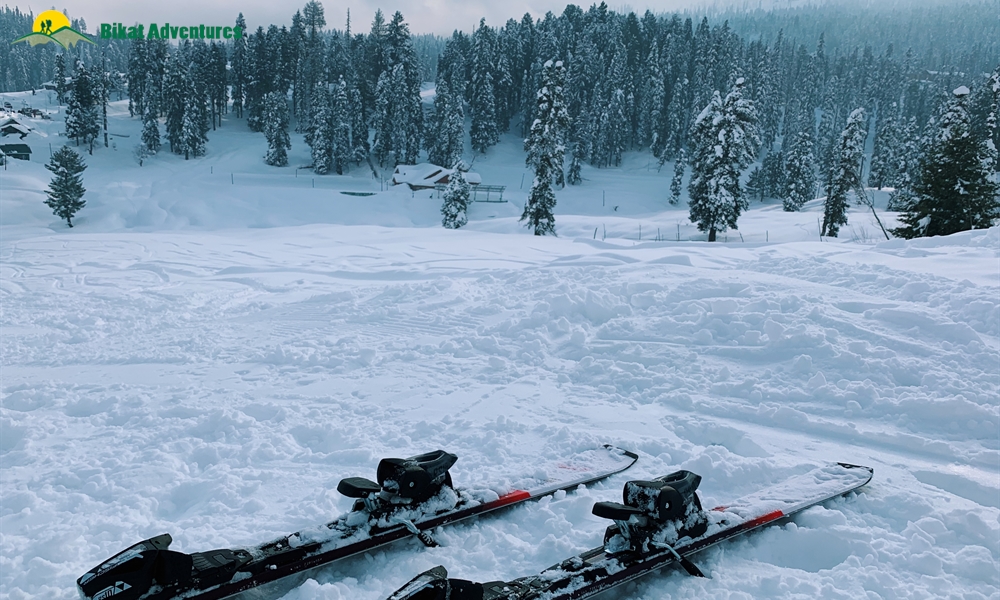 The best time to take a skiing course in India is generally between mid-January and mid-March, with those months holding the most promise for fresh snowfall and temperatures consistently low enough to prevent melting.

Whether you’re an expert or beginner, this is also the best time to visit Gulmarg, the famous skiing town tucked into the snowcapped mountains of Kashmir. Along with Gulmarg skiing, India has two other prime locations for the winter sport; Auli skiing and Manali.

Auli, Uttarakhand is situated in the Garhwal Himalayas, and boasts a 500m long ski lift to a maximum height of 3,049 meters for downhill skiers, along with cross-country runs spanning between 10 and 20km. The resort, managed by Garhwal Mandal Vikas Nigam, an initiative run by the government of Uttarakhand, offers ski packages ranging from three nights for INR 25,000 to seven nights for INR 63,000. Several private operators to provide visitors with alternative options to take an Auli skiing course as well. The best time to visit Auli is December-end to March.

Manali, Himachal Pradesh is another alternative for thrill-seekers, who should head out of the famous hill station a bit toward Rohtang Pass and the Solang Valley in order to connect with local ski course operators. The skiing season lasts mainly from December through January, when the regional snowfall is at its apex. 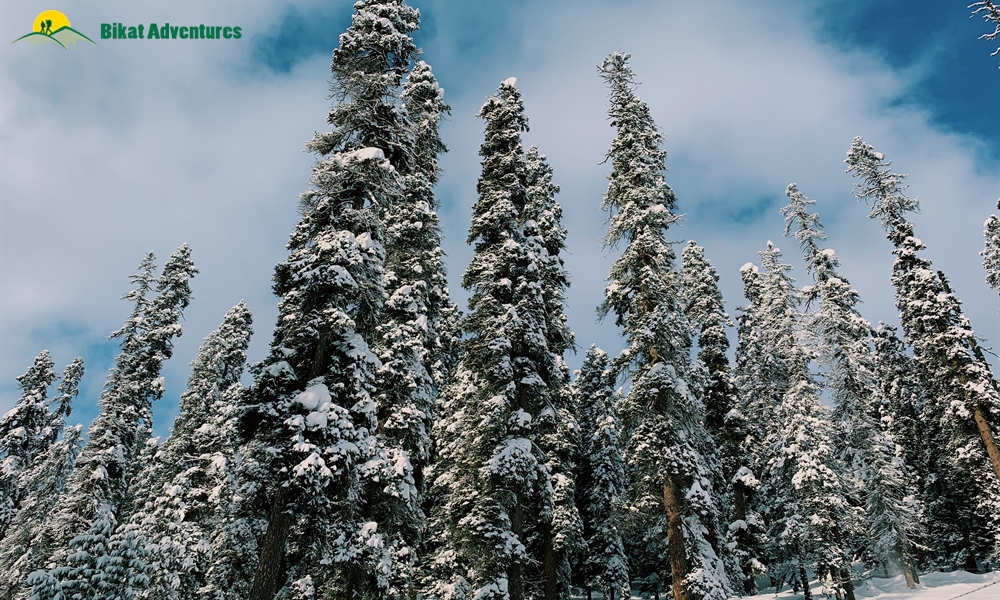 Gulmarg however, has been repeatedly named as the pinnacle of both Kashmir skiing and of India’s Himalayas, and for good reason. Each winter season these pristine mountains become blanketed in India’s most impressive snowfall, with fresh storms bringing in new powder periodically throughout the season. The white-tipped pine trees tower above you in all directions, until you emerge from the treeline on Gulmarg’s gondola, one of the highest in the world.

How to Reach Gulmarg:

By Flight: Srinagar is the closest airport to Gulmarg and connects with most major domestic airports in India. From Srinagar, travel options by road are listed below.

By Train: The nearest railway station stops in Jammu, the winter capital of Jammu and Kashmir, approximately 290km away from Gulmarg. The main trains servicing this station are Jammu Rajdhani, Himgiri Express, Swarak Express and Andaman Express and Himsagar Express, and connect to most major railheads in India.

By Road: The road from Srinagar to Gulmarg is a stunning drive up out of the Kashmir Valley. A taxi can be negotiated for around INR 1,500 and shared cabs can be taken for a lower rate. Buses run frequently from both Sonmarg and Srinagar as well as several other nearby towns. The Srinagar to Gulmarg distance is approximately 56km.

Insider Tip - Keep in mind that many taxis will attempt to stop at Tangmarg, a town 39km from Srinagar and request you to take another cab more suited for the final snowy ascent for an additional INR 800. This can be avoided by ensuring with your originally booked cab that your fare includes the entire journey, not just to Tangmarg.

Where to Stay in Gulmarg

The lodging situation in Gulmarg winters is nothing short of a dream. With the snow blanketing the mountains, trees, and hotels, the scene is pretty surreal. The hotels are built log cabin-style, leaving the fresh smell of pine in every lobby and creating a quaint, cozy environment to come home to each night after a day on the slopes. 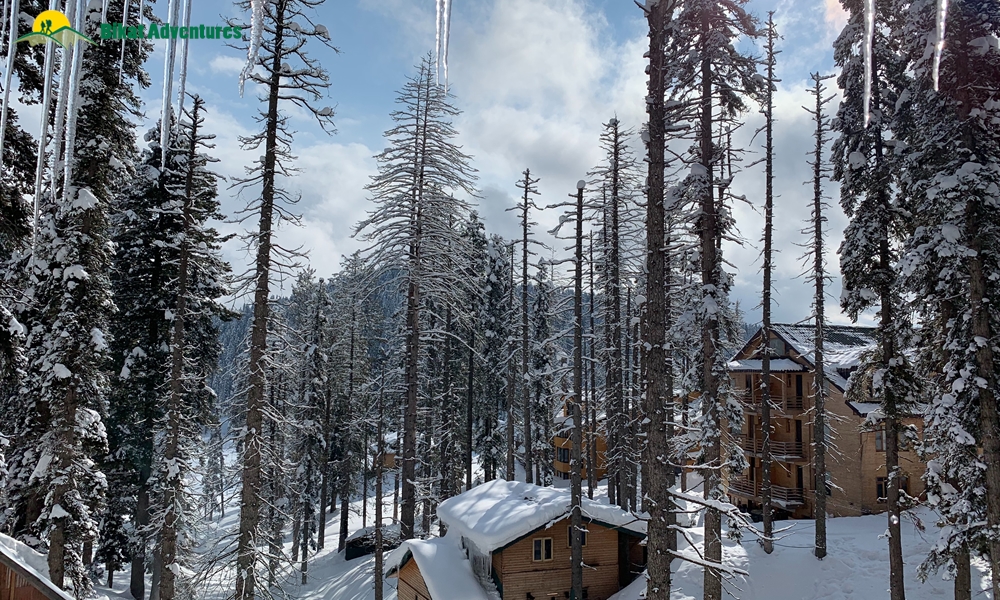 Lodging ranges from budget stay to luxury, with basic room packages costing around INR 1,500 to 2,000 a night for a sizeable room, electric blankets, mobile heating units and (depending on the hotel) round-the-clock or timed central heating. Gulmarg temperature averages at around -2 degrees Celsius during the day and -10 degrees at night, and Gulmarg weather can be anything from a brilliantly blue day to overcast and blizzarding, so the heating situation is an important one to assess when booking your accommodation.

Places to Visit in Gulmarg

While it’s is primarily a skiing destination, there are a lot of cool places to see in Gulmarg. First off, it boasts one of the world’s tallest, most impressive gondola and chairlift system. It is built in two stages, bringing both skiers and sightseers alike to Stage 1 and 2 of Gulmarg’s bigger slopes, the latter of which sits at a height of 4,200m and provides phenomenal views of Gulmarg below, the shockingly wide basin of Kashmir Valley in the distance and the rising Pir Panjal mountain range on the other side. Do not miss it. 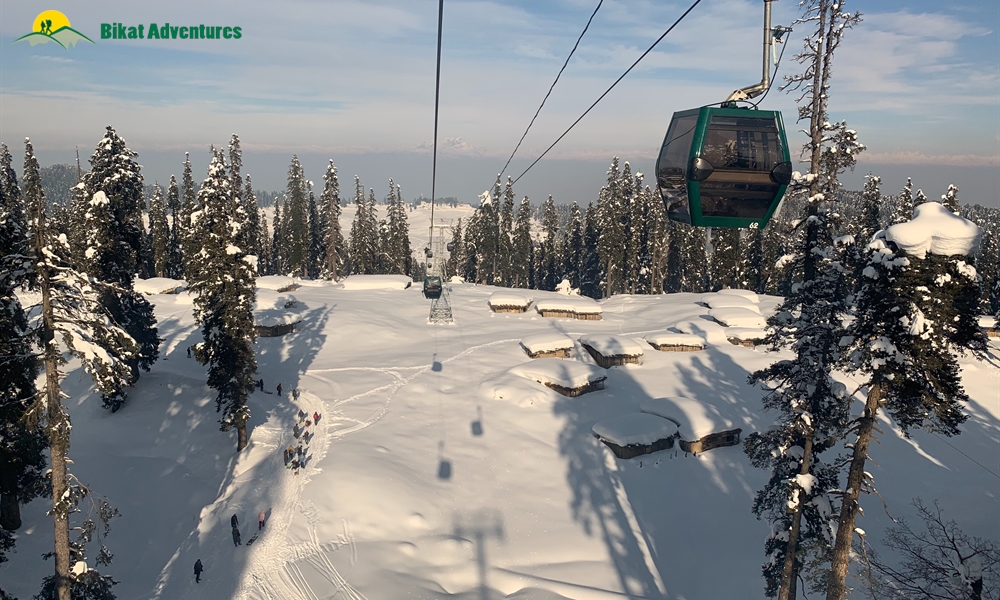 Stage 1 also provides visitors with a selection of dhabas. Enjoy a cup of chai or some Kashmiri biryani with an absolutely spectacular view. 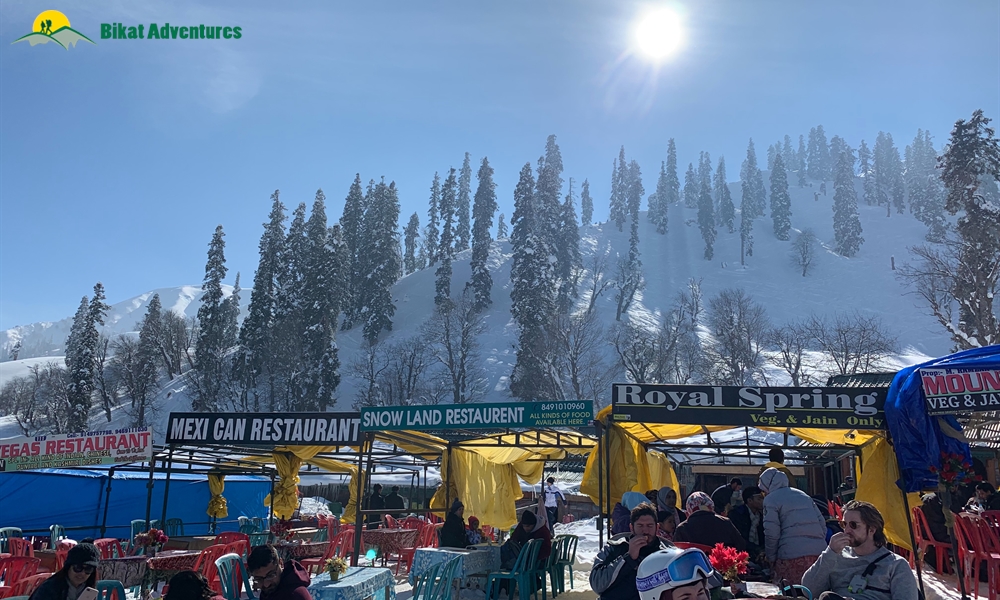 For those looking to begin their skiing adventure, Gulmarg has excellent beginners’ slopes further toward the center of town- Beginner Slope, Highland Slope and Slope 85.

Here and around are nice dhabas to sip Kashmiri kahwa, take a sled ride, hire ATVs or snowmobiles for an adventure and the town market to stroll through. Several hotels offer a cozy après-ski.

But of course, the best thing about Gulmarg is the thrill of strapping on those skis themselves and seeing what you can do with them. Beginners have the option to either come independently and hire a local guide, which can easily be found on the beginner slope (don’t worry about looking for them- if you don’t look like you know what you’re doing, at least 5 will immediately flock to you and offer their services).

The government equipment rental shop is right next to the beginners’ slopes as well, and rent out a pair of skis, boots and poles for INR 800 per day. Private rental shops are also available nearby. 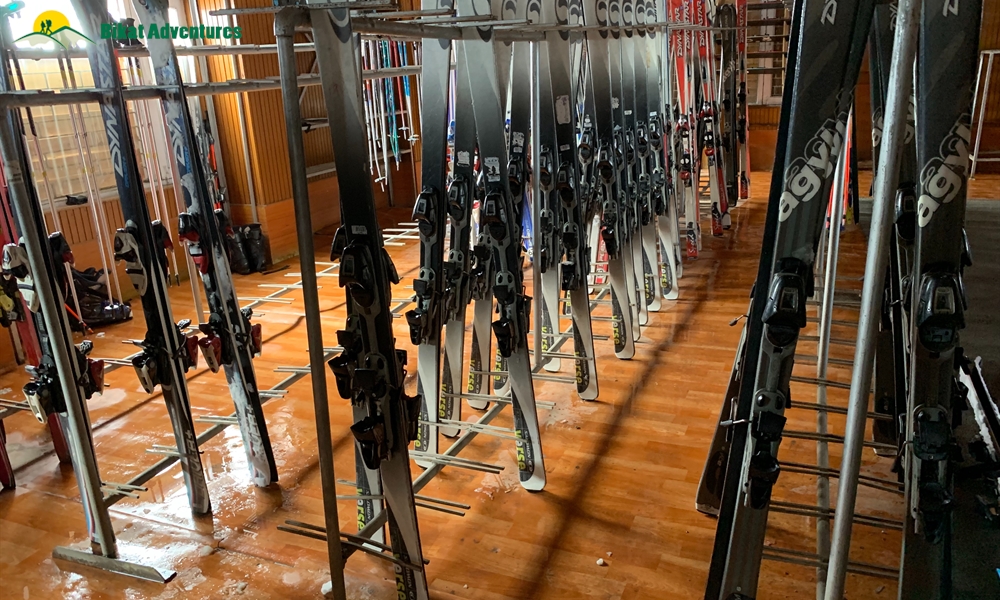 The perk of going with an operator like Bikat Adventures however, is twofold; you don’t have to deal with any organization, and there is a guarantee of quality ski instruction.

The first is fairly straightforward - we organize cozy lodging, equipment and a well-rounded beginner ski course taught by experts so that all you have to do is show up in Gulmarg - everything else is taken care of for you.

With ski instruction, while many of the men claiming to be instructors on the beginner slopes can do some flashy moves, they are not qualified or equipped to help teach others. Our course is run by professionals, who have a history of giving others an excellent introduction into all the necessary beginner skills required in skiing. 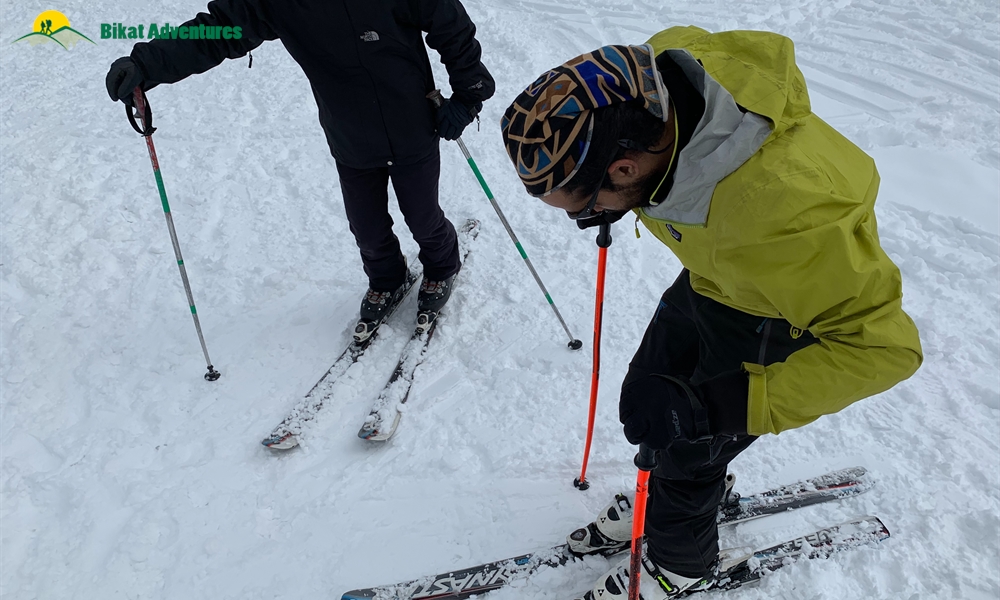 With our 8 day beginners course, you will follow a steep, but rewarding learning curve. You will learn equipment management and assembly, proper stance, movement techniques to get into positions, basics like pushing off, control, stopping, confidence-building, turning, speed techniques and the additional skills and adjustments that can be applied to each of these basic moves to advance to intermediate slopes by the end of the week.

We promise you, after 8 days, you will have gained a confidence on the slopes you never could have imagined at the beginning of the course- and you’ll leave, but only because you know that you’ll be back as soon as you can. 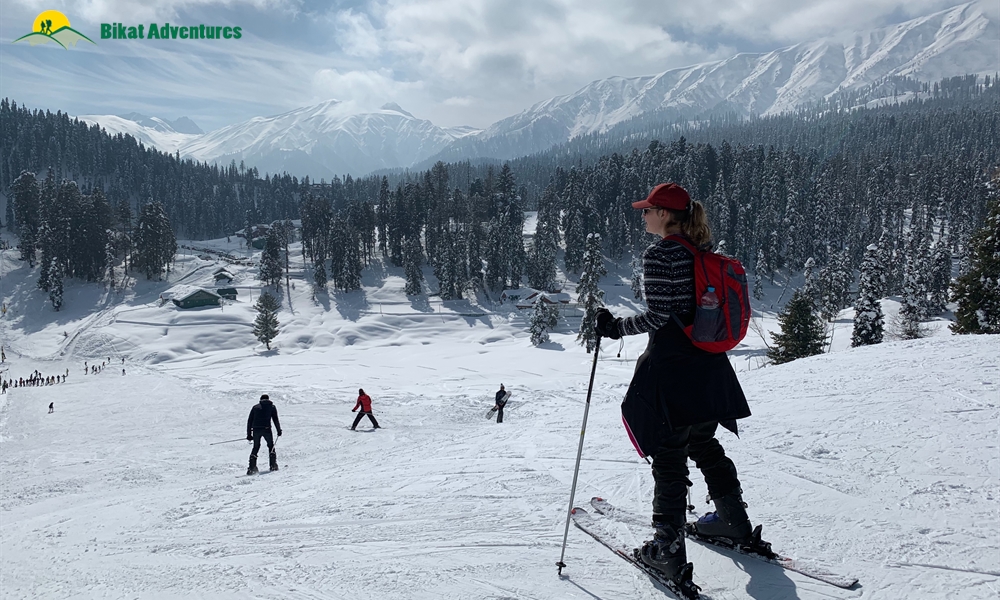