So here is what’s going to happen. I will show you some epic pictures and you’ll go like ‘man that’s awesome’ and when you go and see those places for yourself, your heart will skip a beat, because experiencing something is better than seeing it online.

Pin Parvati Pass is insanity. Full stop. If you are a photographer, you have just found your Himalayan jackpot, and if you are not, this trek will turn you into one.

Kullu valley is a little bit of heaven with a wild heart. And Spiti valley is somewhat like a lone wolf, tough and content with its isolation. As you step from one valley to the other, the dramatic change in the landscape will make you feel like you are in a different country altogether. But you’ll see indefinite beauty in both valleys.

Throughout your journey, you’ll notice some major differences, and if I were to categorize them, I’d club them into religion and beauty.

While you’ll see Hindu idols and temples in Kullu, you’ll see symbols of Buddhism in Spiti. 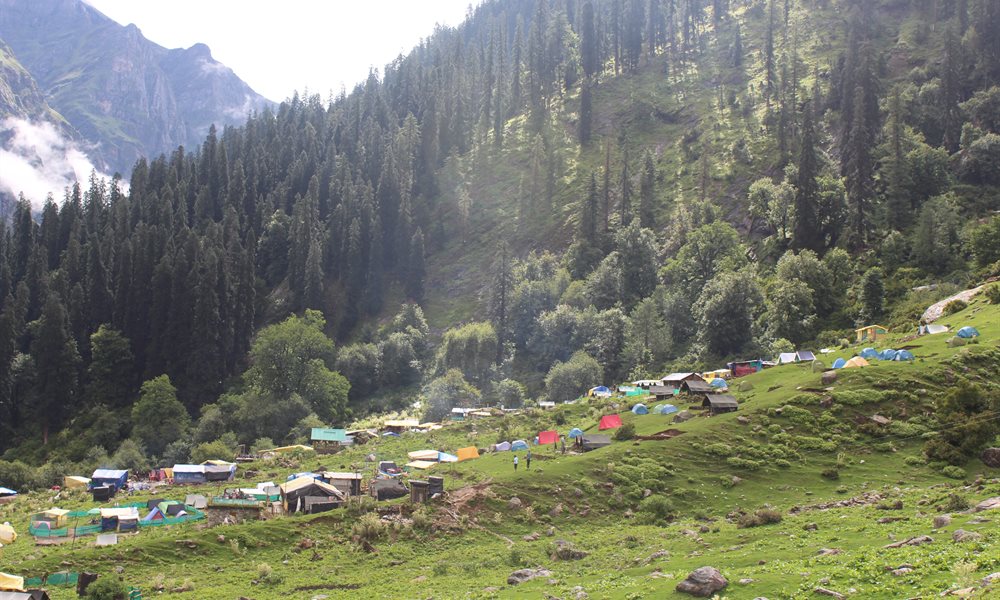 And then, at Mantalai lake, the last campsite before the base camp, you’ll stumble across a small Shiv temple. This is a symbol of the union of Lord Shiva and Maa Parvati, it is said that this is where they got married. A lot of people trek to Mantalai lake to come to see this temple.

On the other hand, you’ll step into the land of prayer wheels, monasteries, and prayer flags beyond the pass.

You’ll find prayer flags fluttering in the wind at the pass, on top of Gujjar huts and of course in Kaza. There is a common misconception that these flags carry prayers to God, but that’s not the case. Prayer flags are hung in places where they can flutter with the wind because the Tibetans believe that the prayers and mantras written on the flags will blow in the wind and spread goodwill and compassion in all prevailing space. Yup the entire universe. Even the colours of the flag represent different elements. White symbolizes air, red is fire, green is water, yellow is earth and blue is wind. They also represent directions – North, South, East, West and Center.

I can go on about them because I find them fascinating. But I will spare you the rest of the details. 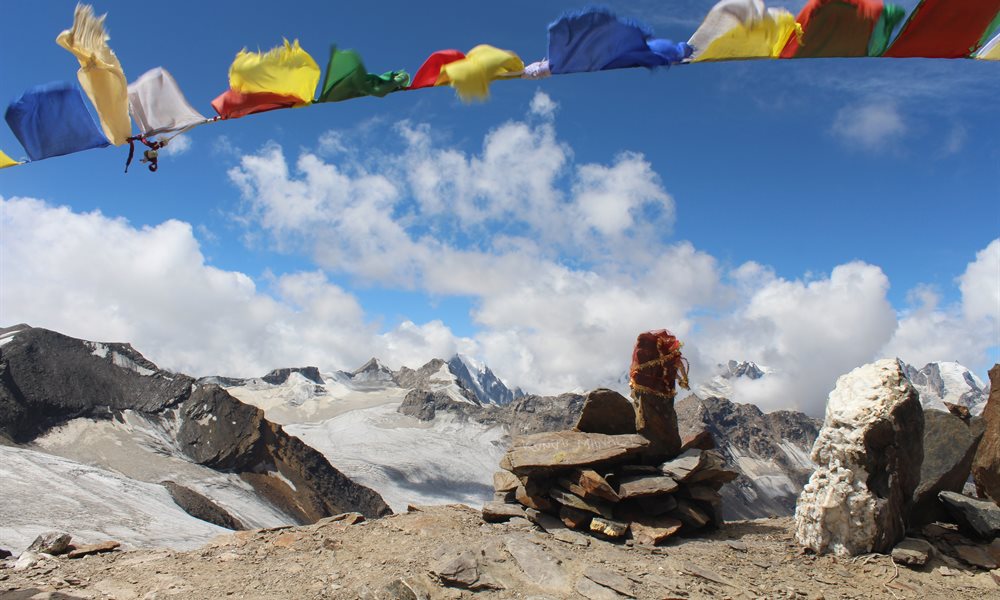 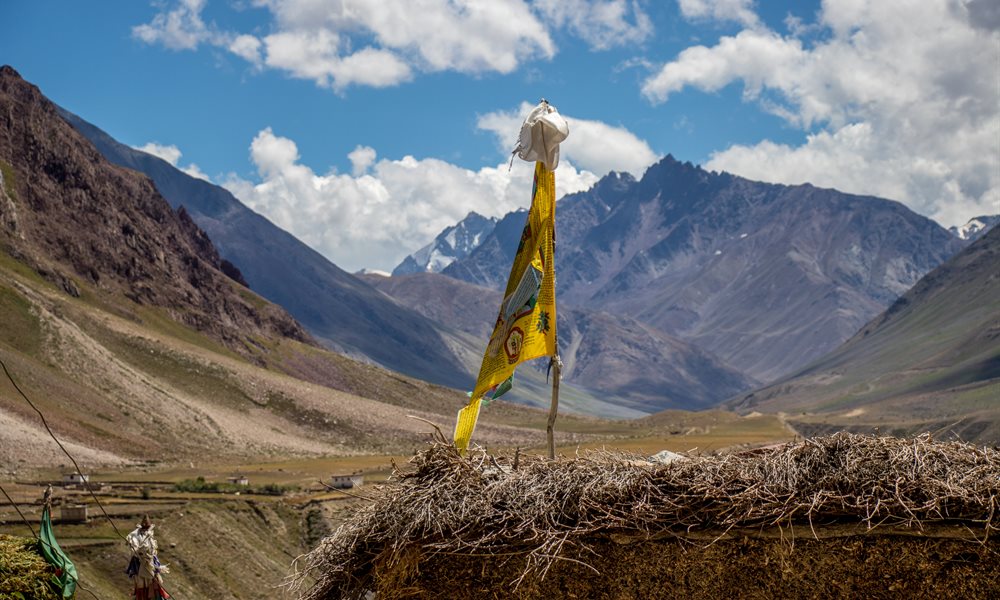 Picture of Key Monastery in Kaza, courtesy of Shaiwal Thakur. 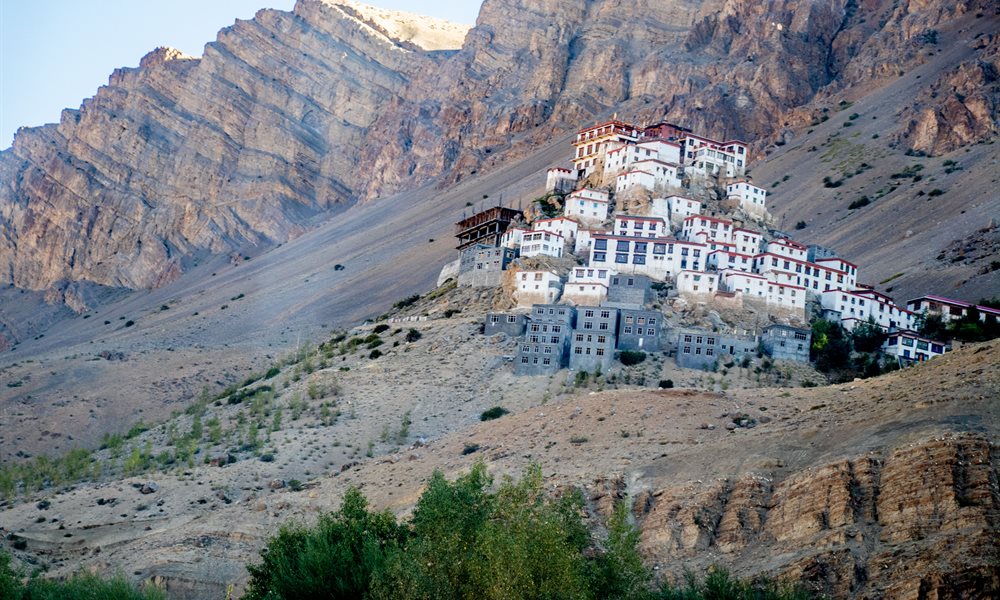 The landscapes of both valleys are incredible, and incredibly different too.

Kullu valleys hosts beautiful pine forests, grassy meadows, lakes and many many waterfalls along the way. Every place is lush with tropical vegetation, and sometimes you just want to sit and stare in awe at everything that surrounds you.

It also rains quite a lot in Kullu, no wonder everything is so green. Which also means you might see rainbows on the trek, and who doesn’t like rainbows. 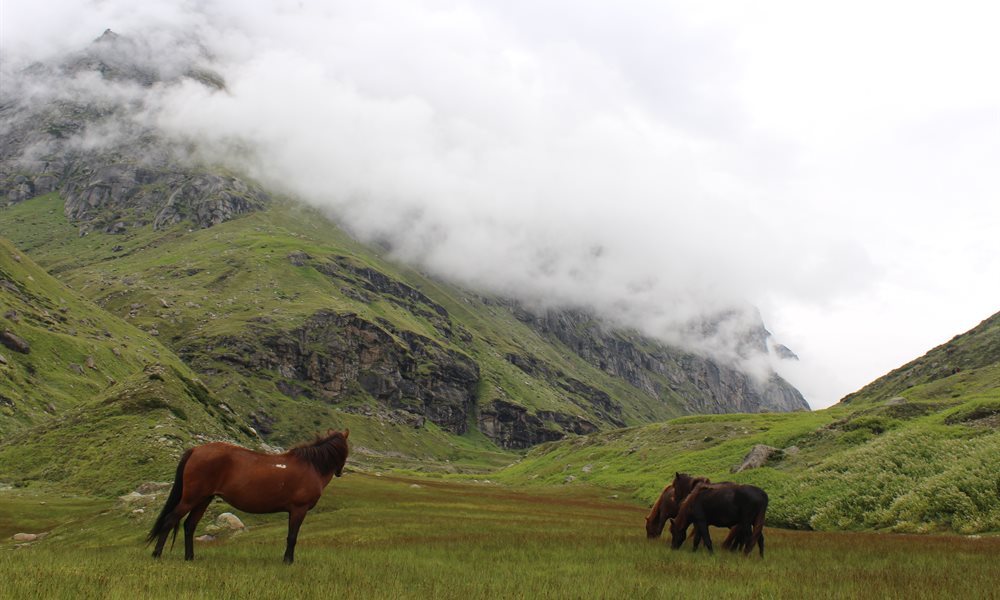 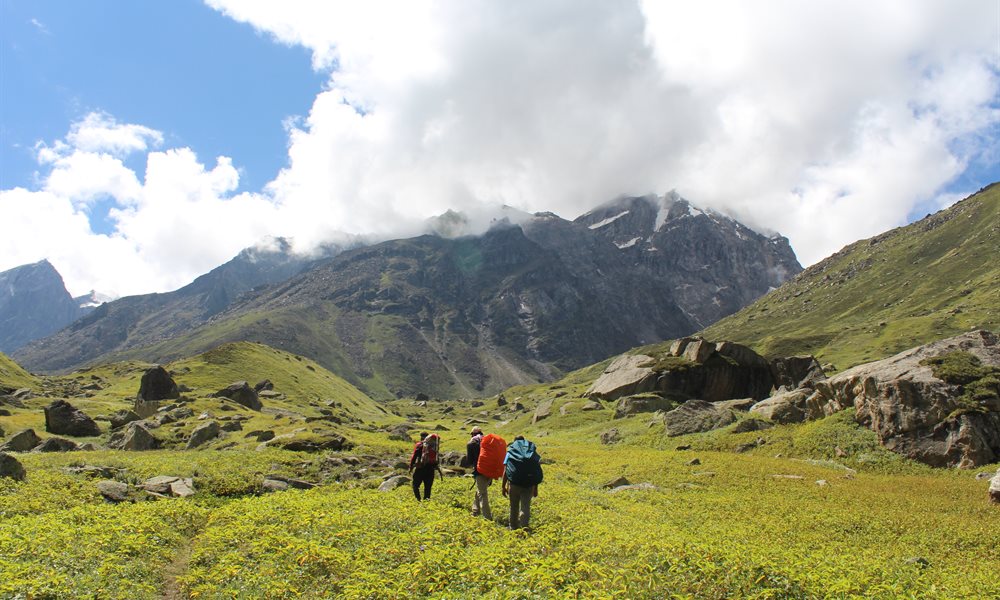 As you move closer to the pass, the landscape changes again, it’s less lush, but just extremely grand. You’ll even find several unnamed lakes at a distance in some places. 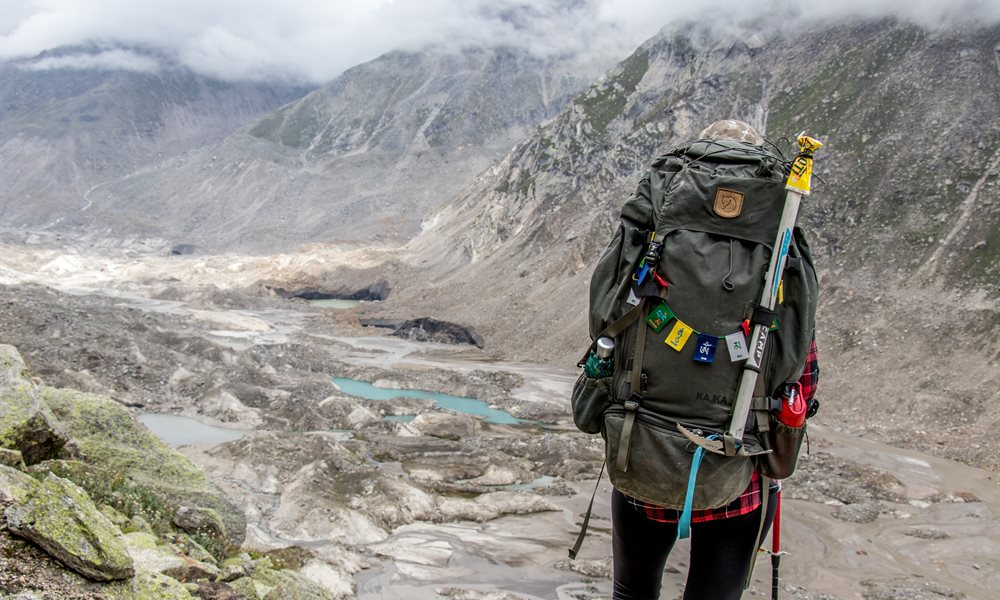 Spiti valley, on the other hand, represents the beauty of a different sort. It holds badass glaciers, barren and rugged valleys, and lots of scree and moraines. It is a rough and tough terrain. I am sure you are thinking 'What's so great about a barren landscape', but all I can say is, you'll know when you walk in Spiti valley yourself.

Maybe I can try and explain to give you an idea. Remember when you were a little kid, and everything around you just felt gigantic. Out of your reach. You were just too little for everything; door handles, buttons in a lift, and the cookies jar on the kitchen counter and so on. You'll feel somewhat similar walking on the huge glaciers and the valleys in Spiti.

You’ll notice the immediate change in scenery from the pass, but you’ll have this gnawing feeling in your stomach that something is missing here. And it won’t hit you until much later, that there are no trees in Spiti valley. It’s just naked mountains and the pure blue skies. Yes, it’s quite barren and rocky, but it’s also beautiful and outlandish. 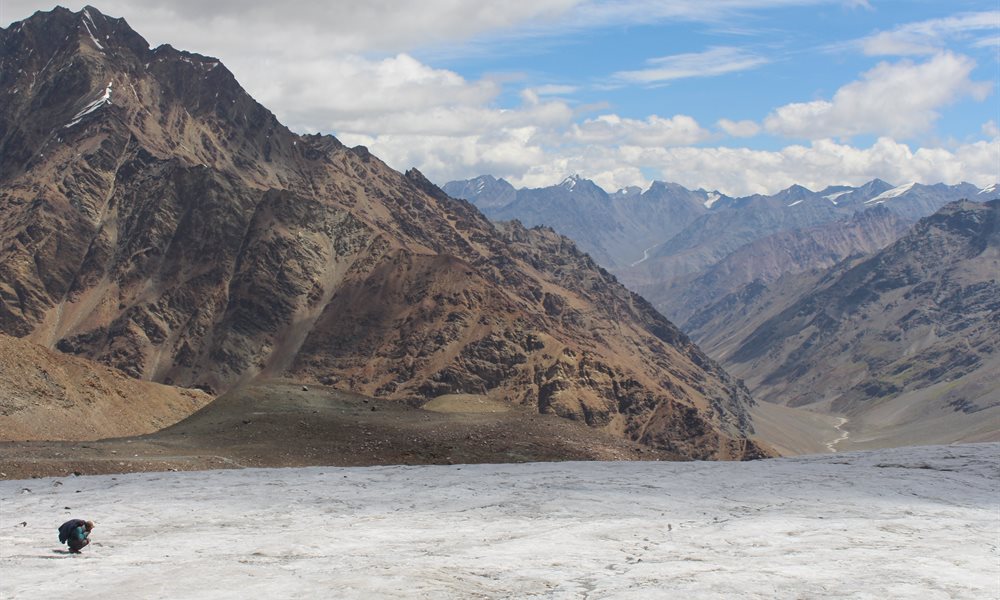 You’ll get a chance to tune out the world and hear your own thoughts in the emptiness that surrounds you. 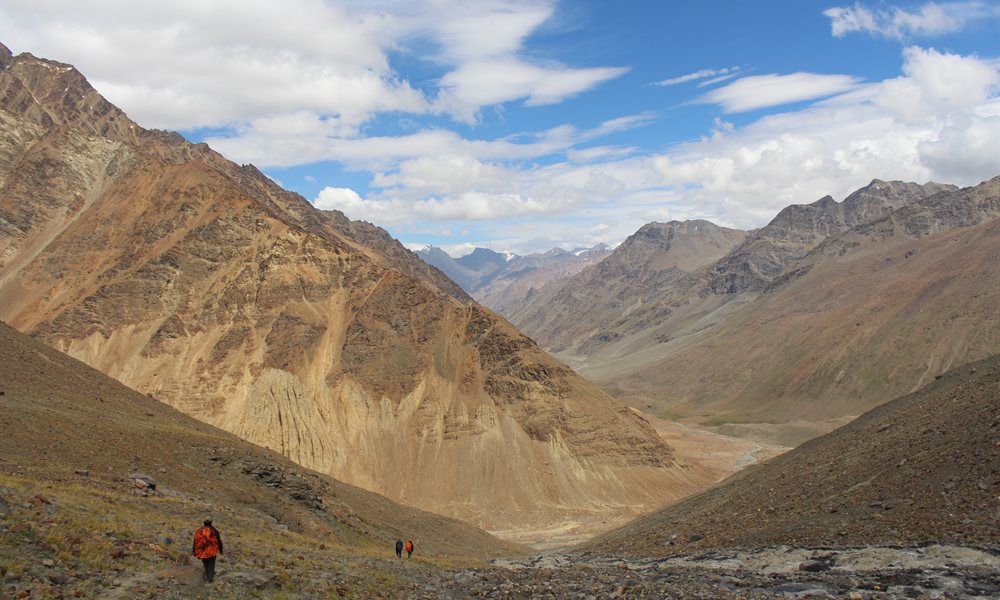 Both valleys have a different heartbeat and both are bound to leave a footprint on your heart. You’ll feel the effects long after the trek is over.

There is no time to be bored in a world as beautiful as this.