10 Mountain features that must be a part of any trekker’s vocab!

MOUNTAIN FEATURES THAT MUST BE A PART OF ANY TREKKER’S VOCAB!

While the terminology used in mountaineering is decently complex but the features that I am going to talk about are mostly the common ones. When we go to the mountains, trekking or otherwise, we are always amazed by the beauty and vastness of the mountains. Many times we find ourselves short of words to describe the beauty. Now sometimes it is genuinely because of the awesomeness but at some other times, it is also caused by lack of knowledge of the nomenclature used for the features in the mountains.

While the reason I sight above is important but not critical. The reason why knowledge of these words becomes critical is the ability to navigate and understand the trail you are following during the trek/hike. Most trekkers I encounter are not able to understand the trail, even after reading detailed blog articles or maps. Did you also feel it? Well, I did…so many times in my initial years of hiking.

So, let’s talk about some of the most commonly seen but rarely heard of features. While there are many more but as of now let’s focus on the most used ones, at least as per me

This is the feature of a mountain that most hikers walk on (most of the time actually) but rarely know that they are walking over the same. In fact, most roads cut through the spurs of mountains only. A spur is the outward projecting (bulging out)part of the mountain that usually curves away from the main body, laterally. Look at the picture below to see the same. Many of the mountain villages and towns are also situated on spurs only. For eg. The Nehru Institute of Mountaineering is situated on the Ladari spur (those who have been to NIM might have some emotions for Ladari spur

A Re-Entrant is a small valley like formation which would collect the rainwater and become the passage for it to move downhill. On the map, a Re-Entrant would appear like a U or V shape in the contour lines and pointing towards the hilltop or the top point (where the contours start converging), unlike the Spur that would again be U or V shapes sticking out of the hill. Re-entrants are also very commonly used by most trekkers while negotiating the mountains. One is more likely to find water in the rainy season but otherwise, the re-entrants are mostly dry. 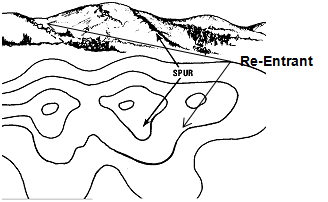 A mountain pass (also known as 'La' in many regions) is the feature that connects two valleys. Most people know this part but what most fail to realize is the actual presence of pass on the trail. While walking, one always gets confused about the actual location of a pass because, without the aerial view, it’s difficult to understand whether one is walking through a pass or any normal ridge/spur. The first thing to understand is that a pass is not like a peak and should not be thought of as a point. It’s a passage that usually has a top point, from where one can see the two valleys that the pass is connecting. See the image below, showing in Google map, The Rohtang pass. The passes are denoted by a special symbol on the maps (depicted in the image).

Now this is the feature that most of us understand but I am still including because any trekker would mostly be hiking towards/inside a valley but just like a pass, sometimes it is difficult to recognize when you are in a valley, especially to spot the difference between a small re-entrant and a valley. The image below should make it clear (correlate with that of a re-entrant). Both re-entrants and spurs, lower down and rise from a valley. The Valley is a low area of land, between hills or mountains, usually with a river or stream of water flowing through the same. A valley is also known as Doon is some of the Himalayan regions. Depicted by a pattern of a line along with 3 dots on the map, a valley is an area where one finds most hill town and even cities, Dehra-‘doon’ is an example.

The most desirable & respectable of them all: Summit, the feature that has inspired so many of us for so long. I would be ready to risk my life to climb some of them any day! Everest, K2, Kanchenjunga, and many more are not known so much of their shapes but for the altitude at which they have their summit. Defining the highest points on this Earth, the field of mountaineering has been emerging for the aspiration of a man to climb to the top of such mountains. Why I included the two here in the list because there is a slight confusion that always exists between a Summit and a Peak and mostly the two terms are used interchangeably. Well, the difference is slight, and hence the usage can be accepted.

The biggest difference is the fact that every mountain has only one summit but may have more than one peak. A Peak is a pointed top that looks like a point higher than all adjacent points. If one needs to go a significant distance downhill in order to climb the other high point visible around, then that top point is another peak. On a map with contours, a peak is represented by a full circle (small) or a dot (see image).

A Summit, on the other hand, is the highest point of a mountain. There is only one summit on each mountain and hence one would always notice that the mountaineering expeditions are defined by their Summit attempts. 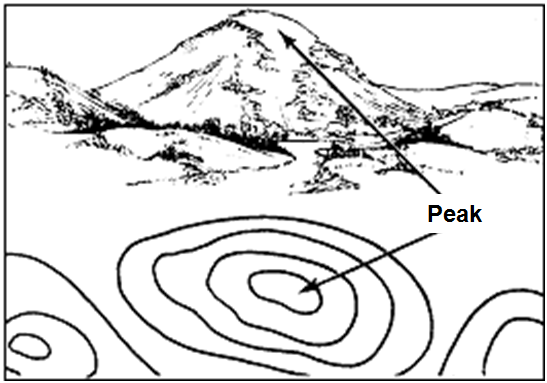 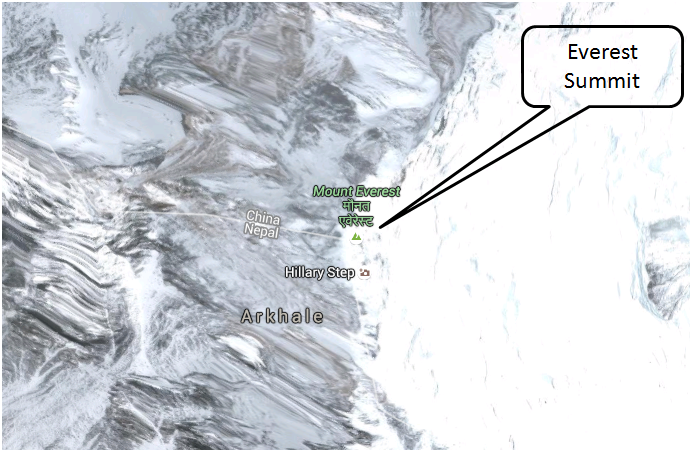 A saddle is literally that shape in the mountain that is high & broad at each end and narrower & lower in the middle. The saddle typically connects two mountains (or peaks). A Col is similar to a saddle but it always connects two peaks. Sometimes a Col is also understood as a saddle at high altitude. The image below would show how a saddle can be understood on a map. A Col is usually the more glamorous brother of a Saddle, being at high altitude and connecting some of the most famous peaks. A glorious example is South Col that connects the peaks of the highest and 4th highest mountains of the world, Mt. Everest and Mt. Lhotse. The other example is Auden's col in Uttarakhand which connects Jogin I (6465m) and Gangotri III (6580m) peaks. 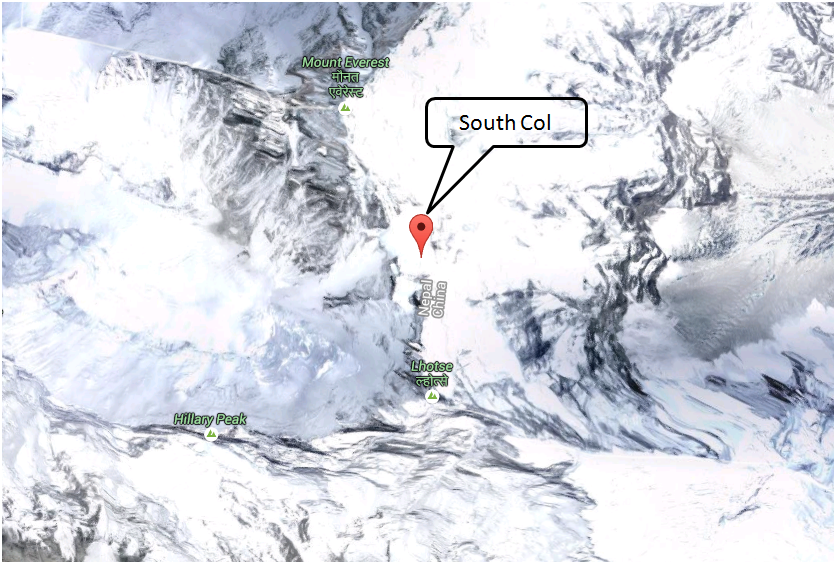 When two or more peaks are bunched together in such a way that they cannot be identified as separate mountains, the bunch is called a massif. Every massif will have a Col that joins the two peaks. There are many famous massifs in the world that are favorite spots for mountaineers. The nomenclature of peaks belonging to a massif is done usually through numeric symbols. For eg., Chaukhamba massif has four peaks named Chaukhamba I, II, III, IV. The image below shows another famous massif, Bandarpoonch, that is visible from many famous treks in the Uttarakhand region. 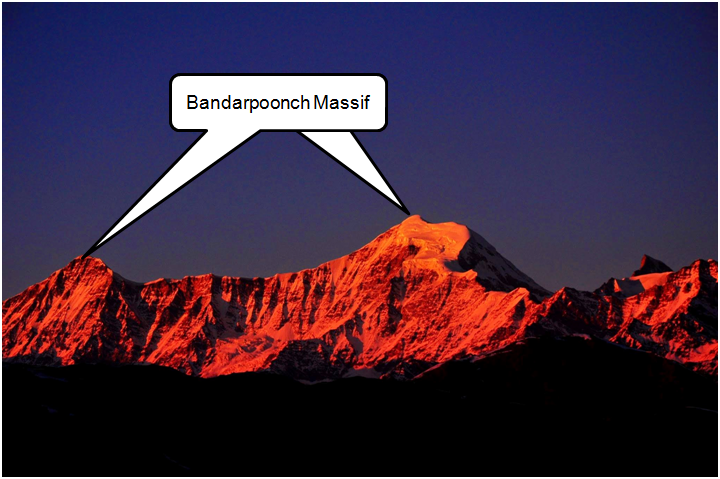 Both are a bit confusing terms that I have seen wrongly used by many. Snowline is sometimes misunderstood as the point where you find snow whereas the actual meaning of Snowline is the elevation above which snowcap is present all year. Many treks would not reach until the snowline of a mountain.

On the other hand, Treeline is defined at the elevation above which trees cannot grow. This elevation cannot be defined in terms of fixed altitude because there are other factors contributing like soil, latitude, and terrain specs.

A Verglas is another typical feature that most trekkers would see, especially during the winter treks, but rarely identify. Thin, clear ice sheet formed due to the freezing of rain or meltwater on a hard, smooth surface like rock or wood. A Verglas can be a serious mountain hazard while trekking if you are moving early morning or post-sunset. The sunshine is usually effective in removing the Verglas but sometimes they are placed in areas where sunlight is obstructed due to mountains or trees. In such cases, especially in winters, Verglas can be present even in the afternoons. One should be very careful to spot and avoid them because they are hardly distinguishable due to their clear & thin formation. One can use an Ice ax or similar hard material to puncture the Verglas before moving if it is completely unavoidable and one has to cross over the same. A not so sophisticated but effective way is to put some sand over the Verglas before stepping over. 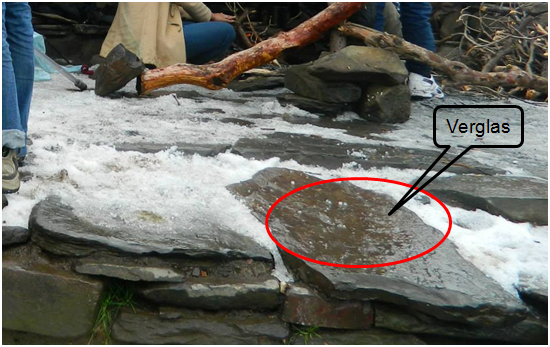 A ridge is the long narrow route typically joining mountain tops. The difference between a Col and a ridge is that a Col is a saddle-like formation on high altitude whereas a ridge is a much narrower route with a sharp fall on both sides. Most ridges should have just enough space for climbers to walk through them. See the image below to understand how a ridge looks in reality and how the same is understood in maps. An offshoot of the ridge is called Arête which is mostly a rock terminology referring to rock climbing. It’s a vertical ridge at a convex angle in a rock face that is climbed using the ‘Laybacking’ technique. 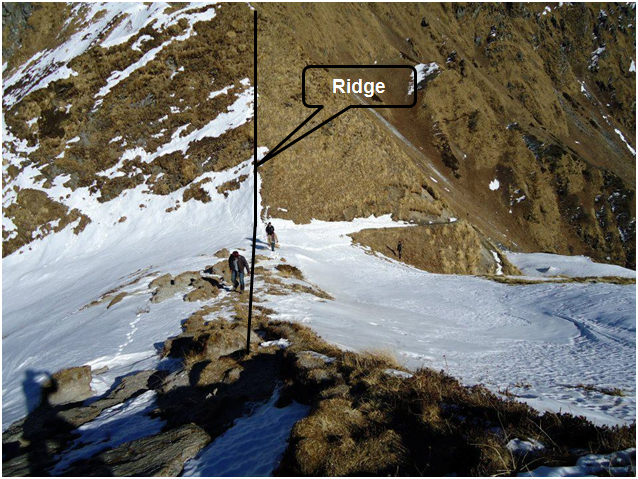 Hope the glossary above helps you not just in becoming a ‘cool’ trekker who knows the necessary lingo but also in understanding the most inspiring creations of God, mountains a little better. As mentioned in the beginning, there are many more features like Cornice, Bergschrund, crevasse, Gully, Moraine, Glacial, Ledge, etc. that I would love to discuss but I picked the above 10 to include most frequently seen features while trekking.