Himalayan Treks beyond Main Season: Insights into Adventure Travel in the Off-Season

At Bikat Adventures, we have been seeing an interesting trend in off-season trekking. More and more trekkers are opting to do Goechala, Pangarchulla and Markha Valley trails in the winters instead of the peak season.

Their choice, of course, comes as no surprise.

Off-season treks save you from disappointingly crowded trails of the peak season and offer you unique challenges in terms of weather and terrain.

If you are looking to go on a Himalayan trek this winter but want to avoid the crowds, take a look at some of these misconceptions and realities about off-season trekking in the Himalayas.

We hope it helps you decide if the winter versions of our summer hikes are indeed for you.

Let’s begin with what the term ‘off-season’ actually means.

Myth 1: Off-Season Treks are treks done in the wrong season.

Fact: Off-season is not equal to the wrong season. 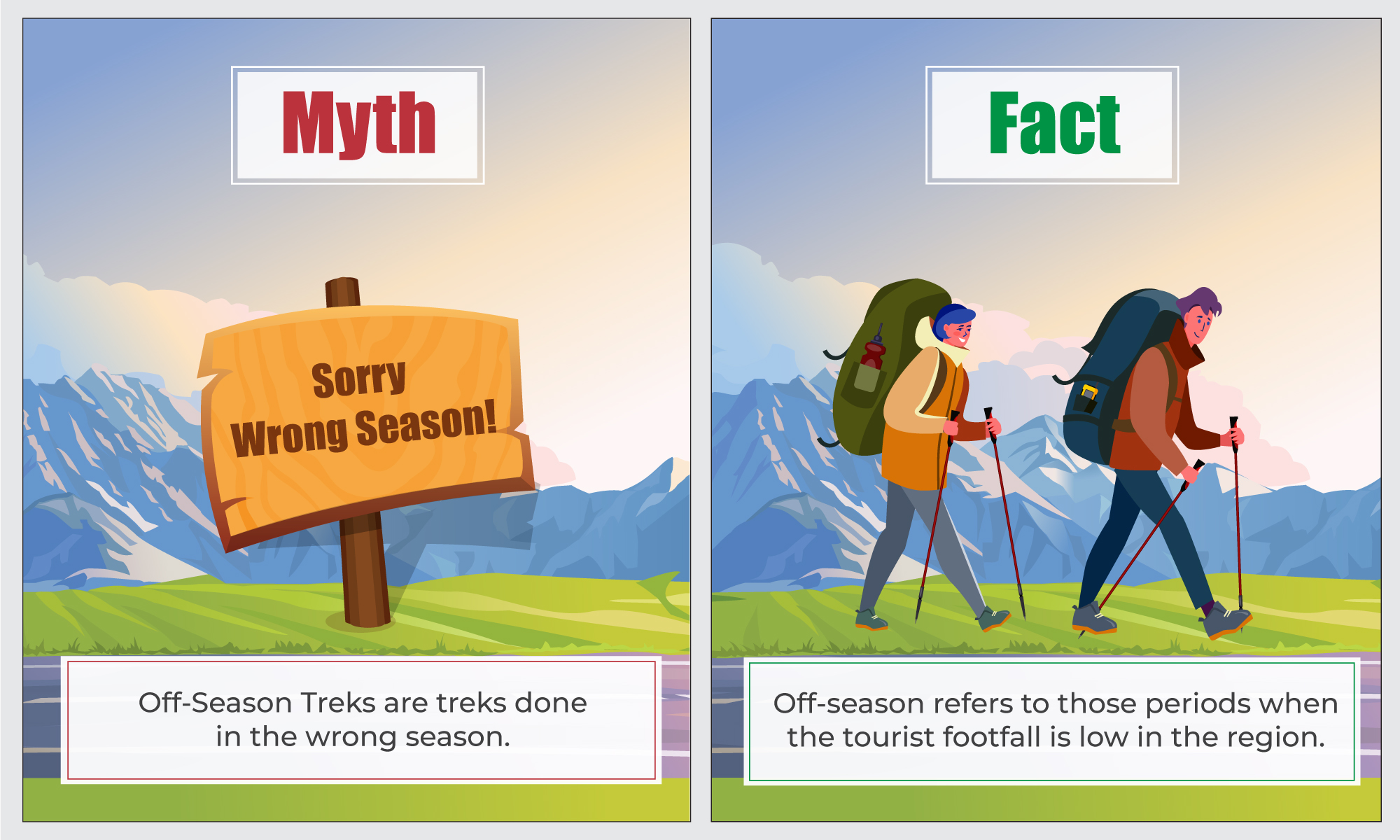 Off-season is the opposite of ‘peak season’, not ‘right season’. In fact, there is no right or wrong season for trekking.  There are only summer treks, winter treks, monsoon treks and spring treks. You choose which season is right for you based on what you are looking to get out of the trek.

When you do a quick google search of off-season trekking in Nepal, you will find that many organisations and independent travellers alike recommend doing most treks (including EBC) in the off-season. There are multiple reasons for this. The views are clearer. Crowds are lesser. Airfares are lower. Homestays have better discounts etc.

Fact: Trekking in the off-season is completely safe and is attempted worldwide. 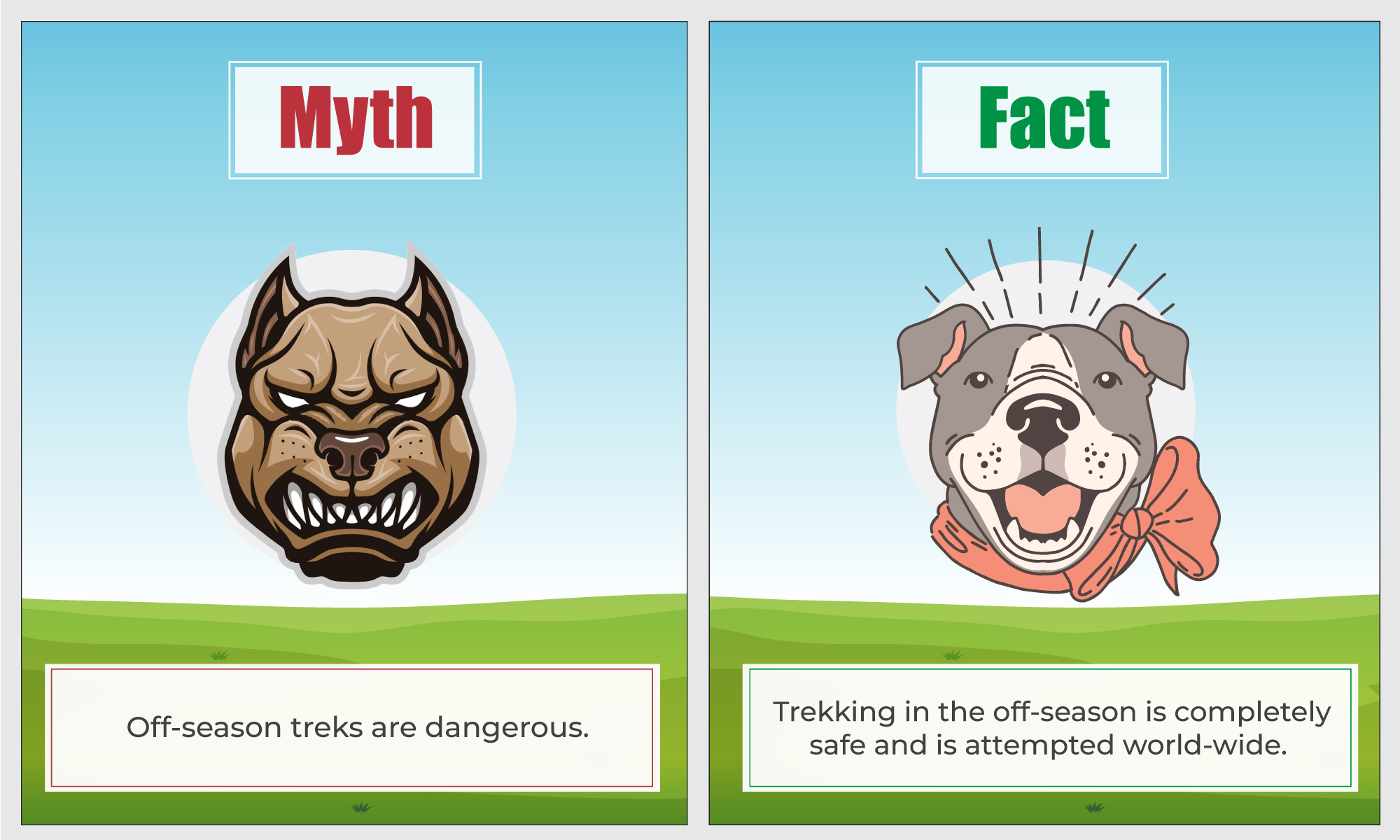 By treks, we are not only referring to the straightforward ones like Goechala and Markha Valley. We are also talking about technical expeditions to the most untamed of mountains like K2 and Mt. Everest.

In fact, in January this year, a Nepalese team of 10 mountaineers successfully hit the summit of K2 in the winters, a feat that was considered impossible before it became possible!

You will notice that the headline of the article linked above reads “Winter Ascent to the K2” and not “Off-Season Ascent to the K2”: off-season in this context is not only meaningless but also irrelevant.

Now, if we were to zoom in a little to the Indian Context, we see mountaineers attempt expeditions like Mt. Deo Tibba and Mt. Gangotri in the winters, all of which require approval from the Indian Mountaineering Foundation (IMF).

As an organization that holds numerous technical mountaineering expeditions alongside non-technical treks in India, we can assure you that there is nothing remotely unsafe about attempting summer treks like Goechala and Markha Valley in the winters.

If you have completed a trek rated BRS level 4, you are by all means eligible to attempt Goechala, Pangarchulla and Markha Valley in the winters. :)

Infact, it serves as an excellent training ground for longer and tougher expeditions like Kalindi Khal, Auden’s Col and Panpatia Col.

Myth 3: The temperatures on off-season treks are unbearable.

Fact: When summer treks are done in the winters, the temperatures are going to be relatively colder. 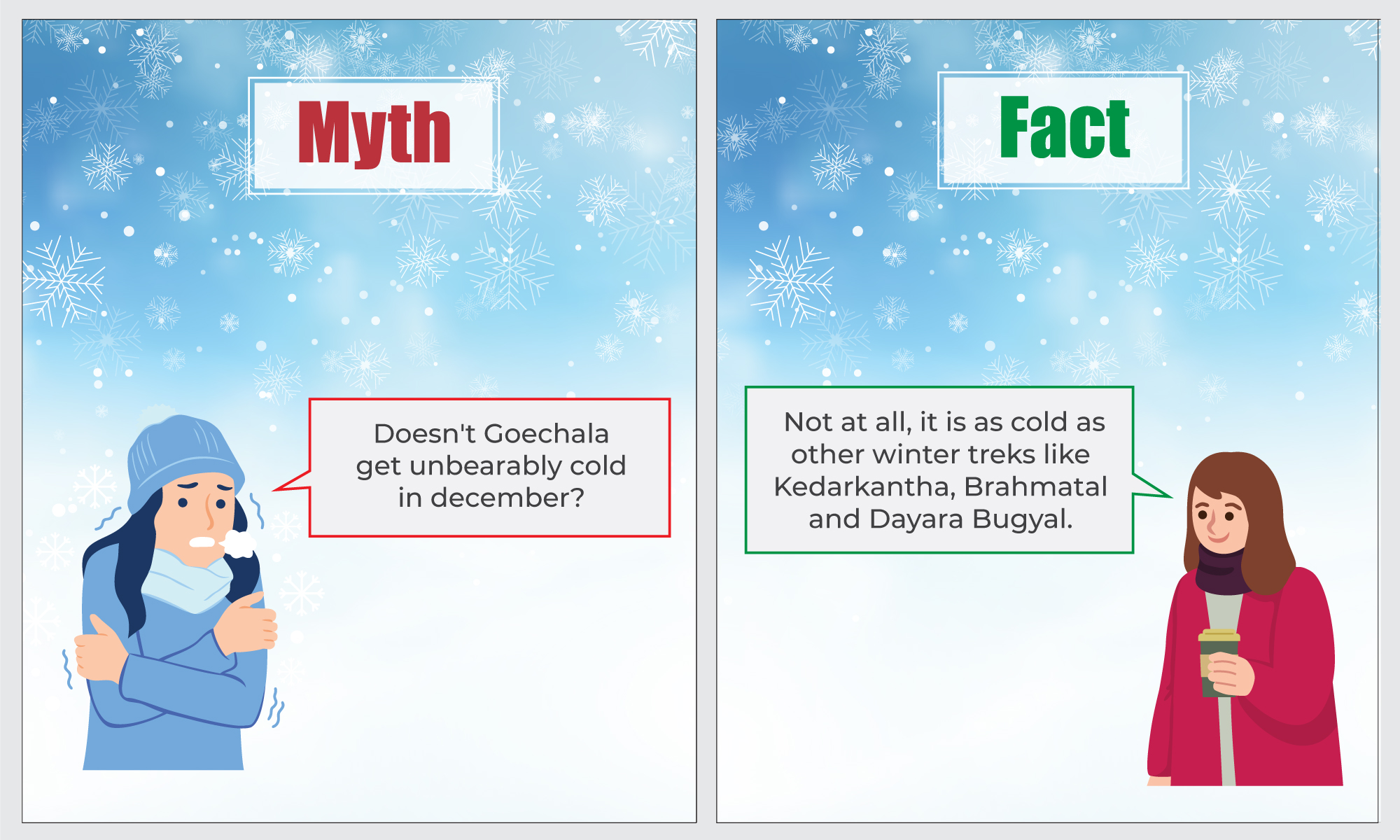 The temperature on Goechala and Pangarchulla in the winters is definitely colder than what you experience in the summers- just the way the temperature on Kedarkantha in the winters is colder than what you would experience in the summers. When this doesn’t stop you from attempting Kedarkantha, why should it stop you from attempting Goechala?

At night time, the temperature on a trail like the Goechala dips to -12  degrees in the winters- which is still warmer than what you would experience on, say the Chadar trek during peak season time.

At Bikat Adventures, we firmly believe that there is no such thing as bad weather. There is only inappropriate clothing or in the case of trekking, inappropriate layering ;)

Our Trek Leaders will guide you on how many layers to wear at each campsite. This is irrespective of which season you are attempting the trek in. As long as you pack correctly and layer appropriately, you are all set for the winter versions of our summer treks.

Myth 4: The trails are not at their best during off-season time.

Fact: The trails are the least crowded and most pristine during off-season time. If off-season also happens to coincide with winter, then you are in for a double bonanza because the views are also the clearest during this period! 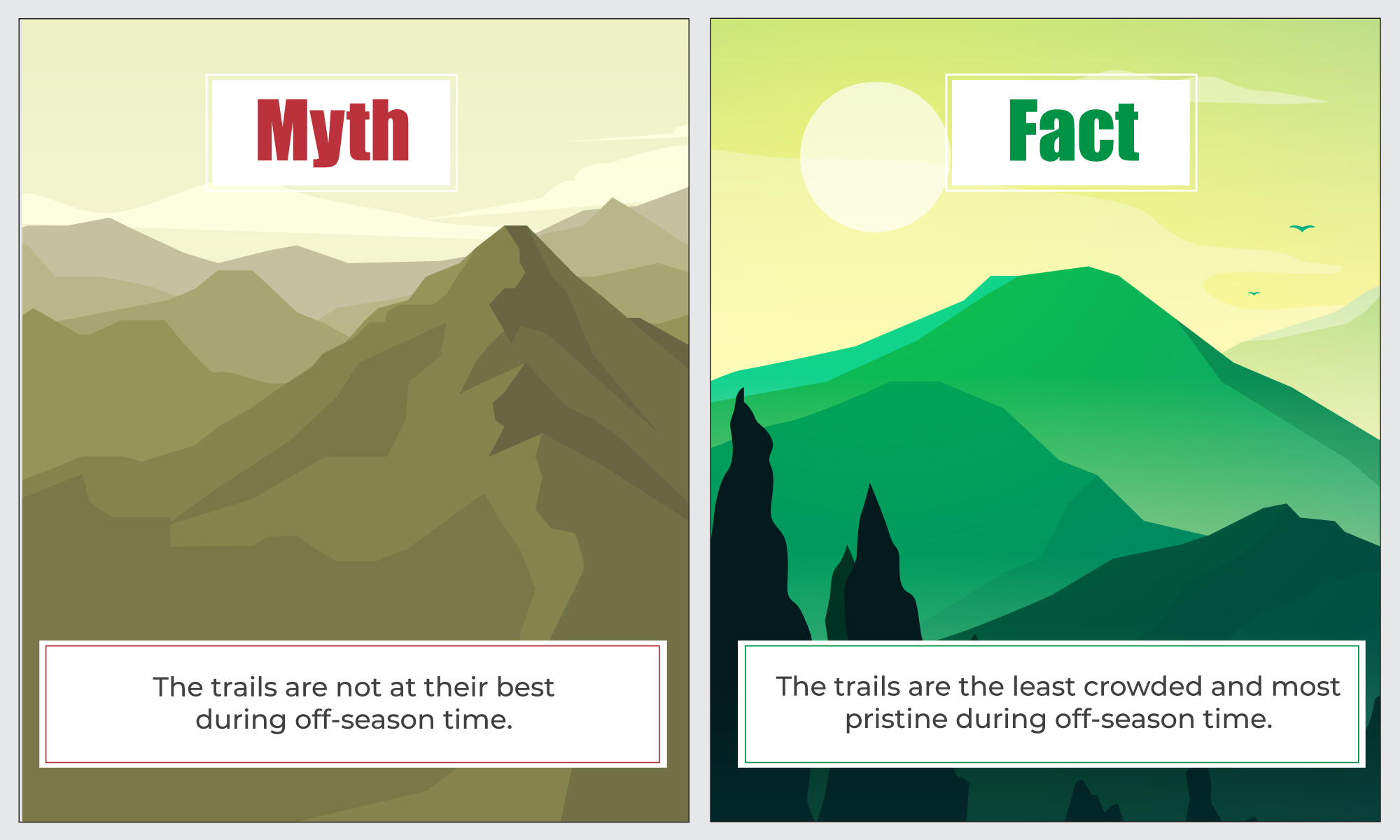 There are three amazing benefits to doing Goechala, Markha Valley, and Pangarchulla in the winters: there are fewer people on the trails, the views are clearer and it is eco-friendly.

In India, the number of trails that are operated in the winters is usually low. This means every Operator out there is focussing all of their trekkers into the popular winter treks like Kedarkantha, Brahmatal, or Dayara Bugyal. We have lost count of the number of times our trekkers have returned disappointed from these trails- it was like attending a mela in the Himalayas, they said.

Trekking Goechala, Markha Valley, and Pangarchulla in the winters won’t just be a refreshing change, but the environment would be heartily thanking you as well- for diverting crowds.

And finally, the views are the clearest during winters. This is not just in India. It is the case with trails like EBC in Nepal as well. This is a big reason why trekking in the winter is highly encouraged by both organizations and independent bloggers alike in Nepal.

The mountains don’t care about what season it is. Their beauty and grandeur remain the same every day of the year!

Myth 5: The summit rates are lower for all off-season treks.

Fact: The summit rates are lower for a few off-season treks. 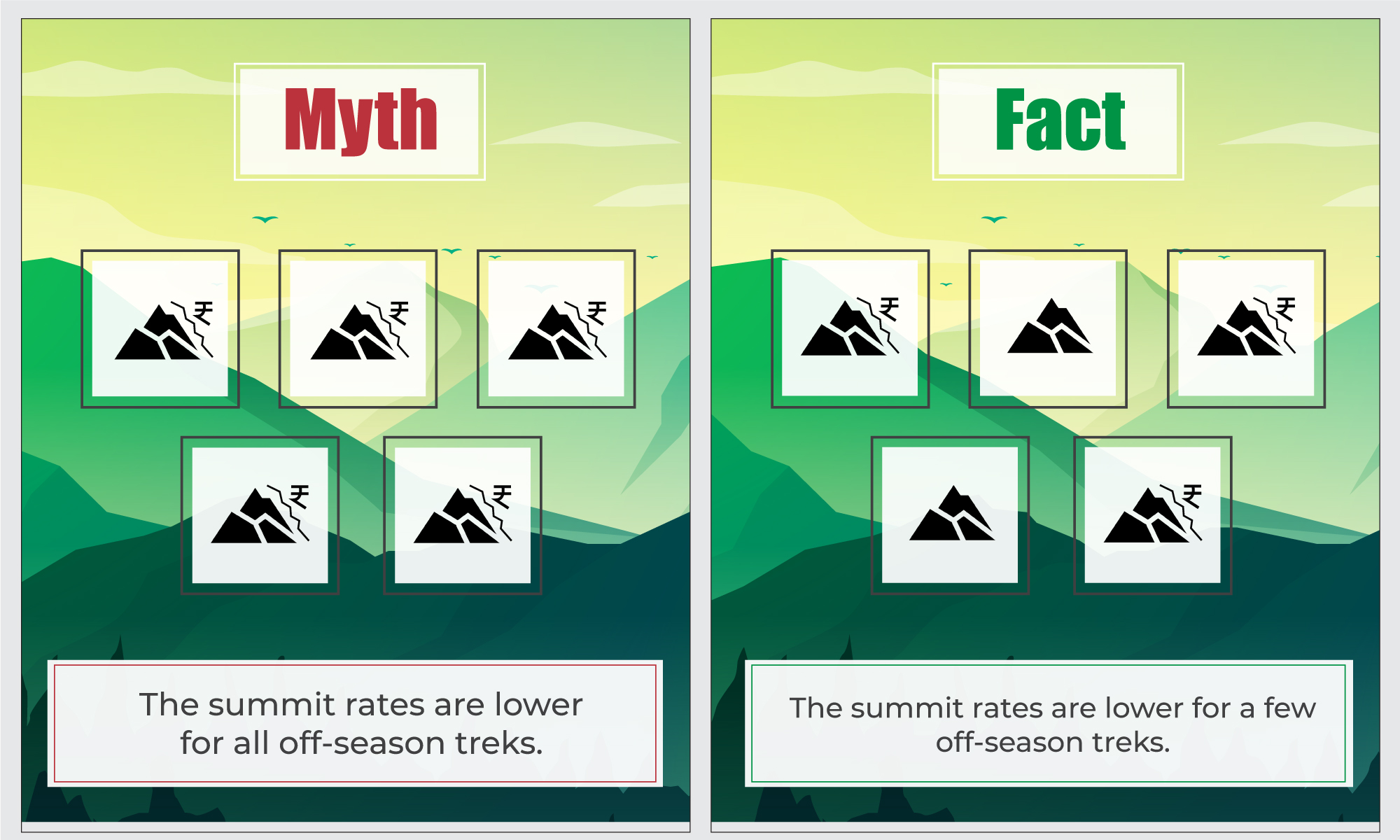 Goechala, Pangarchulla, and Markha Valley are the only treks we hold off-season out of all our itineraries.

Of the three, we have noticed that

Goechala has higher summit rates in the off-season time than the main season.

Markha Valley is relatively unaffected by the season. Homestay options are available on this trail during winters (making sure that the route is always open) and they provide good warmth, allowing for easier acclimatisation.

Pangarchulla alone experiences lower summit rates. Our past data shows that summit rates in the winters are 20-30 % lower thant the summers because the trail is more prone to weather and terrain fluctuations.

Despite this, we hold Pangarchulla off-season because of the unique terrain it offers during the winters.

We have a niche community of climbers who are constantly on the lookout for unique and tougher challenges. Attempting Pangarchulla in the winters often ranks highly on that list. This is because the terrain serves as an excellent practice ground for taking on tricky challenges.

If you have completed a BRS level 4 trek and are looking for a challenge to step up your trekking game, Pangarchulla is a great option even if you don’t reach the summit.

But if completing the trek is your priority, we recommend choosing the Goechala or Markha Valley trek.

When we first entered the industry ten years ago, we noticed that trekking was largely promoted as a leisure activity in India.

Aiming to touch greater altitudes and off-season treks were not only frowned upon, some operators even used them as tools of intimidation. Lack of safety was often cited to stop trekkers from looking beyond the limited itineraries they offered.

At Bikat Adventures, we wanted to change this. We wanted the trekking community in India to go beyond mainstream trekking- to tackle newer terrain, build better climbing skills, and progress towards technical peaks like Mt. Deo Tibba, Mt. Nun and Mt. Black Peak.

We want the community to enjoy trekking for the sport that it is, a sport to test our limits, push us out of our comfort zones, to learn from, explore and grow as individuals.

Attempting some of the summer treks during winters does exactly that – but on a smaller scale. It tests our mental and physical endurance in compelling ways and prepares trekkers better for technical expeditions that rank higher up on the BRS scale (BRS 6, BRS 7, and BRS 8).

With a trained team and a right climbing attitude to back you, no season is unsafe, no altitude unattainable and no feat unconquerable.

We wish you the happiest and the most splendid of trekking journeys this year and hope to see you venturing into some of our winter expeditions of summer hikes :)