Wildlife you stumble across while trekking in Ladakh

The mountains are full of mysteries and surprises. Take a walk in the wilderness and you’ll stumble across curious little creatures living and breathing in the same space as you. Although Ladakh is a cold and arid region, you are bound to find wildlife that have adapted to the rocky terrain and harsh weather.  But if you look at them, they look like such gentle and delicate souls.

Let's see if you come across any of these beautiful creatures during the Markha Valley trek or Stok Kangri expedition. It’s a completely different feeling to spot them in the wild, their natural habitat, their home rather than admiring them during a safari or a national park visit. 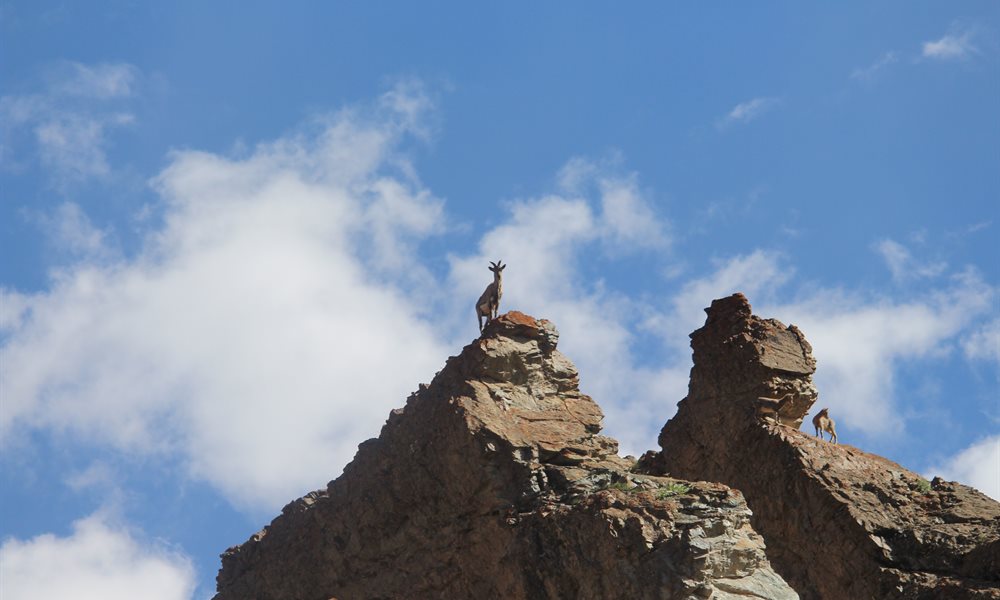 You’ll see plenty of blue sheep in the region. If you’ve camped next to a water stream, sometimes you’ll see them next to your campsite, as they come down from the hills in search for water. You’ll never see one bharal wandering around alone, they always roam around in herds. However, you may find the alpha separating from the group, and trying to find the trail, so the group can follow it. Since these guys live in rocky terrains without proper shelter or cover, their best defense is their camouflaging ability. You really have to look hard at the rocks to find movement and spot these little guys. Also, unlike their name, they are neither blue nor sheep. The origin of the ‘blue sheep’ name is unknown, and if anyone tells you that they have blue eyes, or once a year their tail turns blue, or they have a hint of blue in their coat, don’t believe them.

We came across a huge herd next to our campsite at Mankarmo during our Stok Kangri expedition and even in Yurutse during our Markha Valley trek. 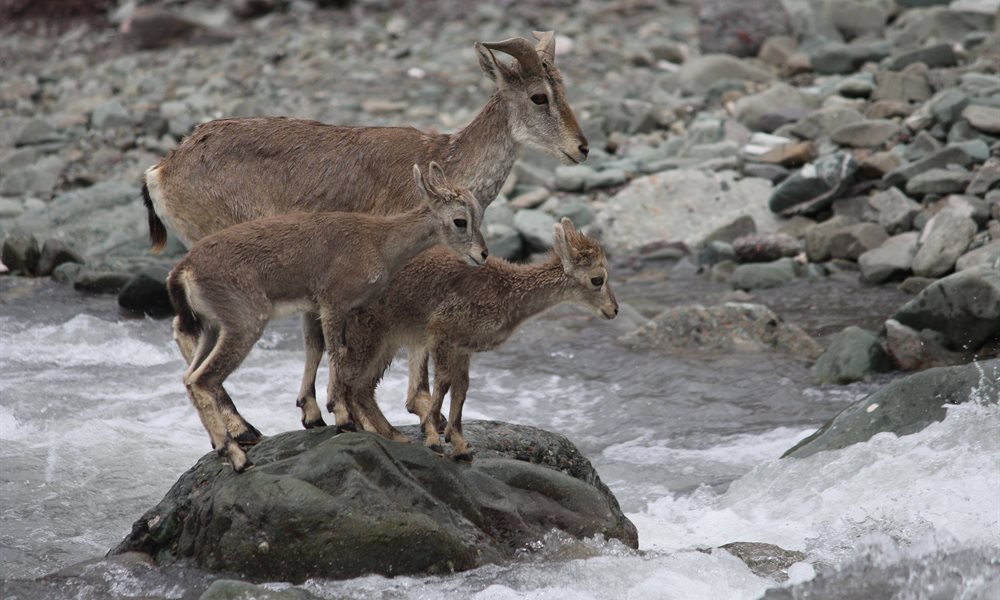 Marmots make an appearance when it’s nice and sunny outside. That’s when they come out of their burrows and kinda…sunbathe on the rocks. It’s really fun to watch them actually. At first I thought they were meerkats, but they are obviously too chubby and lazy to be meerkats.

They are active during summers, feeding on juicy grass shoots, but during winters they hibernate for a few months. The hibernation burrows are especially deep, sometime even 10 meters deep, which they share with other marmot families. 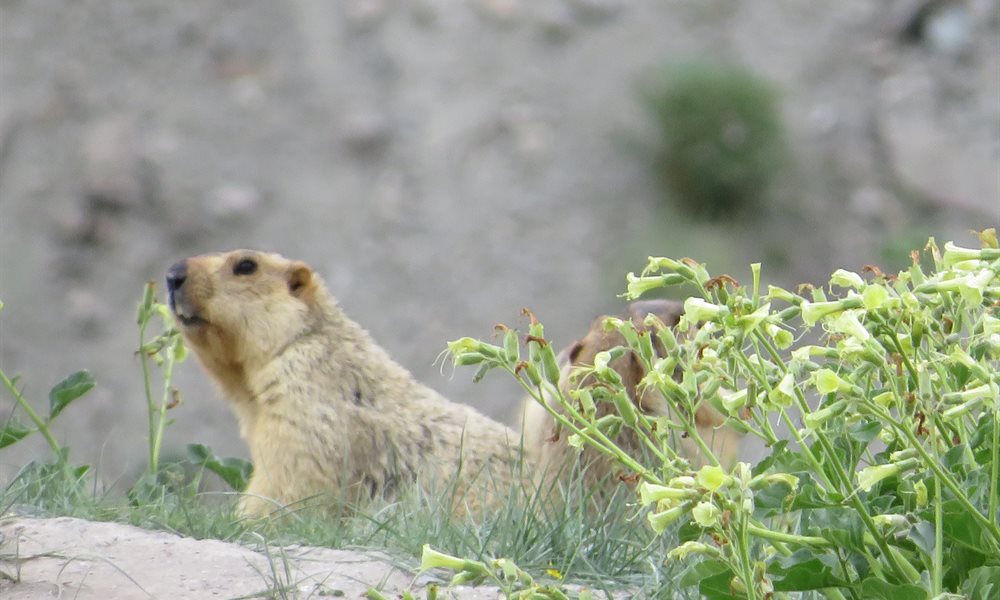 I am not a big fan of rats, but I love them Pikas, only because they whistle at you and are the most adorable cute little creatures on earth. You will only find them in the northern Himalayas, even some Tibetan region and in the Mount Everest area, so they are quite special. They stay in high altitude regions, and although are shy and stay away from humans, they could make an appearance in your tent looking for food (true story).

They are absolutely harmless, and run about in the valleys, mostly before Nimaling campsite on the Markha Valley trek and between Mankarmo and Stok Kangri basecamp. 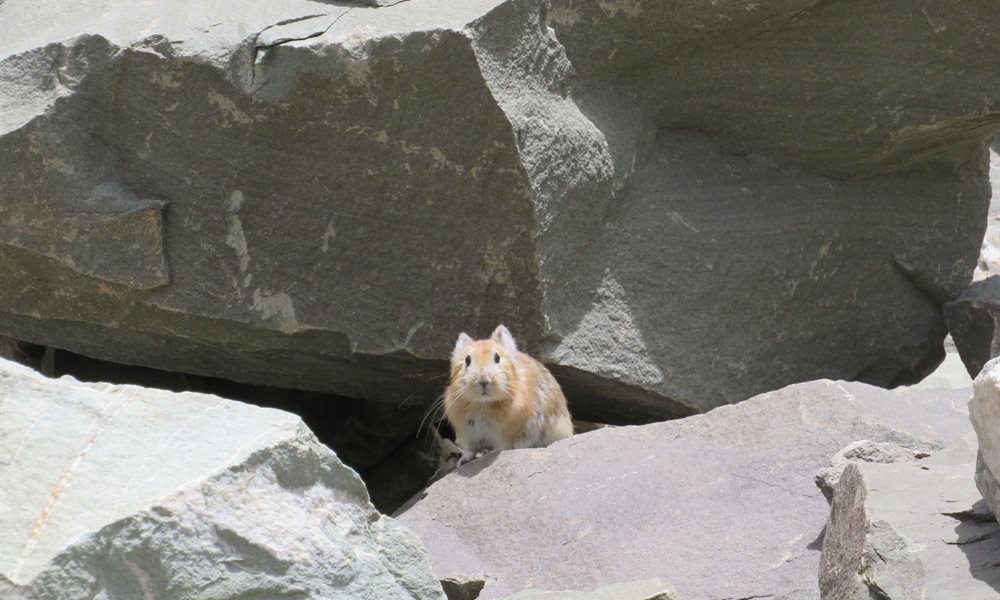 4. The symbol of love; Chukar:

Yup, these humble birds are the national birds of Pakistan and Iraq, and you’ll find them in small flocks almost everywhere in Ladakh. Of course, these birds prefer uninhabited rocky regions and are quite shy. Sometimes it’s almost impossible to spot them as well, due to their camouflaging qualities.

There are several myths about Chukar. They say in some regions in India and Pakistan, Chukar symbolizes intense and unrequited love. According to Indian mythology, Chukars are said to be in love with the moon and gaze at it constantly. 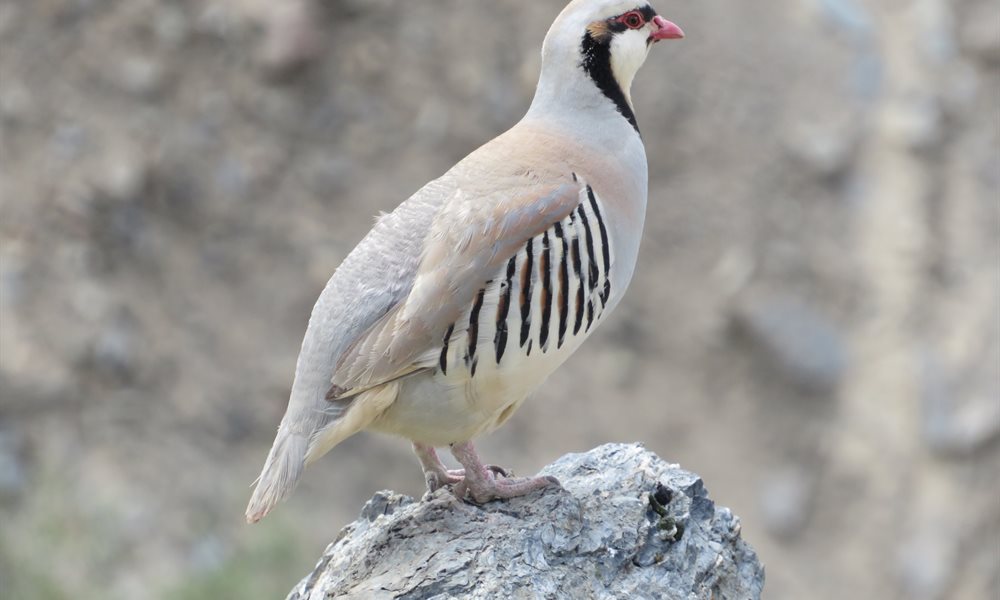 They of course belong to the crow family, and have yellow beaks, black body, red legs. You’ll find them in huge groups hovering over you as you walk towards Ganda-la on the Markha Valley trek, but even if they are flying to close to you, don’t worry they are completely harmless. They usually lay their eggs in extremely high rocky and inaccessible areas and their biggest predators are the golden eagles found in this region.

You’ll also find them at Stok Kangri basecamp, stealing food from outside the kitchen tents. 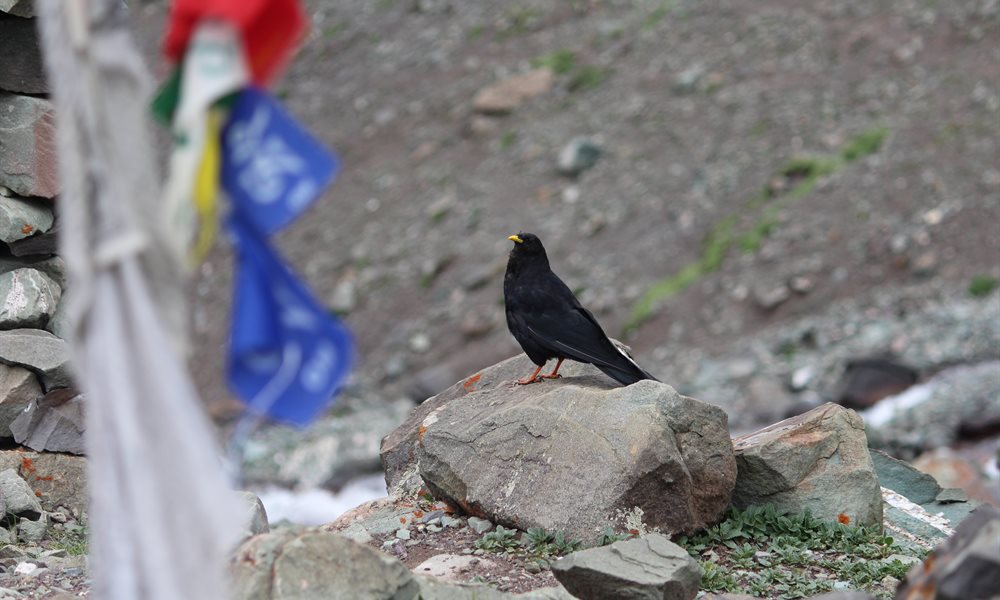 6. And lastly, the well-known Yaks.

Yaks are one of the most useful creatures in this region. Although Yaks are usually tamed and used to carry ration from one village to the other in the North and Northeastern part of India, I personally did not see them carrying load in Ladakh. I saw them grazing in the wild and through a chat with local shepherds and our local guides, I found out how Yaks are quite important for Ladakhis to be self-sustainable. Yak herders collect Yaks from different owners and take them to grazing ground, where they live with families and make butter and cheese from Yak milk. Yak wool keeps you extremely warm, and so it’s also used to make warm winter clothes all over Ladakh.

Well of course this is not it. There are so many other animals that make the mountains in Ladakh their home, if you are lucky, they will make an appearance while your time in here.