To make up for not being able to travel to the mountains, we have put together some stories of adventures we have had in the mountains that could transport you straight to the mountains. While it may not be the same as being there in person, we hope these reads take you close enough :)

This is Part 2 of the series. You can find Part 1 here.

“With each day, the landscapes shifted rapidly. The trail ran through Passes, named and unnamed, villages occupied and abandoned and paths known and unknown. Soon many a step was lost in miles and many a day in weeks.

Ladakh saw them cross seven passes over 5000 metres with gusto. In Himachal, they decided to step up the challenge by trekking in the night. Uttarakhand, on the other hand, decided to test them in the most gruelling way possible.

Not only did they have to survive a snow storm atop a frigid mountain pass but they also had to figure out a way to melt snow into water without using fuel.” 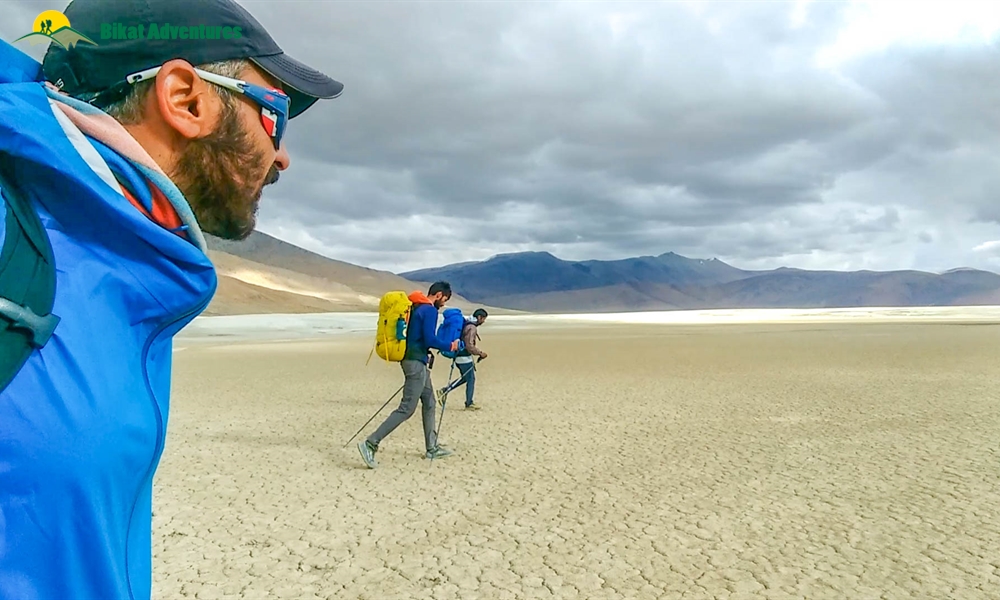 Pranav, Shikhar and Bharath get caught in a stubborn snowstorm on one of the most formidable Passes of the Garhwal Himalayas. What’s worse? They do not have enough fuel to melt snow into water. This story is about how these three resilient mountaineers survive the snowstorm by finding a way to harvest water without using fuel from their campsite set atop a frozen mountain pass at 5,950 M.

2. Climbing Mountains with our Eyes Closed

“As we climbed, we audio-described the surroundings in a kind of story.

‘There is an old brick temple to your left with patches of moss growing on it and rust-colored geckos running off to hide.’

For fun, Afsal, one of the partially-sighted candidates, decided it was time the sighted volunteers’ be guided instead of the other way around. So we closed our eyes, and he taught us how to use the cane to anticipate steps. My ears and feet became my best friends, as I heeded his instructions on where to take my next step...” 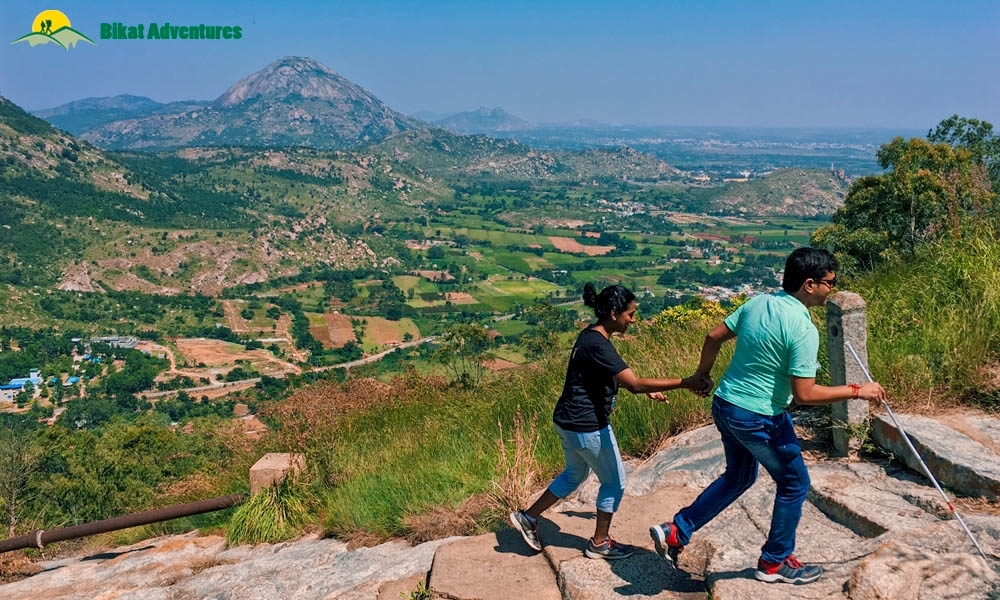 One of the major pillars Bikat Adventures draws its identity from, amongst growth, learning and environmentalism, is inclusion. This, in an industry like adventure tourism, is seriously lacking. In 2018, we met with a Bangalore based non-profit called EnAble India that has dedicated the past 20 years to removing cultural stigma around disabilities and advocating for inclusive hiring practices. Together, we made a plan to climb a mountain in Bangalore. The team? A mixture of visually impaired adventurers, some with physical disabilities, one hearing impaired trekker, our wonderful EnAble India liaison, Kaavya and our trek leader Shreyas.

3. Rainbows and Near Death Experiences: Miyar Valley to Kang La

“But we still had to cross the enormous crevasse directly in front of us, or forfeit crossing the pass and risk still being on the glacier after sundown. The thing looked absolutely terrifying- jagged ice spikes protruded from every direction, it looked impossibly wide and you couldn’t see the bottom- it just descended into black.

There’s no way we’re crossing that. The guys begin hacking shallow footholds into the near-vertical incline on the other side with their ice axes.

Okay so we are crossing that. Lovely.

One by one, they leap across this jagged, gaping plunge into God-knows-where and scramble up the other side. My turn…

Our guide holds out his hand and assures me it’ll be fine if I go for it. I look at the discouragingly-shallow foothold waiting for me on the other side, and go. My foot slides into the hold, and then slips right back out. I start to fall and our guide starts to fall too…” 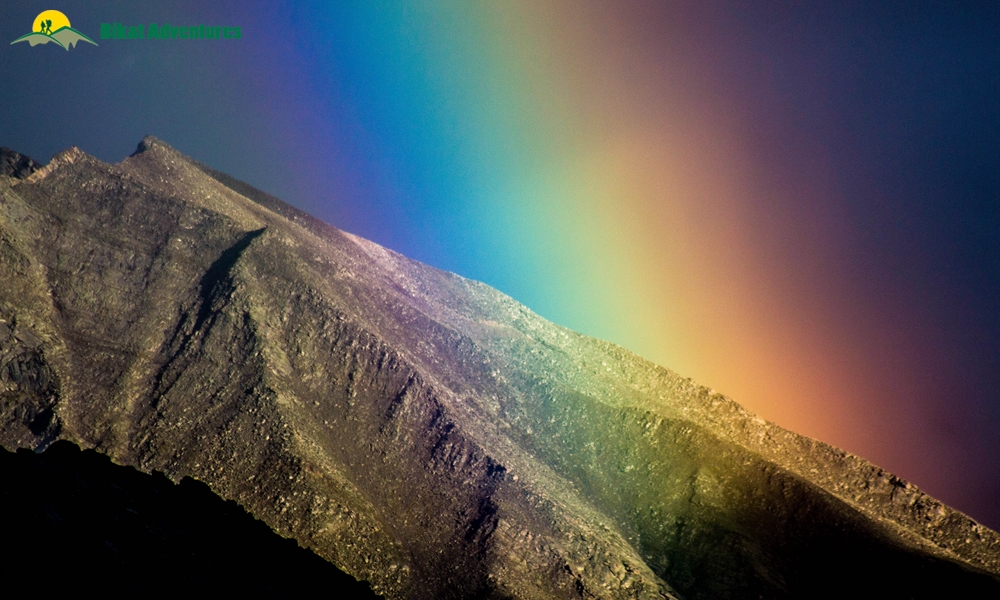 Written jointly by the members of our Exploration Team, this blog is an engaging account of our adventure through the Miyar Valley and Kang La, an 18,000ft glaciated pass connecting the states of Himachal Pradesh and Jammu & Kashmir.

4. A sea among mountains: Cycling from Leh to Tso Moriri

“The fresh tarmac slowly changes to broken tarmac to gravel and finally, after about 10 km from Hymia, to a thick carpet of broken rocks over what must once have been a road. We progress at sloth-pace for the next few hours and have only covered another 15 km in the next three hours. The sun will set soon, and the next place with a homestay is Kesar, another 20 km on terrible roads, and 15 km short of Chumathang. We start waving down army trucks without luck. Just as we’ve resigned ourselves to another late evening, a pickup truck stops for us…” 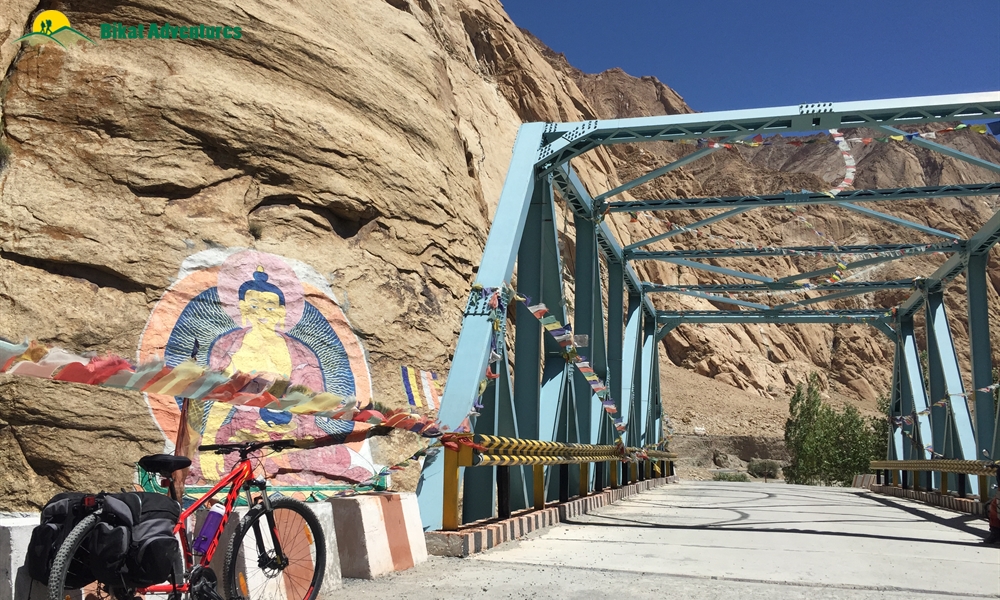 In this article, Sarthak Madan narrates candidly his entire experience of cycling from Leh to Tso Moriri with Rohit.

“We descend to another grassy field next to the lateral moraine that serves as the base camp for the Gangotri peaks, before climbing back up the moraine. All around us, huge glacial walls rise hundreds of feet, spitting rock and ice into the depths of glacier below. This is truly harsh alpine territory. After walking along the bank of Sukha Tal and climbing along a ridge on the lateral moraine for a couple of hours, we reach the campsite that serves as base camp for the Col. With the sky still overcast, we gloomily slink away into our tents, unsure the weather will allow us the pass crossing the next day.

Our fourth cup of chai that evening is punctuated by voices claiming the weather has cleared. I grab the camera and rush outside to see the last of the sun’s rays illuminating the highest reaches of Jogin’s ridges. I turn around to see the Col, finally free of clouds and almost within reach. Equipment is distributed and plans are made for a 3 am start. But, there is the plan and then there is what actually happens.” 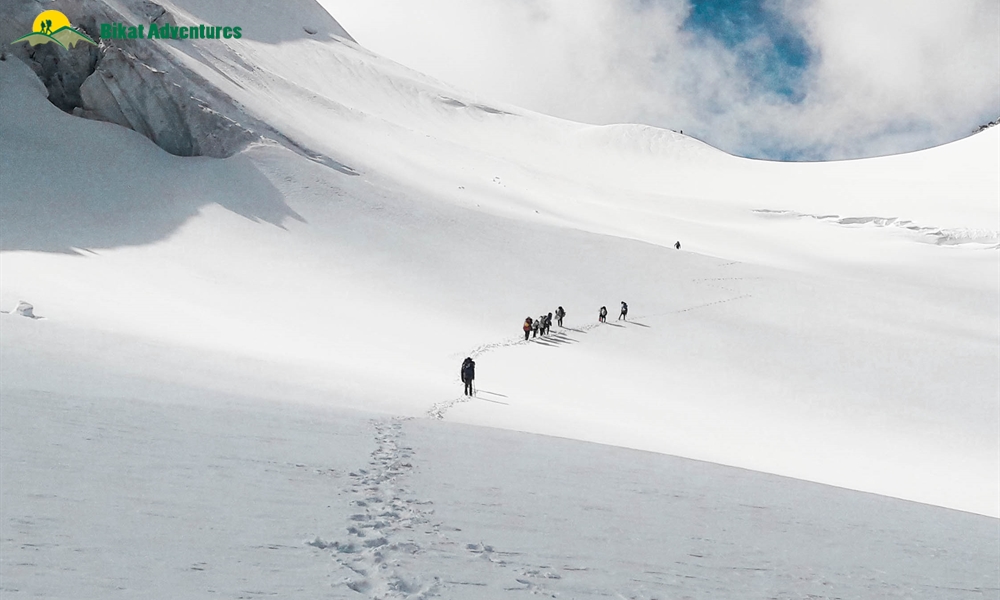 Travel refuses to stick to an itinerary or a plan no matter how meticulously they are made. Our expedition from Gangotri to Kedarnath via Audens Col and Mayali Pass was no different. Read along to find out how our journey eventually panned out.

“ On the final day of our trek, I got the chance to ask our wonderful local guides, Jairam (who has been guiding trekkers for 14 years) and Deepak (who has for 10 years) to let me in on the secrets about this place. And so, sitting under the shadows of the Rupin Pass that we had conquered a day before, they told me:

Whether they're true or not is for you to judge. Frankly, I could not decide…” 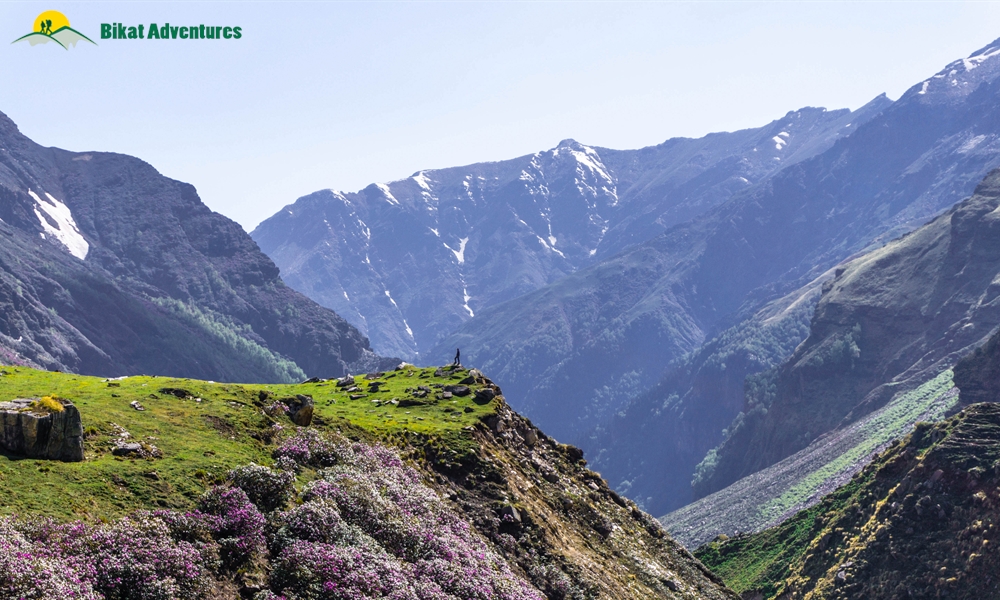 How could a reading list be complete without some legends and local stories from the mountains? In this article we bring you some intriguing tales from a trail spun between two states, The Rupin Pass.

7. Gangotri III: A Lesson in Climbing

“Much to everyone's dejection the weather turned worse today. It started snowing heavily at 5 a.m in the morning. By 8 a.m that day, this snowfall had turned to rainfall and had begun lashing at the slopes unceasingly.

A dense, impenetrable cloud of gloom had settled over the campsite.

For the first time, one of our participants suggested we turn back and quit altogether…” 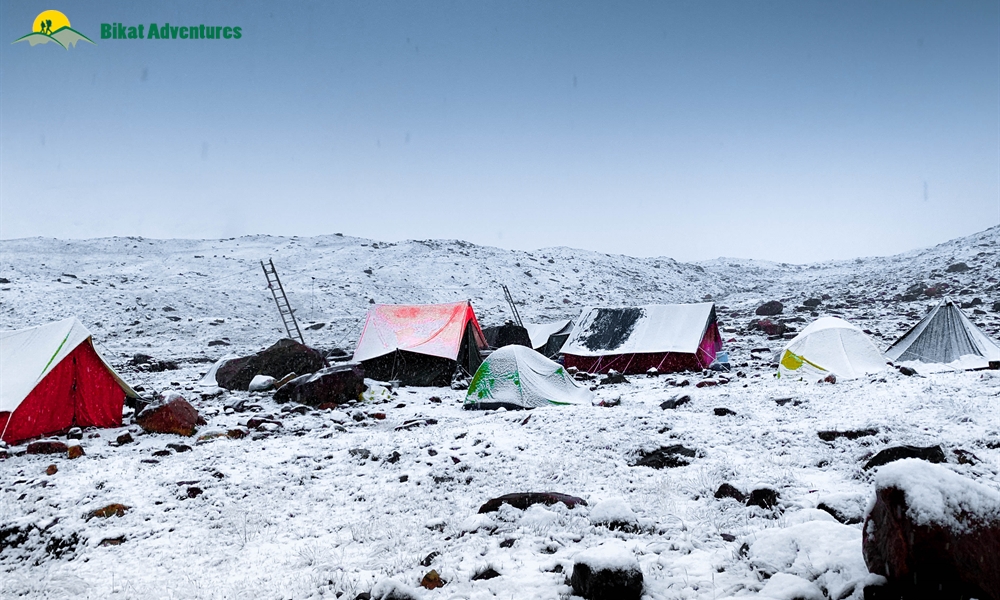 With rains and snow shrouding the slopes for over three days now, our expedition team attempting the summit of Mt. Gangotri III decided to turn back. Around the same time, another team from a different trekking group that was attempting summit alongside us chose to stay behind.

This story is about a series of unforeseen events that unfolded afterwards.

It is not about right or wrong decisions because there were none in this scenario. Instead, it is about a lesson we learnt in retrospect, a general rule of thumb a trekker/mountaineer could keep in mind when heading into the mountains.

“No matter how you spell it, twenty thousand, five hundred and five feet is a massive number. Heck, it takes six whole seconds to say, and a whole lot longer to climb. Even 20,505ft looks big, but nothing can compare to how huge the peak looked the first time we saw it in person. But I’m getting ahead of myself.

This adventure start in Leh. And if you think about it, most adventure is actually not all that engaging. A lot of it is just waiting for things to come together. A lot, a lot. The weather, the equipment, the people. That’s what we did for the next two days. Or three. It’s easy to lose track of time while waiting...” 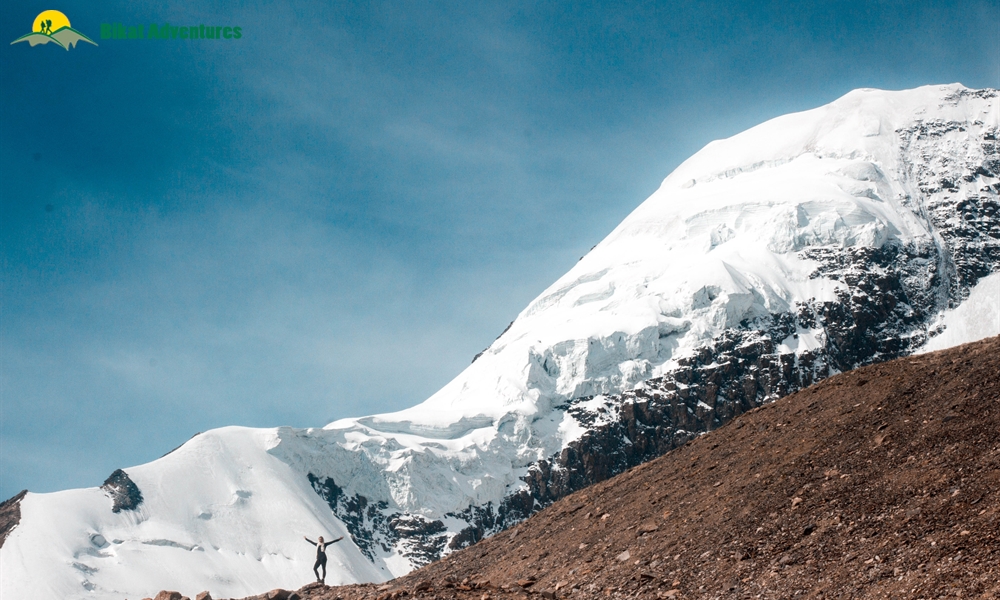 This is the story of our exploratory trip to the Throne of Markha Valley. Originally the plan was to summit both, Kang Yatse I and II, but you know how plans go: there’s what you say you are going to do and then there is what actually happens.

We hope you enjoyed reading through our collection. What were some of your favourite parts from these stories? Let us know in the comments below.