How do Trekkers feel about traveling after the lockdown?

Last month, when the states in India had not yet opened their borders to tourism, Bikat Adventures conducted a short survey to get a basic idea of how trekkers feel about traveling after the lockdown.

We ran the survey for a week from the 17th of June to the 23rd of June. A total of 767 trekkers participated in the survey during this time. The responses we received were overwhelming, to say the least.

Other than choosing the options already present, a majority of the trekkers also took the time out to add generous doses of explanations and suggestions to each question. We went through every single one of them and have compiled the results of the survey below.

Some Key Points from the Survey

2. On Aspects of Travel that Trekkers found Worrisome:

The total number of active Covid-19 cases in the place they are traveling to ranked the highest followed by using local transport to get to the base camp.

3. On Aspects of Trekking that Trekkers found Worrisome:

Sharing tents at campsites ranked the highest followed closely by the fear of being a potential carrier to the local population.

In keeping with the above trend, precautions like allotting each trekker their own sleeping bag, tent and liner at the beginning of a trek and making single tent accommodations available at minimal added costs figured the highest.

A little more than half of the respondents were okay with our current group sizes of 15 or less. The rest preferred to trek in smaller group sizes at additional costs.

6. On Customisation of Treks

The votes were split almost equally here with half of the respondents saying they would opt for customisation and the other half opting to skip it.

48.1 % of the trekkers said they would do a week long trek in the Himalayas when tourism resumes.

17.9% chose a shorter weekend trek in the Himalayas and 14.6% of the trekkers wanted to embark on one of our longer expeditions.

Among the Himalayan States/UTs, Uttarakhand and Himachal Pradesh are highly preferred as travel destinations followed by Ladakh.

How willing are Trekkers to travel when Tourism Resumes? 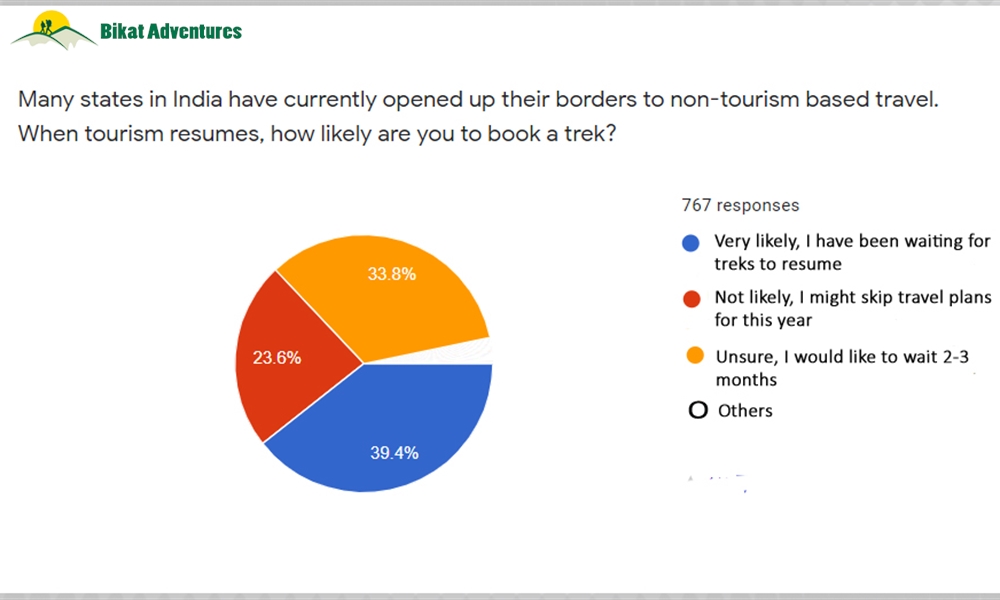 Of the 767 trekkers who participated in the survey,

- 39.4 % of them said they are likely to travel once tourism resumes in India.

- 33.8 % of them said they would wait two or three months before deciding

- 23.6 % of the trekkers planned on skipping travel plans for the rest of this year.

Of these, some said they are likely to start traveling when the number of Covid-19 cases comes down.

A couple of others felt safe traveling only after a Covid-19 vaccine was found.

What aspects of Travel do Trekkers find worrisome? 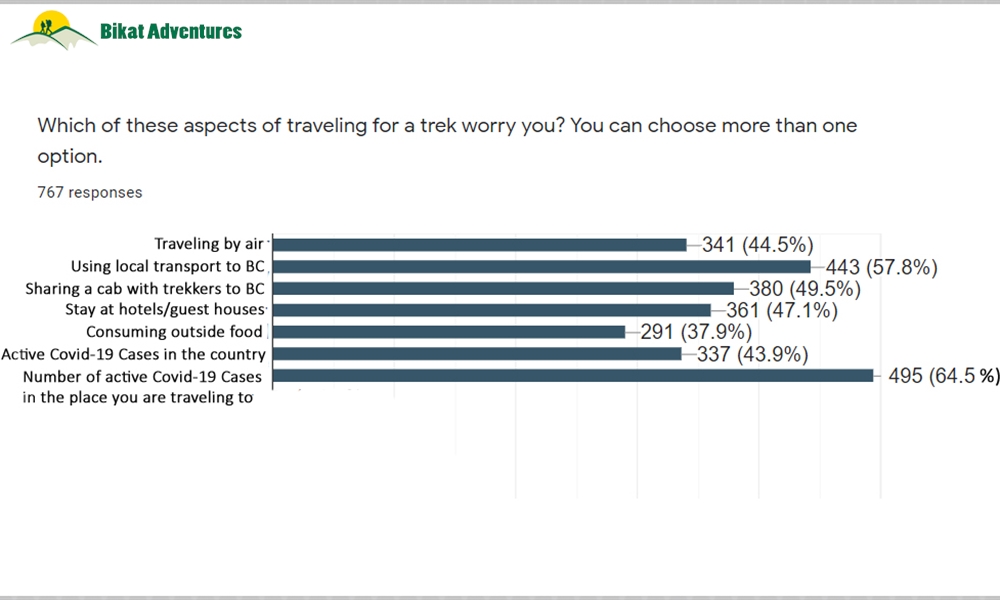 What aspects of Trekking do Trekkers find worrisome? 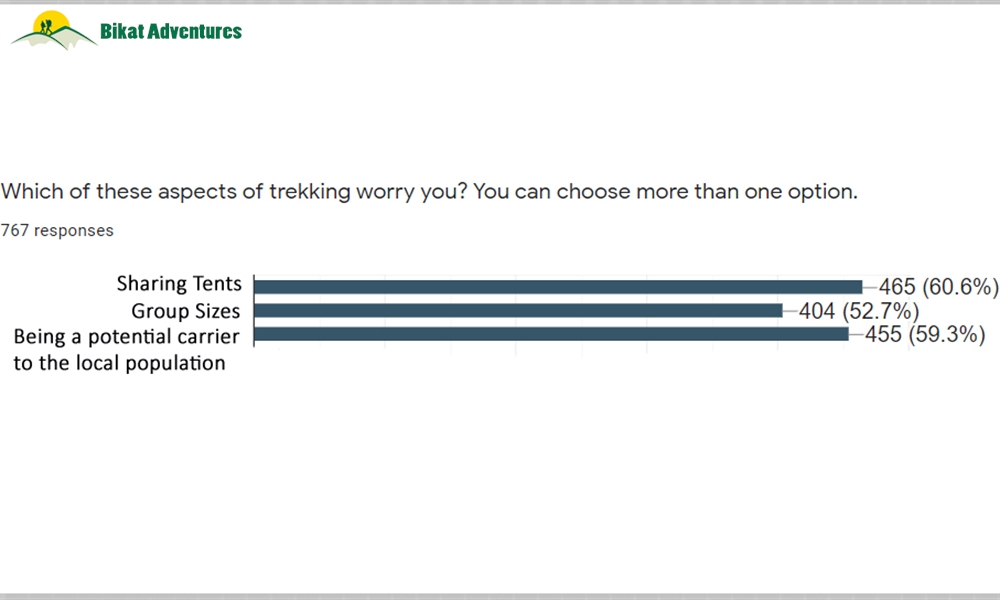 Some of the aspects that were listed under this option are as follows: 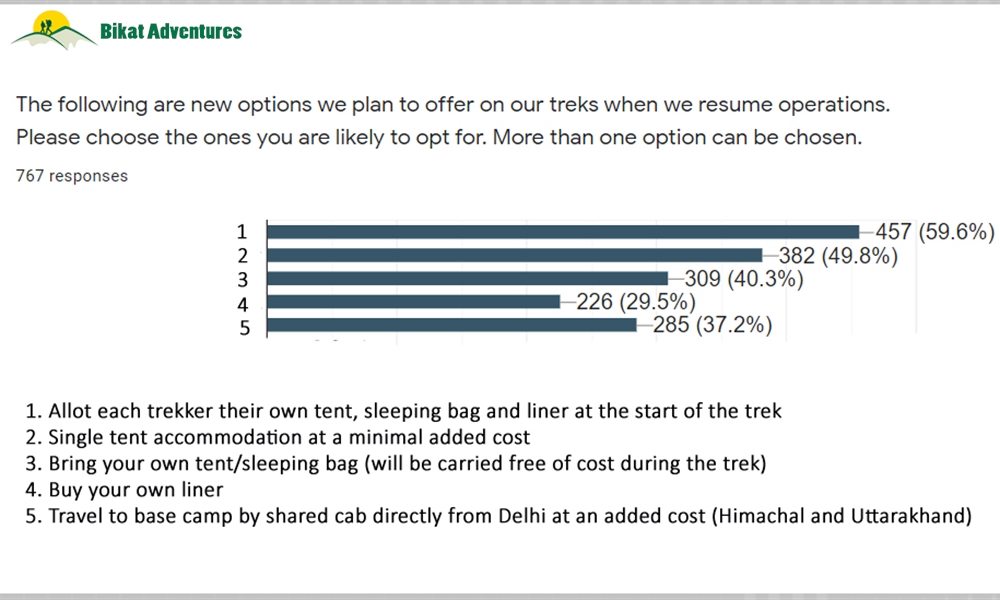 - Testing people on arrival for Covid-19

- Traveling by own vehicle to the base camp

- Using masks and sanitizers on the trek

Based on the inputs received, we have compiled a complete list of the precautions we will be introducing on the trails here.

What Group Size is most Preferred? 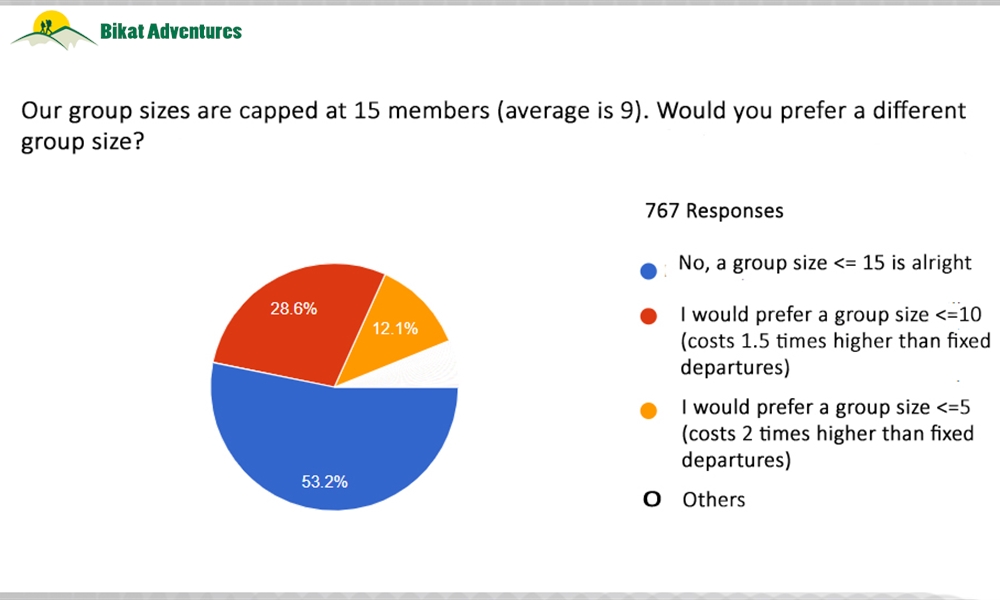 A little more than half of the respondents (53.2 %) were okay with our current group sizes of 15 or less.

28.6 % of the trekkers preferred a group size of 10 or less that would cost 1.5 times higher than fixed departures.

12.1 % of the trekkers preferred a group size of less than 5 that would cost 2 times higher than fixed departures.

6.1 % of the trekkers chose the 'Others' option. Under this finance, once again, became a constraint. While some of the trekkers wanted to trek in smaller groups, they felt the extra added cost would deter them from opting for the same.

How likely are Trekkers to opt for Customised Batches? 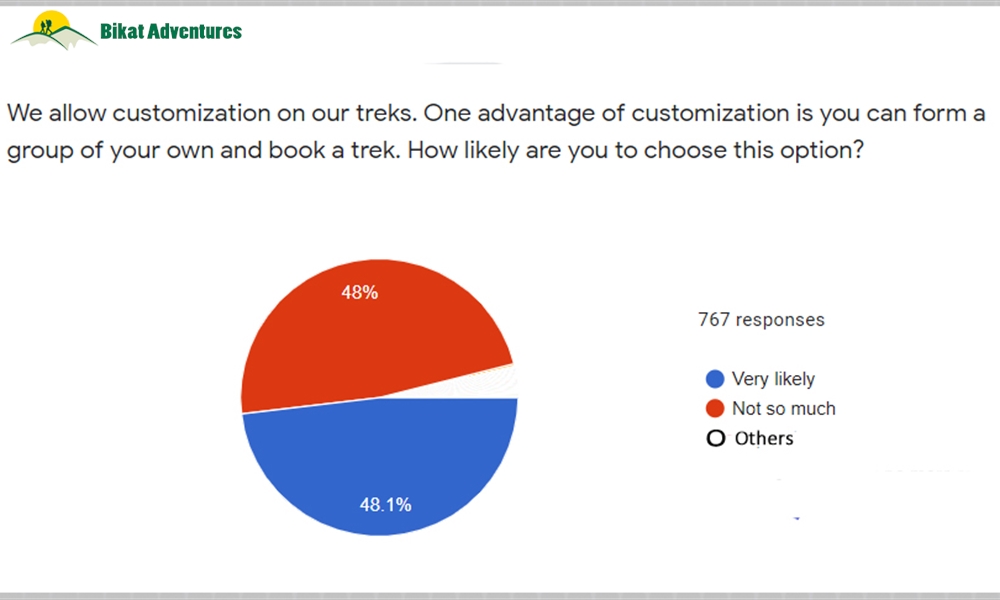 One advantage of customization is that you can form a group of your own before booking the trek.

The votes were split almost equally here with 48.1% of the respondents saying they would opt for customisation and 48% opting to skip it.

3.9 % of the trekkers who chose the ‘Others’ option pointed out that this may not be a feasible choice for those who don’t have a trekking group/friend circle. 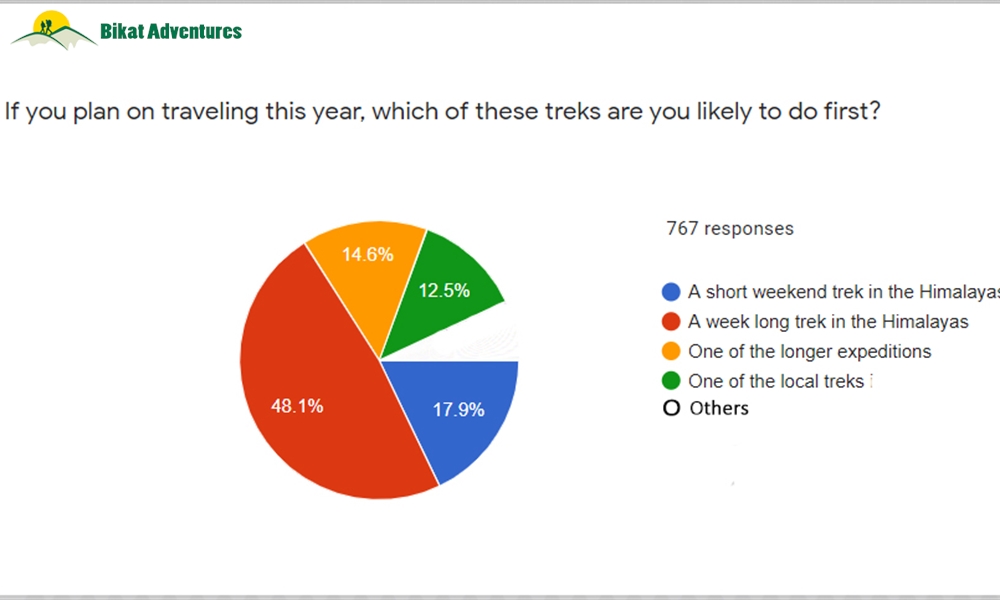 48.1% of the trekkers have said that they would do a week long trek in the Himalayas when tourism resumes.

17.9% chose a shorter weekend trek in the Himalayas and 14.6% of the trekkers wanted to take up one of the longer expeditions.

The rest have either opted to not travel or to do a local trek in their state. 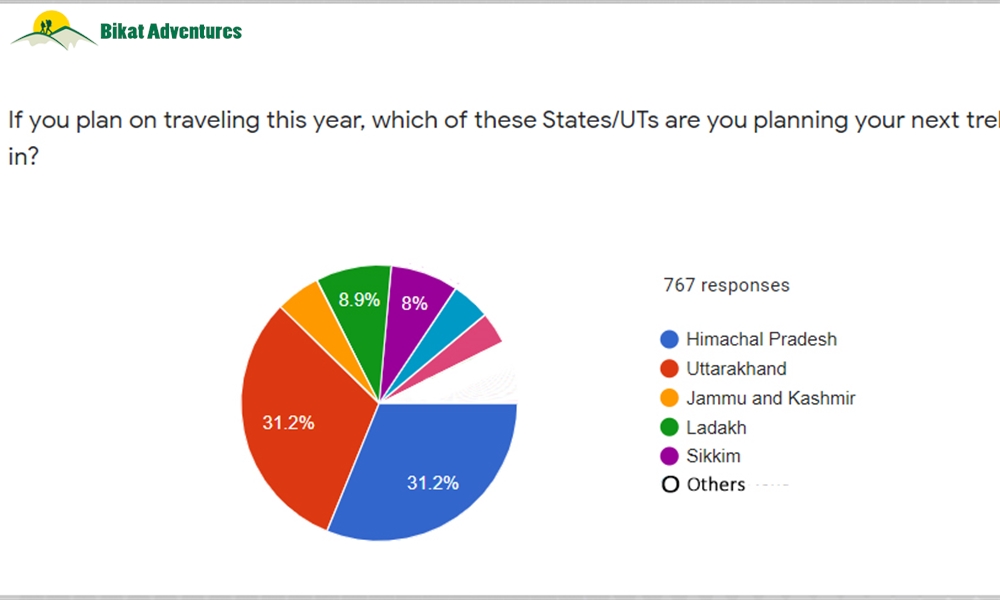 The rest either opted for local treks within their states or not traveling for the year.

The Covid-19 pandemic and social distancing norms have changed many aspects of our lives. Trekking and travelling are no exceptions to this.

It is changing the way people travel. It is chaging how tour operators, hotels, restaurants and airlines operate.

On the trekking front, what are these changes going to look like?

Single occupancy tents, for instance, could soon become a thing. Smaller group sizes, scrapping of dining tents, smaller people to toilet tent ratios, trekking in rolling camps, installing and packing your gear at every campsite are other practices that could become common.

Curiously several trekkers who took our survey last month expressed one other apprehension we did not expect to hear. They felt trekking, at its very essence, is a group activity. Social distancing norms, they said, eat away at this team spirit irrevocably.

This is where we leave you with something to think about.

Is the pandemic really hindering the team spirit of treks?

Is it asking us to pause and question the way treks have been held all this while?

We will be addressing this and more in our upcoming article next week.