Did you know Skiing or traveling over snow on skis has a history of over eight millennia? Since then, skiing has evolved from being a purely utilitarian activity to one of recreational activity and sport.

The word “Ski” (derived from the old Norse Word skíð ) in fact means “cleft wood” or a “stick of wood”. Needless to say, much like the activity itself, the structure and construction of skis have undergone extensive changes over time.

In this article, we will be discussing the different parts of a Ski along with the purposes each part serves. This is also the first module that will be taught in the Basic Skiing Course by Bikat Adventures.

Different Parts of a Ski

Nose of the Ski:

The nose of the Ski refers to the tip of the Ski in front of your toes. This area isn’t entirely flat. It noticeably curves upward much like an elf’s shoe. Since it is the nose that strikes the snow first while skiing, the upward curve allows a Ski to ride over the snow effortlessly.

But, this shape also makes the nose of the ski more vulnerable to breakage/damage. This is the main reason why one should never plant the skis on its nose when holding them vertically.

Tail of the Ski:

The tail of the Ski refers to the tip of the Ski behind your heel when you wear one. These are generally straight cut with well-rounded corners.

Skis made for free-style skiing however, where skiers often ski backwards as well, the tails curve upwards just like the nose to allow for smooth movement in both directions.

The distance between the nose and tail of a Ski is the length of the ski.

Base and Deck of the Ski

The base is the area below your ski that comes in contact with the snow. The deck is the area on the top where your boots attach. Structure of a Ski

The Camber helps distribute the weight of the Skier to the nose and tail of your Ski thereby increasing the surface area bearing the Skier’s weight.

Note: When careening down the slopes on your skies, the entire base of the Ski eventually comes in contact with the floor. 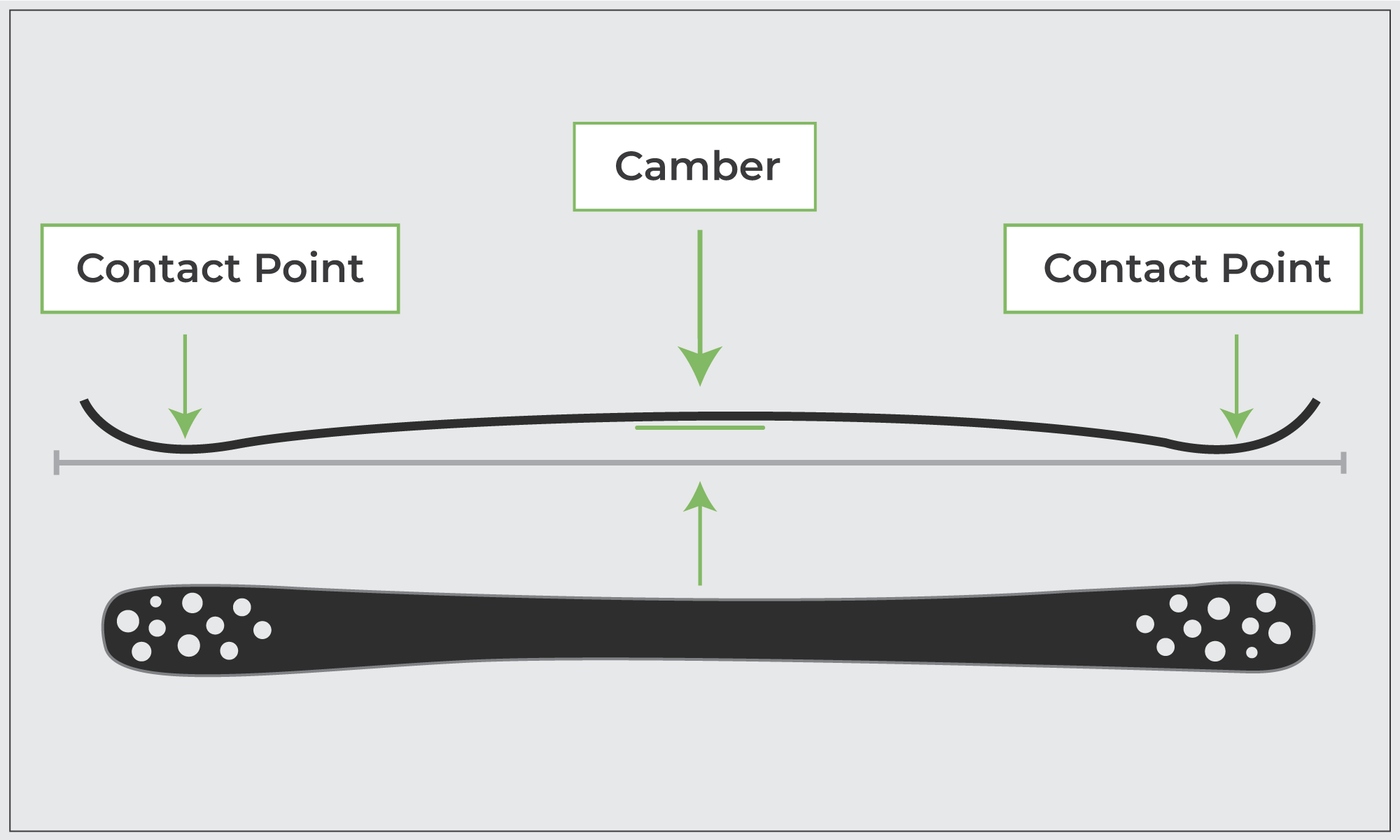 Edges of a Ski

The edges of the Ski in between your feet are known as inner edges and the ones on the outside are called outer edges. The inner and outer edges are made of metal and this is what helps a Skier make turns on the snow.

The sharper the edge, the more pronounced is the turn.

Sidecut of a Ski

The sidecut of a Ski refers to the shape of a ski from its nose to the middle. This isn’t entirely rectangular. Some of the area from the sides of the board is cut out giving the ski a subtle hourglass like shape. A more pronounced sidecut allows a skier to make sharper turns.

Width of a Ski

The width of a Ski is naturally not going to be uniform throughout because of its sidecuts. The widest part of a ski is called the shovel and is generally located on the front of the ski. The narrowest section of the ski is generally at its waist, near the Camber.

The ski binding refers to the section of the ski on the deck where your ski boot goes in. 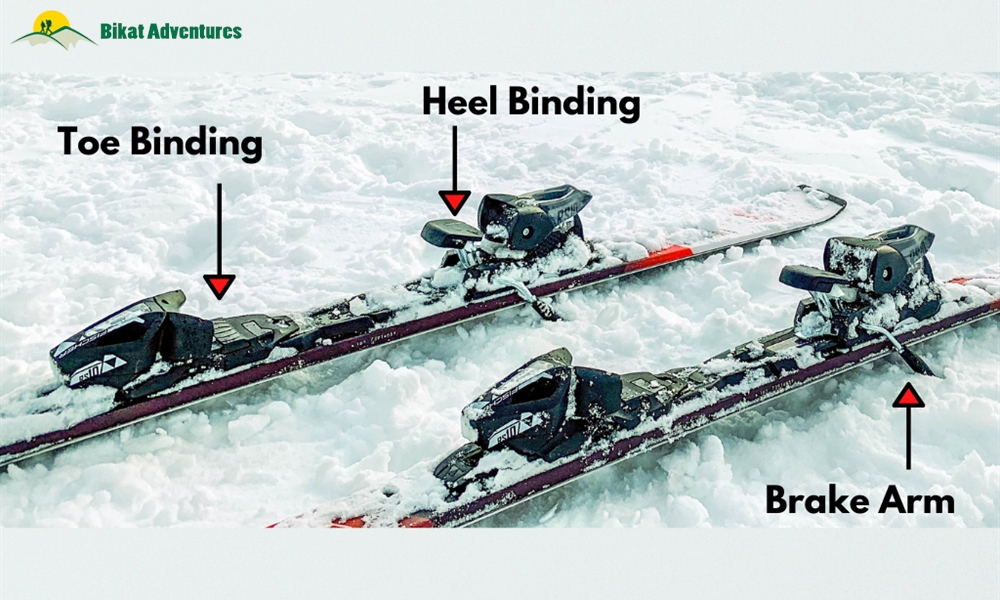 The tip of the binding closer to the nose of the Ski is called the toe binding. It is a cup like structure into which the toe of your ski boot is placed.

The tip of the binding that is closer to the tail of the Ski is called the heel binding. As is evident from the name, this is the cup in which the heel of your snow boot goes.

While on the slopes, you will notice that skiers generally run their boot back and forth across the heel binding to scrub off any residual snow off of their boot before wearing their skies.

The heel binding also comes with a lock that clicks into place when you push your weight through your heel thereby securing your ski boot to the ski.

The distance between the toe binding and the hell binding is the length of the binding. This length can be adjusted to fit the size of your snow boot.

All modern skies are designed to pop off from the feet when a skier falls down the slope. This reduces the chances of injury. Ski brakes are present to stop the skies from sliding down the slopes once they come off.

When your boot is out of your binding, a section of the binding immediately digs itself into the snow, stopping the skies from sliding down. This section is known as the brake arm.

This brings us to the end of the different parts that make up an Alpine Ski.