On A Quest To Bag My First Exploration Trek

Your precise role in a group excursion greatly defines how you perceive the entire experience and prior to this past week, I had played the roles of a trek participant and also that of a trek leader. To further enhance my perception, here I was going on a trail near Manali to explore a new trek that was yet to be documented by our company – Kalihani Pass. Due to its age-old importance as a major route for Himachalis hailing from different corners of the state, the trail is not exactly untrodden. Nonetheless, the trail is yet to be discovered by the hordes and still has managed to elude the attention of enthusiastic trekkers. 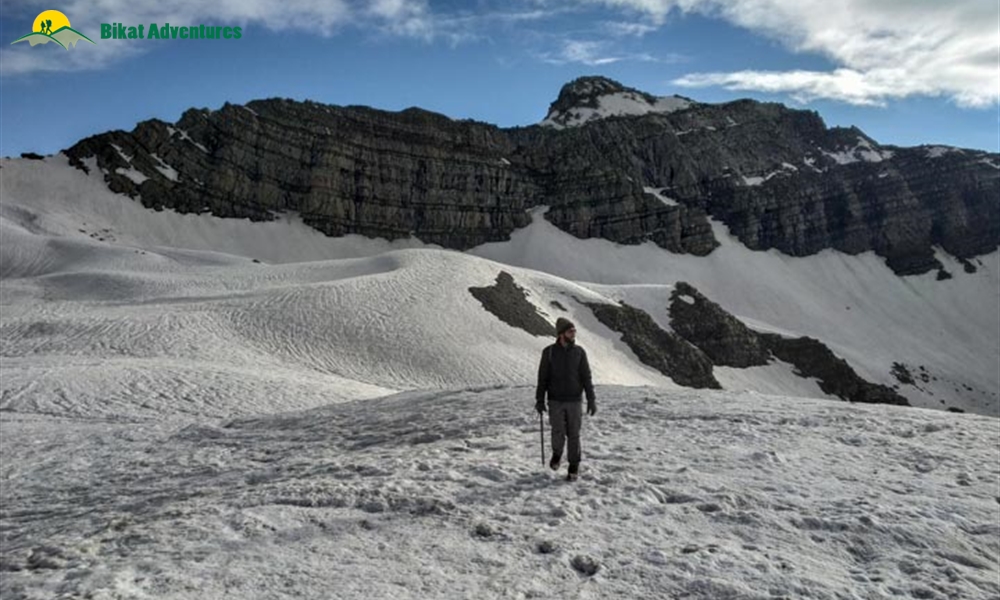 After a painstakingly long and delayed 19-hour bus journey, Indrajit and I rendezvous at Manali and begin arranging for ration and other necessities. A bumpy car ride and we are at Sangchar, a small hamlet 2 hours away, where we meet Naresh Bhai, our local guide, and Akshay with his mules. The trailhead welcomes us with a rather steep set of steps and once we’ve moved past the village the trail opens up (only in essence) – becoming an extremely narrow path with thick vegetation and shoulder-high bushes. Although we had had a hearty breakfast before starting the day’s hike, we couldn’t stop ourselves from gorging on wild strawberries as the local guide pointed them to us (always wait for the green signal from a local!) 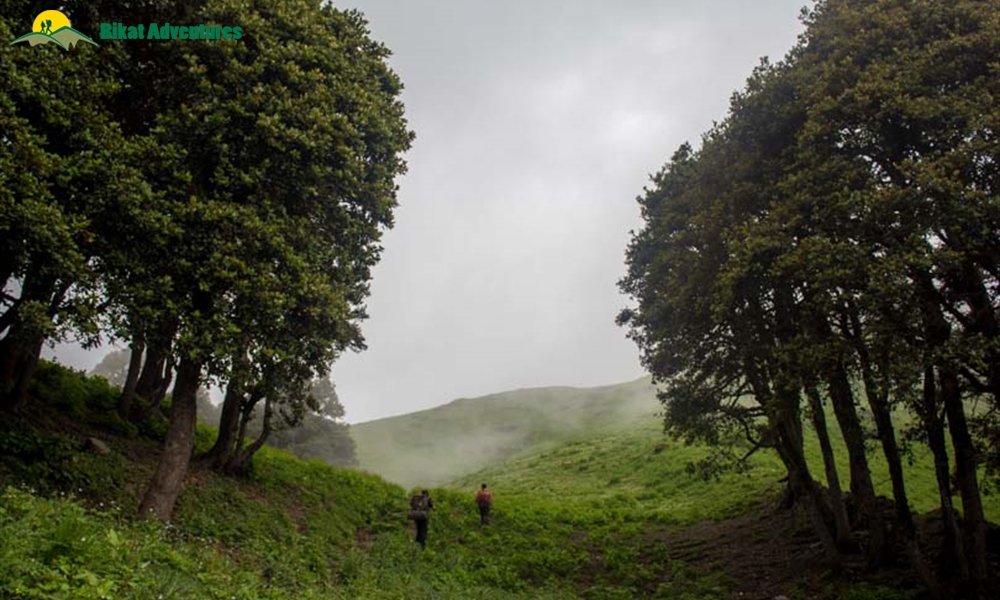 Bound to break a sweat as we gain an altitude of 3200ft. within 3 hours, the flower-laden trail with patches of Darjeeling-esque tea gardens - more on that later – leave us wanting for more. We hurriedly skip the first campsite, Jammu Pani, and reach the top of the mountain, commencing our tryst with the meadows.
Although it was cloudy throughout the day, it started drizzling only once we had set-up camp at Maheli and were done cooking some Maggi – lucky us!

After a good night’s sleep, we pack our bags and get going. Today’s ascent, a meadow hike through and through, is quite gradual compared to the previous day but the distance makes up for it. Over time, the vast green expanses turn from ordinarily beautiful to unbelievably jaw-dropping. Gleeful with how easily we got access to absolutely untouched beauty, we were glued to our cameras - capturing the picturesque views left, right and centre. 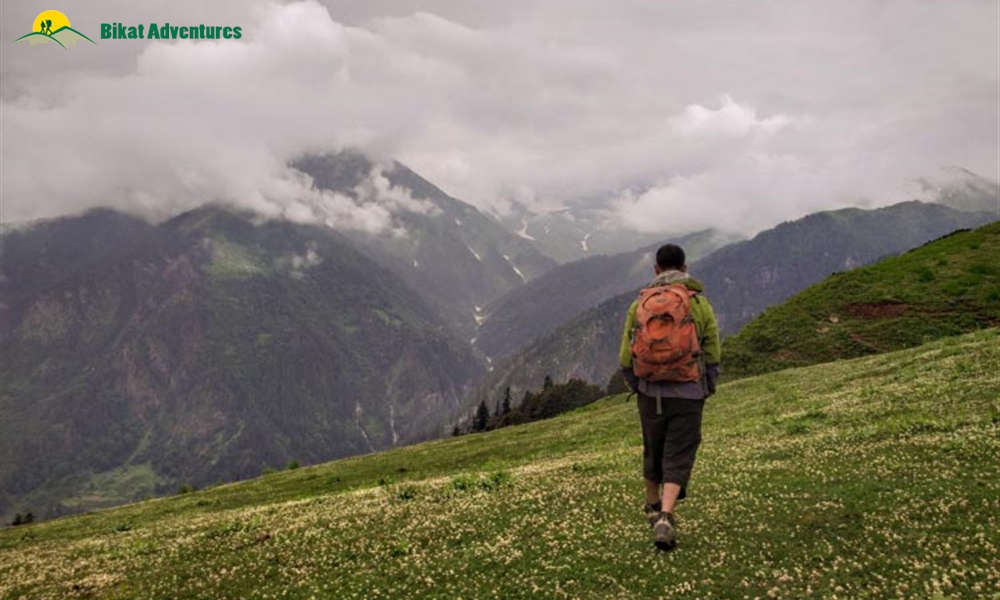 One second it’s clear, moments later it’s drizzling. All of a sudden, it’s raining cats and dogs and I find myself slipping and sliding in the mud. Do heed to these words of wisdom – ponchos are quite ineffective during heavy monsoon (I wish I had taken my rain jacket & pants along). As if we had just played a soccer game in the rain, we reach Riyali Thatch all wet-drenched & muddy. Nonetheless, the only thing on my mind is the fact that we’ve arrived at one heck of a campsite! Wild vegetation that seemed to be like lush meadows from afar were more like meticulously-trimmed & looked-after tea gardens once we got a closer look. Nature sure is the ultimate gardener! 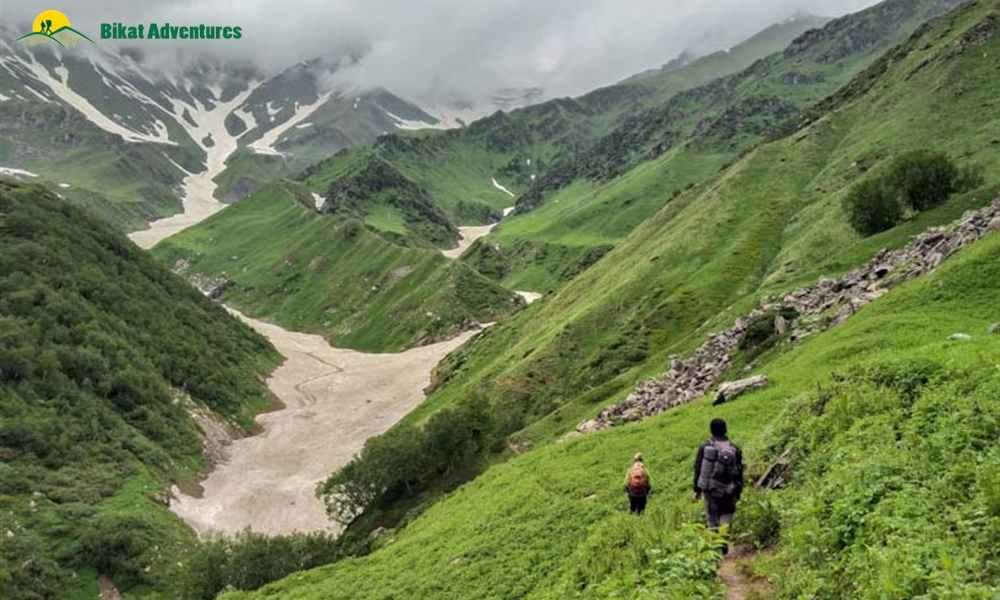 The day, just like today’s trail, had plenty of ups and downs. The euphoria that we derived from this stunning campsite quickly dissipated once we figured out that the rain screwed up the camera and some unknown cause rendered the stove useless. Cooking our meal - rice & aloo-sabzee was a whole new ball game once we started relying on firewood - good luck finding dry wood in this monsoon!

Since the trail ahead led us out of the tree line, we contemplated various alternatives like braving an attempt at the pass directly and/or cooking food beforehand and carrying it. In hindsight, those were all bad ideas. Eventually, we proceeded further, planning to camp at the base camp and hoping to gather wood along the way. We left behind some extra ration and other unnecessary things to free up some space on the mule. 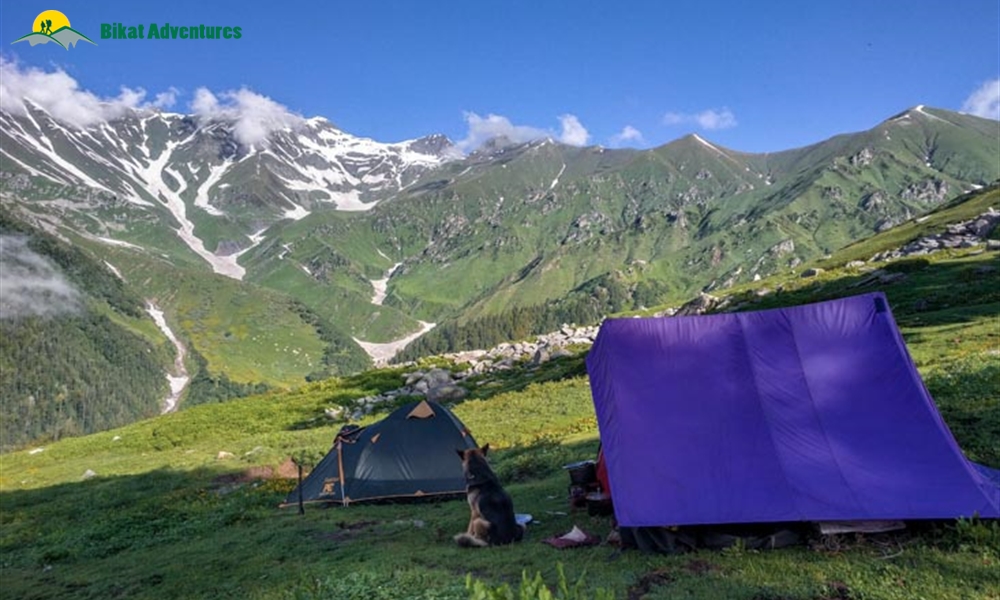 Easier said than done, the entire process wasted a day and a half in total.  Mix in some bad weather as thick clouds engulfed the valley; a complete whiteout forced us to make an emergency halt midway. Cherry on top, our campsite was next to a shepherd, his herd of 900 and their not-so-melodious symphony of incessant bleating! Shouldn’t complain though, as it was the shepherd's dry wood that helped us kindle our fire (ours was quite wet and rather useless without his dry wood). Luckily, it started raining much after we were done having our Pullao (steamed rice with vegetables) and were safely tucked in.

Nothing could dampen our spirits today as we marched on in a jovial mood, really looking forward to what lay ahead.  We crossed a few beautiful streams and were soon treading on a narrow ridge that almost lasted all the way to Saghore, our base camp at 13100ft. The past couple of days, we were greeted now and then by slopes full of different kinds of flowers - Marsh Marigold, Primula, Anemone, Geranium, Phlomis, Common Yarrow, Cinqefoils to name a few. And now, we were wading through a lengthy ridge with an abundant variety of flowers packed together, available within a single glance. The feeling that we’re inside one giant bouquet urged us to make a serious case for this trek to be a better alternative to Valley of Flowers. 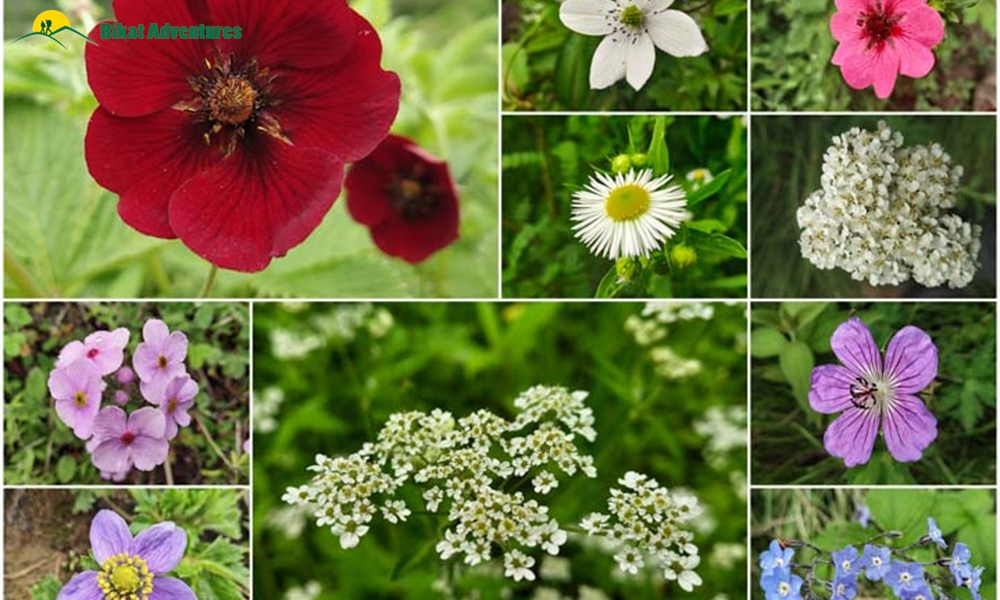 We zigzagged on the slope leading to the base camp and surprisingly reached our destination earlier than anticipated!  Having picked up some dry Juniper en-route, starting the fire was not a tough task. As a result of eating Pullao for the 6th consecutive meal, we began to jokingly call this trek the Pullao Pass Trek!

Everywhere we had been, we were accompanied by complete cloud cover and intermittent rains, today was no different. Fortunately, we were cozy in our tents before it started raining. Although we had already lost hope that we’d ever get a window of absolutely clear views, the eight hours of continuous rainfall that ensued made us doubt whether we’ll get to climb to the pass at all. We had one shot and we had to make it count as we didn’t even have sufficient wood to wait out at the base camp for a few days.

Let’s dive into the longest day of the entire trek. After a rather fitful sleep, I got out of the tent at 3 am well aware that the rain had stopped but surprised to find that the sky was clear. Making the most of this opportunity, we quickly ate some Maggi and set off from the base camp in pitch darkness, starting around 4 am. Its dark, the sky is clear and there’s stillness in the air – we cover the gradual glacier ascent with confidence. At the break of dawn, the climb got steeper but we kept on pushing, drawing inspiration from the breathtaking views!

The first rays of the morning sun illuminated the towering peaks of Indrasan and Deo Tibba, and suddenly the valley below us was brought to life. Although the peaks are visible through most of the trek, the clouds didn’t allow us even a single glimpse before this moment. I ended up spending a lot of time turned backwards, cherishing every second of the magnificent sunrise. 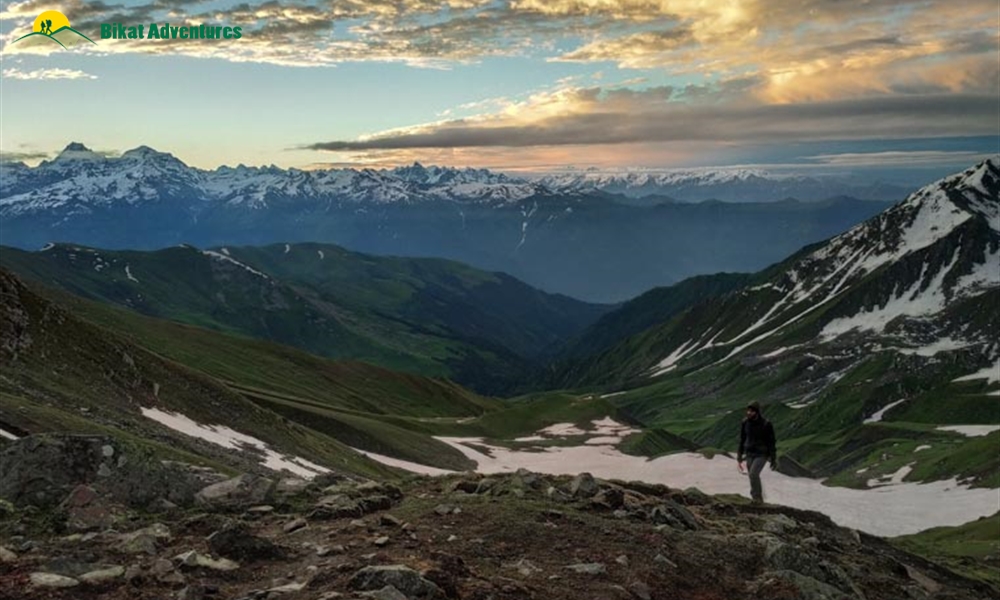 The glacier turned into patches of steep ice slopes, precarious scree and loose boulders. Every step towards our goal felt heavier than the last, but the thrill was for real as we negotiated endless moraines.

I hoped that the pass was getting nearer, but ha-ha said the mountain and na-na said the local guide! Every time you dared to think that you’re closing in, the pass moved further and further away. The pass won every round of hide-and-seek, not becoming visible until the last second. An arduous climb later, we make it atop the Kalihani Pass around 8 am! 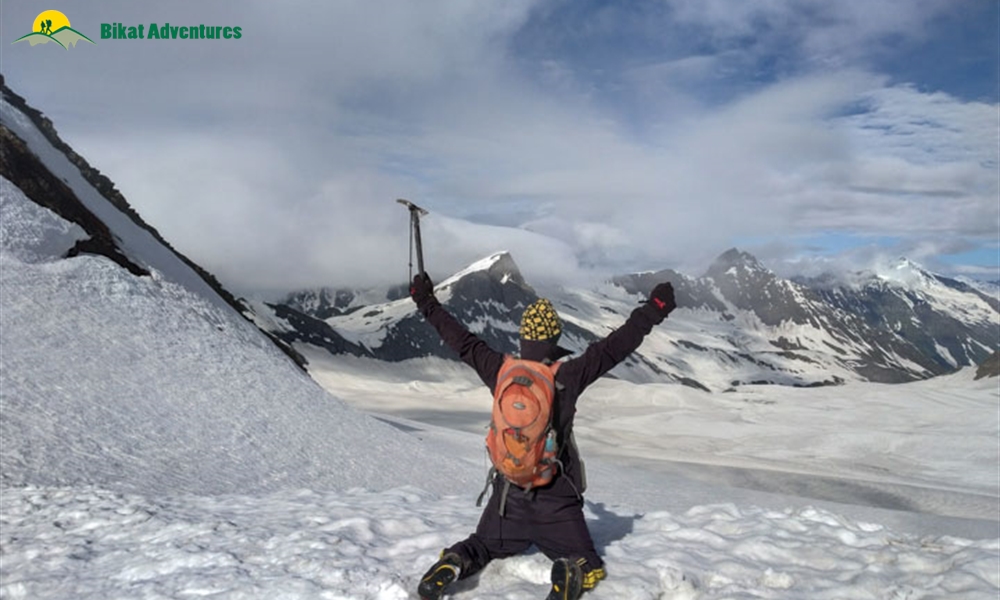 It was so exhilarating, standing tall at 15800ft with panoramic views of the mighty Pir Panjal and Dhauladhar range. The selfies and the celebrations went on till a foggy white-out forced us to start our descent.  You see, we were lucky to be unlucky - it must have been divine intervention that caused us all the delays, for these four hours were the only window of unencumbered views that we encountered throughout the trek.

The way down is not easier by any stretch of the imagination, knowledge of self-arrest techniques are an absolute must when traversing such steep inclined slopes. Very carefully, we climb down the moraine and make our way down the mountain. By 10 am, we were back at Saghore and within no time were done with lunch. To get back under the treeline, we packed up and left for Riyali within an hour. 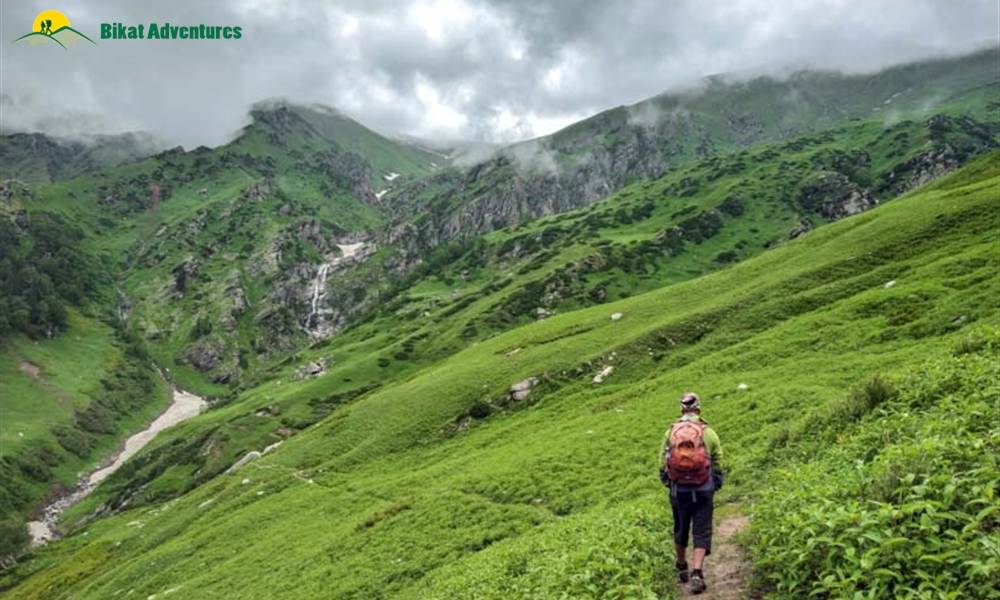 I guess there’s a price involved to stay at a campsite as marvelous as Riyali – the only campsite where we reached completely rain drenched – TWICE!

The idea that we should skip the next campsite – Lamadugh was conceived, deliberated and decided on at six in the morning. It majorly stemmed from our collective desire to reach Manali at the earliest to eat something apart from Pullao, and once the words butter chicken were uttered, the decision was kinda unanimous! 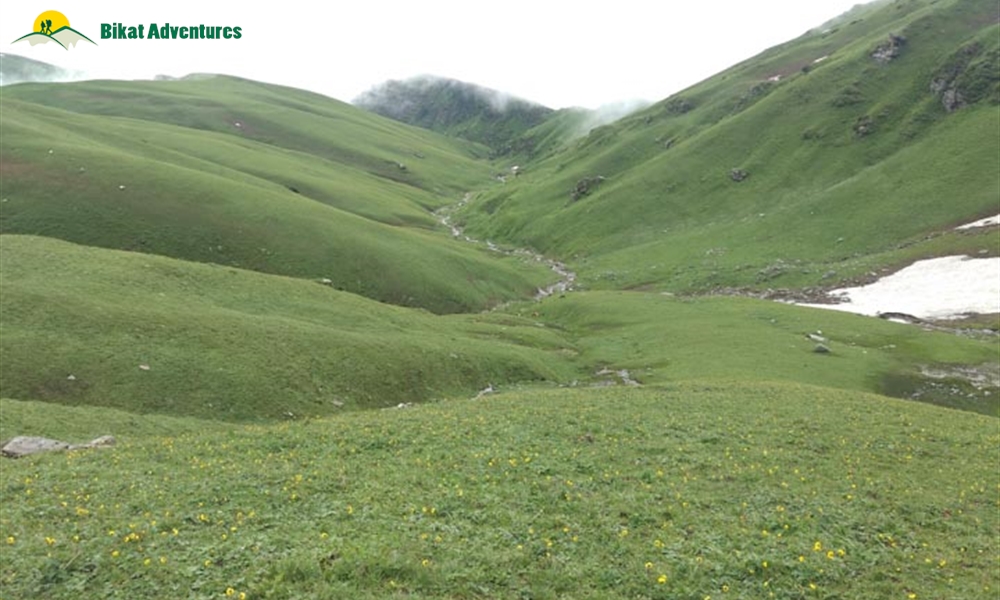 We were eyeing a 15km hike all the way to Mall Road, Manali; and barring the first two hours required to get to Khanpara Tibba, it was a downhill walk.  Having spent a lot of time lately retracing our steps, we finally ventured onto a new trail towards Lamadugh. The path back was equally scenic; walking on top of one vast meadow after another till we got to Khanpara Tibba, a 13100ft peak which has the best views of the Beas river valley. After that, it’s a continual descent to Lamadugh. You can tell that you’re nearing civilization, as signs of human presence become apparent. A few more hours downhill and the trailhead ends at Manali near the Hadimba Temple. Surprisingly, the temple had no queues, granting us a chance to seek her blessings and end the exploration on a fantastic note!

Want to know more about this trek? Find all you need to know in this blog on the highlights of the Kalihani Pass trek.