An unplanned trip can take you to a village, where you’ll make new friends. It can take you to the mountains, where you’ll feel tired, but you won’t stop. It can give you a perspective that will make your life beautiful. It can give you moments of happiness that will make you smile forever. An unplanned trip can give you a reason to live.Sometimes, we have no explanation for things that we do. We just do them. Maybe because it feels right or may be because we get too excited to see the outcome. Something similar happened to me on 20th January 2016.At midnight, while I was scrolling random pictures of people traveling, I felt like going for a trek. Within few minutes, I was 100% sure I would go, no matter what!On 22nd, I left office at 7:30 PM and boarded the train to Dehradun. On arrival, I took a bus to Mussoorie, then walked to Tehri bus stand and proceeded onwards to Thatyur. I had no idea about the route. I talked to people on the way and moved on, one step at a time. Then, I took a shared jeep from Thatyur to Aunter. To my surprise, the jeep was occupied by 20 people (5 in the front, 7 (2 children) in the middle, 6 (2 children) in the back and 2 on the top of the jeep). Someone in jeep suggested me to stay at Aunter for the day and go to Nag Tibba, the next day. He also asked a guy (Ashish) to take me to his home. I was wondering, why would Ashish do so?During that jeep journey, I felt lost. I had no clue about the route to Nag Tibba, how difficult or far it was. I was alone, clueless about what I was going to do, where I was going to stay and eat? At that time, I was wondering if I did the right thing by going there. Thoughts like “Should I go back to Mussoorie?”, clouded my mind. As I remember that moment now, it feels really amazing! When I reached Aunter, Ashish asked me to stay at his home for the night and go to Nag Tibba the next day. It feels really good when unknown people help you, without any reason, without even knowing you.With no options in hand, I obviously had to stay there. Actually, I really wanted to stay there, but the feelings were somewhat mixed. Unknown people, unknown place and stay in an unknown village. On one side it excited me but on the other side, it really scared me. I always wanted to stay in a village but I believe I wasn’t prepared for it at that time.

Ashish showed me the room, where I was supposed to stay. I was confused about how much I should pay him for this, so I asked him about the money. He refused and said calmly, “ye apna hi gaon hai, paise ki koi baat nahi hai”. His words surprised me. 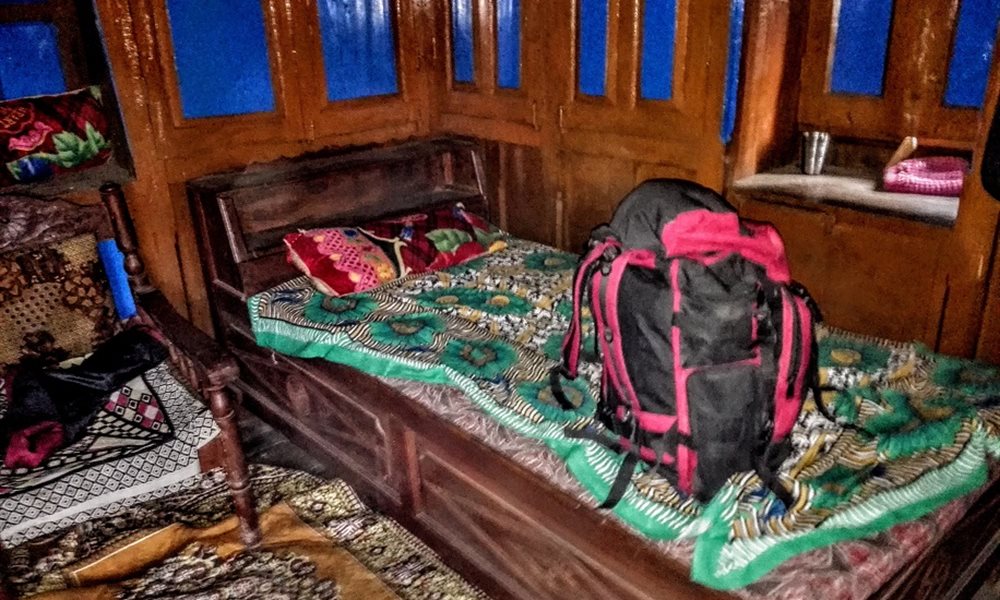 Ashish told me about his brother’s marriage a day before and another celebration to be held at home that day. He mentioned that whenever someone gets married, the whole village stands invited. 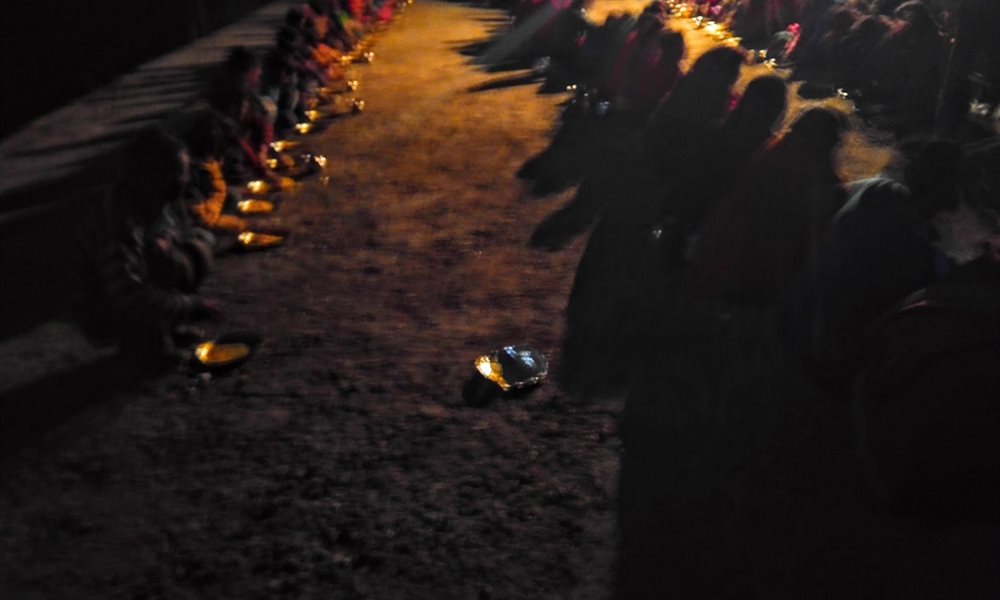 In the evening, some kids came to me and asked me to click their picture. After the photo session, they took me around the village. We wandered for the next 3 hours. They also arranged a guide for me to go to Nag Tibba in the morning.

At night, Aman (Ashish’s other brother) arranged food for me. Though it was his brother’s marriage function and he had many things to do, was tired and sleepy yet, he cared to bring food to my room. Until I finished, (I ate like a horse! Food was yummy :D), he sat there to help me, should I need anything. The way everyone was taking care of me was simply unbelievable. After dinner, Aman and I indulged in a nice long conversation. Our thinking about life seemed to be quite similar. 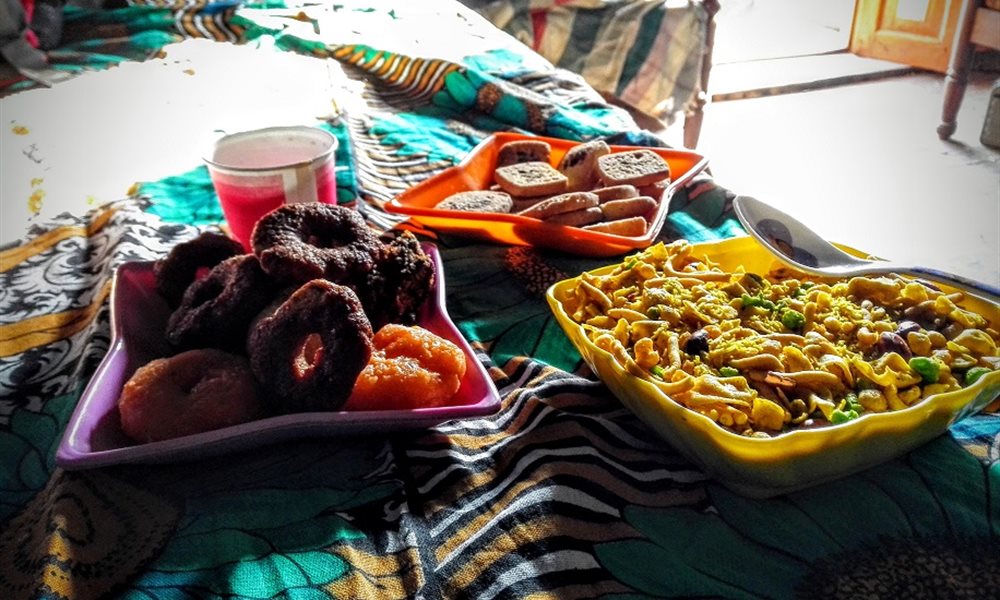 Those few hours made me feel happy about being there. No matter how unplanned the trip is, there is always something new about it. These trips bless me with moments of happiness that make me smile. I cherish those memories and will always remember that day! I will miss those people. They gave me happiness for a lifetime. Thank you, Ashish, for asking me to stay back that night! 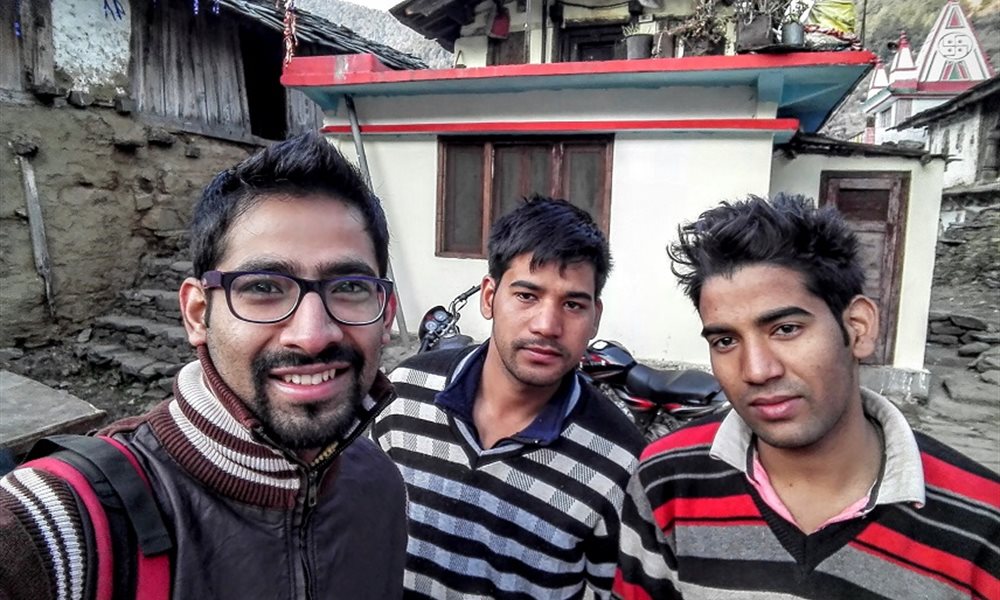 Next morning, I woke up at 7:30 AM and saw that there were two blankets on me instead of one. I got ready and went to Shobhit’s house (my guide for the day). Shobhit is a class 8 student (Almost all the kids in the village go to school). He had left school for 3 years because teachers were too hard on him. Then one day, Ashish came to him and explained the value of education. Next day, he started school again. 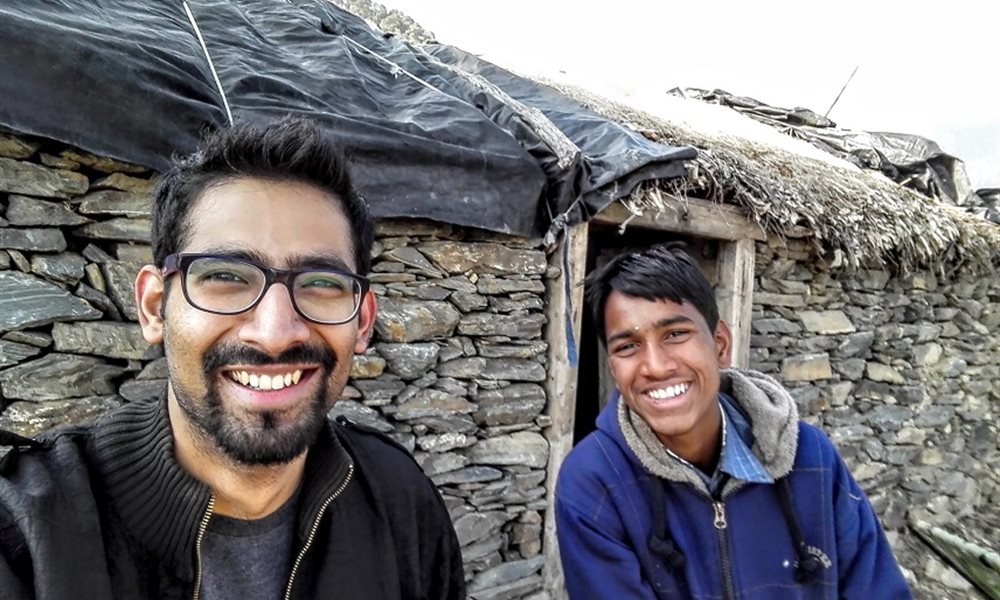 At 08:45 AM, we started our trek. I was carrying a bag that weighed around 10-15 Kgs (Yeah! I was a fool to take everything on the trek) and Shobhit had a bag that weighed 2-4 Kgs. First few kilometers were very difficult. With a bag that weighed over 10 KGs, I gave up within 30 minutes of the trek. I felt like going back. But soon I convinced myself to move on. After some time, Shobhit asked me to exchange the bags. I walked like a pro for the next few kilometers. But then, we decided to keep the bag somewhere before moving ahead. Next, we moved eatables and some clothes in Shobhit’s bag and kept my bag at a hut on the way (I was worried like hell about my bag till I got it back). As we unburdened ourselves, life became easy! There was no stopping then! En route, there was negligible snow and temperature was about 8-12 degree Celsius. We talked throughout the trek and our conversations were never ending. Trek would have been boring had Shobhit not been there because we didn’t spot other trekkers. We climbed and crossed multiple mountains, clicked a lot of photographs and finally reached Nag Tibba at 12:15 PM (Yeah!). We stayed there for half an hour before deciding to move back. I had plans to visit Mussoorie the same day. 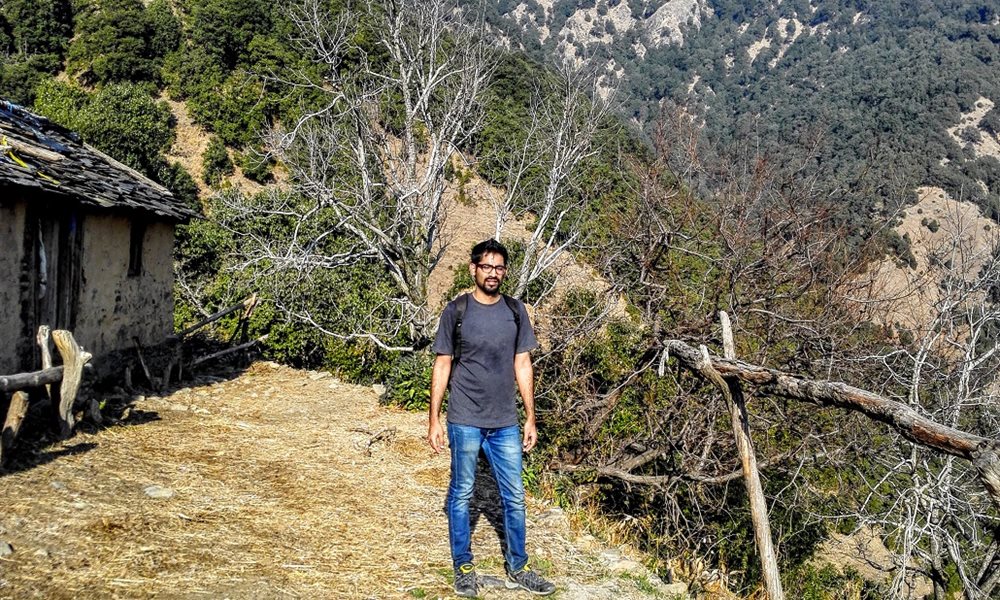 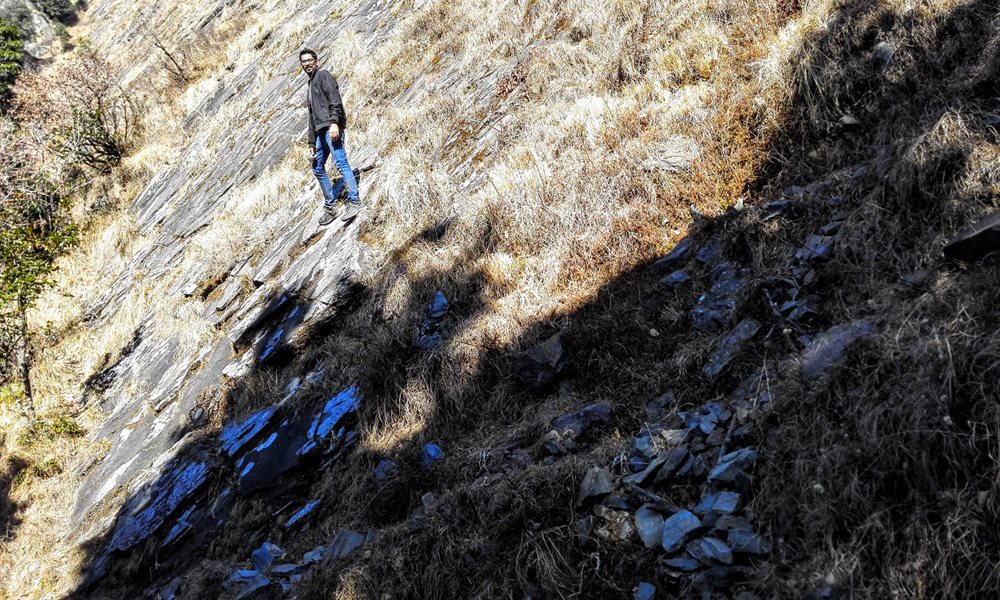 Shobhit liked getting clicked and I think I captured over 30 photographs of him. He also requested me to put his photographs on Facebook. On the way, there was a mountain that was just a huge rock. Shobhit wanted to get a picture clicked there so he climbed the mountain as if the slope of the mountain was 0. Here is his picture, while he was climbing/walking on that mountain. I was really astonished to see him climb like that. 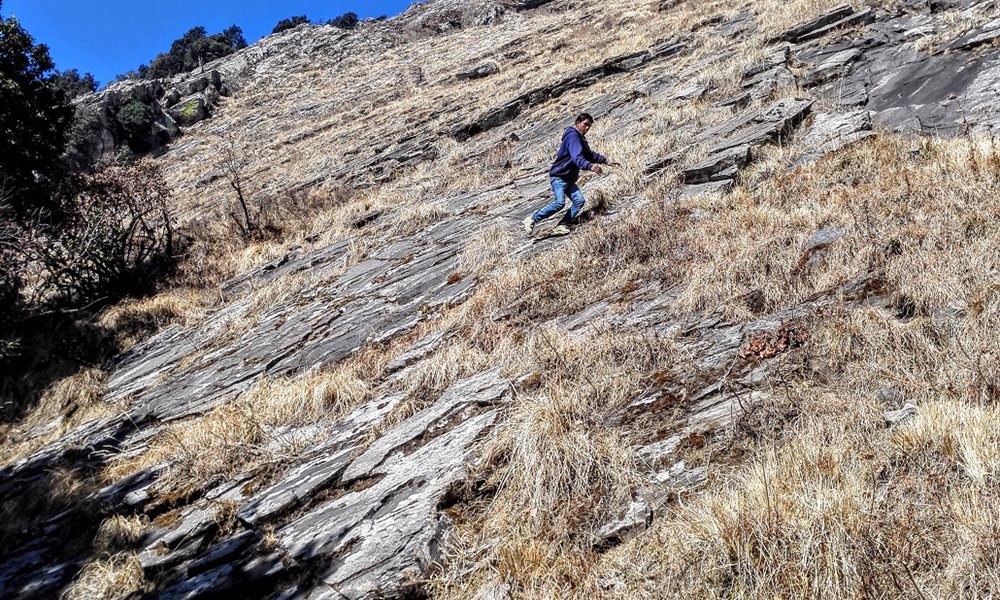 I was all set to go to Mussoorie that day, but Ashish’s family convinced me to stay there for the night and I obliged. Post dinner, we all gathered in the kitchen near the fire and talked about random stuff, for hours. At that time it was all different. There was no internet and no one was using mobile phones either. Everyone was just sitting and talking about life. In those two days, I had not made friends, I had found a family. And I know I’ll always be welcomed back there! 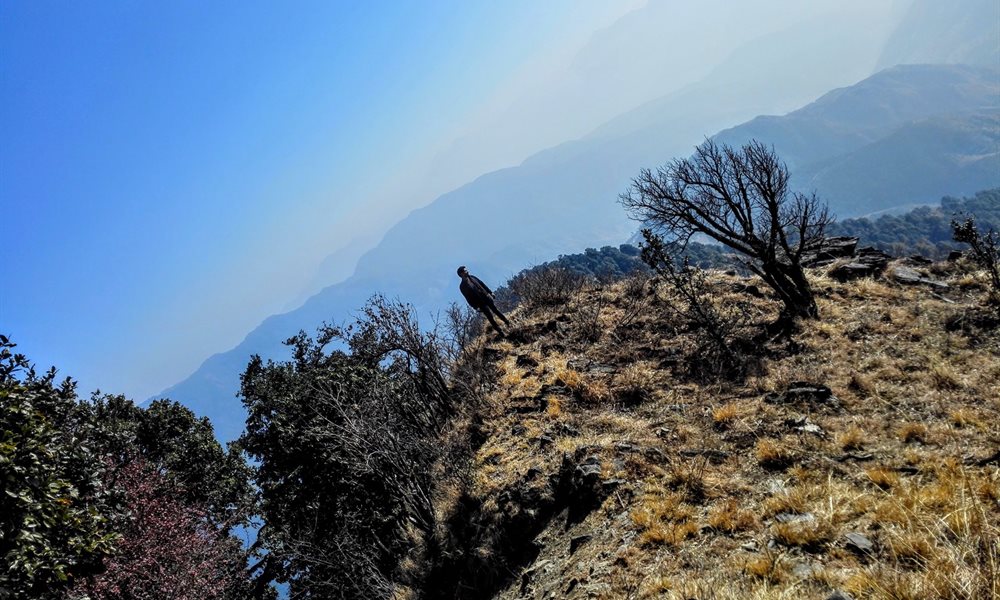 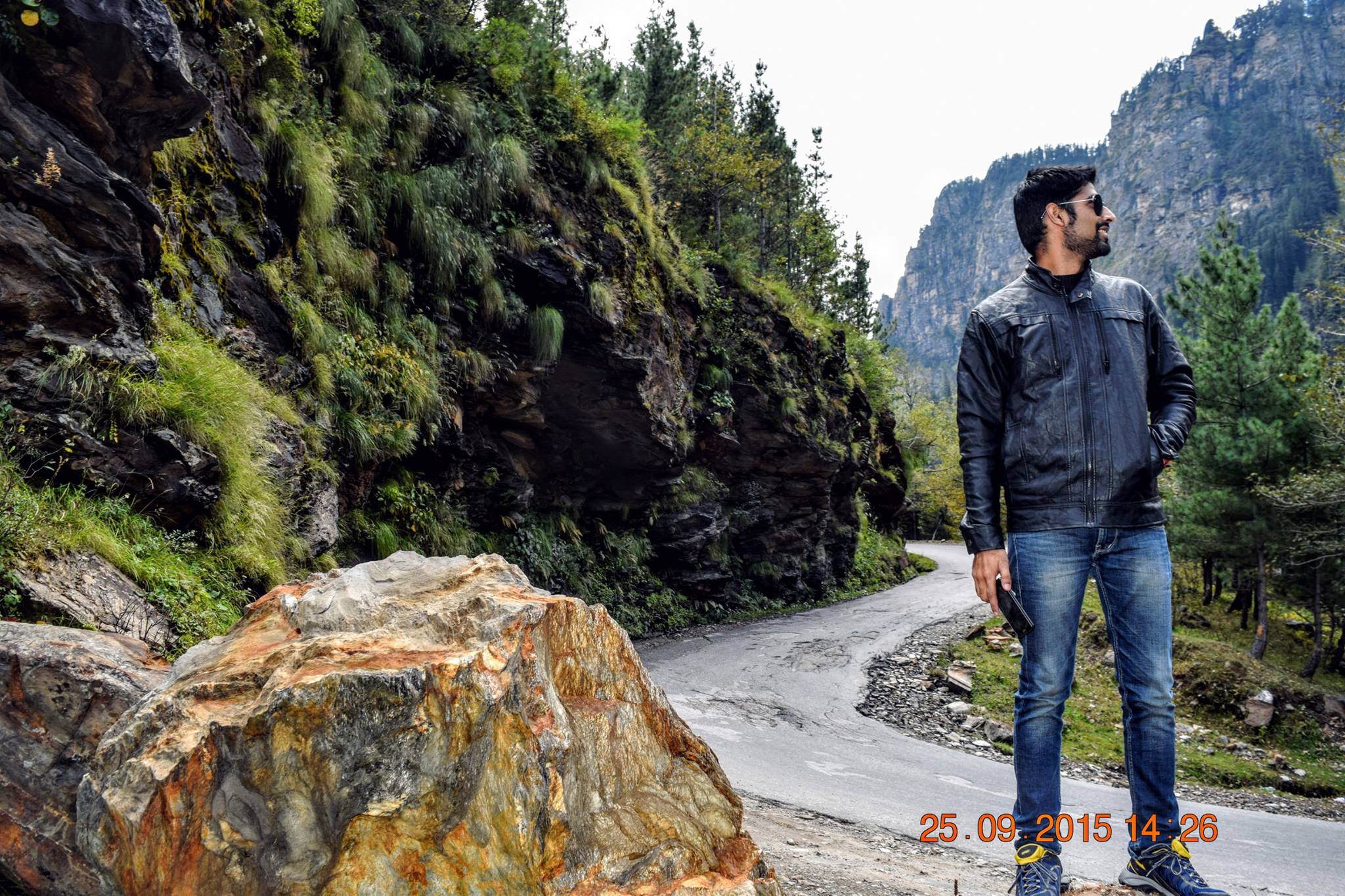 Sahil Gulati is on a mission to visit all the states of India before 30. Apart from visiting 12 stat Read more