The Tale Of Panwali Kantha Trek

Six guys ,one long bus trip to Guttu and a late start to the trek is not really the most auspicious start to a trek that’s expected to trod some heavy snow! But then with a homogenous group there is no issue with lack of motivation.

We were already late when we started from Guttu (almost 5 hrs from Rishikesh..thanks to mother nature screwing up en route roads. And thanks to the clear weather and a balmy breeze, we were up and bright. Our cook (hired from the village) who was moonlighting as a cook as the business of his shop could wait was full of energy and frankly a little preppy. Our guide, Sajjan Singh, was a rather loud but honest to goodness all-in-one who had the choicest of words to motivate the porters (even in the early hours of the start) . 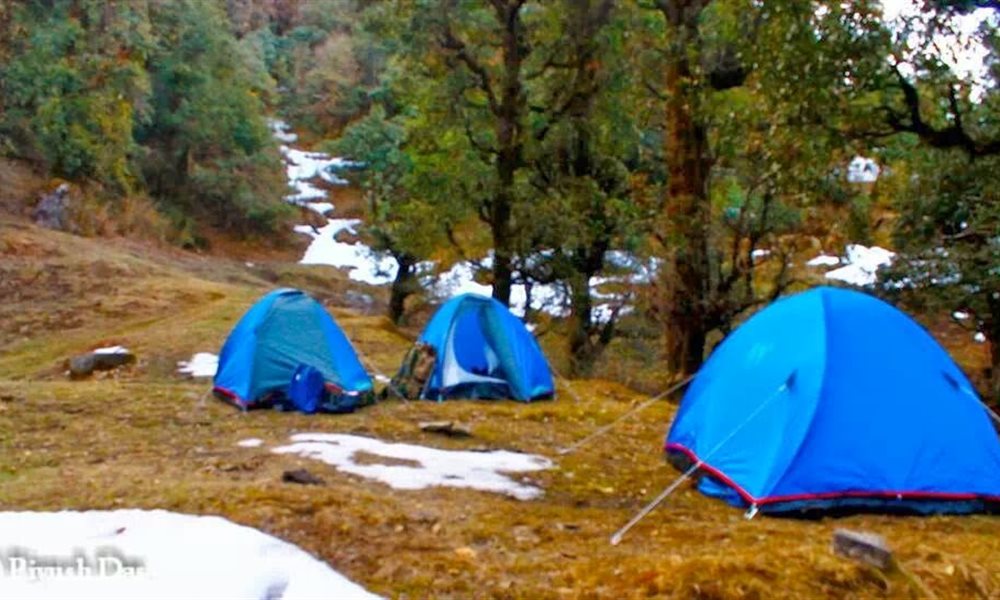 As we walked we were given a brief route detail by Sajjan and although all of us were eager to glimpse the peak..we realised it was way too off.

A small iron bridge along with some pretty ladies loitering around and smiling at us, city jokers ..well kind of cheered us up.Calling for a pit stop to fill fresh spring water, sajjan, attempted some small talk. Manish was an avid trekker, Ritvij was a pro, Ankit had done treks while Bittoo and Rajat were newbies. Self was not an old hand at trekking..just an old hand.

Small talk wasn’t happening because frankly we knew each other in pairs, I knew Ankit, Ankit knew Bittoo, Manish knew rajat and Ritvij knew Ankit. And Sajjan Singh was attempting to know everybody.

The first days walk is always very optimistic even when there is a slight gradual climb into the unknown but the small diversions on the way kept us even more charmed. Eating the Burunsh flowers on the way and trying to test the load of the firewood/cut grass which the women folk were carrying back (trust me guys...those loads were above 50 kgs and these ladies were walking back without so much as a care). Frankly I almost saluted those hard-working ladies. (wait..I did salute them). 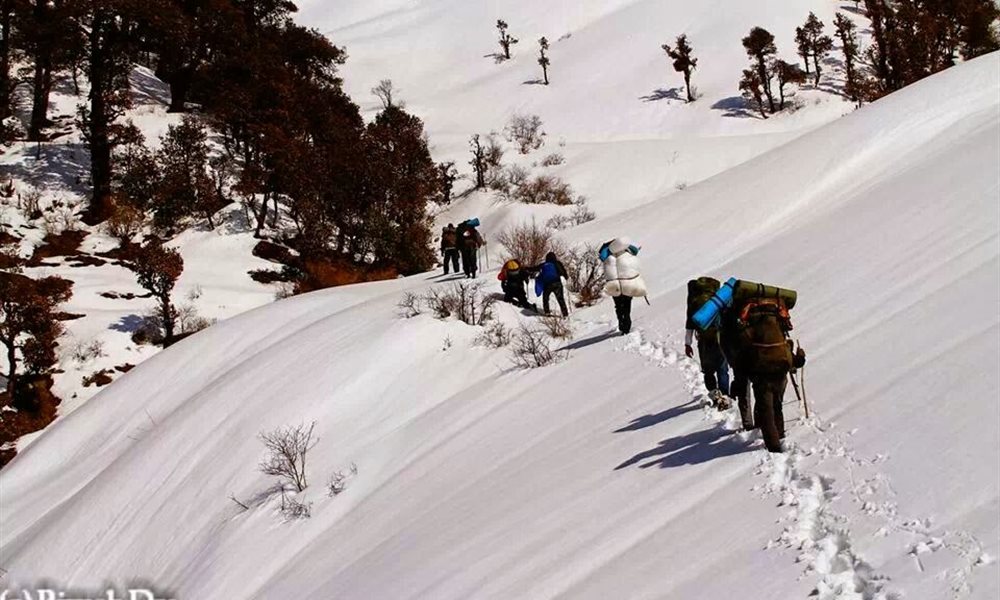 As we kept walking, I realised that our pace was pretty slow and with the evening coming in fast we will reach Ghaurmanda late. But then the team picked up speed with the last stretch and we just made it to the campsite as dusk closed in.

There were two shephard houses but while we made one of them a kitchen tent, we decided to camp a bit away ourselves. Tents unfolded and we saw some patches of snow and after the body had cooled down we did feel a chill.

A campfire warmed up the conversations while we actually got to know each other better ..all of us concluding that it’s nice to have a uniform group rather than too much of difference as that might have created problems in pacing. 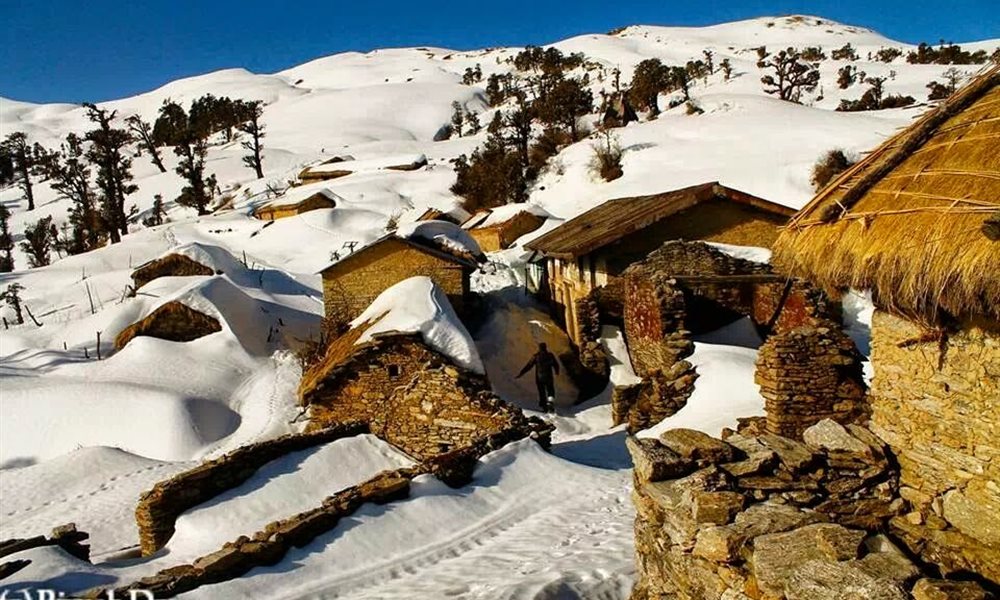 Next day we broke early and began the real trek. After almost two hours of walking we first came across some nice snow. And since all of us generally had the idea that we would be encountering snow..it was not a great surprise. What was the 'great surprise' was that the depth kept on increasing exponentially. It was an effort to move even one kilometre in that kind of snow.

Our very own Sajjan Singh was almost taken aback by the snow and was slightly apprehensive if the group could make it through. In fact in the second pit stop right in the middle of a snowscape he was invariably searching for an answer from at least one of us to advance the base so as to make the climb early tomorrow. But kudos to the group that none of us ever gave an inkling that we were uncomfortable.

We marched on in almost 4-6 feet snow. 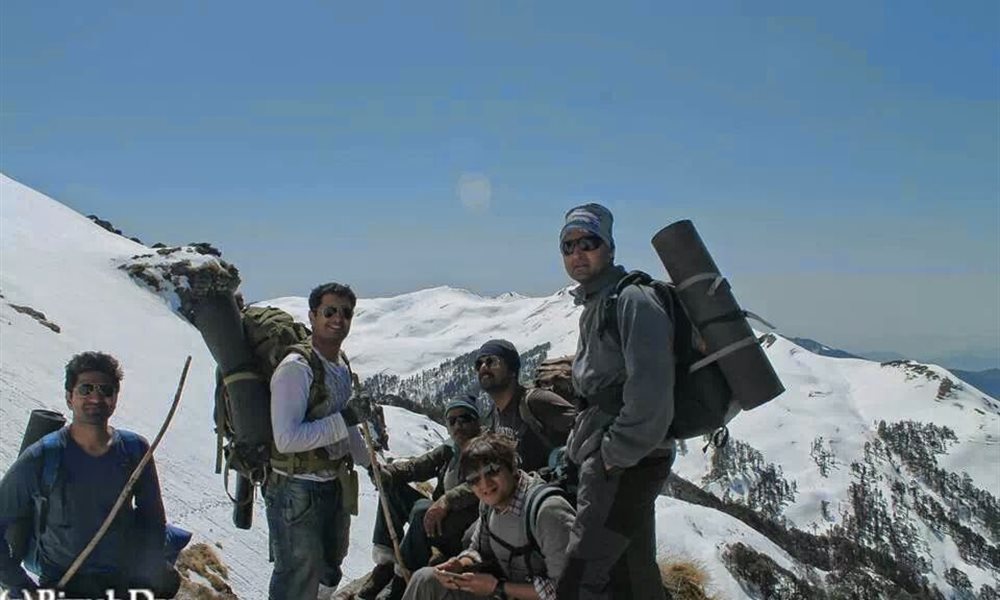 It was an experience which reminded me of my failed attempt at Stok. I was glad that at least there was no altitude or sub zero temp here. It was actually not that uncomfortable if you get used to walking like you are jumping from one ditch to another. Infact crossing the ridges at around 1600 hrs we could feel safer as the snow provided the much needed anchor. As we neared the Panwali Kantha ridge , we could see the small temple on top.

Now ,it’s said that seeing your destination makes goal easier, Bull shit. One thing I have learnt that while trekking never ever look at the mountain top. Like a fresher in college , keep your eyes in front of your step and keep walking. So we kept walking.

The last ridge we had to cross had deep snow followed by a bald patch ..followed by a steep climb. We (which means I) were not really tired but kind of exhausted by all that snow. Seeing the peak so near we almost recharged ourselves and almost made a dash.

Uneventful climb ..except for a slippery patch ..and then it was HEAVEN... 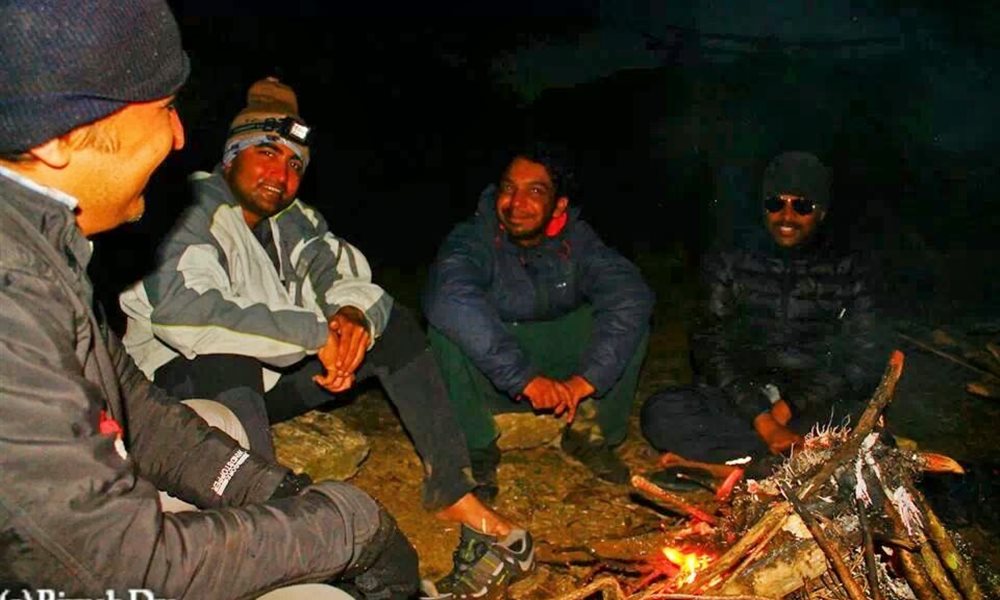 From the peak the panorama of lower himalayas unfolded in the golden sun..and frankly I sat there for sometime and happiness burst into me. I guess this is the 'kick' of a trek. To call it beautiful is stupid. It’s an experience that stays with you and pulls you back..! A couple of Facebook updates later(kidding ;)).. we almost rolled down to the base village Panwali(as of now abandoned). 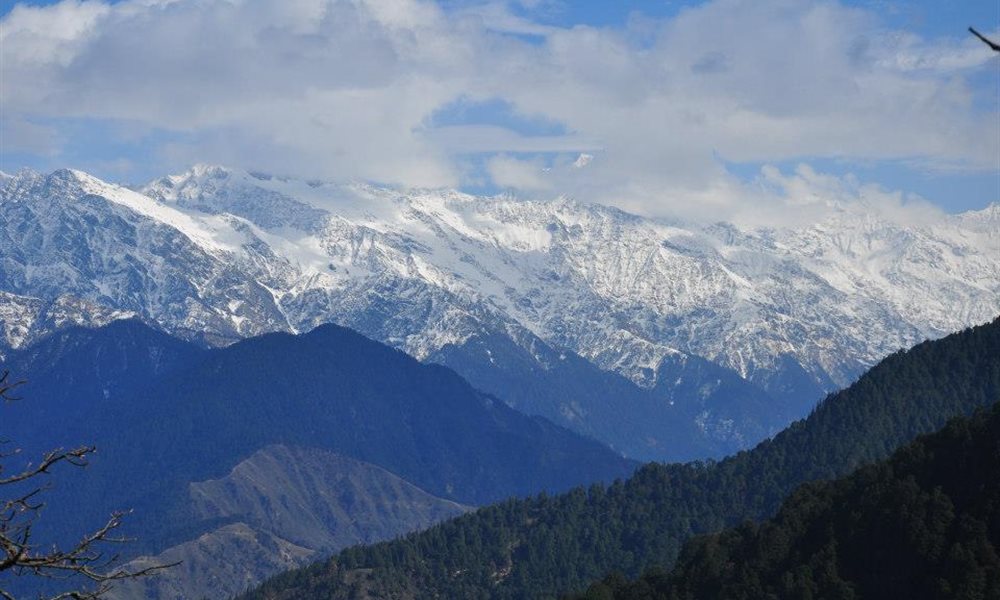 As we reach the settlement , we find that Sajjan Singh ji has got keys to the houses. When it’s opened we find that we are blessed. The room has a wooden platform(no sleeping on snow/ground) and is fairly insulated.

We collect some wood(actually our porters turned out to be great in this regards) and start a fire in another under construction house. Almost walking entire day in thick snow had turned our lower body into icicles and we revelled in the smoky fire. Wet socks and shoes were jostling for action while we kind of drifted into the joyous mood of celebrating this small climb...

Pakoras arrived..so did soup . And so did Bakar(for all the non-hindi speaking Indians,Bakar has no english equivalent. Its a mixture of small-talk and totally stupid blabberings) . Sajjan Singh was the hero of the talk..especially his calculation of the weight of ration we have eaten. Soon our stomach and Sajjan both growled for dinner.We went obediently into the kitchen house..

As we poured some warm dal , sabzi and fresh rotis into our canteens... 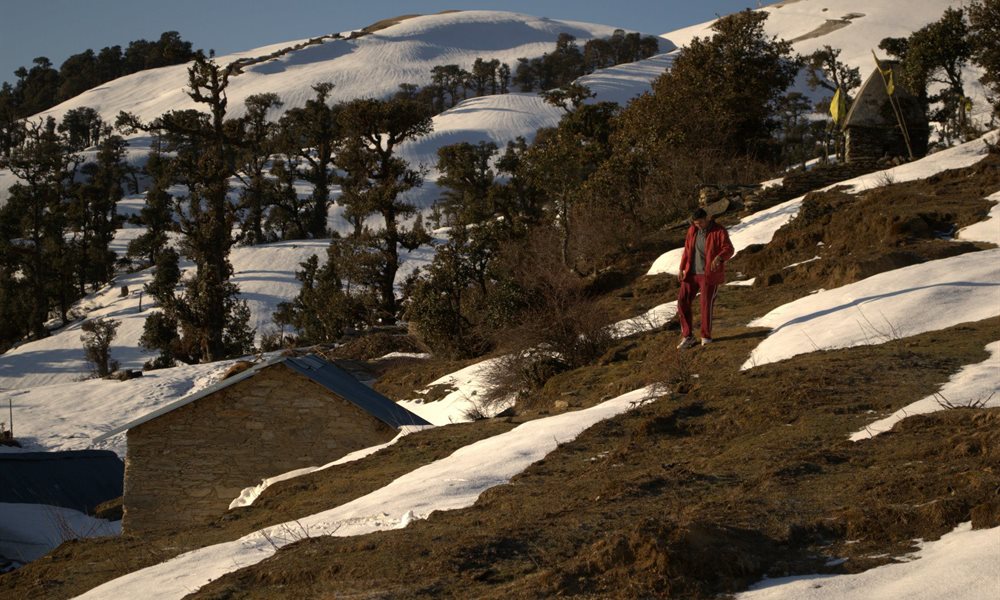 (This film is based on fictional characters ..any resemblance to any person living or dead is purely coincidental. No animals were harmed during its filming)

Well let’s say something happened. We will leave it at that. The incident led to imaginary loss of two toes by Ankit, a temporary memory loss for Rajat, a stuntman casting for Bittoo and me wondering what the shit happened! Ritvij..??well where the fuck was he?

Suffice here to say that almost two weeks after that incident we ,all six of us have fond memories and in another two months given the PR skills of Ankit..it will be the stuff of legends. People after us will scarcely believe that so many will owe so much to so few for an amusing tale on Panwali Kantha..(apologies to Churchill for screwing up his quote about RAF) 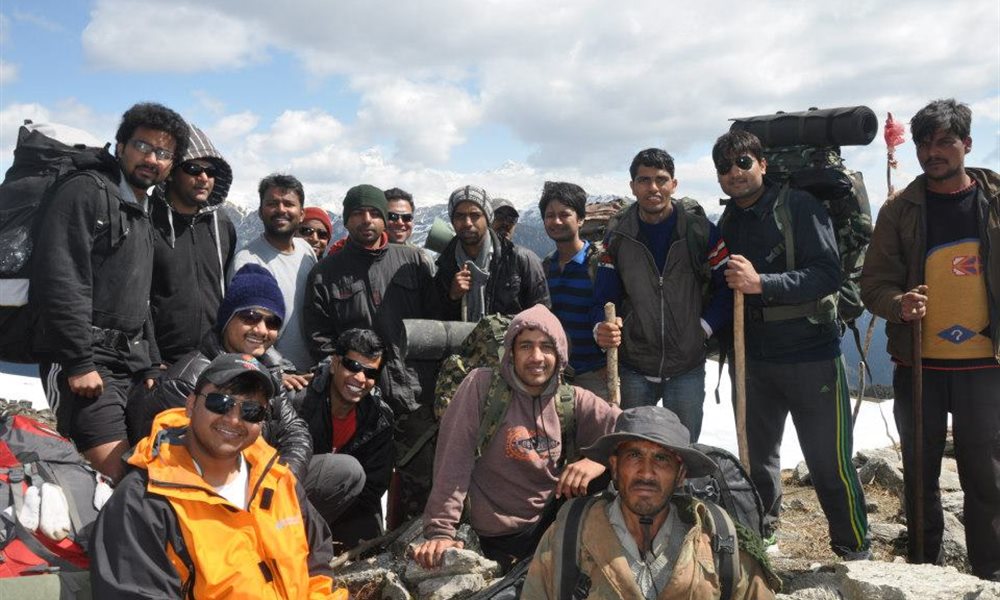 And so ended the night.

The next day started with a hunt to find a dump. (for those who are smiling..please try putting your bums into a refrigerator) . Which thankfully all of us did . Had the awesomest coffee ever and started off on the small climb over the peak and back to Ghaurmanda.

Low rolling plains but the same old nemesis ..snow! Frankly , more than exhausted I was getting bugged and bored. But a man's got to do what he got to do. We kept trudging back and somehow as it always happens the return route seemed so much longer to Ghaurmanda.But we did reach in time..

It was like return to our hotel rooms. Tents got pitched by magic.The stones around the fire got arranged by magic and tea appeared again by..magic.

We saw the sunset from Ghaurmanda (poor Manish had been cribbing about that sunset since we had reached Ghaurmanda late the first day). Animated discussions followed late and we retired.. 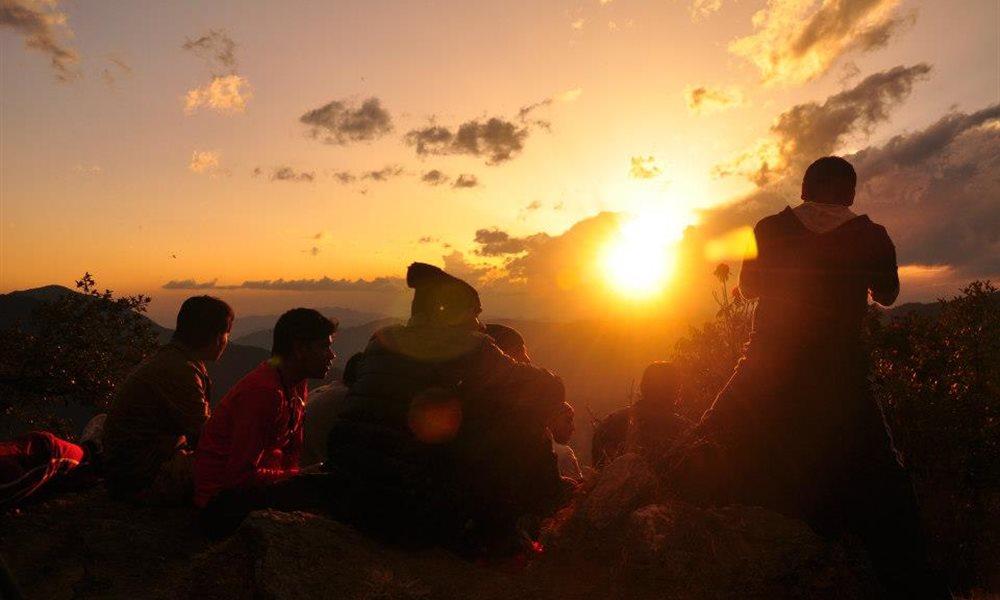 Next day a crisp breakfast and we were out to reach Guttu.But not before a perfunctory HOLI puja by our porters that warmed our hearts. Ankit and Bitto decided en route that they were in no position to face the charming ladies of Guttu in such unhygienic conditions(no bath for three days) and hence decided on a holy dip. Me and Ritvij were separated while Manish was nursing a watering eye(snow reflection in eyes) led by Rajat reached Guttu in afternoon. Only to find a self declared holiday.

A long ride back to Rishikesh followed by a great dinner. And we were on a bus to Delhi.... 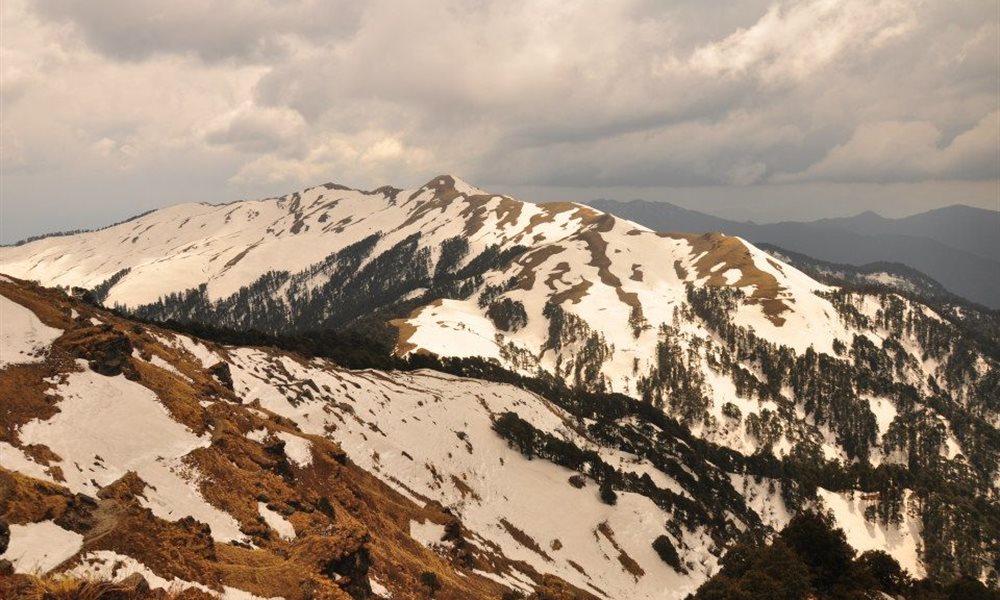 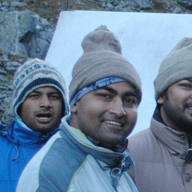 Long time ago in a small town of midland Orissa,a child was born to middle class parents.At the time Read more 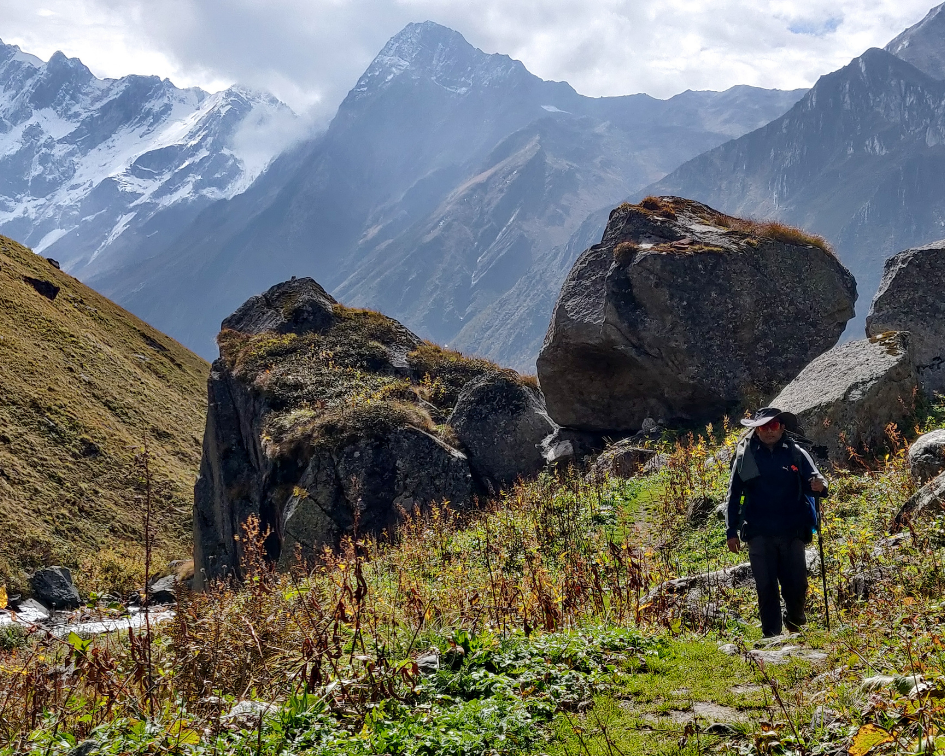 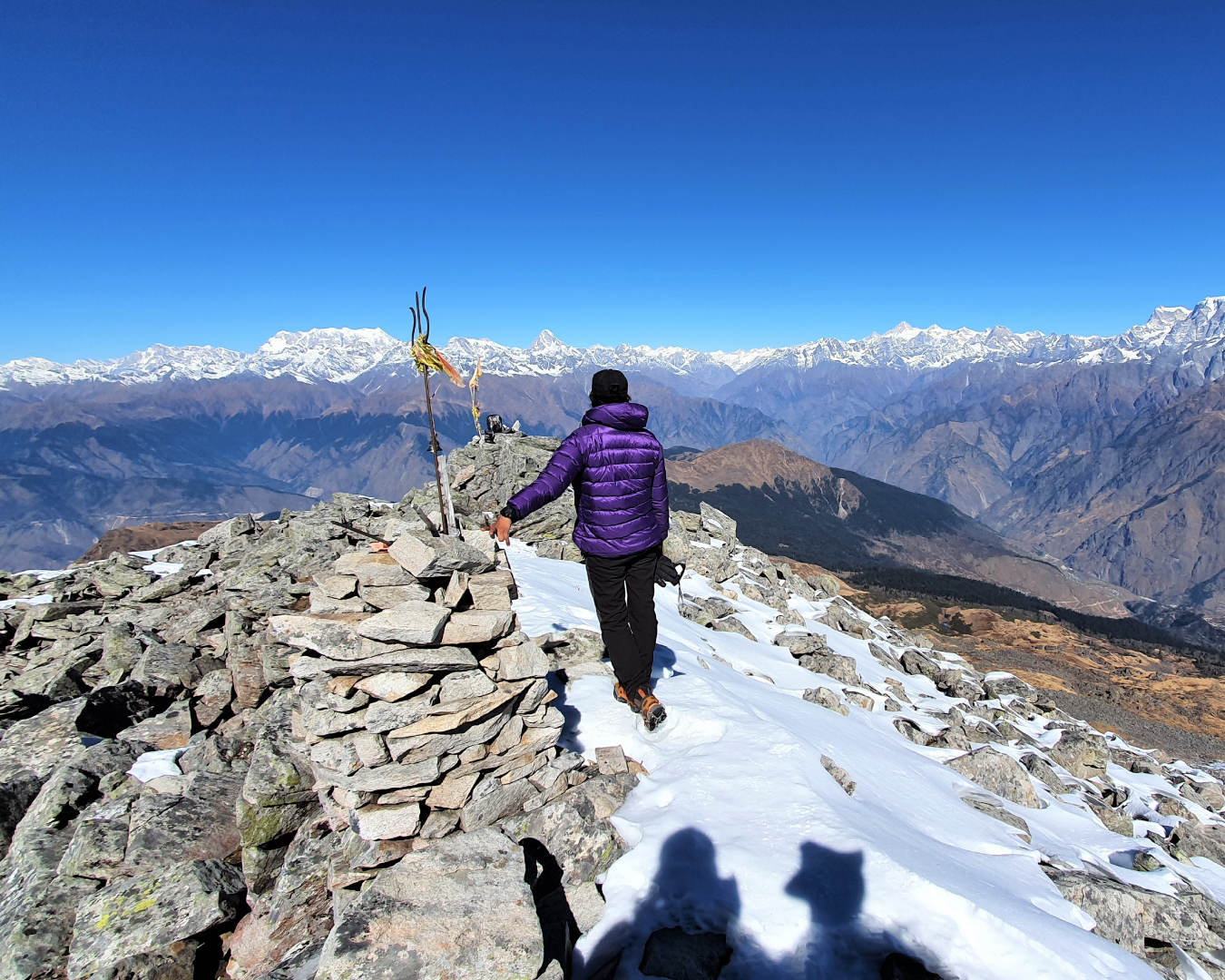 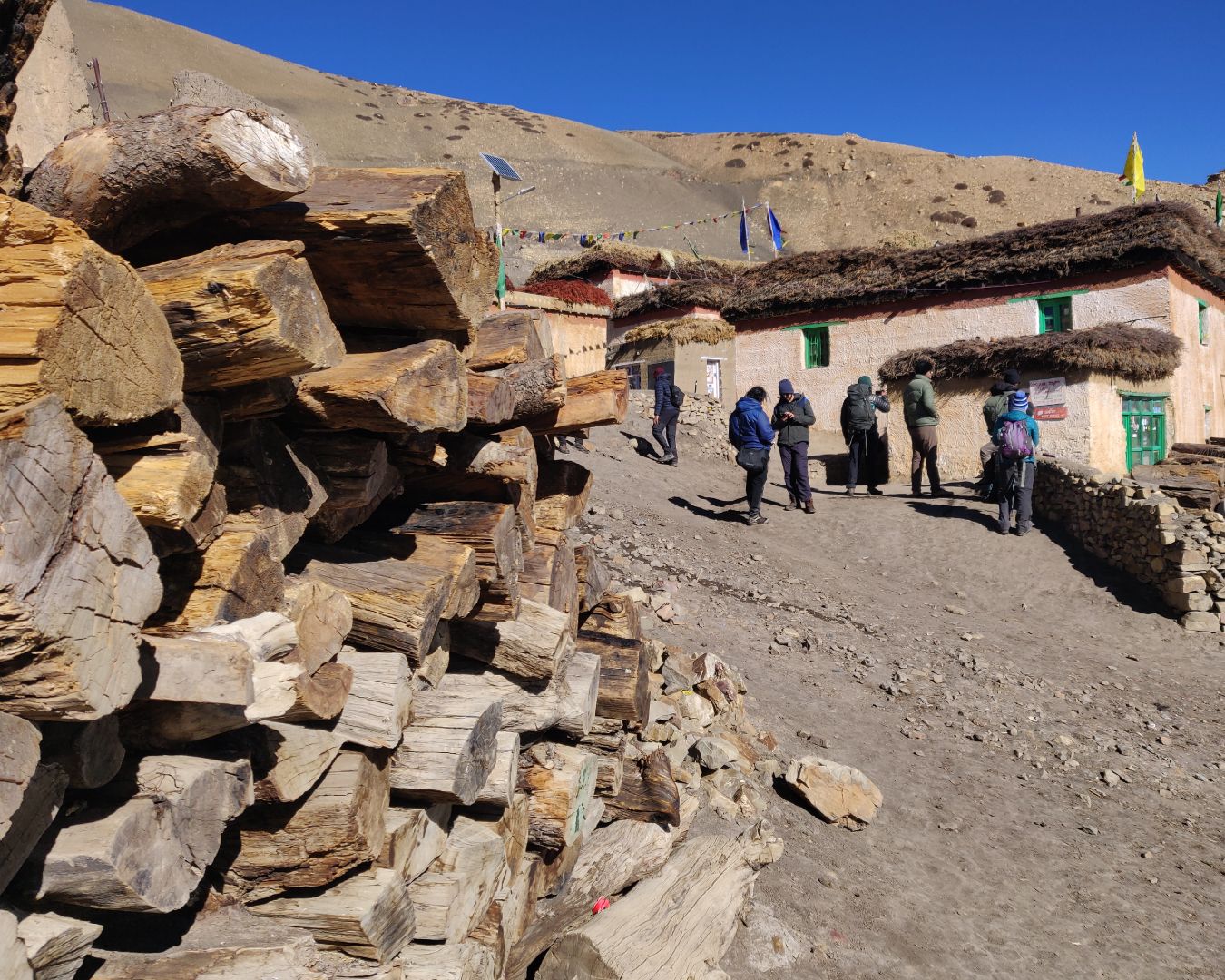 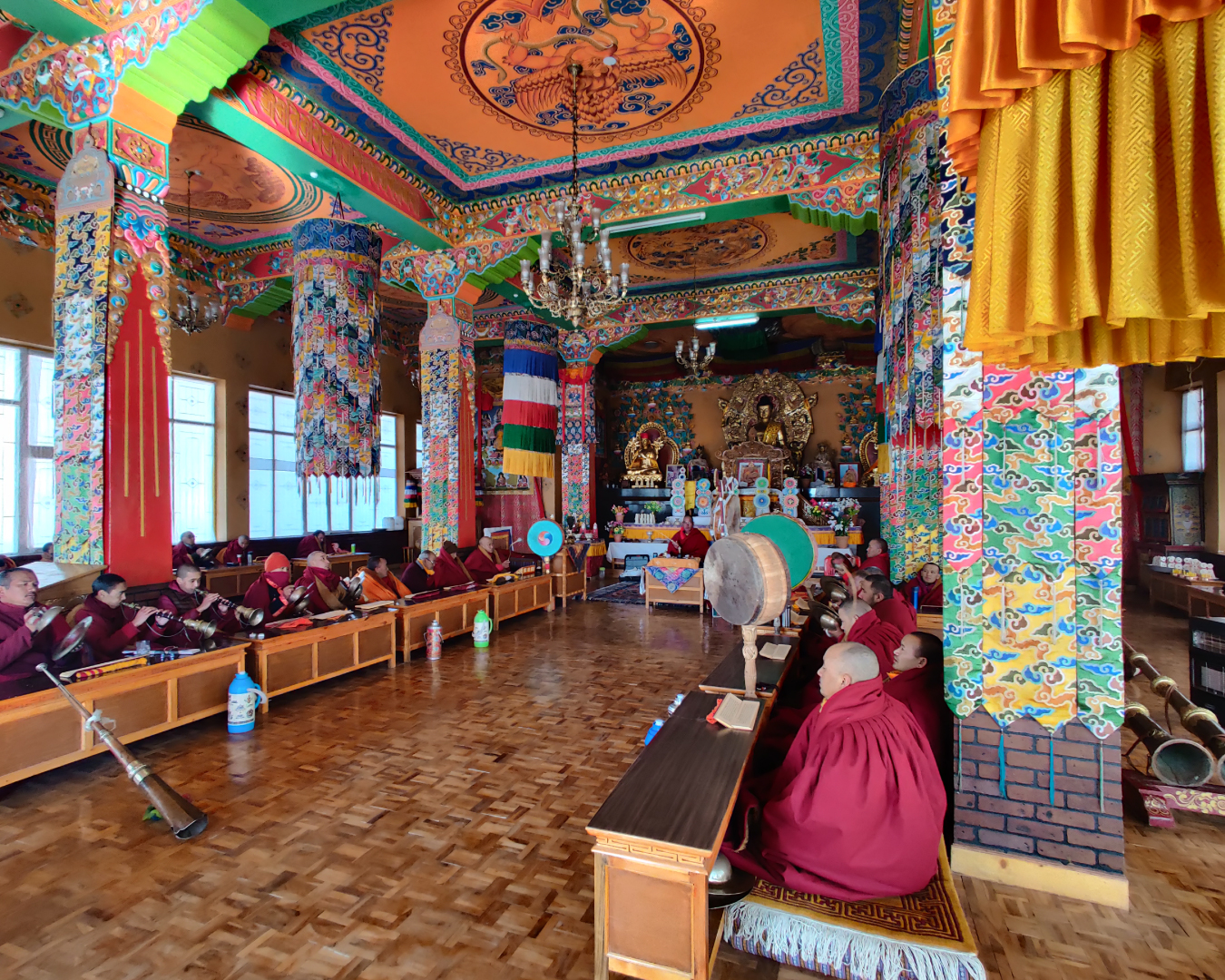