Learning to Fall (and get on the Ski Lift)

This blog is a little different from our other ones. It was written jointly by members of our Exploration Team, Sarthak and Cambria, each with their own voice and perspective on their adventure to Gulmarg, Kashmir to pilot Bikat’s new beginners’ skiing course. Find Sarthak’s words in the bold font and Cam’s in italics. What do you do when you’re stranded in Kashmir after a snowstorm? Head to Gulmarg, and learn to ski, obviously.

Honestly though - Sarthak and I had just completed an exploratory trip snowshoeing through Marchoi Valley, where the temperature averaged -20 degrees at night. Back in Srinagar, thawing from our adventure, it became clear that no flights or cars were leaving from that snow-covered valley anytime soon.

But sitting still didn’t seem like an option either, and before we knew it, we found ourselves barreling back up the mountainside in the short, 2-hour drive to the skiing capital of India, Gulmarg. After all, Bikat is opening a Beginners’ Ski course there - time for a skiing recce? I’d been trying to plan a trip to Gulmarg for the last two years, but between work trips, my humble bank balance and a recently repaired, ten times dislocated shoulder, it had never materialized. Naturally, we jumped on our chance at this three day ski vacay.

The only caveat here was, none of us yet really knew how to ski. At all. Ambitiously envisioning ourselves speeding down the Gulmarg Gondola’s Phase 1 slopes within the next three days, we checked into our hotel, skipped breakfast, and had a friend hook us up with an instructor.

A quick trip to the rental shop, and we were on the bunny slopes. Surprisingly, we didn’t fall even once in the first three hours, and our instructor, interpreting us somehow as exceptionally talented beginners, advised us to move to a steeper, longer run. That is when we started freaking out and falling. We were not, in fact, exceptionally talented beginners.

I will say, if you’re not willing to crawl out of your comfort zone a bit and wake up each morning accepting the fact that you will most likely fall on your butt several times today, hard, then this is not for you.

But i can also promise you that if you don’t give it a try, you’ll be sorely missing out. Skiing is something I never realized I was missing in my life until I found myself slowly but surely, knees wobbling, picking up speed in my newly-learned snowplough position and controlling myself to a stop at the bottom of the hill.

Didn’t fall. I’ll take that as a victory.

And after hiking back up the slopes all day long just to glide right back down, I have to say that sipping a hot cup of Kashmiri kahwa under the electric blanket in our cozy log cabin-esque hotel couldn’t have been a better way to wind down and defrost at night.

But we couldn’t sit still for long, there were skills to be practiced, slopes to be conquered and we bolted out of the hotel by 8:30, trying to be the first ones back to the ski shop and out onto the slopes. 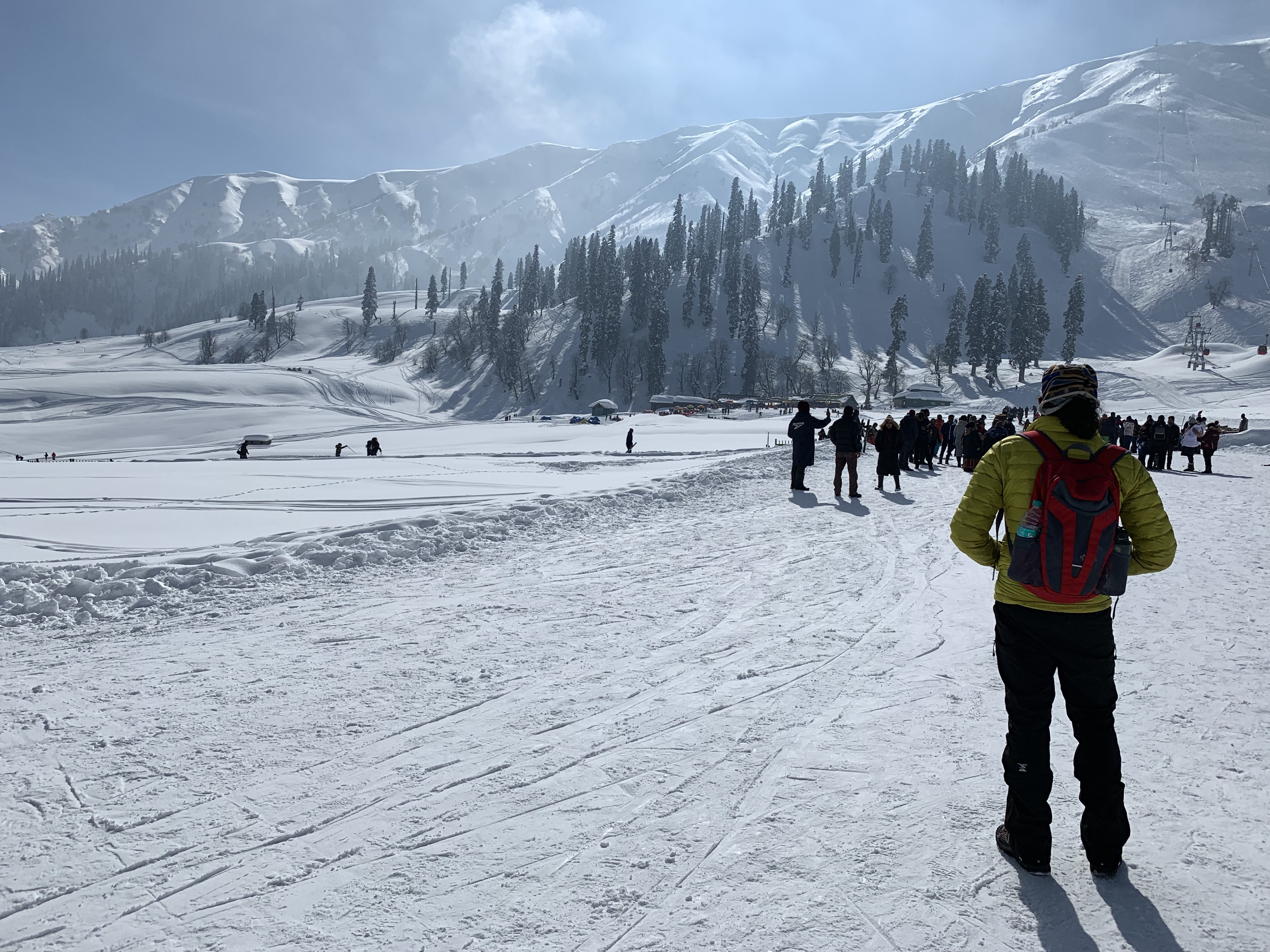 We demoted ourselves back to the bunny slopes the next day, figuring we could get better at our turns if we weren’t afraid of somersaulting into the snow. Though it’s counterintuitive, the secret to not falling all the time is to make sure your shins are always weighted onto your boots - I guess there’s a reason ski boots are as big as a small dog, and weight just as much.

It can be a little tricky, but a large part of getting around the fear of adventure sports is to trust your equipment. You will not topple over your skis. The rope will not break. This huge piece of fabric is meant to fly. I thought I had learned this lesson well after having learnt to climb mountains and fly a paraglider, but it still took me more runs on the bunny slopes than I could count to trust the skis.

Finally having conquered the 10°, 30 m run by the end of Day 2, the agenda for the evening was to find a beer. We had been burned the day before, so we decided to take matters into our own hands and made it to one of the few hotels that have a bar in Gulmarg, maybe even all of Srinagar. As we grabbed our beers, we were hushed into a small glass cabin next to the bar, the only unheated part of the entire hotel. I guess beggars can’t be choosers, right? In any case, it tasted just as good- we had earned it, and we spent the evening debating with some friends who had also come to Gulmarg after the snowshoeing trip if attempting the route down from Phase 1 was even remotely a good idea.

They were all for it. We were starting to feel much more confident, and excited that we were finally skiing fairly smoothly, but we still weren’t sure if we were Phase 1-ready. We decided to ask our other friend in Gulmarg, Aashima, who was a regular and a pro as far as we’re concerned, what her thoughts were to make a final decision.

It was settled then, we would just have to come back. We caught ourselves wondering if we would have been able to head up there if we had been able to stay the full length of Bikat’s course rather than coming back after three days - but there was no use dwelling. Tomorrow we would test our new skills from the top of the Highland Slope, a steeper, longer, much higher slope that we had kept in the corner of our eye the past two days. Time to take her on.

After warming up on the bunny slopes a bit, we headed to Highland, and immediately fell over attempting to catch the ski lift.

“If we can’t even catch the ski lift, how in the heck are we supposed to make it down this huge slope?” I thought to myself.

Laughing, we got back in line and thankfully made it up to the top this time.

Oh wow. It looked 4x steeper looking down at what we were about to do.

“You first,” said Sarthak, giving me no choice but to suck it up and go.

Muttering a sarcastic, “oh thanks,” I pushed off, made it halfway down the first steep hump and tumbled. Sarthak did the same. We climbed back up. This time, I think we both had gotten the initial terror out of our systems and began moving forward and down once more. Slowly, controlled, faster, faster, faster - oh crap, too fast - and then our practice over the last two days kicked in. We widened our snowplough stances, leaned onto our boots, looked forward - and made it. 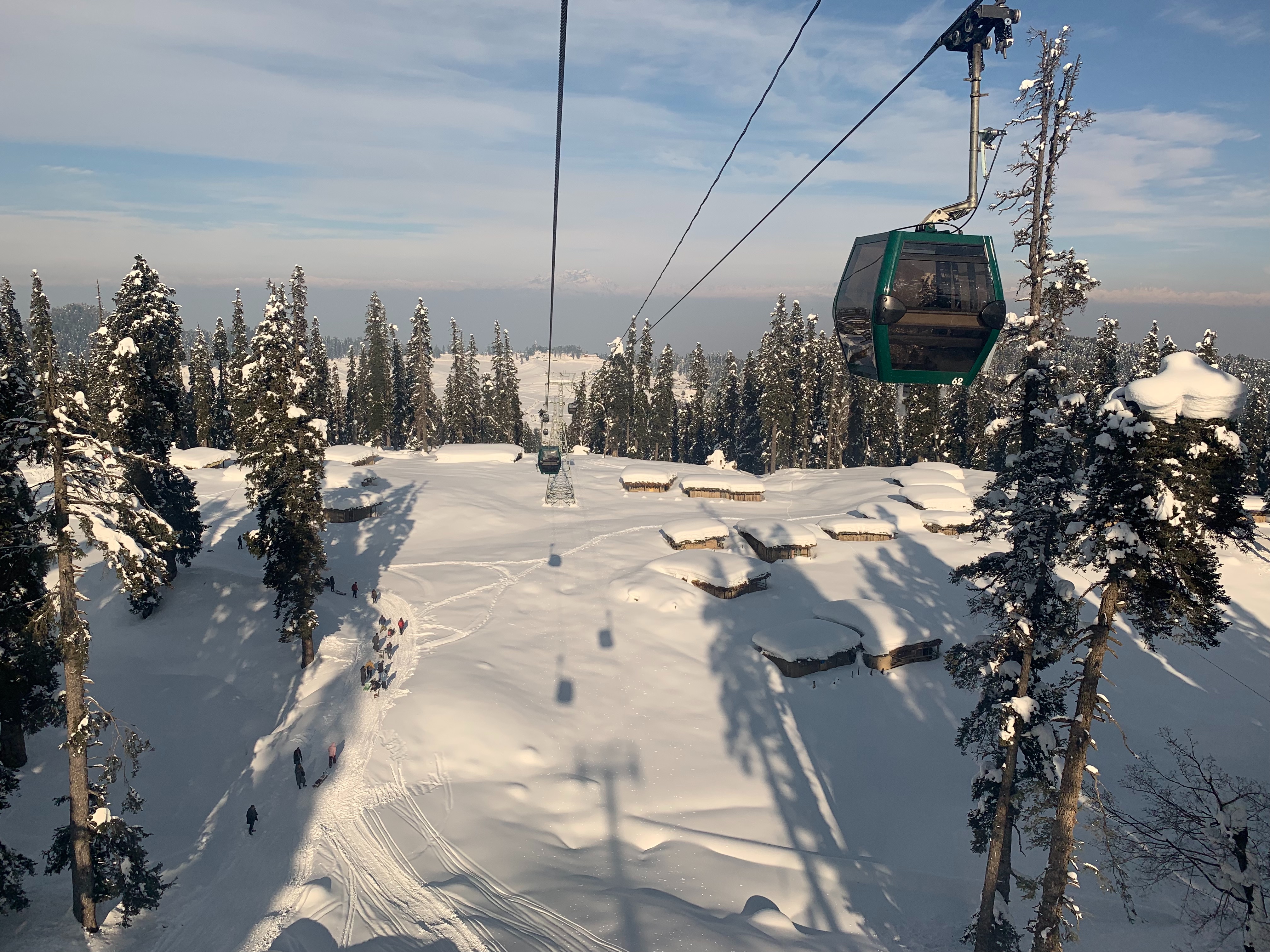