Crazy is a Good Thing : What the Mountains did to me

We trek so that we can go a little crazy. After all, who willingly gives up their time and precious breath to go wheezing up a mountain's incline, showerless and devoid of our precious internet- all the while alongside strangers?

But then again, wouldn't it be crazy not to do just that if it puts a bigger smile on your face than anything else in the world? 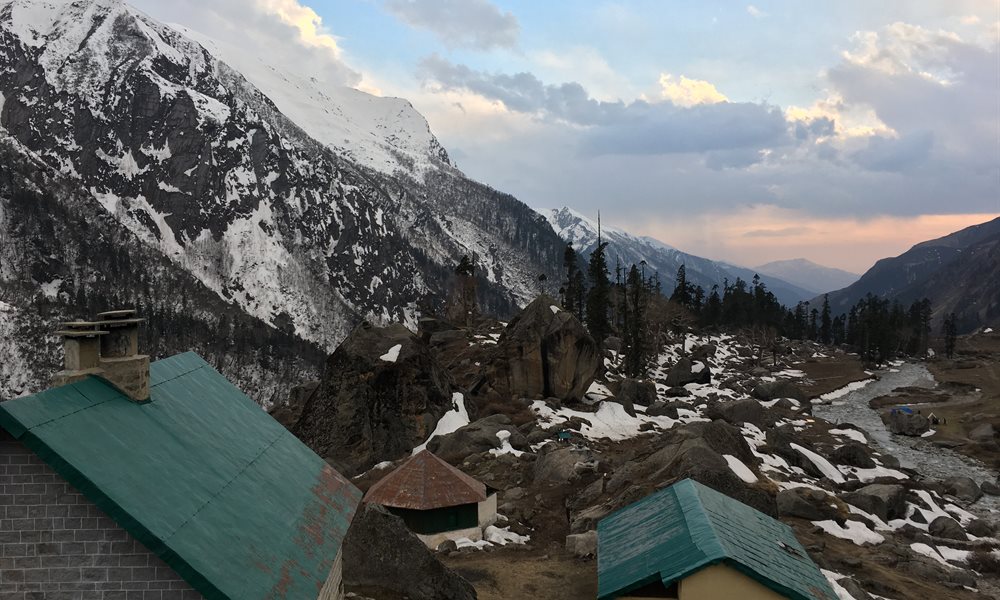 Your inhales taste sweet from the oxygen and scent of pine.

Your phone can't hold you back any longer from the peace of mind you were always meant to have.

And those strangers- this quirky crew of nature lovers tripping over rocks that you find yourself surrounded by- become your family forever.

Yeah, I didn't think so.

And because of this love for those crazy mountains- I now find myself in the back of a jeep, hurtling through the Himalayas to our trailhead for the supposedly-stunning trek, Har Ki Dun, grinning from ear to ear.

Time to see it for myself.

My newfound companions and I introduce ourselves to one another, and then immediately forget everyone's name but our own. We burst out laughing.

As we ascend into Sankri Village for the night's pre-hike cabin stay, we find ourselves nestled at just under 2,000 meters. The purple shadows of Himalaya hiding at dusk tower around us. As we fuel ourselves with pakora, chai and good laughs at each other's expense, we eagerly eye the peaks that our feet will soon take us to the tops of in the morning... 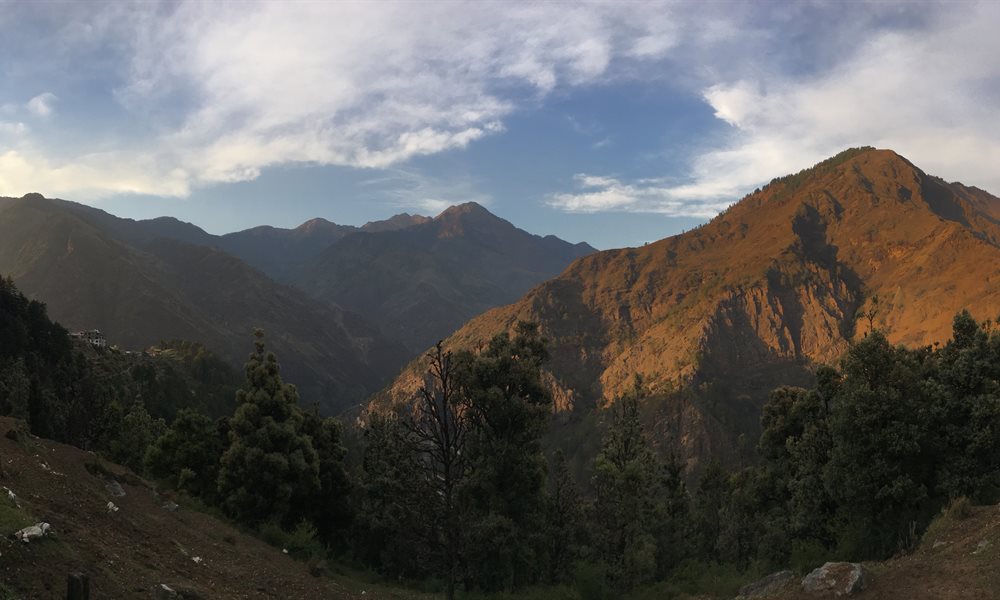 "Chai, chai, chai!" Wakeel, our trek leader, calls out to wake us.

On a chilly morning, those are some magic words. We pop our heads out the door one by one like gophers to verify that there is, in fact, a steaming hot kettle of chai waiting for us.

Just like that, it's time to go. Jeeps and tummies loaded, into the transport we pile one by one:

Nitish and then Jenisha, for her first trek ever, Rahul and Dinshaw- old friends from a previous job, Aditya who always seems like he's thinking about something very important, Shashwat with his camera, and Alexis and Maxi- the French-German power couple, all with one goal in mind: hike the Valley of the Gods. 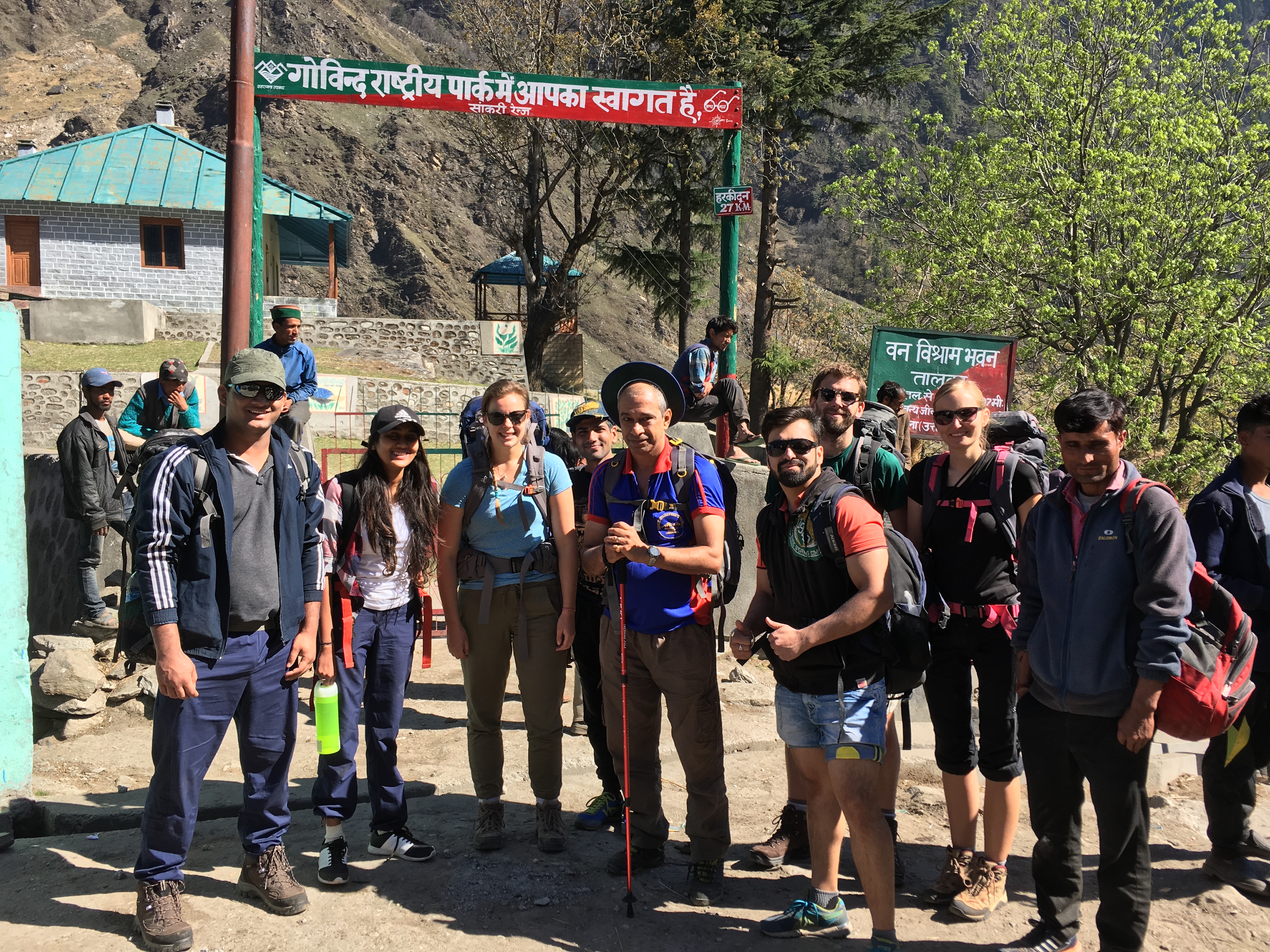 We head out toward our trailhead in the pine-studded village of Taluka, and shepards dart in between the aged wooden houses, famous for their termite-resistant Deodar wood, with their herds of goats and cattle.

It's like going back in time, and I feel strangely from the future in my bright red jacket and neon purple backpack (which I've lovingly named Florence, if you care to know).

And then it is just us, our packs and the frothy Supin River to keep us company as we follow a shaded trail, with a roof made of rhododendrons.

Of course, it wouldn't be a hike if we didn't also occasionally break into a horrendously out-of-tune version of "Bohemian Rhapsody." Or sing the guitar solo from "Don't Stop Believing" at a 45 degree incline.

Eight lush kilometers later, we pause by the river for lunch. Laid into the opposite bank is the village of Gangar. Mouthful of jelly sandwich, I bust out laughing at the girls across the river whose dance moves for us, even hidden under their heavy woolen tunics, are so ridiculous I almost can't swallow.

Something mysterious and wonderful happens when you hike. Everything you eat, including jelly sandwiches, tastes like it's been touched by the Gods.

It's true that the best dining room is one outside. No chair or table, just a nice rock, a view and the sweat to prove you earned every delicious bite.

The trek pauses for the night in Seema, perched along a gushing piece of the river that we immediately run and stick our feet in.

Which we then immediately take our feet out of.
It's like instant frostbite from the glacial runoff. We spend the next 30 minutes dipping our feet in and yanking them out like weirdos, simultaneously loving and hating the tingling feeling it gives our toes. 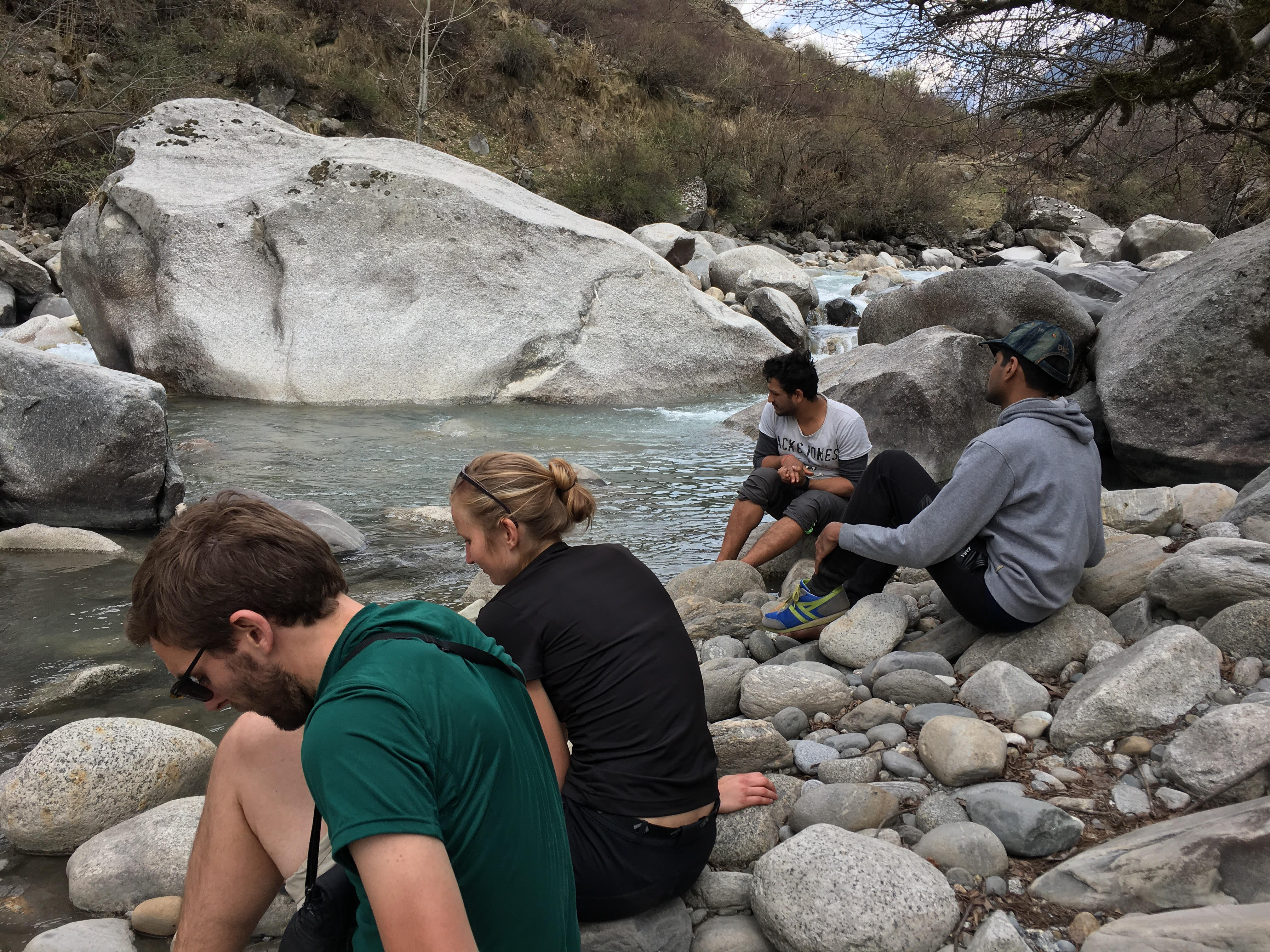 Wakeel gathers us round, and we stretch out our muscles, counting out the sets in our respective languages. Hindi, English, French and German- I find myself thinking how cool it is that the same thing brought so many different people together.

The sunset herds us all into the dining tent for a well-earned feast, followed by round after round of card games until finally we are lured back into the chilly wind by the crackling sound of a bonfire. 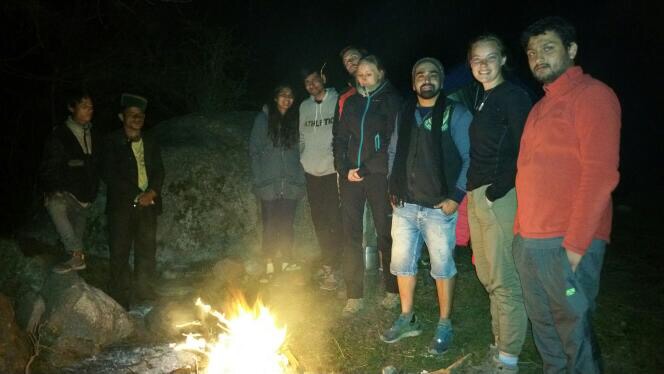 Embers fading and eyes drooping, we snuggle into our little camp on the mountainside and fall into the kind of heavy sleep that is only earned, never given.

We know the drill.

The Supin falls far below us as we rise up a thickly-vegetated gorge. Kilometers later, this thick brush gives way to snowcaps and pines, a panoramic lunch spot, and an ice-cold waterfall for the most refreshing refill of your life.

We cross crumbling bridges, gain the acceptance of a herd of goats, indulge in several of the mountainside chai huts and keep climbing. The trees grow sparse, the snow on the higher peaks around us glitters, and suddenly Har Ki Dun is before us- jagged and magnificent and worth every blister.

Even the donkeys are impressed, rolling excitedly around in the dirt upon their arrival. Inspired by their enthusiasm, we too rolled around in the dirt for no reason. Just kidding, we definitely did not do that- but we did have an impressively spirited Punjabi-style dance-off.

Moves were busted. Rahul won, hands-down (or I guess hands-up, technically). We forgot to be cold.

Liberated of our heavier packs, we set off across a wide-mouthed valley drooling with streams and up to feast our eyes on Jaundhar Glacier that lay above us at 4,200 meters.

You know you've made it as a crew when you laugh at them instead of check to see if they're okay when they fall on their behind (with love, of course). Slip-sliding like fools, hop-scotching across rock ridges and occasionally falling hip-deep into snow drifts- we determinedly pushed upward, ruthlessly making fun of each other's slips until the teaser wiped out too from not paying attention.

Karma is a sly little thing. 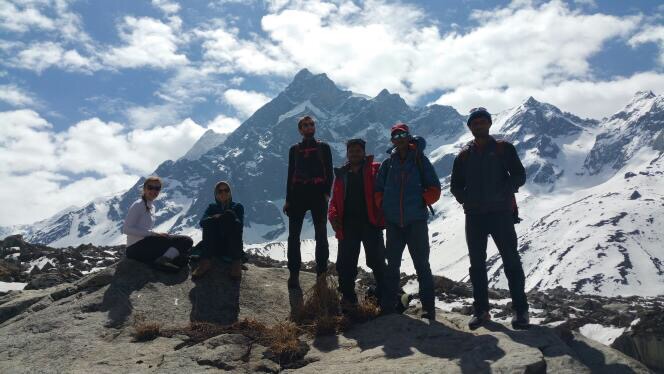 Not to be left out, black clouds rolled thunderously up the Glacier slope from the south.

Deciding we'd prefer not to fight a blizzard, we snapped a victory photo and made our descent- testing our ability to catch snowflakes with our tongues without gracefully faceplanting into a snowdrift.

Our decision was well-timed. I will refer to the events that followed as The Freeze.

Snuggled into our warm sleeping bags, muscles happily aching, The Freeze, in all its fury, came down upon us.

The wind and hail ripped at the tent, thunder and lightning seemed to reach out of the sky and snow came down in blankets so thick, Wakeel came around at 4:00am to shake everyone's tents free of the forming igloo shell like some yeti superhero.

Between cracks of thunder I hear, "psst, Cam... I'm scared."

I had forgotten that this was Jenisha, my roommate's, first snow, first mountain, first tent. She was taking it like a trooper.

We layed there in the darkness between lightning bolts as I taught her how to count the seconds between thunderclaps and lightning strikes to determine the distance away of the storm. We counted together.

"See how it's farther apart this time? That means the storm is moving away from us now," I say.

Two foggy sighs of relief filled the tent, and, while I couldn't see her face, I'm pretty sure two smiles did as well.

The next morning was a powdered sugar wonderland, and the first snow for our South Indian crew members. Our 10-person trek group of fully grown adults immediately morphed into a pack of screaming children, hurling snowballs at each other and ducking to avoid a face-full of ice. 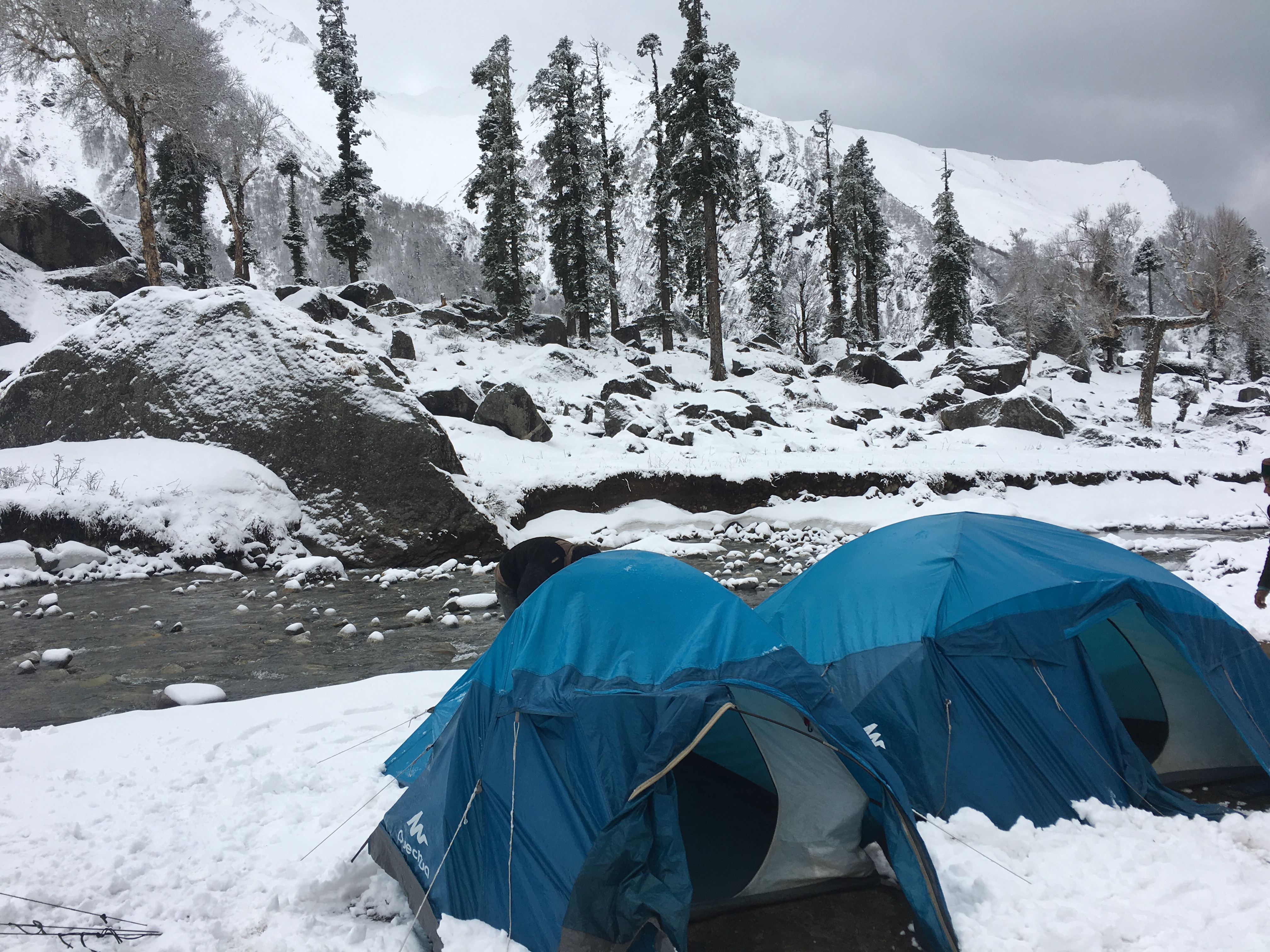 Feeling the chai thawing our veins, we make a mad dash back down the way we had come two days before- trying to make it to Seema before the clouds forming above us decide to drop their weight.

Note to self: you cannot outrun a cloud.

Snow turned to ice cold rain as we descended, drenching our shivering bodies to the bone and yet, somehow, we couldn't help ourselves but laugh.

We laughed at each other's wildly wind-tossed hair. We laughed at the funny squishing sound our socks made. And we laughed when we huddled around a tea shack man's fire, shoving our bums as far-hanging over the fire as possible without actually becoming the fire.

It, and we, were a ridiculous, perfect mess.

Wakeel announces, with that ever-present grin of his which makes him look like he's up to something, that since all of our belongings are wet, we will be staying in a cabin that night rather than tents.

Motivated by the prospects of dry blankets and warm socks more than I ever thought we could be, we hike at record pace down past Seema to a simple wooden rest house.

Tonight, it was the Taj, for all we were concerned. Our little trek family, now happy and warm, waddled around with massive blankets draped over our shoulders amidst a chorus of satisfied "mhhmms" and "ahhhhs" at our newfound bliss.

We downed bowl after bowl of soup, giggling and sharing our favorite embarrassing stories of each other from the trek.

With one final push the next morning, our thawed bodies climbed one last hill into Taluka, and suddenly- it was over, just like that.

You see, treks have a funny way of sneaking up on you like that. You go in all gung-ho, ready to take on the mountain. But what you don't realize until you've come back down and are enjoying the feeling of sitting still for the first time all week- is that actually took on yourself.

And suddenly you're sad it's over- you can't wait to do it again, because it was wonderful and painful and gorgeous and made your toes hurt- and it was crazy.

And you wouldn't have it any other way.