Hampta Pass Without Rain? No Chance

HAMPTA PASS WITHOUT RAIN? NO CHANCE

2 days of sunshine and I was already framing the title of my upcoming blogs on Hampta: ‘Hello Sunshine from Hampta Pass’, ‘Sunkissed Hampta Pass’ were some considerations, but how could a trek to Hampta Pass be complete without a little rain and snow? I experienced it all, and in abundance.

The moment I realized I was going to Hampta Pass, I got excited because I had heard a lot about its beautiful landscape. At the same time though, I was skeptical about doing this because I don’t want rain while trekking. Nevertheless, I embarked on my journey to Hampta on 23rd June with 15 amazing people who share the common interest of seeking adventure. 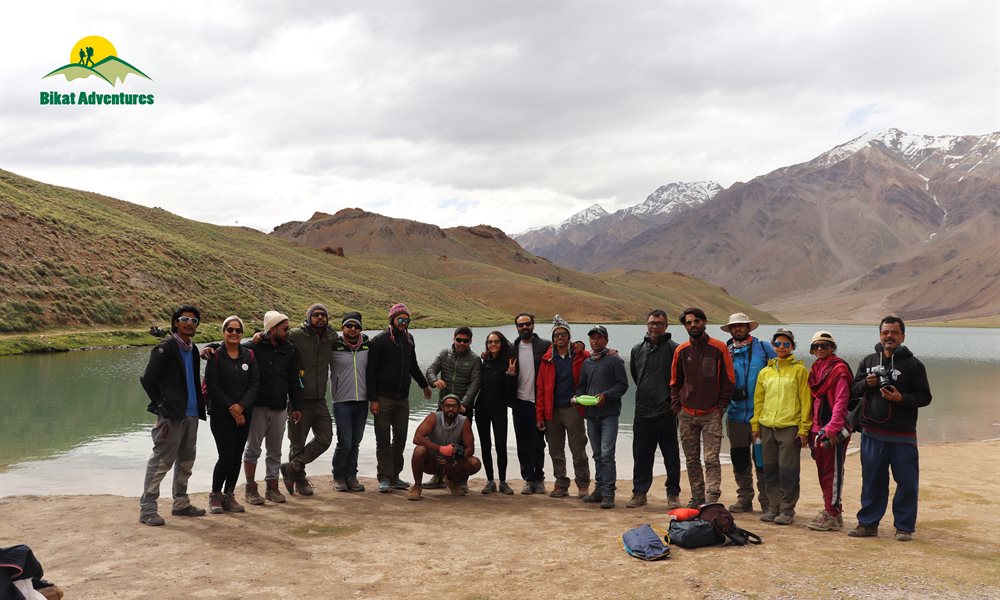 We had a cab ride from Manali till Jobra where we had a short introduction session. Afterward, we started our climb to our first camp site Chika.

It was drizzling and I was constantly praying for it not to downpour, but the misty atmosphere added to the beauty of landscape. Huge rocky mountains were playing hide and seek with clouds and we were walking amidst the green meadows holding on to our rain ponchos.

The day’s hike was an easy one and we reached Chika in about an hour. To my delight, the sky cleared up by evening.  We had lot of time with us which we spent absorbing the tranquillity of the place, sitting near the stream, exchanging stories while stargazing and learning about how to use a sleeping bag and pack our rucksacks. 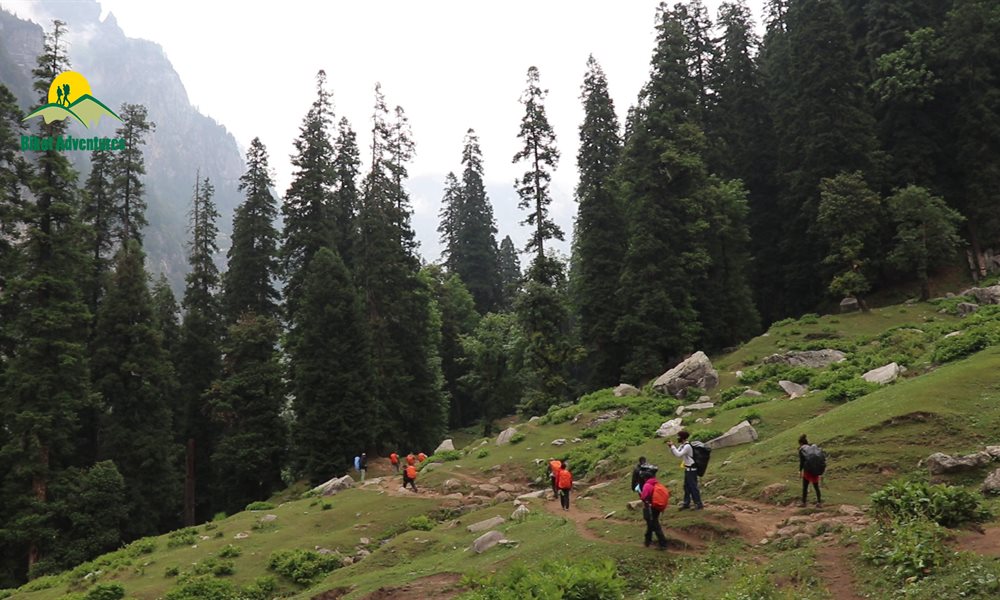 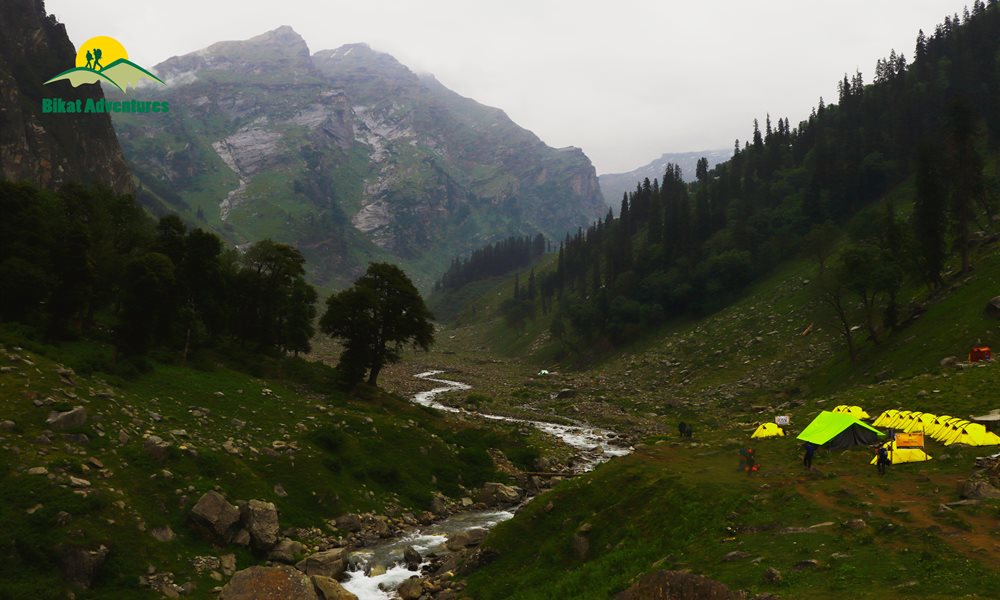 Sunlight broke in at the wee hours of the day and I whispered to myself ‘What a lovely morning it is’. After a few more photo sessions near the stream, and we started our climb to our next camp site, Balu Ka Gera. I was excited since I had read about this campsite a lot on the internet. The hike was moderate and wound through the green meadows and the grassland. The high altitude sunshine was burning our skin, but I would preffer it any time over rain. We had our lunch at Jowra and moved ahead to our camp site.

After a few hours of ascent we crossed Rani Nala. The water was bone chilling, but since it was a small stream, it was doable. Today’s ascent was of moderate difficulty level, and by the time we reached our camp site, we all were drained. The view from campsite however was spectacular and rejuvenated us. During this time, just one thought was on everyone’s mind ‘It was worth it’. We called it a day with the learning session on AMS, HAPE and HACE- important things for any mountain-lover to know. 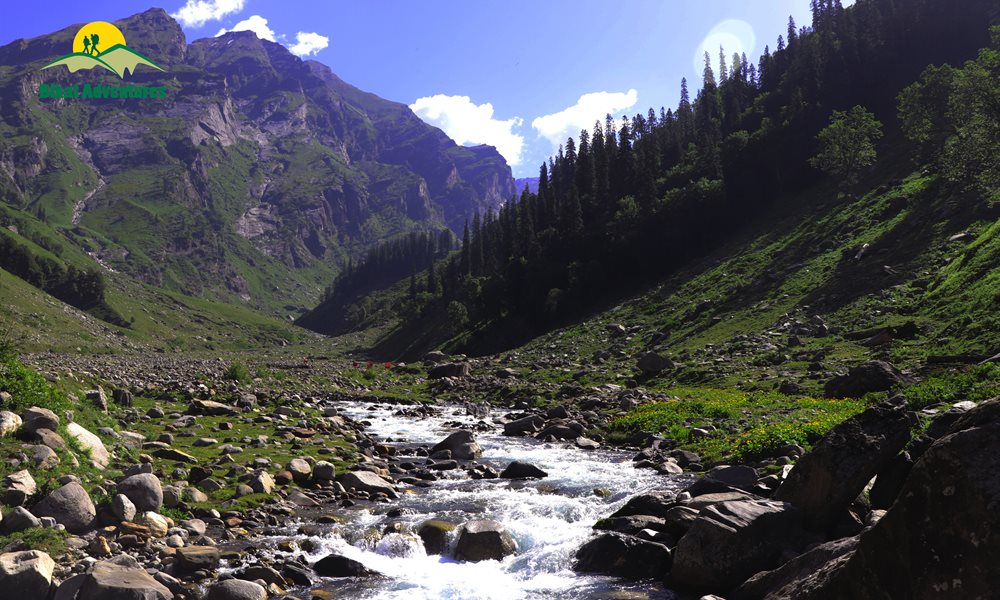 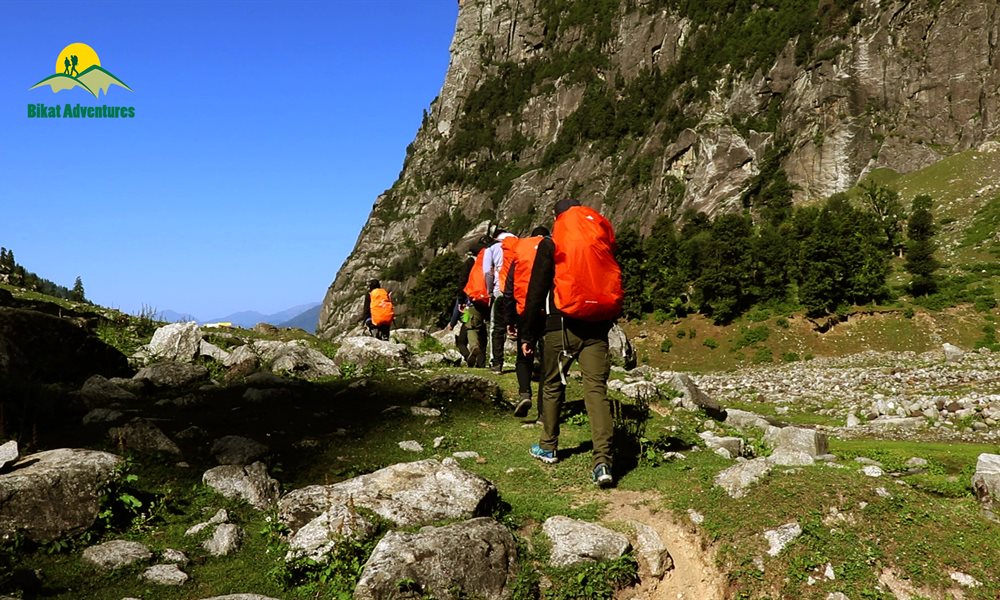 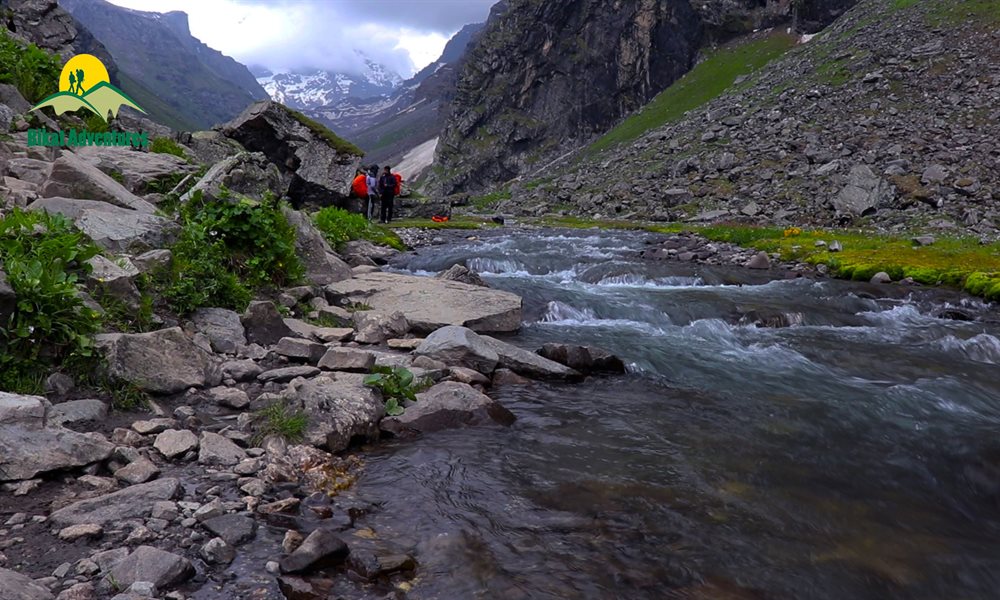 We woke up to a partial cloudy morning and left from Balu at Gera at 7 am. The rocky terrain slowly changed into the moraines and then a snow bridge. After 6 hours of ardous climbing, we were at Hampta Pass. But wait, it was not as easy as it sounds. We were drenched to the core, a hailstorm had hit us hard, we fell on the slippery rocks and only then we made it to the pass. It was an amazing feeling, standing straight at the Hampta Pass, drenched and still laughing, hugging and shouting. We did it.

The worst was yet to come. Due to heavy rainfall and hailstorm, the way down to Chattru was a test to even the best of the mountaineers. The trail was washed away, it was very slippery and we were thinking twice before placing every step. 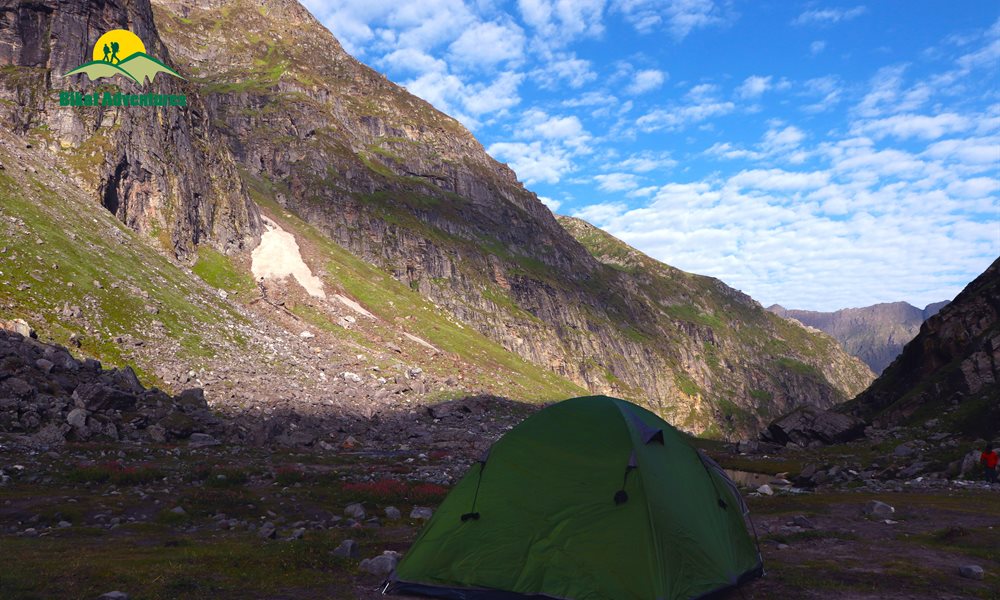 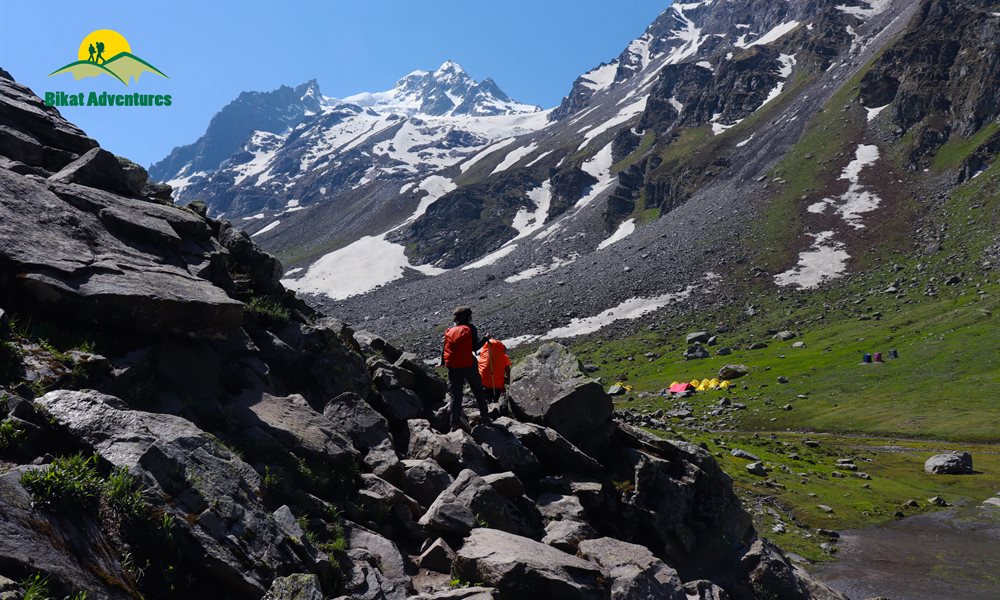 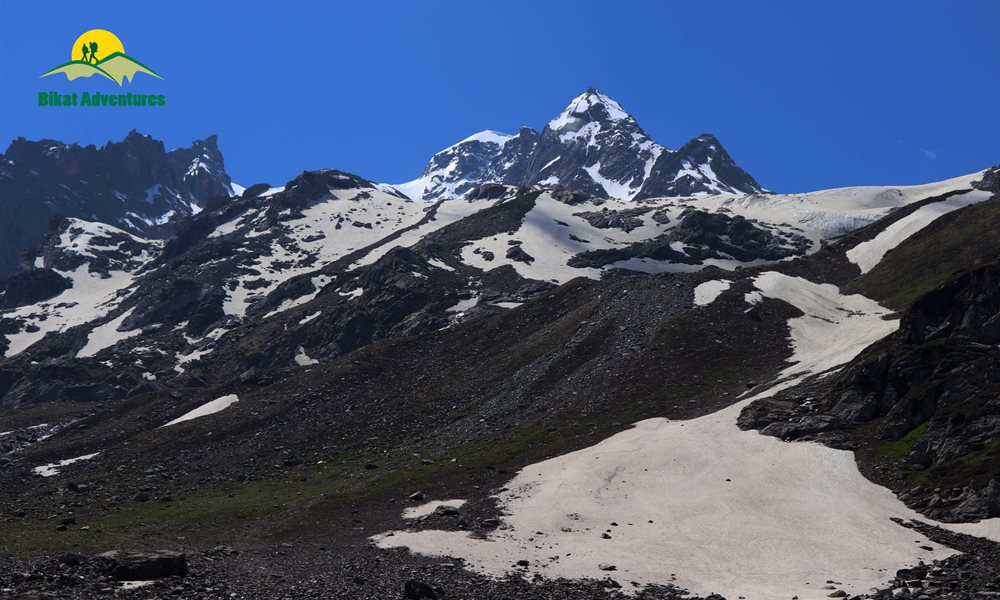 It took us 11 hours and each and every bit of energy to reach our next camp site Sheagoru. Despite of so much cold and the tiresome day, Sheagoru had the charm to pull us out of our tents. I took out my umbrella and had a long walk along the stream at this amazing camp site. 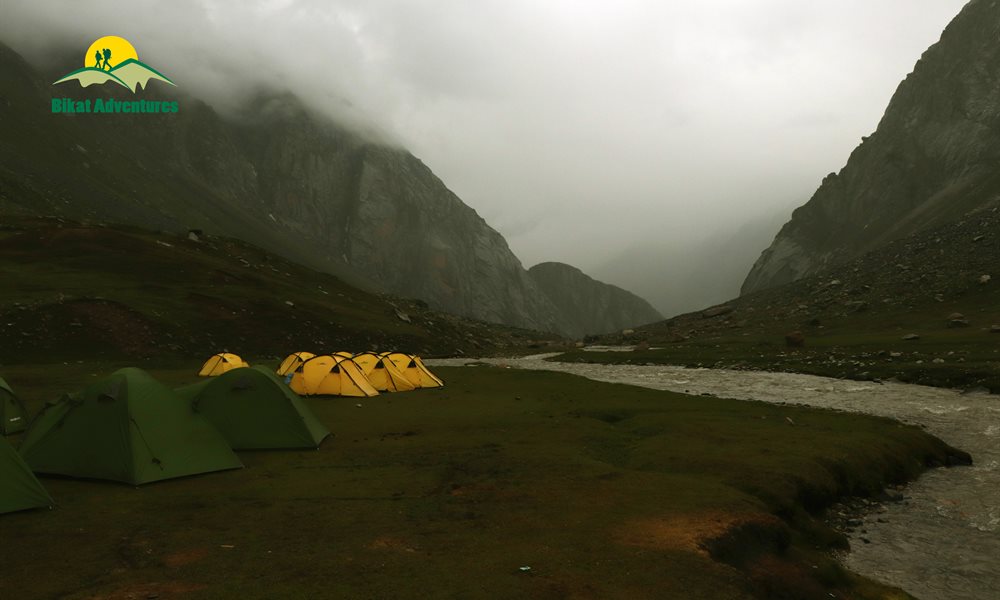 The first task of the day was to cross the stream that carried glacier water. We used the human chain technique to cross the stream. The ice cold water left us with a formiddable brain freeze for several minutes, but since it was a sunny day, we regained our normal body temperature within few minutes. Ascending from Sheagoru to Chattru took us 3 hours. It was a steep ascend but quite manageable. 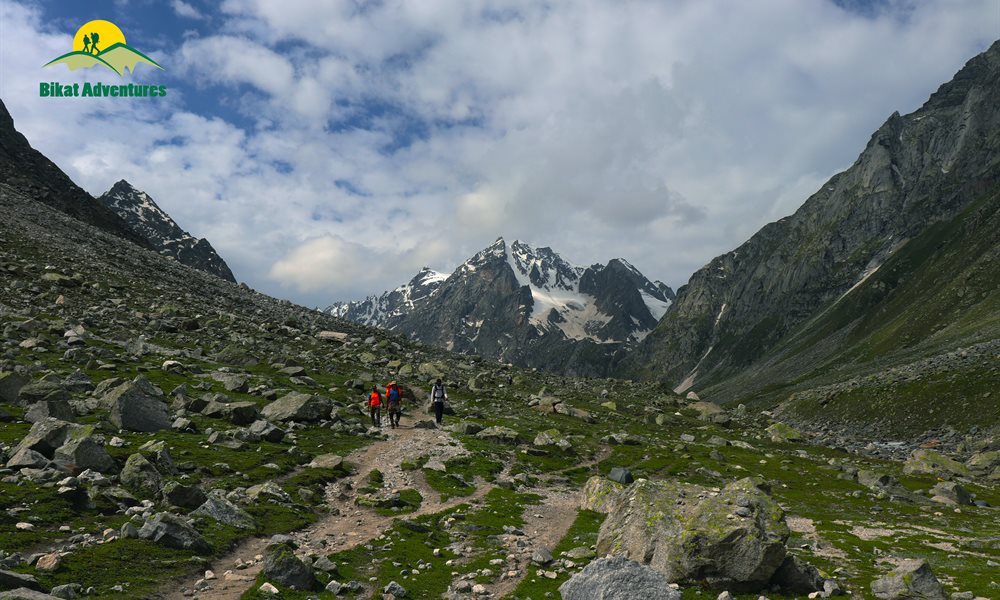 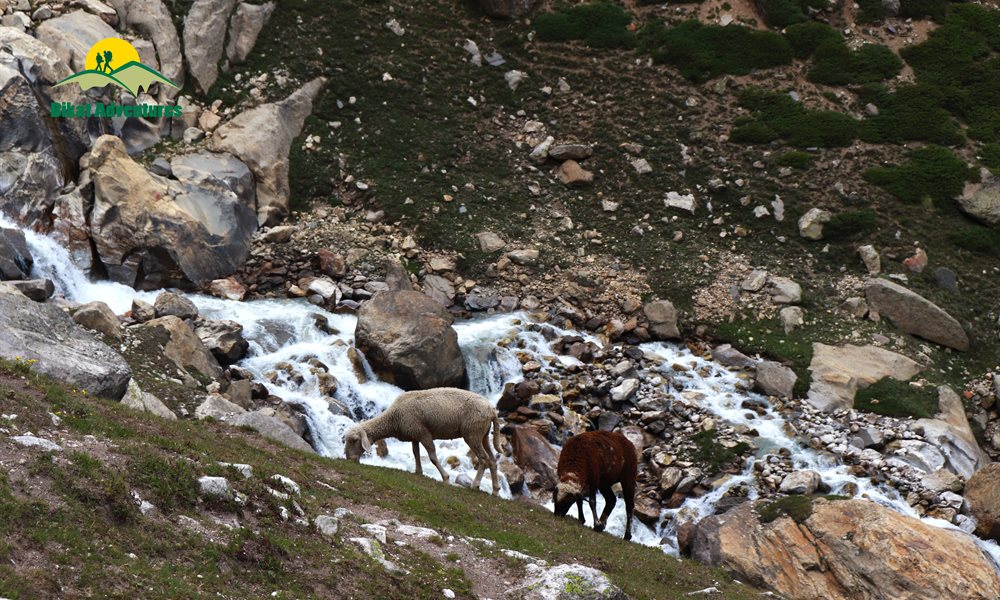 On the way to Chattru 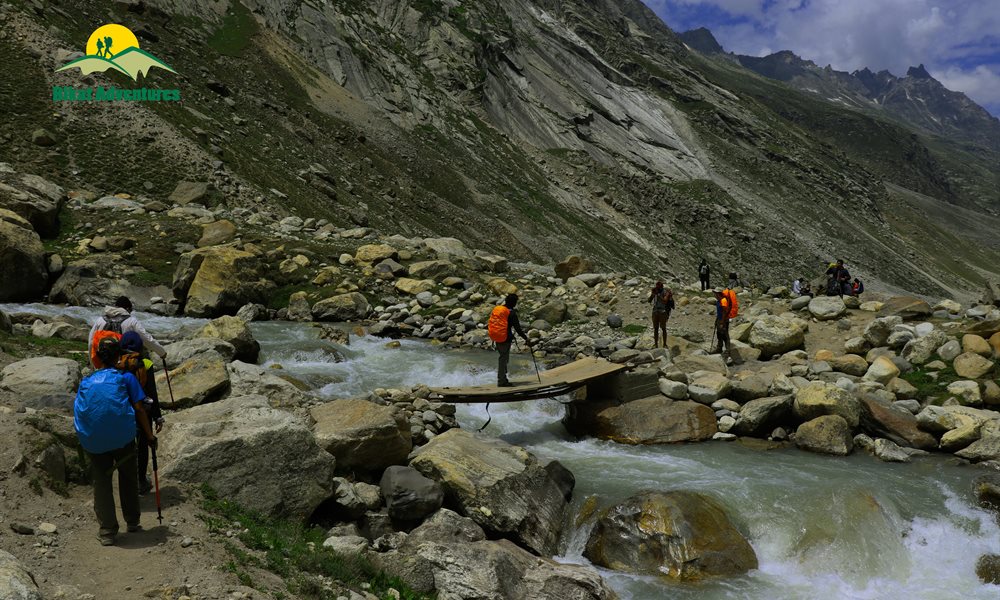 As soon as we  reached Chattru, we left for Chandratal lake, a major attraction in Spiti Region.I must confess, I went a little crazy when I saw the lake. It had pristine, bluish-green colour water. This lake also hold religious importance to the people if India. The roads were nearly absent and our cabs were driving as if they had never known what a road was, but it was fun. Visiting Chandratal puts a perfect ending to our Hampta Pass Trek. We reached back to our Chattru campsite at 8:00 in the evening. 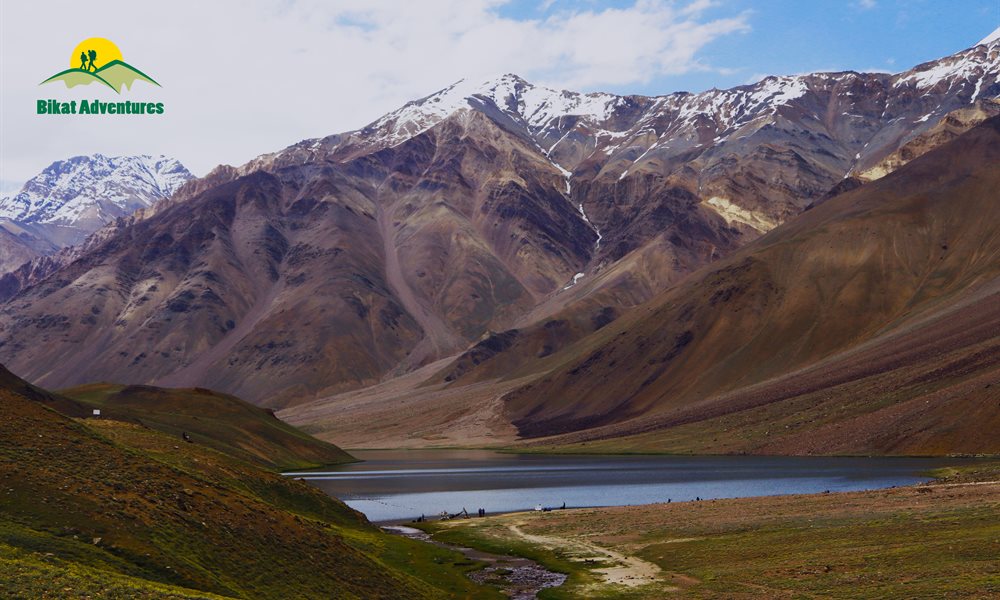 Finally the last day of our Hampta Pass trek arrived, and everyone was already nostalgic. The drive from Chattru to Manali along river Chandra was scenic, with mild monsoon showers and low hanging clouds that had become a familiar friend over the past few days. We reached Manali at 2:00 in the afternoon, and off we went to our respective places to reminiscence the memories we had created over past 4 days.

That night I slept, wishing I still heard the light patter of raindrops tapping my tent. Until next time, Hampta Pass. 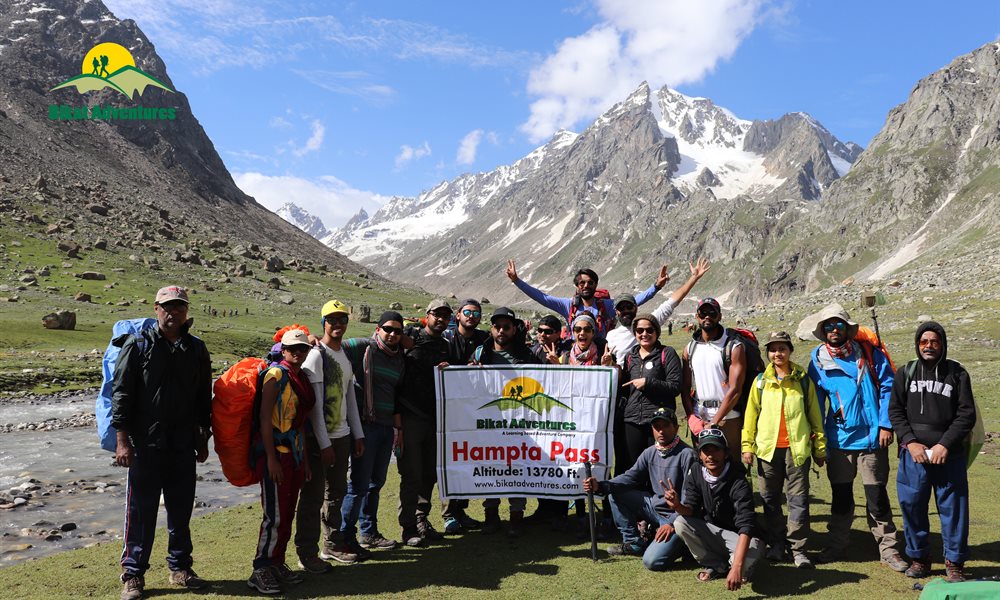