One thing that I have learned over my time trekking is that the experience is not only about climbing a mountain or crossing a pass, but it is also about the people you meet and the relationships you develop.

I met one such amazing bunch of people on the Buran Ghati trek that made our 7 days of trek memorable ones. 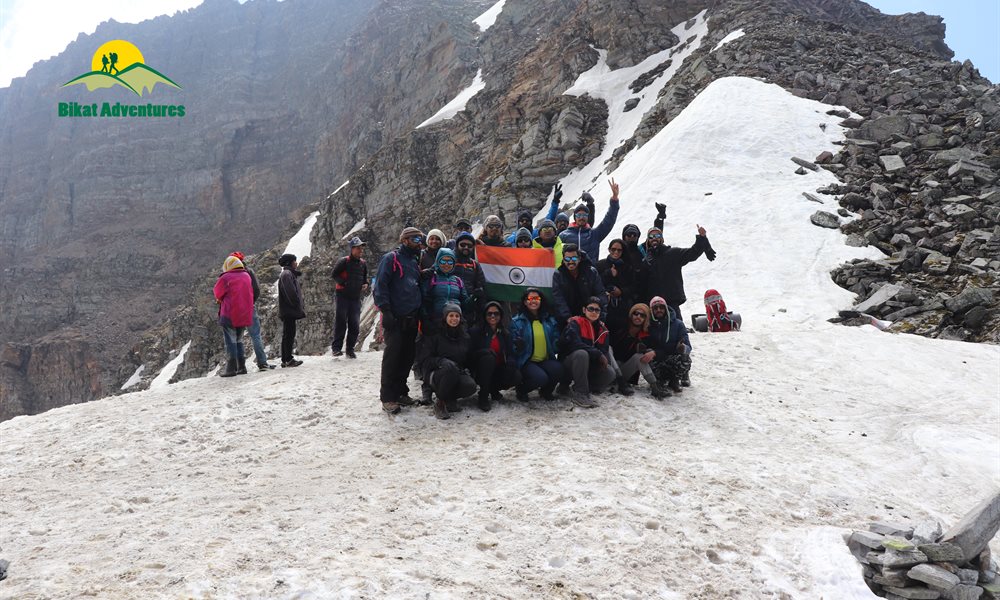 We boarded a cab from Shimla to Janglik which took around 10 hours to cover the distance of 151 KM. Super excited about the Buran Ghati trek, I was anticipating its beauty as was described on internet as we journeyed closer. We crossed many small towns on the way, but I particularly remember Chirgaon because our ride literally became a roller coaster after this town. Nevertheless we made it to Janglik by 7 in the evening and were welcomed with warm hospitality at Janglik home stay and a refreshing view of mountains. 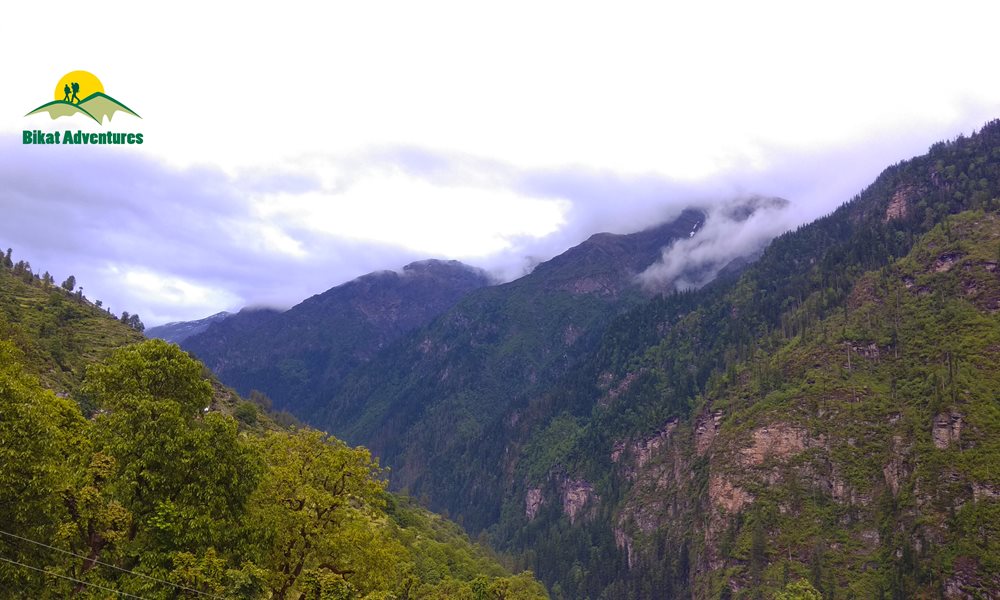 I remember waking up to the misty view of mountain peaks. It rained the whole night, and the morning didn’t look any better. But as luck was on our side, it was cloudy but not leaking. Our morning started with an introductory session and a short briefing about the trek.

We crossed the villages of Janglik and Tonglu, took the blessing of Jakh devta (local deity of Janglik village) and left the civilization behind for the next 6 days. We crossed Charangchu thatch, Simmer break point along the way. Over 70 percent of the trail was through dense forest which suddenly opened up to vast green meadows of Dayara Bugyal. The site was breathtakingly beautiful.  Dayara Bugyal is one of the most beautiful camp sites that I have come across in my trekking experience. 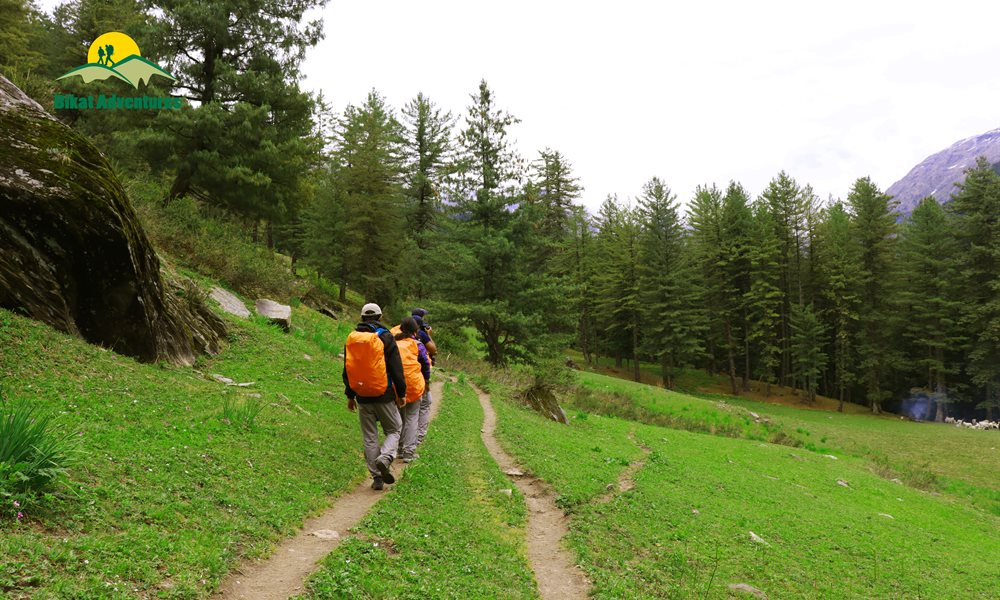 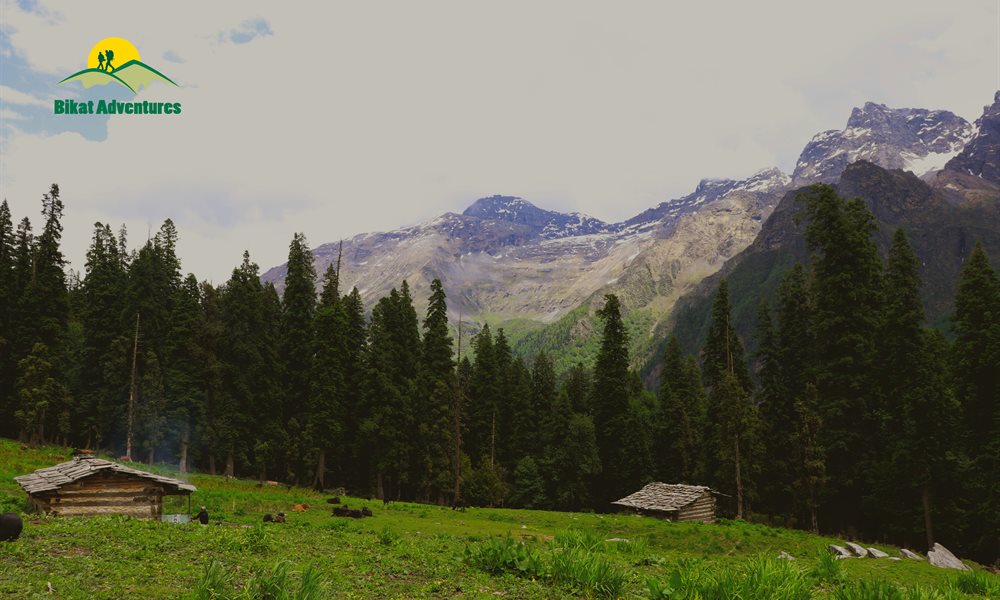 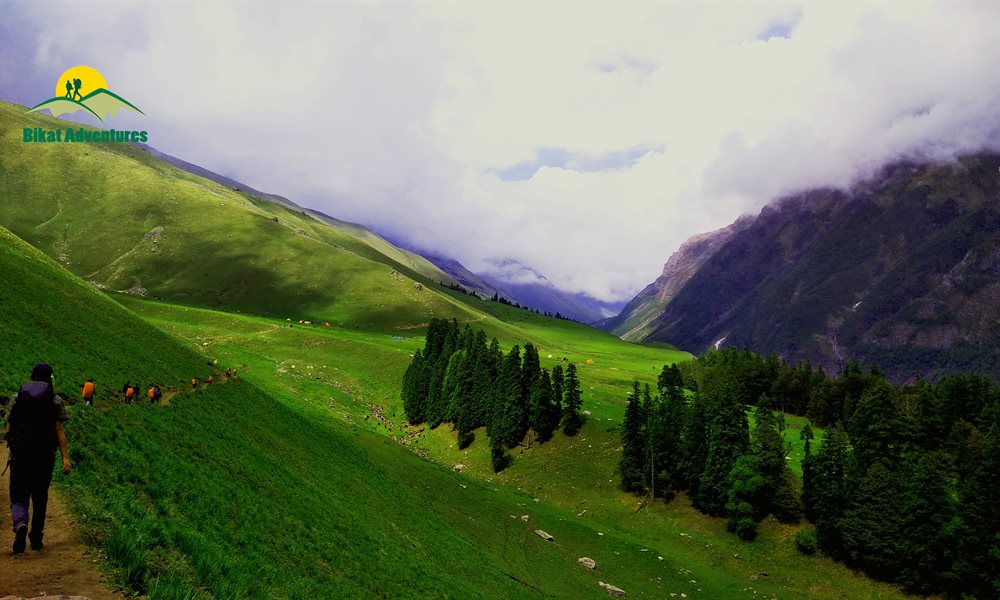 Real talk, have you ever found yourself in your tent on a trek at midnight unable to hold your pee any longer and venturing out at night despite being scared of going out alone? It's every camper's cryptonite, and yet, probably one of the best things to happen to me on the trail. Bravely exiting my warm tent to answer nature's call, I saw a bazillion stars twinkling above in the crystal clear Milky Way. Had it not been so cold outside, I would have stayed there til morning. 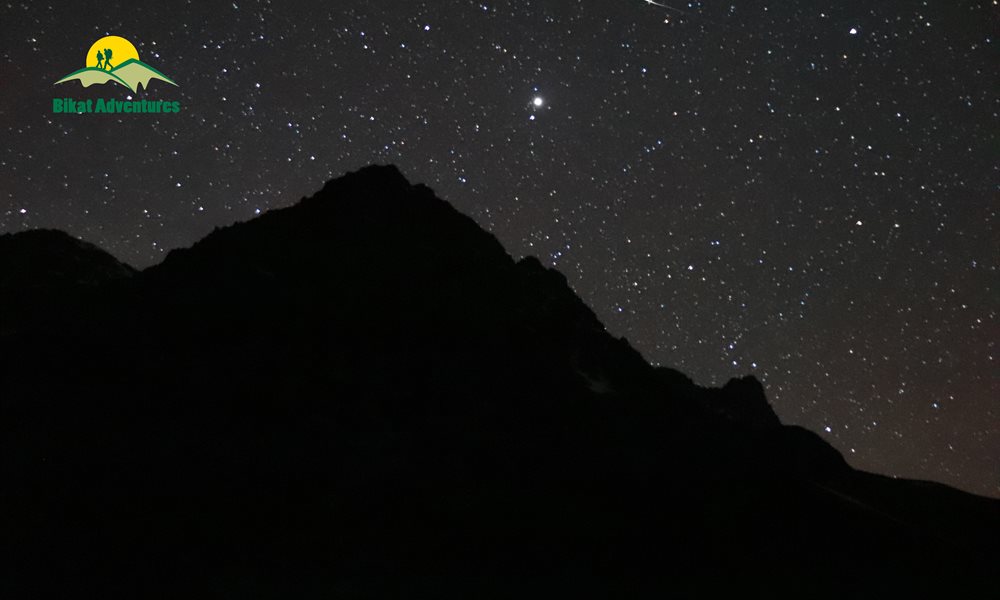 Our day started with the early morning yoga session followed by a learning session on how to pack a rucksack. From there we left for our next camp site, Lithum. 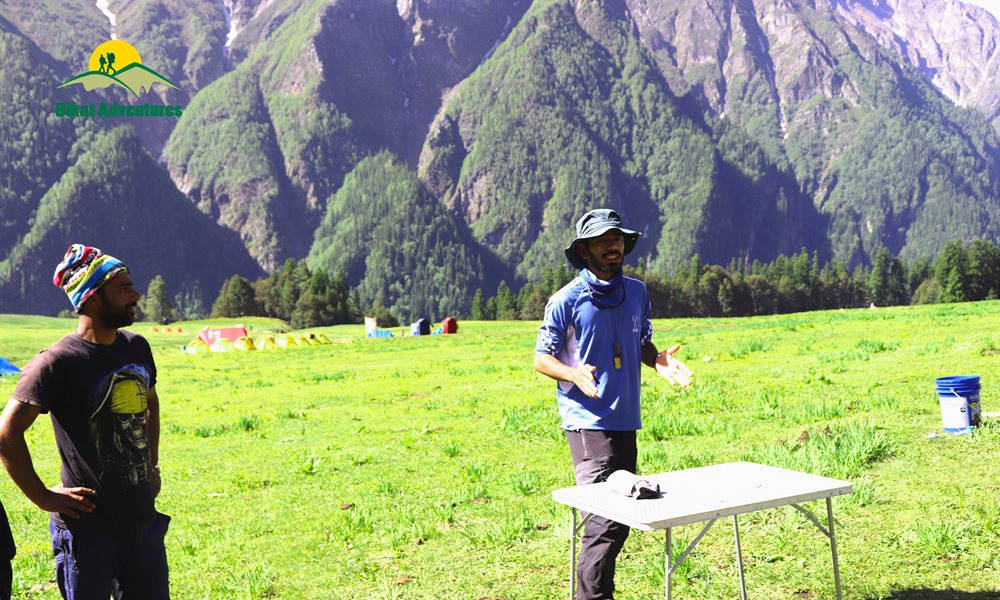 Walking along river Pabbar, we crossed Mouti Thatch and Shapadi Thatch on the way to Lithum camp site. As we entered Lithum we could see a snout of waterfall which is the origin of river Pabbar that we have been traversing along since day1. Since it was already a long walk til Lithum, we had to wait until the next day to see the waterfall’s source, Chandranahan Lake. Until then, the high-altitude lake sat hidden behind the steep mountain walls, waiting for our visit in the morning. 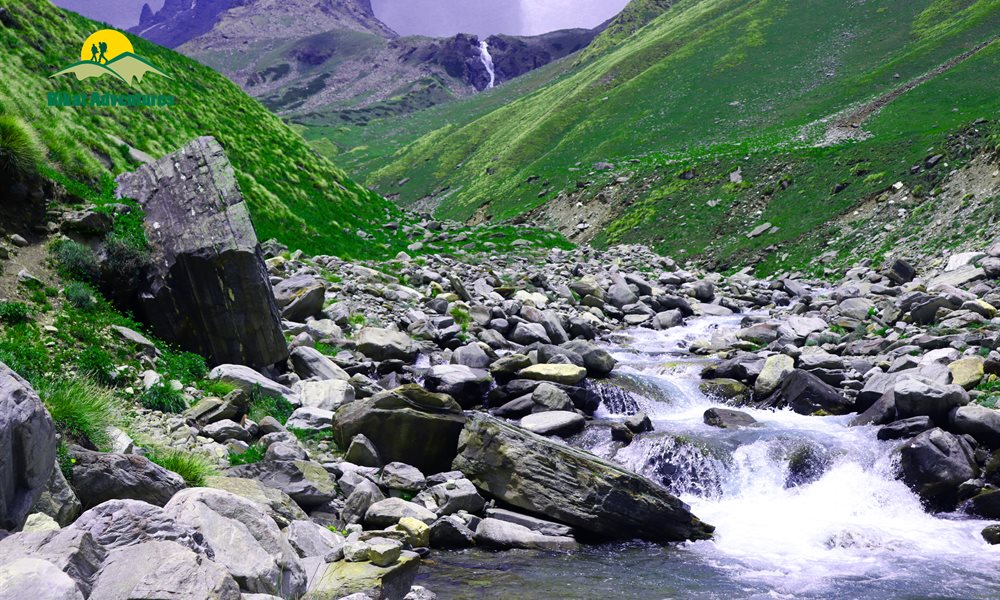 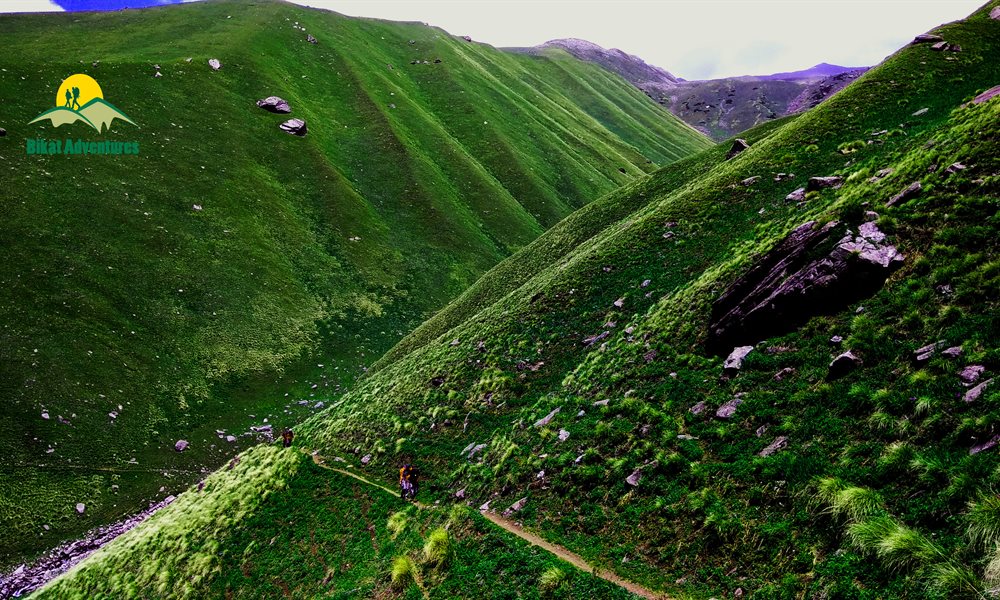 We were not bothered by the steep climb since we knew what was coming up next was worth all the sweat. One and half kilometers of steep climb alongside the waterfall later, and suddenly the view opened up to the flat land of Chandranahan Lake. 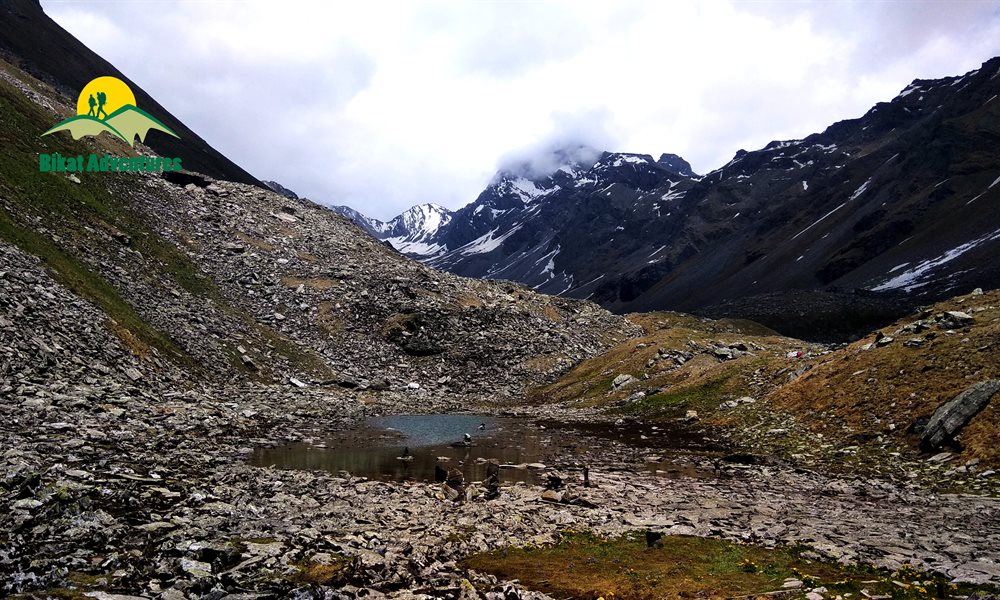 Chandranahan Lake holds mythological importance among the local people of nearby Villages. The local deity ‘Shivru’ of Rohru Village visits this lake once in every 5 years to take a dip in this holy lake. Another story says that the crescent moon of lord Shiva took a dip in this lake, giving it the name Chandranahan (in Hindi language, Chandra means Moon and Nahan means Bath). Stories aside, it was a sight to behold, but since weather changes drastically in mountains in the afternoon, we had to descend back to our base before the impending downpour. 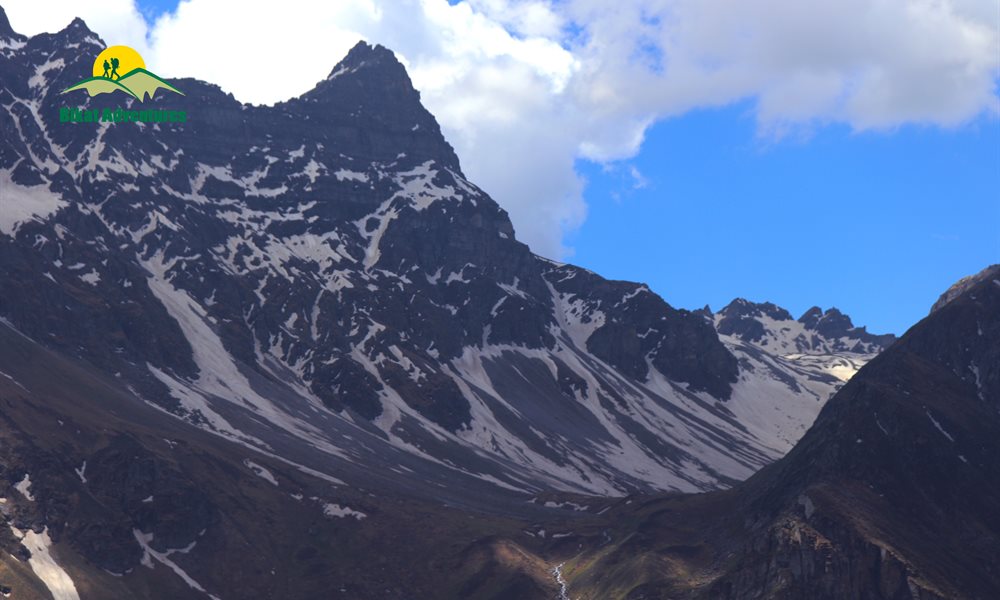 A gust of positive energy from our early morning yoga session, and we were off to our next camp site Dhunda thatch. Between Buran Ghati Pass and Gunas Pass, we were gifted with a marvelously panoramic view of the mountains.  The first glimpse of Buran Pass filled us with sheer joy, leaving our minds to anticipate what lay behind those mountains. 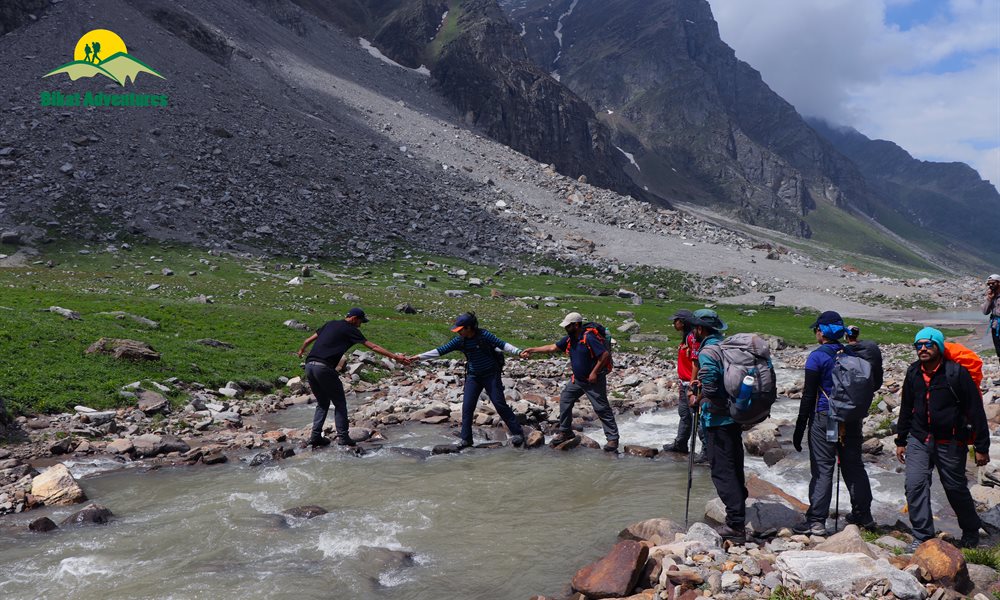 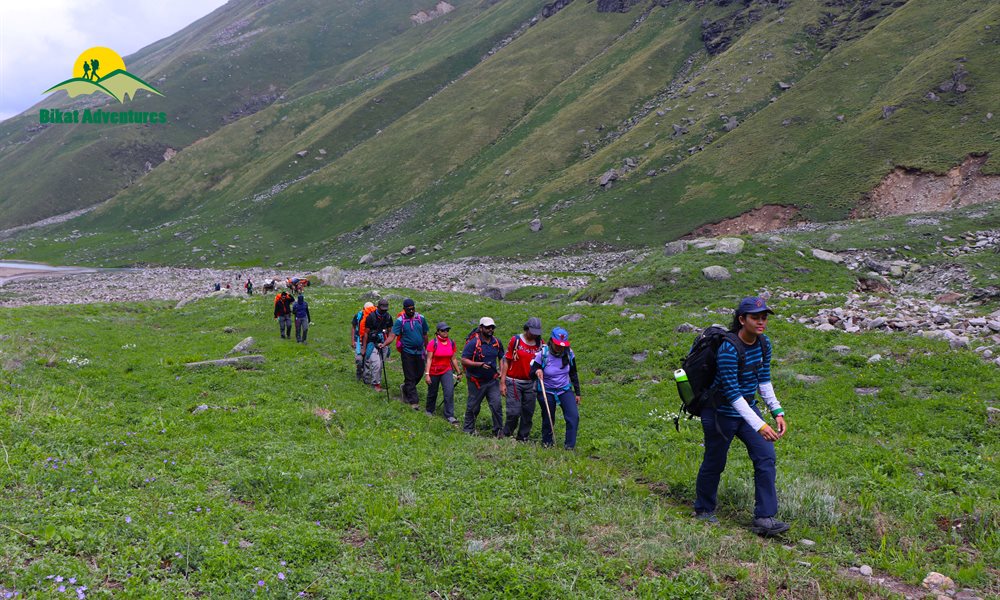 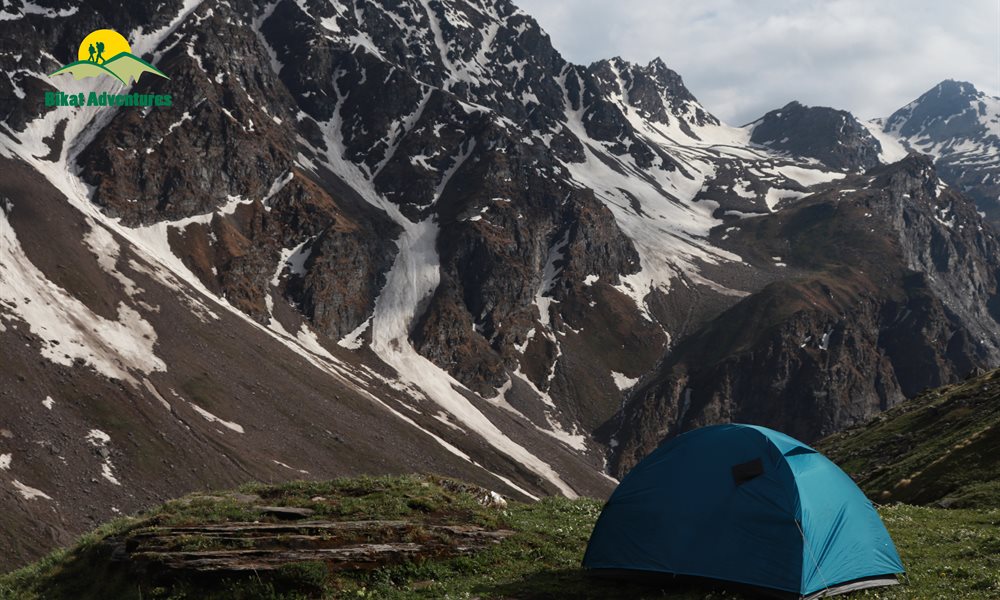 We started at five in the morning to make it to the pass on time. The first 4 Km are a steep ascent through scree and moraines. The steep ascent, rough terrain and thin air all together made the climb more and more arduous, and we could only hope for the view to be worth it all. I must tell you, it did not disappoint. Just like the snowy world opens from behind the wardrobe doors in the movie ‘The Chronicles of Narnia’, the snow covered pass, the snow wall and the snow valley opened up as we reached the pass.

Standing at the height of 15000 feet, hugging and congratulating, the feeling of achievement was thrilling. After steep ascents and mild descents for the last four days, we had finally made it to Buran Pass. Our celebration was short-lived however, for the tough part was yet to be dealt with, the snow wall rappelling.

We rappelled down 400 m of snow wall, falling and slipping, and then had a joyous snow slide of about 200 m. Done with crossing the pass, we had a long walk til base camp Munirang. The path was through rocks and ice sheets, followed by grassland, and finally we re-entered the tree line area after 14 hours of trekking. 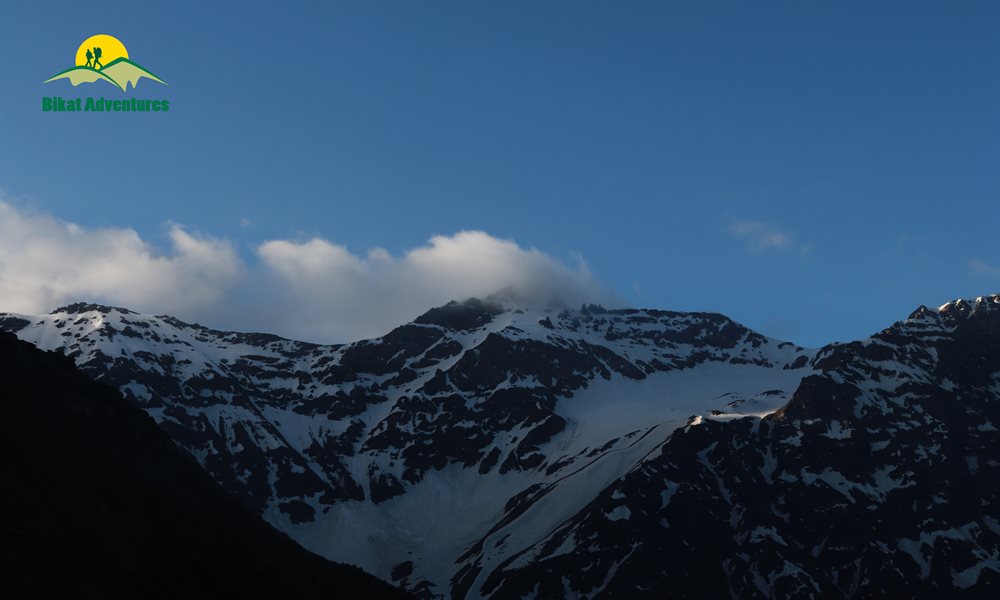 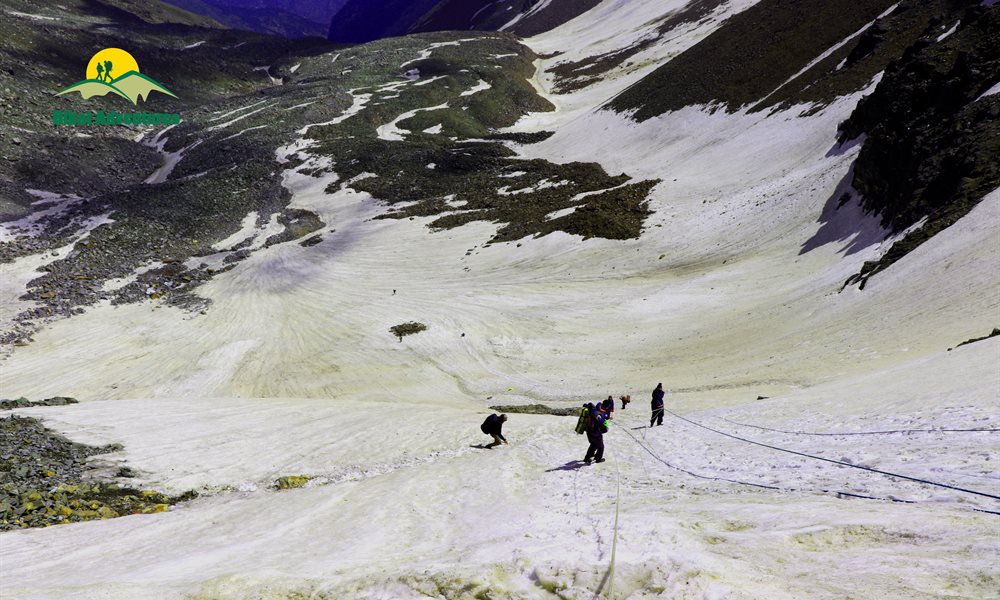 Staying in wilderness for 6 days, we finally entered civilization on day 7. The eager eyes and pleasantries exchange with Barua villagers filled us with the sense of returning home after accomplishing something. The past 6 days' beauty was already playing on loop in our minds, and that nostalgia we know all too well of a happy memory coming to an end began once more.