Footloose in the Himalayas

Often while travelling, worn down by fatigue we ask ourselves “Why am I doing this?” Why does one need to step outside one’s own comfort zone and push for an experience that provides one with little material benefit. Most of our experiences today are served to us through a variety of mediums like television, while the most neglected experience is of being in nature, our busy lives and various obligations makes it difficult for us to step outside the city. The events I describe here took place two years ago and are some faint memories of that time spent in Johar Valley in Uttarakhand trekking from Munshayri to Milam.

During summers in Delhi it can become a little difficult to appreciate the weather, so my roommate and I decided to go for a trek .Done with our graduation, it seemed like an ideal way to get a fresh perspective on life. We started from Nainital in the morning of 7th June 2015. We were going to Milam which was once the largest village in Kumaon region of Uttarakhand famous for its trade with Tibet, the village is now a ghost town with a population that one can count in finger-tips. Milam Glacier originates from Himalayan peaks Hardeaol (Temple of the gods) and Trishuli (Not to be confused with Trishul ), Mangraon, Deo Damla, Sakram and on the other side stands Nanda Devi  separated by dark alpine big- walls. 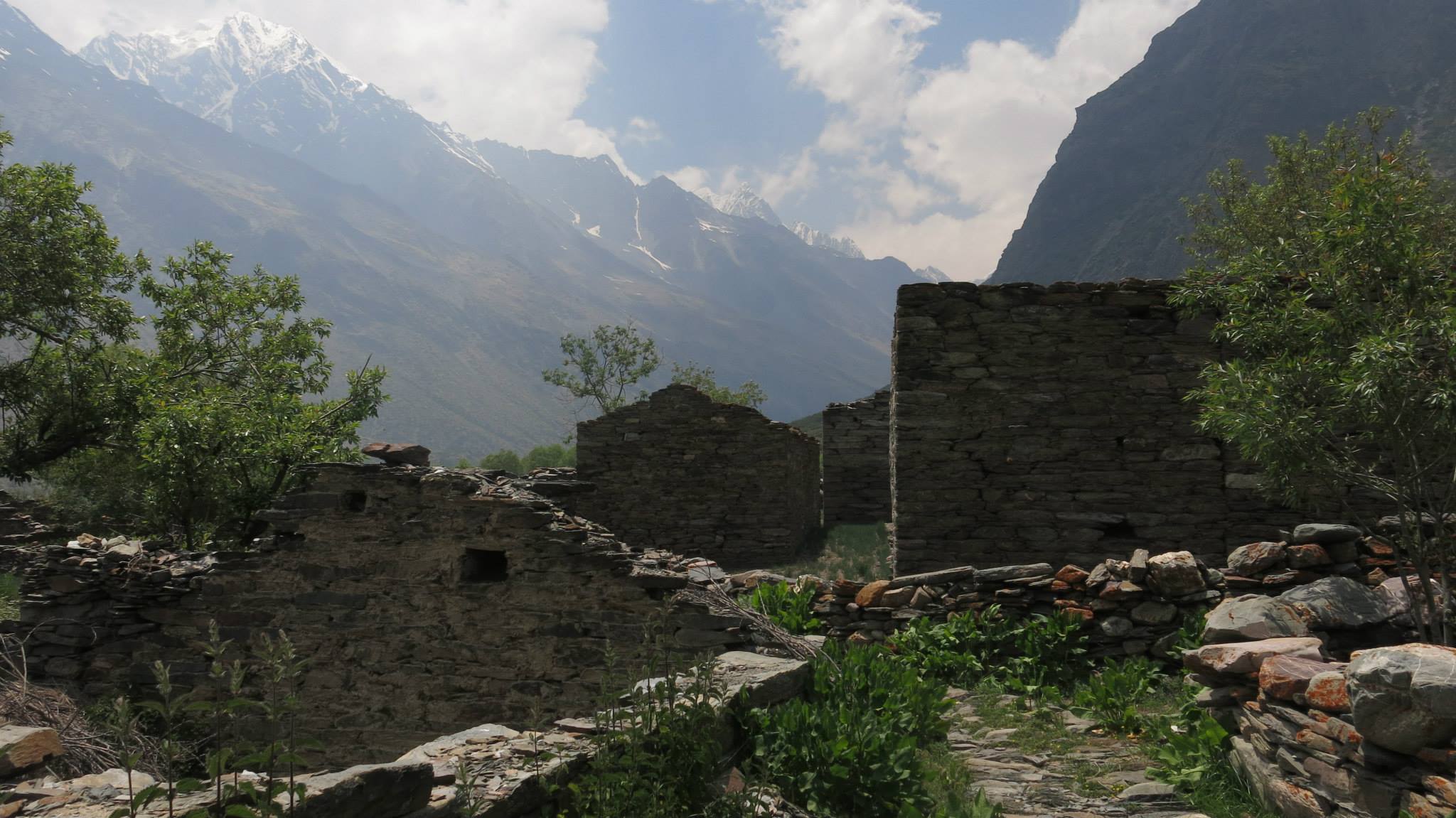 We arrived in Munshayri the fatigue of a long journey was broken by the sight of Panchachuli massif , as our eyes started to wander we could see patches of lush green forests on all sides. To the extreme left one can see various summits of Johar valley winding deep within themselves and to the right we could see Gori Ganga proceeding down to the plains .In the morning we were told that we needed a permit for our trek, though the process sounds a bit complex, it can be avoided if one has hired a local guide who is familiar with the procedure. It was around two when finally we were allowed to begin our journey. For the first leg of our journey we were dropped by a taxi near chillum dhar, from there one has to walk to the first nights halt Lilam approx 6 km. We followed a trail of dense bamboo bushes, after walking uphill for half a kilometer we joined a half constructed road. The road though not motor able is proposed to be developed till Milam it appeared the authorities wanted it to be a two lane construction. Landslides had wrecked the area below the road; circular areas in the stone walls marked the areas where dynamites would later be placed to blast the impenetrable walls. Workers were working and living in road side sheds and were looking for wood to cook their dinner. Here we were informed that the remains of an oak tree which stood right in-front of us was the last point where telephone signals could reach. After bidding last-goodbyes to our families, we put on our adventure caps and proceeded into the wild. 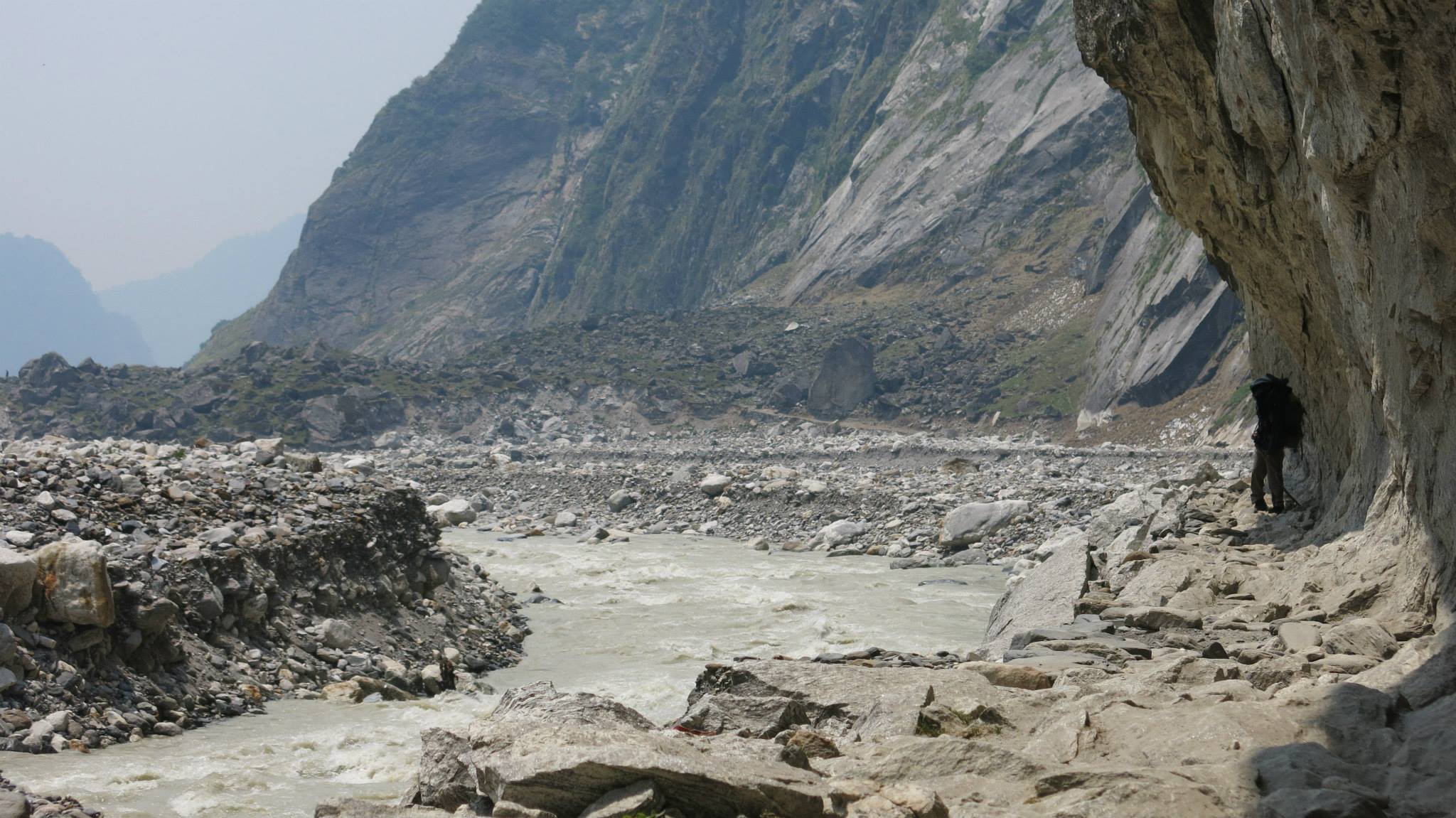 Between thoughts of my past and the picture of my present, I saw my partner take a plunge into a recession which marked the road’s end. Moving ahead I could see some faint-footsteps marking the way, deducing the situation it seemed like the old way had suffered a lot and this recession marked the beginning of the new way .At first it was alright but then after a few turns the way became sketchy we were now walking on crumpling mud, clutching root twigs anything that appeared to hold our weight. On the other-side was nothing but a sharp drop of at least 600 meters which ended on the riverbed. One wrong step and only our permit application in the SDM office would serve as a proof of our identity. We walked slowly balancing the load on our shoulders and camera’s on our necks. Within minutes we knew we were on the wrong path, as the way led us further into an un-inhabited patch of land from where we could see Lilam. But the way to the village had disappeared from our view. We were lost; we took off our bags and started wandering in the surrounding area to find a way. The village was diagonally opposite to us so the obvious way appeared to be upwards. We started to climb and after a series of twists and turns reached Lilam.

The village is located on a slope and the only houses which provide one with shelter are located higher up the mountain. Eventually we reached a small shop where an old lady told us we could stay. On inquiring about the tariff she told us that she only charges for the food; the rest of the comforts came free. It was a little difficult to take in because at such places people are expected to charge for every resource they have themselves paid for, but we discovered that in reality people help each other once the altitude starts increasing. As we were having our tea we were joined by a family who were going back to Munshayri after working in their fields.

I informed them that my mother’s ancestral house lies in the Pithoragarh district and this kindled our relationship. As we were having our dinner the eldest member of this family insisted that we dine with them. My head was still concerned with appearances and by the look of it they didn’t have much food to offer, but once we sat down they didn’t stop filling our plates with hot puris. After having our dinner we realised that these strangers were giving us a majority of their share. When asked why, we were given a simple answer - because they felt like it. In the morning we woke-up to realise that the family had left. We never got a chance to introduce ourselves formally.

Our next stop was Bogudiar, the hardest section of our journey. From Lilam one has to take ‘Nain Sing Marg’ which was worked out by Pandit Nain Singh the famous spy explorer from Milam .Being a “Pahari” he chose the direttissima route up the mountain and now after 300 years we followed his lead. The way goes above a high mountain and then follows a steep decline. We were accompanied by ITBP (Indo-Tibetan Border Police) troops, some Nepali workers who were ferrying loads to Milam for the ITBP camp. We quickly became friends with them even though we walked slowly we were often helped by our Nepali friends who waited for us when we were left behind.

After crossing a bridge that marks the confluence of Gori Ganga and one of its tributary, we walked through jagged mountains deeper into the Johar Valley. We reached Bogudiar completely haggard and soon collapsed in our sleeping bags only to be woken for our dinner by our host Sundar Singh. Next morning after having our tea as we proceeded to Rilkot, our surroundings grew wilder. Someone had spotted a bear on the riverbed and we were told to be careful clouds ushering rain threatened to release at any moment. Through a small patch of apple trees we closed in on our next obstacle- snow bridges. These accumulations of snow are supposed to be safe to walk on but one never knows for sure. Lined with deep crevasses and an active river underneath, one has to walk with calculated steps to avoid any problem. Around mid-day warm sun-shine greeted us and above us we could see huge virgin big walls which would tempt any climber who walks by. Milam was still 28 km away and we could see small shrines dedicated to the goddess Nanda Devi marked the path. Our voices began to fade against the roaring sound of Gori Ganga which was now flowing beside us. 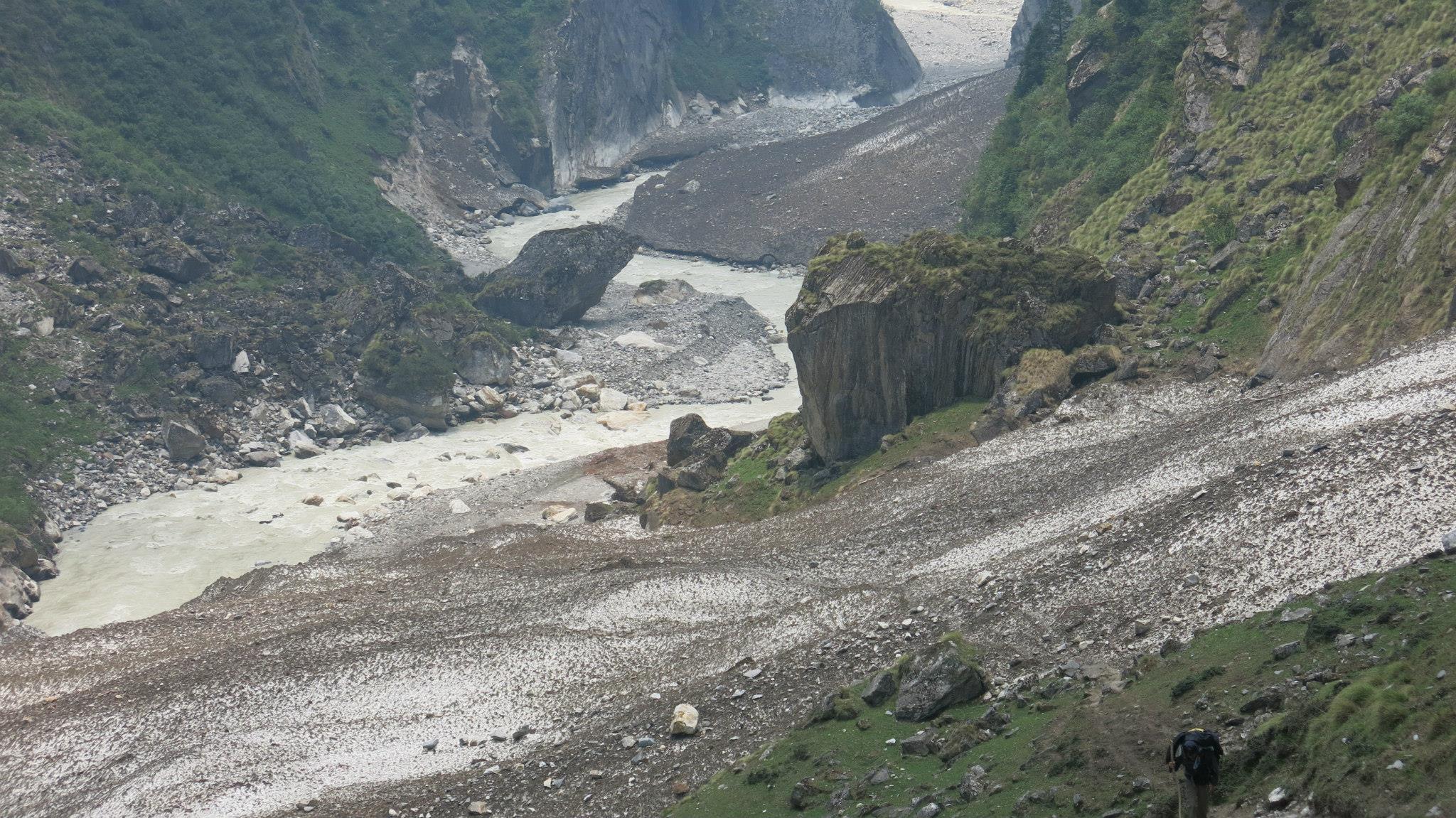 We were carrying a copy of The Nanda Devi Affair with us, a must read for anyone trekking in Uttarakhand. Following Mr. Aitken’s advice we unleashed the romantic within our hearts and in our case it amounted to us through walking very slowly. Around 4 P.M the skies unloaded and we had to seek shelter under a boulder. Drenched to our bones our spirits had started to fade, at that very moment the weather cleared and we were greeted by snow-capped mountains once again. Golden sun-set filled the skies and we were in Rilkot. We were now one stop away from our destination the village of Milam. Rilkot only has four houses out of which one provides travellers with accommodation. The day when we arrived, the villagers had decided to butcher a goat. We tried to pursue the owners to sell us some meat and ultimately it was decided that for a price of one-fifty a plate we could get our share .The meat from a distance appeared candy red and was so rich in fat and protein that next day it gave us ample energy to walk towards Milam.

Again we were fortunate to accompany two ITBP officers; one of them told us he had saved Harbajan Singh the famous Indian cricketer in the Kedernath tragedy a few years ago.

The weather was the best we obtained so far. We walked along with our Nepali friends, while snowy summits and meadows crashed around us from high skies above. Every few kilometres the landscape metamorphosed into scenes of exuberant brilliance. We reached Burfu which marks the final division in the valley. One way leads to Nanda Devi basecamp and the other to Milam glacier. 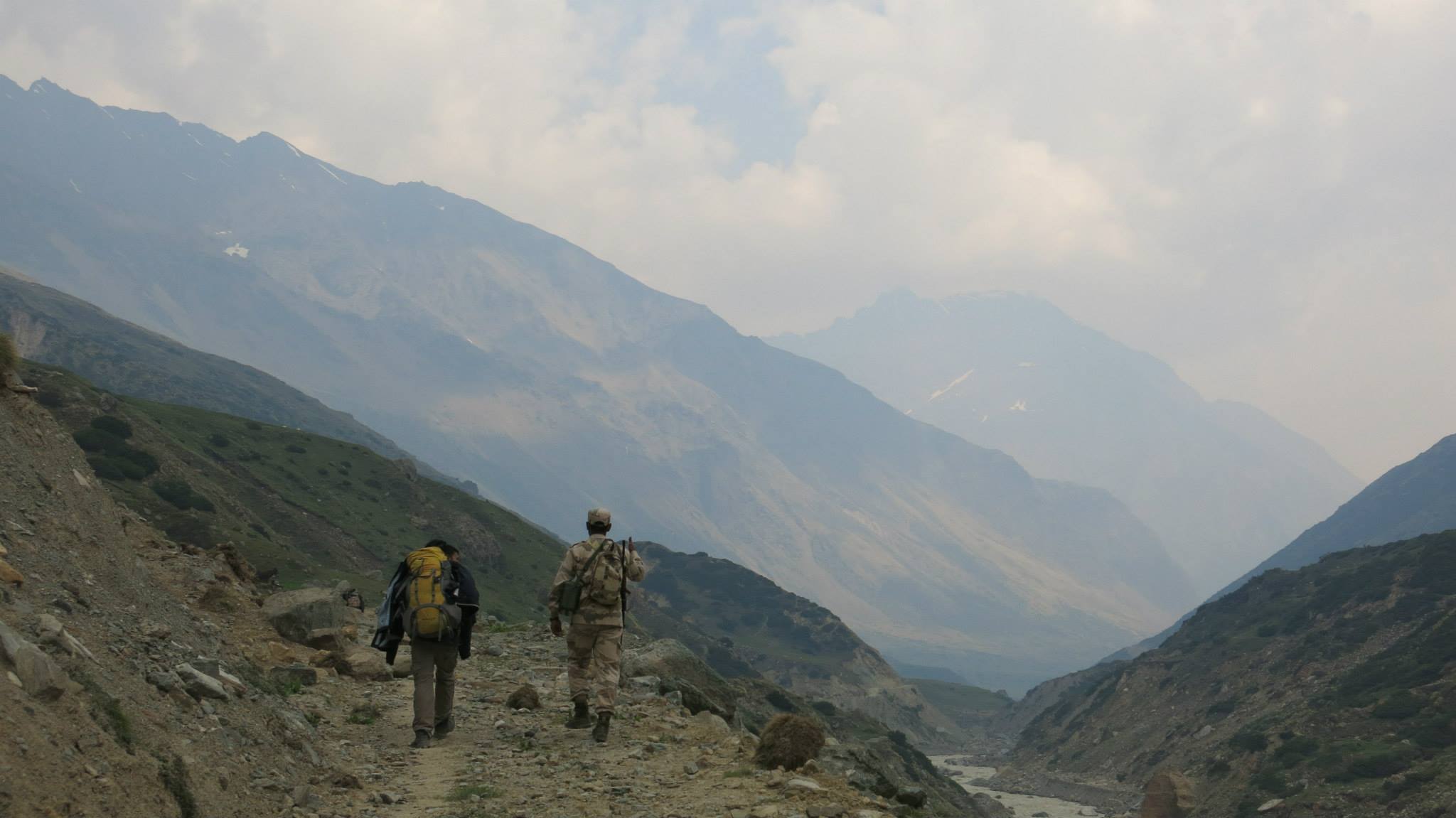 Owing to the shortage of time we could only visit one place and decided to proceed towards Milam. We were offered a ride by our companions from the ITBP and around mid-day we arrived at Milam. After our lunch we decided to visit the glacier as we approached it the realisation struck that the beauty and profoundness of the Himalayas cannot be captured through images, in the end photographs are only our projections, from our evolution to our destruction all the chapters are written in the walls and the slope of the Himalayas. Every season, a huge part of our history is influenced because of the presence of Himalayas in India. Trying to explain my deep seated emotion through words or to frame them in a photograph seemed an impossible task at that moment. I kept my camera aside and said a short prayer and returned to the road which was leading us back to the village.

Icy winds covered the mountains which were in front of us a moment ago, suddenly the realisation struck that we were miles away from our homes footloose in the Himalayas. 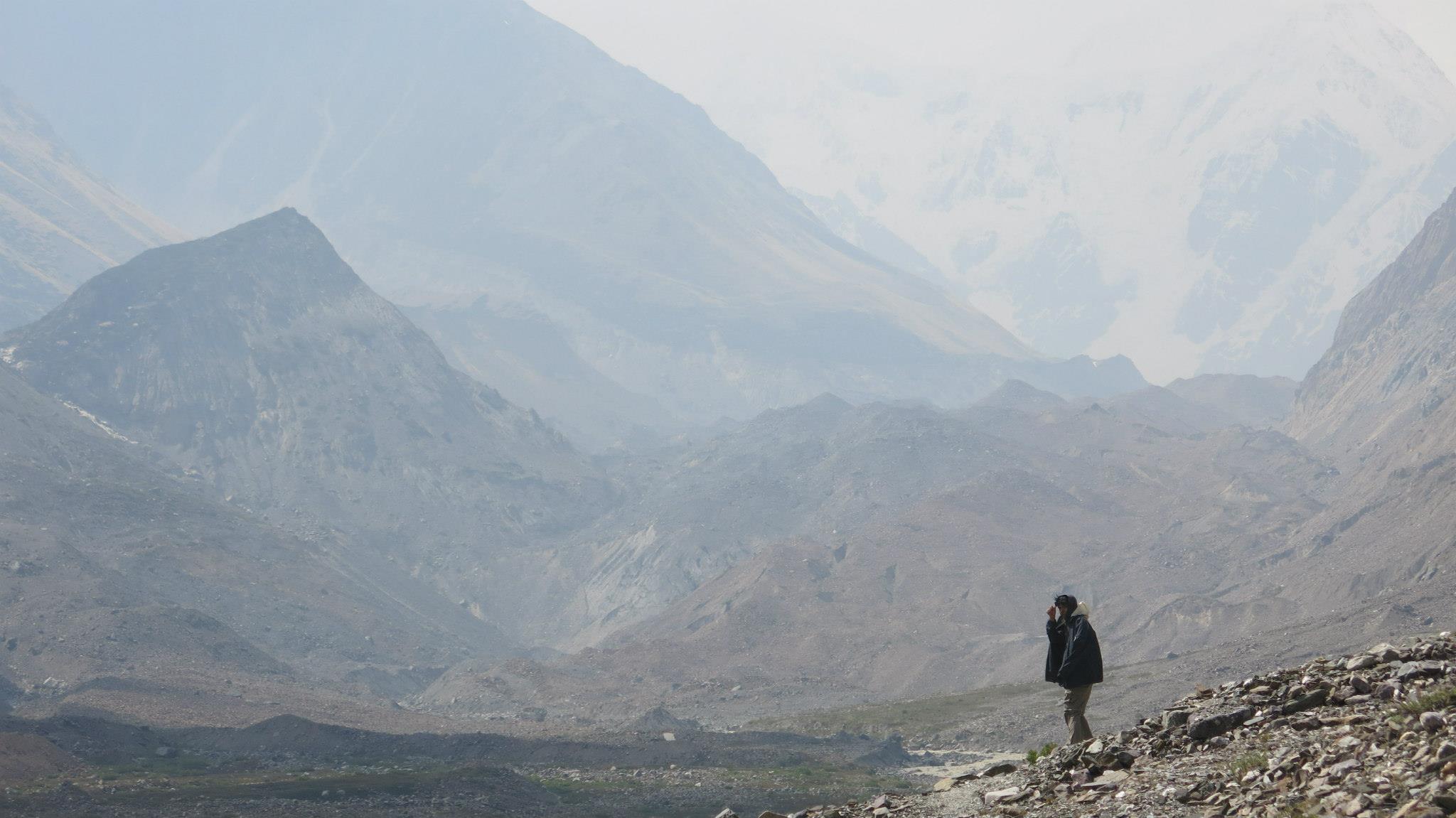 i like to believe the mountains give us a reason to believe . I am a writer who happens to have amb Read more