Meeting Annapurna: The Road to Base Camp

This is a tough blog for me to write, because it’s about my last trek with Bikat Adventures.

Working and trekking with Bikat for the last two years has taken me on a whirlwind through the Indian Himalayas to some of the most famous and fascinatingly hidden trails of the country. Life on the Bikat Exploration Team has carried us hundreds of kilometers across Himachal Pradesh, Kashmir, Ladakh, Zanskar and Uttarakhand scouting out virtually untouched trails. We took on the 6,250m peak of Kang Yatse II, crossed 30km of glacier over an 18,000ft pass from Himachal to J&K on Kang La, went in search of Ghepan Ghat, a hidden glacial lake in Lahaul and countless other unreal adventures. 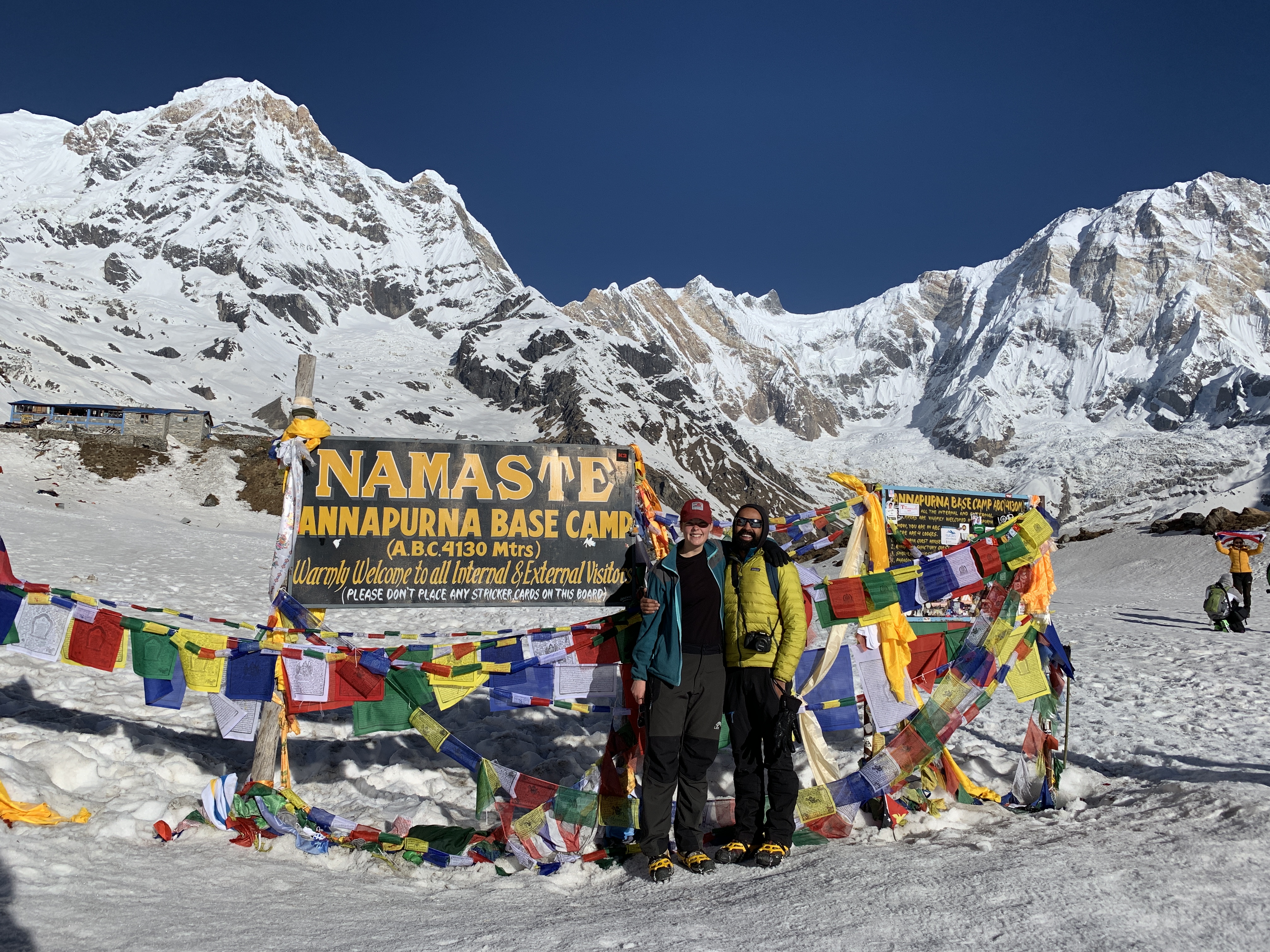 Needless to say, whatever my final assignment was going to be, it had some big shoes to fill.

Trekking to Annapurna Base Camp

Annapurna Base Camp has been on the map as a world-class trekking route for years, and for good reason. It’s jungles, bridges, local hospitality, and raw alpine views of the holy Macchapuchre and Annapurna herself are a spellbinding combination.

When we heard heading to Nepal to cover EBC and ABC back-to-back would be the finale of our Bikat explorations, I was thrilled, but I must confess - I found myself wishing that we could do ABC first and then finish strong with EBC. After all, it’s Everest Base Camp, the journey to the tallest mountain on the planet. THAT can’t possibly be topped by ABC, a trek barely half as long to a mountain far less famous.

Man, was I so wrong. But we’ll get there.

Body tired from having just finished the 120km EBC route with a 40lb backpack two days before, we threw our bags back on and headed to Pokhara, the starting point for ABC. Immediately my heart melted for this special place. 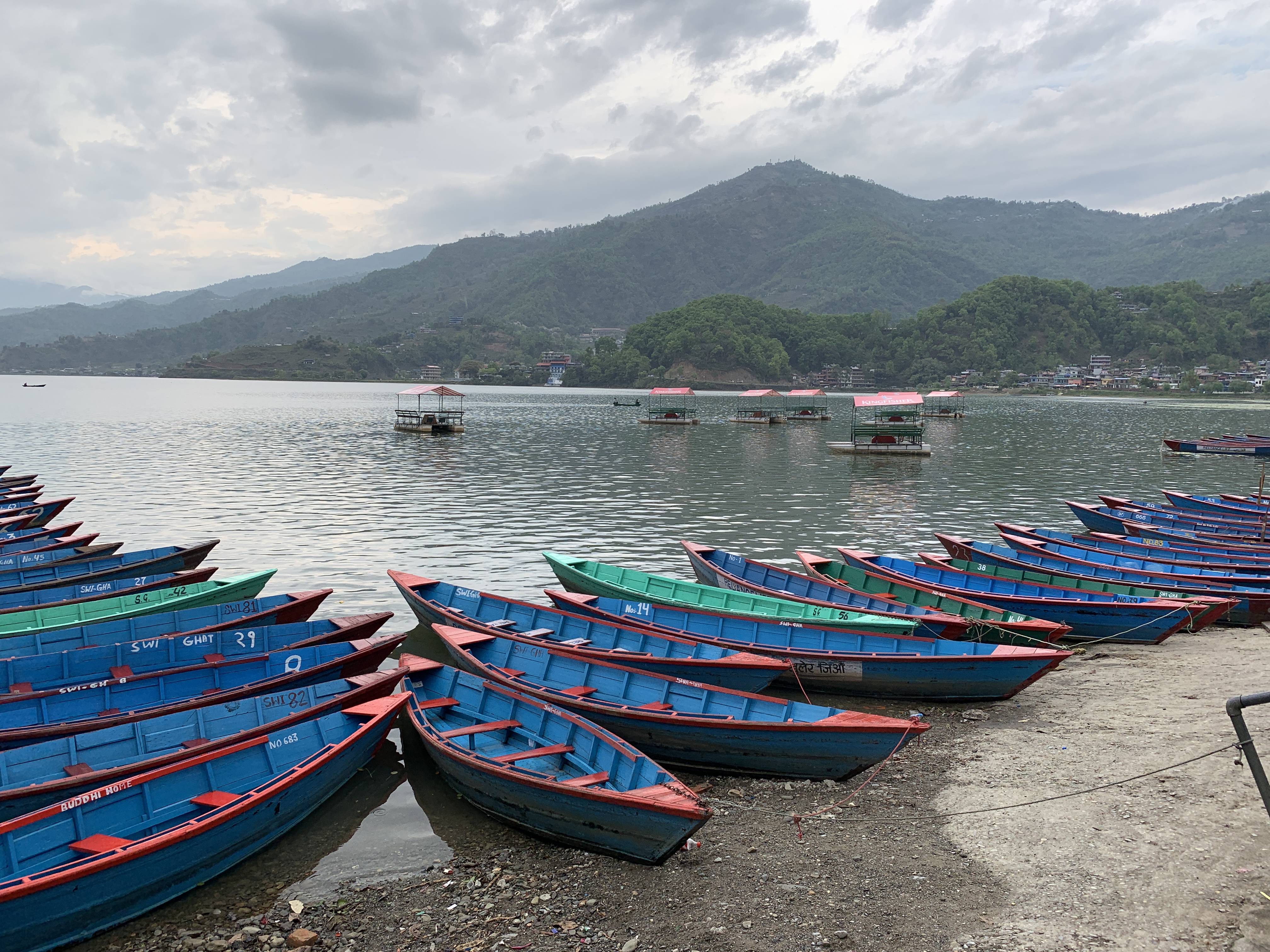 Nestled beside a huge lake below the mountains, Pokhara made me feel as if I had somehow accidentally gone to the beach. In the middle of this landlocked country, we rented a small boat and towed it out onto the waters, dipping our feet in and pretending to talk to the fish. We strolled along the boardwalk, grabbing a beer here and tasting barbecued pork there in the small bamboo shacks that line the shore.

I forgot we had come there to trek, if I’m being totally honest.

But we were, so off we went the next morning, starting the week off strong by ascending 1,000 meters on Day 1. My disposition about ABC vs. EBC began to change from the second we began. I had assumed that the jungles leading up to ABC would be identical to the ones rising upward from Lukla - wrong again. The Solukhumbu region of Everest was much drier than the tangled forests I now found myself in. By the end of EBC, my face was so parched that it had begun to flake and peel, but here the air was humid and full of life - as were the jungles.

Palm trees mixed with ripening bananas hung among thick vines. At times, we passed entire forests of bamboo, moss-buried rocks and over streams that gushed down to the steeply-rising valley floor. I had never seen anything like it. We spent three days climbing up and down through this growth, splashing our faces and drinking straight out of the springwater that bubbled up alongside the trail. 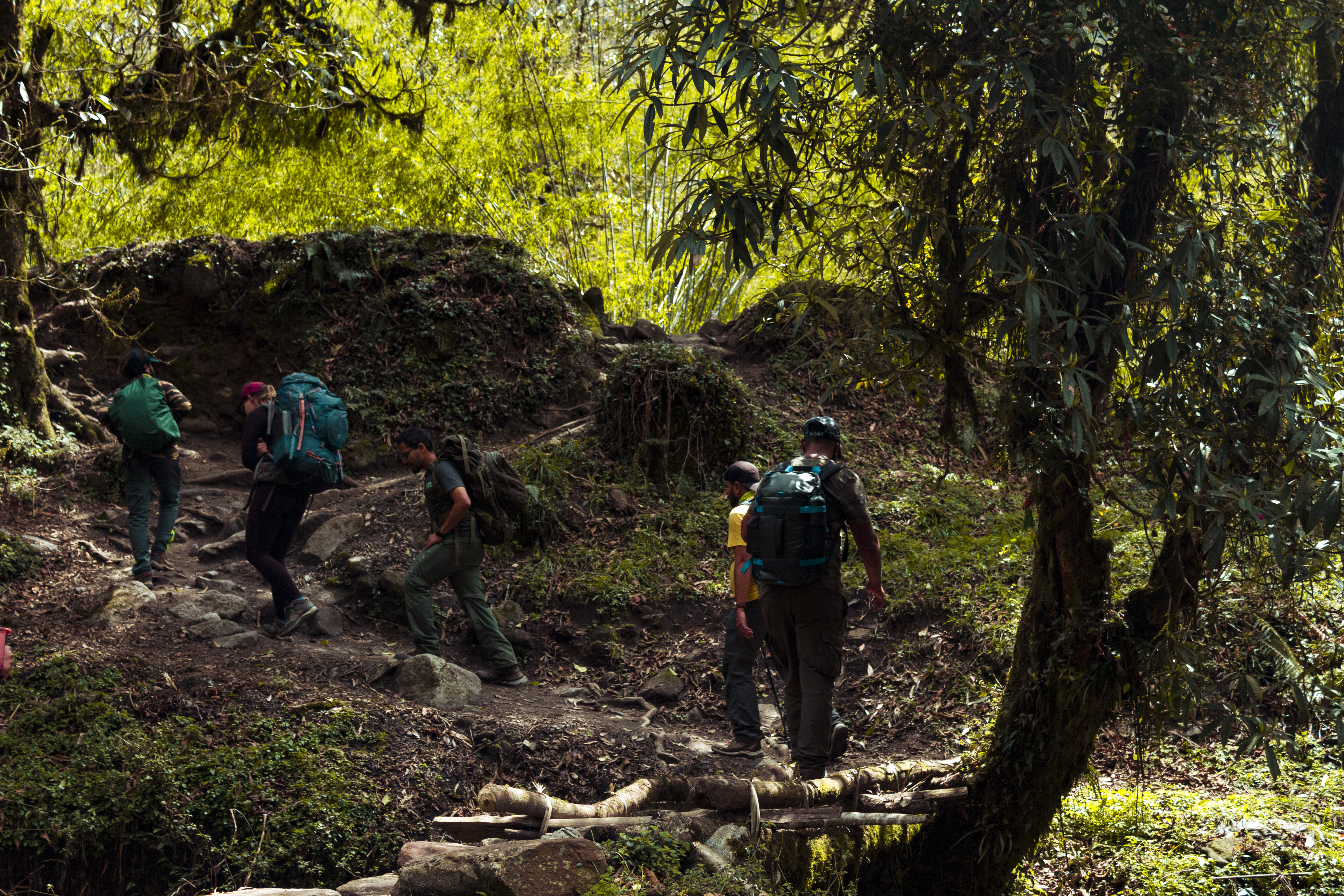 The harsh, icy world of EBC felt light years away, and although we were ascending and descending constantly, I felt refreshed.

But to see the biggest mountains in the world, you must leave the tree line behind eventually, and we did so on Day 4, entering the village of Deurali around noon.

Of course, we couldn’t pass up the opportunity to play a little make-believe right before reaching. Just shy of Deurali, we found an enormous curved outcropping of rock, Hinku Cave, so naturally we pretended to be trolls that lived there. 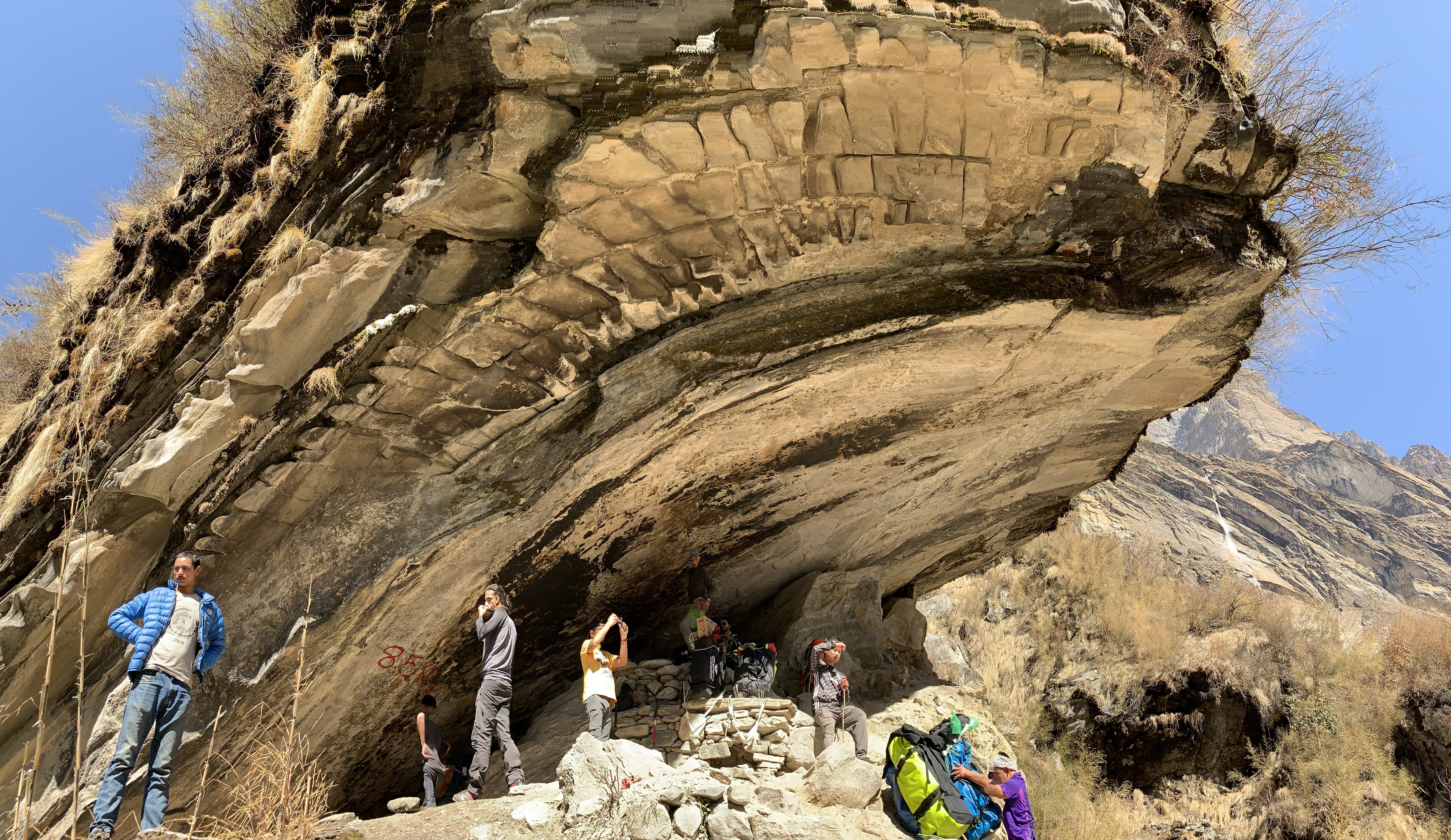 With the afternoon at hand, and our push to ABC scheduled to begin at 3:00am the following morning, we filled the time with hilarious games, tongue twisters, stories of old boyfriends and girlfriends and some good old fashioned dal bhat, Nepal’s signature dish of curried vegetables, lentils and rice.

While the rest of the world slept, we geared up, filled our water bottles, pulled our hats further down over our very cold ears and set off into the blackness.

I hate getting up that early, but there’s a tradeoff: everyone else hates it too. You get the whole trail to yourself. 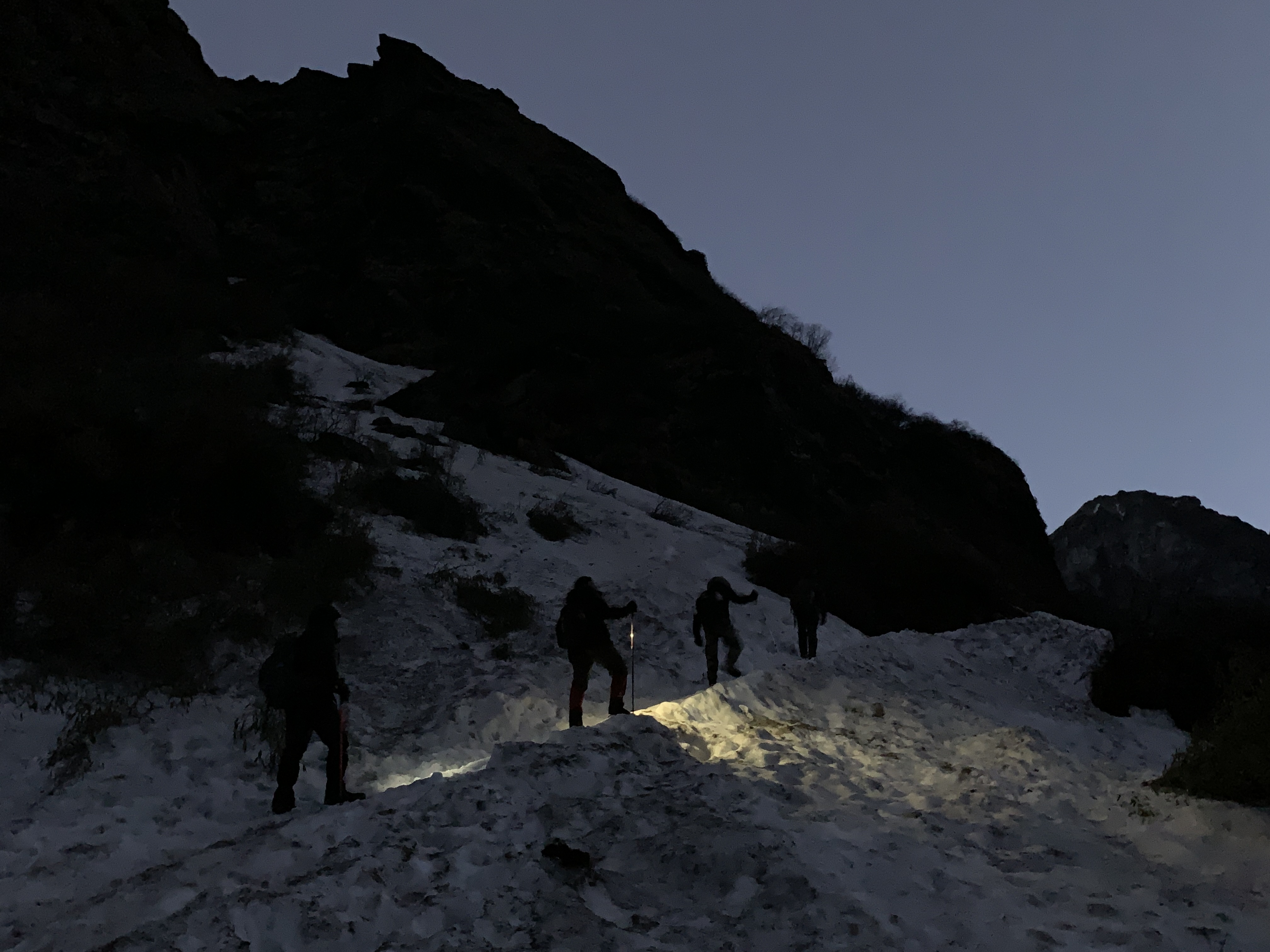 Midnight hike from Deurali to ABC

One other thing I find entertaining is that on the way up, you can’t see anything more than your immediate surroundings. By the time the sun rises, you’ve carried yourself far enough that dawn brings a complete surprise with it.

We hiked four hours, crossing patches of snow that eventually became a landscape completely covered in white. Still in the pitch black of night and following the barren valley upward, we covered our faces from the cold wind given off by the river.

At one point, the trail dead-ended into the side of the river. Jeet, our friend and guide, seemed perplexed by this as well.

“The trail doesn’t cross the river, it stays on the side we are on,” he told us.

Turns out, an avalanche had wiped out the traditional trail. This bridge was a new, improvised one the locals had put together.

We looked up in disbelief at the rickety bars of metal balancing between the two banks of the river. The platform, rusted in sections with pieces hanging off, tilted uncomfortably to the right, making you feel like it was falling as you crossed it. I took a terrified step - it bounced and moaned under the weight of my foot. I thought to myself, ‘is seeing ABC really worth falling into a violently-flowing river of snowmelt at 4:00am?’ Questioning my priorities, I inched my way across, vowing never to take solid ground for granted again, and on we went.

The sky began to pale from jet-black to that deep indigo of early dawn, too early to turn off our headlamps quite yet, but late enough to barely see the peaks we had marched ourselves right to the bottom of during the night.

And then we saw the lights - Macchapuchre Base Camp. We had been gawking at that mountain all week from different angles as we got closer, with her iconic fish-tail peak jabbing into the sky. Local law forbids climbers from attempting the route, as it’s believed the mountain is extremely holy. It’s hard to stop yourself from imagining though what it would be like to stand at the top. We looked to our left as we reached MBC, and stopped still when we realized the entire Annapurna range was semi-visible at this point, glowing a fiery gold as the sun began to rise. 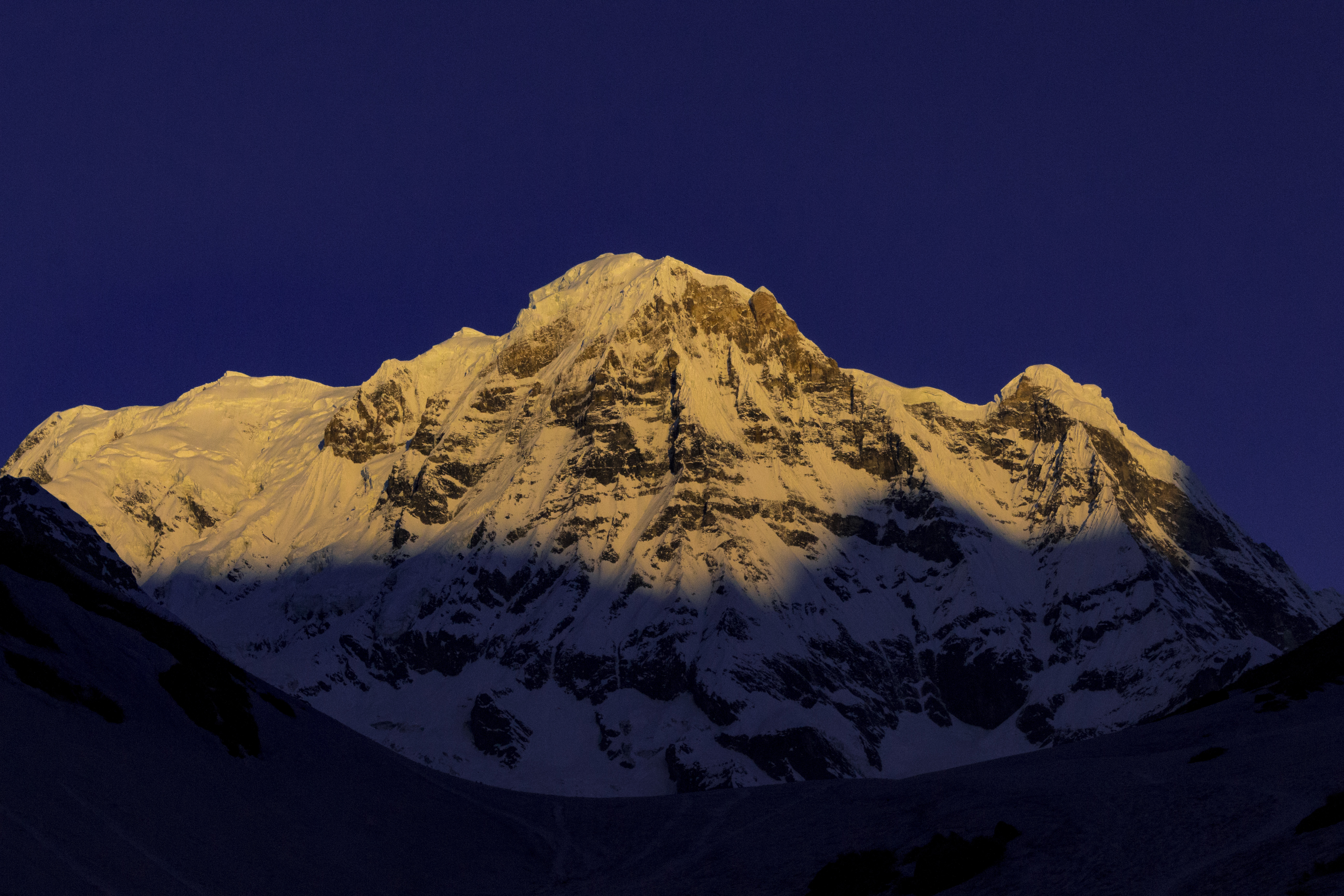 The only problem is, we had hoped to make it to ABC by dawn to watch the sunrise of a lifetime, but we were still a ways off, given the detour the bridge took us on. The rest of our group was moving a bit slowly, and Jeet was back with them, but when Sarthak and I realized we were about to miss the sunrise, we practically rocket launched up the last ridge, ascending 400 meters and 2.5 kilometers in under an hour.

Annapurna Base Camp is a tricky thing - you can see her coming from 2km away, which makes it look close. The thing is though, she’s positioned right at the base of Annapurna, right in the middle of 7,000 and 8,000 meter peaks. Everything is huge, so everything looks close. Everything is covered in snow, so you can pretty much through your depth perception to the wind - but then suddenly ABC steps out of infinity, and you’re there. 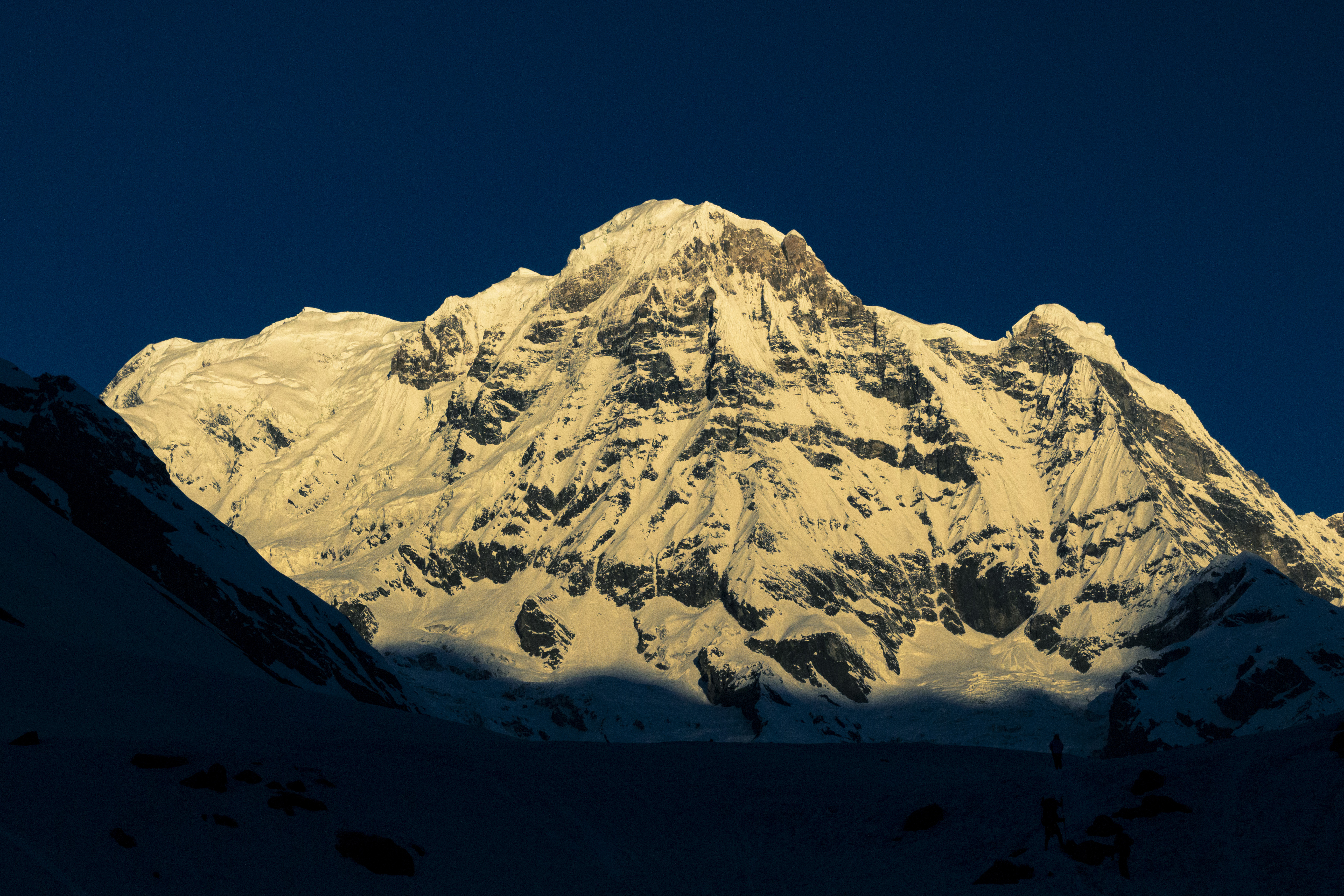 I’d seen the signboard everyone takes pictures with on my Instagram feed, so it was this strange sense of familiarity to see it myself, but it’s what is behind it that is the star of the show. The Annapurna massif demands your attention with its sheer size and elegance. To the left, Hiunchuli towers, with the Annapurna Glacier cascading down to your right.

Suddenly it didn’t matter that my body was exhausted, that we had hiked 120km to Everest the week before or that we had at least 10km left to go today - I felt strong, amazed and thankful.

I blew Annapurna a kiss.

We began our two-day journey down, reuniting with the bamboo and stream water and thick undergrowth of the jungle. Agricultutral fields along the trail

The last night we spent on the trail was in Jhinu, a village perched on a small outcropping, surrounded on three of its four sides by a steep, heavily-wooded drop to the river below. What we were all interested in though, was the hot springs that were apparently down by the riverbank.

We had not showered in 8 days, and our bodies ached from the month of trekking we had just completed.

And by party, I mean jump into nature’s bathtub.

The world is cool, guys.

As I slowly turned into a happy little prune, fingers and toes wrinkling in the water, I started thinking right back to where my Bikat adventure began. 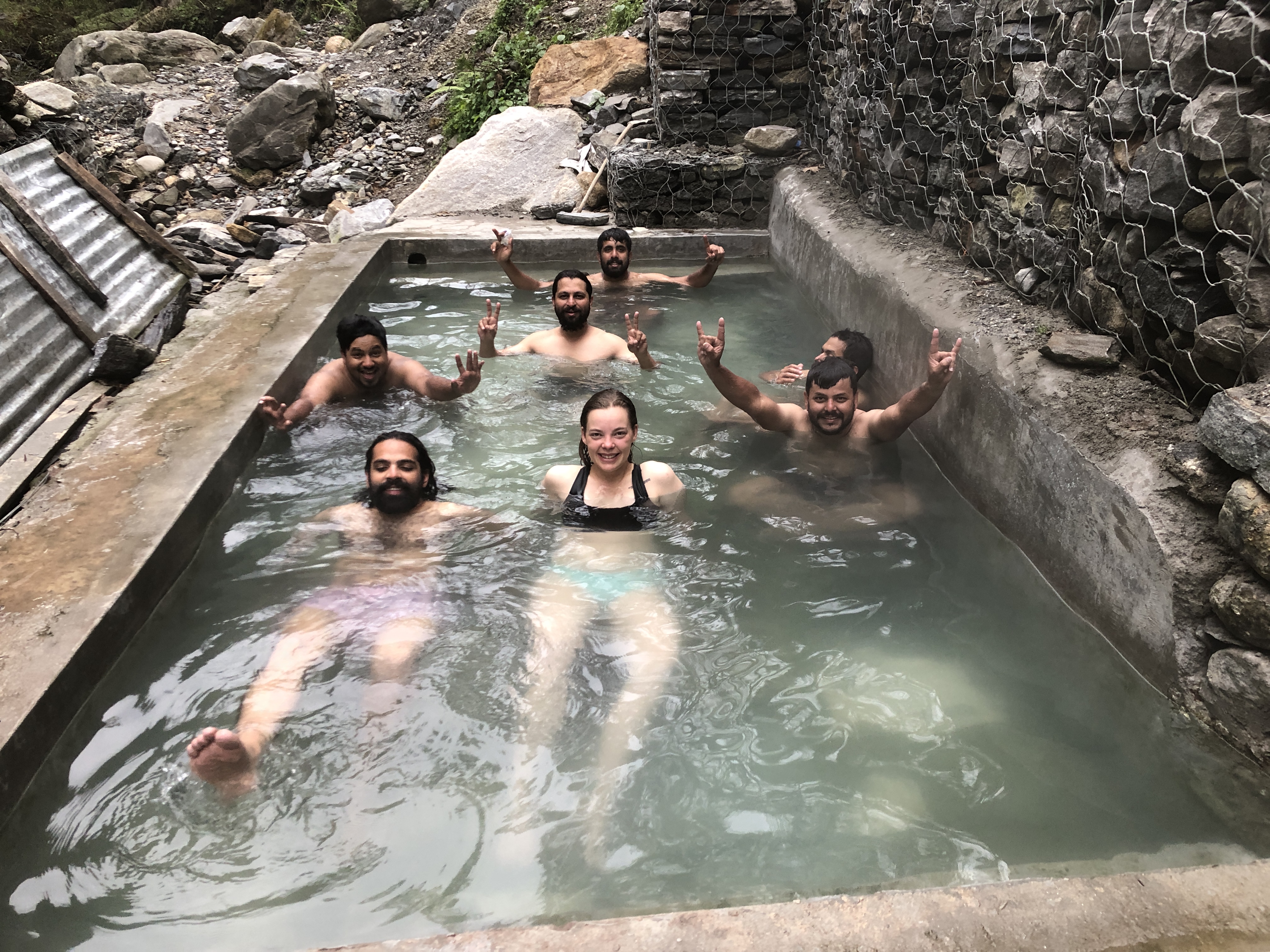 I remembered drinking lassi a shepherd had given us after crossing Rupin Pass. Teaching trekkers how to dance the Texas two-step at Deo Tibba Base Camp. Bursting into tears and laughter at the same time when we finally made it through a hailstorm to the top of Baralacha La. Breaking my shoulder cycling to Leh and being really scared. Healing and returning to Ladakh to climb Kang Yatse. Huddling for warmth by a goat poop fire in the middle of nowhere in Himachal Pradesh. Snowshoeing on 7ft of snow through Kashmir - and now here.

Nepal memories now flooded in, this one last round of adventure while on the Bikat team.

I thought about the first day in Kathmandu, reading every map about the places we’d go in the bookstore while we waited for a thunderstorm to pass. I thought about the 80kph winds that nailed our faces with spindrift on the way to EBC. Playing frisbee with some yaks outside a monastery. Seeing the tallest mountain in the world. Rowing the boat and sipping a beer in Pokhara before ABC. Racing the sunrise to see Annapurna. Sipping tea and watching the mist from the front porch of our lodge this morning. 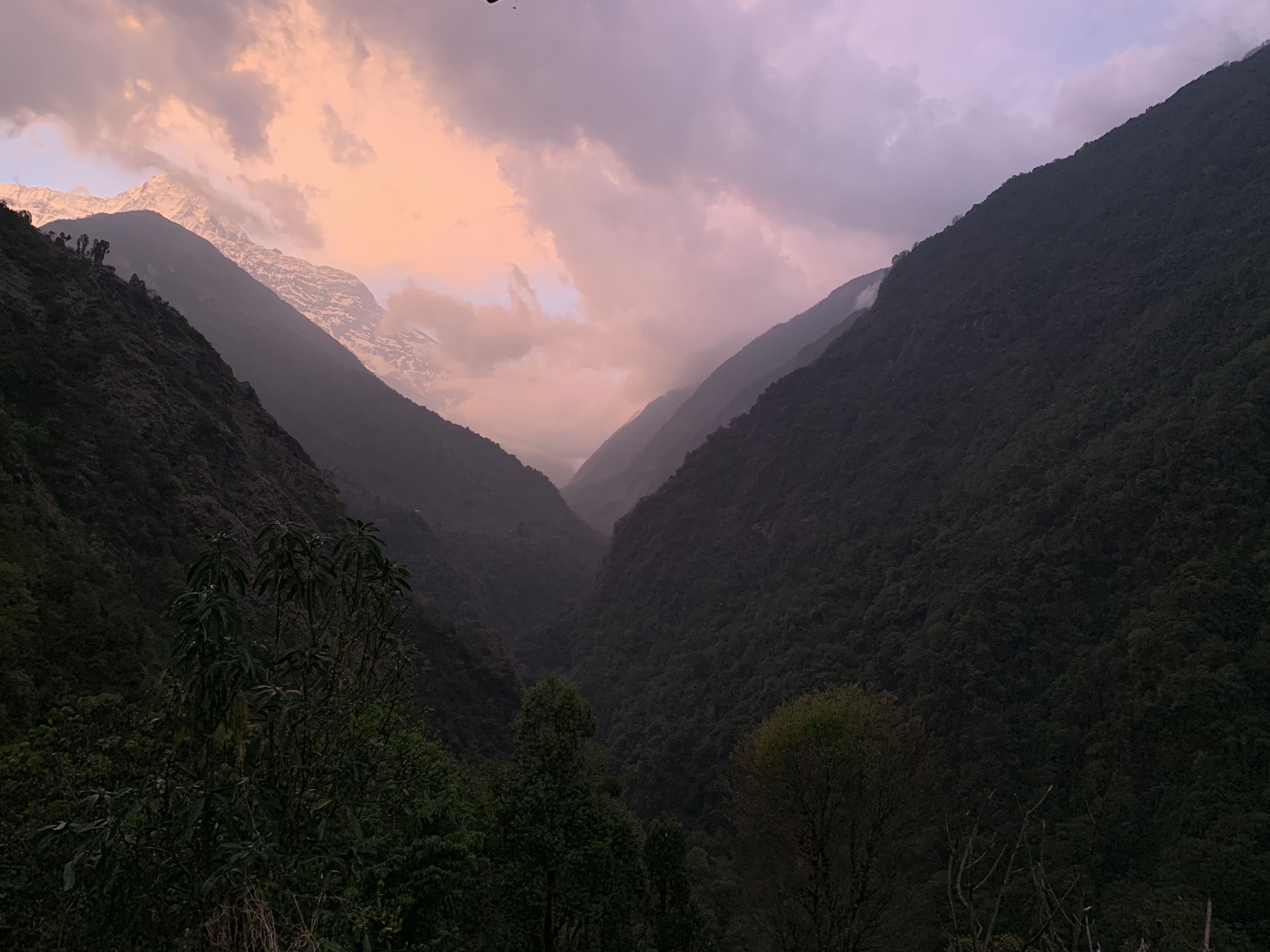 The Himalayas have become a home to me. They’ve beat me up sometimes, chilled me to the bone, been a muse, shifted my perspective and about a million other things.

Warm and clean from the hot springs and eating French fries while playing Uno with Macchapuchre in the background, I said a little thank you to ABC for being the perfect finale.