Nag Tibba trek is a perfect trek for beginners and first timers. It has an moderately steep trail, involves only travelling 5-6 kms a day which is ideal. The altitude is also not much of a hiderance with campsite at 8667ft and summit at 9917ft just entering the high altitude realm. This trek is especially very favourable for beginners because of low altitude related risks and low fatigue. Myself being an experienced trekker, with actively participating in difficult treks for the past three years I took Nagtibba very lightly. I used to believe the tougher the trek, the better the view and hence the experience. But Nagtibba trek changed all this.

There are two routes to attempt Nag Tibba, one from Pantwari village and one from Auntar village. Both the routes converge at Nag Mandir which provides the best camping spot to attempt the Nag Tibba summit. Hence, Nag Mandir acts as a lifeline to anyone willing to attempt Nag Tibba summit. I chose to do the trek via the Pantwari village route. It's a 6km trek from the road-head to Nag Mandir. At first, the trail starts as a uphill 2km stoney trail of moderate slope with a view over Pantwari and neighbouring villages.

After a 20 minutes break where I decided to have my pack lunch we set out for the last 2km of the trek which consists mostly of traversing through the tree line with timely uphill stretches. Then we arrive at Nag Mandir.  Near Nag Mandir are beautifull meadows with a direct view of Nag Tibba, the next days objective. It took us close to 4 hours to finish this trek and with all my belongings in a bag weighing 4-6kgs it wasn't as easy a task. We reached and we were  still left with an hour of sunshine, so our exhaustion was washed away with a cup of tea, some pakodas and sunshine. We saw the sun set over the valley in a melancholy of sepia. 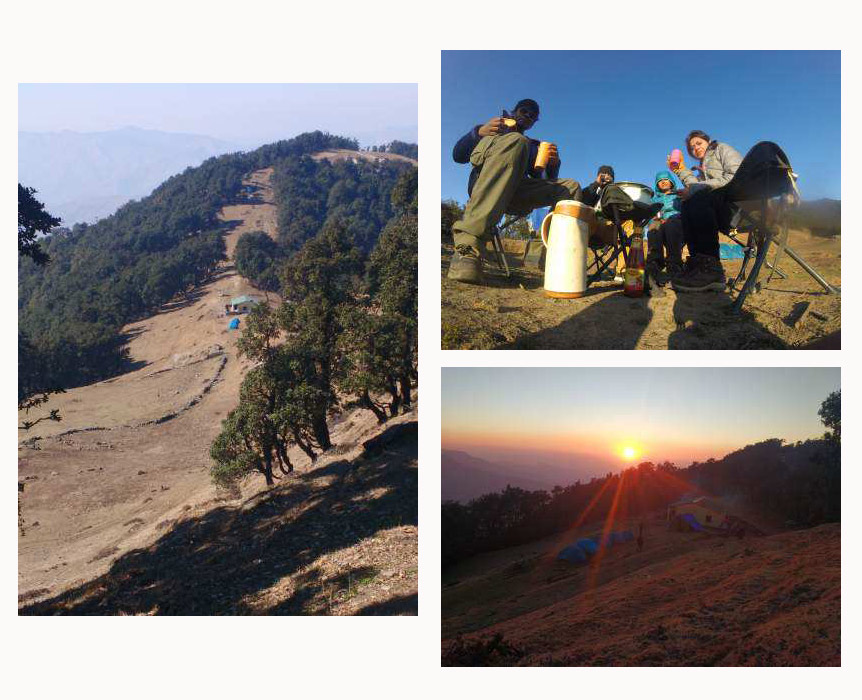 Time to eat our dinner and sleep early because the next day was the summit day. A lucky group we were, we attempted Nag Tibba on a oncoming full moon. Enjoying paneer butter masala under the full shape and glory of the moon left us with our breath taken. The glow of the moon from our tents was a sight of beauty. But the glow from the moon also lit up wrappers littered around giving me a perspective on relationship between humans and nature. I strictly abide by leave no trace behind policy but this time something told me I would do more. The nervousness of the summit attempt the following day deviated my mind and put the thought on the back burner. We slept off.
As the summit day approached I woke up at 5 A.M. trying to get a glimpse of the hiding moon and the raising sun. The spectacular sunrise  gave me the energy and the motivation to go for the summit. A part of the credit also goes to the delicious poha for breakfast. After a 20 minutes stretching routine at 9 A.M. we head out for the the summit. This last phase of the trek is a relatively short 2 km trek  but the gradient is steeper than the previous day. After 25 minutes of trekking uphill my body warmed up and got accustomed to the gradient.

After a short 5 minutes break for rehydration we walked one and a half hour non-stop to the summit on a mix of treeline and snow slopes. The old snow, hardened by the cycle of melting and freezing everyday, had become very slippery and this is were the spikes given to us came to play. The last 20km was gruesome. I could see the summit hands length away, but we walked 20 minutes to get to it. Upon  reaching the summit exhausted, the view from the Nag Tibba summit clears your exhaustion in minutes. A view of the valley stretching to mussorie 55km away on one side to the mighty peaks of Garwal Himalayas on the other. Peaks like Mt Thalaysagar, Mt Bandarpunch , Mt Blackpeak could be seen clearly from the summit. 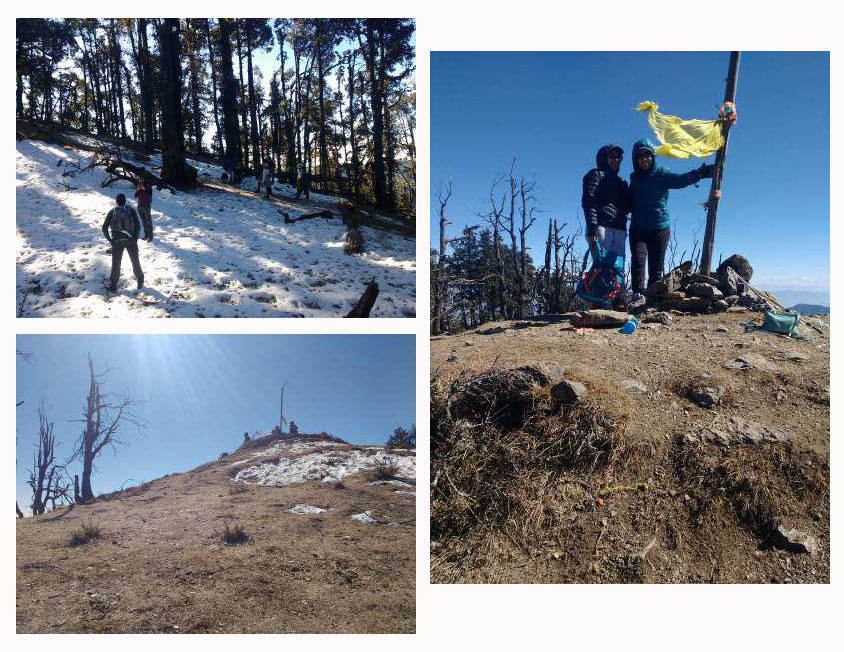 After 30 minutes rest and sliding down snow slopes like children, we headed back to camp. This downhill trek although hard on your legs only took 40 minutes.
Upon reaching back we were greeted with rajma chawal. After a great meal we headed back to our tents for a well deserved rest. but last night's spotting had moved me too much. Myself with 7 others from Biket team had decided to clean the area near nag mandir. We wanted future trekkers to experience the landscape at its purest. After an hour and a half of scavenging for non-biodegradable waste littered around the meadows we succembed to stop, accepting we have exhausted the landscape. We were very happy to have made a difference, however little. Each drop fills the ocean. 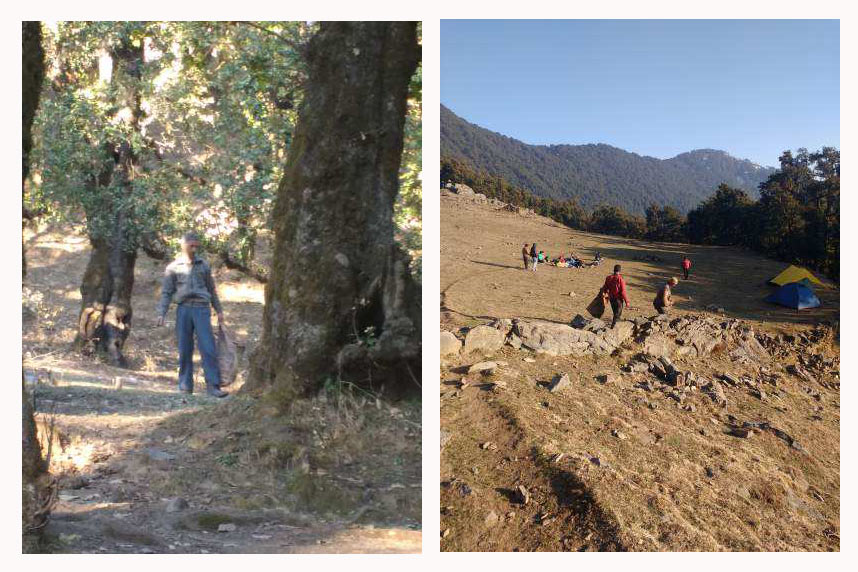 As the night drove in on us , the wind picked up. The wind-chill factor dropped the temperature a few degrees below the actual temperature which was freezing enough. As I crawled into my tent for a loud, windy and sleepless night I found comfort in my actions and eventually found sleep.
Next morning was the trek back to civilization through Auntar village. We head out at 8 A.M. Initial 45 minutes of the trail is uphill then the trail begins to drop. A beautifull trek to finish, first 2km was through the treeline. The next 3km was very rocky terrain . Around here, I could feel the altitude drop as the heat increased. The view throughout the whole trek overlooking the valley was mesmerizing. This trek, although downhill, was the toughest due to the distance. By the time I reached Auntar viillage my legs were screaming in pain. After around 6 hours of continous walking I made it to Auntar village on my way to Dehradun. 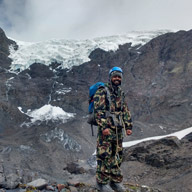