We are all well aware of the ban that was imposed in 2018 by the Uttarakhand Government on camping overnight in the bugyals / high altitude meadows of the state. More recently, Stok Kangri joined the club with trekking there banned until 2022.

While it has been wonderful to see more and more people take up trekking and other adventure activities in India, the effect this increased footfall has had on the eco-system of the mountains has been worrisome for us.

There were some measures we put in place to keep a check on this. Despite the financial disadvantage, these were some practices we followed right from the time we began operations.

2. We imposed an upper limit on number of batches per trail. Restricting group sizes seemed a futile move with no upper limit imposed on the batches heading into a trail. So batch numbers were capped to make sure we do not take more than 180 people per trail per season.

3. We also avoided fixed camping and practised rolling camps on all our trails.

Despite these measures, we noticed that some trails continued to remain more saturated than the others. In an attempt to channel some of the crowd out of these trails, the Bikat Exploration Team went into over drive. We extensively explored different states for newer treks/activities to introduce in our portfolio.

By the end of it, we had 48 fresh, winsome trails to offer to our community. Out of all the activities (58 in total) we now had in our product line, only 10 treks fell under the famous, commercialised category. This move, much to our delight, was effective in redistributing some of the traffic headed into the crowded trails.

But 60 % of our community continued to opt for the famous trails like Kedarkantha, Rupin Pass, Brahmatal and Buran Ghati (which incidentally forms only 17 % of our product line). This was still a heavy number for the fragile eco-systems of these regions.

It is not that the newer trails were any less exciting or beautiful. The crowded trails simply happened to have been around longer and grew more popular through word of mouth.

We realised we had to do something more. So, we began studying and analysing some of our past data to get a better picture of what was happening and why.

This brought two insightful but perturbing trends to light.

1. The bookings spiked on certain dates and dipped on others. 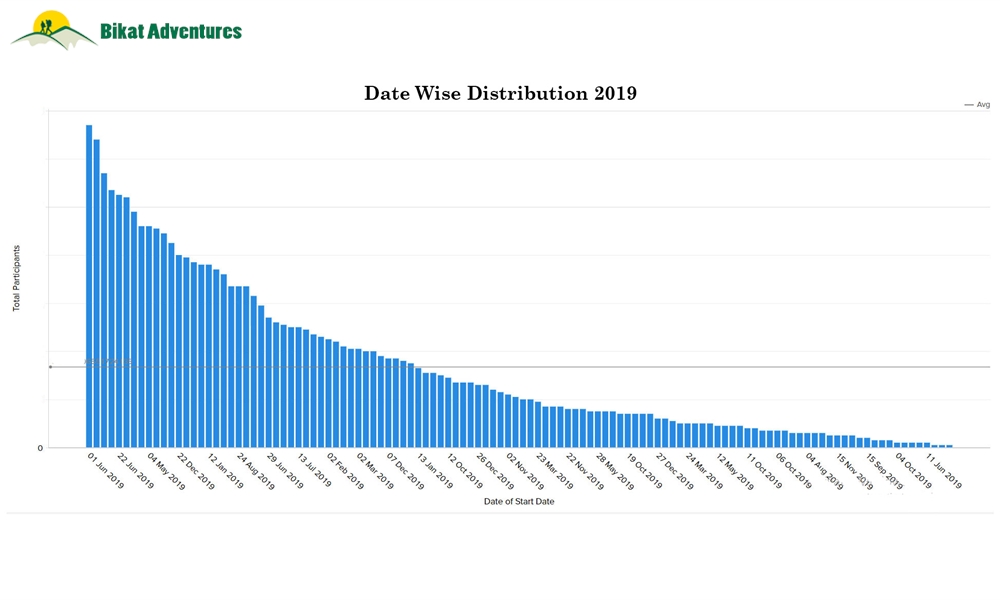 In 2019, 70% of our participants booked their treks around 33% of the dates. Christmas and New Years’ time, Independence Day (which fell on a Thursday and could be clubbed with a weekend) etc were more sought after than the others.

2. The batches starting on weekends received an alarmingly high proportion of the bookings. 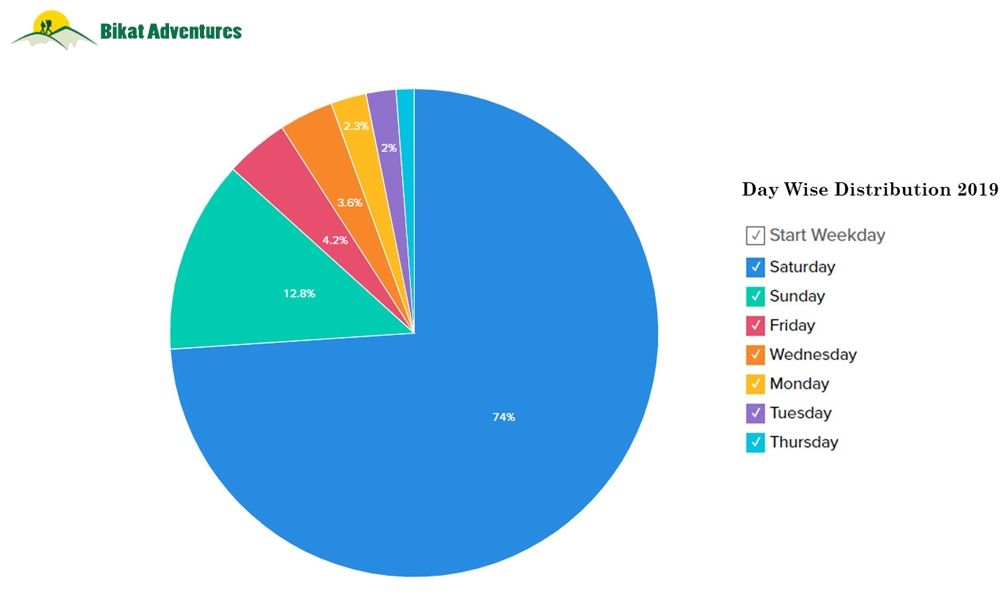 74 % of our trekkers booked treks that started on a Saturday while 12.8 % of trekkers opted for treks starting on Sundays. Only a miniscule portion booked treks falling on weekdays.

And this is from the data of just one organization. If we collated these trends with other trekking agencies, we imagine the final picture would look something like this. This was Brahmatal during Christmas time last year. The plight of Kedarkantha was worse.

Measures like restricting group sizes and number of batches although effective were not enough to tackle this highly skewed inflow of trekkers into the mountains.

If these trends continued, it wouldn’t be long before popular trails like Hampta Pass, Brahmatal and Kedarkantha get banned.

This sporadic inflow has had immediate consequences on the ecosystems of treks like the Chadar Zanskar.

Deep Shah, who went on the Chadar Trek with us recounts the following incident. He was a part of one of the last few batches that completed the trek before the frozen ice gave in and we had to call off all our batches.

“Attempting the Chadar Trek has been a dream of mine for a long time. But little was I aware of the life altering experience that awaited me in some of natures’ extremes.

While returning from the summit, a frozen section of the river had broken down. We were stuck on a small island for the night with no way forward. With people from other trekking groups also camping there, there were over 200 of us on that small island that day. And all of us were hoping the river would freeze again overnight.

But the ice did not form the next morning. So it was decided that the river would be crossed by foot. And thus began our adventure.

We held onto ropes for support and stepped into the icy waters of the Zanskar River bracing ourselves against the cold.

With each step forward, the water levels rose steadily seeping slowly into our gum boots and gradually rising all the way up to our waists sending our bodies into a state of shock. I could hear shrieks and yelps from behind me as I crossed the river.

Once we stepped onto frozen ice we were instructed to quickly change into dry clothes and empty our boots of water. ​I sat down on the icy floor and tried to remove my gum boots only to find them stuck! The boots were frozen. My trek leader asked me to warm myself up by moving around continuously to get the boots off.

It was an experience that was both horrific and exciting.”- Deep Shah

What the industry needs to do at the moment is spread the bookings received evenly across the week.

The idea of introducing dynamic pricing on our treks popped up around this time. Although uncommon in the trekking industry, it seemed the perfect solution to the problem that confronted us.

“When we sat down to brainstorm the idea, we studied the models of other competent industries that engaged in services similar to ours. In particular we looked into the pricing models of Airlines and Movie Theatres.

If you book a flight on a weekday or a movie in the morning show, you are likely to get better offers because of low demand during these dates / times. Selling at lower prices on less sought after dates/times not only helped them utilize their capacity better but also helped pass on the benefits to the customers” – Girish, One of our Founders

We feel introducing a Dynamic Pricing System on our treks is not only the right step forward but also a necessary one to adopt given the current trends.

So after much thought, research and discussion, we zealously began building an algorithm in January.

“The algorithm incentivises bookings made on less sought after days, dates and trails by offering a greater quantum of discounts.

The idea is to not only incentivise bookings made during the weekdays but also encourage trekkers to make their bookings early. This in turn would give them enough time to prepare well for the trek/expedition.

So if you could arrange with your work place to move your holidays by a bit, one could actually end up saving big by booking their treks under less sought after batch dates.

There were other collateral benefits to this move as well. For instance, an even inflow ensures a regular source of income to some of our mountain staff like our diligent porters or the lovely locals running guest houses in the region.

The trails would also look far more pristine and beautiful with less crowd.

And finally there is the best part of it all: the much needed respite this would bring to the eco-system of our Mountains! ”, – Girish. The more we worked on this, the more excited we became. Over the last two weeks, we have been pondering over whether we should launch the algorithm now (as was our plan initially) or put it on hold, given the uncertainty in the situation.

After much deliberation, we have decided to go ahead and make it active on our website from today. These changes will be visible on all our itinerary pages. Feel free to visit them and expand on the dates bar to know more.

Launching this after the lockdown, once bookings resume, may have made more sense from a business point of view. But launching it now allows us to use this lockdown time more productively and spread some awareness about the ground realities of over-crowding on trails.

As disheartening as the current situation is and as bleak as things seem, the battle we are all fighting now is bigger and more crucial. We hope you are staying indoors and keeping safe! Do remember to follow all protocol, stay alert, stay kind and keep a check on your mental health.