Laws of the Jungle : A Weekend Trek to Tirthan Valley

Any weekend trek starts with a thought of taking a break for people who have been to treks and experimenting with the world of trekking to the new comers. However, eventually what both type of trekkers realize at the end is that it was a bit more than that.

We started the journey in Volvo moving to Mandi. Many people were new to each other, so some interactions started in the bus but due to the spread of seats,its not possible to mix up with everyone. While some of us watched the movie that gets shown in the bus, some others were reading or having some relaxants.. After having our dinner at Karnal, most of us slept off soon to wake up early next morning in Mandi. Our tempo traveler could not enter Mandi district, so we joined it at the barrier where Mandi district ends. The journey from Mandi to Gaushaini ( around 80 Kms ) is not long and most of the way is either along Beas or Tirthan river, so it doesn't tire you much. We stopped at Sairopa (GHNP office) for the entry permit and soon reached the starting point - Gaushaini. Here we met our local guide - Basant and other porters ( 7 of them ). We quickly distributed the essentials for the trek - pack lunch, mug, mes-tin and spoons and started moving to Rolla. Way to Rolla is too steep with a total distance on 8 Kms. Ropa is a small village that we crossed and some of us had the luxury of having 'Buransh' sharbat at a local shop. The way to Rolla is full of small waterfalls and wooden bridges that tempt you to take a dip but we kept moving thinking that may be trying the bath in return would be better. Tirthan river greets you through the way with its mild musical sound of flow but sometime is does show you the aquatic energy that it carries by creating large falls on its way. 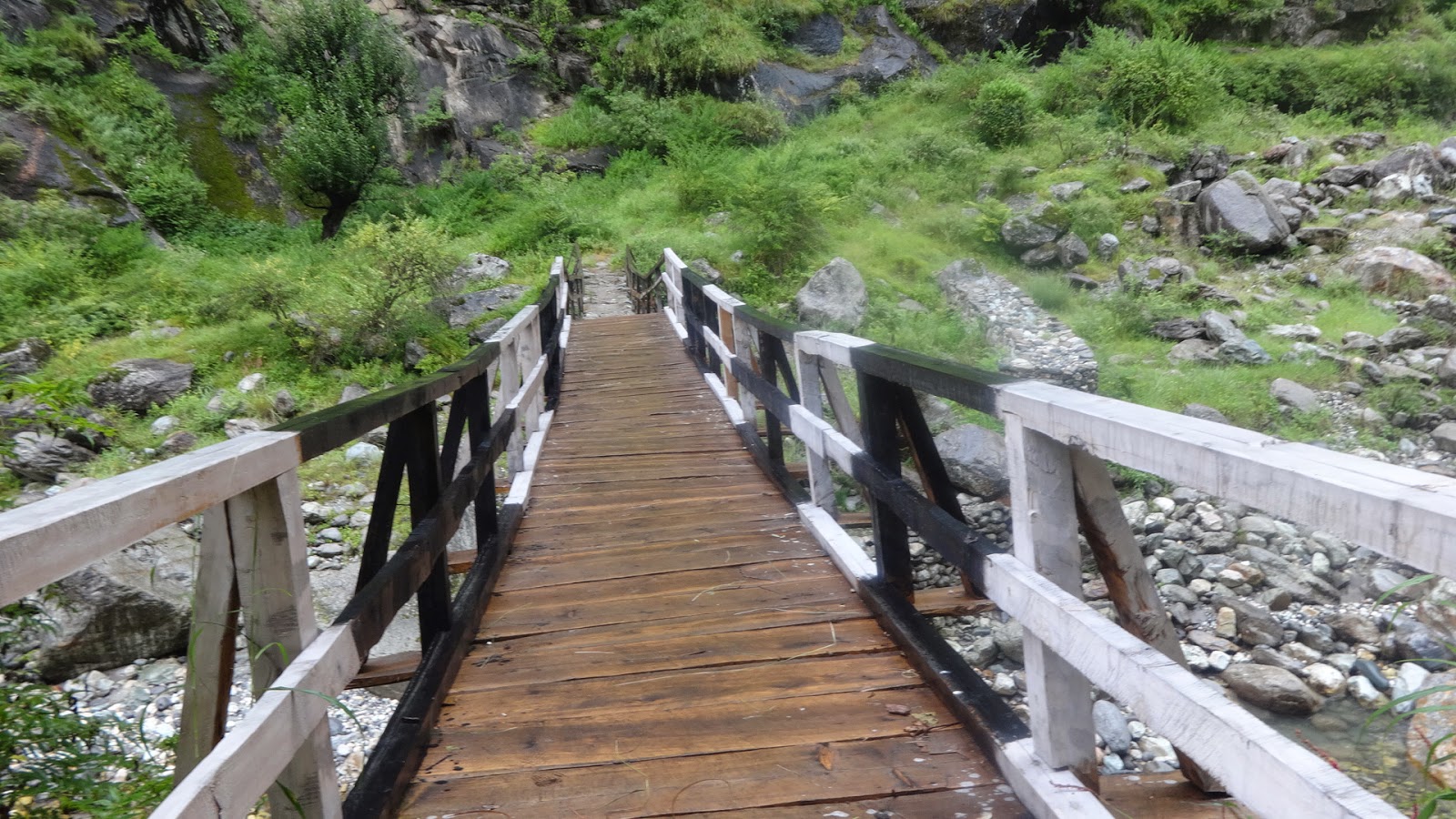 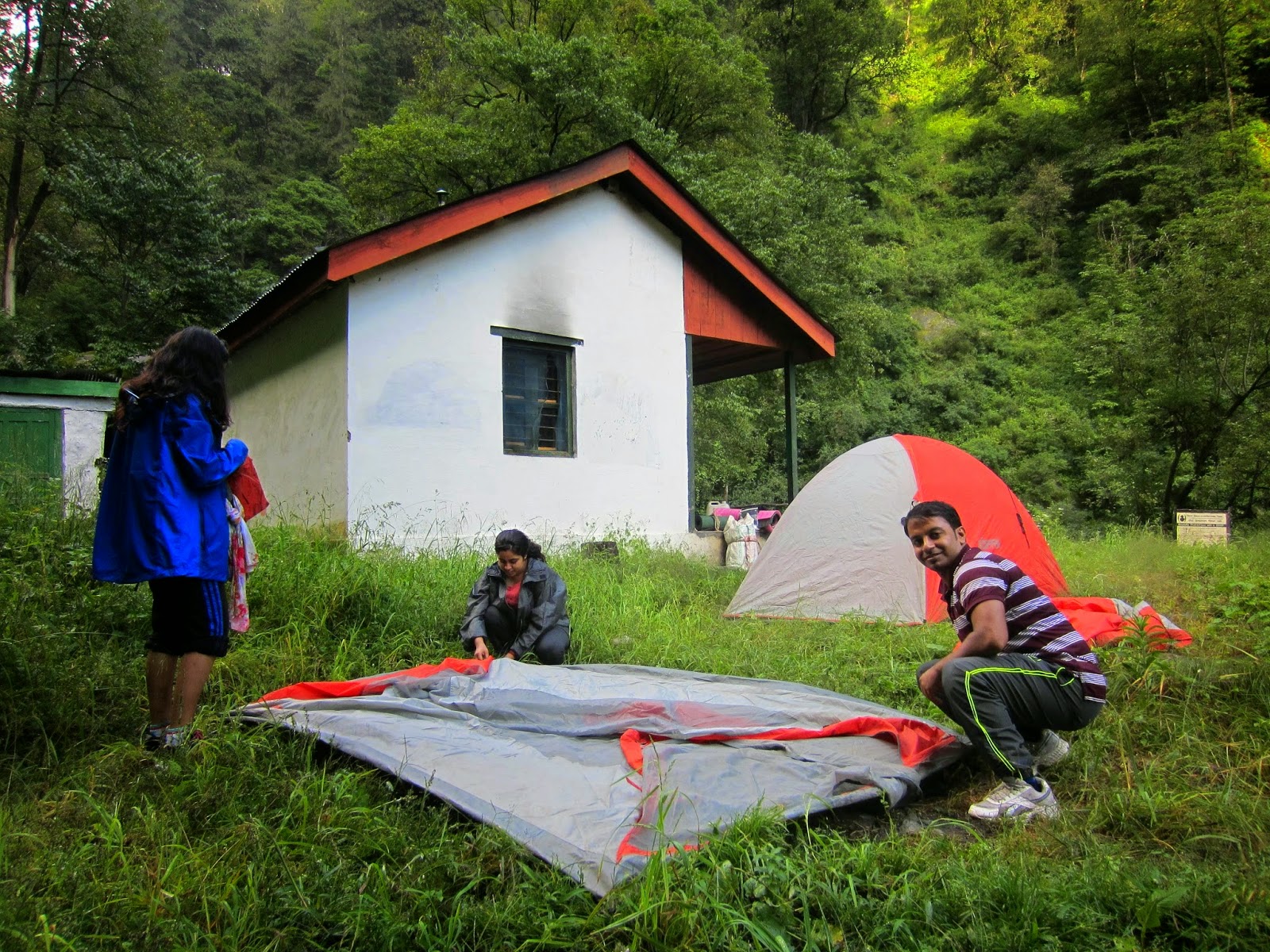 All of reached Rolla quite fast, overall we took only 4-4.5 hrs to reach there. Camping site at Rolla is quite nice with river flowing on one side, huts providing you shade, log woods cut out around the bonfire, and plain patches for tents easily available. Its a well developed camping site, one must say. Bon-fire was lit up and soon the highlight of the day - trout fish pakoras were served. Awesome! I have never had a better fish in my life. No wonder they call Trout one of the best fishes, ultra thin bones that you can eat along the flesh with very fresh taste. People will kill me if I don't thank Nillu (the cook) for the preparation. Songs (Wakeel refusing to start any and too many from me), Shagun's veg pakoras, shayari ( Abhishek G turning to kumar Vishwas), Regular interventions by Rajat to keep the fire on, Rajat creatively (or should I say unknowingly creative!) mixing halwa in his plate, were some of the evening highlights.

To sum it up Day 1 was quite eventful and everyone had the perfect start for the weekend party ahead.

We started a bit lazy today since the day had only 5 Kms to cover. However, so it turned out that all of the ascent was steep and it was not easy (to say the least!). Abhishek (not Mr. Gupta) was not feeling well since morning and soon realized that it would not be possible for him to go further. He requested to stay back at Rolla itself and wait for us to come back. I tried convincing him to move ahead and come over his fears but sometime you hit a mental block and that's what happened with him. We gave him a sleeping bag, mat, etc and moved ahead. Everyone was finding the climb challenging but gradually most of us found the right pace and kept moving. The way is full of long herbs with some of them having nasty cactus like spines that gave many of marks on legs and hands. Soon some of us moved quite ahead of others ( Malara, Shagun, Rajat, and Anurag ). They had the luxury of a quick nap at Shilt (target for the day). Most of the trek is full extremely dense vegetation with many many colors all the way. Flowers with yellow, red, violet, and many other color combinations were visible in plenty. Saurav was struggling a bit in the later half and I was continuously talking to him, trying to keep him motivated. For those who challenge themselves for the first time on a trek, it is all about setting a mental standard. Sometimes you can give up easily but believe me its all about breaching that mental block and once you do it, your confidence goes to another level for life! I share many examples of how people who were about to give up on a trek, fought that bit more, and breached the threshold. Now some of those people are always the front-runners in any expedition! So Saurav breached it this time and we all reached \Shilt by 1630 hrs. He was greeted by other members by claps and whistles on the destination. 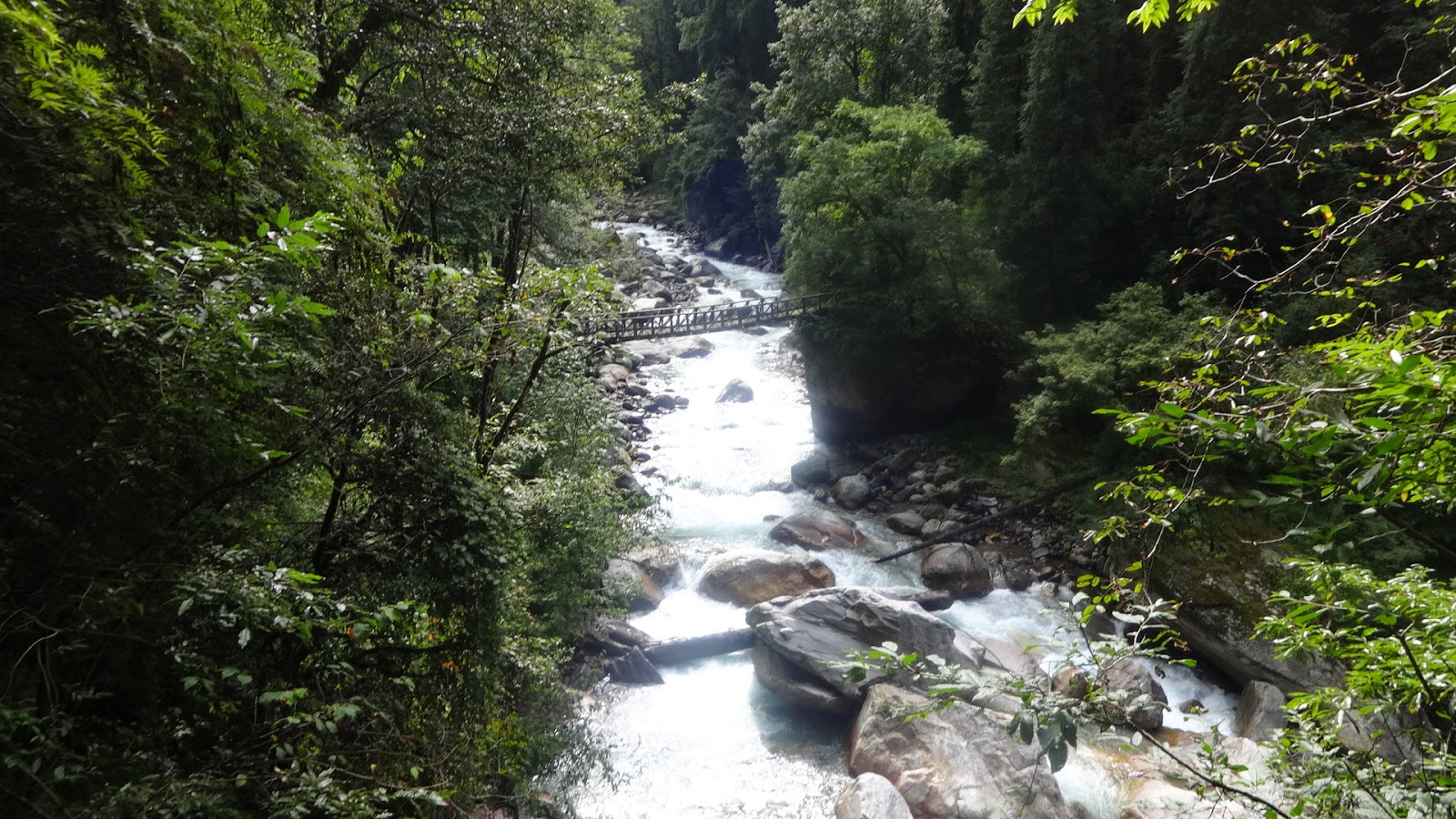 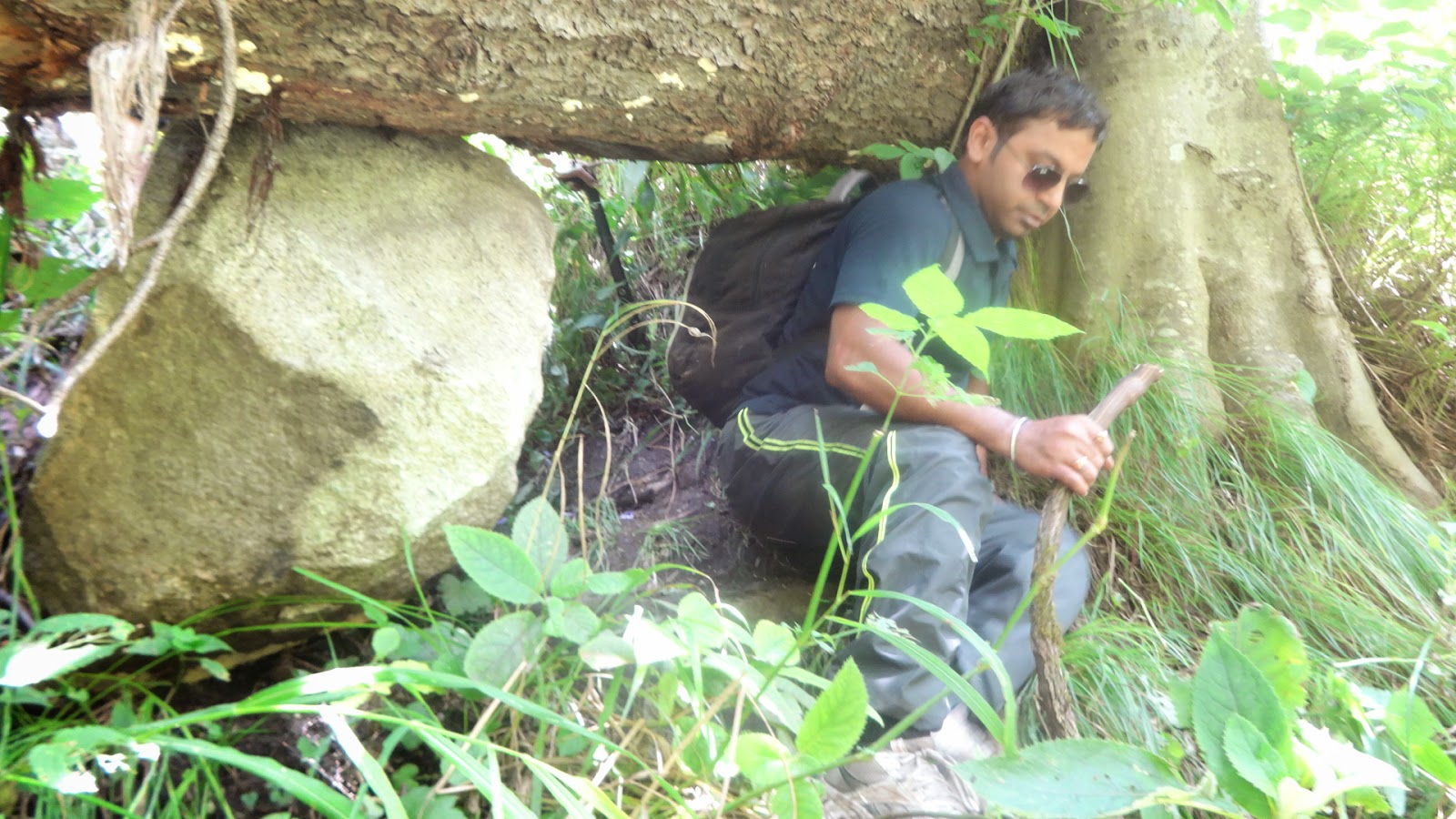 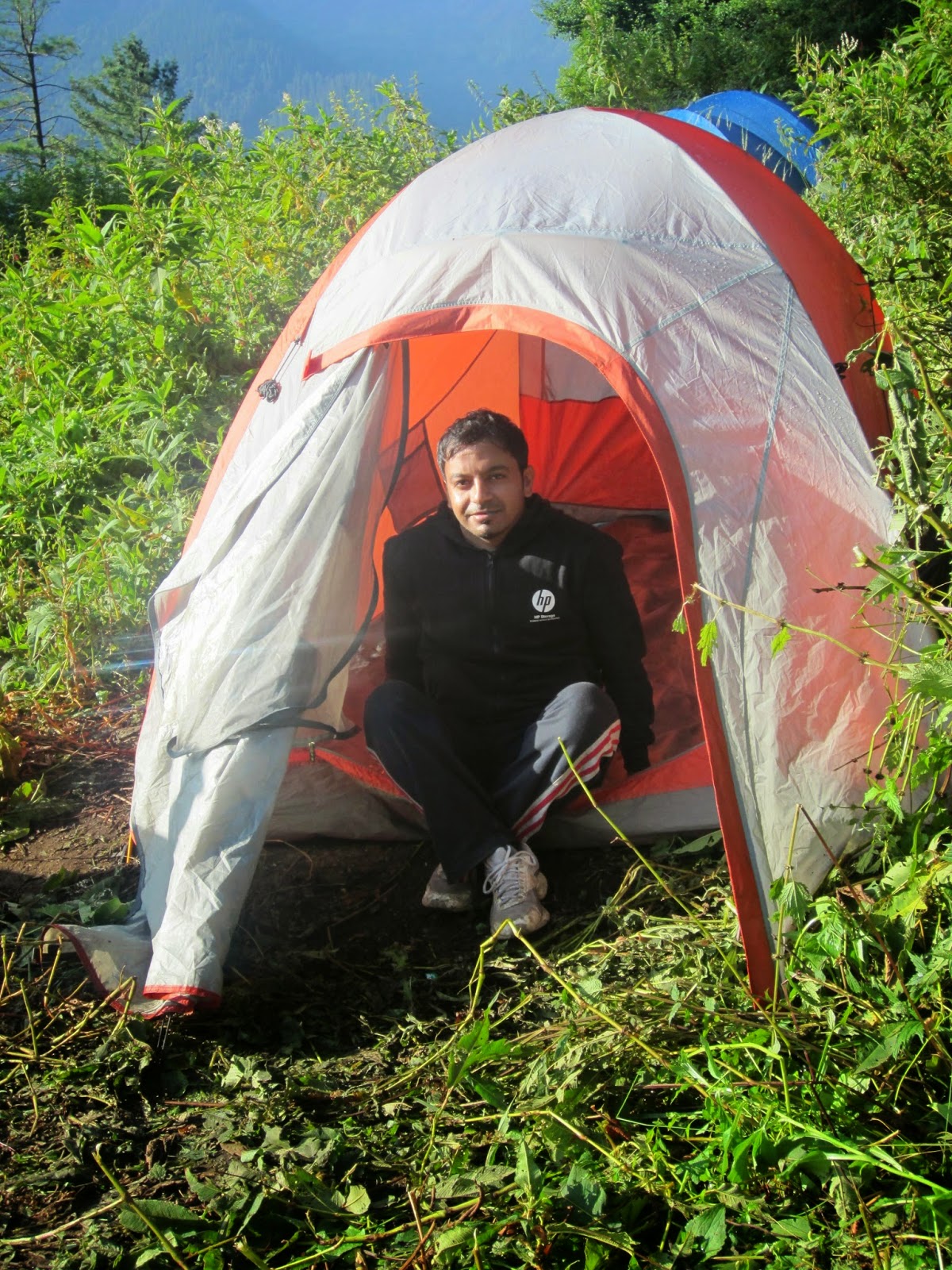 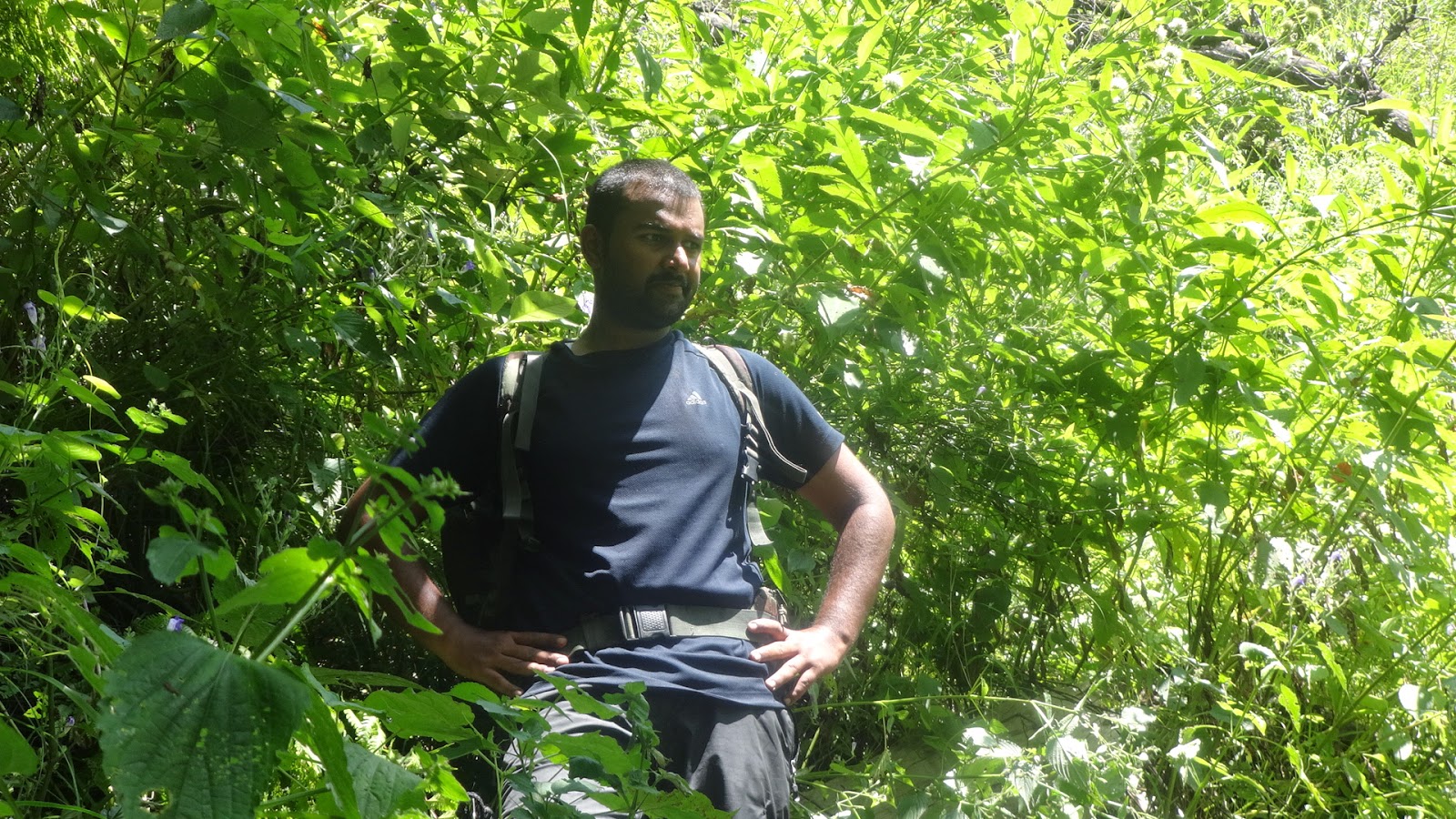 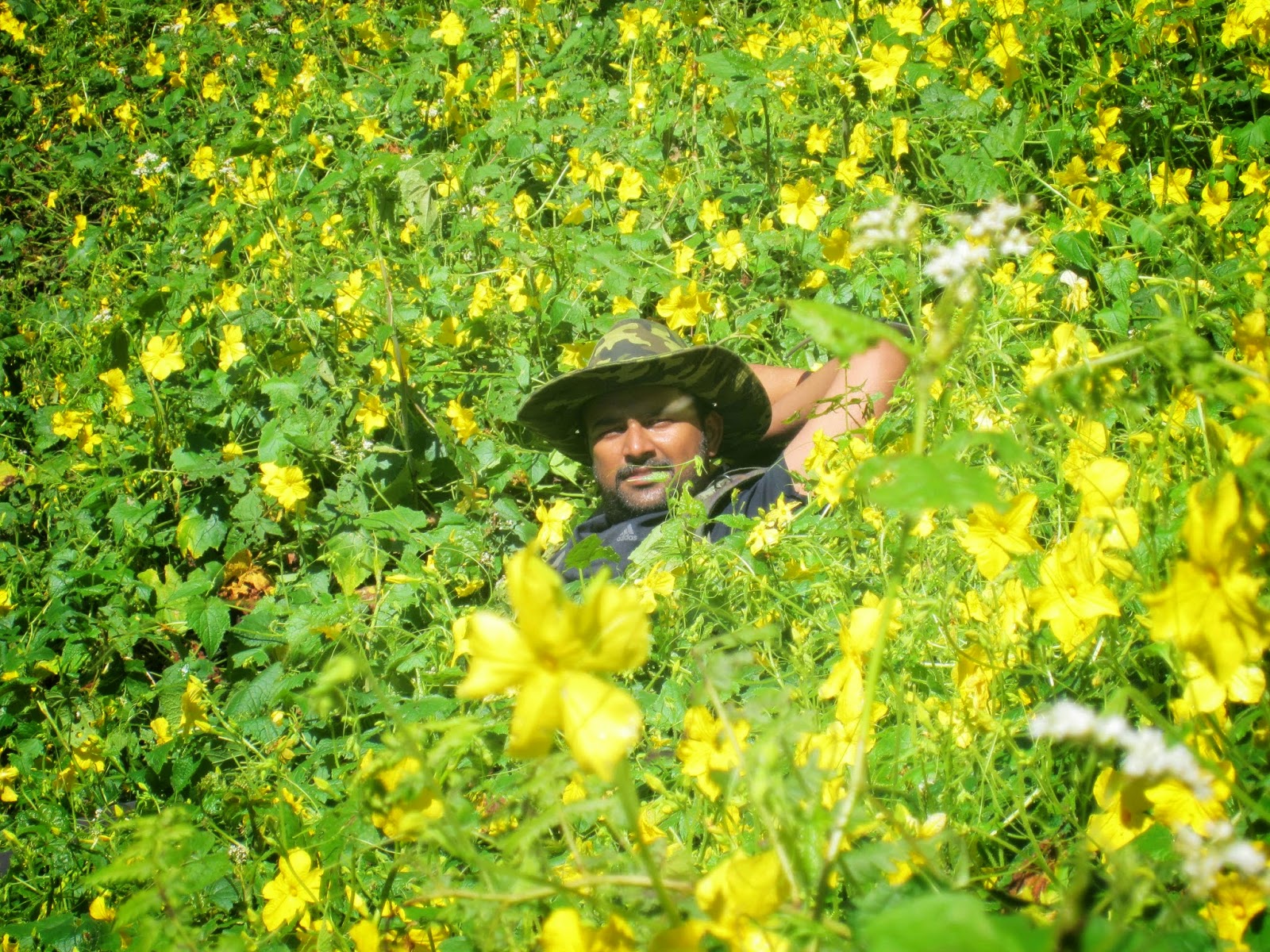 Evening bon-fire was a little disrupted because of drizzle but the view in front was inspiring. We had all cloud cover in the front side (all ridges were covered) but a clear sky on the back ( all stars and moon visible) . The contract was amazing in deed, at least, I had never seen such contrast till now. Gradually the clouds were on us and drizzling increased. We sent a porter with food for Abhishek M (who had stayed back at Rolla) to ensure that he is safe and sound. We had our dinner and Kheer which was awesome again and went to sleep in the tents.

I think I have missed something in this day but ....

Day 3 had to start early because we had to go back all the way to Gaushaini and reach latest by 5 pm. So everyone woke up early and the sunrise was breathtaking. Mountain ridges in the front not wanting to leave the clouds who had stayed there for the night but the rising sun accompanied by the winds making its way over the peaks. All at the same time, clouds, sun, peaks, made the view brilliant and I kept gazing for a long time. Gradually the sun overcame everyone else and was shining bright, this was good news for us because we can now hope for a drier way back (post the drizzle, it could have been quite wet & slippery). We clicked our group photos here and moved on.

The way back was not easy at all especially till Rolla, the descent was steep and people were feeling the cramps in their thigh & calf muscles. We had planned our pack lunch on a waterfall that had tempted on our way upwards. It was around 2 Kms from Rolla towards Mobile point. I came along with Sudha, Pooja, and Sonal to reach Rolla at around 12 noon and from there I moved a bit fast to join others on the waterfall ( I really wanted that bath). When I reached, Anurag, Shagun, Rajat, Abhishek G, and Asheesh had already taken the bath and were feeling relaxed. I also entered the fall to gasp for breath because when you hit that chilled water, it makes your lungs contract ( I guess! ). Abhishek M had moved forward, he might not have had the fun of completing the trek but he did have the fortune of spotting a beer on the shores of Tirthan river.

After the fall, we moved towards the mobile point where some of us had lunch. The way back to Gaushaini from Mobile Point was not too hard to maneuver but some of us were really tired and hence walking slowly. Me and Sudha walked together on a long stretch discussing many social issues and how we can do something about it, hopeful!

We reached Gaushaini by 1720 hrs. We were running a little late, so without wasting much time, we moved towards Mandi in the traveler. Boarded the volvo from a barrier just before Mandi but everyone was quite hungry and hence eagerly waiting for the bus to stop.. Finally the bus stopped and the hotel (to some people's dismay) was vegetarian but this is how a strong will can change the fortune. All credit to Anurag, we got to eat chicken in a vegetarian hotel! 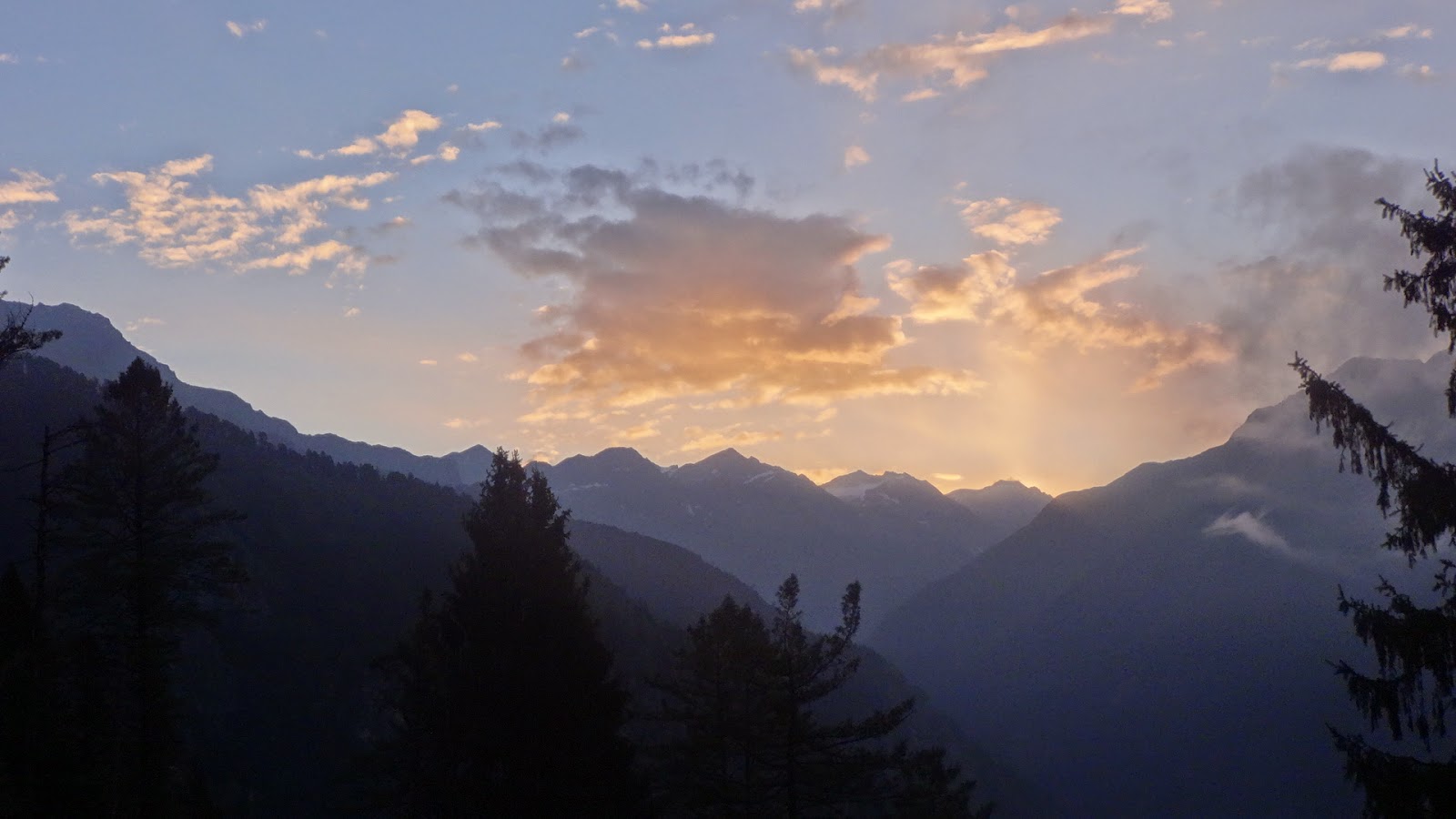 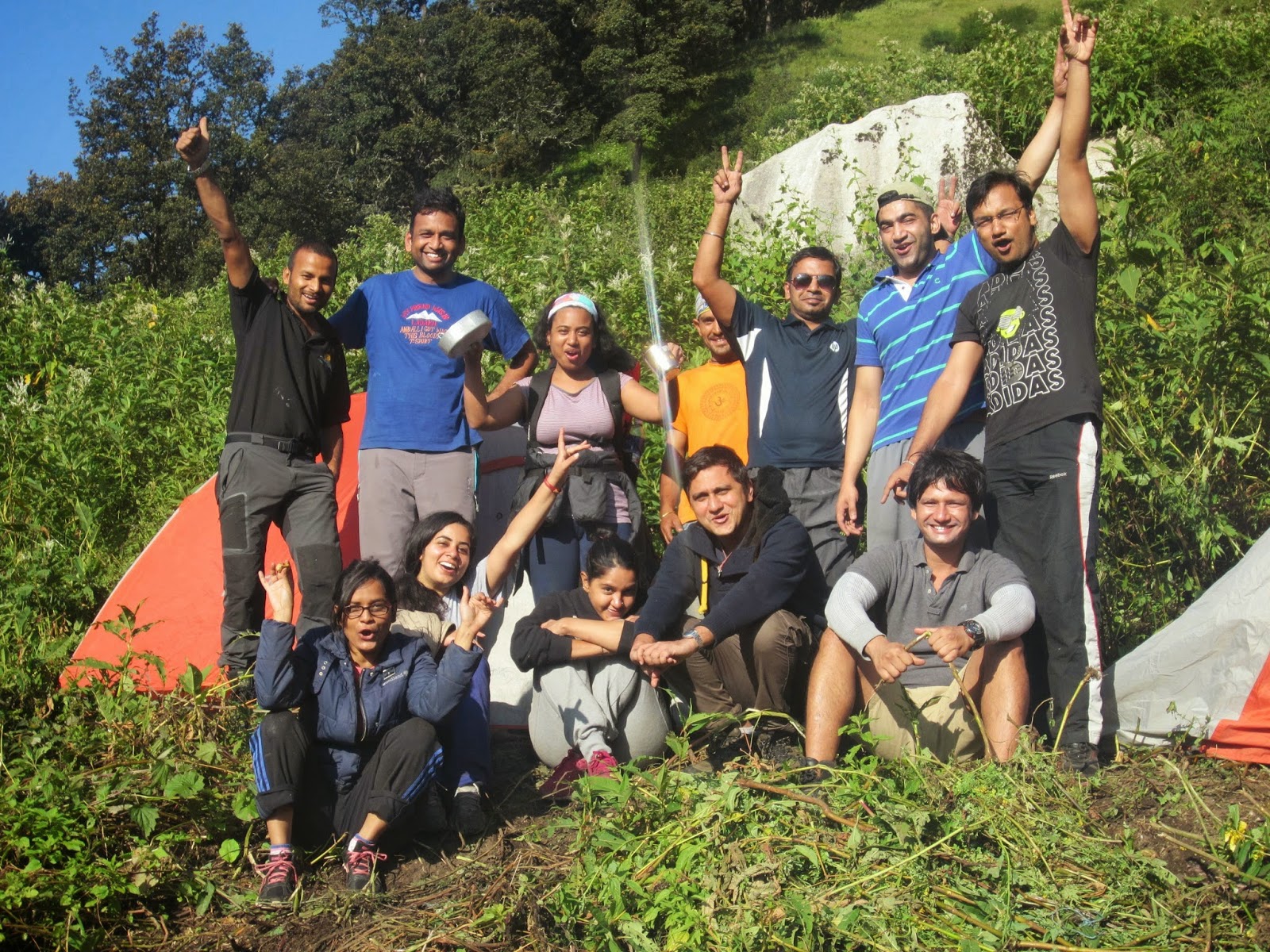 We reached Delhi early in the morning and the journey was over. Like any other weekend trek, this one also made us richer with memories but at the time left us wanting for much much more...