My Conversations with Panwali Kantha

After standing for 10 minutes on Rishikesh bus-stop I realized that I am missing something - “my specs”. I froze! Quickly ran towards the bus to check if I left it on my seat. The bus was luckily standing there. Sigh of relief!

“This is why I don’t carry specs while traveling. But yesterday evening I came directly from office and took the bus to Rishikesh. So could not avoid this mess.”

The bus took six hours from Delhi and dropped at Rishikesh bus station early in the morning. We were waiting for a taxi to take us to Guthu, the trek starting point. It was 4.30 in the morning. I slept as soon as I got a seat in the taxi. The driver said it will take around 6 hours to reach. Then there was a breakfast on the way. Even though we were tightly packed in the taxi, I was feeling cold. I managed to take both my legs up with knees bend and curled upon my knees.

On the way the driver woke me up near a beautiful Lake called “Tehri”.. The first view clicked by my mobile when the sun was still rising. 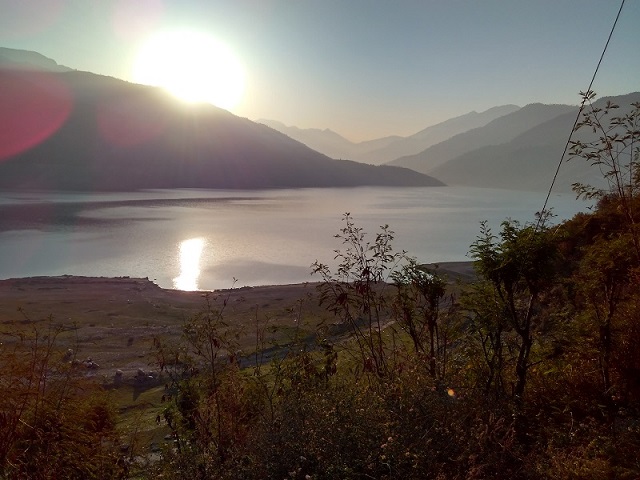 We had breakfast on the way and reached Ghuttu in the afternoon around 1 PM. Got down from the taxi and yes the trek was on.

Ghuttu is a beautiful small town at a height of 5000ft. I was told that the trek today is gonna be small and easy. We were scheduled to reach our first camping site Gaurmanda in the evening before it gets dark. However, the sun had all together its own plans. The walk was challenging. Within 15 minutes of walk I was dehydrated and exhausted. The temperature was so high to climb with backpack on shoulder. Soon I was the only trekker crawling on the trail as all were half a kilometer ahead of me. The trek leader Rehan began with his inspiring stories to boost me up. To cheer me up, he shared his candies too.

Having reached Gaurmanda we all were served soup and assembled to a spot which had a clear view of sunset. The color of sky was changing within a blink of eye. It was so damn mesmerizing. Clouds were adjusting to synchronize with movement of sun and gradually it was getting dark.

We were then taught the basics of mountain surviving skills and “how to pitch a tent”. I was given a single tent and thus was very attentive to learn the skill as I was supposed to pitch the tent on my own for the next three nights. 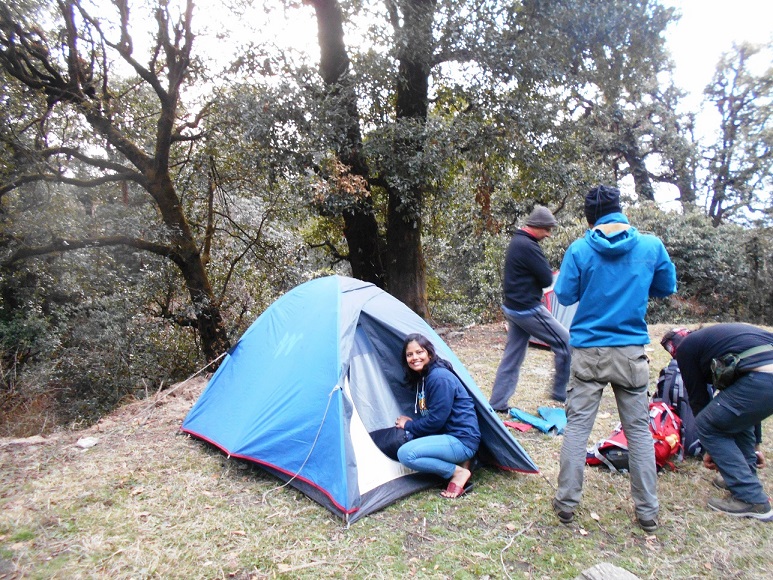 I tell you, it’s so fulfilling to pitch a tent by yourself, sit inside peacefully and get things arranged. And of course taking selfies is a bliss. 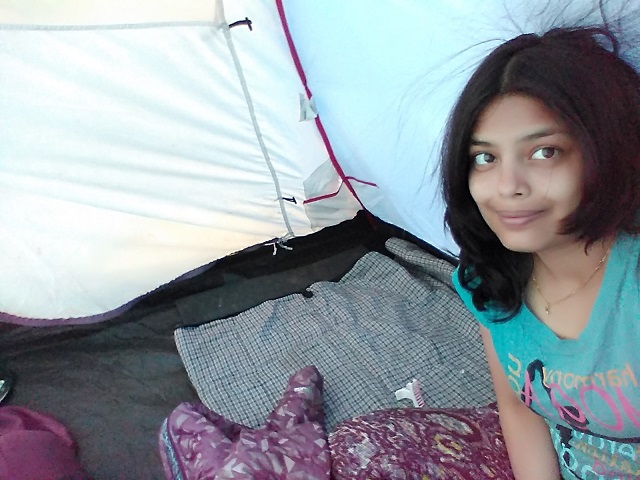 Rehan, the trek lead, also taught us many skills which we enjoyed a lot. He involved everyone in the survival activities, it felt as if we are really stuck in the mountain and struggling to survive. Like we see in the Discovery and National Geography channels. During this exercise I got chance to mingle with the group - a group of eight trekkers. I observed closely.

“I was amazed to see how this trek has brought the diverse set of people together. There were experienced trekkers of nearly 60 years old and fresh graduates in their early 20s. All were passionate about trekking and taking up the challenges in life. Every soul was carrying a story of struggle, hard work, their aspiration and inspirations, goals, fear, etc. We discussed that one moment which pushed us to trekking, many stories came up.”

We left the camp early in the morning and began to climb for Panwali Kantha – the summit. I began to walk fast and was in the lead. Well, it lasted for 10 minutes :-P. One by one all crossed me and went far too ahead of me – “like always”. The forest was thick and the trail was steep. I sat beneath the shelter of huge trees. Rehan was pushing me again, telling me how amazing the view is waiting for me. I said ‘I have access to Google pictures’. We argued.

“I observed how patient and determined he is. He never gave up on me. This is what mountains do to people. Make them tough and train to not get demotivated. Mountains can naturally prepare leaders and develop perseverance. It teaches to enjoy vulnerability. The changing climate of mountains educates us on the importance of planning. The whole set up on high altitude is like a University, lecturing on life.” 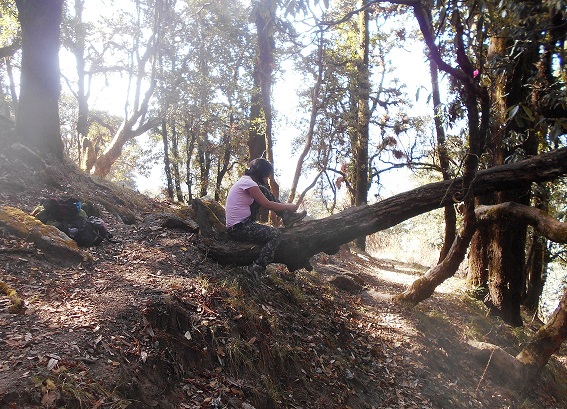 There were many huts which took my attention. I was told that they are not for humans, they are made for animals. I went into imagination mode. Those huts were cute and dark. Had no windows, low ceiling and doors having height not more than four feet. Mostly build of stones without using any adhesive. I like such temporary settlement. 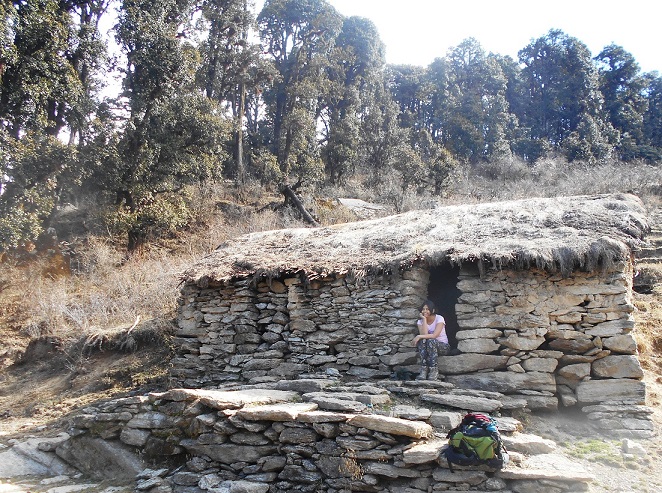 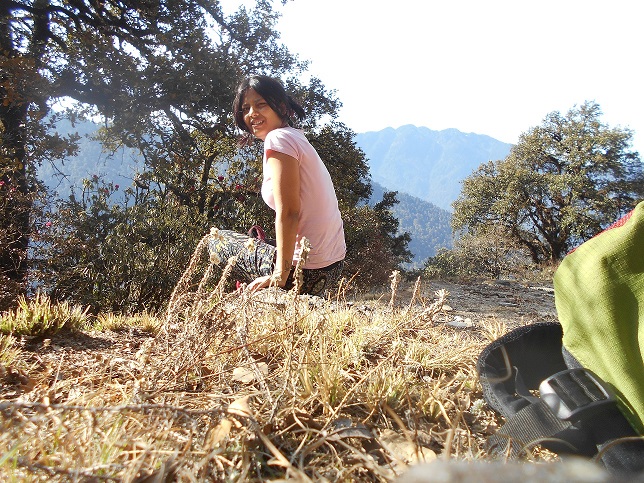 Having crossed a km of thick forest the landscape changed to multi color canvas. There were patches of snow, greenery, vast grass lands, big boulders etc. Feast to the eyes. I love white colored earth with absolutely clean and blue sky. Mmmmm. It feels so soft and fresh. 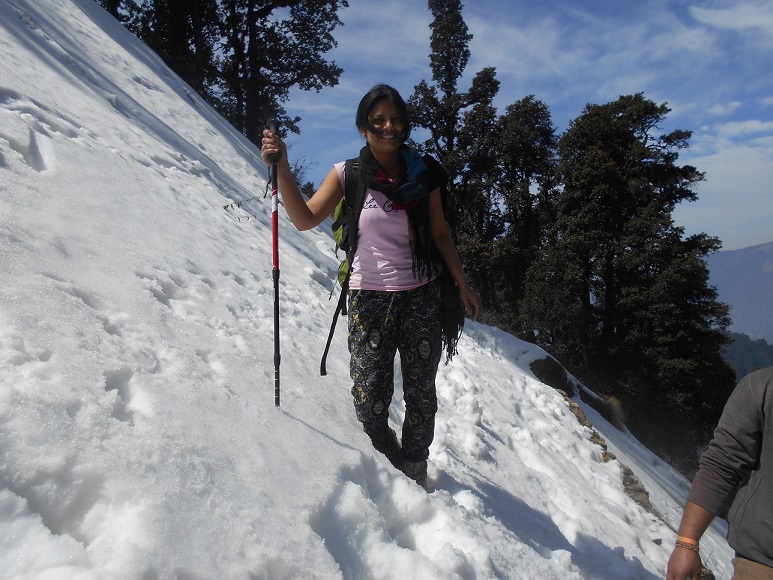 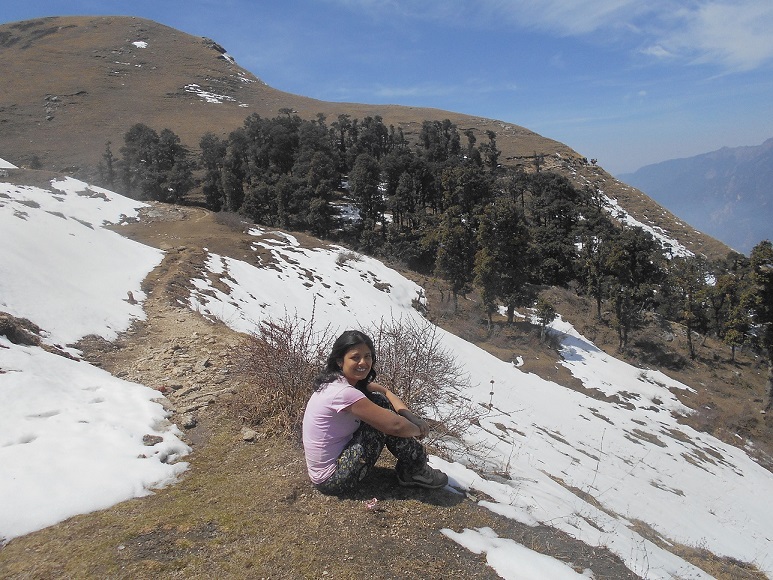 As I was walking two kms slower than my fellow trekkers, I could not manage to take pictures with them. I had only the trek lead pushing me constantly. This is Rehan – the trek lead. 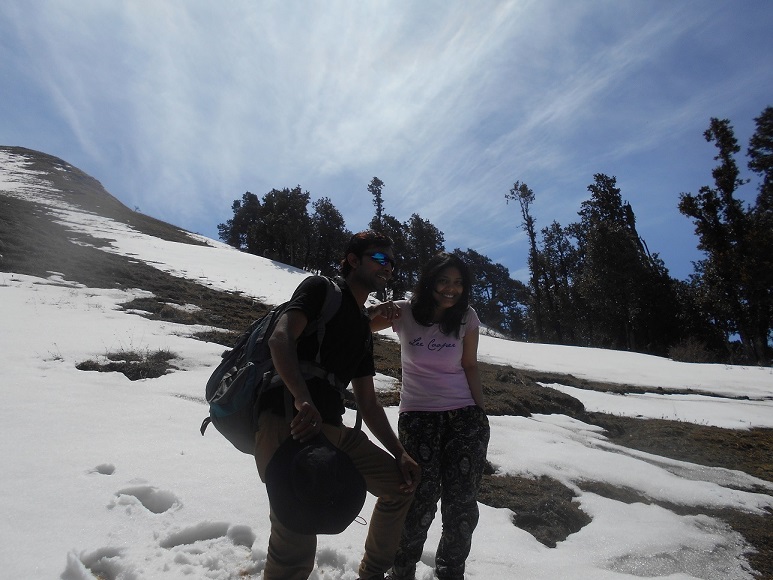 Its not that I am slow in trekking. I am slow at everything. I take my time. Yeah but I become a snail when it comes to receive nature. I have a different concept alltogether.

“Take a moment. Look around. Talk to trees. Look at the clean and blue dust free sky with patches of moving clouds. Relish the cocktail of beautiful colors which nature is offering for free. Try to remain still when a beautiful butterfly is around with amazing combination of royal blue and orange feathers. Imitate the birds chirping. Invade the privacy of the animals grazing around, take photographs with them and make them blush. Take a moment, sit, smile and think about this beautiful thing called LIFE. Feel the connection with nature, let mountains echo your voice, sense the breeze which accompanies you everywhere, let your worn-out complaining legs struggle more, witness the touch and taste of fresh snow, experience every bit of it. Acknowledge that away from the city’s chaos and stampede, there is such a captivating world.” 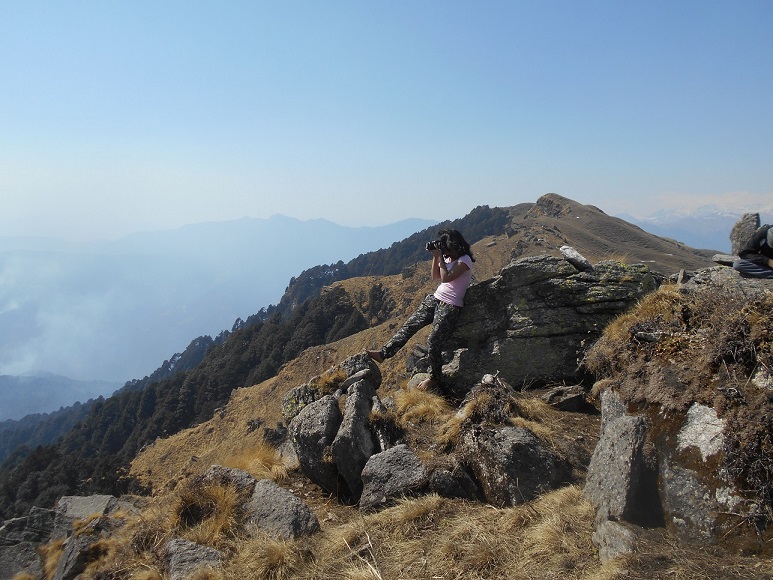 As soon as we reached the summit, we went crazy with the amazing view. Got music played, sort of danced and took thousands of pics. I got a chance to catch up with other trekkers. 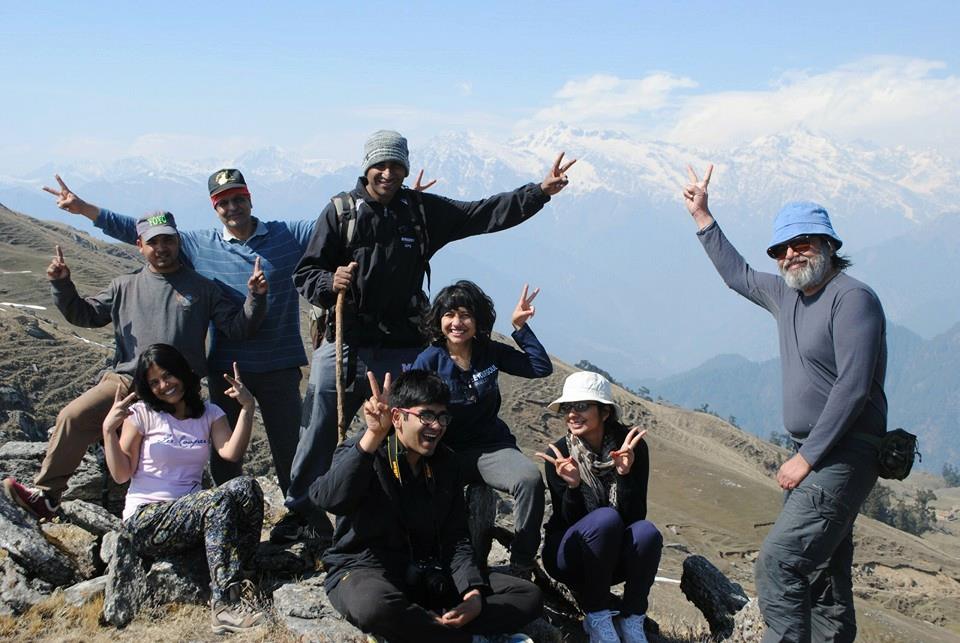 We camped half a kilometer away from the summit. In the evening, we all gathered for bon fire. Well, it never gets boring to sit around a bon fire. Actually cold weather makes it inevitable and more enjoyable. The cook Krishna was an amazing guy. He put his best in every meal. He never allowed me in the kitchen though. As if I will steal his recipe and breakthrough the food industry.

‌The third day we followed the same route from Panwali Kantha to Gaurmanda. So the trail was same. But since it was downhill, I was relaxing and I was taking my time (I know nothing new). Saying differently, I was going at my pace as there was no hurry to reach anywhere. 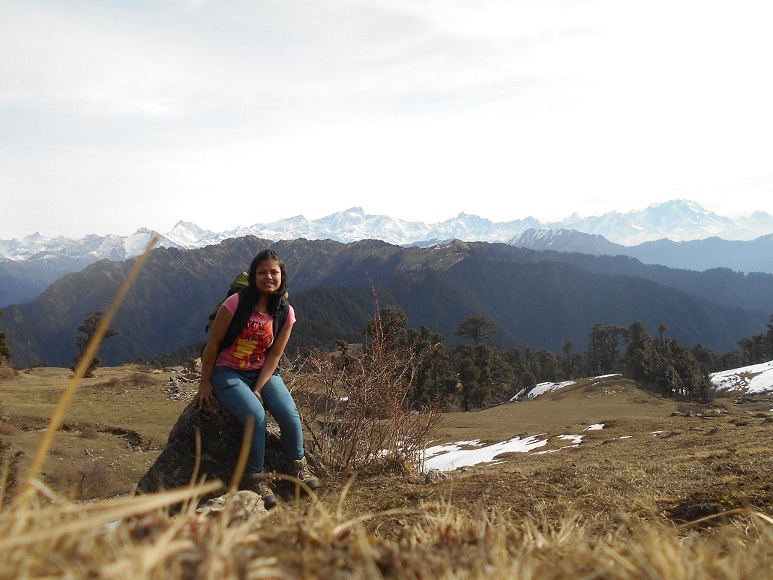 But unfortunately nobody promoted my idea of trekking. All were more like to win a trophy. As if there is flight to catch or a celebrity to autograph. “Rehan” I asked “Do you have any plans to distribute the winner and runners up kinda certificate”. He stared and gave a tough look. I wondered that way their hard work to reach first would have made more sense. 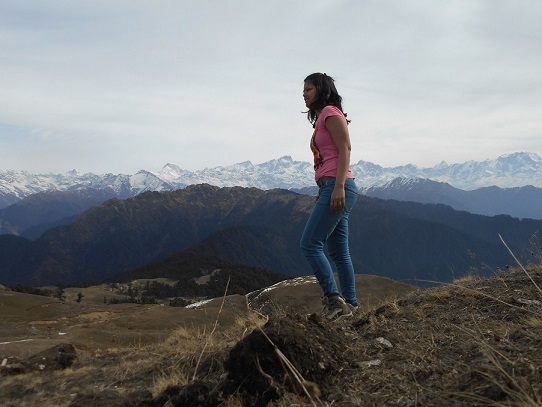 I would like to summarize this trek in three words: learning, delicious food and disciplined movement. Have trekked many times before but never learnt to pitch a tent. This time I learned it and practically did it many times on my own. I got chance to learn several other survival skills under heavy snow fall, different ways to tie a knot, using an ice axe and many more. It certainly gave me a sense of achievement.

And yeah I almost forgot. As the trek was planned during holi, we played with snow on the summit. I was the victim though. Most hit by large snowballs. Poor me!!! :( 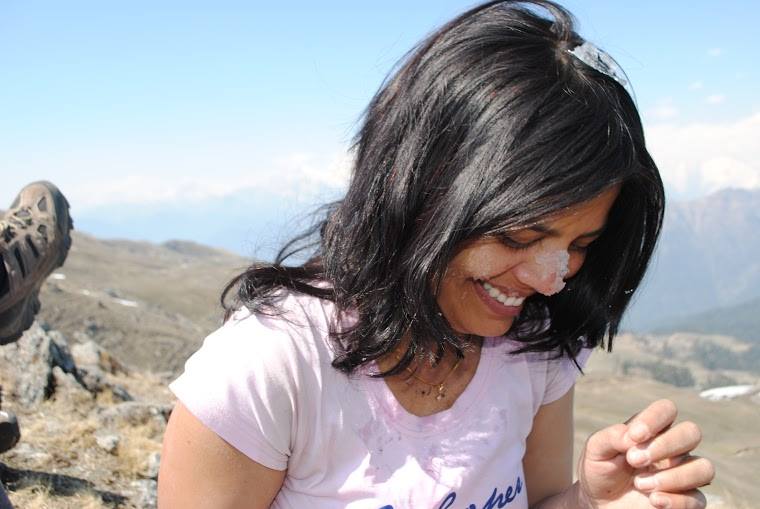 My life is mostly about two things – traveling and sleeping. So when I am involved in any other activity such as talking, eating and reading – "I am traveling in my head". In other words, I am always close to nature. If not physically then metaphysically. 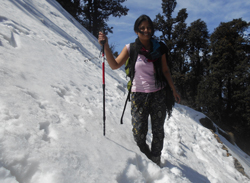 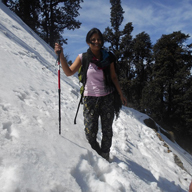 My life is mostly about two things – traveling and sleeping. So when I am involved in any other acti Read more