Making a start & Exploring my self : story of a first time trekker

New Year 2014 – the most memorable in 25 years. I wasn’t at the best pub clubbing; I wasn’t decked up all pretty; I wasn’t on my 10th bottle of beer – The lampposts sped by, the houses left behind, the moonlight showed the way, as the bus journeyed back from Doon – back from the trek of Har-ki-Dun.

If you ask me whether I’m an adventurous person? I’d say no! Whether the thought of skydiving, bungee jumping and the works gives me a kick? Let’s be honest, as brave as I may want to sound – that isn’t me. So when this trek came along – I can’t say I jumped to the idea. But before I go on - there’s one more thing that you must know about me – I can be extremely stubborn, to an extent of irritation (my friends can vouch for this)! When I decide to do or even not to do something, I stick by it. So this December ‘13, I decided that I wanted to do something different – to spend my new year in a way that I would always remember. And that’s what led me to Har-Ki-Dun! 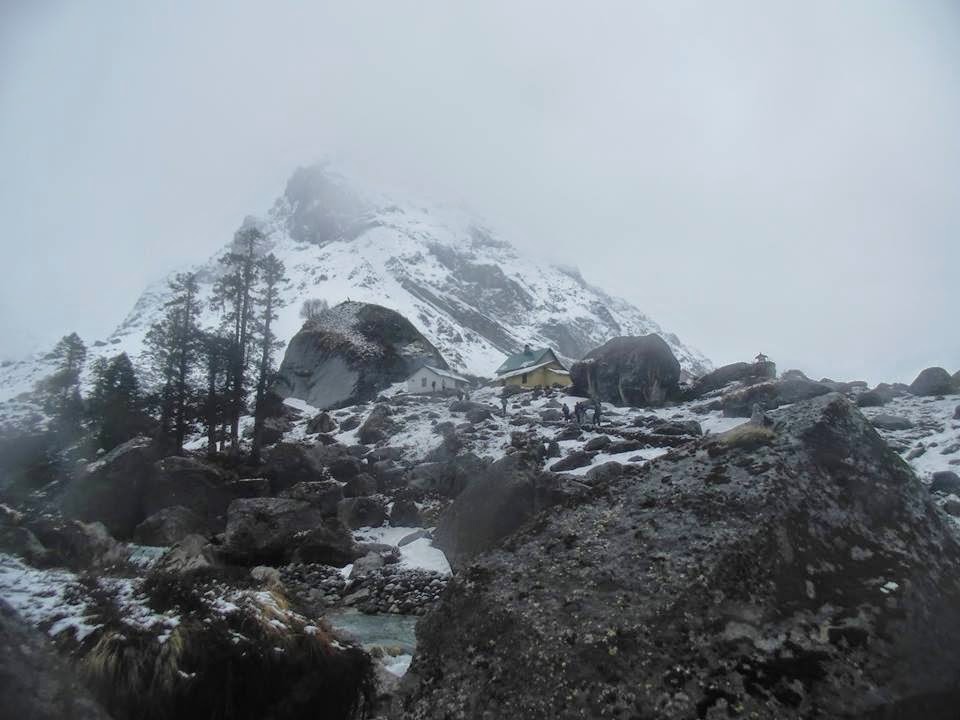 This writing is not about the trail or about the route or the places we stopped. If you’re reading this because you want to know how to go for this trek, you should stop. I’m terrible at names and if you’re expecting a day by day account of the trip then I’m even worse. I didn’t remember the names of the places even while I was a part of it!

The purpose of this is just to share an experience, to reflect on what I felt - a feeling like never before.

Even as I sat on the bus with the group(some familiar faces, some not), there were somethings which kept nagging in my mind. I was excited but at the same time apprehensive. This was my first time and it wasn’t as though I was regular at the gym or anything. The only exercise that I had had regularly was probably the walk to the auto-stand in the morning (which is by the way, less than 2 minutes!). I wondered if I would manage to complete the trek. But then again, some great believers had told me that there was no doubt that I’d complete the trek. Possibly – I thought to myself. With these thoughts I fell asleep.

Morning greeted us – early, if I remember correctly. The chill was in the air and the warm tea was almost life-saving. Even as I shivered in the cold, I was told that this was nothing compared to the temperature we would get at Har-ki-Dun. With an encouraging smile I was given my second cup of hot tea. 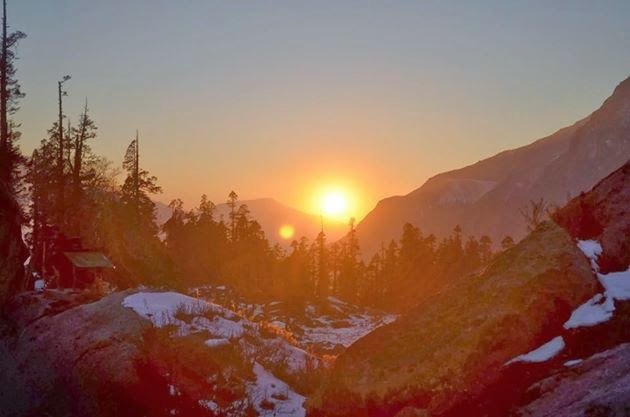 When we started trekking from a place little off from Sankri, we were given instructions to keep in mind during the trek- Follow the guide, stop when you are unsure, look at the arrows for direction. As the last set of instructions were given, we all took deep breaths as we told ourselves – Finally it’s time - Let’s do it!

Day 1 – Apprehension. 13 km. Walking on the slippery ice. One or two time my feet slipped. The guide held my hand close- saving grace. I walked on for hours, often could see no one in front. I looked back to see if I was on the right track. Still no one. I wasn’t scared of getting lost. I was actually scared that I would be out of breath, I was asthmatic and I was scared that I would have to give up. Strange how people you hardly know, can make you feel better – even when they don’t know what’s on your mind. We didn’t talk much, but it was comfort simply walking with someone at these times. And sure enough, someone would always appear – like a sign to keep the faith. 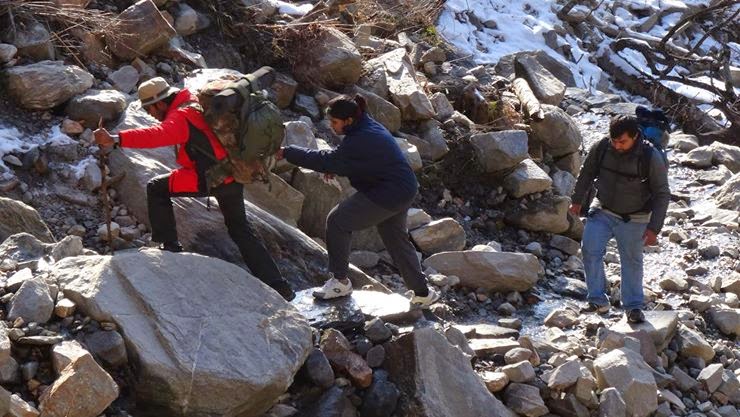 When we finished lunch, we were told that it was only half way that we had completed. We almost wished that we hadn’t asked. As I walked along, now completing 5 hours, I kept telling myself – just a little more. Occasionally, I looked around at the stream, the mountains, the trees – but a little voice inside me kept saying- “for now just keep walking”.

At 5 or 6 (I think) when we finally reached Seema, the feeling was unparalleled. When I could finally see the tiny cottages where we were staying, and the distant figure of one my fellow trekkers walking up to the gate of our destination, it felt like victory. It was almost like we had won the war. 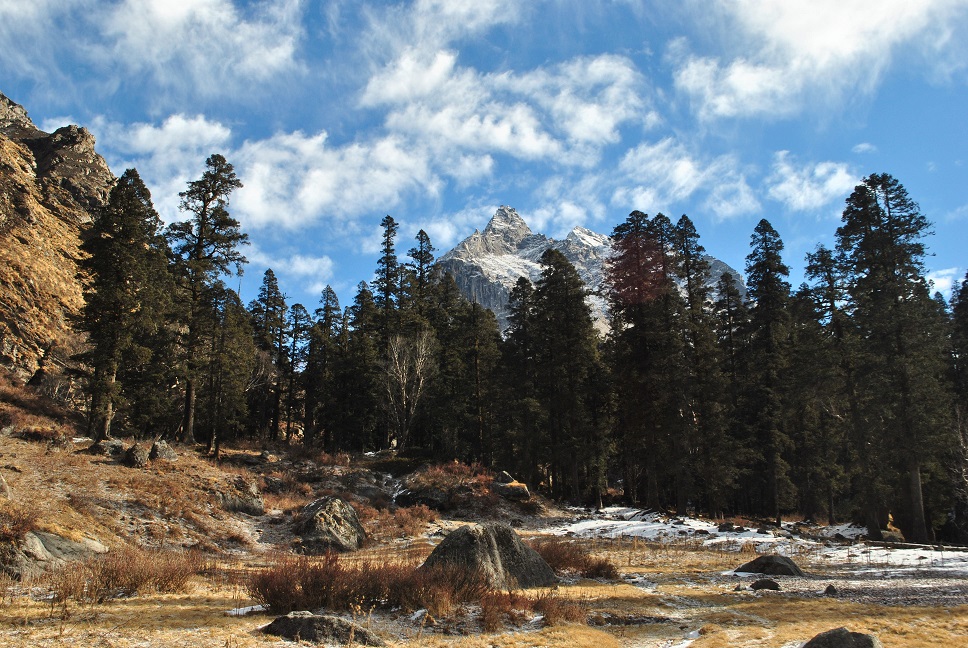 The warmth of the fire, amidst the smoke and the icy wind felt like nature was on our side. Amidst the tall mountains and the snowy roads – after the walk that had seemed endless-food had never tasted so good. Across the fire, people joked and laughed and narrated their tales of the day, each one satisfied and proud of what they had achieved. I simply watched them as I absorbed the surroundings – the calm, the peace and the melody of the mountains. Didn’t say a word. Didn’t need to. Satisfaction. There was peace. I was happy. I just smiled at this group sitting snug, trying to catch the warmth. Till a day before, we didn’t know each other. Even now we probably don’t, yet there was comfort.

Day 2 – Confidence. There was nothing that could stop me. I walked ahead at my own pace – a rhythm that played again and again in my head. I didn’t wait for anyone. I didn’t look back to see if I could get company. Today was a day for self. Beauty – they say lies in the mountains, in nature. And they are right. I’ve travelled extensively(that’s what I’d like to believe) to hills and mountains and scenic ones that too. Never have I ever experienced them the way I did that day. When you stop and look, you can see valleys and mountains, sometimes green and sometimes snow, you feel the expanse, you feel the vastness of it all. You see the picture and want to capture it because there’s something original, honest and genuine in the picture – it’s not photoshopped, its not commercial – its not made for tourist to come and see, it is the purest form of nature. Not one of those days did I want to take out my camera and capture the image – because I knew I wouldn’t be able to do justice to the beauty of it all. 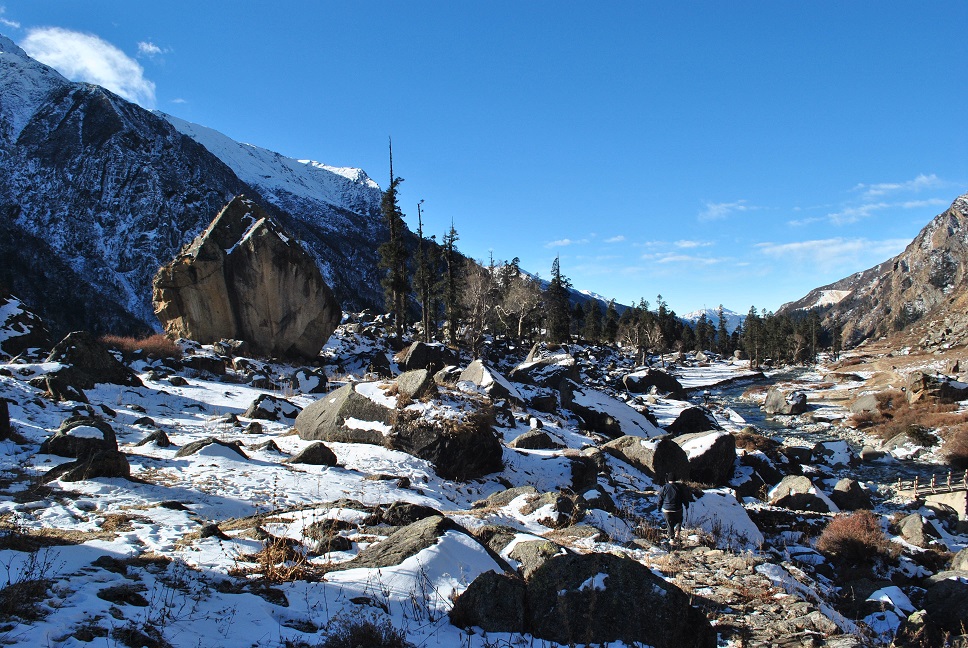 The little hut at the distance – keeps you at it – telling you that you’re almost there - Har-ki-Dun- what a journey- to remember!

For me this trip was a validation of the belief that if you think you can – then you will. And every member of this group, whether I spoke to or not, made a difference. The solidarity created unknowingly, the feeling of having one goal- the comfort of someone waiting round the corner with a bottle of water(often empty), the happiness of waiting round the corner for some one with a bottle of water telling them that we’re almost there; the feeling of satisfaction at achievement of something inspite of the obstacles created in your mind, by your mind, the breathtaking picture that becomes more beautiful with every step that you take, compelling you to take one more step towards your destination.

Har-ki-Dun for me was a victory for self. I look forward to many such more... 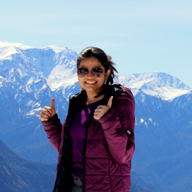 Commonly referred to as shy, Shayoni is not exactly so! Adventure fascinates her and she often dream Read more