This is the penultimate section of the whole journey. It actually is like a semi-final of any match. The two passes that you cross, lachu Lung La & Nakee La, are to be crossed in a single day. This is definitely like a qualifier, especially when preceded by Gata Loops on the same day. The section ends at Tso Kar which is a beautiful lake, smaller than Pangong Tso but also much less commercialized. Take a look at your reflection in the lake and forgiveness arrives!

Today was the day of days for this expedition, target was Pang (55 Kms) and unlike most days, there were more than one milestones for the day – Gata Loops@4190 mts(21 curves), Nakee La@5050 mts, Lachu Lung La@5150 mts. Hence riders started early for the day. 1st climb in the morning is usually easy to maneuver and as expected all riders were at the top of Gata Loopswithin 2 hours. Beauty of Gata Loops is that most loops can be seen from the top and it makes one feel very proud & happy to look down the top. 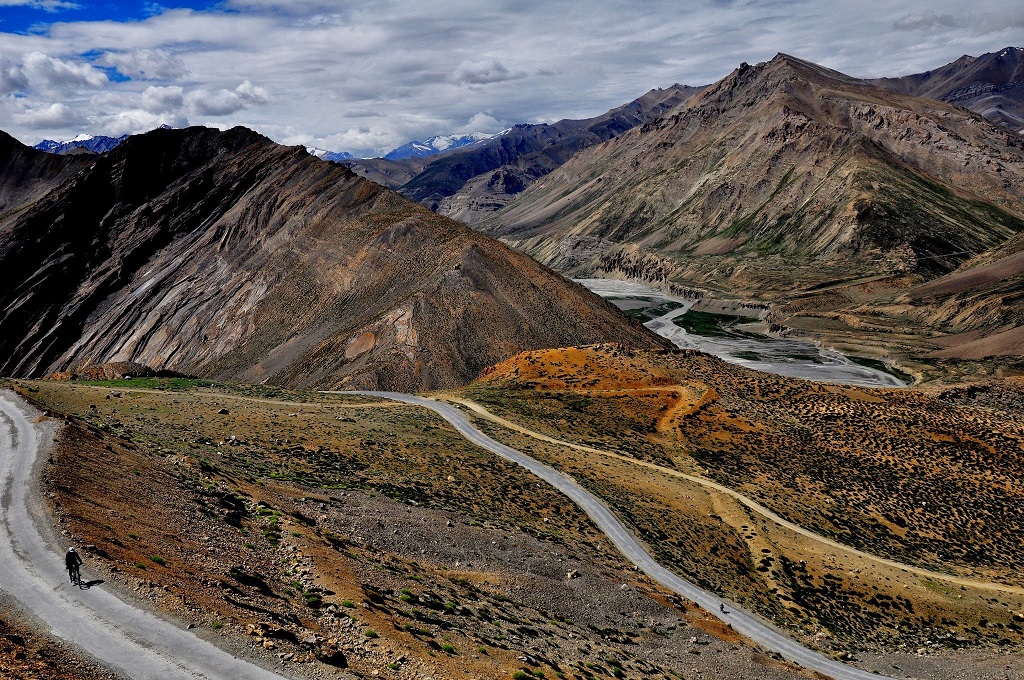 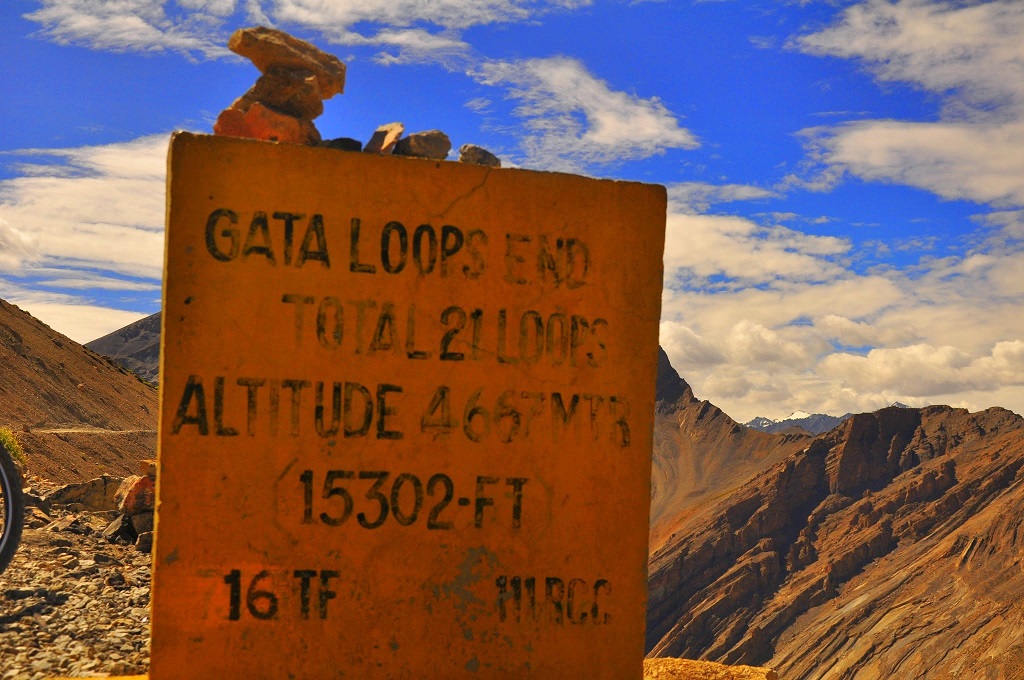 However, the joy could not be too long because next target Nakee La was to be completed with more of continuous ascent. Of all the passes on the way, perceptively, Nakee La makes you earn itself the most. You can see one bend in front and ride with full heart to reach there, only to see another bend up there again., as if trying to protect the pass from being visible. When we finally saw Nakee La from a bend that revealed and the feeling can’t be described. As usual, the pass was celebrated with pictures, laughs, cheers, and we moved downwards to Whiskey Nallah for lunch. 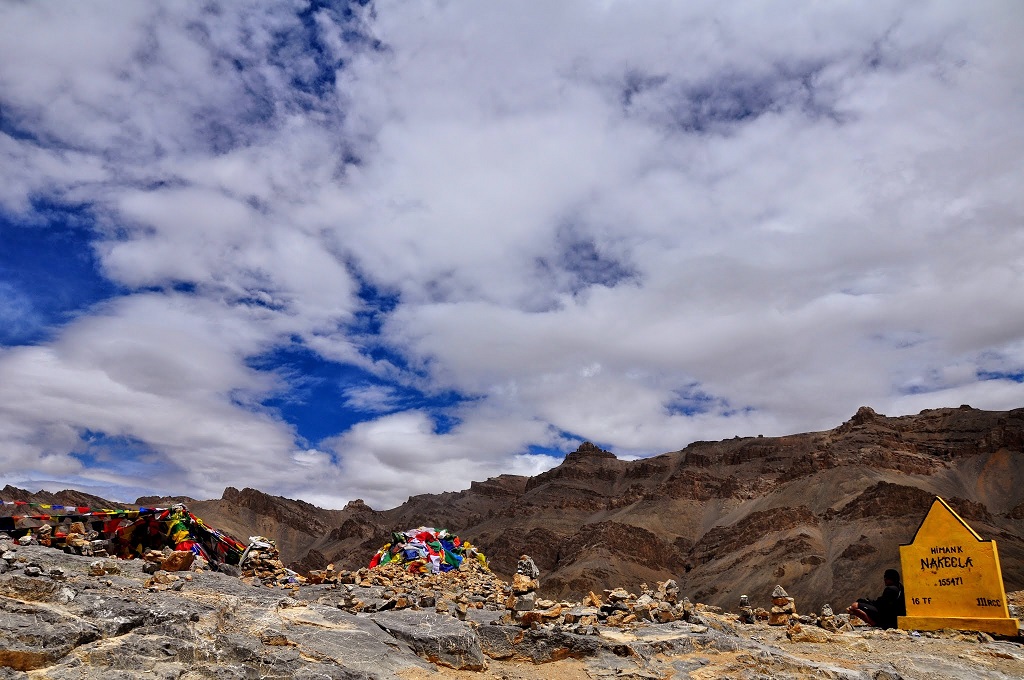 At Whiskey Nallah, you would meet ‘Mr. Rajnikanth’. He recognized me when I met him. Its always a such a happy moment to see a man with fewer hands and a larger heart! This man stays at Whiskey Nallah (situated between 2 passes – Nakee La and Lachu Lung La ) for the longest period during the year, helping everyone that passes by. Today also, he was quick to mention that the weather might worsen, so we should either move fast or plan to stay here itself. People should come here just to meet men of real honour like him… inspirational he is! I don’t know his name but would always call him Rajnikant uncle. 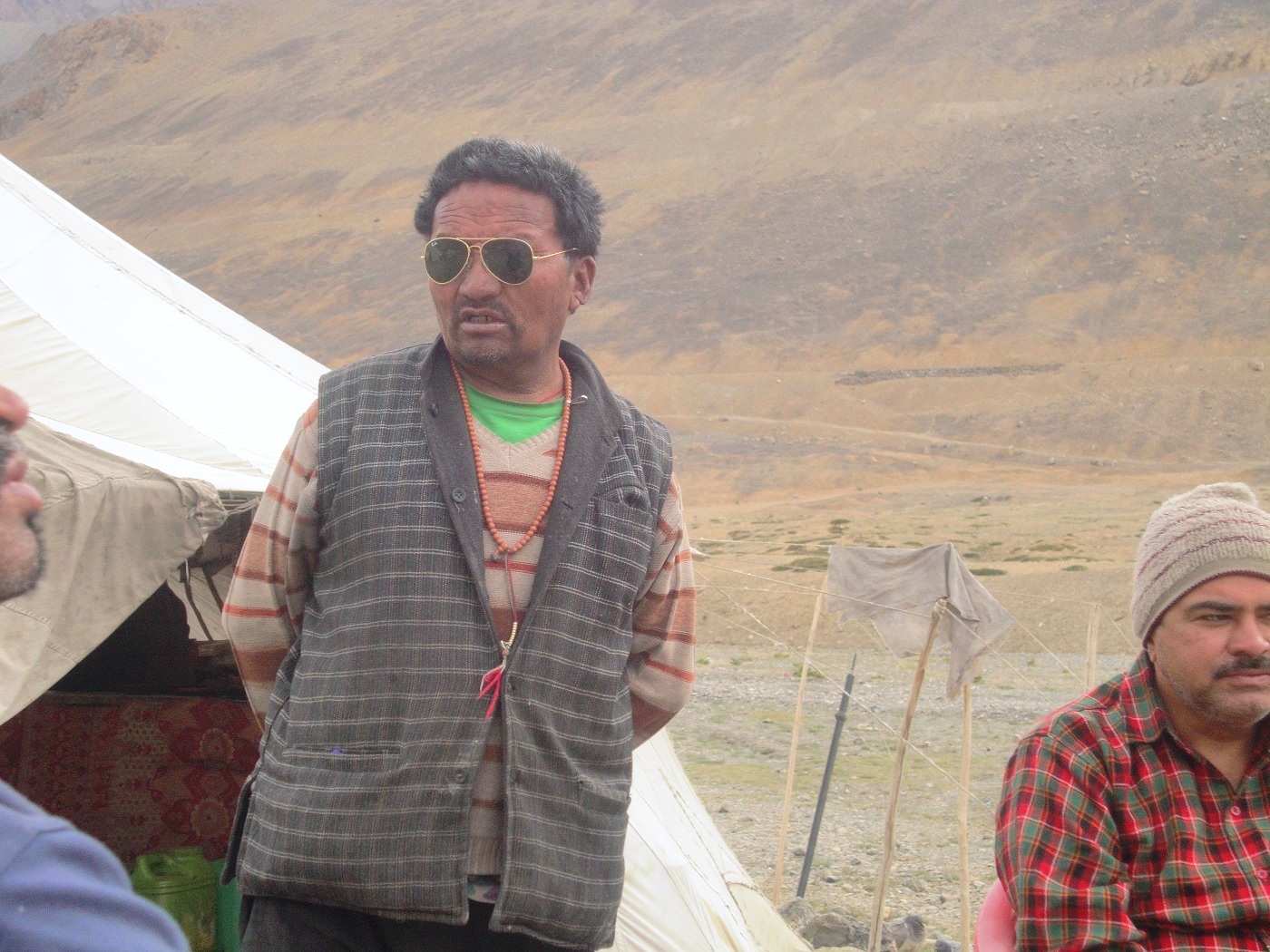 We moved on to cross the Lachu Lung la. While the pass has a nice ascent with not so steep gradient but it’s never easy to ride up in the second half of the day with a drizzle on.. everyone marched ahead. We packed the cameras in plastic bags / covers to protect them from the increasing drizzle and kept riding up. I told everyone that riding up is the best strategy to manage the chill & drizzle. By the time we crossed half way, some of us were extremely tired. Rohit, Kush, Ramu , Yasho, all were pushing their limits while Sreeram was ahead and reached the top first (as usual actually). When we saw those blue, red, yellow, Budhist flags, it was a declaration of the ‘Lachu Lung La’. Sense of achievement is defined by such moments! 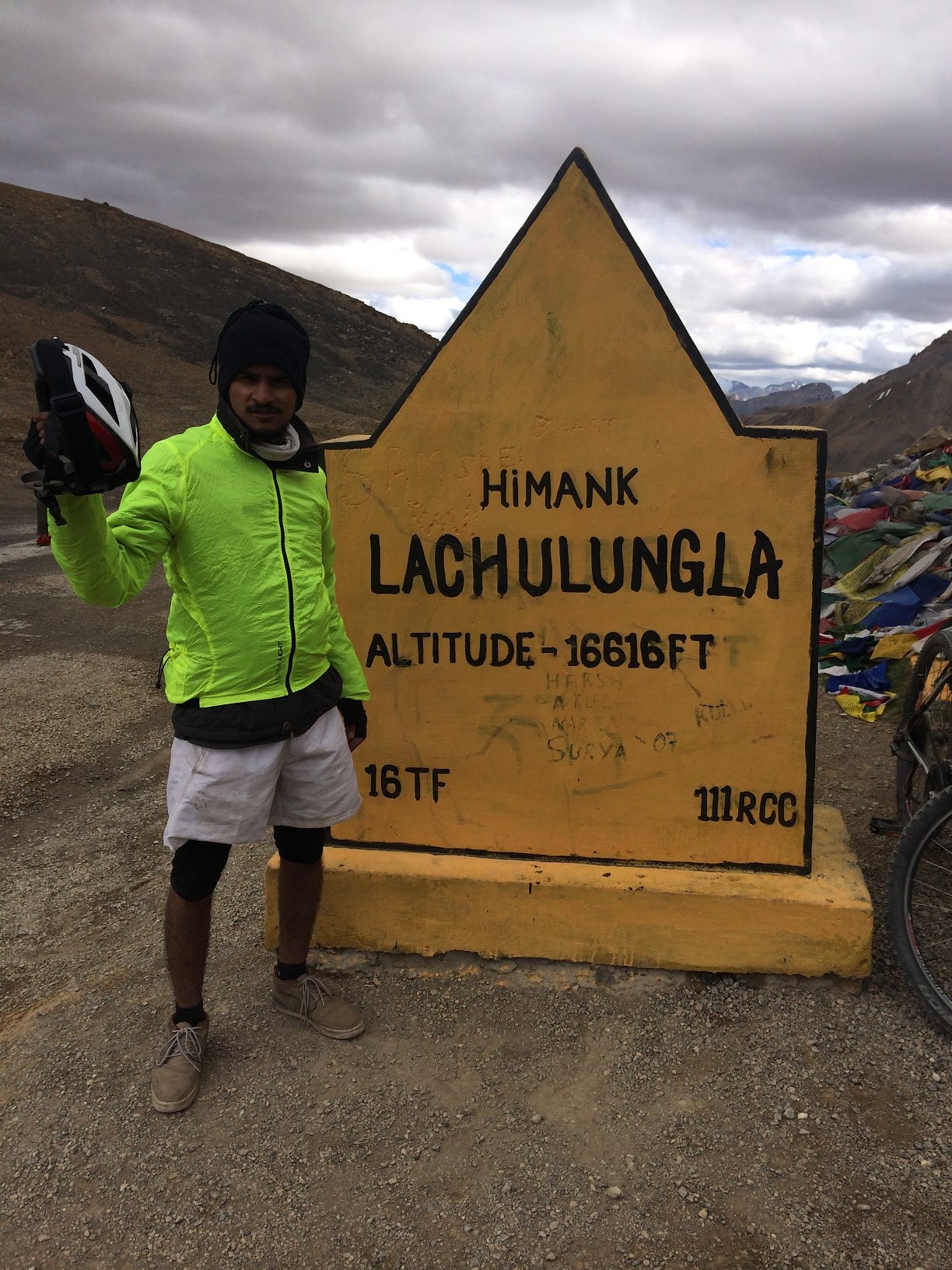 Today, the riders had achieved something after crossing hurdles, facing challenges, and above all pushing their own limits. I am sure from now on; these guys would not find anything impossible in their lives! 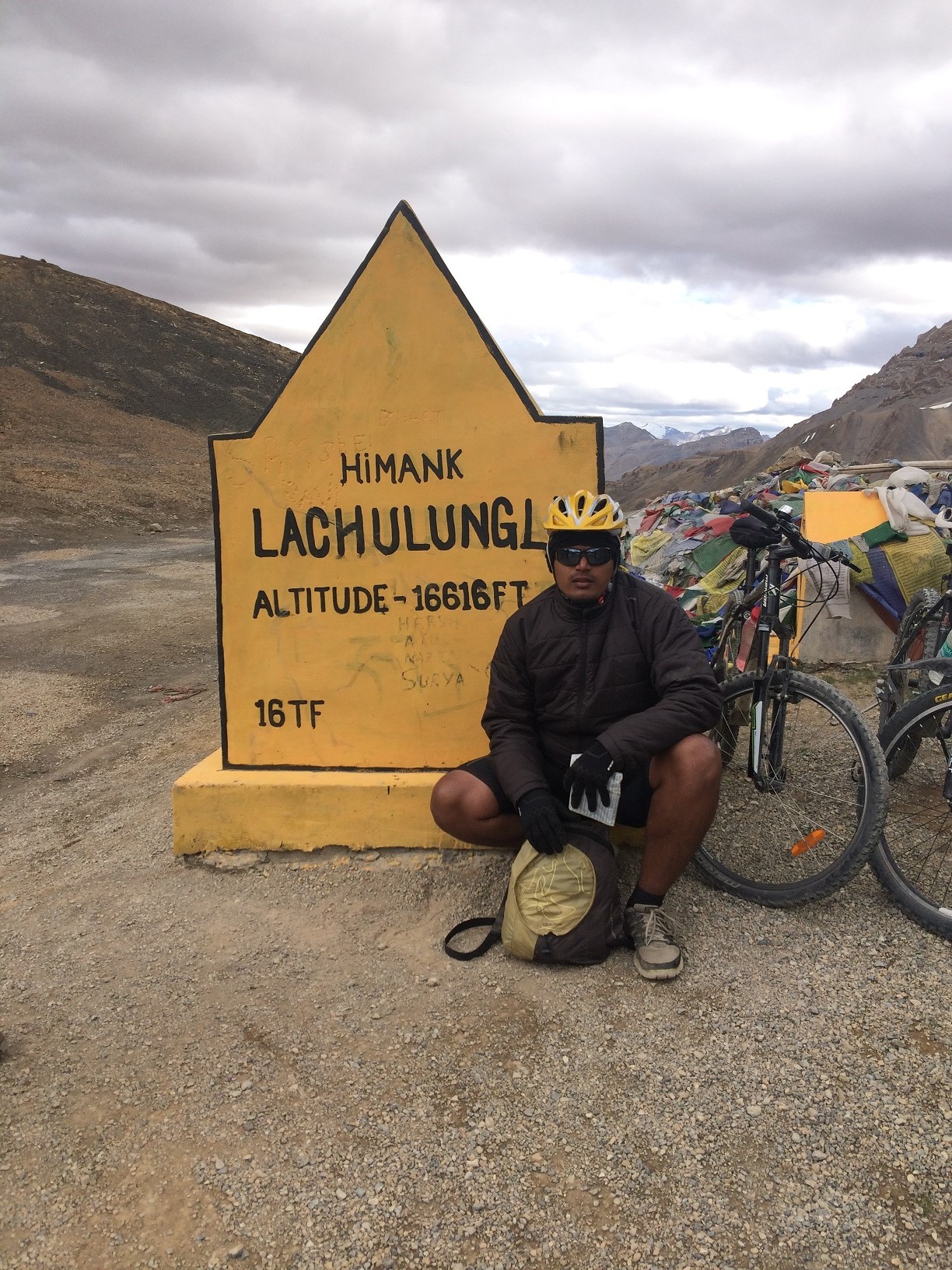 Descent from here to Pang@4600 mts is a beautiful ride taking you between large mountains, reddish soil, and a nice water stream alongside. We (me, Yasho, and Ramu) saw a group of local deer which was looking awesome. Unfortunately we could not capture them but none the less the sight would remain with us forever. Some 9 Kms before Pang, we had the first flat tyre of the trip. We were careful and maintained our bikes well every morning with proper air pressure check but how can you have a Leh trip without one or two flat tyres 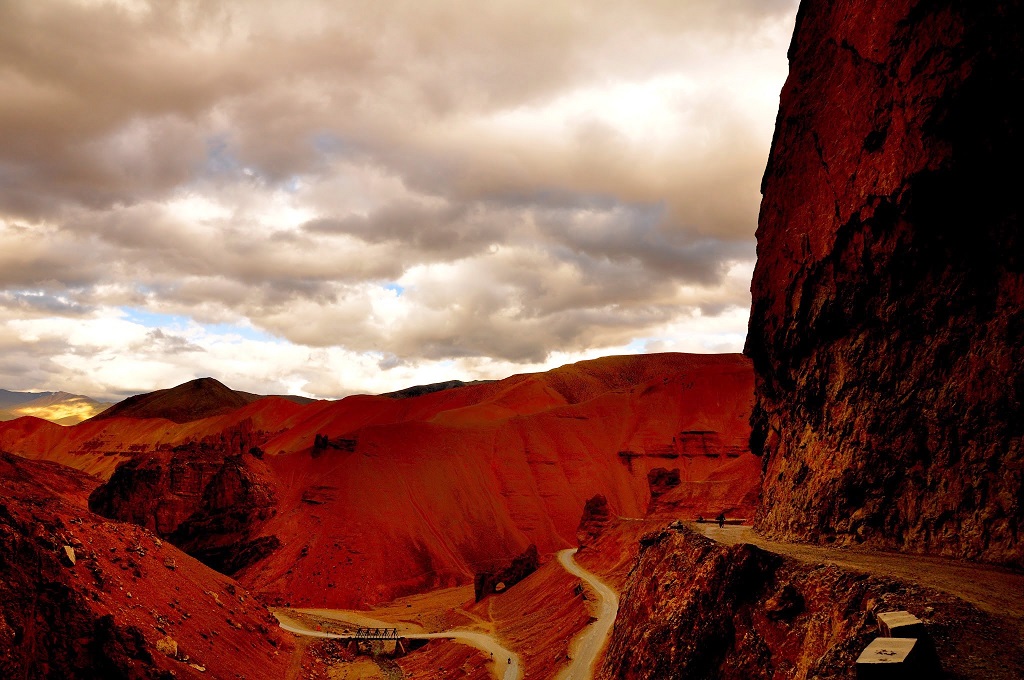 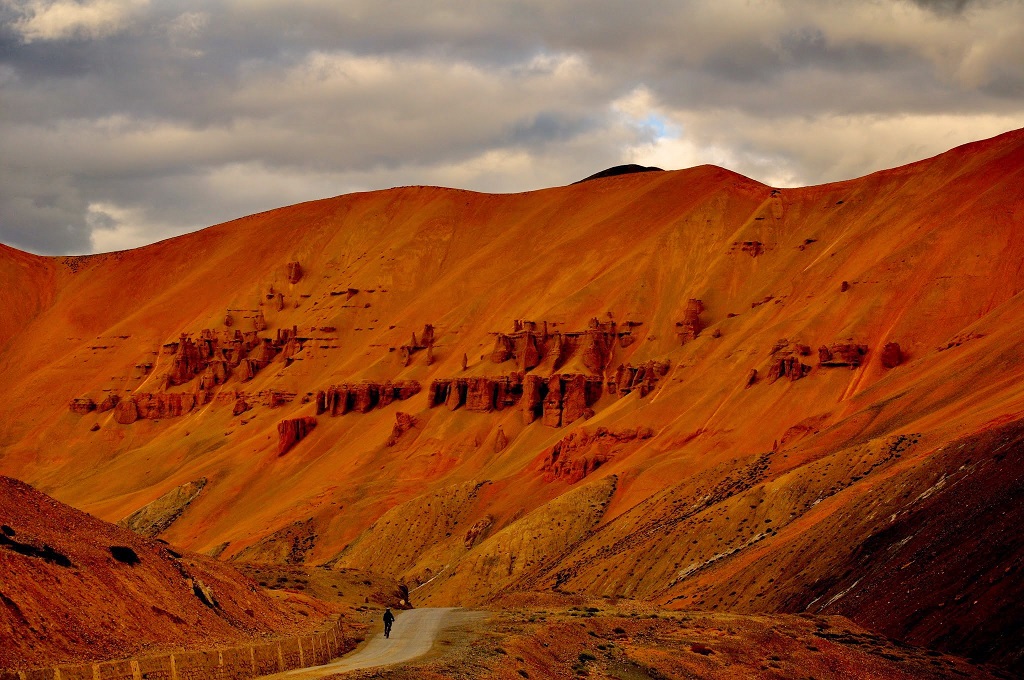 Today was a lazy morning. All of us knew that the day was easy till Tso – Kar. Climb from Pang till Moorey Plains@4700 mts is a short one. As soon as you enter the plains, it’s a completely different world altogether. It’s a sudden transition to a flat road with a vast cold desert on both sides of the road. One can’t imagine such vast deserts can exist here among the high peaks all around. A little tinge of green here and there, was like a mirage of an Oasis but there was absolutely no water here. Just the feeling of breathing in that open air is unforgettable.. 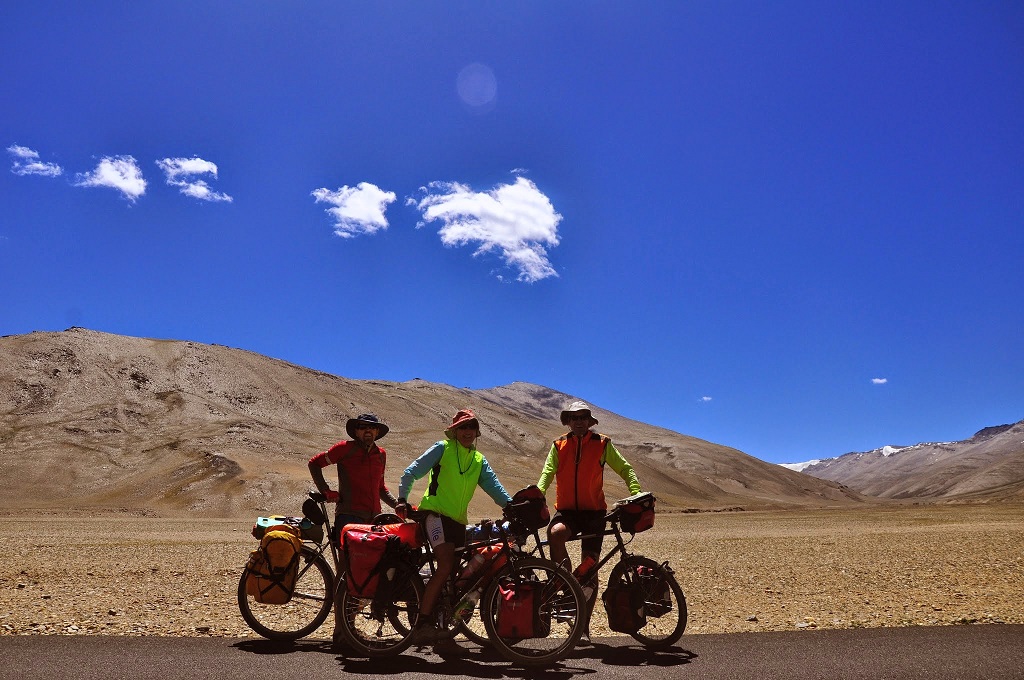 We took a right turn for Tso-Kar, before Debring and did an off-road for a good 7-8 Kms to reach the lake. The lake is not as huge as Pangong but the view is breathtaking! Multi colored ( Green / Blue / Yellowish) water, barren peaks all around, circular visibility, the lake was definitely Picturesque. Sreeram and others clicked many pics there.White pungent smelling powder was lying all around. It appeared as if the salt around the lake had sulphur deposits. We reached back to the point where we had camped ( around 3-4 Kms) by around 15:30 hours. 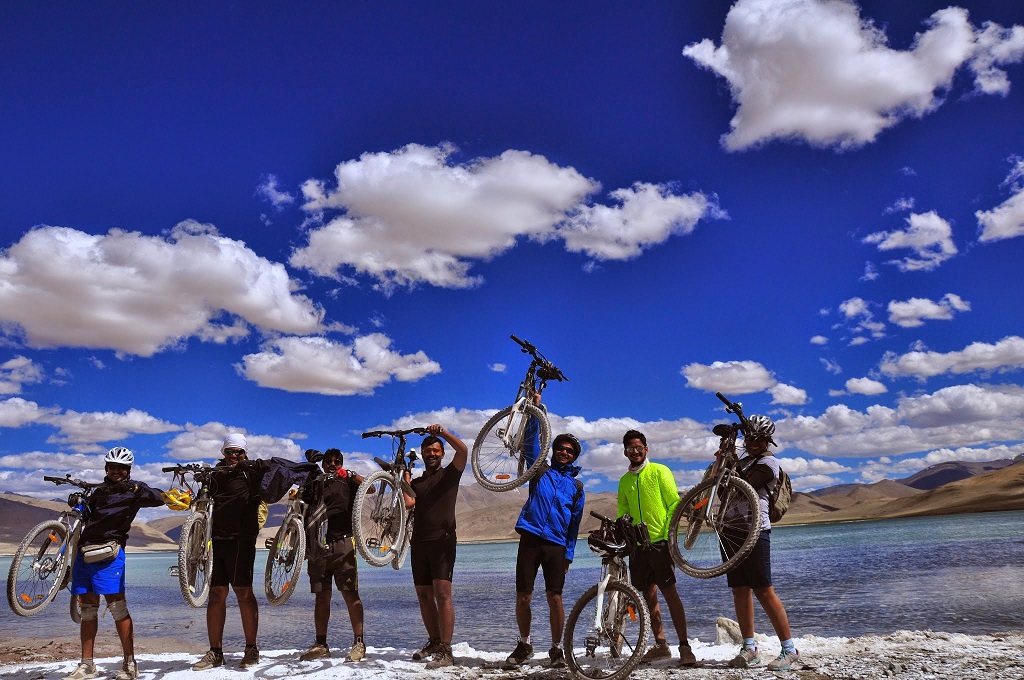 Everyone was busy soaking the beauty, some of us were writing, some walking down, some clicking pics… quite and satisfying … it seemed for all of us. The wind here is strongest that we had faced till now. We all had early dinner and went to sleep for the next day was a big one. I kept looking at the top of the tent fearing for it to fall due to the wind but the jumbo tent stood stable. 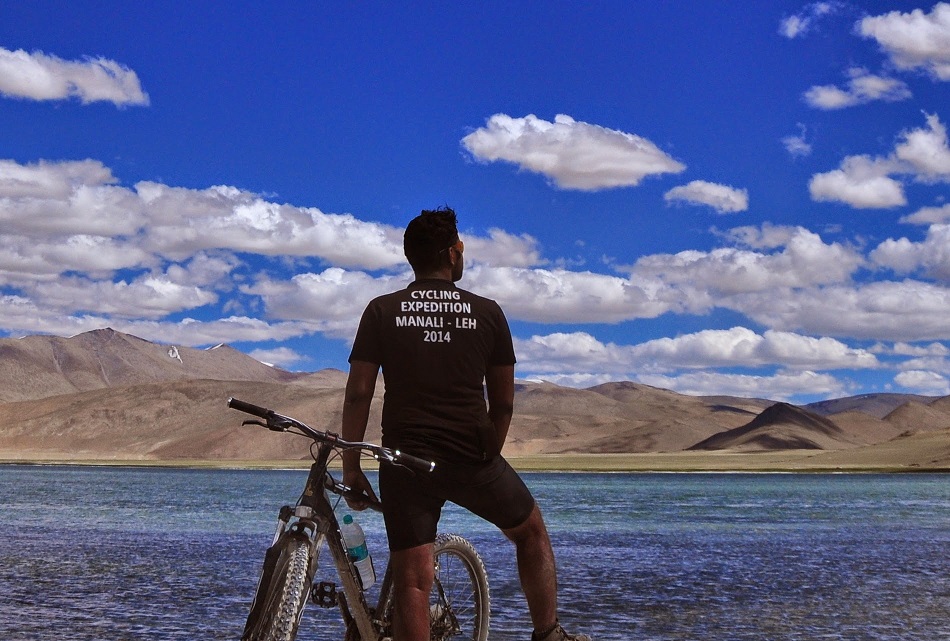 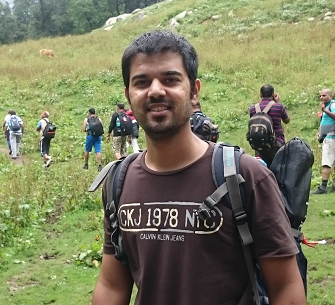