The parikrama of Drilbu Ri

Scouting for a good day hike for my last day in Lahaul Valley, I learnt about the kora (parikrama) of Drilbu Ri. Drilbu Ri (the name translates as 'Bell Mountain') towers over Keylong and forms a barrier between the Bhaga and Chandra valleys. Keylong itself is spread out along the banks of the Bhaga at a height of about 3000 m while the pinnacles of Drilbu Ri would probably be close to 5000m. 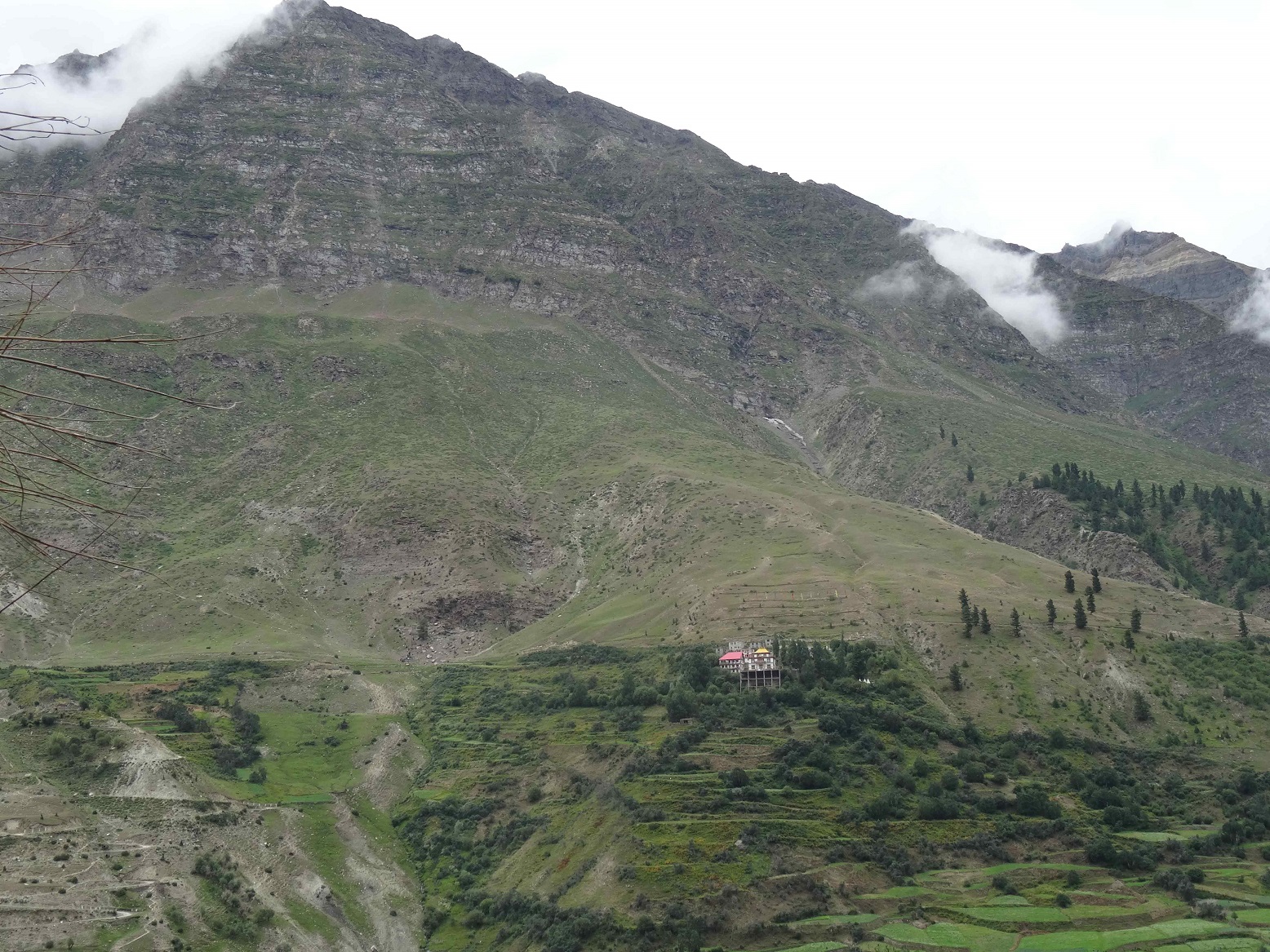 The parikrama route starts from Keylong and descends to the Chandra Valley after crossing the Drilbu Ri over a high pass. It then proceeds downstream along the Chandra to Tandi where the Chandra and Bhaga merge to become the Chandrabhaga, also known later as the Chenab. The last leg is the return to Keylong from Tandi following the Bhaga upstream.

Lahoulis complete the parikrama in a day after an early start. Feeling adequately acclimatised after a long stay in Lahoul and hearing that it was a well marked trail, I decided to attempt the parikrama without a guide the next day. A hearty breakfast and the wait for a packed lunch ensured that I was off to a leasurely start at 7.30 am. The dhaba owner informed me that locals would be on their way by 5 am.

I followed a path out of town through pretty fields of peas cauliflower and potato. The path sloped down to a bridge across a narrow gorge of the Bhaga. The GPS application on my mobile showed the altitude to be 2900 m. This was where the ascent started. A steep well paved path lead up to Khardung village and the famous Gompa near it. 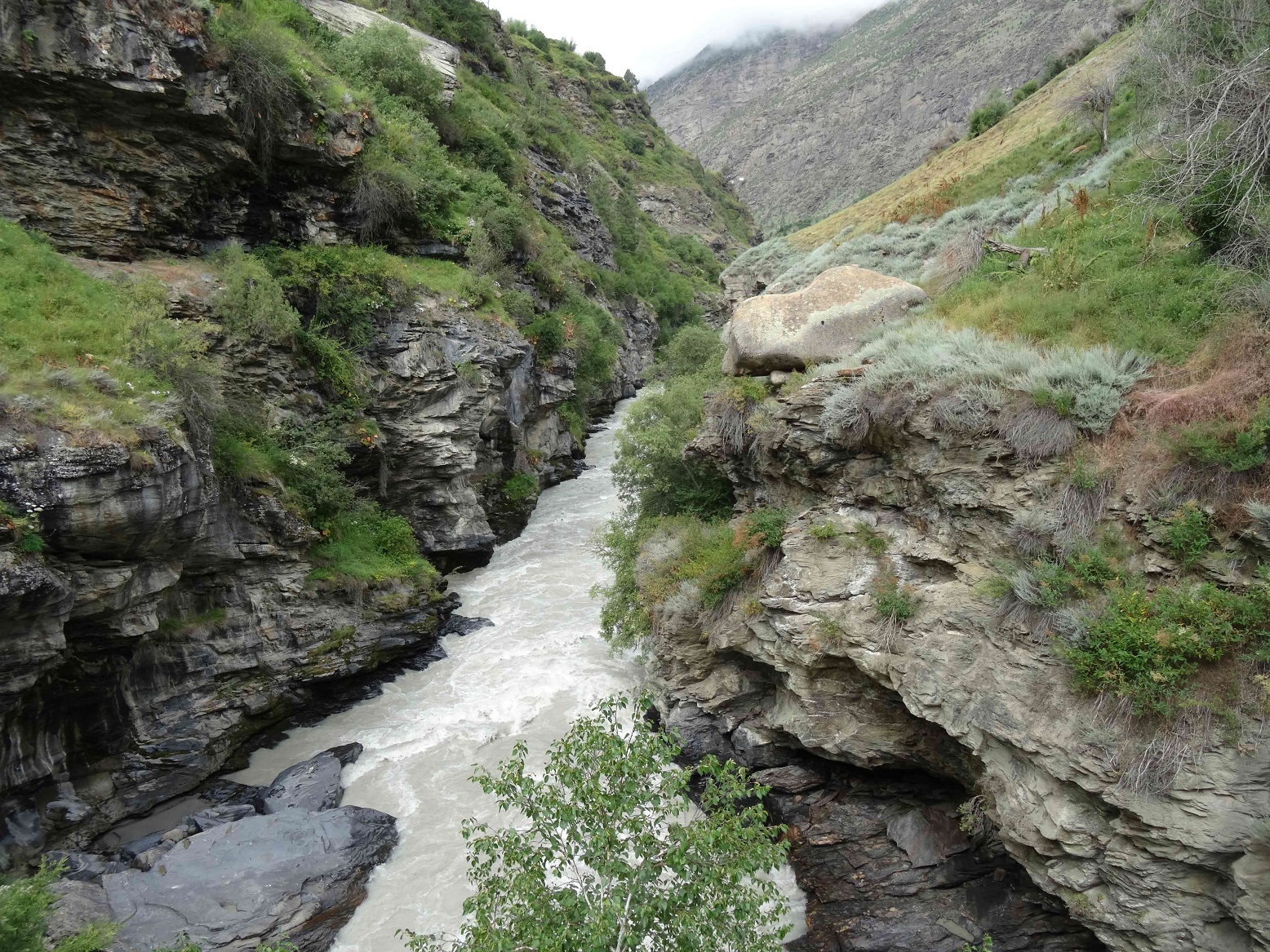 Above the Gompa, there was a spring where I had my fill of water and watched sparrow sized birds - Fire Fronted Serin - flit about near the water. The path up Drilbu Ri started from here. It was well marked with prayer flags at intervals, signs painted on rocks and stone piles - cairns - marking the way. It was 9.30 am when I resumed walking.

It was a lonely walk with no sign of any humans in the vast landscape open to the eye. Far above, on a sheer face of the mountain, a thread of white beads resolved in my camera lens into a flock of sheep. But there was no sign of a shepherd. Wild flowers - Himalayan Fleece - painted the grassy mountain flanks in pink hues. The Bhaga meandered its way from Jispa far below. Clouds and hills played with the sun to produce fluid patterns of light and shadow. 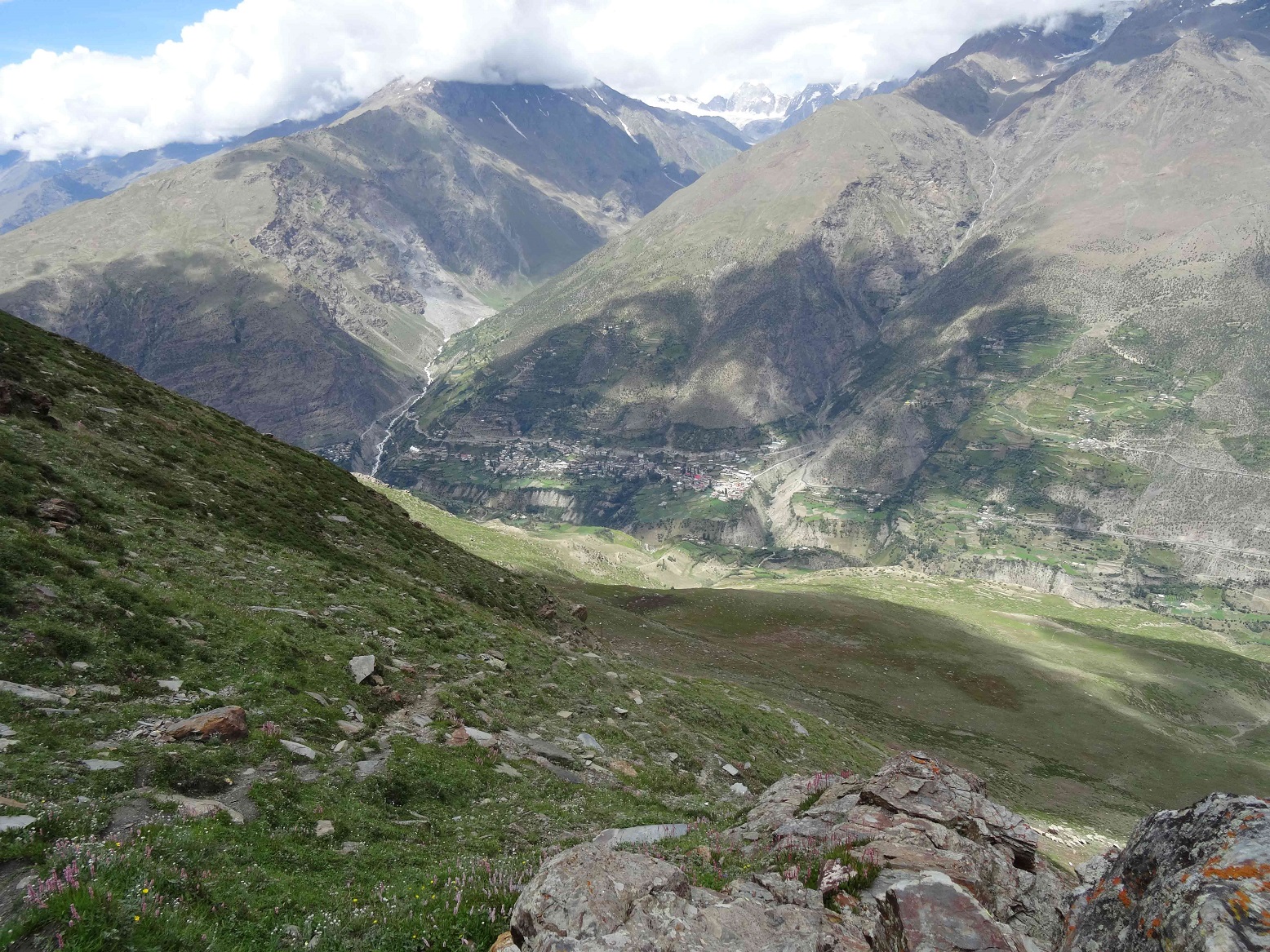 An hour from Khardung Gompa, I was at 3700 m at a clearing with tell tale signs of being used as a resting spot by pilgrims. Half hour later at 3800 m I reached a ledge over a sheer drop. The path had dissapeared and I was lost! I kept my cool and retraced the path I had come upon and finally hit the kora trail. By noon I had reached 4030 m. An old man - the first person I saw after Khardung - walked past me without looking me in the eye. He was wholly engrossed in his prayers. Somewhere around this time I began to get anxious. It was 5 hrs since I started the trek this morning. The trail I had traversed was steep and slippery in patches and I did not fancy returning the same way after dark.

Then I spotted the prayer flags marking the pass. It was 12.30 pm and I was at 4170 m. With renewed energy I pursued the stiff climb to the 4380 m high Rangcha Gali (pass) reaching there just before 1 pm. I had climbed close to 1.5 km vertically from the bridge which I crossed that morning. 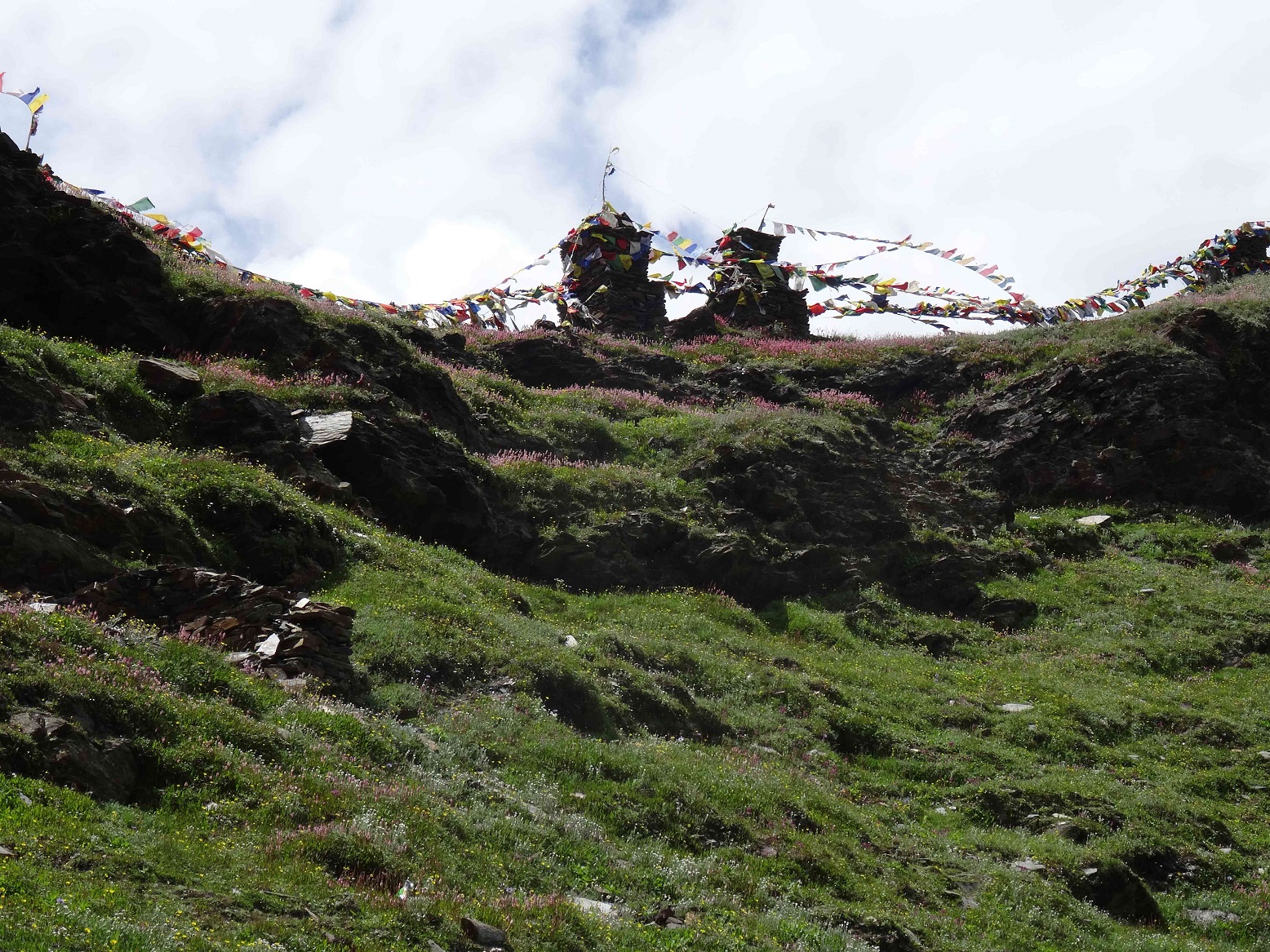 Colorful prayer flags fluttered in the wind and chortens adorned the Rangcha Gali ridge. I sat and feasted my eyes on the grand panorama across the pass. The majestic Pir Panjal range with its giant glaciers descending from the clouds with the Chandra snaking its way below. The 6000 + m peaks of Shikar Beh and Mukar Beh stood directly ahead abruptly falling 3000 m to the banks of the Chandra below. 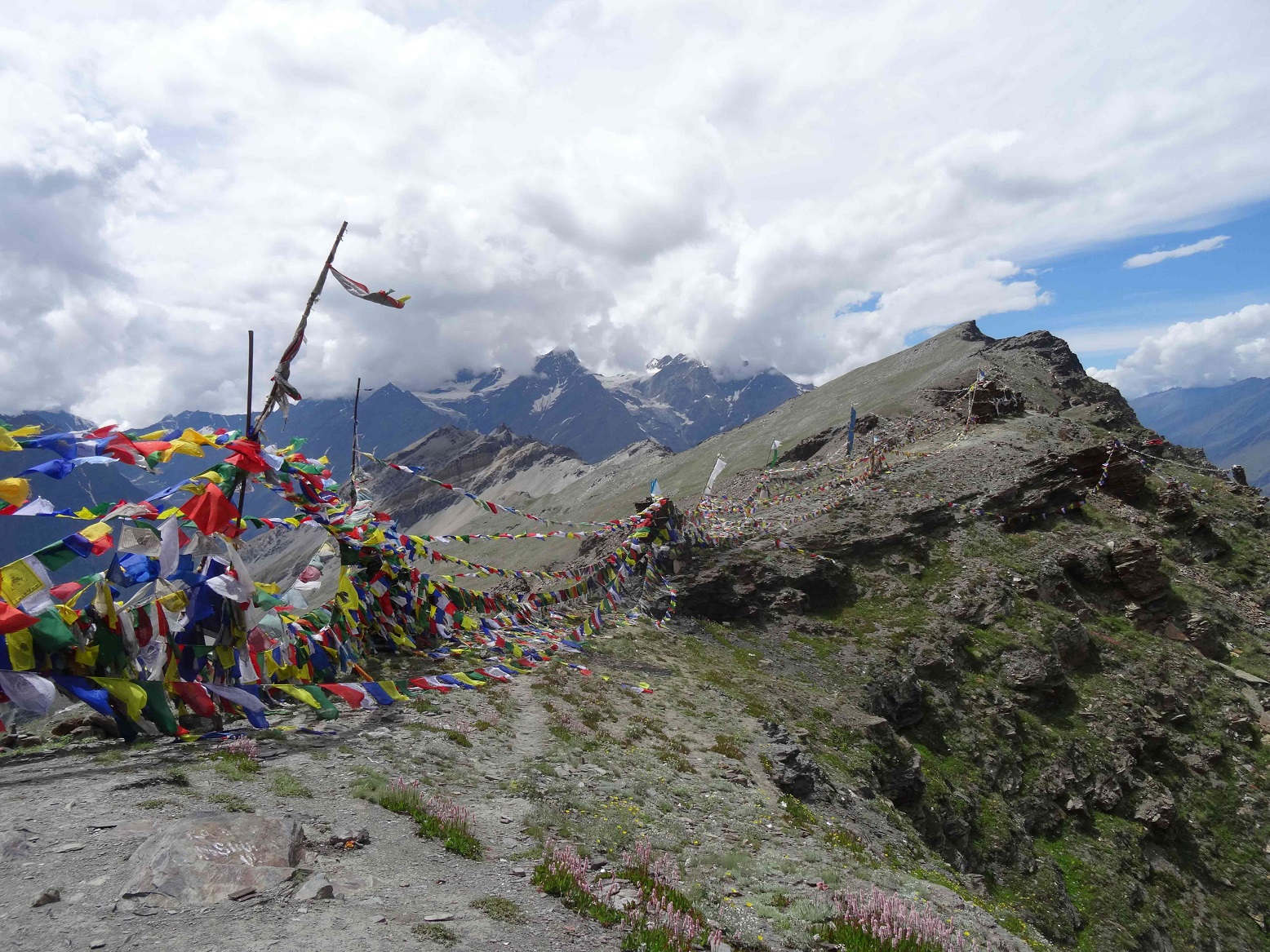 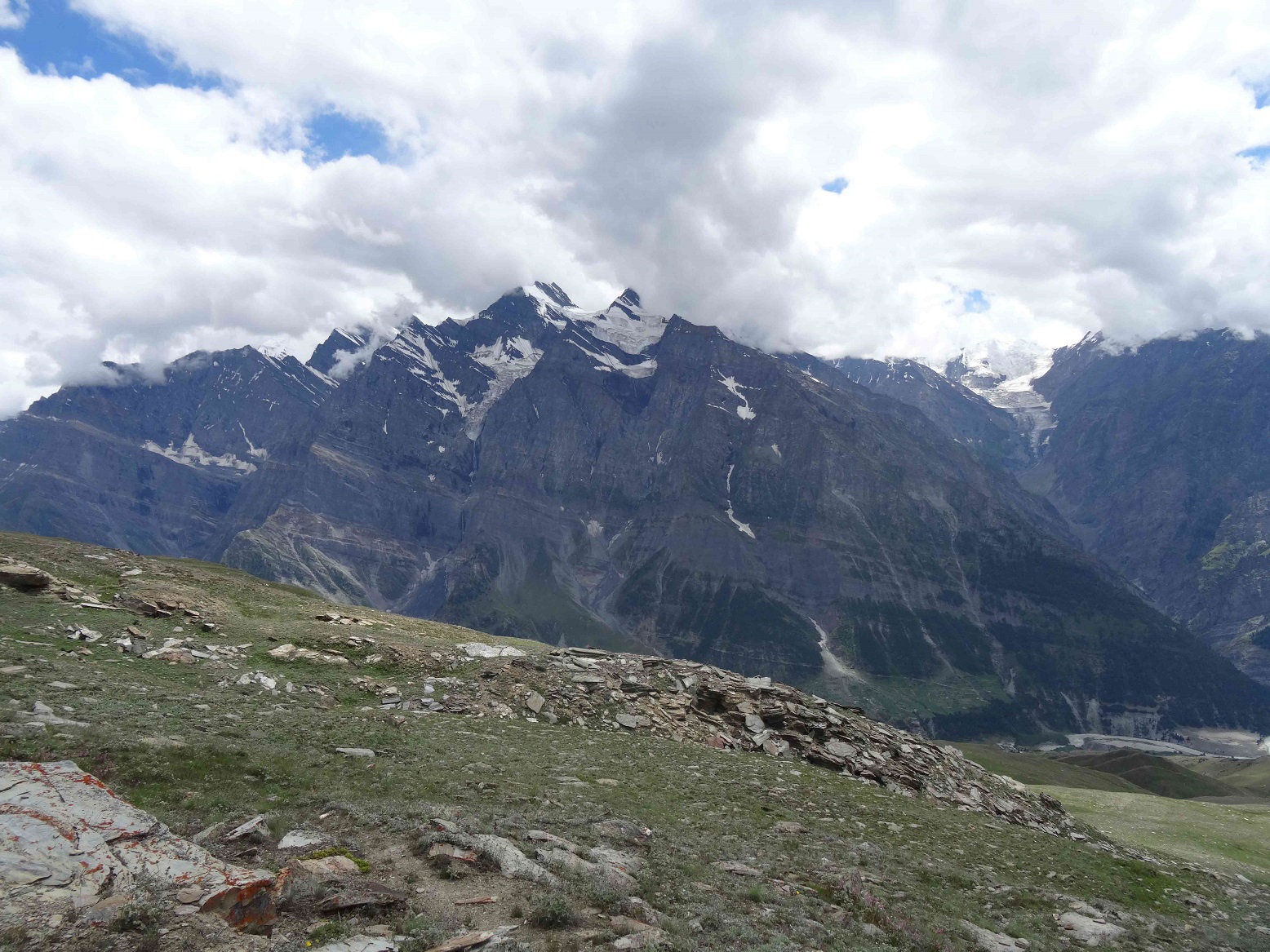 The view on the side of the pass I had just climbed was no less majestic. At the bottom of the valley lay Keylong. The Bhaga appeared as a silver ribbon emerging from a bend in the valley. Imposing hills guarded Keylong to the north and through a gap provided a glimpse of Zanskar, a forbidding land of snow and glaciers.

There was company at Rangcha Gali. A gaddi sat on a rock keeping an eye on his flock somewhere below. He offered me a slice of an apple he was eating with the comment "so you have reached". He must have had his eye on me since morning following my excruciatingly slow ascent. Further up on the ridge, a large group of monks in red robes were winding up their lunch party. They were from the Tibetan School of Medicine in Sarnath, Bihar and were here on a field trip.

The monks started their descent towards the Chandra valley and I decided to follow them as they were with a guide and the day was advancing. The trail sloped gently downwards and was well marked. Soon I could see fields of potato at 3500 m. Half and hour later, I reached the Manali-Leh highway along the Chandra and just a km before the village of Gondla. The descent had taken only 2 hours.

There was no pleasure in walking on the dusty broken highway. After a long wait, I got a lift in an army vehicle to Gondla. A bus ride to Tandi the confluence of the Chandra and Bhaga followed by another to Keylong helped me complete my kora before nightfall. 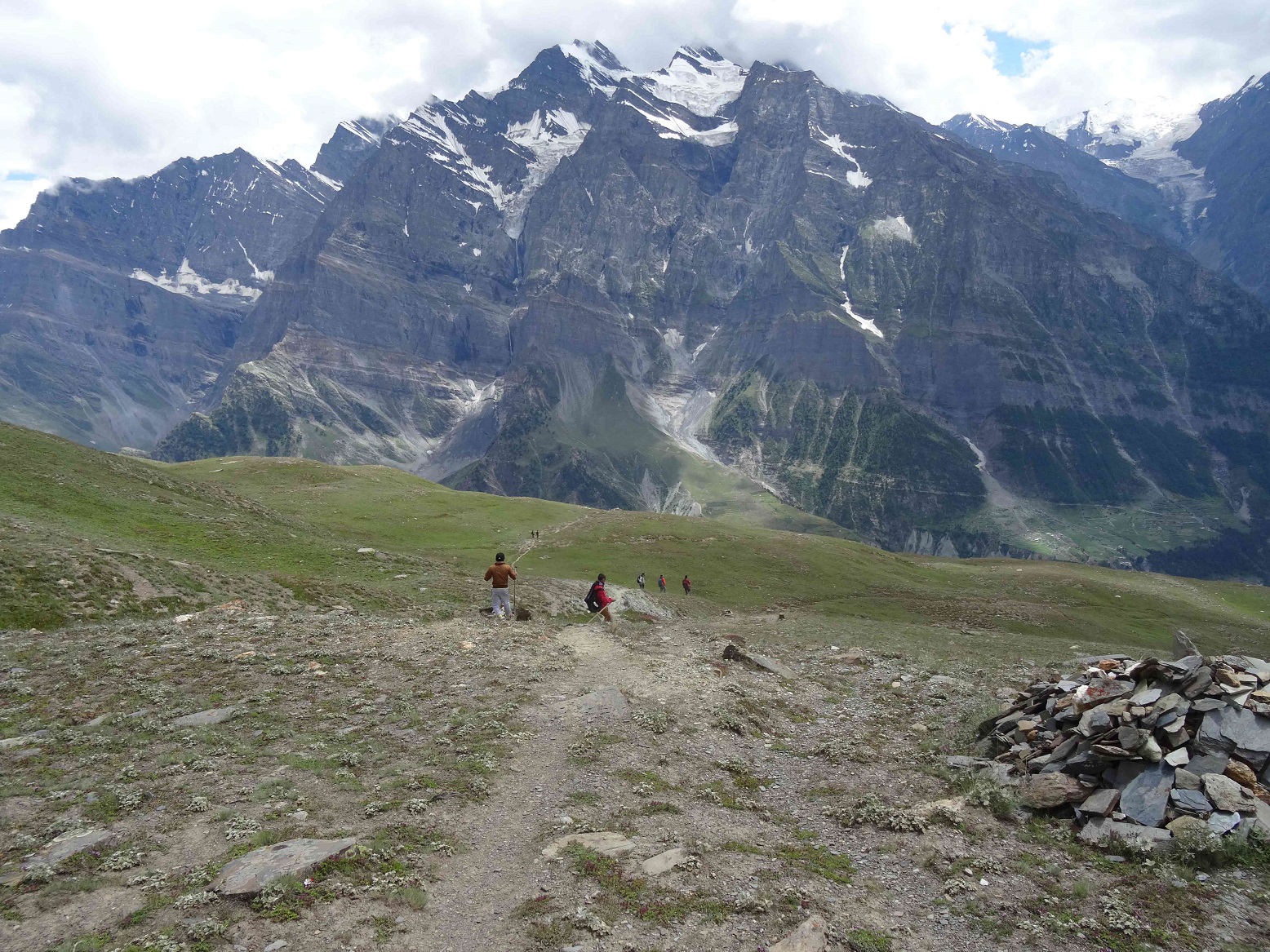 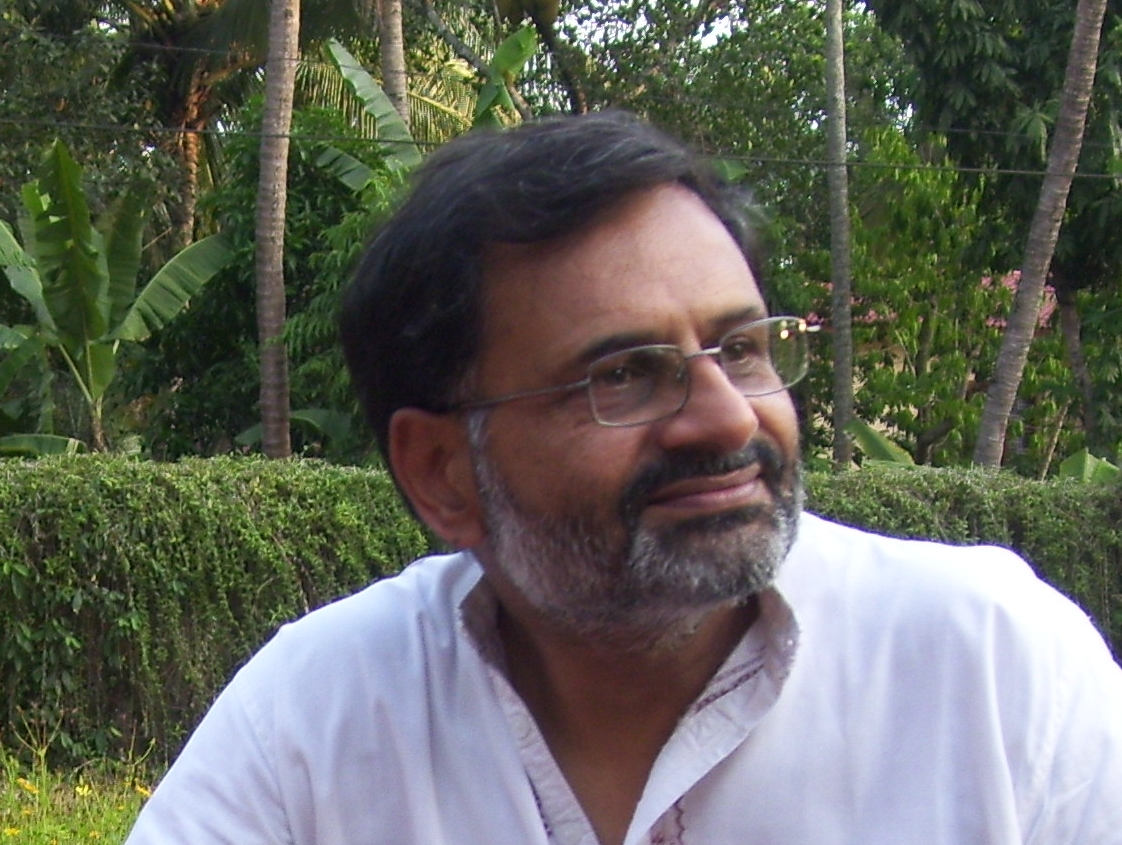