Why I chose to do Tarsar Marsar over Kashmir Great Lakes

Comparing two treks which are equally grand is always confusing.

The treks of Tarsar Marsar and Kashmir Great Lakes (KGL) are no different.

Both being in lovely Kashmir, often tend to clash with each other as to which is the prettiest, thus posing a question of which among the two should I do?

And for many, KGL has always represented the best of Kashmir, but they have no idea about Tarsar Marsar or what it has to offer. The situation was no different for me.

Having heard a lot about KGL and people advising me to choose KGL over Tarsar Marsar got me thinking. If everyone is opting for KGL, then that means the Tarsar Marsar trek must be relatively untouched.

Yet, choosing between two beautiful treks which takes you deep in the magical valleys of Kashmir wasn’t easy, especially when you have seen pictures of these two on the internet. What makes it more difficult is the fact that there can never be a “bad” or an “average” picture of Tarsar Marsar and KGL.

We can start with the best of both treks and then move on to comparing the differences between the two. Hopefully, then you will know why Tarsar Marsar was the one for me and most definitely a great alternative to KGL.

KGL, when introduced, had such a huge impact on the trekking community which allowed people to explore what I would refer to as the actual Kashmir away from the touristy spots. The excitement of trekking in the valleys of Kashmir is beyond anything you can imagine. The trek starts from the famous Sonamarg taking you through silver birch forests. The KGL trek takes you across three passes namely – Nichnai Pass, Gadsar Pass, and Jiz Pass. Each of these passes presents you with out-of-the-world views of the pristine blue alpine lakes. Negotiating your way from one pass to another, traversing breathtaking valleys and exploring about seven alpine lakes, the KGL trek is surreal. It is undoubtedly one of the most beautiful treks. 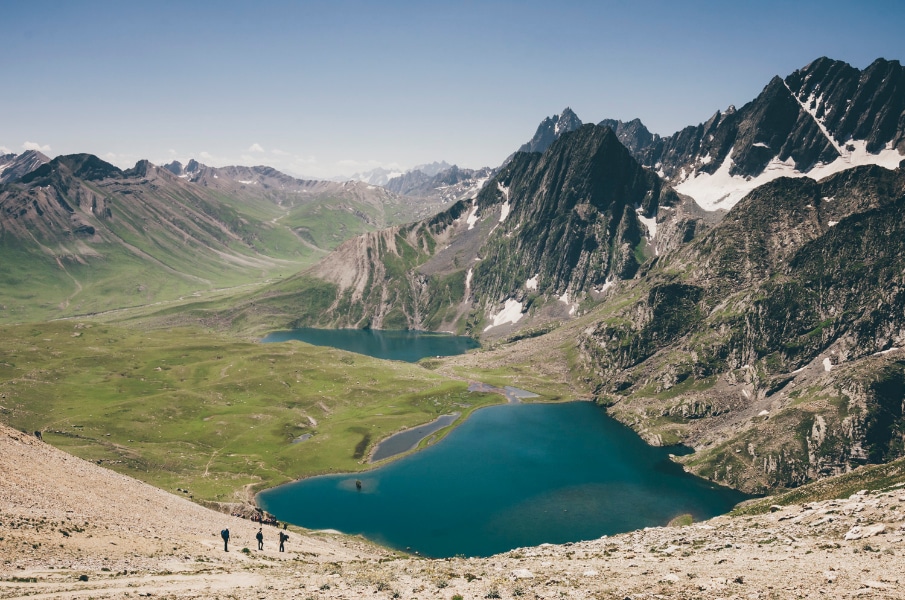 View of Vishansar and Kishansar lakes from Gadsar Pass

Tarsar Marsar lies deep in the valley of Pahalgam. This is a much more pristine and untouched trail which takes you from the quaint village of Aru, through the undulating meadows of Lidderwat and Sekhwas to the exotic emerald blue lakes of Tarsar and Marsar, the twin sisters. The trek takes you to what the Kashmiris refer to as the heart of Kashmir. With picture perfect campsites, the timeless beauty of Kashmir valleys and amphitheater views of surrounding mountains, the journey to Tarsar and Marsar takes you from one world to another. This is definitely Utopia. 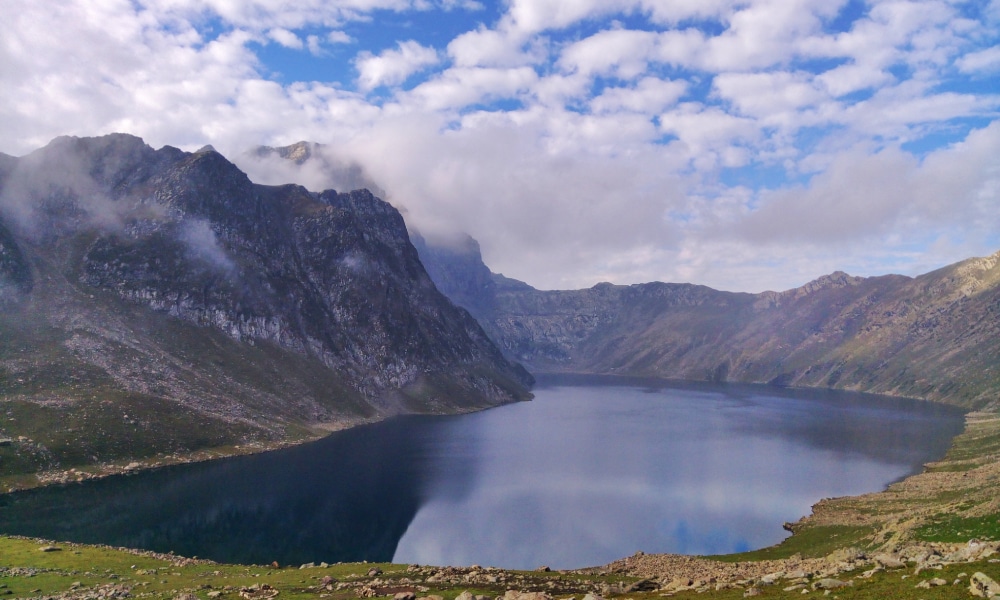 Now, coming to the difference between the two treks is mainly in the following factors.

The level of challenge varies significantly between the two treks. The KGL trek covers a total distance of 70km compared to the 40km of Tarsar Marsar, making KGL a relatively longer trek with 7 days to complete than Tarsar Marsar which takes 6 days. 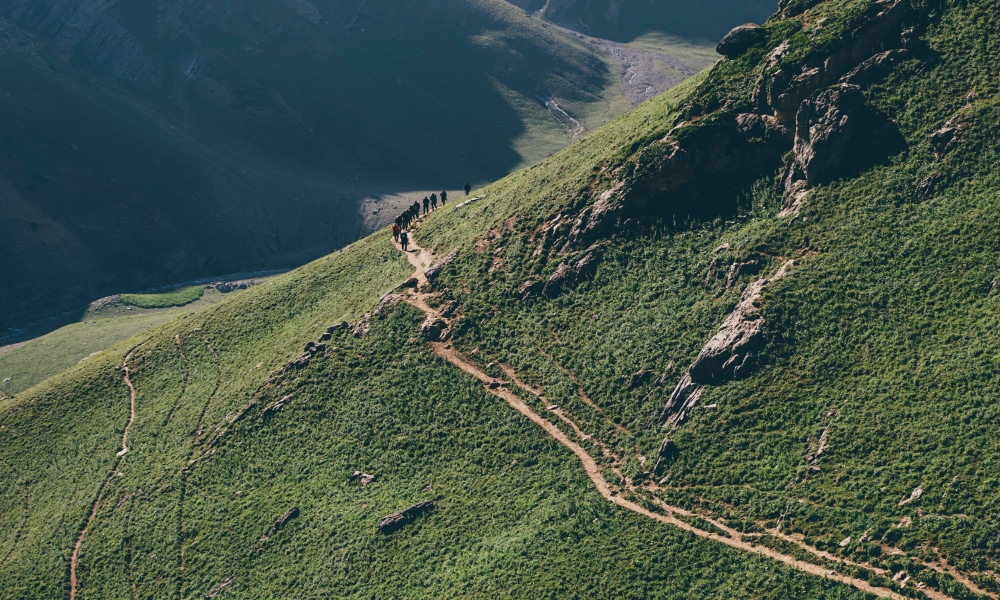 The trail to Satsar lake - KGL

KGL also demands more vertical distance to be covered with three pass crossings compared to only one pass crossing in Tarsar Marsar. Thus KGL is much more challenging while the Tarsar Marsar is perfect for novice and experienced hikers alike. 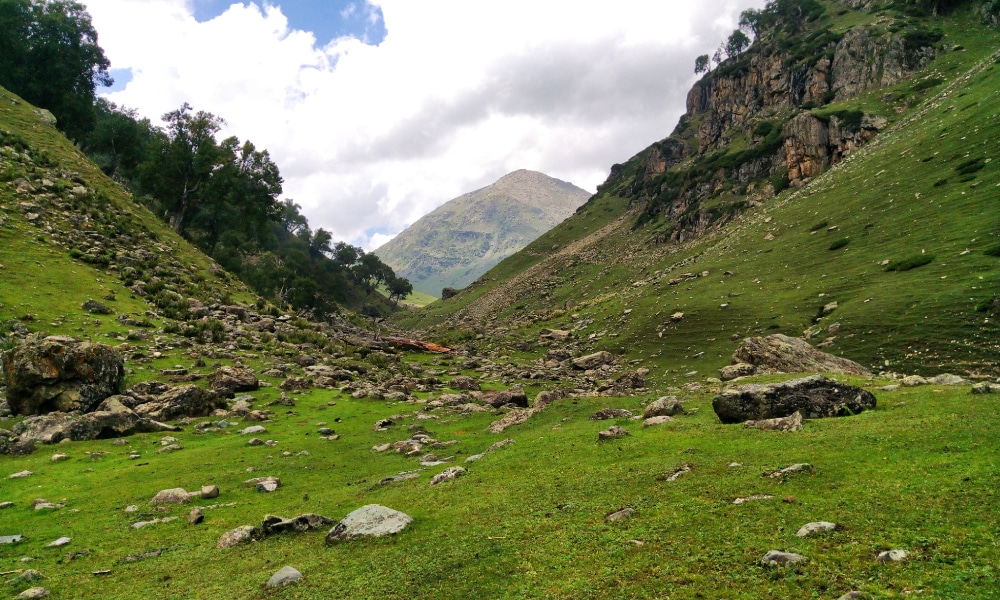 There is no shortage of phenomenal campsites in both Tarsar Marsar and KGL treks. The dreamy campsites which only Kashmir can provide far exceed your expectations. 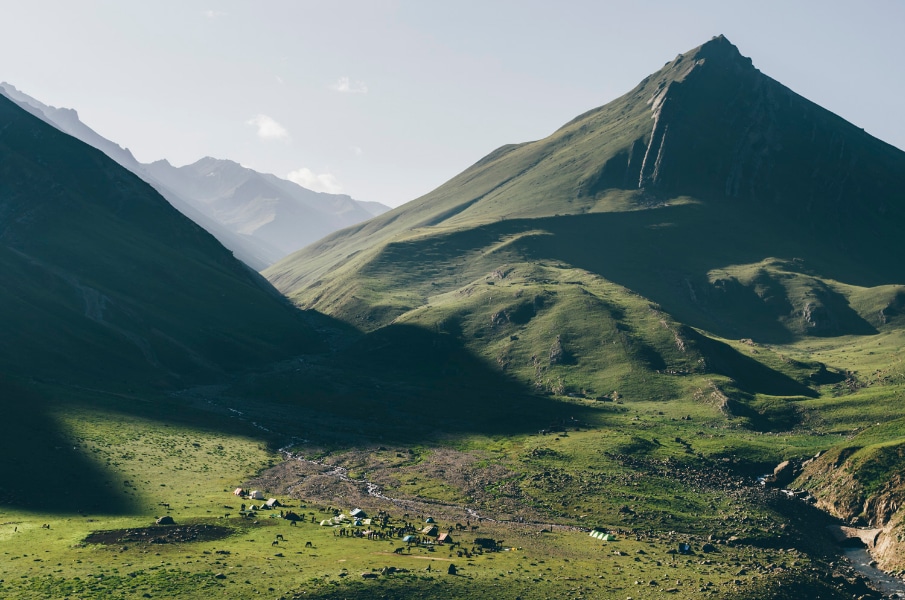 But, the unique aspect of the Tarsar Marsar trek which sets it apart from KGL or any other trek is the fact that you get to camp right next to the high altitude alpine lakes of Tarsar and Sundersar. Nowhere do you get to camp beside such sensuous blue glacial lakes. This puts Tarsar Marsar way ahead of KGL. You have to experience this to know the magnitude of awesomeness this has. 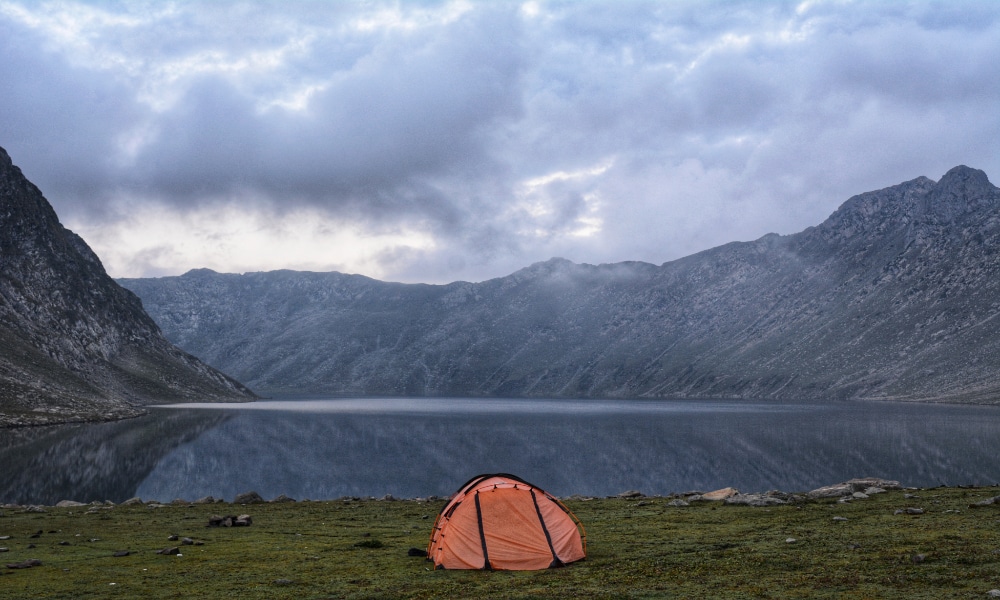 Tarsar campsite beside the Tarsar lake

Both these treks have different approaches to trekking. KGL involves crossing a pass on the second day into the trek followed by two more pass crossings with a continuous uphill and downhill climb. 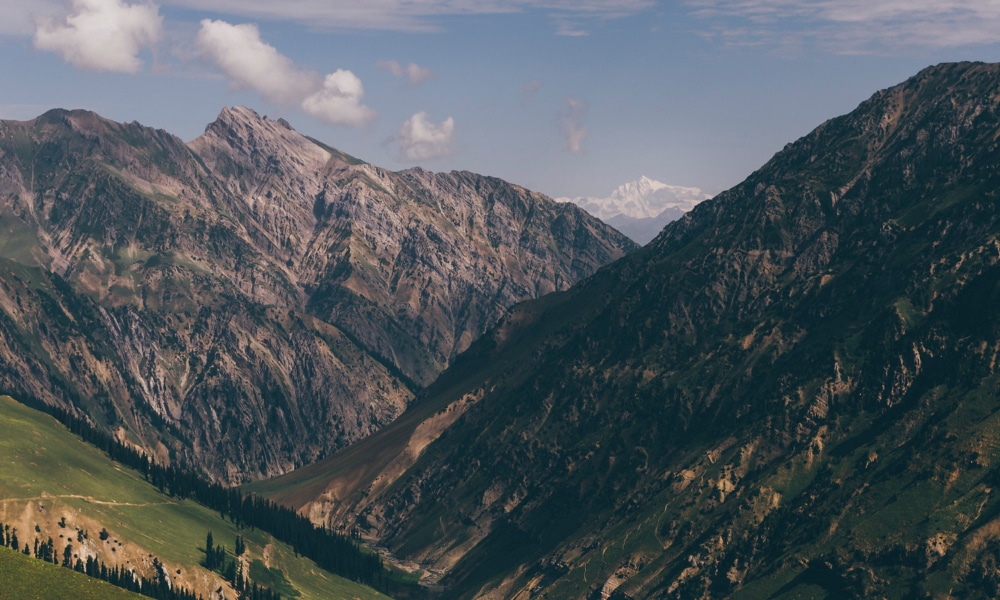 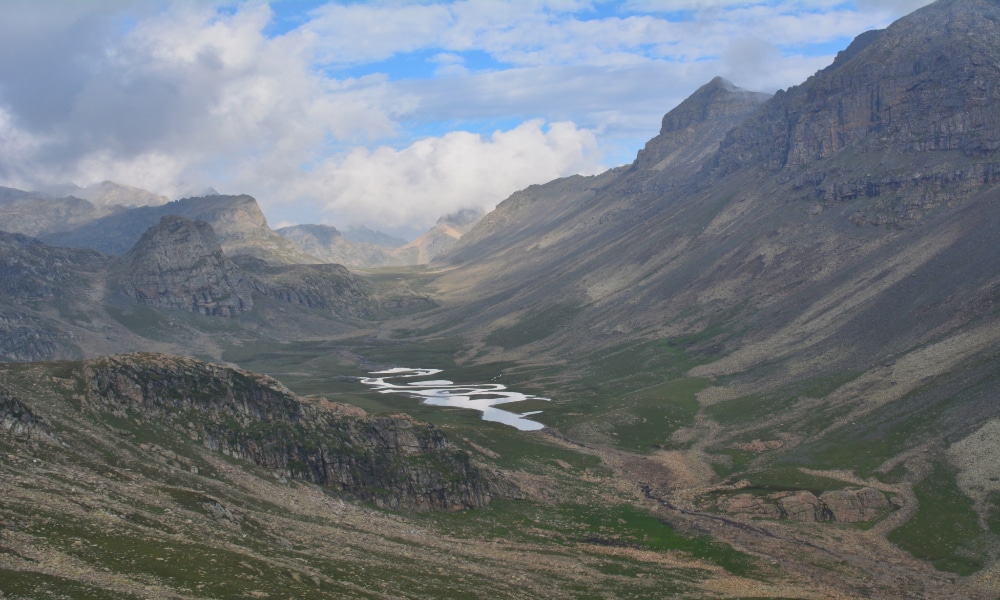 Tarsar Marsar trek presents you with two gargantuan lakes, lakes so big that they change colors depending on the angle of sight, weather, and season making it stand out from the smaller lakes of KGL. But, Tarsar Marsar trek has three lakes compared to at least seven lakes that you see on KGL trek. 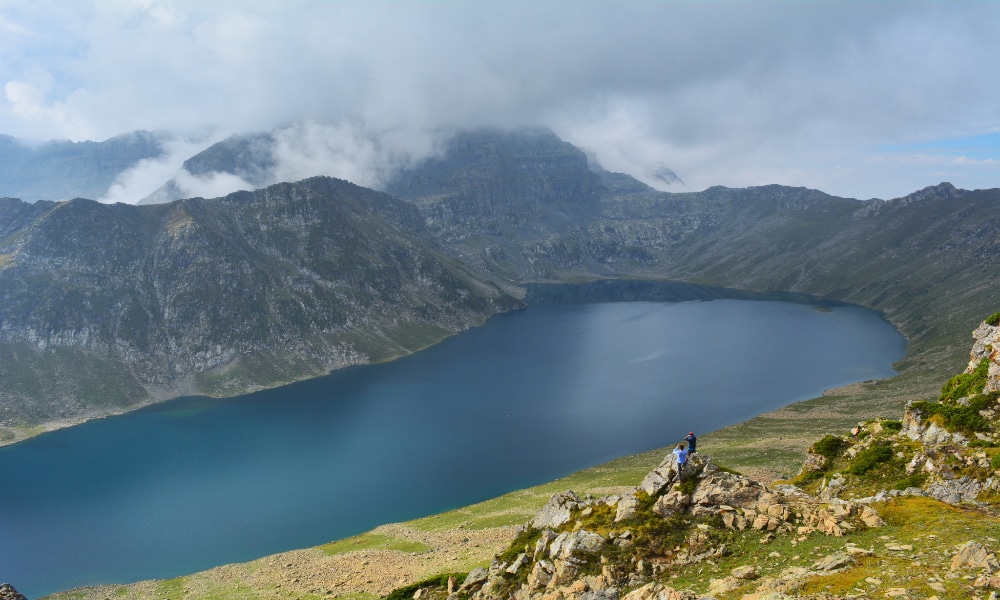 KGL is much popular, drawing a heavy number of trekkers who have dreamed to trek in Kashmir and have wanted to check this off their bucket list. Because of its high demand, you will encounter more trekkers and their campsites on the trail along with your team. Tarsar Marsar, on the other hand, has much less foot traffic. This trail is still fresh, off-beat and untainted, you won’t find many other trekkers on the trail and the chances of your team being the only ones is highly likely.

What these two treks have in common are never-ending meadows, grazing pastures, exotic blue alpine lakes, awe-inspiring valleys, and grand mountains. Trekking in the valleys of Kashmir is a truly remarkable experience. Hence, depending on what you are looking for in terms of terrain and topography, either of these treks must be chosen accordingly.

While KGL is considered as the prettiest trek in India, every Kashmiri would say that Tarsar Marsar takes you to the heart of Kashmir and is more beautiful than KGL for reasons they cannot explain. Which is true, because something so exotic, how can you put it in words?

KGL is picture-perfect in every sense whereas Tarsar Marsar is that picture, the most perfect trek there is.

Considering all these facts, the Tarsar Marsar trek is victorious in my book. But before choosing the one review your trekking experience and preference only then take an informed decision. As usual, happy trekking.