You have seen the photos of the glittering Kashmir Great Lakes, and if you have not, you are missing out. Anyone who visits these waters comes back raving about their vivid, cobalt blue color, the greenery that surrounds them and the sense of complete wilderness that can be felt start-to-finish on this route. 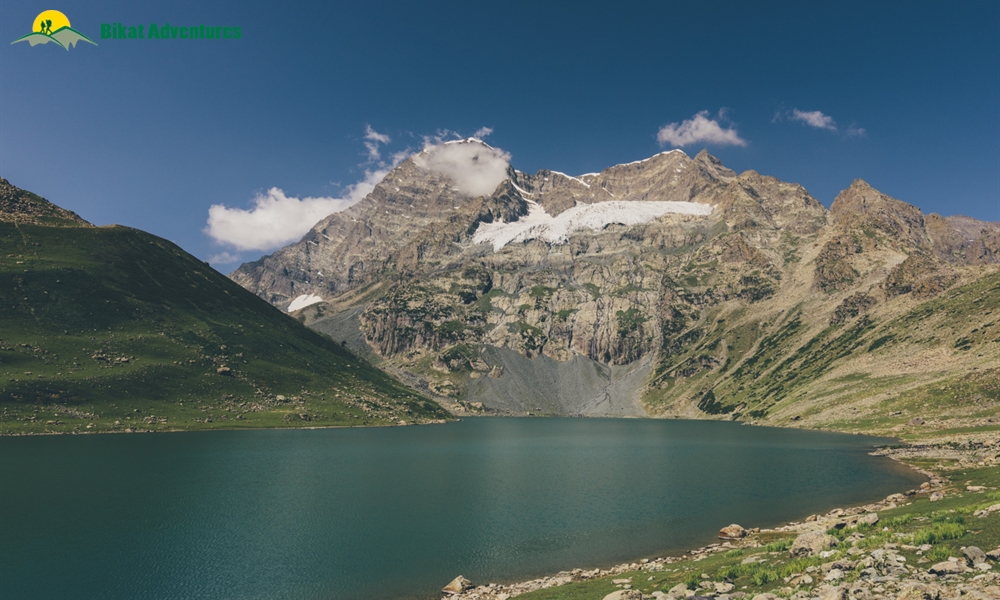 Beginning in Sonamarg and ending in Naranag, the KGL trail takes adventurers to the shore of six stunning alpine lakes in the span of eight days, with trekkers covering 69km on foot over high mountain passes and neon green valleys. Filled with mistique (local shepherds even claim a giant octopus lives in one of the lakes) and pristine views, it’s a corner of India truly worth a visit - but the lakes themselves remain the highlight of the week with their iridescent hues.

I’ve come across only a few other lakes quite as colorful as these. Ghepan Ghat is one that comes to mind, tucked away up a valley in the Lahaul region of Himachal Pradesh, that also has this mesmerizingly blue color. I’ll never forget the day we found it - it was a cloudy day and yet it seemed to almost glow turquoise. We were shocked.

The lakes of KGL are no different, and after seeing Ghepan Ghat’s color and that of those in Kashmir, my curiosity had been peaked. What makes them SO blue?? I went researching to find out…

First thing’s first, what type of lakes are the Kashmir Great Lakes anyways?

Answer? Oligotrophic. Sounds like a mouthful, I know, but this is the first huge part of answering why these specific bodies of water are so dang pretty, so I’ll explain a bit what this means.

One way lakes are categorized is to measure how ‘productive’ they are. In other words, see how many nutrients are in the water. If there is a high nutrient content in a lake, you will know because it will have a large amount of algae and possibly aquatic plants. These are called Eutrophic lakes, coming from the Grrek word ‘eutrophos’ that translates to mean ‘well-nourished.”

While they’re filled with fish, mainly trout, the Kashmir Great Lakes are the opposite. They are highly-oligotrophic, given that their waters have very low levels of nutrients. Oligotrophic lakes are oftentimes found in cold or high-altitude areas, as the temperature makes it difficult for the lake to be ‘productive,’ as it is called. They also are very oxygen rich and often support a lot of fish that need chilly, oxygenated waters to survive. 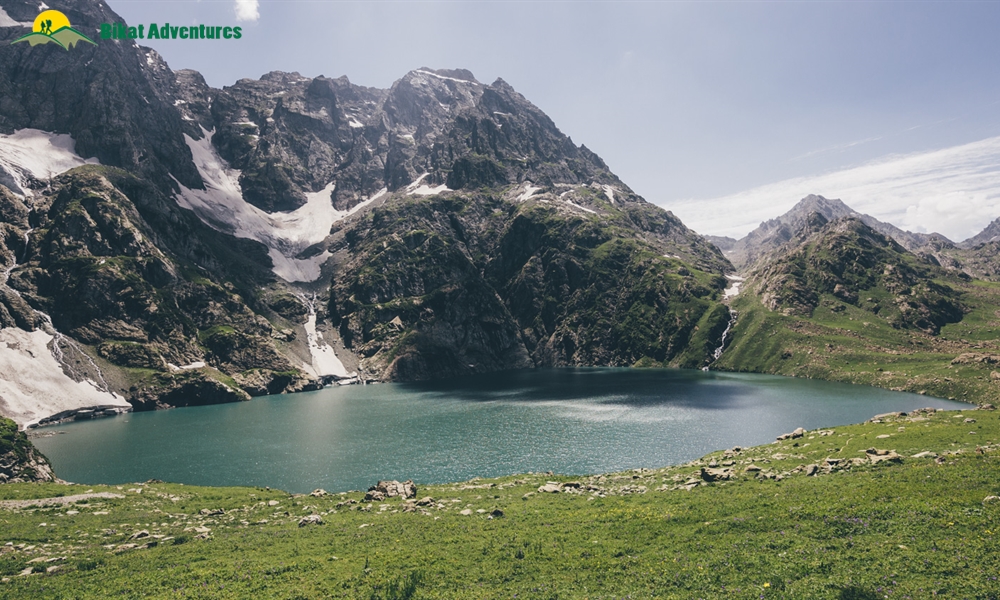 Here’s the first clue to why being oligotrophic contributes the KGL’s beauty - since they don’t support much plant life, these lakes have characteristically super-clean water, I mean crystal clear. With this information, we solve the first half of the puzzle to why these lakes look the way they do.

The second reason is not so much what the lakes do or don’t do, but rather where they come from.

I began looking into this since it was another thing I had been curious about - where do these lakes even come from this high up in the mountains? Then came the second half of the blue-water question’s answer - the Kashmir Great Lakes all come, at least partially, from glaciers.

Look through the day-wise route of this trek to see how each lake is formed, and here’s what you’ll find:

Vishansar Lake? Inflow from Krishansar lake (aka snow and glaciers).

Satsar? You guessed it - glaciers and snow. 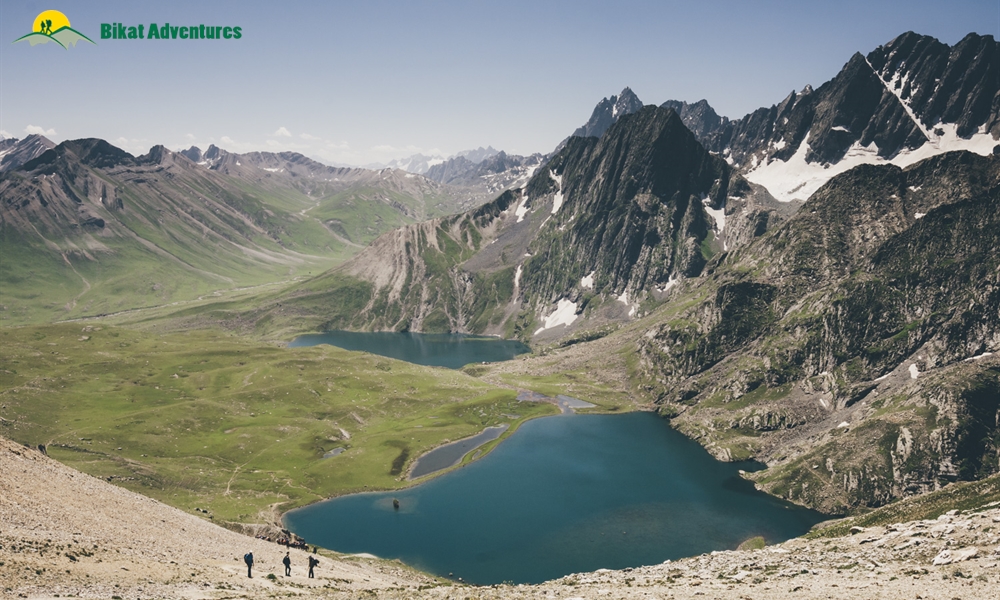 If you haven’t picked up on it by now, glacier-fed lakes are the other piece to our blue-water puzzle, and here’s why. When glaciers move, they do so slowly and with immense force and pressure on what lies below. Underneath that massive frozen river is a layer of bedrock being slowly ground into a rocky dust so fine that it is often referred to as ‘rock flour.’

This rock flour is so small that it becomes suspended in the meltwater streams that then flow into glacially-fed lakes, brilliantly reflecting the sunlight and appearing to those viewing the water to be shockingly blue.

The color of the lake depends on the angle of sunlight, amount of sunlight, angle you look at it from, what glacier the lake is fed by and even what season it is. That's right, depending on where the light is coming from and how much, coupled with where you stand, can completely change what color the lake looks like it has. What’s more (and what explains KGL’s different colored lakes), is that each glacier has bedrock of slightly different composition under it, and grinds different amounts of it. This in itself changes how emerald or blue the lake might look.

Like the KGL trek, a similar trek in the Kashmir valley known as the Tarsar Marsar trek also hosts emerald blue lakes, thus making it a great alternative to KGL.

Even the season contributes to this - when the glaciers have just begun to melt for the year, lakes have a less intense hue, as the rock flour hasn’t yet made it to the main body of water. About mid-way between the beginning of the annual thaw and the beginning of the following freeze, the maximum quantity of rock flour has been suspended in the main lake, making it dazzle.

So there you have it, one mystery of many in this world, solved. While we need to do a bit of research to know why these lakes look this way, no one needs to Google why so many people want to visit these waters. Plain and simple, they just indescribably beautiful. 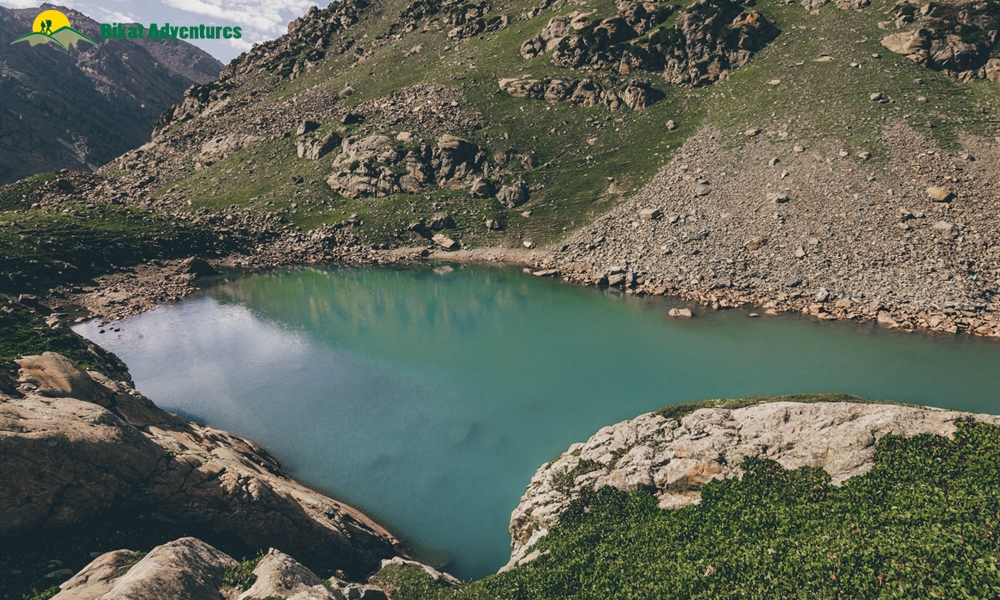