A Secret Itinerary: What Lies Beyond Deo Tibba Base Camp

We are all mountain-lovers here, so I’m going to be completely honest with you, because that’s what you deserve- so here goes nothing:

Mini Chandratal, visited on Day 4 of the Deo Tibba Base Camp trek, is, to put it quite frankly, a joke.

To use colorful figures of speech, it is little more than a glorified, high-altitude puddle. It’s as if some clumsy trekker reached the site and spilled some of their water on the rocks. I didn't even take my camera out to take a picture of it, and I take pictures of everything. So there, I said it.

We musn’t judge our puddle friend for its appearance though, because honestly, it has a lot of competition. Let me explain.

On Day 3 of the trek, you reach Tainta campsite, at an altitude of 3,900 meters. For three days, you’ve been climbing through a kaleidoscope of wildflowers, passing by towering waterfalls and ascending through fertile valleys to reach this base camp where true experts launch their summit attempts for the peak itself. 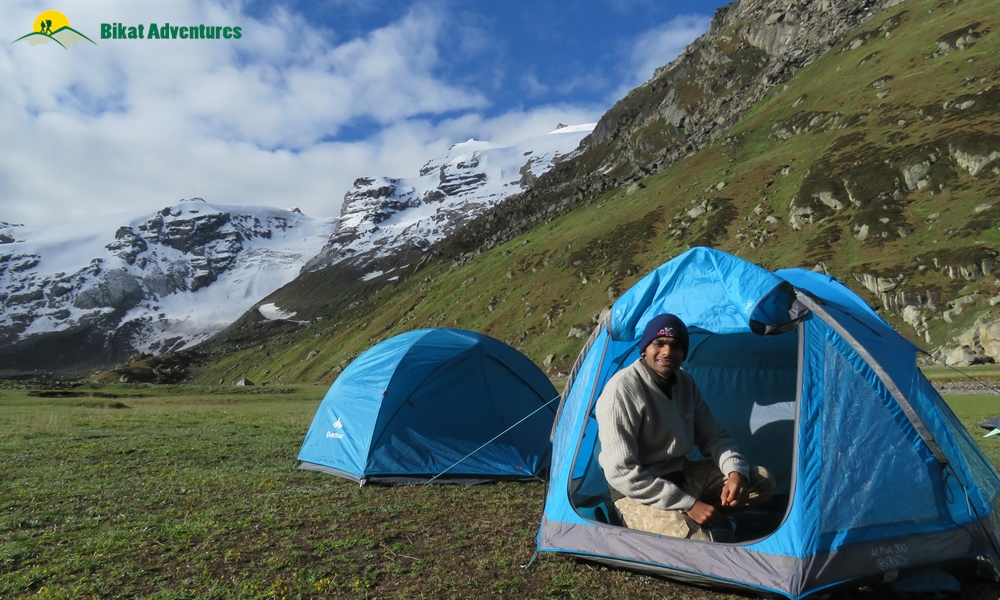 Day 4 brings a much-welcomed day hike from the camp up to Mini Chandratal and back for one more night’s stay at this high-altitude gem of a campsite.

So here we are, climbing from Tainta up to this much-anticipated Mini Chandratal, jumping off the sides of the playfully-tall boulders that have somehow lodged themselves trail-side, ready to see what lies over the ridge.

We were not disappointed.

Now you must be confused. Didn’t I just say that Mini Chandratal is hilariously underwhelming? What were we so excited about?

Everything else, that’s what.

While Mini Chandratal goes unnoticed like the Ugly Duckling, we stand, mouths agape, in awe at the jagged peaks now visible from our newly-earned vantage point. They tower, their frosted tips like snow-capped blades threatening to cut the sky in every direction. At the center, a shrine of wind-faded prayer flags, flashing their greens, yellows, reds and blues contrasts against the stark world that we’ve found ourselves in. 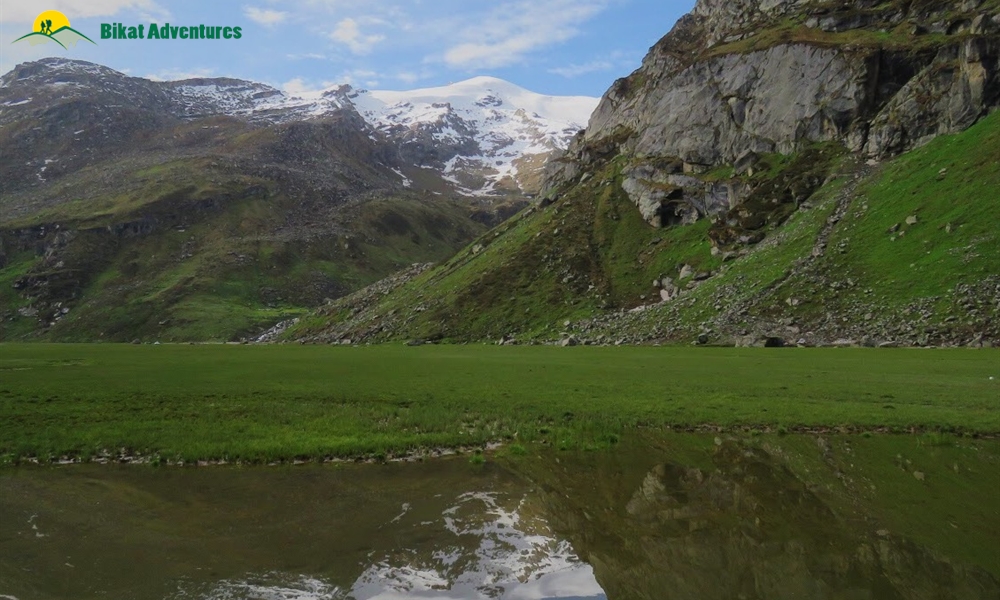 It’s no wonder poor little Mini Chandratal fell by the wayside- how do you compete with such a view?

Then we hear the words that change the course of the afternoon- “real Chandratal.”

In our minds, two things happen immediately. One, inescapable curiosity over what this “other” lake is swarms our thoughts.

Second, there is this taunting quality about the fact that it’s called the “real” Chandratal. Almost a playful dare to find it, like your mission is not complete until you do.

I suppose you can guess what we did next?

Under the care and guidance of our local guide and trek leader, we scramble up what appears to be an endless, nearly vertical mountainside dusted healthily with rocks for another 40 or so minutes. 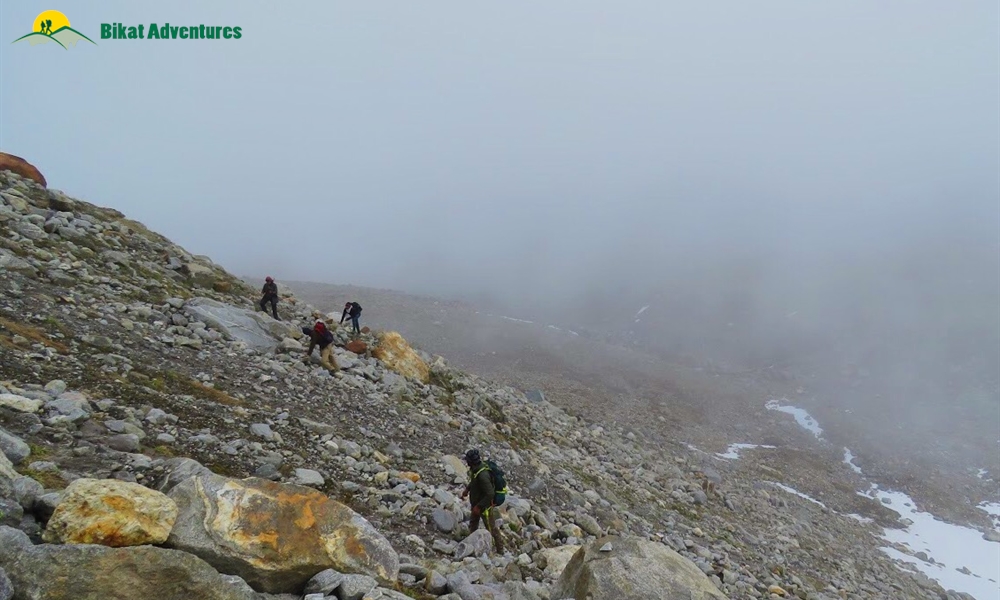 Several times we pause to look down, and then immediately wish we hadn’t. If anyone knows a word for something that is steeper than steep, please let me know.

Suddenly we hear Priyank, one of the participants, yell from up above us. Justifiably worried, we crane our necks in worry to see what’s happened.

It’s not huge, but something about it enchants us. There’s a half-frozen waterfall cascading down into the basin of the sky-high, hidden gem. You’d never know it was up there. It felt as if we were pioneers in a new land- that we had truly found this thing. If the view of the surrounding peaks from below had been spectacular, then what we were seeing now was unbelievable. 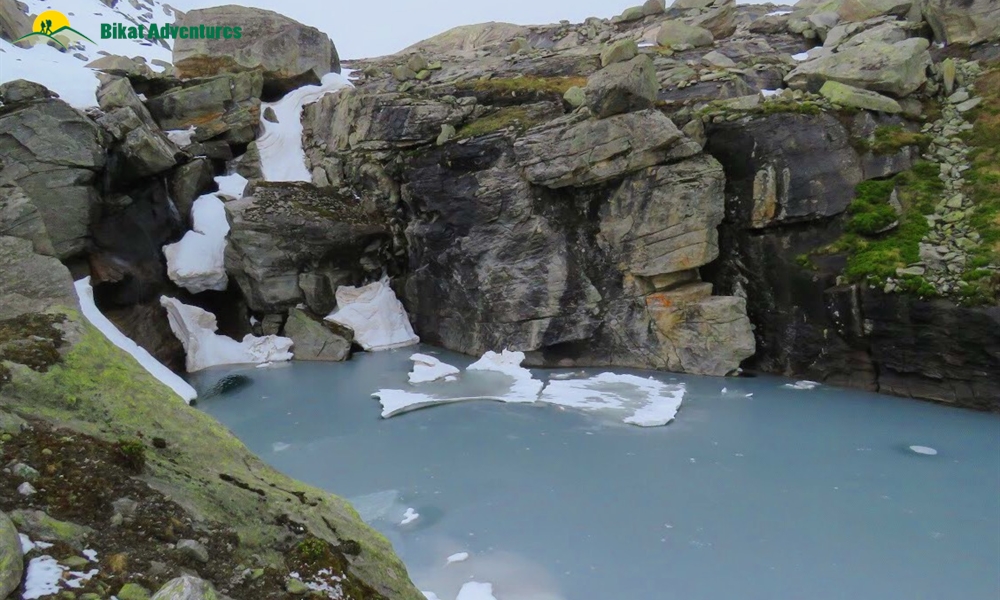 After some much-deserved celebration, it was time to descend from the clouds and return to our base camp that now felt homey and welcoming, compared to this brave new world we had entered.

I feel like so many blogs of mine end with a participant batch and I with smiles on our faces and cups of chai in our hands. Honestly though, that’s a pretty good place to be, and so is the “real” Chandratal.

So there you have it- the secret add-on of Deo Tibba’s Base Camp trek, and the icing on the cake, if you ask me, to an unforgettable week.