Pin Parvati Trek was on my bucket list for quite a sometime. So on December 24th, 2016, I finally booked my trek to Pin Parvati with Bikatadventures for dates 19th Aug 17 to 29th Aug 17. The wait of 8 months was long and I read every article, watched every video on youtube and exercised every day to build my stamina. As soon as I entered in the last leg of my preparation in August starting, I got a bad stomach infection. I was counting on my prayers to make me alright before the first day of the trek. Completely on antibiotics and ORS for 2 weeks I boarded my flight from Delhi and took an overnight bus to Bhuntar at 7 PM.
The bus journey from Delhi to Bhuntar was another thrill due to rains and news of landslides on the same road. Nevertheless, I reached Bhuntar at 7 AM. As pre-decided we met the Bikatadventure team and other fellow participants at Bhuntar bus stand at 8 AM and headed straight away to Phulga which is last village accessible through road. It was a 48 KM long drive which took roughly around 2 hours.
At Phulga we met our trek leader, our assistant trek leader, and the other team. After breakfast and a small introduction we started the first leg our trek.
The main trek starts from here when we saddled up our rug sacks and embarked on the 10-day journey on foot.

I have heard about Kheerganga and it’s mystical healing powers from lot of people so I was really looking forward to it. I wanted to dance with the excitement of starting the trek but my still upset stomach stopped me from doing so. I was determined to do the trek but obviously not at the risk of health issues which would have been troublesome not only to me but for the entire group. So I decided to trek till Kheerganga and return back if does not feel any better but as they say “nature heals”, it worked for me!!
One night in the woods, breathing the fresh air and drinking the mountain water and my digestion was improved and my stomach was alright and I was confident about completing this trek.
Kheerganga was our first camp on Pin Parvati Pass trek surrounded by mountains from all the 4 sides, famous among the pilgrims as it is said that Hindu Mythology God, Shiva meditated here for 3000 years and water is said to have healing properties. Soaking into the hot springs, staring at the tall giant snow-clad mountains and watching hot steam mixing up with the surrounding fog is worth more relaxing and rejuvenating than any luxurious spa in the world!
The ascend from Phulga to Kheerganga was little arduous but worth all the joy you get by immersing in hot springs of Kheerganga. 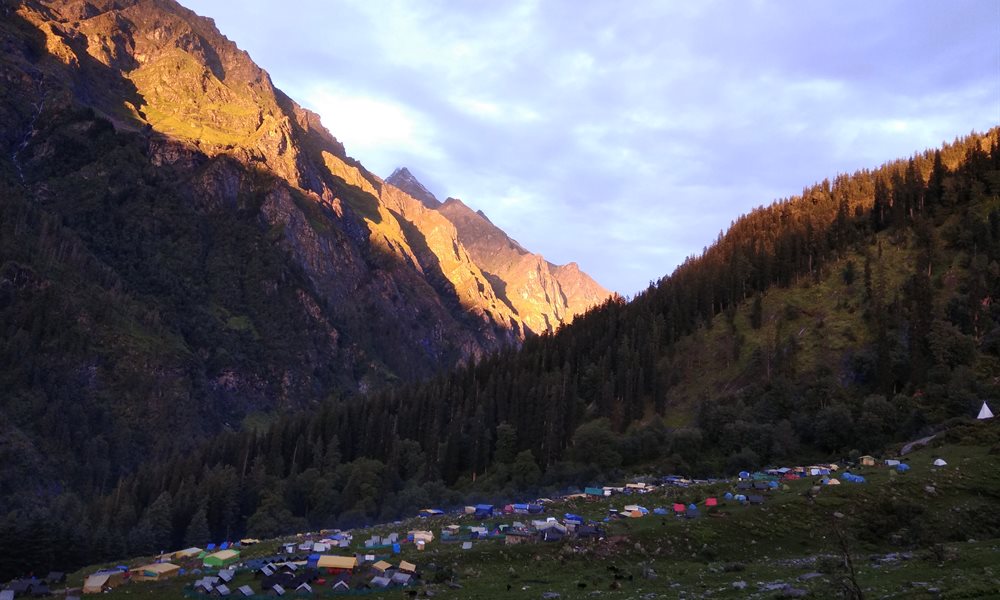 Trek from Kheerganga to Tunda Bhuj was fairly easy as the ascend is gradual and almost 70 percent of trail is amidst the sub-alpine forest. Tunda Bhuj drives its name from the birch trees (Birch-Rhododendron, pure silver birch etc.) that are prevalent here. You get to see enumerable waterfalls on the way. It is one of the most beautiful trails where you get to see lot of wild flowers, birds and berries. Since the monsoons just ends in August, the trail was pretty much washed away and fallen trees were blocking our way but everything was complimenting the beauty of the trail.

Cascades, the mountains and the trees ... a perfect picture! 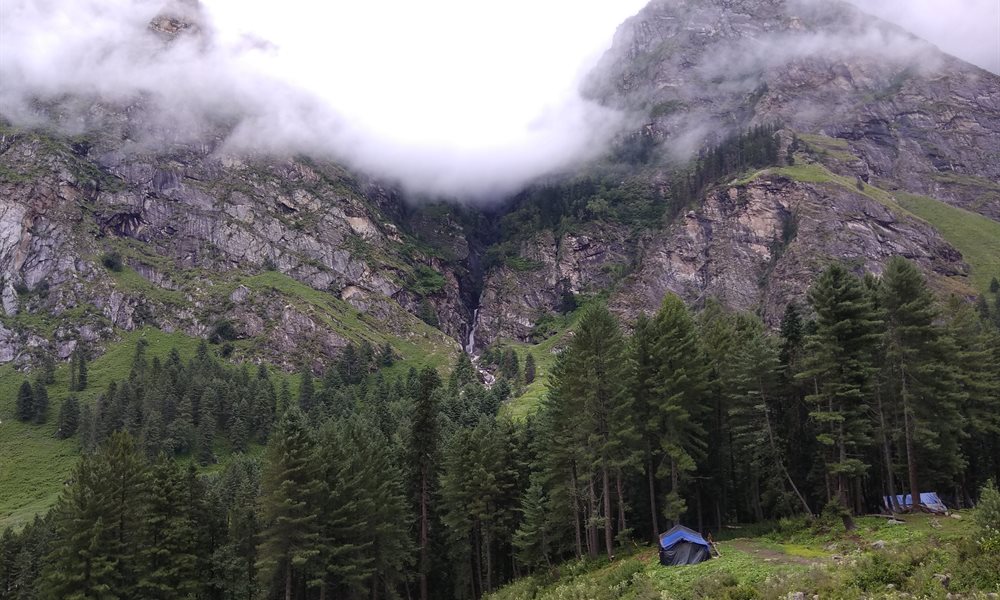 Tree line ends at Tunda bhuj therefore from Day 3 onwards we have to be extra cautious about the oxygen level in our system therefore we were advised to drink lot of water in order to acclimatize to high altitude. Climb till Tunda Bhuj was an easy walk with mild ascends and descends but day 3 to Thakur Kuan was full of adventure and adrenaline rush. There were total 3 boulder crossings but not as scary as it sounds though we really had to be cautious while crossing. Also, the thing to look forward was a ride in the manual pully which is used for crossing the river. After reaching camp we had a rock climbing session which proved pretty useful the other day on the way to Odi Thatch. 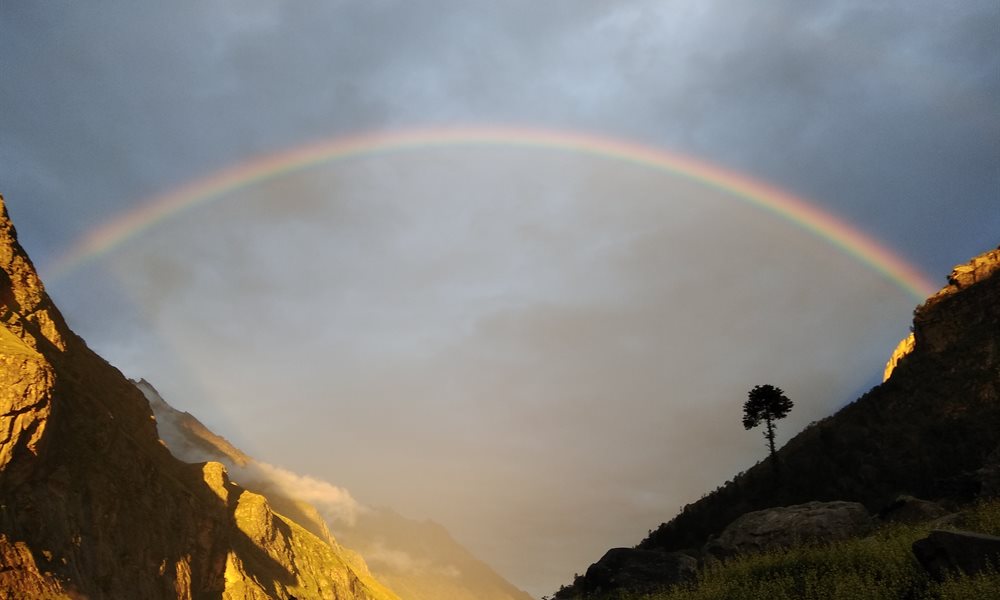 You must not be expecting a cakewalk, were you? 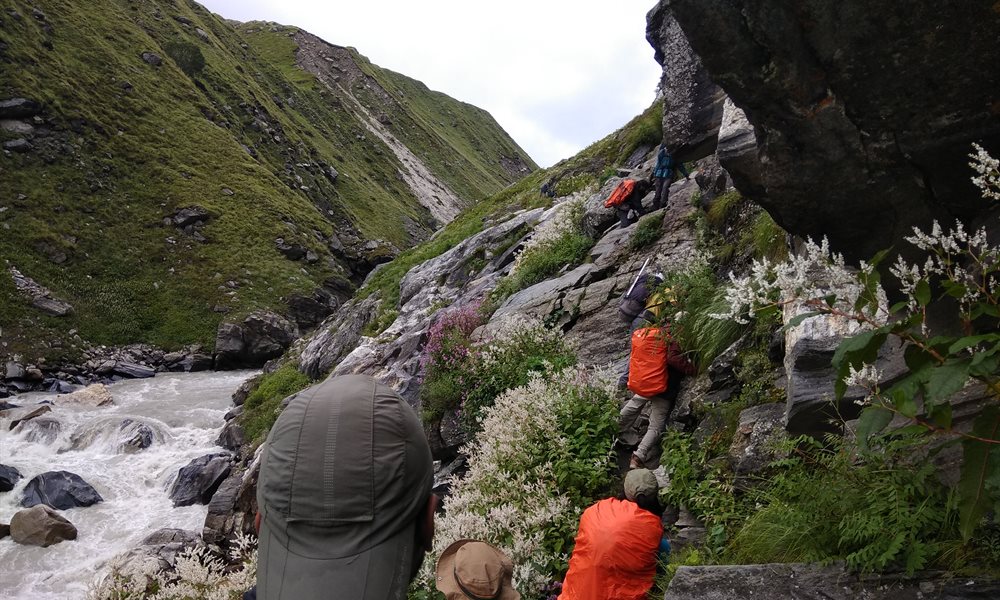 Apart from challenge of crossing Pandu Pull 1 and Pandu Pull 2, the trail gradient from Thakur Kuan to Odi Thatch was comparatively easy! On the way from Thakur Kuan to Odi Thach we had to cross the Parvati river twice through two bridges: Pandu pull 1 and Pandu pull 2(As per hindu mythology Pandvas placed these rocks for river crossings hence named after them). Pandu pull 1 is a boulder stuck in between a waterfall and river, slippery from one end and few grip points at other. Pandu pull 2 is made up of pile of rocks and is rather easy compare to Pandu pull 1. Other than the Pandu pulls and their arduous crossing the trail was pretty much flat. In evening we went for an acclimatization hike and was rewarded with sumptuous goat meat in dinner(and veg food for vegetarians). 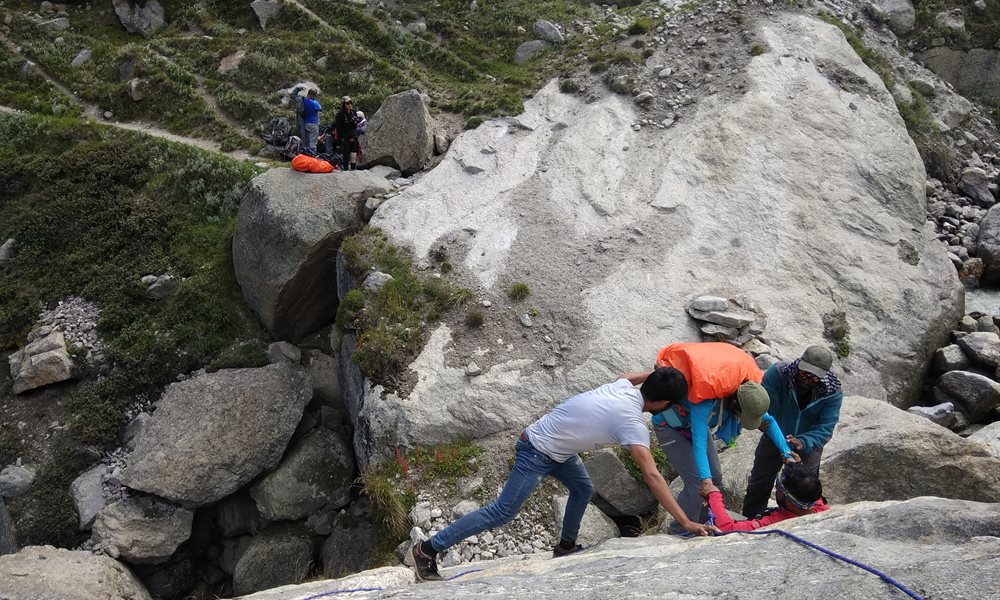 The sumptuous goat meat played its toll on me and my recently recovered stomach got infected again but just mildly. I was losing energy but was fit enough to walk. The walk from Odi Thatch to Mantali was simple except for the last stretch of 300 m. Few meters before mantali lake there was a Shivling adorned with sacred temple stuff. This place is known as mini Mantali and the origin point of river Parvati. It was an amazing feeling to witness the origin point of river that we were traversing along since part 4 days. Pristine, serene Mantali lake was adorned with the reflections of encompassing giant mountains. We had our learning lessons of tent pitching over there. 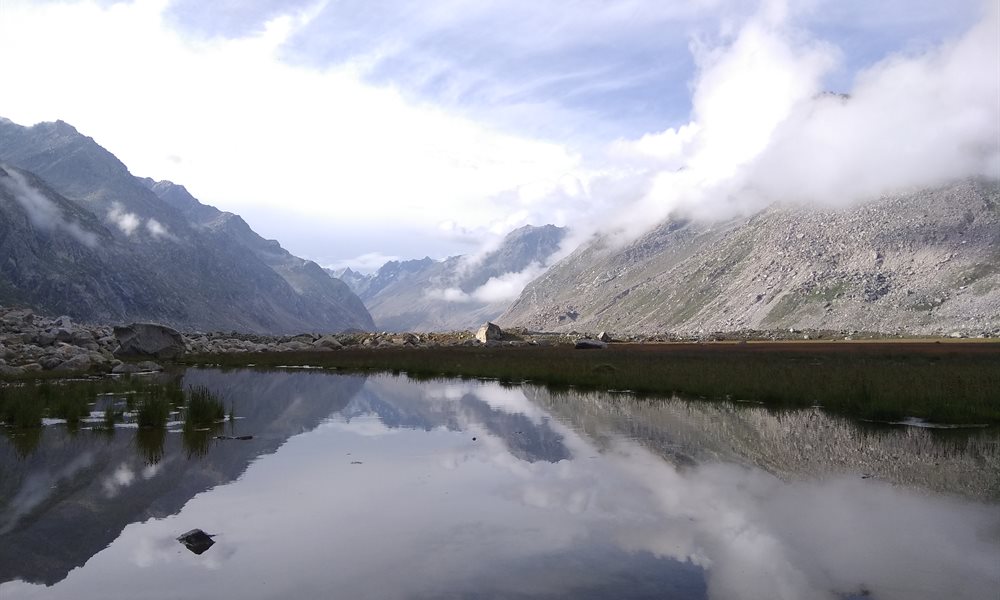 The climb from Mantali to Base Camp 1 was steep and had lot of stream crossings but it offered one of the best views of the trek as well. A glimpse of fresh water lakes embellished in perfect blue color, the curvy parvati valley that we were leaving behind fading in the clouds and drenching in rain just before we reached the camp. Camping along the glacier was an experience in itself. The excitement of tomorrow and the rumbling down rocks at night kept us pretty much awake! The sky cleared at night and we got best view of milkyway.

First glimpse of glacier at base camp 1 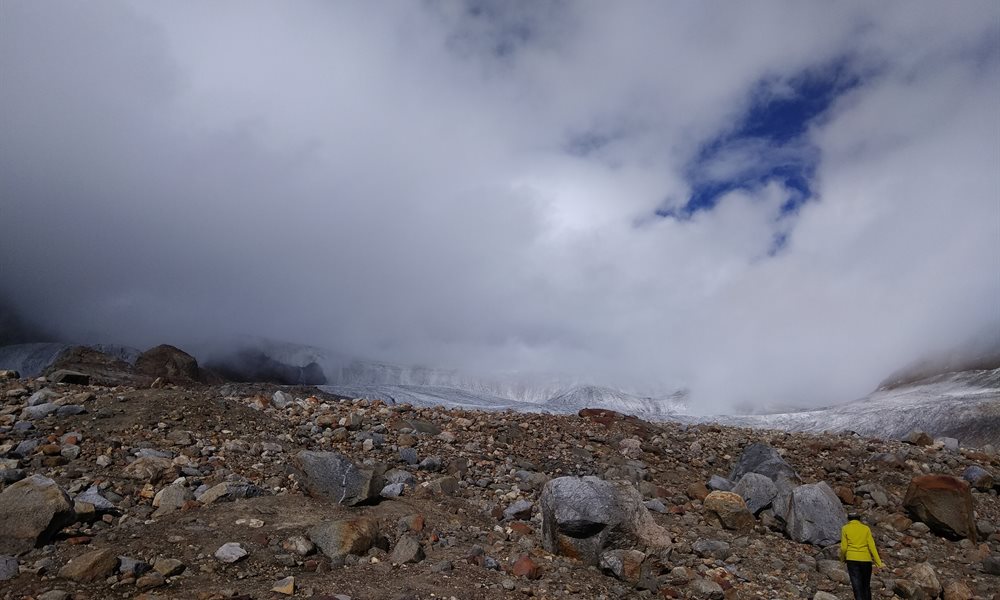 The daily routine check-up showed slightly less oxygen level but I was cleared to cross the Pass. We got up at 3 AM and started our climb at 5 AM. It was beautiful, it was mesmerizing and it was cold. I tried to drink as much water as I can to balance the oxygen level in my blood. The climb was easy but the thin air and altitude was making it really tiresome. We were roped up in a group of 2 having 6 members each to avoid any fall in crevasses. Crossed enumerable crevasses, crevasses that were deep to the hell, crevasses that showed the age’s old snow clamped and blacked over decades. The mountains were enigmatic, they were huge and we felt like the tiny creatures crawling in a line awestruck by the beauty we were surrounded with. As we gained the height, the oxygen level decreased further more and I started developing the symptoms of AMS but the Bikatadventures team was fully equipped with the rescue equipments and ofcourse quite a lot of experience and knowledge on how to handle such situations. Nevertheless, it was mild and I made it to the top on my own where I was given a puff of oxygen and I was completely fine in just 5 minutes.
The whole team made it to the top, there were hugs and laughters, there were tears of joy, there was a feeling of accomplishment. After spending almost half hour at the top, we started decending to our base camp II. 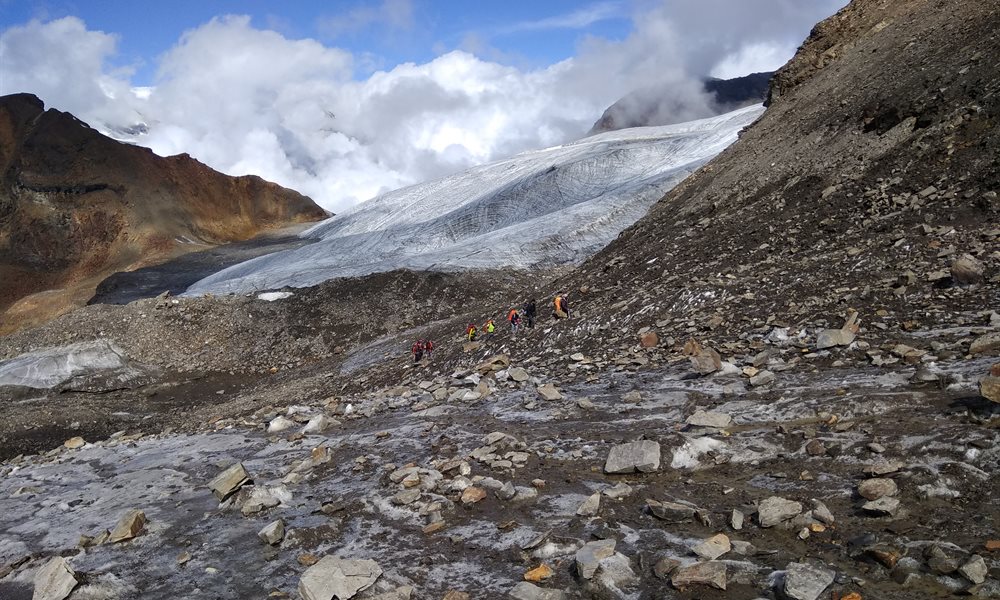 Descending down with a bag full of memories :) 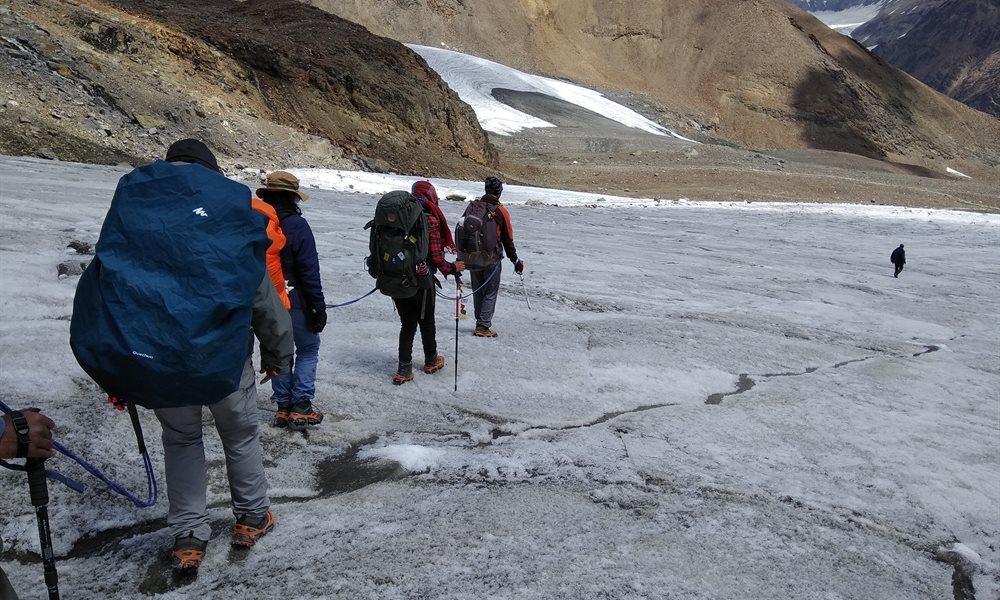 The night at Base Camp 2 was really cold due to showers. We were camping right at the foot of glacier besides the stream which we had to cross first thing in the morning and trust me that was the most difficult part of this trek. It was 7 AM and we were chilled to the bone when we had to remove our shoes and cross the stream. We literally stopped feeling anything and our feet were stone hard but as advised no body took rest after stream crossing and we immediately put our shoes and started walking to keep the blood flowing. We wouldn’t have got the frost bite because the temperature outside water was more than the water but surely we had a close experience. The rest of the journey was an easy walk in the dusty stony mountains of Spiti. Wichkurung was our last camp, last night to sleep in tents under zillion of stars and it was the most beautiful camp site. Our camps were pitched next to the stream and we had a perfect view of valley. We all were nostalgic as the trek was coming to an end but Bikat Adventures made sure to make it memorable for us by surprizing us with a chocolate cake at the height of 11482 feet totally amidst the wilderness!! Enjoy

The transition is that drastic, from green valleys to rocky patches 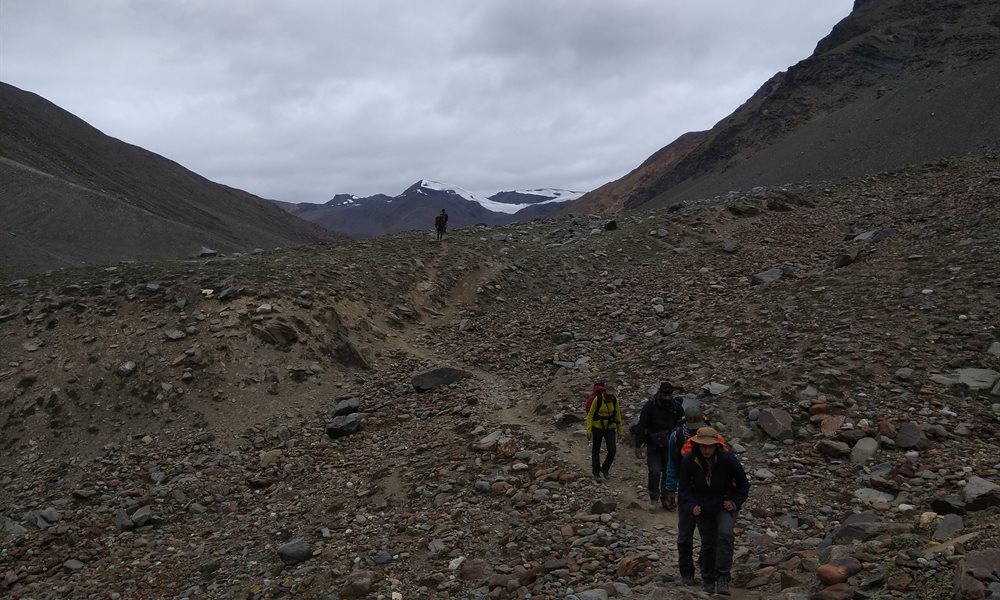 Wichurung Thatch to Mud Village is pretty must a straight walk along the river over loose rock terrain of Spiti mountains. Not until we saw the pagal nala, we were scared throughout the entire journey on how will be crossing it. Pagal nala was the last stream that we crossed on foot.Named as Pagal Nala because when the ice bridge/barrier melts with the day heat the accumulated water suddenly comes gushing down via this stream hence named as Pagal Nala. In reality it is a well laid bridge. We checked into a Hotel after reaching Kaza and had the whole evening with us to explore around

Mountains of Spiti has its own charm 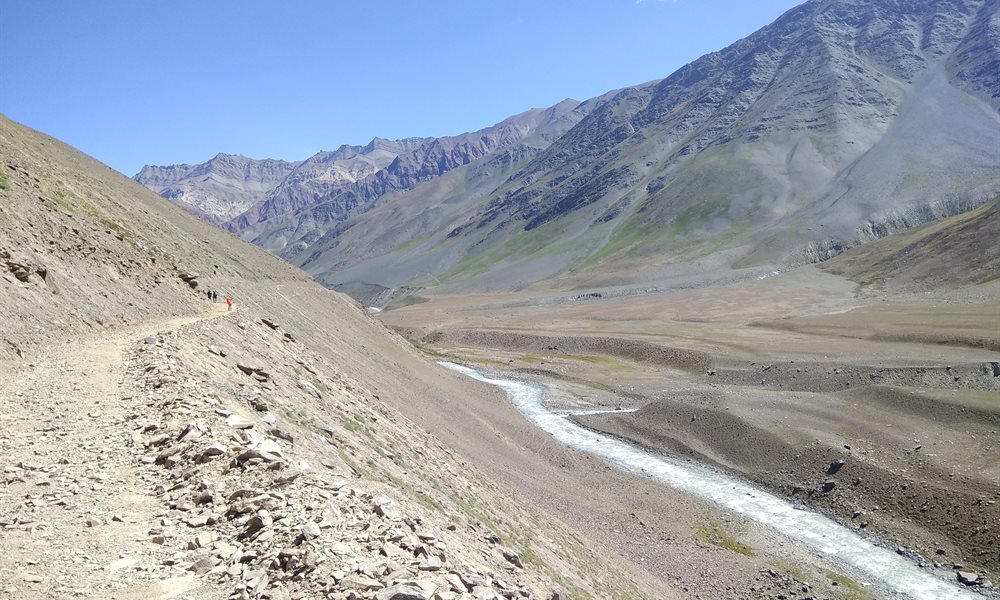 Last day of the trek. No one wanted to get up but obviously we had to. We took a little de-tour from our journey and visited Kee Monestry in Kaza. On the way to Manali we crossed the famous Kunzum pass and had our lunch at Chacha Chachi ka Dhaba at Bhatal. It took us almost 8 - 9 hours to cover 200 KM. No body wanted it to end but that's how the life goes on. So, with the promises of meeting again and biding adeu to the moutains we boarded our buses from Manali to back to our cities with a promise to keep , to be back again!! 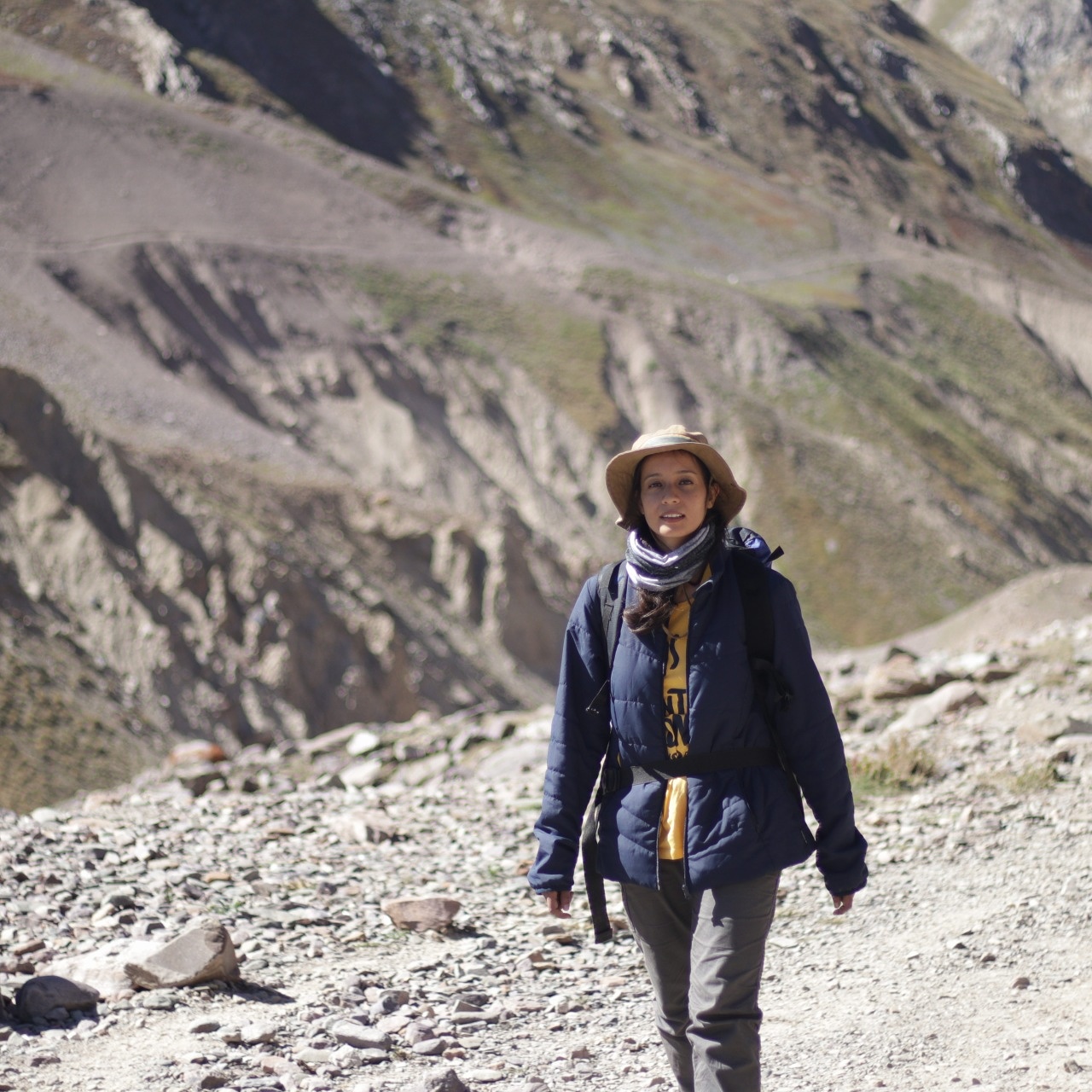 Dream in my eye, to see the world before I die. There is a forever, non satiating ticklish feeling o Read more