We reported at Kafnu on 14th evening. Our home stay was near a hydro project dam, and the view was amazing. The next day we woke up to a moderate rain shower outside, and everything was looking afresh and clean. 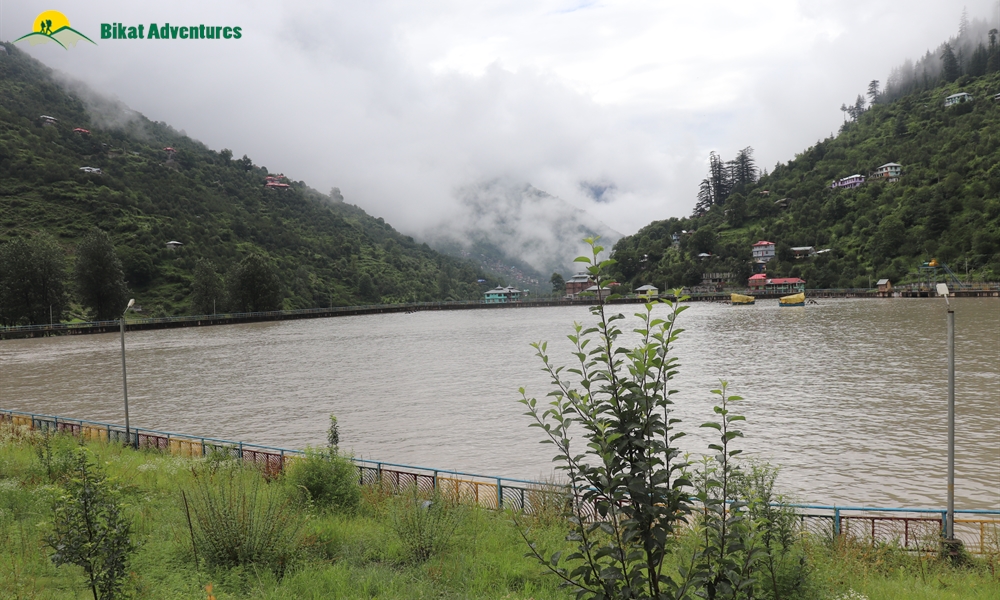 We had to cover the total distance of 10km, out of which 3km were on road and the rest were the moderate day’s hike. We left the road behind for the coming five days at Ral Thatch and made our way into the dense forest of pine trees. I had never seen the first day of a trek to be as interesting as it was at Pin Bhaba Pass.

We entered and exited the forest multiple times. On the way, we crossed the Homti Meadow. We specially had our water bottles filled at Shalti meadow, which is known to have medicinal properties due to herbs found at Shalti. We had our lunch at Rakhstum Rang, a small meadow nestled between the mountain range. We entered into the Gyareh forest after crossing Gyareh Nala, where I spotted some wild cherries and mushrooms. The forest trail ended at Dangyabe, where the view opened up to the wide meadows stretched in the span of 3km. It was one of the most amazing camp sites, amidst the vast meadows surrounded by mountains and the Bhaba River flowing through the centre.

The night was cold but it couldn’t stop me from sitting outside along the river and staring at the giant mountains until everything got covered in thick fog and it started to rain. I called it a night and went to sleep. 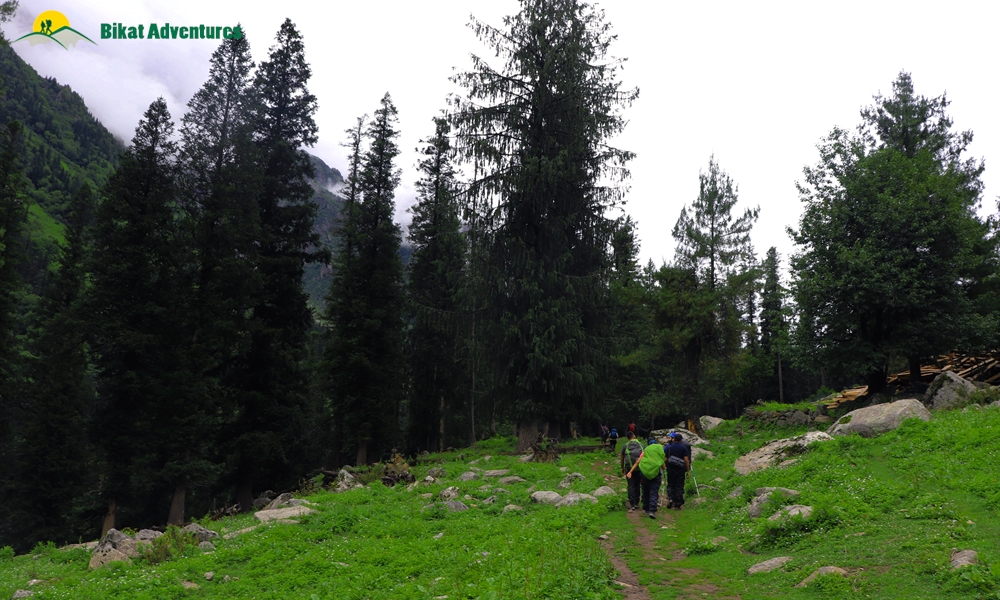 On the way to Mulling 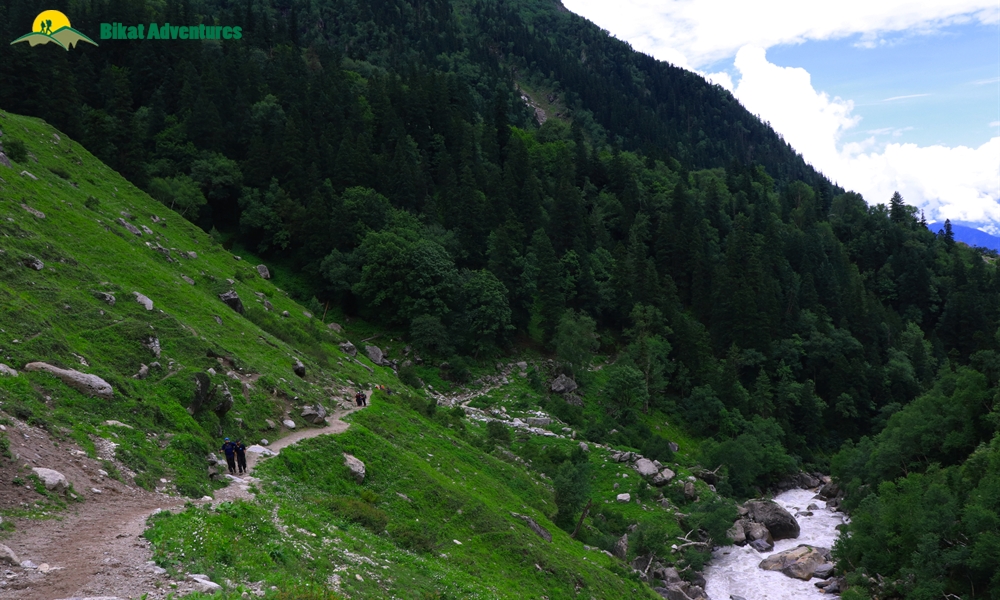 Our day started with the energizer game and the misty morning of the Mulling. The first camp site definitely raised the bar for the coming ones, and I was excited to see how the terrain would be ahead. The trail was well marked, and it was exciting to know that the same trail is used by the shepherds who walk from Kafnu to Mudh in just 3 days. We crossed the Wasti meadows and then the Negul valley from where the steep ascent started for Kara. The journey from Mulling to the Kara was so beautiful that we were compelled to stop now and admire the view or to click some photographs. Kara was nothing less than a fairyland. Another huge meadow, adorned with bright pink flowers, and of course the turquoise green-colored Kara Lake took our breath away. We had our tent-pitching session, and the evening was spent exploring the meadows and talking by the lake side.

Local Shephards Having Their Time Near Kara Meadows 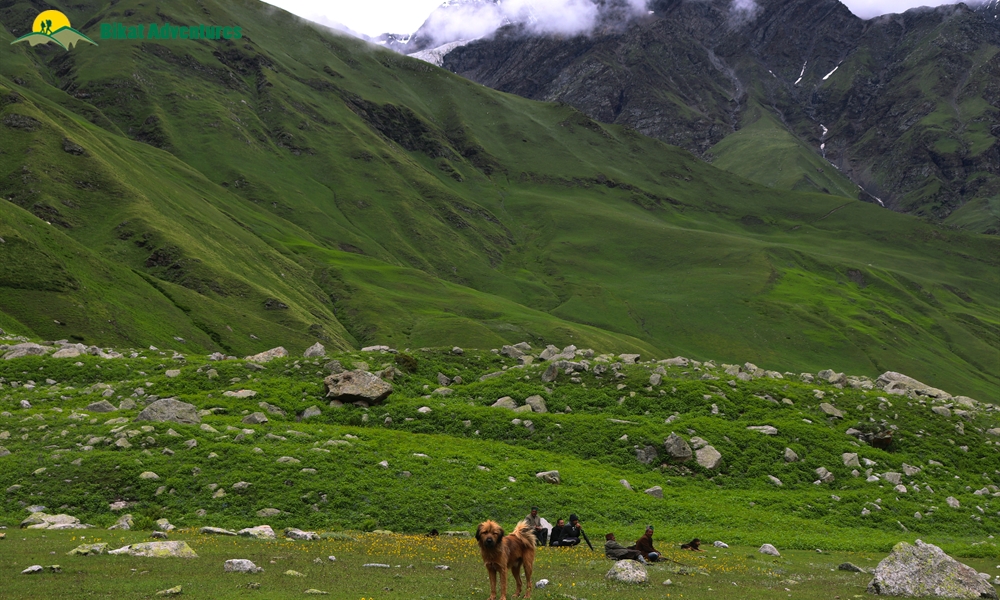 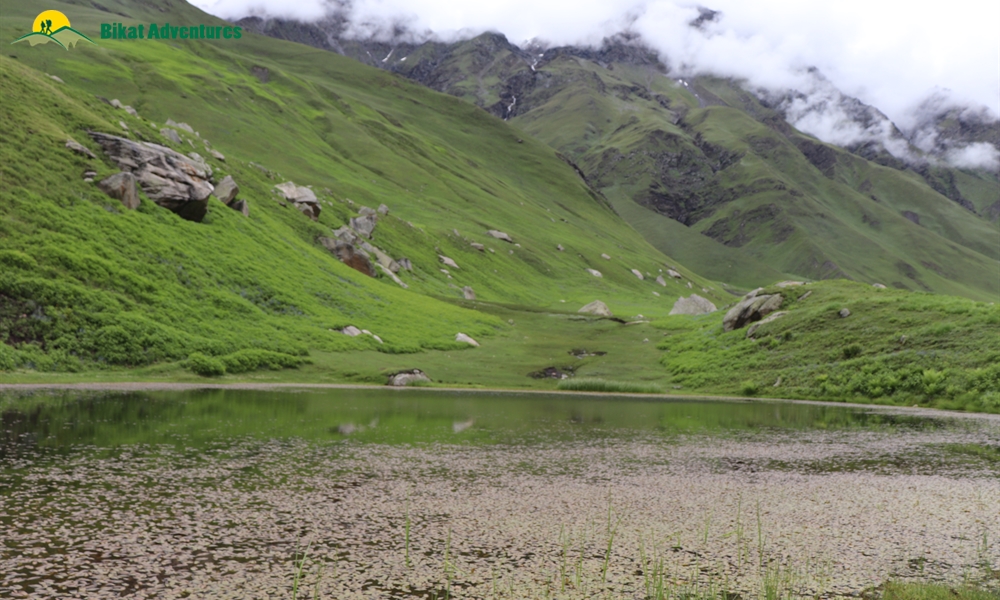 The next morning we headed towards our upcoming camp site, Pushtirang. A stream crossing was the first thing we encountered in the morning- not just one, but several. The land between Kara and Pasha Meadow was dissected with multiple streams, therefore we walked barefoot for one hour and crossed upwards of five or six streams. The trail was a bit steep today, and we reached Pushtirang at 2:00 in the afternoon, heading out for an acclimatization walk in the evening since we had to gain 2,500 feet for reaching the pass the next day. Pushtirang is such a site to behold that you can spend multiple days here. Pin Bhaba Pass is one of those few treks, where you get to camp on the river delta. Since river deltas are known to be deposited with lot of minerals and sediments, we enjoyed the view of amazing flowers here. 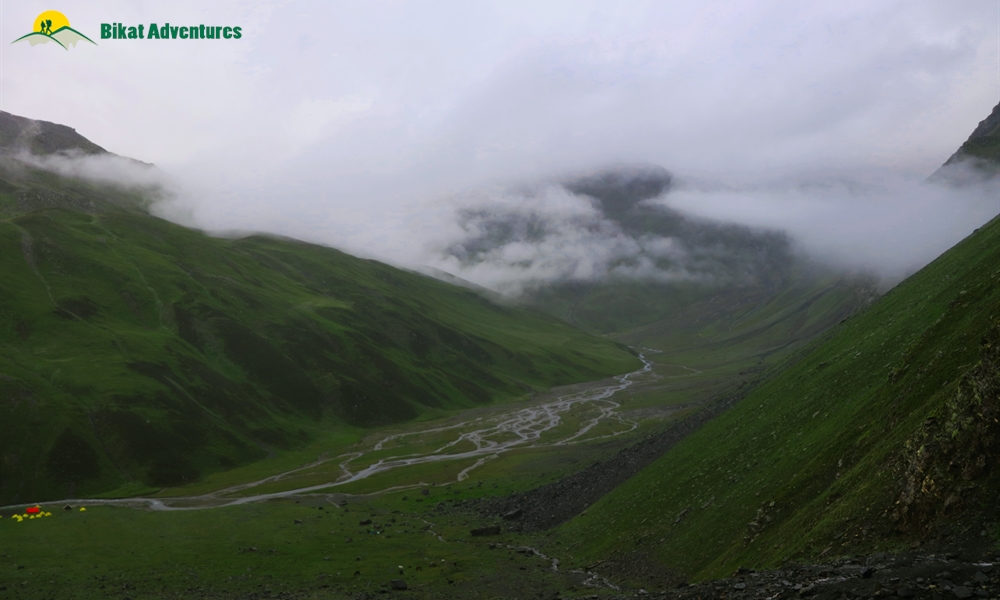 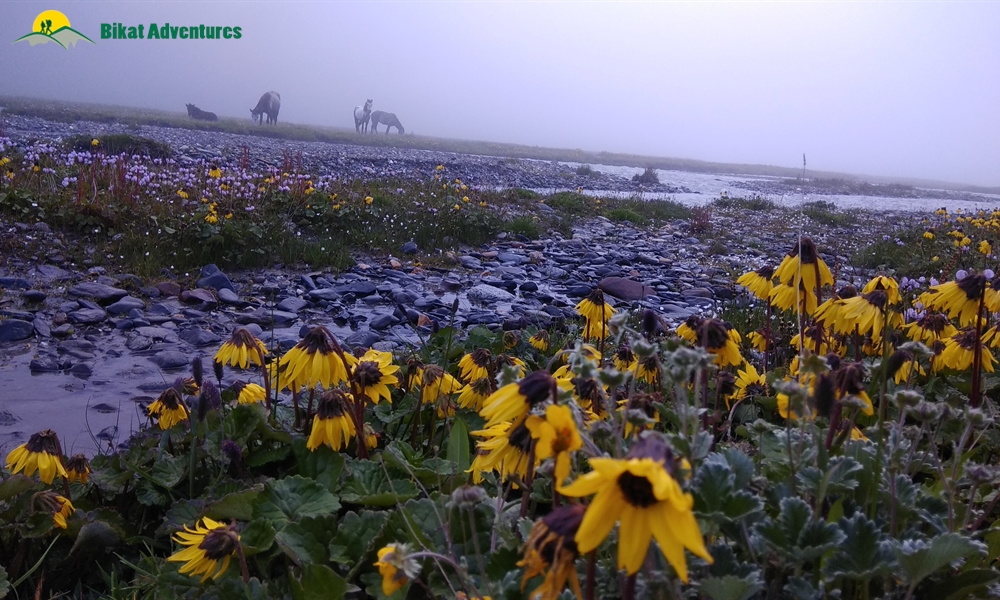 It was D-day. We got up at 4:00 in the morning and started our climb at 5:30 am. We all knew it was going to be a tough climb since we would be gaining altitude of 2500 ft. We were determined. It took us 4 hours and 30 minutes to climb 3 steep mountains and finally at 10:00 am, we reached the pass. The hugs and tears and the happy faces were proof that it was worth it all. The view from 16,125ft. was so beautiful, and none of us wanted to leave, but we had a long journey ahead of us. We started descending down with the feeling of accomplishment, but the descent was not that easy either. We slipped on the slush, fell on the rocks and walked on the long, deserted stretch of Pin Valley. Finally we reached Bara Boulder at 6:30 in the evening. It was a long day but it was the best day. Everyone was tired, but sleeping early in the mountains is never an option for me. We sang, we spoke and as the night grew darker, we slept. 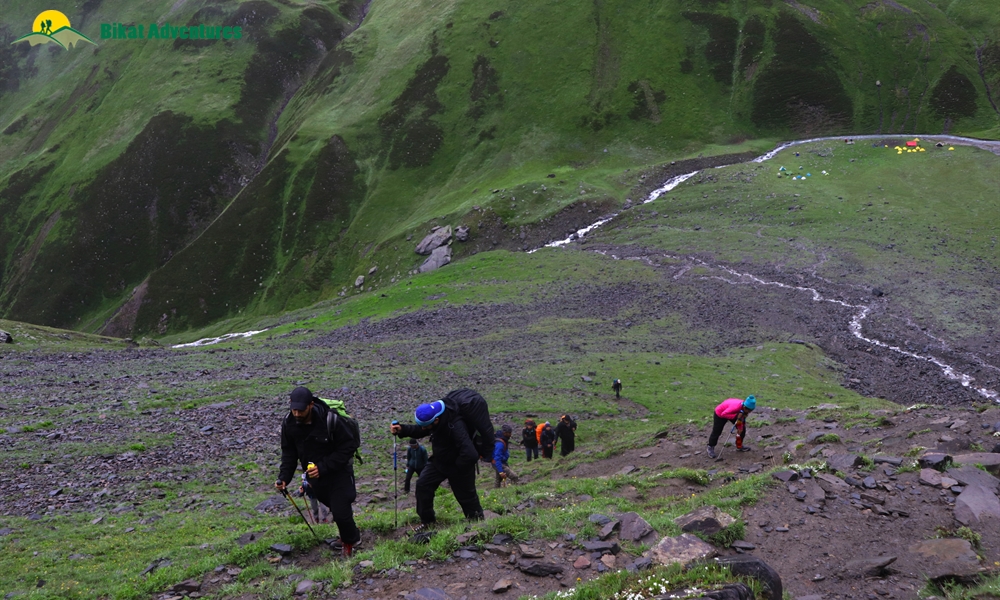 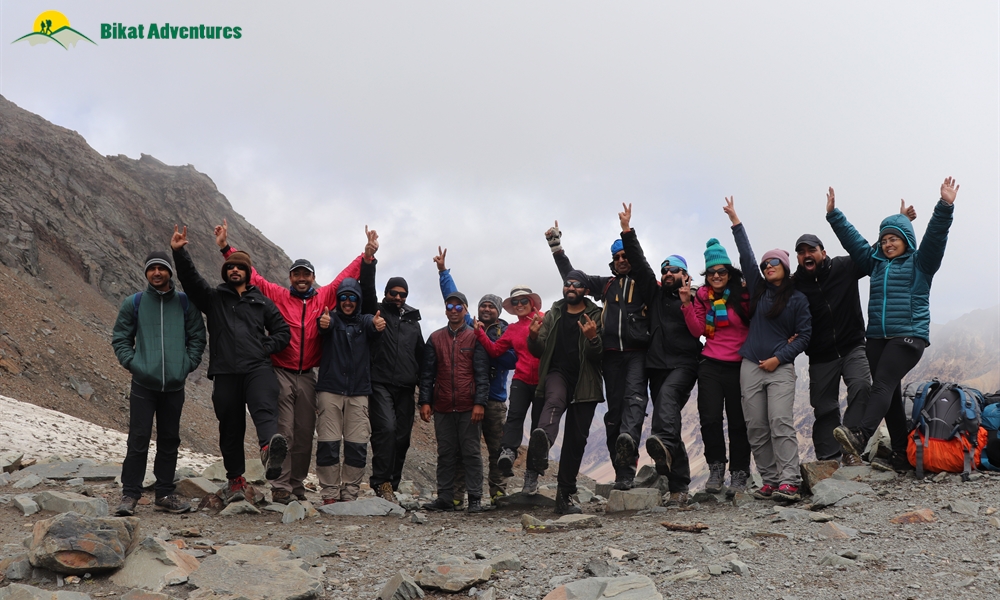 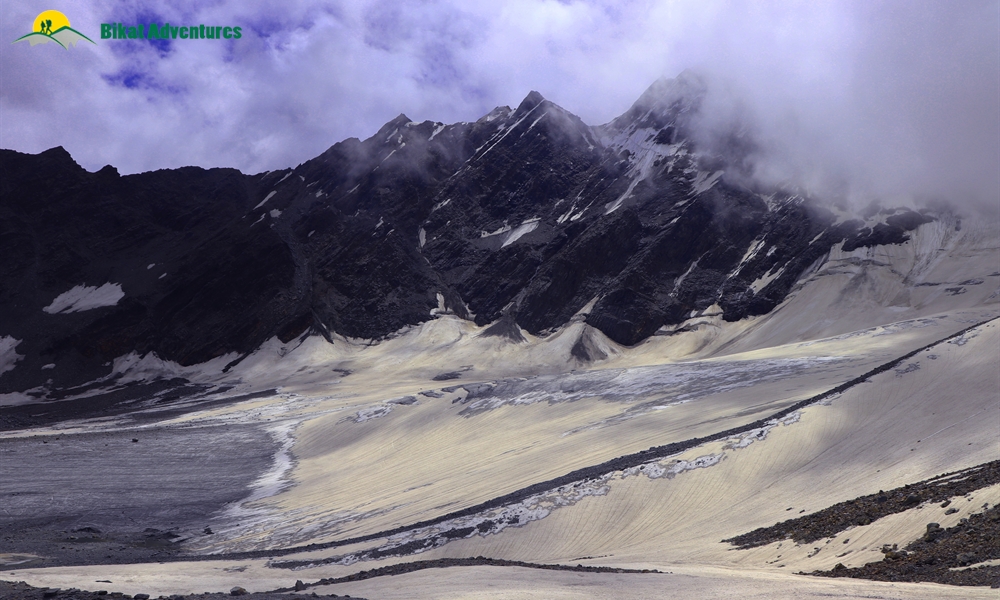 Next day was an easy walk amidst the barren mountains of Spiti, with its sun tanned mountains of red, yellow and green, and after 5 hours, we walked into civilization. There wouldn’t have been a perfect ending other than what we had in Mudh. We had rounds of singing in the dining area and explored the village in the evening, finally calling it a night with one last energizer and the cake cutting. It was awesome. 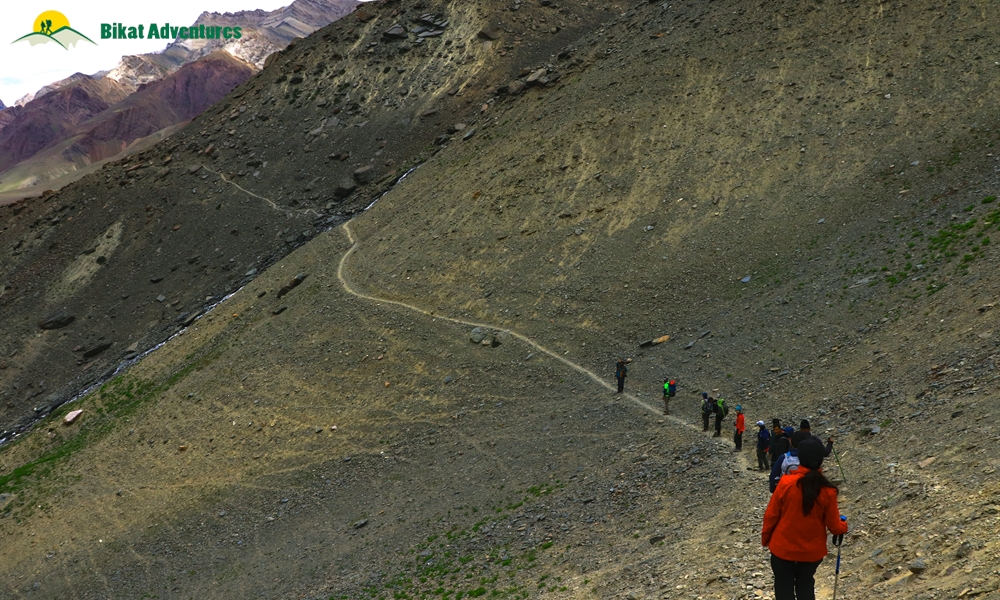 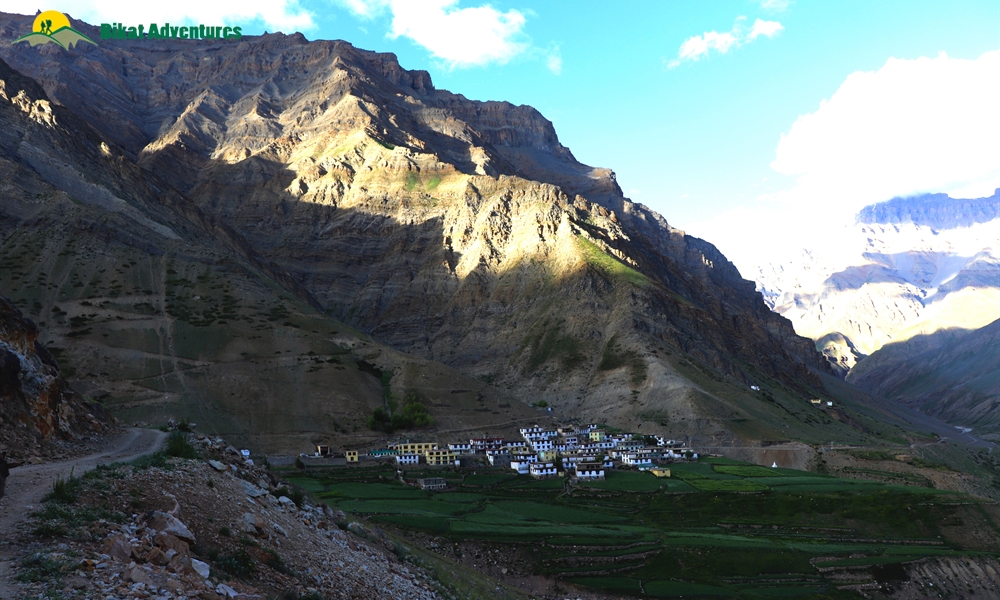 No words can describe what we felt on this trek. We had successfully accomplished 16,125 ft. of trek, we had made new friends that were going to stay for a lifetime and we had some spoken and unspoken experiences that we would now carry wherever we go. This trek couldn’t have been any better.