Perhaps my reasons for trekking aren’t too different from anyone else’s - I am in my mid-20s, work long and often stifling hours in a big city, and need a reprieve every now and then. But in the ubiquitous human search for uniqueness, I feel that waking up one morning to make a spontaneous 7-hour long bus journey to Mussorie, mounting the roof of a minibus to reach the base camp of Nag Tibba, and completing what’s usually classified as a two-day trek within 8 hours, all of this solo, must lend to my love for trekking at least a modicum of the insanity that all lovers crave.

Besides the visual delight, my favourite bit about trekking is the tunnel vision it helps me acquire, which for a while makes all of life’s worries disappear. To further concretize this tunnel vision, I tend to make targets of treks by setting myself a deadline for their completion that’s far more challenging than the time recommended, as I did in this case.

A power cut coupled with the terrible Delhi heat meant I was up at 7AM on the morning of April 22, unusually early for a weekend. It struck me that two days would be the perfect time for a quick jaunt to Nag Tibba, described as “a classic trek in the vicinity of Mussorie”, by travel writer Bill Aicken. I had little idea about the details, a crucial one being that Pantwari, the basecamp for the trek, lay 40km from Mussorie with hardly any conveyance between the two. Regardless, I was on the 10AM bus to Mussorie. While the first sharp swerve of the bus on the narrow hilly roads approaching Mussorie made some of my fellow passengers uncomfortable, it made me feel at home. By 10PM I was comfortably nestled in a dorm bed in the nippy Mussorie.

I was up at 6 the next morning. I’d got to know of the aforementioned crucial detail the previous night – a private taxi would have got me to Pantwari within an hour but, given my minimalist principles, I wanted to avoid it as far as possible. The other option, hitchhiking, seemed too tempting to skip. Nevertheless, given that I had to return late evening from the tiny hamlet of Pantwari, I had no choice but to book a taxi in advance for my return journey.

Thus, I was out on the road at about 7AM, hoping to find favour with anyone travelling towards Pantwari. Hands were stretched, heart was soaring. After getting about 15 scornful looks, finally someone smiled at me. It was the driver of a minibus packed to the brim. After confirming my intended destination, he gestured towards the roof with his thumb raised. It didn’t seem like a good idea at first, but there were railings all around the roof and even a mattress on it. Truly, it happens only in India.

My only regret about the rooftop journey is that I was too scared to pull out my phone and click some amazing shots of the valley every time the minibus took a turn teetering on the edge of the road. As per the rest, it was magic. At several points in the journey I wanted to stand up and make a triumphant Titanic-like pose, but survival instinct got the better of me. The vehicle chugged along at a moderate pace that allowed me to keep my eyes open and enjoy the scenery, all the while keeping a firm grip on the railing with my right hand. My only preparation for the trek – a jacket and a cap – helped me not freeze to death.

At about 9:30, having reached the tiny hamlet of Pantwari, I found out there was hardly any food or water available on the trail, so packed my bag with 3 litres of water and some packets of chips and biscuits (thankfully the only shop selling these was open). The day was bright and there was no chance of rain. That was pleasant news, for I was sans raincoat anyway.

Whenever I am not camping overnight, I set what I call a ‘turnaround time’ – the latest time by which I must start the descent to get back before dark – and religiously stick to it (this also happens to be my only trekking practice others can learn from, for the rest, it goes without saying, are shoddy). I am a strong trekker and back myself to summit by the turnaround time, and have never failed. Considering Nag Tibba is about an 8km walk to the summit, I determined the turnaround time for 2:30PM, and set off for the trek at 10 AM. 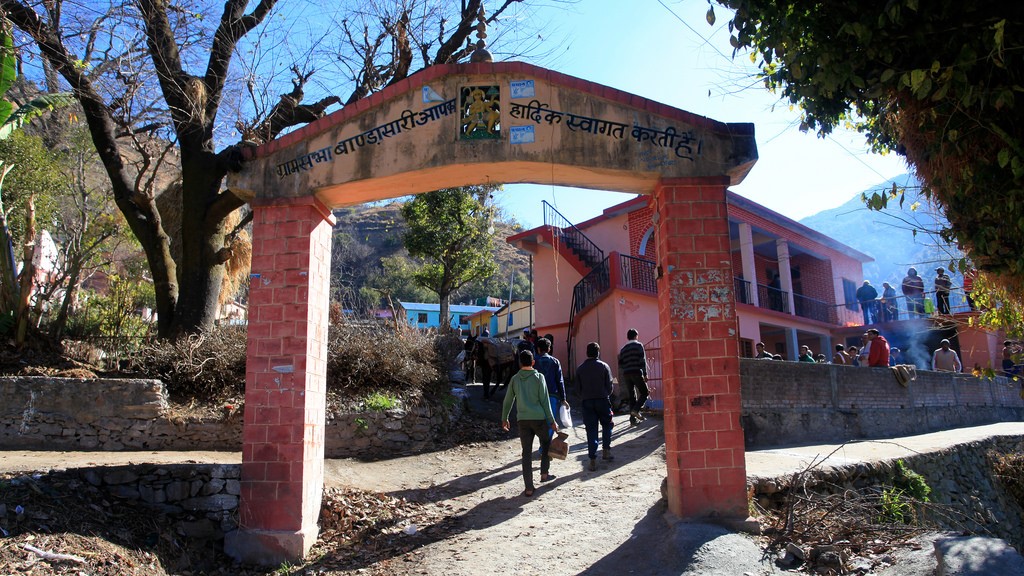 Start of the trek

Unlike comparable trails such as Triund and Prashar Lake, Nag Tibba is far less populated. There are more locals than tourists. In fact, the mules that are used by them to fetch harvest from the top might well outnumber the humans on the trail. A mule at the beginning of the trek

It’s always fun to talk to locals on any trek. In Nag Tibba’s case, it’s also essential, more so for a solo trekker like myself. It’s easy to get lost in places. The biggest likelihood lies in parts covered with leaves, such as the one depicted in the photo below. At least two different times my path was corrected by the locals 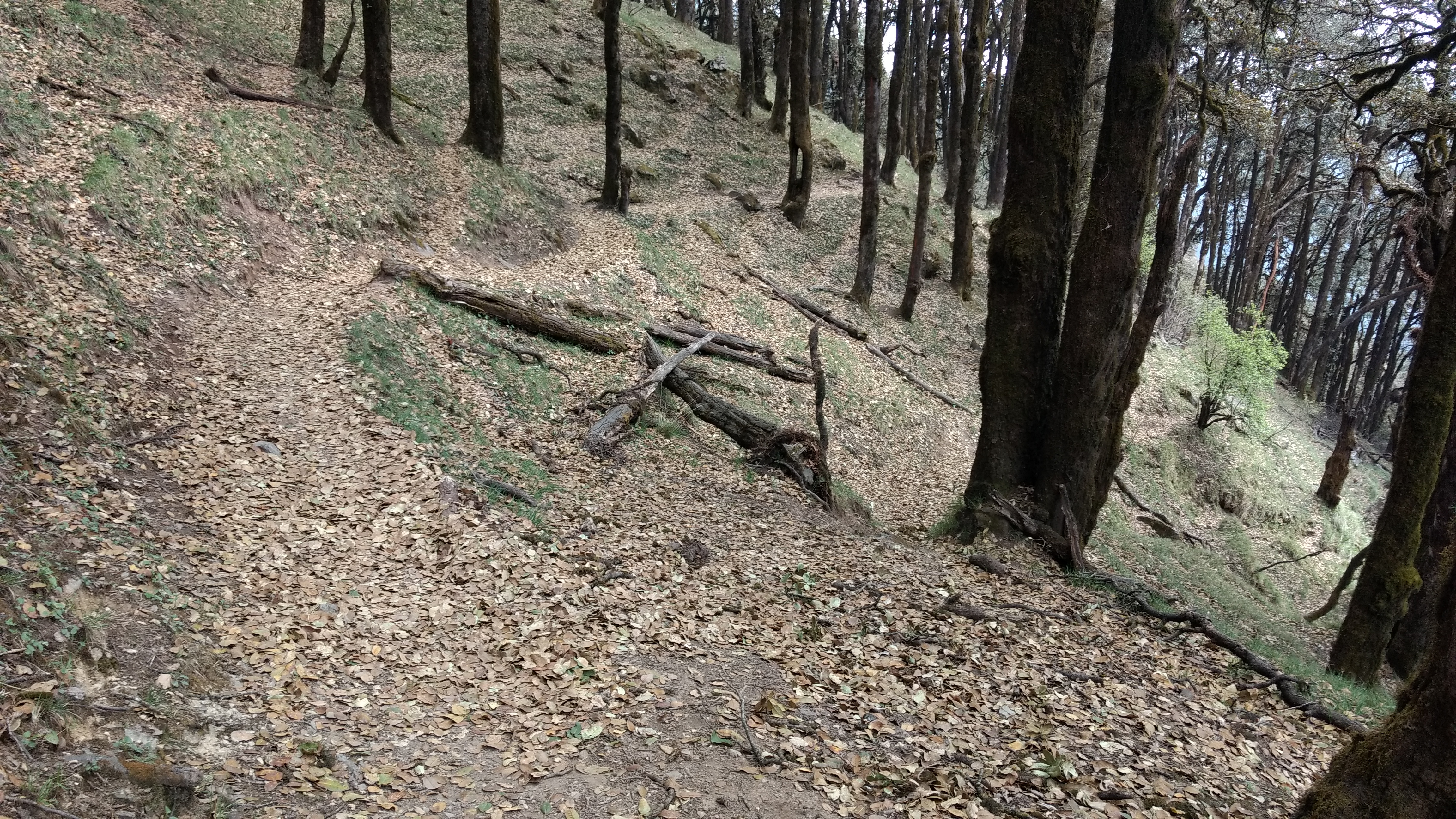 Spot the trail - it lies towards the left edge of the photo. I missed it completely andascended at a very sharp angle for a few minutes

The locals also informed me that parts of the peak are hotspots of farming where wheat and potatoes are grown. The curiously named ‘Goat Village’ is a result of goat farming that’s provided a strong boost to the local economy. 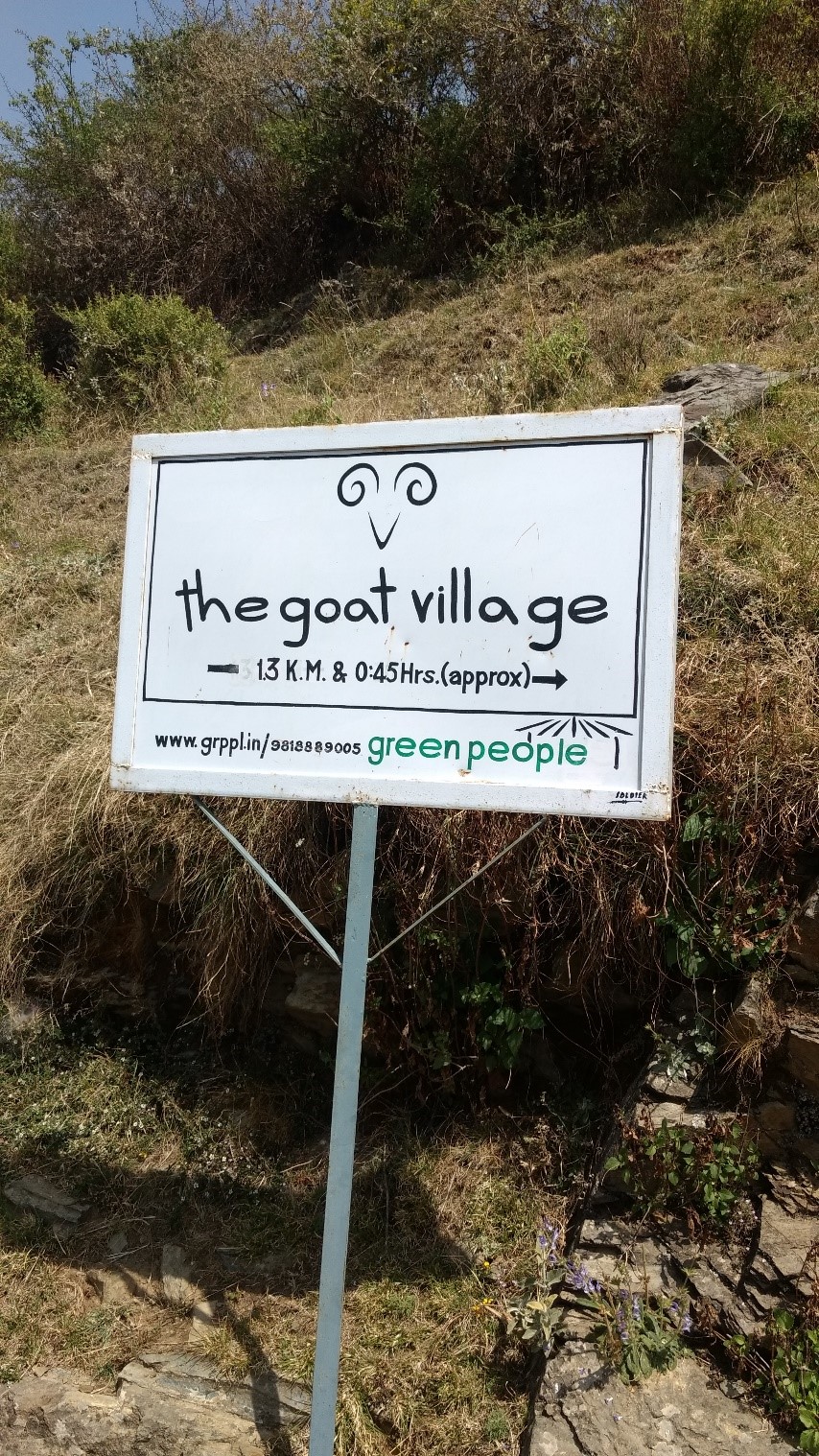 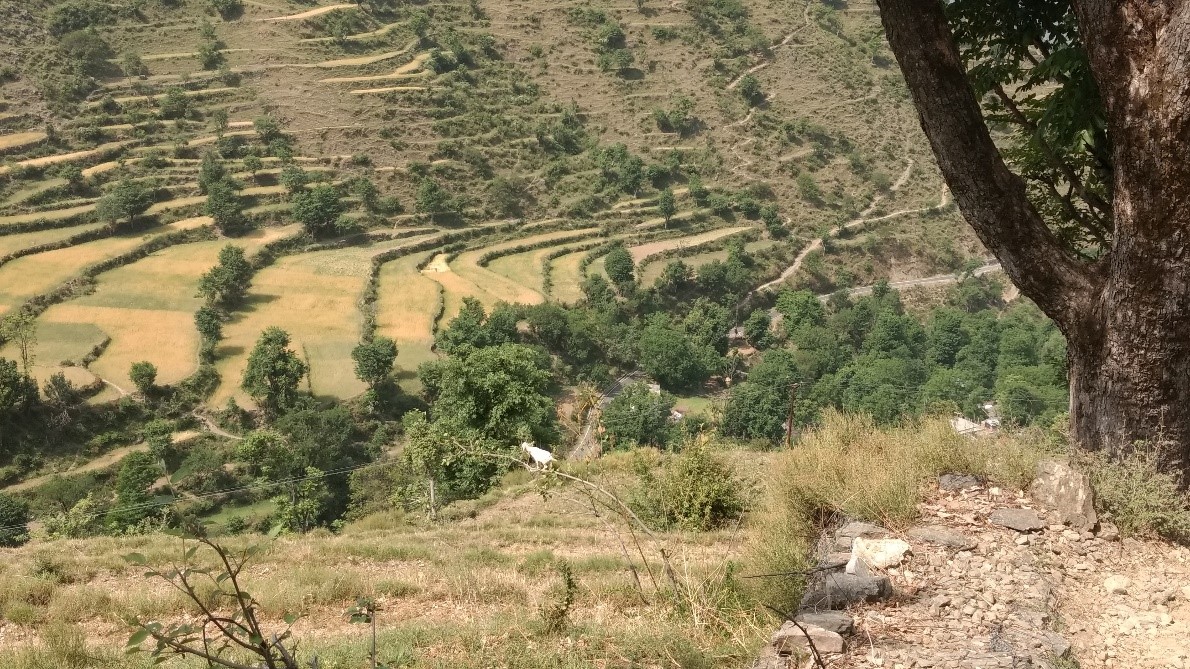 Nag Tibba is correctly classified as an easy/moderate trek. The beauty of the trek lies in its combination of rocky terrain and evenly distributed meadows. The verdant hills in the background start to appear about an hour into the trek, and soothe the urban trekker’s parched eyes throughout. 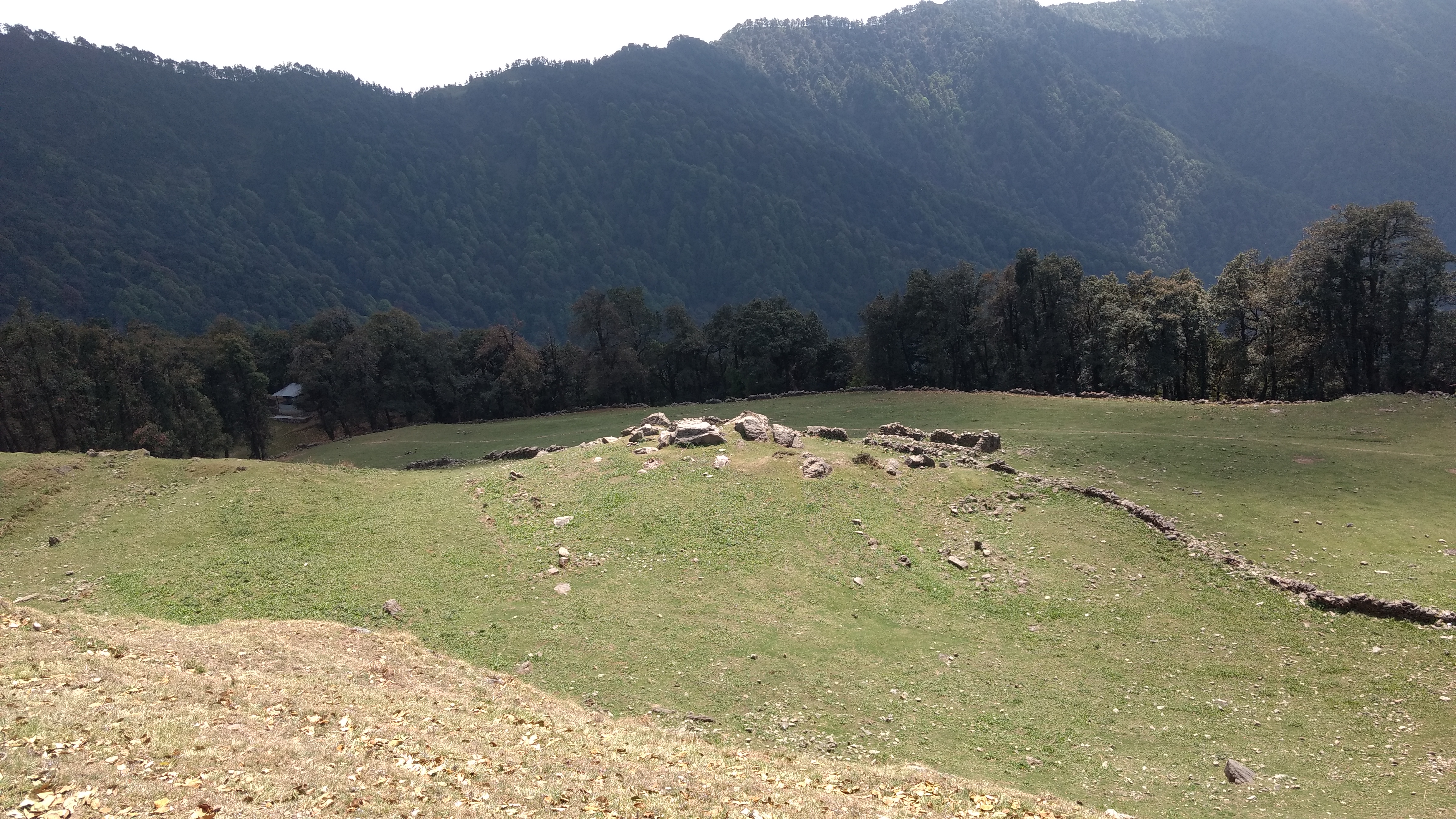 meadow with tall green hills in the background

Panorama of the hills surrounding the trek

All through the trek I’d thought that the Nag Tibba temple (pictured below) marked the end of the trek. I was at the temple at 1:15PM, and even felt a tad disappointed by the lack of challenge. But for an unprepared trekker such as myself, Nag Tibba is like a piece of exquisite music composition – it reaches its crescendo towards the very end. In what seemed like a pleasant surprise at the time, the folks at the temple informed me that the summit lay another 1.5km away, at a point named ‘Jhandi’ (after the white flag that marks the highest point). The trail ahead looked far more daunting than what I’d negotiated till then, so my legs itched 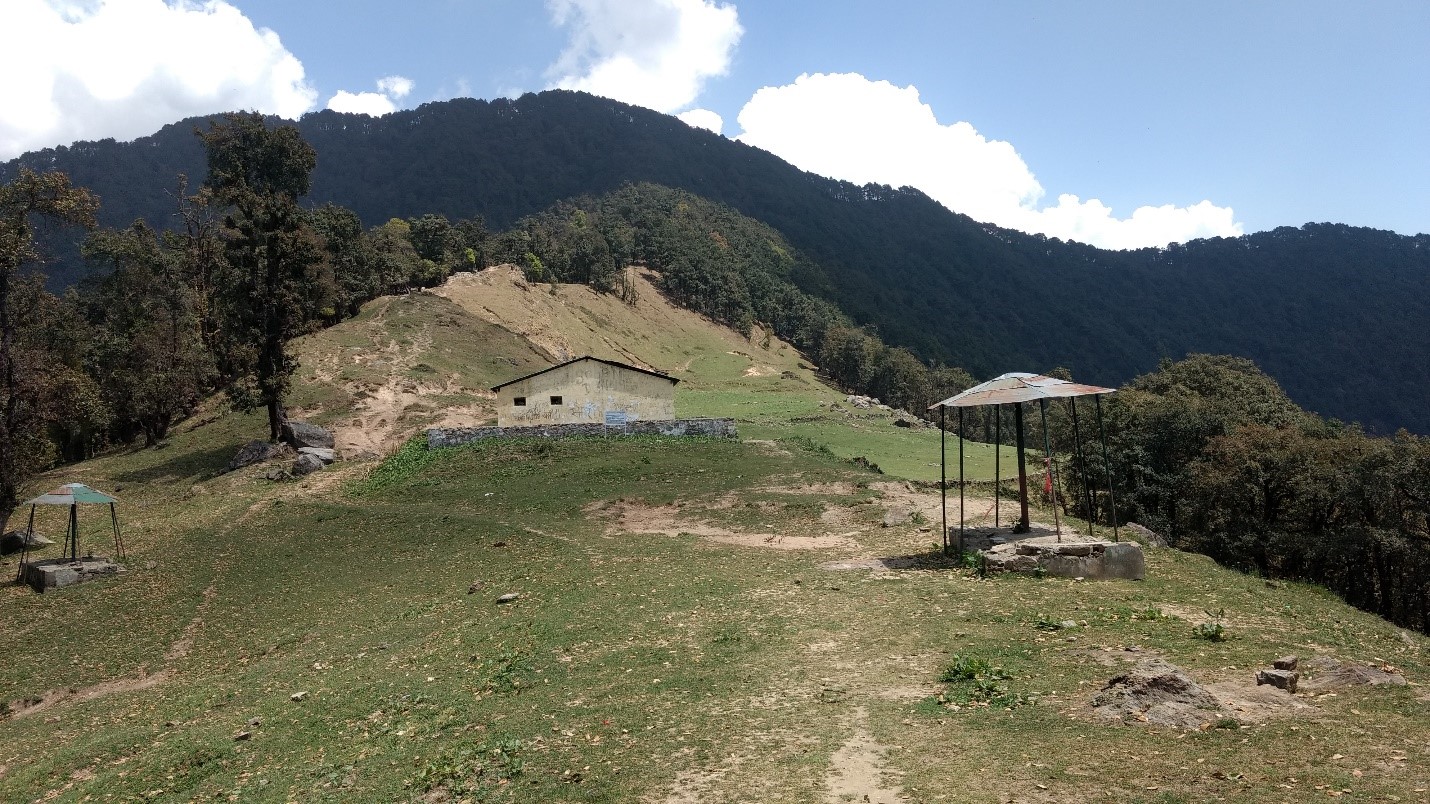 View of the summit in the background, from around the temple. The tough trail beyond the temple is visible behind the hut

I expected to be at Jhandi within 45 mins, which would have given me a perfect 30 mins at the top before turnaround time. Brimming with energy, I started the last leg with a dash, but soon realised that the trail was too steep to allow it. Worse, about 3 mins of upslope running with a 4kg backpack exhausted me. My pace slowed down and 30 mins passed with the summit nowhere in sight.

I should also grudgingly mention that I felt a tad scared beyond the temple, and maybe even missed the sight of human beings. There was not a soul around, and the forests had become quite dense. Worse, the rain gods were beginning to thunder loudly. At about 2:10PM, 40 minutes into the final ascent, my first failure at a trek looked imminent. This was right after I’d missed the leaf-covered trail and trekked up almost vertically for a bit (shown in the third picture). At one point the trail was so steep that I had to take the bag off my back and haul it over. I was completely exhausted and the turnaround time was breathing down my neck.

Not one to give up easily, I decided to push ahead for the last 15 minutes. Miraculously, I soon caught a glimpse of the white Jhandi sitting proudly atop the summit. I was there. I hadn’t failed. Instinctively, I broke into a smile, dropped the bag and sprinted to the top.

I walked on the summit meadow and lay down for a minute or two to soak in the grey-blue sky. At 2:30PM sharp, I started the descent. Victory tastes sweetest when the victor is pushed to the very end.

The summit meadow, with &#39;Jhandi&#39; visible in the background 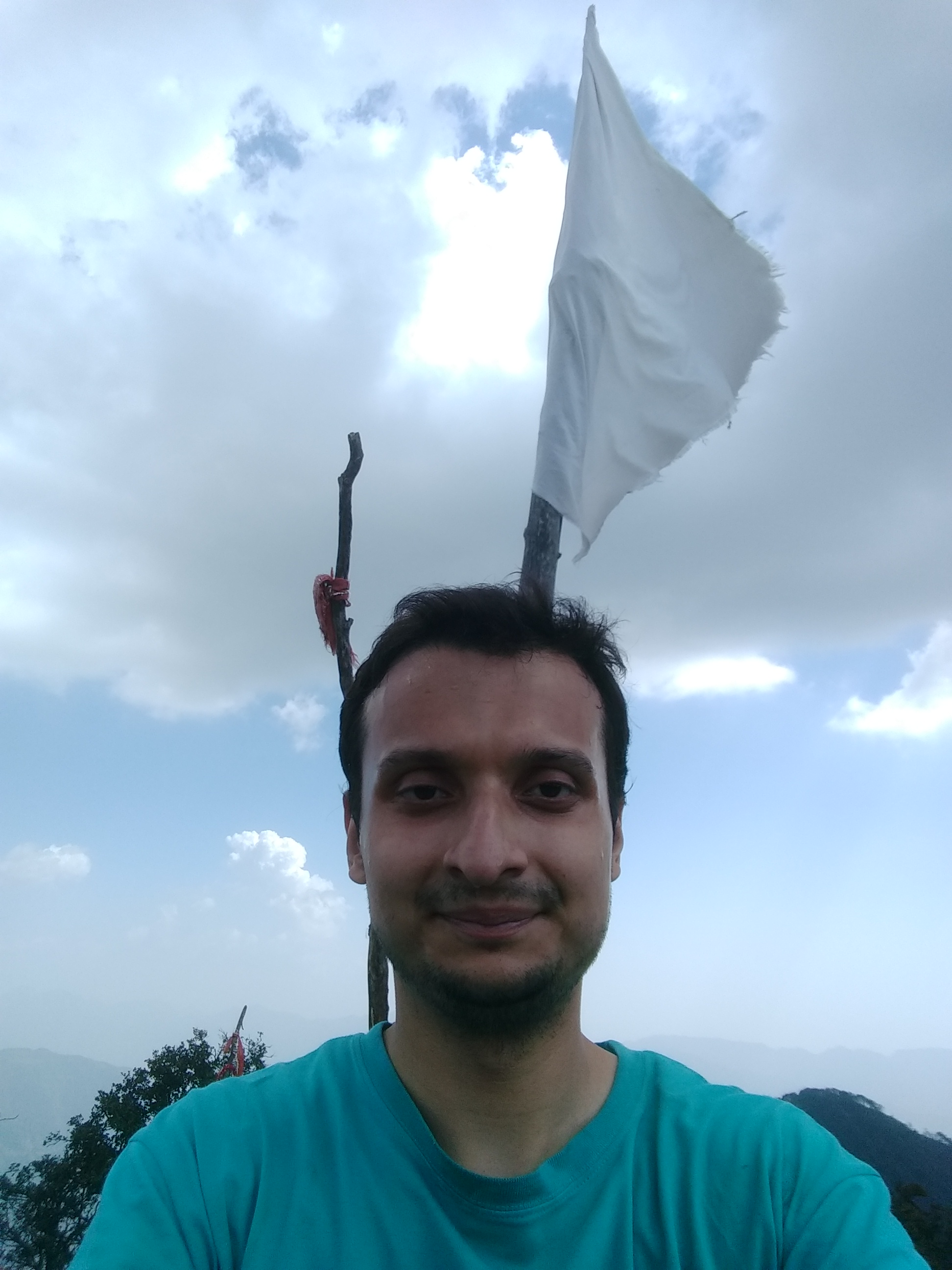 I dislike selfies, but I earned this one

By 5:30PM, I’d descended and caught the pre-booked taxi waiting for me. But for the selfie, the locals would never have believed that a rank outsider had conquered their summit, alone, and got back safely in a matter of 8 hours.

As fate would have it, my adventures on the trip weren’t over yet. The driver was going inordinately slow. Curious, I asked him to speed up a tad bit lest I miss the bus back to Delhi. No response, no change in speed. A few minutes passed when I glanced at the driver’s eyes in the rear-view mirror. They were bloodshot and he was barely awake. My mind raced back to the sight of him ingesting a powdery substance around the time we left Pantwari. Just then, he struck an incoming vehicle from the side. Thankfully, the speed was really slow. I threatened I would jump off the moving car after informing my parents, and he’d have to face the consequences of my bodily harm. The bald-faced lie worked, and I left the car as soon as it stopped.

Apparently being alone on a crowded highway is scarier than being alone in the woods with no humans in sight. There was no internet connectivity and I didn’t know how to look for a cab service’s number. I had little hopes but to my utter surprise hitchhiking worked again - this time on a comfortable seat instead of the rooftop! A generous family heading towards Mussorie had been my saviour. We passed my still-crawling cab that was threatening to hold up traffic. The driver looked more drug-addled than ever. I read the local news for several days afterward to know about the fate of the car, but came across no tragedy. I still wonder why I didn’t act to help him. But survival instinct had completely taken over back then.

Finally, I was able to catch my late night bus back to Delhi. True to life, the experience was shortlived, but the bittersweet memories live on. 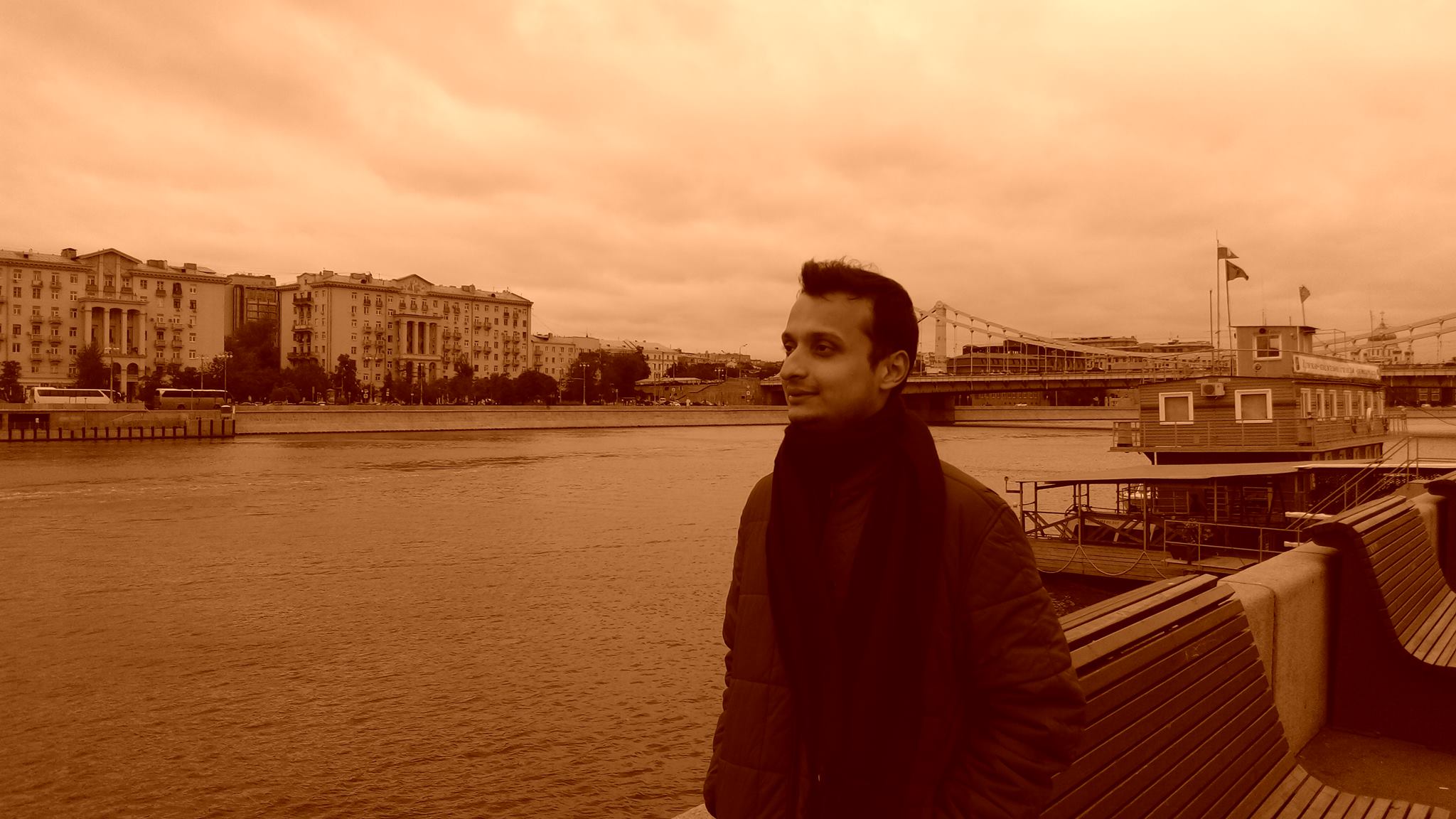 Once a stereotypical Indian middle-class lad, I graduated as an engineer and began my career by sell Read more