The FIRST AID modules provide information on caring for injuries and sickness in a backcountry environment when you are hours or even days away from definitive medical care, with focus on what is commonly encountered in the mountains. These modules only provide an overview, but are not meant as adequate instruction for beginners. While traveling in remote, wilderness areas ensure you group includes qualified wilderness medicine professionals, or get a WFA, WAFA or WFR certification yourself.

Mountain sickness is a common name for a group of illnesses seen at high elevation due to decreasing oxygen levels and atmospheric pressure. Also called altitude sickness, these affect all people, but to a varying and unpredictable degree.

As oxygen levels decrease, the body compensates rapidly by increasing its respiration rate and depth. This increases blood pH, and in order to maintain the pH balance, the body increases urination. Increased urination, in turn, causes dehydration in a body that is already challenged to maintain hydration. The body gradually acclimatises over a few days to these changes by increasing red blood cell production and oxygen circulation. Severe altitude illnesses occur when the body is not given enough time between rapid altitude gains.

Most cases of mountain sickness are seen at elevations above 10,000 ft, though observed as low as 5,000 ft also.

PROPHYLACTIC USE OF DIAMOX

Diamox, or acetazolamide, is a drug commonly prescribed by trekking operators and taken by trekkers or mountaineers going to high altitude. Although how exactly it works is still unknown, it essentially causes hyperventilation - increased frequency and depth of breathing - which is the cornerstone of acclimatisation. There is enough medical research at altitudes upto 6000m to support that prophylactic use of Diamox kick-starts the acclimatisation process.

On the other hand, acetazolamide is also a diuretic (diuretics cause increased urination), the consumption of which requires increased fluid intake of at least 5-6L/day. Often, people are unable to keep up with hydration requirements while consuming diamox, which causes dehydration, and further increases the risk of contracting altitude illness. It is also important to note that use of diamox does not preclude the possibility of altitude illness, nor will it prevent the worsening of altitude illness once it has occured. Side effects of diamox, apart from dehydration, may include tingling in the extremeties, nausea, rashes, and drowsiness.

We recommend against casual prophylactic use of diamox, unless you are flying to from sea level to high altitudes like Leh (in which case acclimatisation is not possible), because of the increased hydration demands it places in an environment where hydration is already a challenge. In addition, it is a prescription drug, and if you do choose to take it, consult your doctor and get a prescription. Acetazolamide must strictly be avoided by people consuming corticosteroids, diabetes patients, people with decreased renal function at sea level and those with sulphonamide allergies because of the adverse reactions it produces in combination with these conditions and the drugs used to treat them.

AMS is the most common illness experienced at high altitudes. It can affect people with varying severity depending upon rate of ascent, highest altitude reached and individual physiological factors. The onset is gradual and easy to confuse with other conditions like dehydration or hyponatremia (low sodium levels).

HACE is basically the progression of the cerebral symptoms of severe AMS. It leads to inflammation, increased intracranial pressure and accumulation of fluid in the brain.

HAPE is a progression of AMS in which fluid accumulates in the alveoli and membranes of the lungs, which results in decreased pulmonary function. Easy to misdiagnose as pneumonia, HAPE is the most common cause of non traumatic death at elevation. 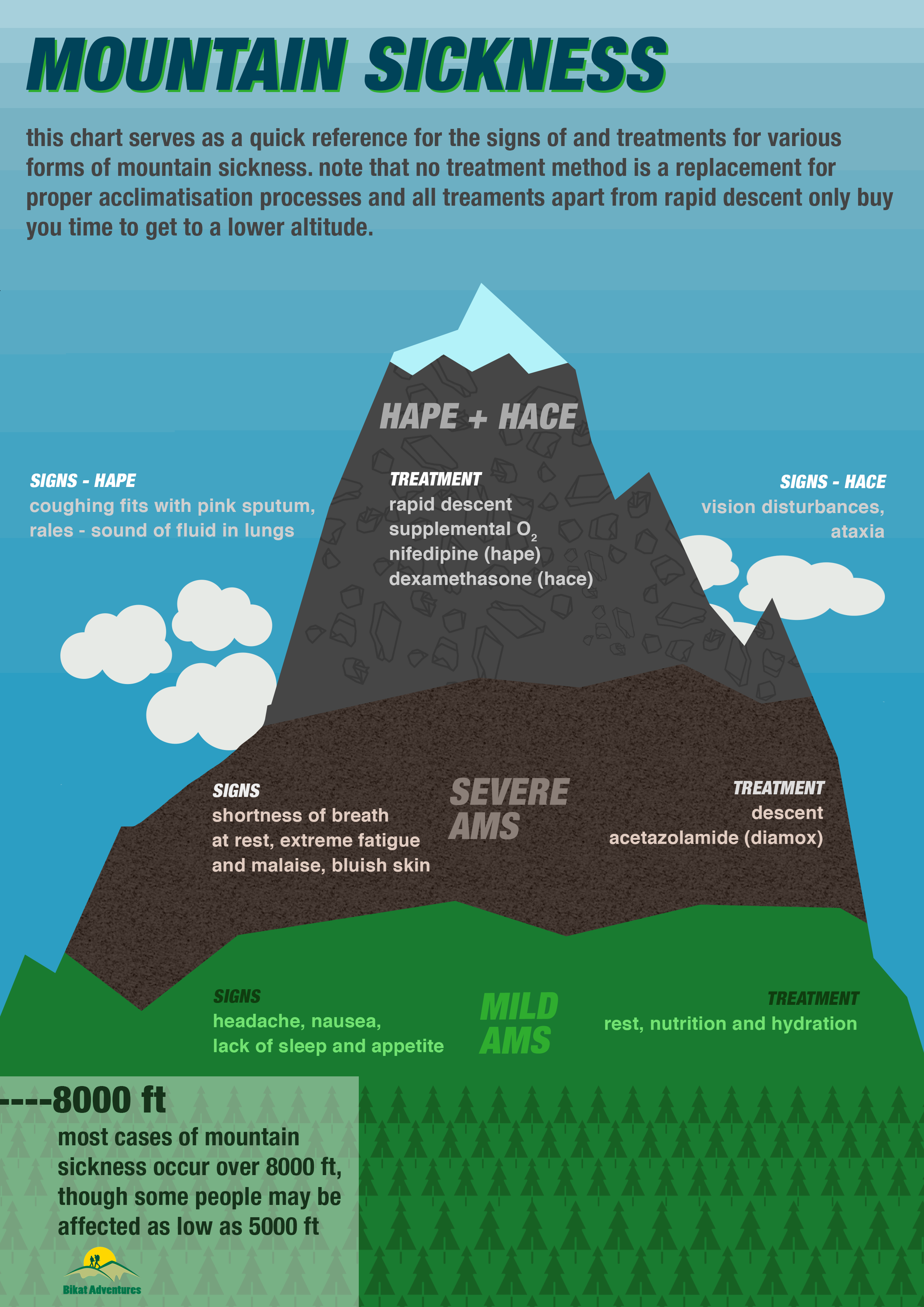