This blog is a little different from our other ones. It was written jointly by members of our exploration team, Sarthak and Cambria, each with their own voice and perspective on their first adventure together to Ghepan Ghat, a gigantic, neon blue glacial lake they weren't sure existed. Find Sarthak in the bold font and Cam in italics. 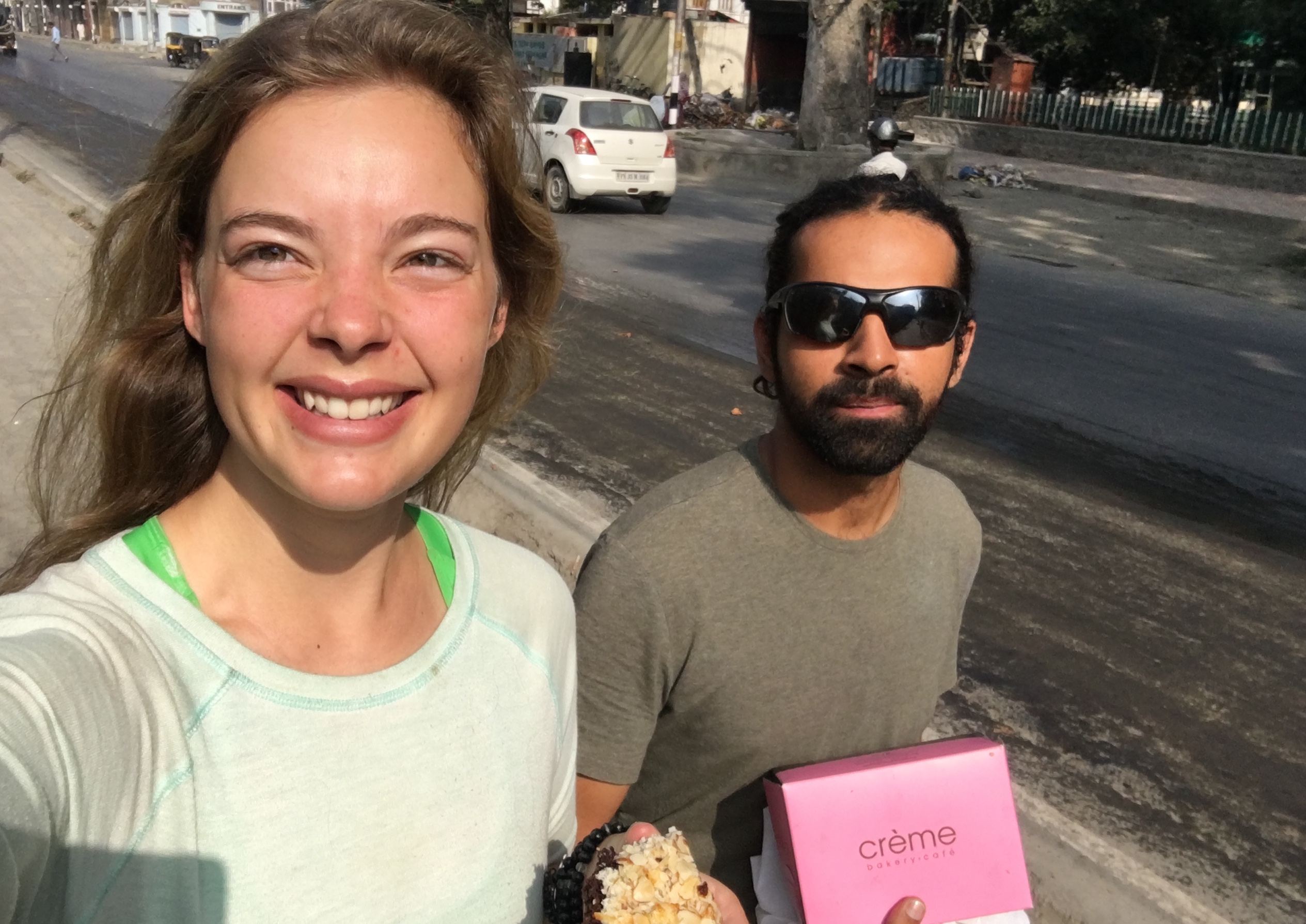 I have to admit, I was a little apprehensive about going on the recce to Ghepan Ghat. It was my first exploration trip since returning to India and my second one ever in my life- and I was doing it with almost a complete stranger.

We had met once before, a year ago, when Cam was working with Bikat as an intern, and I was still leading groups.

And by “met,” for clarification, he means that we made eye-contact maybe twice across the desk we shared for about 45 minutes. I honestly can’t even remember if we said hello, but here we were now, with 20kg packs, prepping to go on our first of many exploration trips for the season.

I was staying at a friend’s place in Manali, and Cam was at the Bikat house in Jagatsukh. When I went to visit the morning before we were due to leave, Cam bombarded me with questions I didn’t really have answers to.

“When are we going? Who’s our guide? When do we get ration?”

Reasonable questions, if you ask me.

Fair enough, but I thought we should just go with the flow.

Off to a great start.

Also, speaking of good omens (sarcasm), our bus gave us the great privilege of running after it down the crowded main road of Manali after it drove straight past the bus station, clearly not caring whether we made it or not.

We were going to hike to Ghepan Ghat - a lake in Lahaul that I had read a couple of blogs on the internet about. When I checked it out on Google Maps, I saw it was bigger than the frequently-visited-by-tourists Chandratal in Spiti, so I kept pestering Ritvij (our boss), for us to plan a trip there. I had a fair idea we might not find a guide for that trail, and we definitely would have to do it in a self sufficient manner - which meant we ended up carrying a lot of dehydrated pulao and watermelon. I also carried all the camping equipment, and Cam participated by carrying a lot of questions and doubts.

“Will we get there? Do you know the way? How many days will we take?” 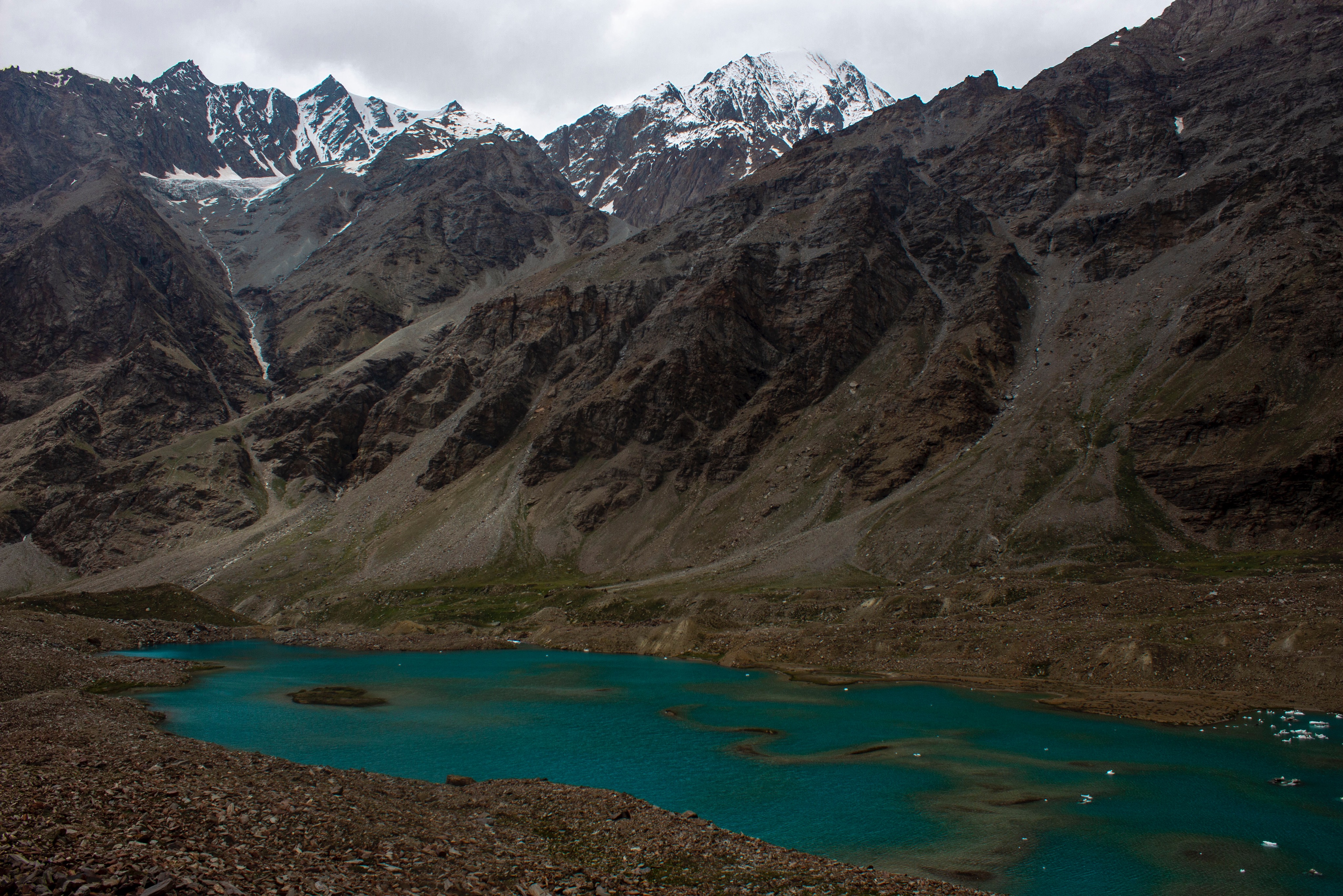 I feel slightly attacked here, particularly because I carried my fair share of weight as well, including all of the camera equipment. Anyways… he was right about not finding a guide. Turns out, when we reached the village of Sissu that serves as the trailhead for Ghepan Ghat, we had trouble even finding a local that knew about the lake we were trying to get to.

We started to wonder, does this place even exist?

Cam started to wonder. I knew it did. We got to Sissu late in the night, after enduring the typical 4 hour, peak Manali season traffic jam at Rohtang Pass. Over dinner, we started getting to know each other. I learnt Cam drinks only mineral water, and does not like the taste of kerosene in her food.

Just for the record, I’ve had Delhi belly twice in my life since coming to India, and if mineral water is what stands in between me and that unfortunate situation, I shall choose my beverages accordingly. And no, I do not, in fact, enjoy the taste of kerosene.

Finally though, we managed to find a guy that could at least give us some information about where to start and the general idea of the route. Bags packed to the brim, the two of us set off in a car the next morning to where the trail begins. He didn’t really give us any information I didn’t already know, but it’s always heartening to hear a local give you validation and encouragement that you’ll figure it out on your own. We began following an irrigation channel from where the car dropped us off, but strayed soon after when we spotted a gaddi and his flock a little further down the valley.

We decided to pay him a visit, and were rewarded with goat milk chai - Cam’s first time. He said he’d heard about the lake, but hadn’t personally been there because it was too far away. His apprentice and companion confidently informed us the only campsite with a water source close enough was a couple of kilometres up the valley. I decided to place blind trust in this knowledge, and after a short one hour hike, having covered 4 km, we set camp for the day. 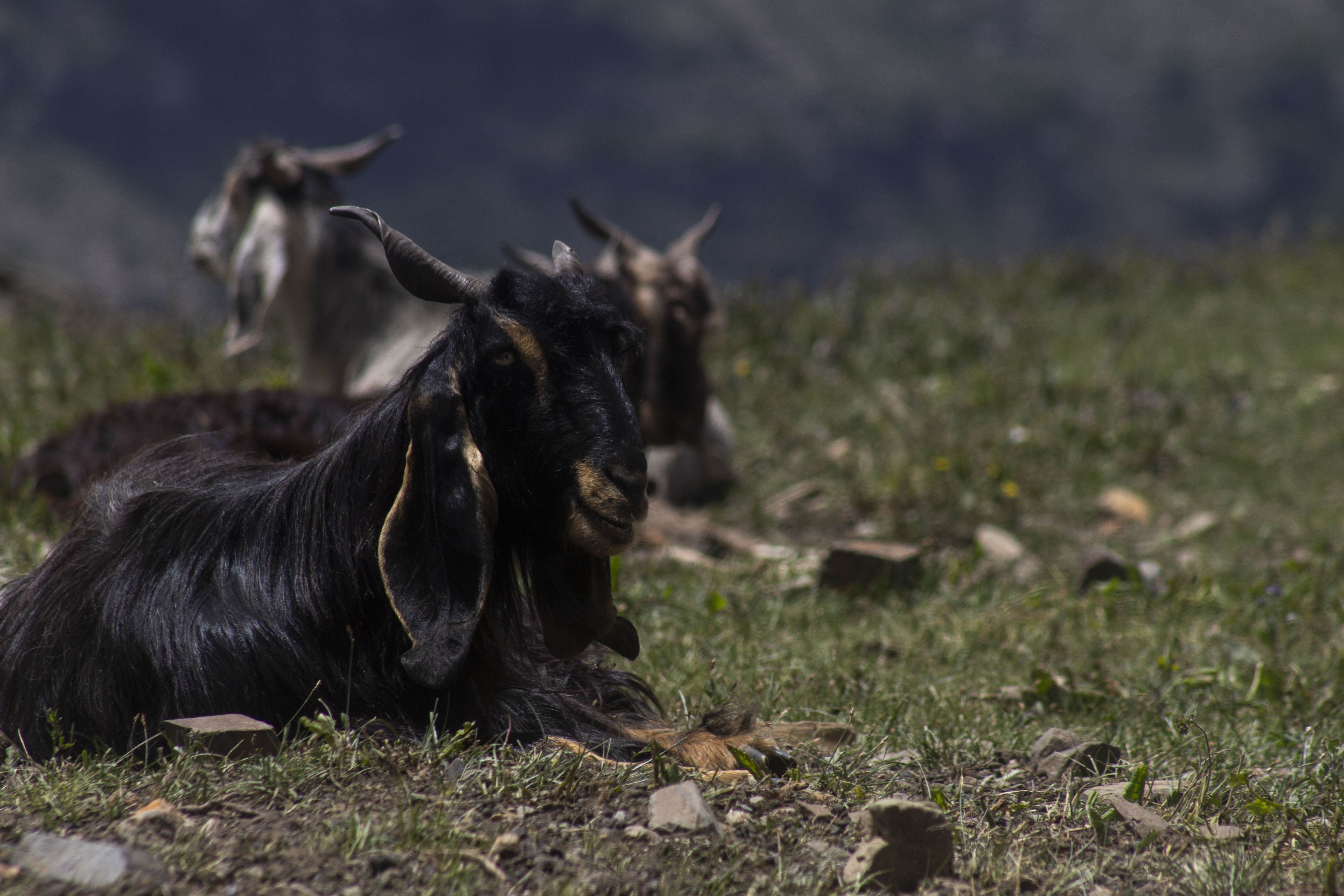 First: goat milk chai is one of those things you never knew you were missing in your life until you realize it exists and taste it the first time. Would highly recommend.

Second: While ridiculously far away from the lake we were supposed to get to the next day, that first campsite we found was pretty spectacular. Old stone shepherd huts atop a meadow ridge, completely exposed to show the massive valley in every direction.

Unaware of the insane day to follow, we spent the time till sundown perched by a nearby stream, taking sips and testing our aim by throwing rocks at targets.

I took on culinary duties - frustrated in the night about the water taking too long to come to a boil, I realised the next morning I hadn’t turned the burner all the way up. Small details. As we were getting ready for our day hike to the lake, our tent was attacked by a huge flock of sheep and goats, trying to get their hands on our leftover oats. While Cam had a good laugh, I ran around the meadow trying to chase them away.

Half an hour after we started hiking, we came across a stream. Another ten minutes later, we came across another one. And another one five minutes away. There clearly was no shortage of water, and I cursed myself for succumbing to the shepherd’s apprentice. We got delayed by an hour trying to find a way across the last stream. I finally became impatient, and executed a series of sketchy boulder hops to get across it. Cam did not follow suit. 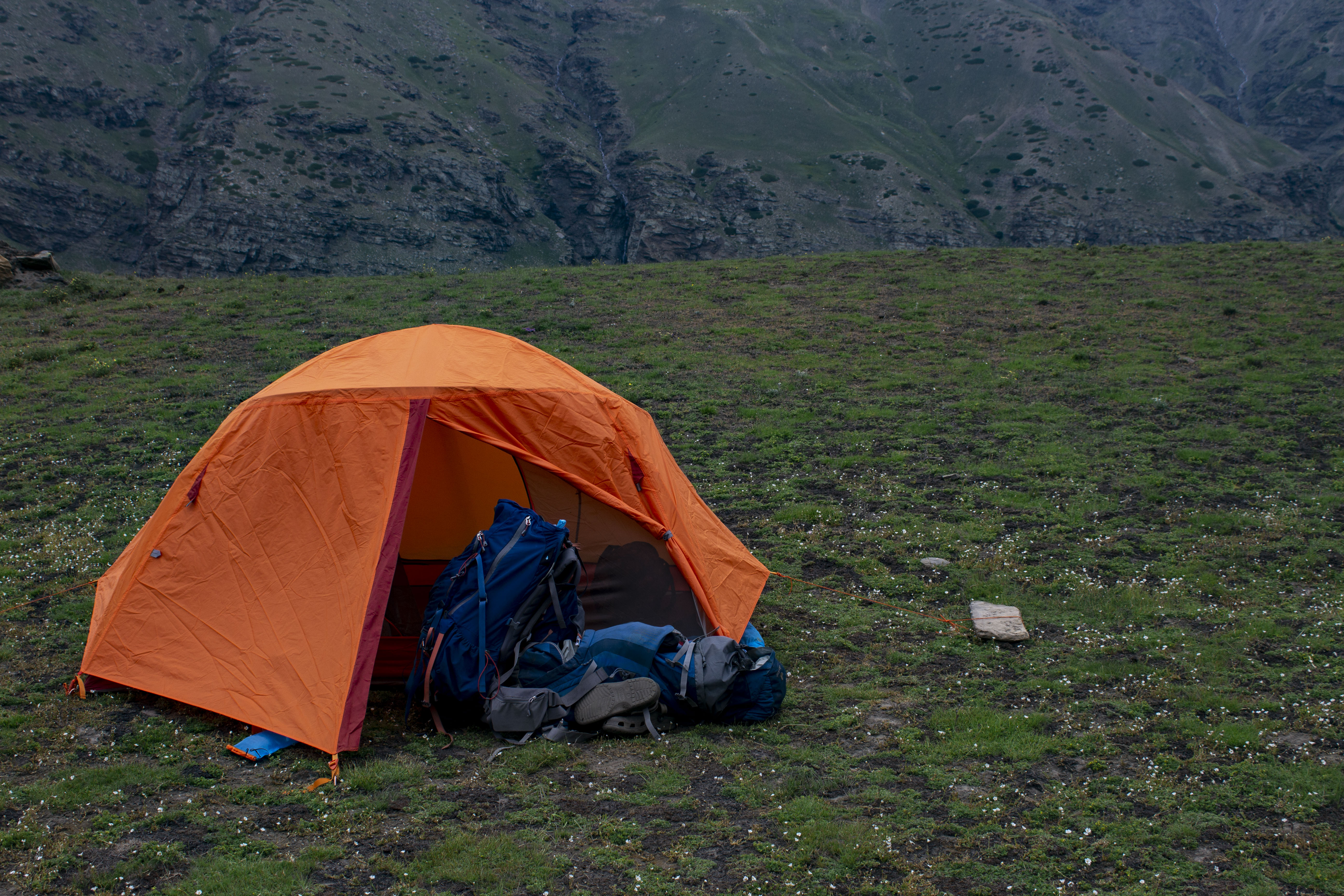 As much as drowning sounded like fun, Sarthak’s way was a bit sketch for my tastes, so I spent a while looking for alternatives before gritting my teeth and taking a flying leap over the raging water.

We hiked eternally, slowly but surely inching closer by the hour toward where the GPS had the lake plotted on the map. Three kilometers… seven kilometers… nine...  By the tenth, I was a bit worried, as we had only carried daypacks, and still had to return the same distance we had made all the way back to our camp. Not to mention, we hadn’t even found the actual lake yet.

Our energy was noticeably draining by the eleventh kilometer, and we had now left the meadows behind, with the terrain now obviously changing into the endless pre-moraine ridges that announce the arrival of a nearby glacier.

I kept glancing at the Garmin to gauge how far the lake was - 1 km as the crow flies .. 500m … 400m - I found my second wind, only to see Cam starting to lag behind. I stopped to let her catch up, a rare occasion, since most often I have to struggle a bit to keep up with her. I told her the lake was now 300m away - she didn't seem to believe since all we could see was just another hump.

As I came up the final hump, an unreal, sort of photoshopped, neon blue filled up the horizon, surrounded by huge walls of rock and ice. There it was - Ghepan Ghat - complete with icebergs and an island.

I knew we were there before I saw the lake myself. One hump above where I stood, I could see Sarthak crack a grin so wide it could only mean that we had made it. He motioned me to climb 30 seconds more, and despite shaking from the long route we had taken (during which, we realized, we had completely forgotten to have lunch), I began to jump up and down at the sight of this electric-blue lake.

I told you it exists.

It does, in fact, exist.

If you enjoyed reading this, you'll love watching the first episode from our new VLOG series, Tales from the Trail, below.